A couple weeks ago, Jules called me up and gave me the news. “Well,” she said, “my thyroid numbers are now completely in the opposite direction to where my doctor says I have HYPERthyroidism, instead of hypo.” Being a husband who loves his wife, I immediately assumed this meant she was going to die and I started worrying. “What does that mean? What do we need to do about it?” Her answer? “He said it can happen after having a baby. They’re gonna keep an eye on it, but for now it just means I don’t have to avoid gluten.”

I swear I heard a choir of angels singing in the background. I can really start cooking with bread??? Really??? I mean, Jules ate bread and gluten and stuff while she was pregnant, but she was so sick all the time it was usually just toast, bagels, English muffins – stuff like that. But now, a green light to actually do some cooking? I was so excited. And the first words out of my mouth? “I can make panzanella!” 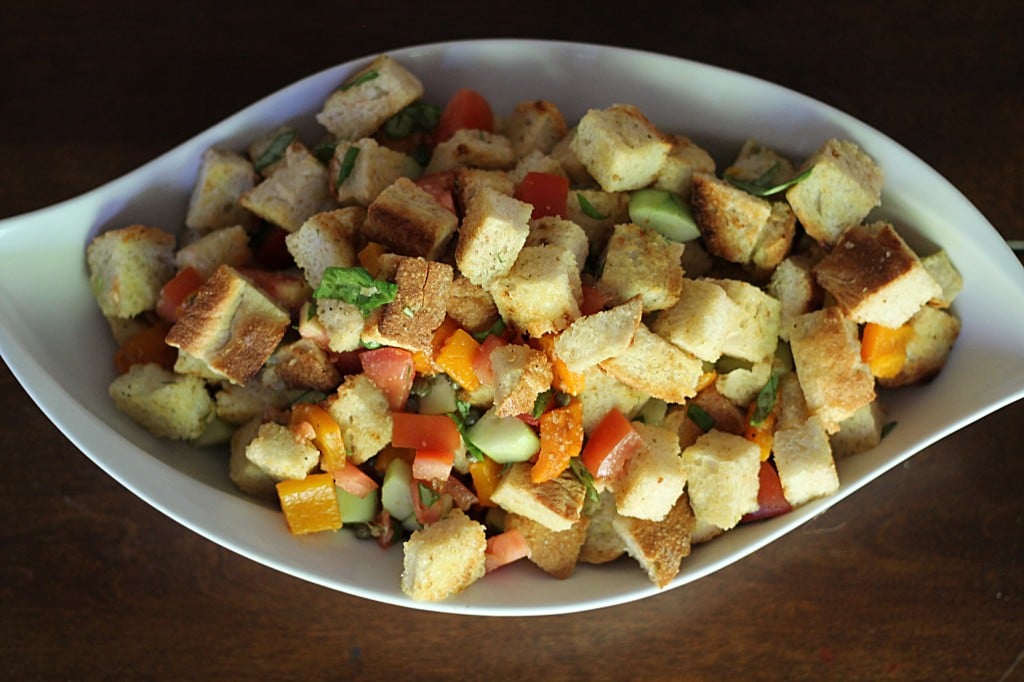 Panzanella is one of my absolute favorite salads, but I’m sure it’s obvious that it isn’t quite gluten-free-friendly. This dish is a humble salad, born of necessity. It was a way for mothers to use stale bread before it went bad, and it’s now a staple of Tuscan cuisine. I love dishes like that – dishes that have carried through generations, and are treasured because of it. My version of panzanella uses fresh sourdough bread, as opposed to day old ciabatta. I also dress it with a vibrant, citrusy vinaigrette, which makes this salad sing, all summer long. You’re gonna dig it. Here’s what you need: 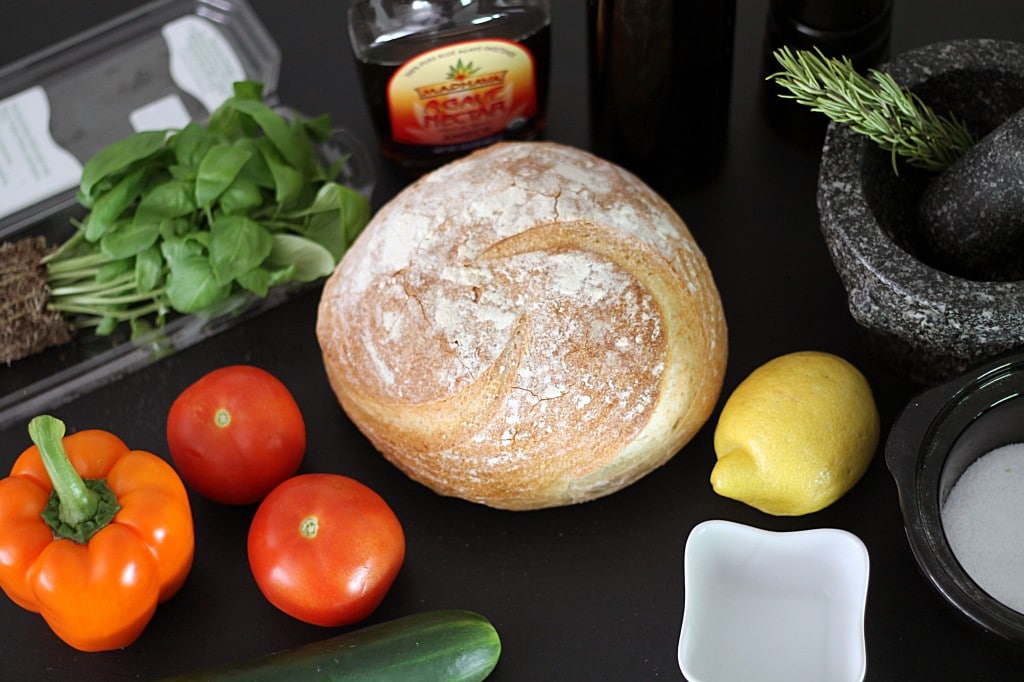 Since we’re using raw garlic in the dressing, we’re going to make that first. This will give the acids in the lemon and vinegar time to tame the harshness in the garlic. I prefer using a mortar and pestle to make this dressing, but if you don’t have one you can chop everything up really finely. A mortar and pestle just helps release the oils in stuff and gives it a more rustic feel. But don’t let not having one keep you from making the salad – it will still be good.

So, peel and roughly chop the garlic, then put that into your mortar and pestle with the rosemary and about 2 tsp of lemon zest. Roughly mash that together. 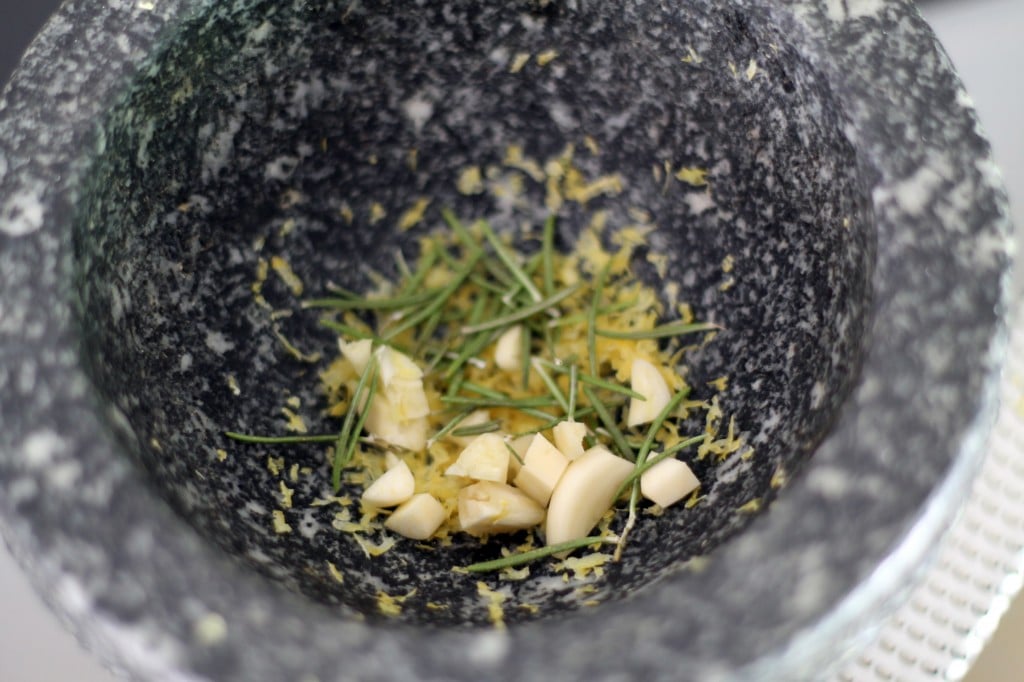 Add the juice from the lemon (careful for the seeds while squeezing the juice out) and the vinegar, and continue mashing to work the acids into the garlic. Add the oil, agave, and a pinch of salt and pepper. Stir together and set aside at room temperature while you make the rest of the salad.

Besides the dressing, the only other things that take some time are the bread and the bell pepper. Let’s talk about the bread first. 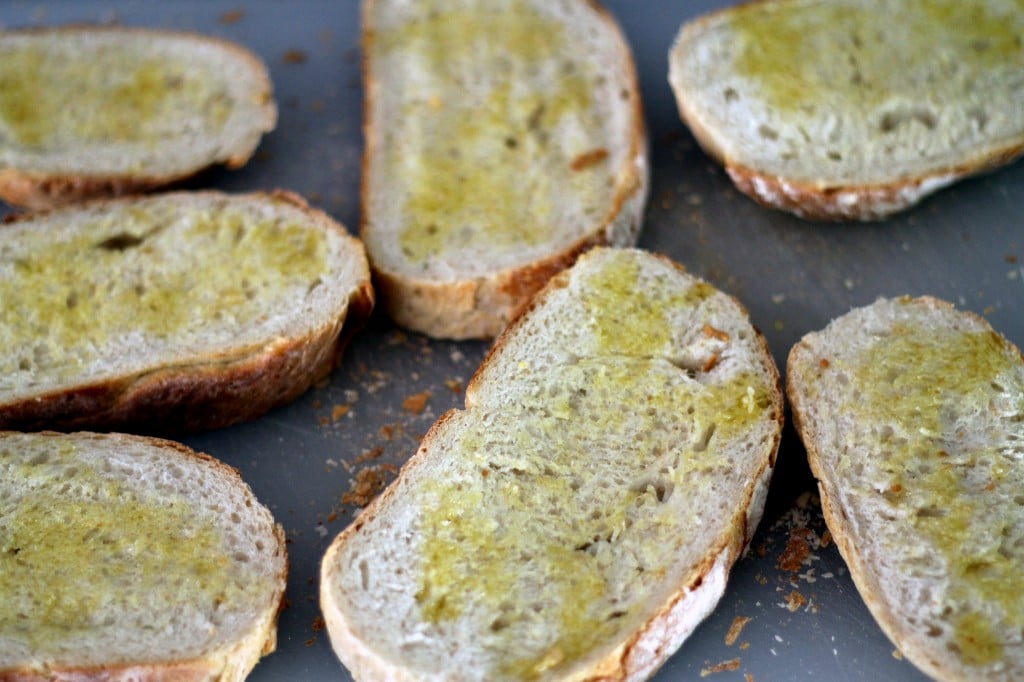 Slice the loaf of bread into pieces about 1 inch thick, and brush olive oil on each side. Next, grill the bread on high heat so it gets toasty, with awesome grill marks on it. 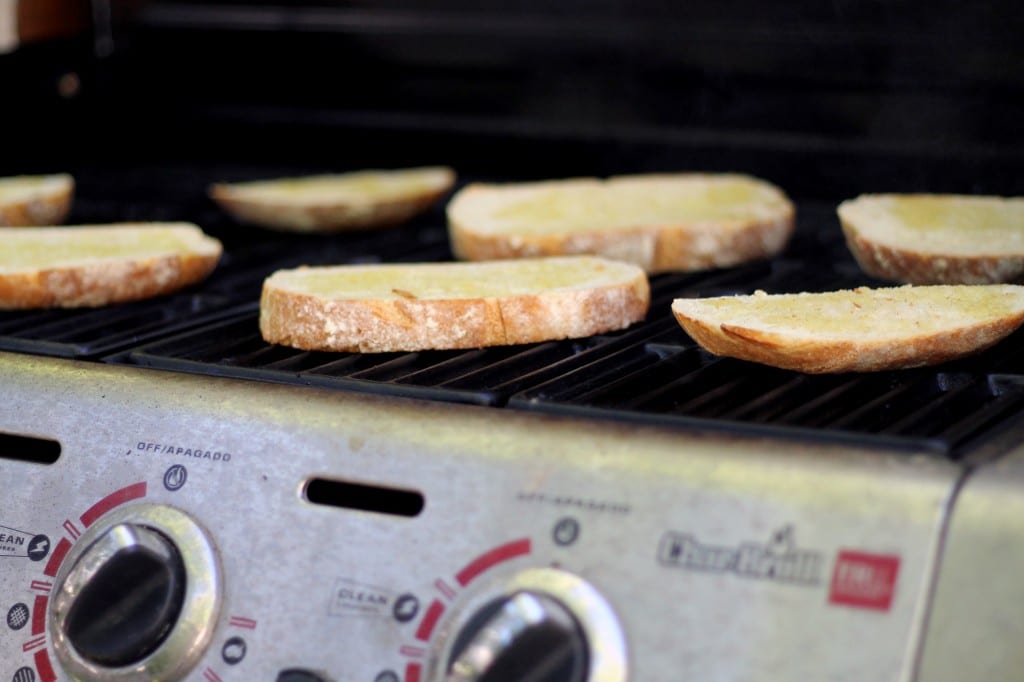 Pardon my dirty grill. I’ve used it almost every day for the past 2 months. Have I mentioned yet how much I love this grill?

Once the bread is toasted nicely (both sides), put it on an elevated cooling rack, so air can flow all around it. If you take a hot, toasted piece of bread off the grill and set it on a plate or cutting board, the residual heat from the bread creates steam, which softens the bread and defeats the purpose of toasting. Let that sit while you deal with the pepper.

So what we’re gonna do with the pepper is roast it. If you want to avoid this part (because, granted, it can be a pain) then you can just buy those jars of roasted and peeled red bell peppers in water. It’s a much easier option, but it just isn’t as good. And I like the color variety you get from an orange or yellow pepper.

To roast the pepper, simply put it on your grill and turn it every few minutes. You want to get it really charred all over the skin. For me, I didn’t want to use a whole section of my grill just for one pepper, so I turned on the side burner and used that. Worked like a charm. 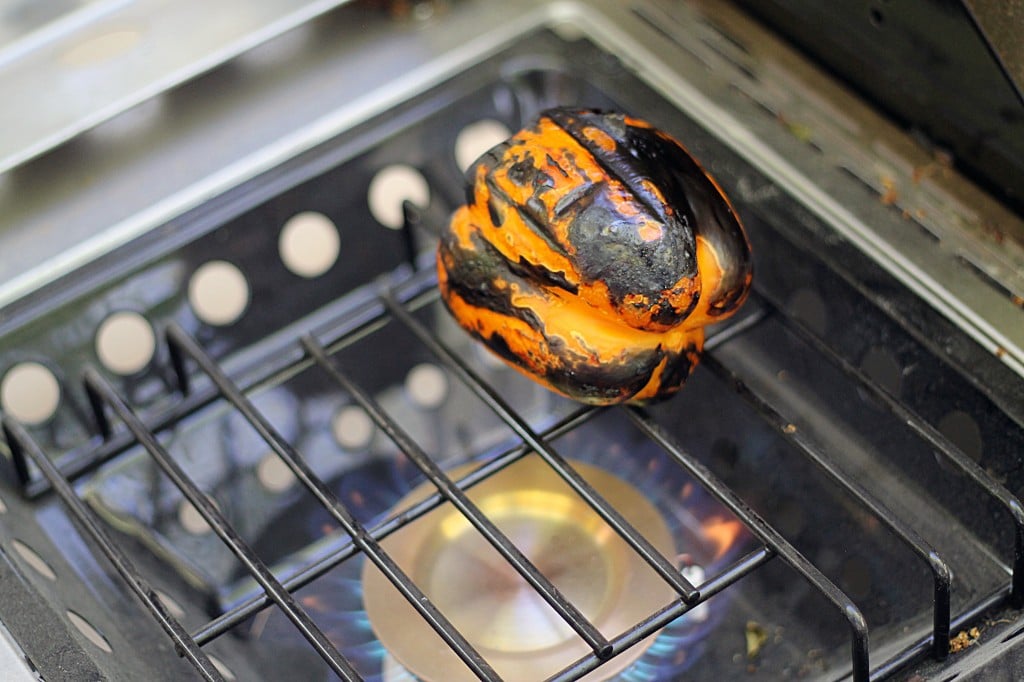 Now, you may look at that pepper and think, “What the crap? That things full of carcinogens! You can’t eat that!” Well first of all, yeesh, calm yourself. We’re not going to eat the skin. When you char the skin of a pepper like this, it actually separate from the flesh of the pepper, protecting the part that we’re actually going to be using. But nearly every part of the skin needs to be charred in order for the skin to release from the flesh, so take your time. Especially on the tops and bottoms. But even still, that’s not quite good enough. So as soon as you’re done charring the skin, put the pepper in a ziplock bag and seal it. 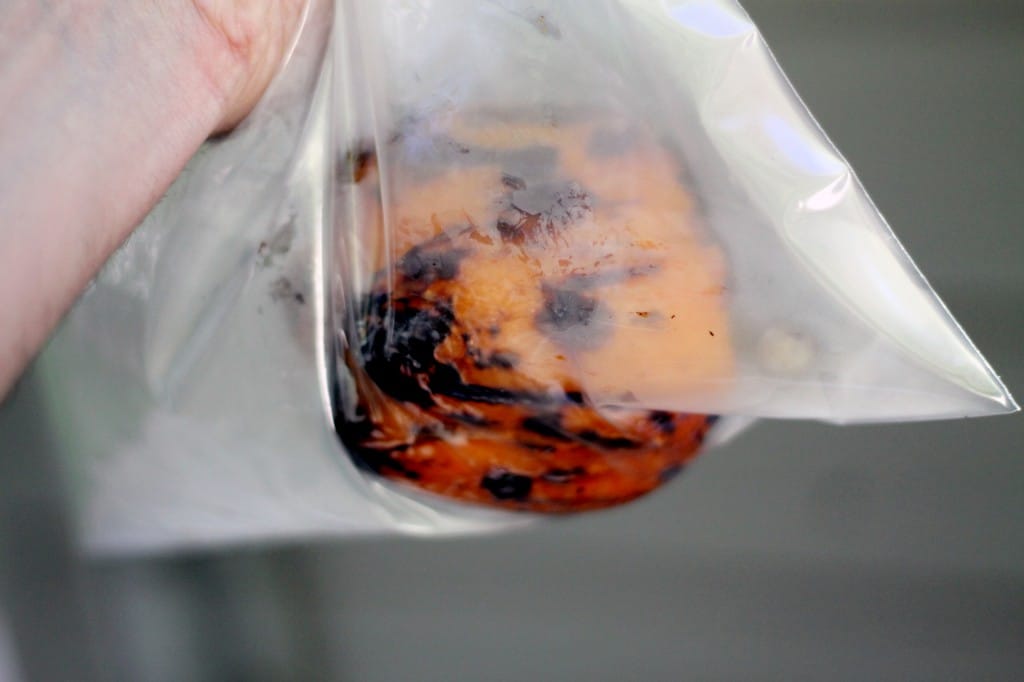 Doing this creates steam in the bag, which helps loosen any parts of the skin that may still be holding on. After the pepper has sat in the bag for 5 minutes or so, take it out and, while running it under cold water to keep your fingers from burning, peel the skin off. Should be easy to remove, though you maybe have to coax some parts. Also, pull off the stem and dig out the insides so you’re just left with the good stuff.

Once that’s done, cut the toasted bread into bite-sized cubes and put it in a large bowl. Cut the tomatoes, cucumber and roasted pepper into bite-sized pieces, and roughly chop the basil. Add that to the bread, along with the capers. Just before serving, pour on the dressing, add a pinch of salt and pepper, and toss it all together. If needed, drizzle a little more extra virgin olive oil over it and toss again. 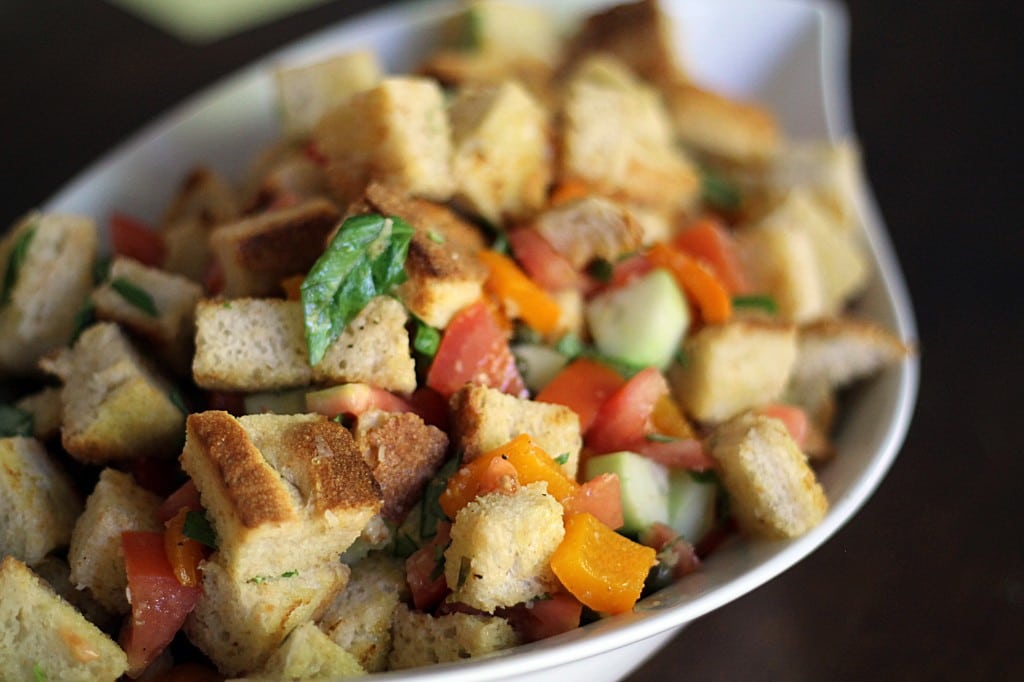 The flavor is perfectly balanced, with a bright finish from the lemon, and it’s amazingly fresh and light for being mostly bread. And the best part is, I’ve found most people have never heard of, let alone tried panzanella. Serve this for your next guests and you’ll blow their mind, especially when served with some grilled, marinated Cornish hens.

If you make the salad, be sure to come back and let me know how you liked the salad, and I’d love to hear if you made any adjustments that you really loved. Have a great weekend, y’all.