Our Plans for the Cabin Basement

Last week marked the real beginning of renovations up at the cabin. Even though we have brought up a few furniture piecesbrought up a few furniture pieces, and even built the reading nook in one of the bedrooms, it’s still felt very much on hold because of the heating and cooling issues up there (and all the old flooring/carpeting cramping the style.) 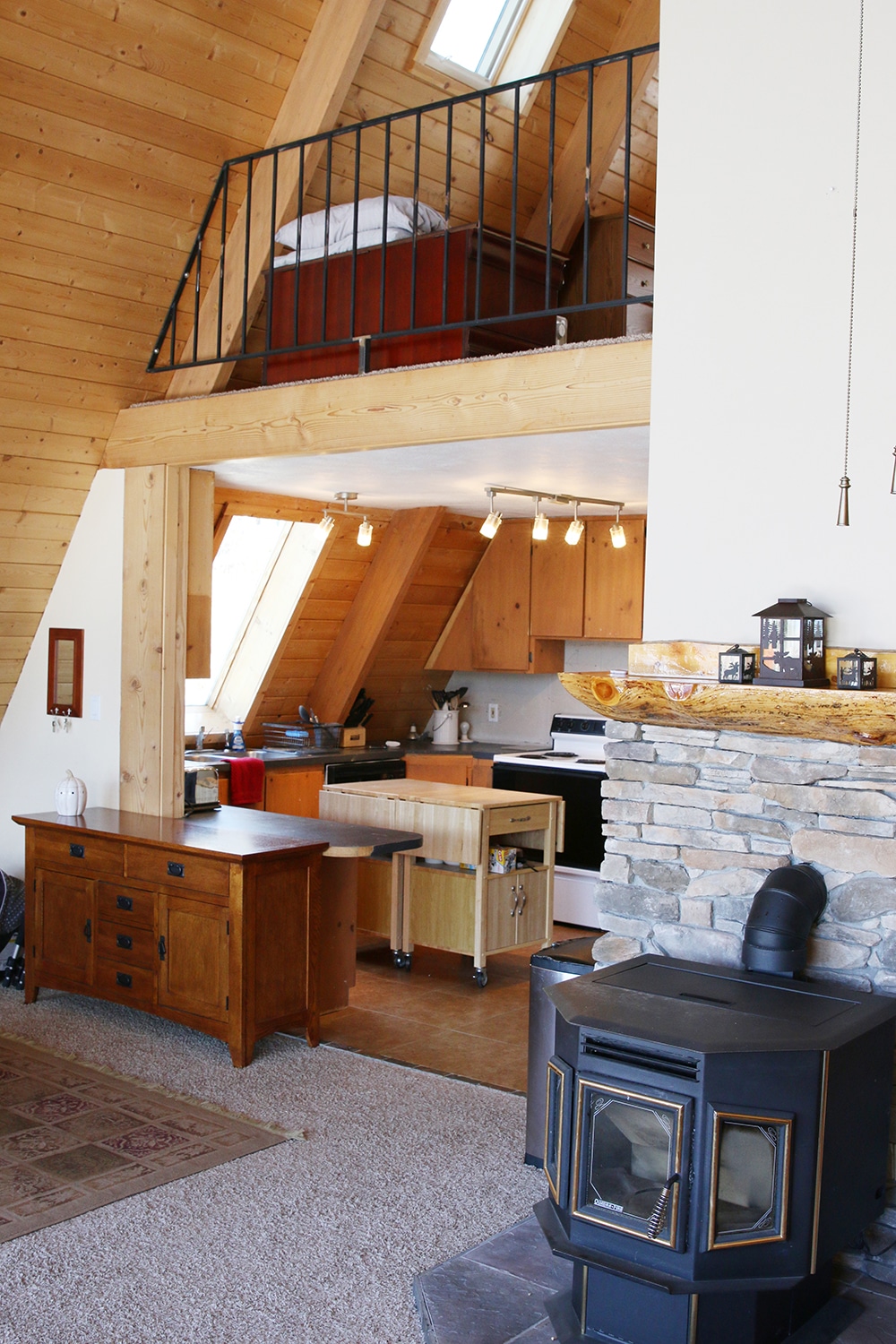 For those just joining us on these topics, the cabin is heated by a pellet stove (seen in the image above) for the top two floors, and a barely functional wood burning stove in the basement. I say “barely functional” because it takes a blazing hot fire about 3 hours of full court press to get the temperature in the basement up to 55 degrees. This has rendered the basement pretty much useless all winter. And the fact that there’s no cooling to speak of has rendered the top two levels pretty much useless during the summer. “Hot” does not begin to describe it. It gets like 90 degrees in the loft, and is miserable.

So we’re going to take you along for the ride as we add a propane furnace, true air conditioning, new propane fireplaces, and make it all happen *hopefully* without having to take down any sheetrock or add a drop ceiling in the basement. But so long as we have contractors are up there, why not break out the concrete slab in part of the basement and run some plumbing? Cool, let’s do it.

We’re of course talking about this area, where the pool table currently sits (but not for much longer): 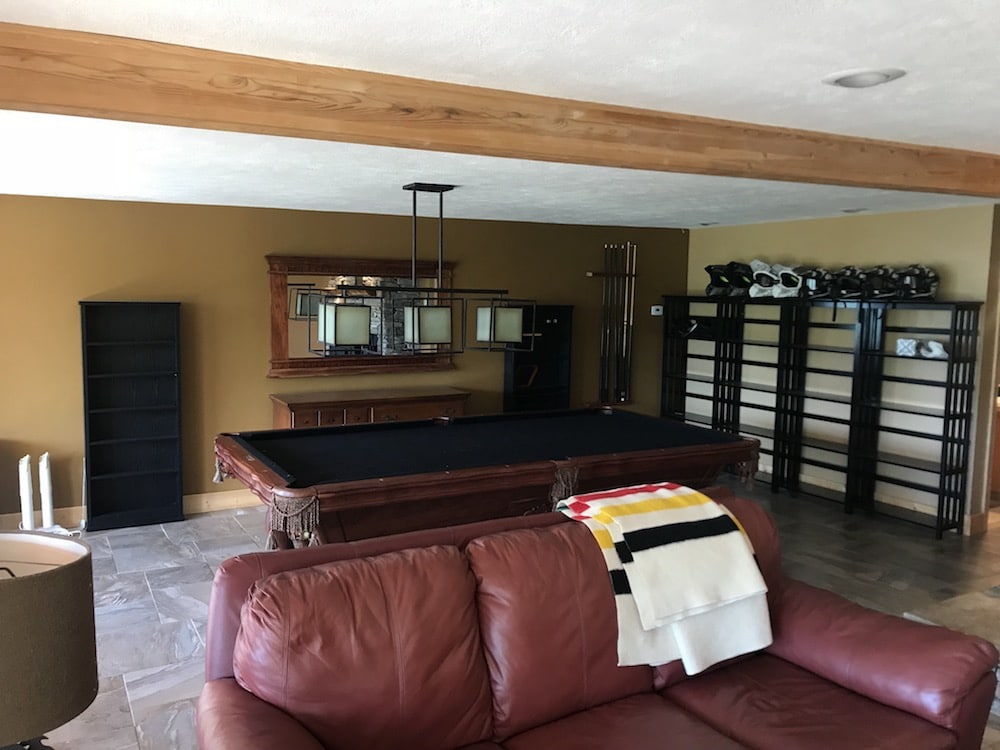 We’ve talked over this space for hours, and that’s no exaggeration. Do we want a pool table or ping pong table? Is this pool table our style? What storage can we do that would be better than a bunch of shelves? What if we turned it into a theater area? What if we just crammed in as many bunk beds as would fit? But every time we worked our way through an idea, we’d end it with a shoulder shrug and a “meh.” Nothing felt like “it”. 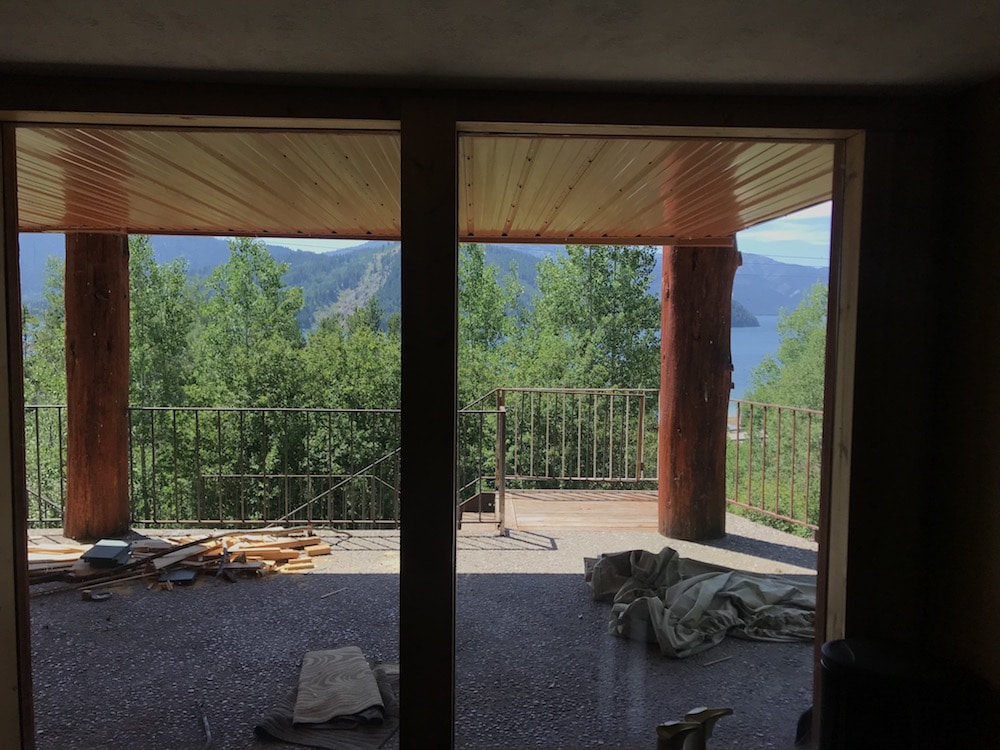 Then, we found ourselves standing right about where the camera was for the picture above. Just looking out the windows at the reservoir. Then Jules said, “I wish we had a bedroom in this cabin with that view.” And that was it.

We took measurements and started drawing plans. It’s a pretty long space, so it didn’t make sense to just have a bowling-alley-like bedroom, which meant that maybe we could add an ensuite bathroom as well. And since we were taking the “fun” part of the basement away, we also worked in a wet bar, with a fridge–an extra fridge is never a bad idea for a vacation house. That would make the entire living area downstairs a fun place to gather, snack and watch movies, play games, or just chat. Here are a couple plans we came up with – nothing final: 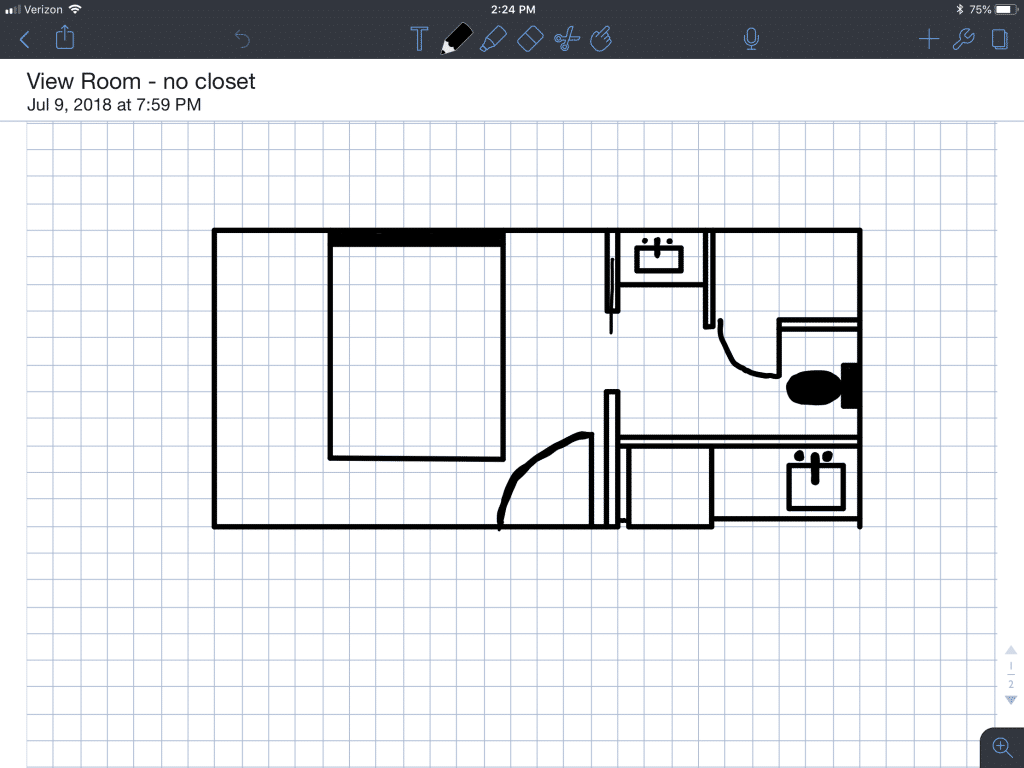 To give some orientation, the left side wall is the windows looking out over the reservoir. You can see the wet bar/kitchenette facing out toward the common area, with the bathroom on the other side of that wall. In this version the bathroom is a little more open, but there’s no closet for hanging clothes. The bed size in the sketch is queen, and everything is pretty close to scale (10in per grid square). And while there isn’t built in storage for guests in this one (we plan to rent this cabin out), we can probably find some sort of storage solution for the bedroom side. 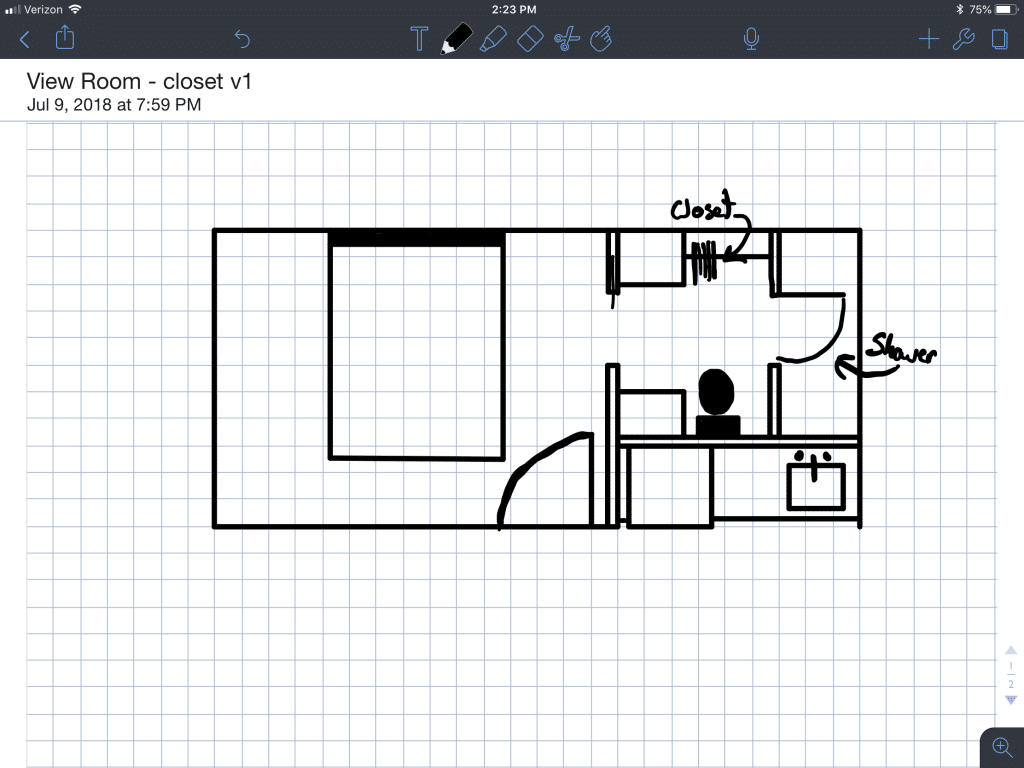 For this version, the bedroom and wet bar/kitchenette have the same footprint, but we’ve moved the bathroom items around a bit. We opted for a smaller vanity and tucked it up next to the toilet. The shower is a bit more narrow, but also longer – perhaps allowing for two shower heads. We’re able to get a hanging rod and dresser in here, along with a tall linen cabinet. So even though the bathroom will feel a bit more tight, there’s also some functionality added that might be nice. 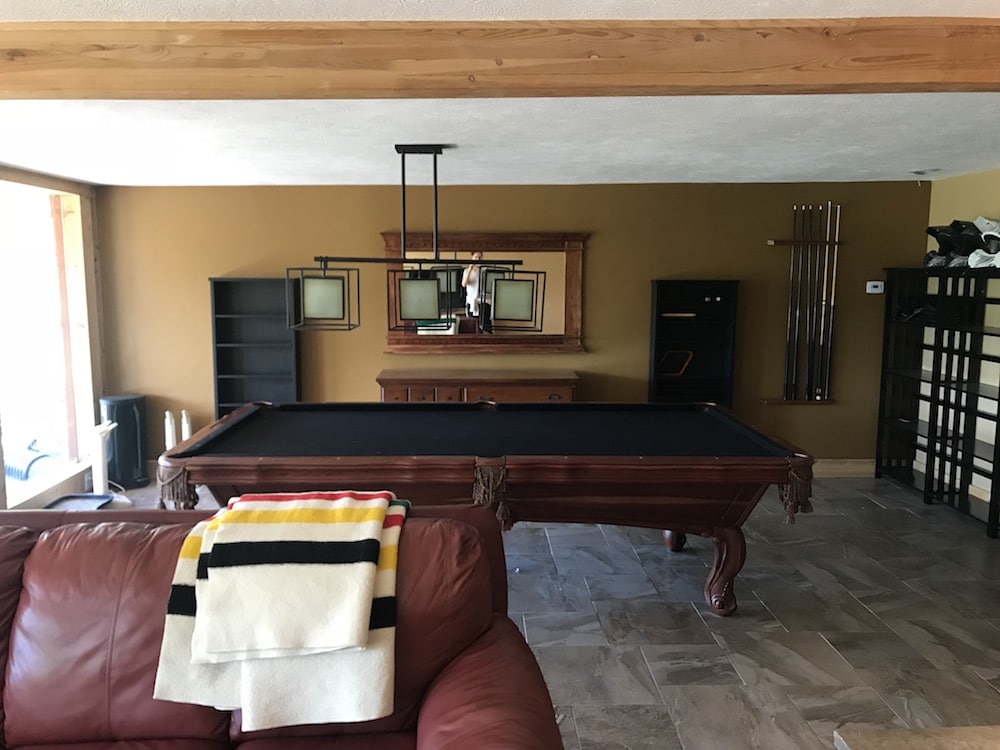 And that’s where we’re at. All of the plumbing drains for this cabin run right below this area, so getting new drains where they need to be shouldn’t be an issue. We’ll turn one of the large windows into one that swings open, for egress, and hang some curtains wall to wall for privacy when desired.

So what are your thoughts? If you were going to rent a cabin for a few days, would you want a closet in the bathroom to hang things up, or do you mostly just set your suitcase up on a luggage rack and pull things out when needed? We’d love to hear your feedback and, maybe other ideas we haven’t thought of. Either way, we can’t wait to sleep in this new bedroom and wake up to that view. 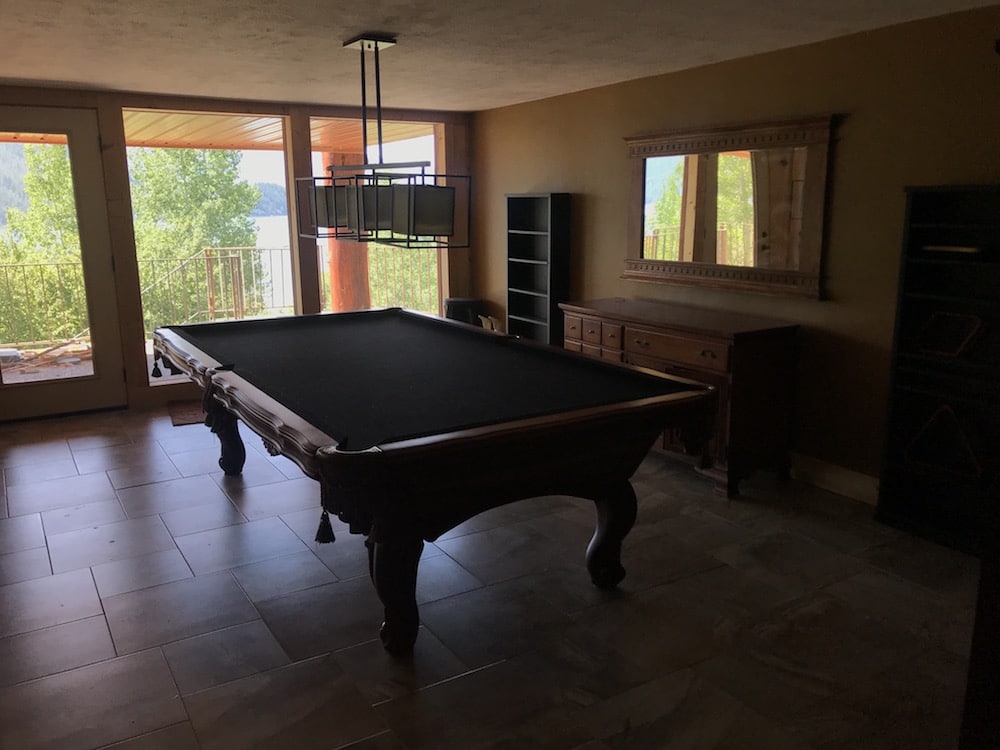 Half Off the Handheld Vacuum I Can’t Live Without »