The recipe I want to share today is a quick one, easy to execute, but so complex in flavor you’ll go crazy for it. See, I’ve never been a fan of potato salad. There was one potato salad I had while living in Louisiana that was made with mashed potatoes instead of cubed potatoes, and I actually really liked it, but outside that experience, I just don’t care for it. After years of not fully understanding why I couldn’t stomach potato salad, I one day realized it was the cold potatoes. I don’t like cold potatoes. They always end up making my mouth feel dry and there just isn’t enough flavor in the dressing to make it appealing to me. That’s when I started making warm potato salads, and I’ll never go back. 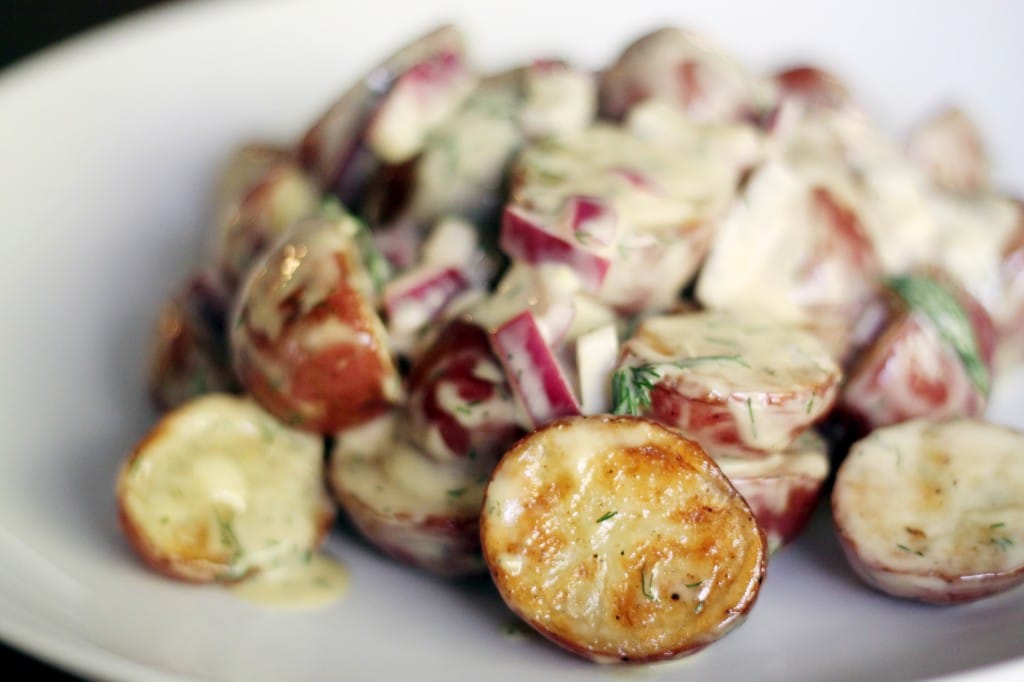 Beside the dressing and some basics, this salad has two ingredients: baby new potatoes and a red onion. Simple is the way I like it. Here’s what you need: 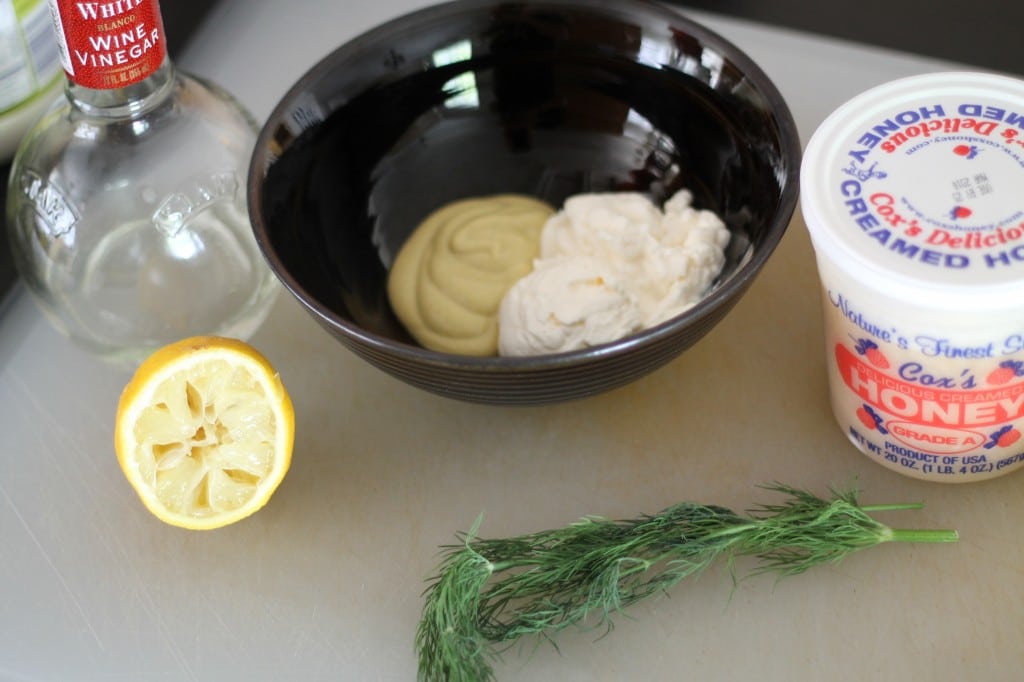 The picture above shows all the stuff for the dressing. In a small bowl, mix together the mustard, mayo, honey, lemon juice & zest, vinegar, dill, and a couple pinches of salt and pepper. Set aside.

Prep everything else by washing the potatoes and cutting them so every piece is bite-sized. Some of them you may be able to leave whole, while others will need to be halved or quartered. Not a big deal, just use your discretion. Boil the potatoes for 10 minutes in salted water.

Once the potatoes have boiled for 10 minutes, remove them from the water and let drain in a colander. Add the potatoes to a  bowl or ziplock bag and toss gently with a couple tablespoons of canola oil and some salt and pepper.

Now, before moving on I want to talk about a wonderful piece of equipment you may want to look into. It’s called a grilling skillet, and it’ll make your grilling life easier. Grilling stuff like onions, asparagus and green beans can be annoying. They always seem to slip through the grate and you find them a month later, fused into the metal drip pan beneath your burners. The grill skillet lets you get the grill flavor, without having to worry about your stuff falling through the cracks, as it were. My last grill had one built in, but I received the one pictured below as a gift and it works perfect on my new grill. 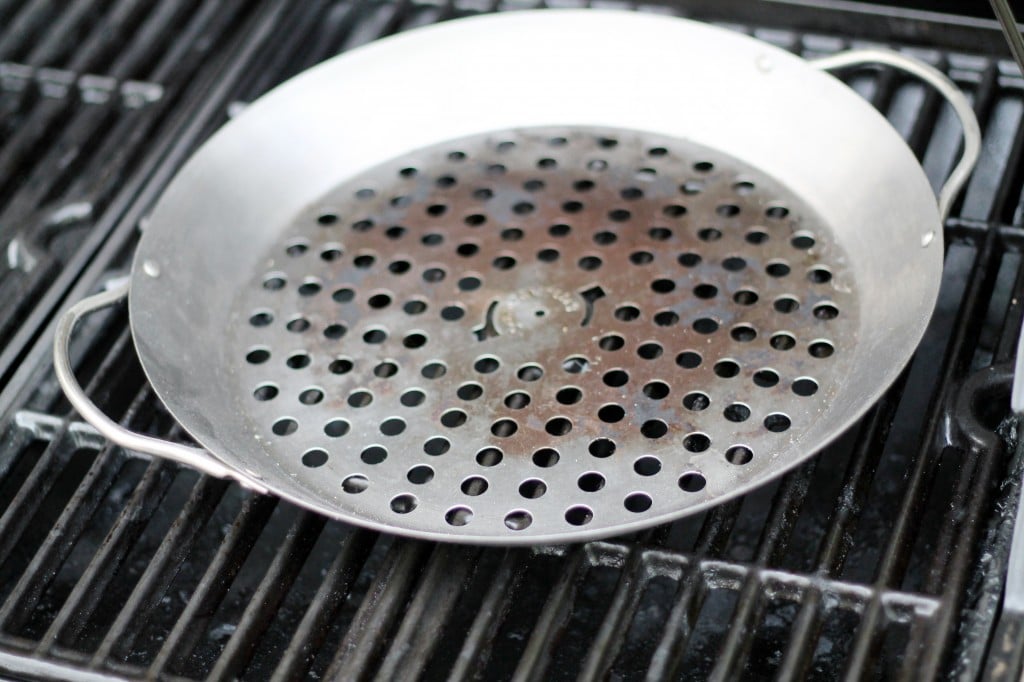 So put the grill skillet on your grill and heat it on high for 10 minutes. Then, add the potatoes and cook on medium high with the grill closed, opening the lid every 5 minutes or so to toss, until the potatoes start browning (about 15-20 minutes), like so: 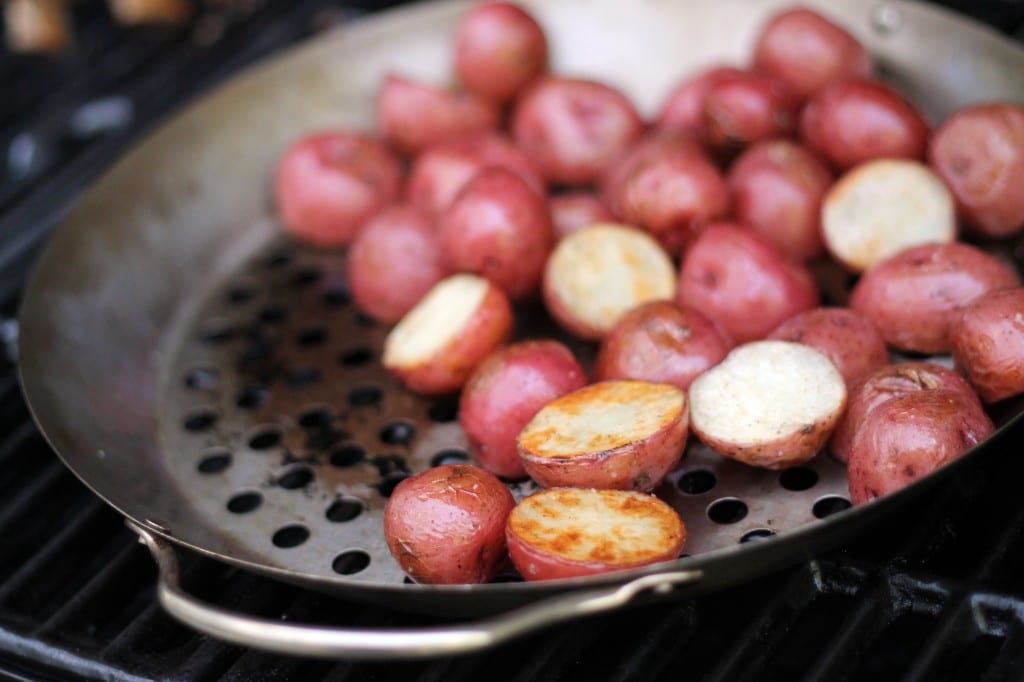 While the potatoes are grilling, chop your red onion and put it in a bowl. Once the potatoes are done cooking, add them directly to the bowl with your onions. This allows the heat from the potatoes to cook the onion just enough to remove a lot of the harshness raw onions have, but it doesn’t cook them enough to where they lose their crispness. It’s the best of both worlds, really. Toss that all together. 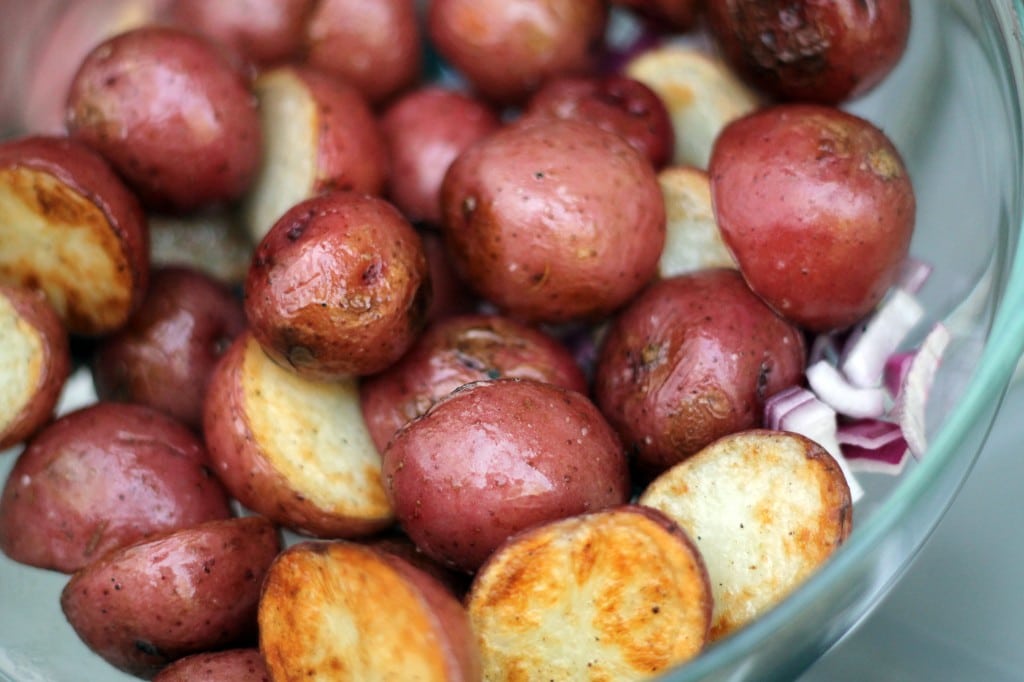 Now, while the potatoes are still hot, add the dressing (you may not need all of it, so only use as much as you think you need to) and toss to coat. Serve warm with whatever you want. It goes really well with pork chops, steak, or ribs. 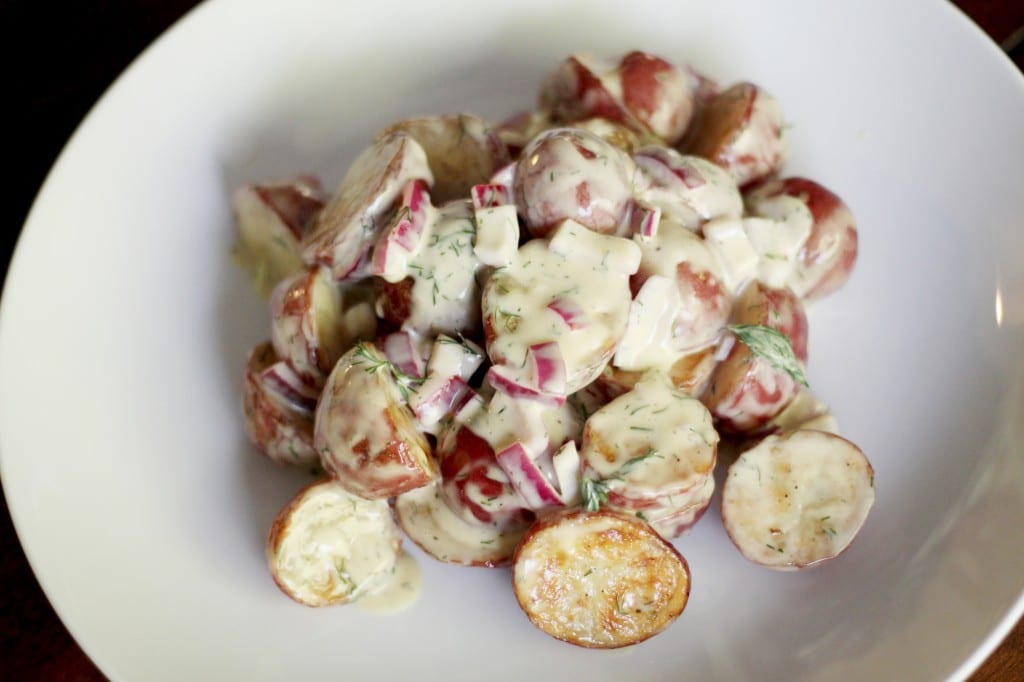 That’s it. You could also add some lightly grilled green beans, which would be good, but honestly it doesn’t need that. Jules put it perfectly – “There’s no one strong flavor. You taste it all, without anything overpowering anything else.” Give it a go with your next barbecue, or take it over to a neighborhood cookout. The lemon brightens the whole thing up and makes what could be a very heavy dish actual quite light-tasting. And of course, my favorite part, the potatoes are warm – the way they’re supposed to be. ;) 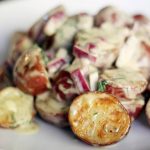 I've never been a fan of cold potato salads, so I started making them warm. I've seen dill and dijon used in a lot of potato salads, but I think the warm potatoes mixed with the crisp red onion sets this dish apart. It seems simple, but the flavors are anything but.
Prep Time5 mins
Cook Time30 mins
Total Time35 mins
Servings: 4 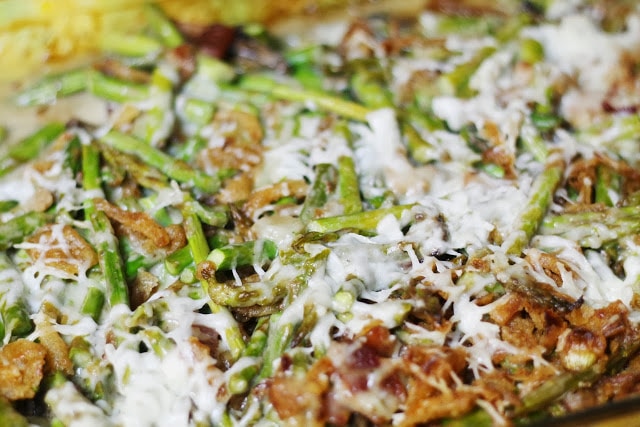