This is the 3rd course in a 4 course meal, designed to be a springboard for your special occasion. You can find the other courses here:
Course 1 – Broth Seasoned with Pork + Vegetables
Course 2 – Arugula with Pears + Prosciutto 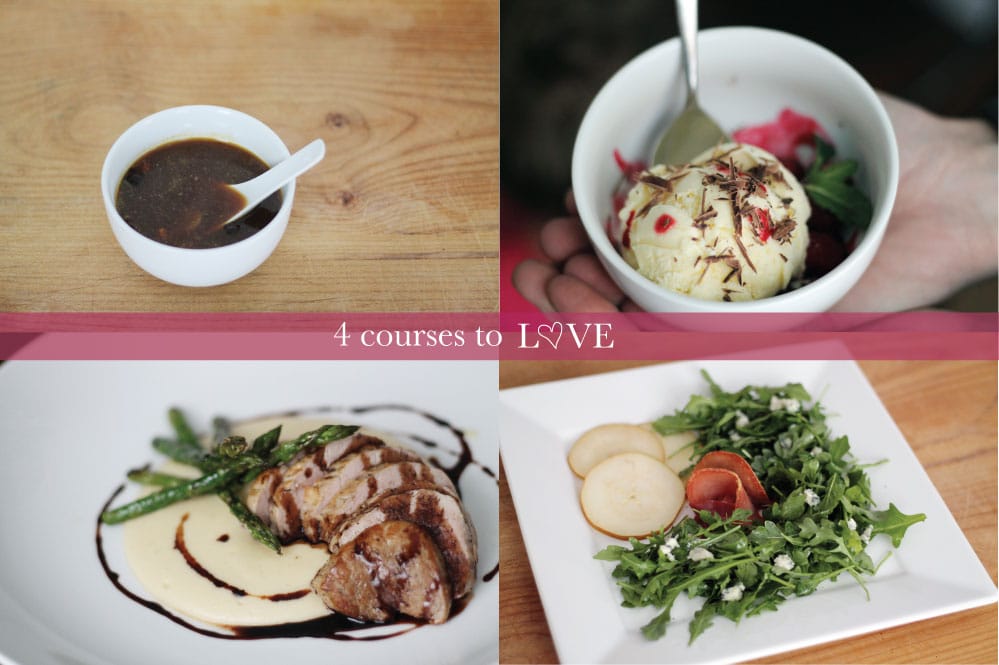 I’m not sure if it’s the same for you, but whenever I think “special occasion,” filet mignon jumps out at me. And of course, there’s good reason for that. Filet mignon comes from a part of the back that cows don’t strain too much. Muscles that a cow uses a lot will be tougher, as will the meat from those muscles. The filet is also a relatively small muscle in relation to the rest of the cow. Tender + limited = valuable. So when you want to show someone you value them, why not splurge on the most expensive cut of meat?

Well, I want to offer an alternative. See, beef tenderloin (aka filet mignon) is still beef. This means it has potential to be a little heavy. Typically, filet cuts are smaller than, say, a 20oz Porterhouse. So if you’re only having an entree and not much else, you’d be fine going with a filet. For this meal, we took it further and did 4 courses. So the trick becomes, how do we make the main course feel like a main course, while keeping it light? Enter, the pork tenderloin.

For almost every cut of beef, there’s a matching alternative in pork. Sometimes they have different names and it can be confusing, but not so with the pork tenderloin. The pork tenderloin is the filet mignon of the pig, and it’s as tender and juicy as you’d expect. It’s also more lean, and about 1/4 the price. Win/win/win. All things considered, it’s a great option and I think you’ll dig it. That said, you could still do this entree with beef tenderloin and it would be awesome.

First thing to do is make the pomegranate balsamic reduction. Here’s what you need:

Add that all in a pan and simmer it until it’s reduced by about 2/3 (meaning there’s only 1/3 as much as you started with). Set the reduction aside to cool. 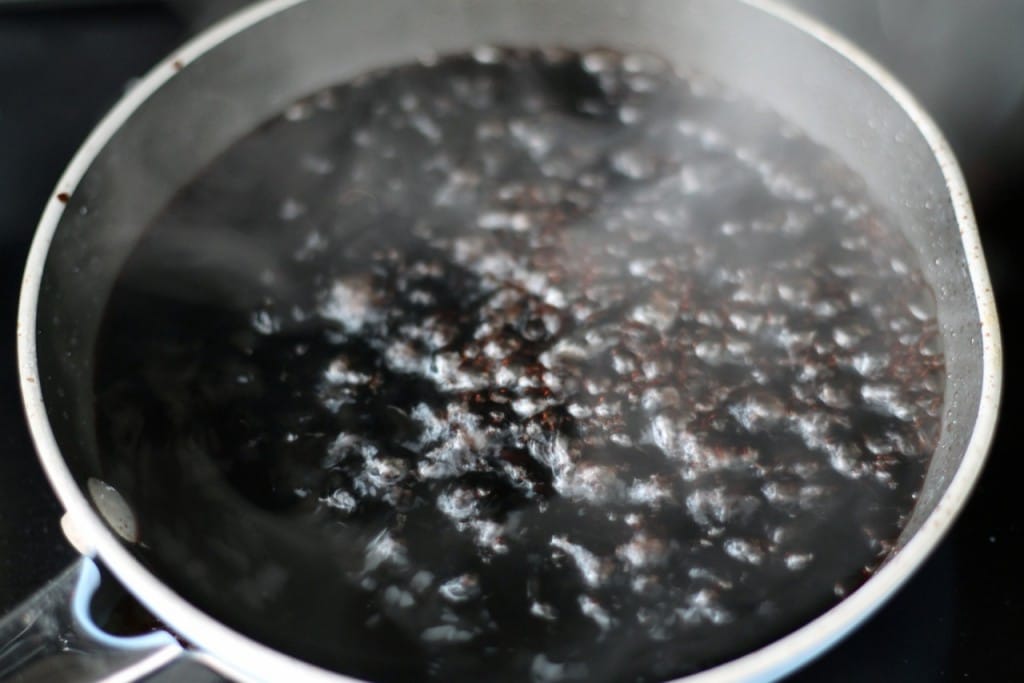 Here’s the rest of what you need for this dish:

We’re going to take this one piece at a time, and then I’ll describe the sequence. As long as you prepare your ingredients before you start cooking, you’ll nail it. Let’s start with the asparagus.

First we’re going to wash, cut, parboil and shock the asparagus. Parboiling is essentially where you boil something until it’s only partially cooked, and shocking is where you submerge the partially cooked whatever in ice water. Doing this serves a few purposes. If you just take asparagus and toss it in a pan with some cooking oil, by the time you get it cooked through, the outside will have lost its color and start to noticeably shrivel, making it look pretty sad. Parboiling will shorten the time your asparagus has to spend in the pan. Shocking the asparagus quickly halts the cooking process, which will helps the asparagus maintain both a little bite and its bright green color.

So, for the asparagus, trim the ends so each piece is only about 4 inches long. Boil them in plain water for about 1 minute, then remove from the pot directly into a bowl of ice water. Set on paper towel to dry and put a grill pan or sauté pan on medium low heat. When you’re ready to cook the asparagus, toss them in a little cooking oil with some salt and pepper, then into your heated pan to sear. You’ll cook them in there for about 5 minutes, tossing every minute or so.

Next, the potatoes. A potato puree is essentially a very creamy, smooth mashed potato. It’s a little more loose than a typical mashed potato, and is great as a base for any dish because it’s almost like a sauce. That’s why I like to flavor my purees, to turn them into something that not only pairs well with the other items on the dish, but enhance them. Since dijon goes so well with pork, it seemed like a great route.

Peel and dice your potatoes, then put them into a pot of water with a little salt. Put the pot on the stove top until you’re ready to cook. About 25 minutes before serving dinner, cover the pot and turn the heat on high. Once the potatoes are very tender, strain them and reserve a little of the boiling liquid. Put the potatoes in a blender with 1 tbsp of butter, 1/4 cup of milk, 1/4 cup of the cooking liquid from the potatoes, 2 tbsp dijon mustard, and a pinch of salt. Blend until smooth, adding more of the boiling liquid a little at a time until it’s close to the consistency of pudding. Taste and add more salt as desired.

The 4th and final element is the pork. First, preheat the oven to 425 and put an oven-safe pan on the stove top on medium heat. Lightly coat the pork with cooking oil and sprinkle on a little salt and pepper. Once the pan is heated, add the pork piece and sear on all sides, like so: 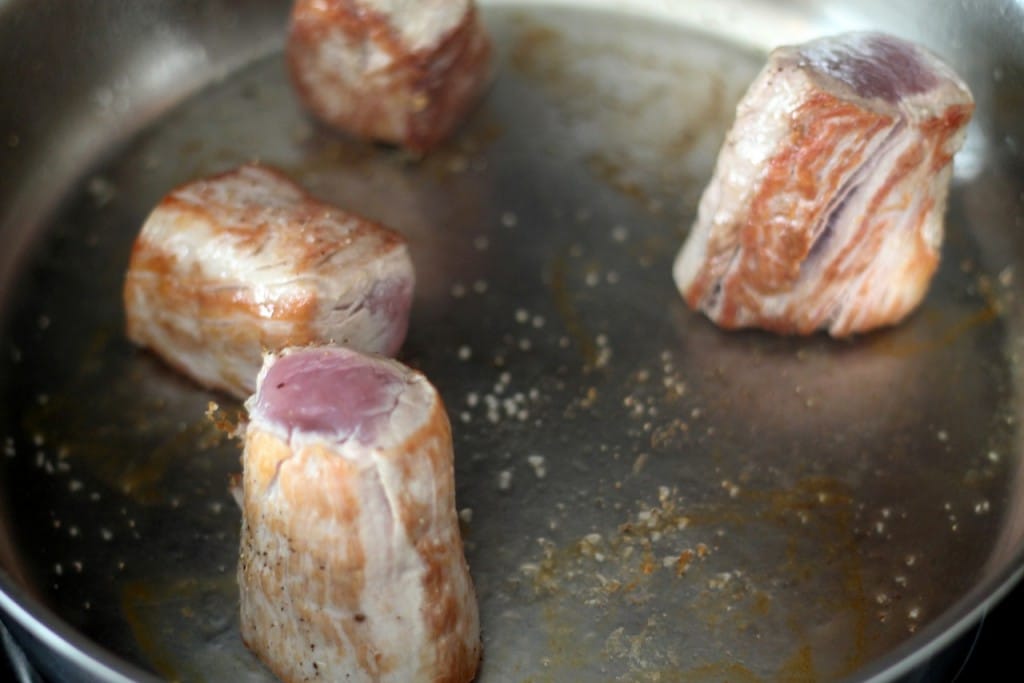 Yes, the recipe calls for two pork pieces and my picture shows 4. We had friends over when I was testing this recipe. In case you’re wondering, they loved it.

If you have a meat thermometer with a lead wire, like this one, then use it. If not, I highly suggest it. It’s one of the best things you can buy to prevent overcooking meat, and since the probe stays while cooking, you don’t have to keep poking the meat to check the temperature, releasing valuable juices each time. The one linked is the one I have, and I love it because I can check the temperature of whatever I’m cooking from anywhere in the house with the remote. So awesome.

Once the meat is seared on all sides, insert your probe thermometer into the thickest part of one of the pieces of meat, and slide the pan into the oven. Cook until it reaches an internal temperature of 143, remove from the pan and set on a cutting board. Remove the probe after a couple minutes. Let the meat rest for 10 minutes before slicing into pieces about 1/4-1/2 inch thick.

Ok, now the sequence. Start everything one hour before dinner:
• Start the pomegranate balsamic stuff reducing
• Wash and cut the asparagus
• Wash and cut the potatoes, put them in pot of salted water on the stove (don’t turn the burner on yet)
• Put a small pot of water on another burner to boil
• Trim the silver skin from the pork tenderloin and cut two, 4-inch pieces from the thickest part
• Coat the pork pieces in oil, salt and pepper and set aside
• Add asparagus to boiling water and boil for 1 minute, then shock in ice water
• Dry the asparagus with paper towel, toss with oil, salt and pepper in a bowl, then set aside
• Pomegranate balsamic stuff should be done, so remove from heat, put in a bowl and set aside
• Put the oven safe pan (for the pork) on medium heat and preheat the oven to 425
• Cover the potatoes and turn the burner on high
• Sear the pork on all sides and slide the pan in the oven (don’t forget the probe thermometer)
• Put a grill pan or other sauté pan (for the asparagus) on the burner the pork pan was on
• Remove the pork from the oven once it has reached 143, remove pork from pan onto a cutting board to rest
• Add the asparagus to the heated pan on the stove
• When the potatoes are tender, strain them (reserving some of the cooking liquid) and put them in a blender with the rest of the stuff for the potatoes- blend it until silky smooth and adjust seasonings
• Plate by spooning some of the potatoes onto the plate, slice the pork into 1/4-1/2 inch thick slices and fan out from the center of the potatoes to one side, and lean 5 asparagus spears up against the pork. Spoon a little of the pomegranate balsamic reduction over the pork and around the plate in a swirl pattern. Serve. 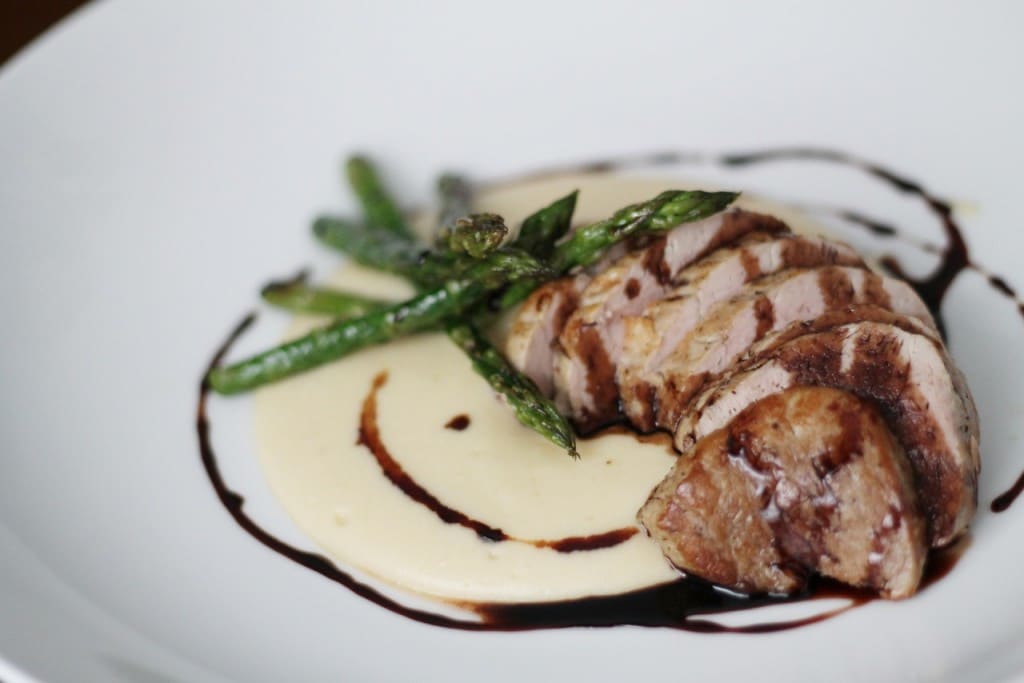 That’s all there is to it! I know that, for the home cook, things like this can seem intimidating, but hopefully the steps I outlined help. It really is not difficult, and will blow away anyone you make it for on your special occasion. And I think you’ll dig the dijon potatoes. Seriously, with the pork, it’s out of this world.

As good as this entree is, don’t forget to check back on Thursday for dessert. I’ll share a simple recipe and technique for the perfect, home-made vanilla bean ice cream, and show how to make a flawless raspberry syrup. See ya then, folks! 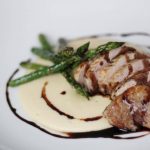 All things considered, the pork tenderloin is a great option for special occasions because it's tender, juicy, delicious, and sits lighter in the stomach than beef. The potatoes in this dish almost act like a sauce and elevate the pork to another level. It's a winner.
Prep Time30 mins
Cook Time30 mins
Total Time1 hr
Servings: 2

For the Pomegranate Reduction:

For the Potato Puree

Next, prepare the rest of your ingredients:

« A Nursery Glider / Rocker at Every Budget 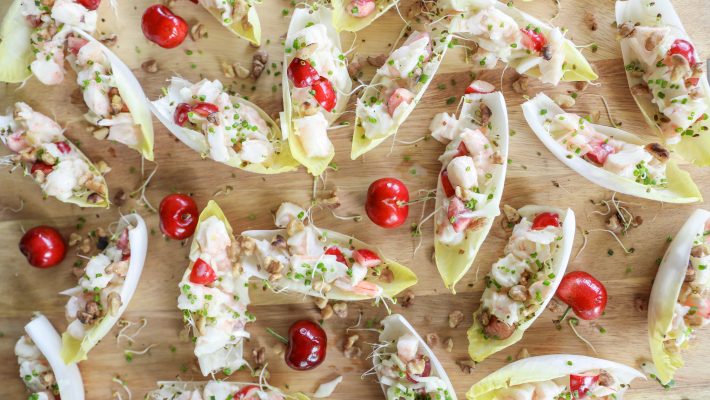 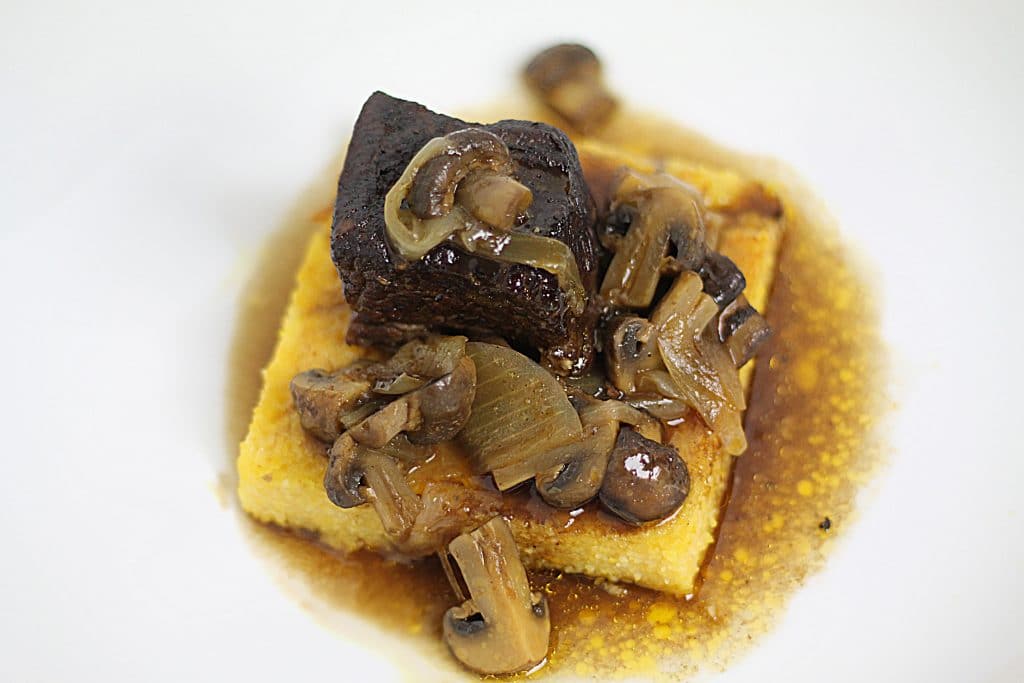