TOP
Brandon is Chris’s brother and Steph is his lovely wife.  For the three Christmases that they have been married they have always delivered a hilarious card, usually involving them (and their cats!) in some seriously questionable sweaters.  One year there was even a fire made of construction paper in the background keeping the family cozy. 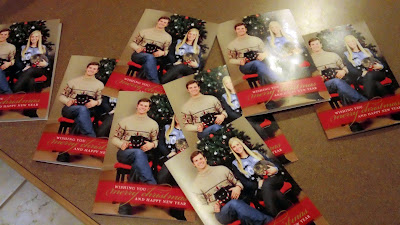 We got to see plenty of their card this year.  There are only eight of Brandon and Stephanie’s Christmas card pictured here–but don’t worry, we have already collected two more since the picture was taken.  Not that we are weirdos going around and collecting other people’s christmas cards–but we have been finding them all over our house!

We were gone for MAYBE 30 minutes, and Brandon and Stephanie are our go-to sitters since they are family and live right around the corner.  Greta was asleep, so we really just needed a warm body to keep the house company.  We soon found out they went above and beyond that request.   As we crawled into bed that night, I felt something stiff under our fitted sheet.  This was right after we bought the sheets so I assumed, “oh, I think we left a tag on the sheet or something.”  And there was the first card we found.  After I was sure Chris didn’t plant it there, we got a good laugh at the thought of Brandon and Stephanie thinking to put their silly card in our sheets. But–it didn’t stop there.  And we are not sure when it will, because we KEEP FINDING THEM.

I have been writing on the back where each was found (this is not neccessarily in the order in which they were found):
1.  Under our fitted sheet
2.  In the freezer, behind the juice–just found this one on Saturday after we bought MORE juice.
3.  In our dirty clothes hamper.  Brandon nearly had a heart attack when he popped in and saw that I was doing laundry.  “You didn’t find anything?!” Luckily the card had fallen out of the pile of clothes before I shoved them in the wash.  That could have been a mess!
4.  Chris’s garment drawer.  Chris found this one–obviously.
5.  Inside of the throw pillow cover on our couch.  Found just as I was ready to take a five minute rest one afternoon.
6.  In between the stack of plates…about 6 plates down.  We found that when we had company over on new years eve.
7.  In the tree.  Found when I was taking the tree down.
8.  In the dryer.  Found the same day as number 3.
9.  In one of my Christmas presents!!  What!?  And funny, it was the very first christmas present I opened.  I thought I was seeing a ghost.
10.  In the scanner.  Which is IN Greta’s room.  Those little sneaks went in there while she was sleeping!

It has been so fun finding these day after day in the most random places.  Over fondue, Brandon broke it to us that there is more to be found…but we might not find them until we move.  *cue a very large-eyed Julia staring at Brandon and Stephanie with mischievous grins* They were busy those 30 minutes that we were gone, and we’ll be busy the next year figuring out a serious payback! (hehehe)