TOP
New Year’s Eve. Usually Jules and I celebrate by going out to eat (just the two of us or 1 other couple), watching TV at home until 9 or 10 then going to bed early. We’re not partiers. But yesterday, we invited 3 couples over and had a little shindig.
I know I might have to turn my man card over for this, but I like entertaining. I think it’s fun to have people over, cook them dinner and play games or whatever. I’m not a fan of big parties, but dinner with a small group of people can be a great chance to make new friends or catch up with old ones. That being said, I have the tendency to go overboard with the cooking. Sometimes I spend so much time making food that I miss out on the entire party.
I was determined that last night would not be that way, so we had fondue. Is there a more social meal? You’d be hard-pressed to find one. Now, I know some of you might be out there thinking, “How is dipping chunks of bread into melted cheese and chocolate considered a meal?” Well, that’s not the only way to use a fondue set. Check it.
So first you need to make a broth. A salty/savory broth. Jules made ours from a recipe she found online (grrr… recipes) but the possibilities are endless with a broth. Just find some stuff, throw it together and see what comes out. I will say though that the broth Jules made was quite good. Here’s the basic idea:
Vegetable broth (maybe 5 cups)
1/4 cup or so of Soy Sauce
1 tomato cut up
1 tbsp or so of freshly grated ginger
2 tbsp or so of freshly grated garlic
some fresh cilantro, cut up
Sriracha hot sauce, to taste
maybe half a yellow onion and a few sprigs of green onion
If you’re feeling lazy, just using chicken stock for your broth is really good too.
Put that all together and let it simmer for 30 minutes or so. The cool thing about doing fondue this way is you cut up a bunch of fresh veggies, marinate some meat and just cook it straight in the broth. So transfer some of your simmered broth into your fondue pot and start cooking. As you cook, the liquid will start to evaporate a bit, so just keep adding more broth. The longer you cook, the more flavor you’ll get out of the broth and that’s a great thing. It’s a slow-paced meal that allows you plenty of opportunity for conversation. Of course, we didn’t want anyone going hungry so we also put some fresh bread on the table with some olive oil for dipping and a few bowls of cheese cubes. It was a great time, and I was able to be at the table the entire meal. Here are some of our favorite things to dip:
*Note, all veggies were fresh, not frozen. Meats were thawed and marinaded in bbq sauce for about an hour at room temperature (it’s safe, I promise- just don’t go much longer than that). Also, for a broth fondue, you don’t want to dip bread. It’d be a mess.
Broccoli
Zucchini
Tofu (kinda hit and miss on this one)
Mushrooms (whole, not sliced. Big ones cut in half)
Chicken
Steak 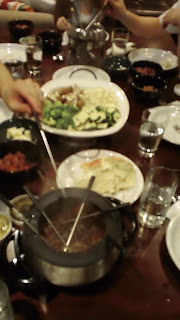 My personal favorites are the steak and mushrooms. So good. Some of you might be thinking, “Why would I buy a fondue set just for that? Why not just boil everything in a pot and give people their portions?” Well, you could do that, but that’s called soup. We’re going for an experience here, not just a meal. Fondue sets are really inexpensive and if you like having people over for dinner, it’s a delicious option.
So what are some ways you’ve used your fondue set? Seriously, I want to know. Leave a comment or something because I’m all about spreading the love and a blog is a perfect way to do it. Also, if anyone has any requests for me to write about, let me know.
Enjoy!