Shopping For Stone For Our Bathroom (And What We Decided On!) 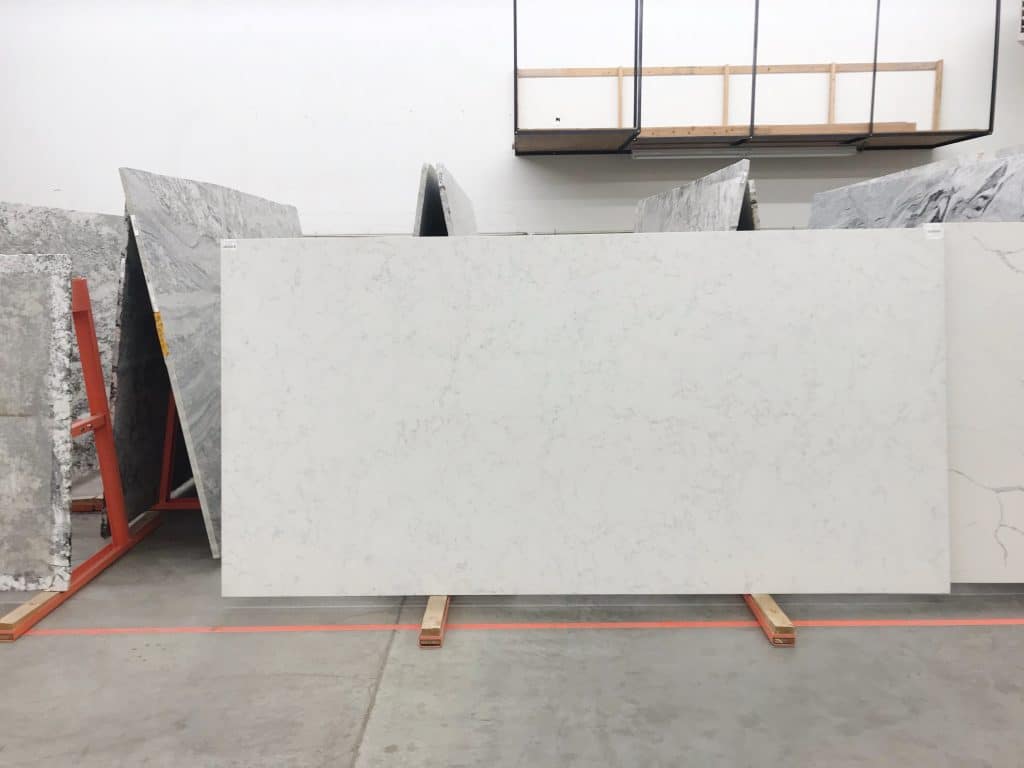 Confession: We’ve never shopped for stone for countertops–ever.  It has always felt like this super expensive, intimidating process. But for our bathroom, we’re trying to do a lot of things we haven’t done before: hire a contractor, shop for stone, design a custom vanity–and it’s exciting!

The first task in picking out our stone was actually designing our vanity–which is why we took you through that project over the last two weeks. I guess technically you don’t have to, but we wanted to be able to get an accurate bid and the vanity has to be in place before the stone can get fabricated and installed anyway, so that’s the natural first step. I mentioned in Friday’s post, we decided to go with option 1 (from this post), but we did tweak it a bit.

Here’s where we ended up: 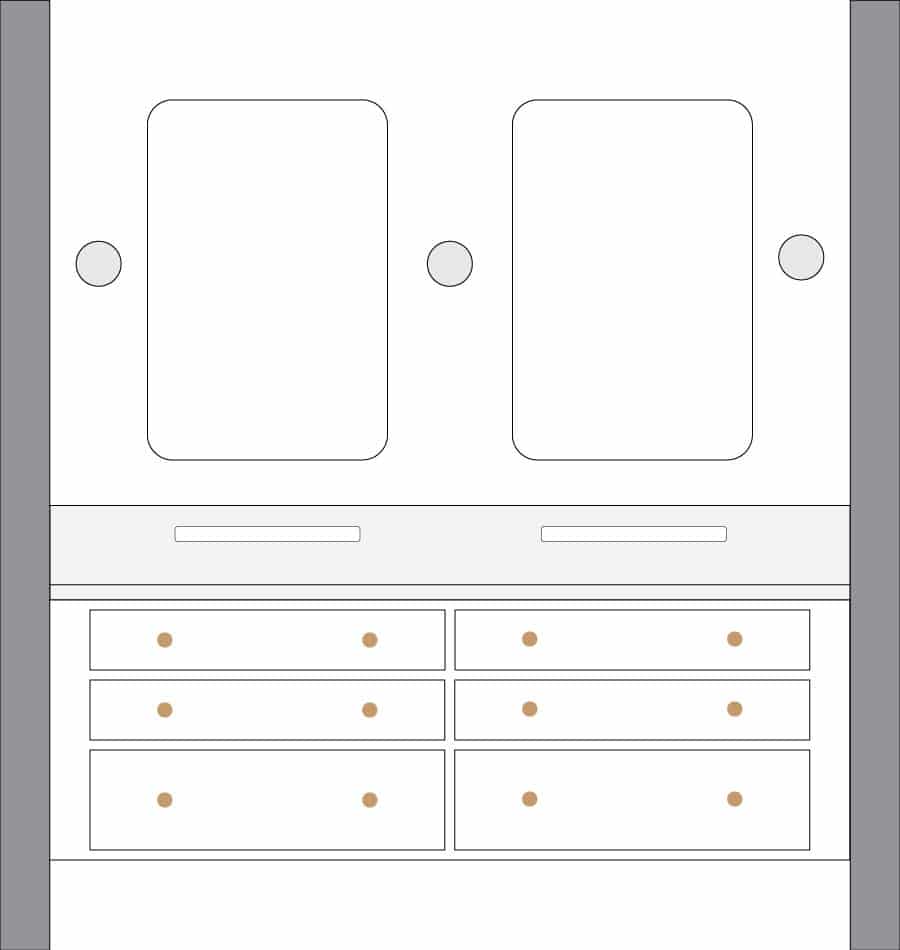 We changed it from a 72″ vanity to an 80″.  That allowed us to put some thicker spacing against the walls, without making the drawers too big, so our elbows had more wiggle room while getting ready. This also gives us the opportunity to mount wall sconces on either side of our mirrors. At 72″, everything felt scrunched and we were mocking up over-the-mirror lighting options that I wasn’t so excited about. And then it hit me–we’re doing a custom vanity, we can make it bigger–we have the space!

I talked before about how sometimes you don’t know how to do because you simply because you have not done it before. Buying a house comes to mind. That feels hard and huge. And then you do it and it’s like, Okay. I know how to buy a house now. That’s how shopping for our countertop was. It felt like it was going to be really difficult and confusing and it really wasn’t. Our contractor tipped us off to a few stone yards in the area and there was one he highly recommended because they sold their signature stone by the square foot, which apparently is not very common.

Unless you are lucky enough to come across a remnant that fits your project perfect, you are generally obligated to buy the entire slab of stone and have it fabricated to fit your space. We went to Valley View Granite (I’m pretty sure they have multiple locations) and they have their own stone line in house that allows them to, instead, sell it by the square foot which means lower prices and less waste.

We checked out their collection first, hoping we’d LOVE one so we could save money–haha. 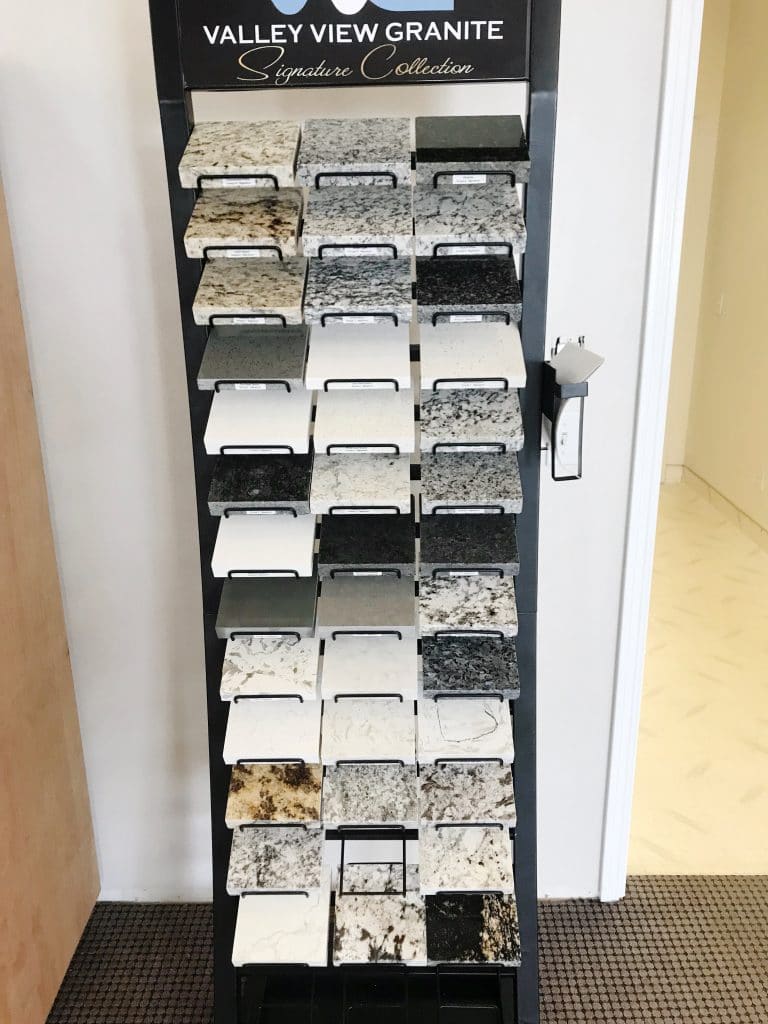 Although it says, “granite”, they also carry quartz and the prices went up the closer to the floor you got. The one we ended up really liking was the one on the far left, 4th from the bottom.

That’s it in a large slab version so we could really see how it moved. It’s called their “Venato” quartz. While we were there, we also fell for this raw black granite that, and are already thinking of using it in the cabin’s kitchen. 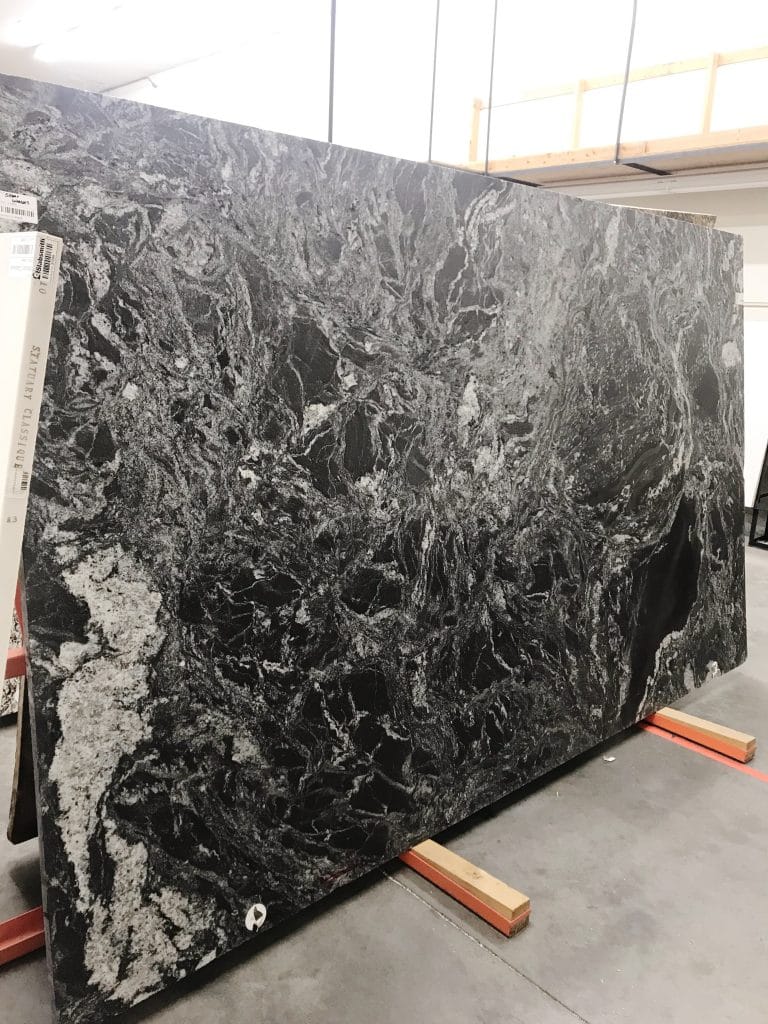 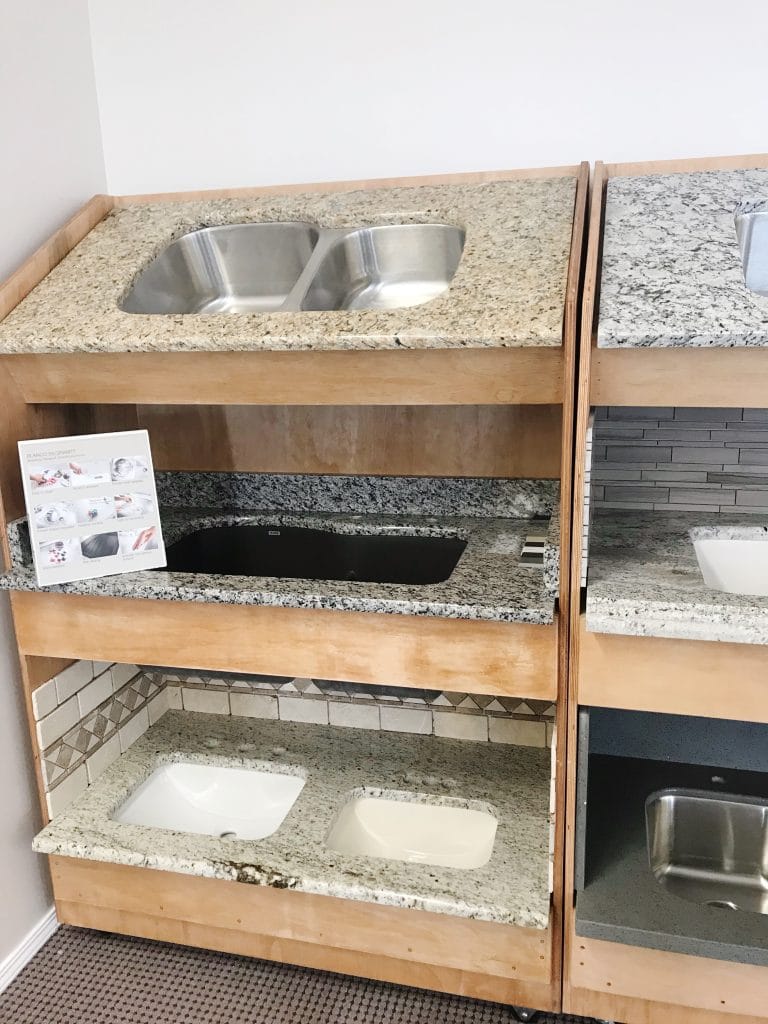 After we decided on stone, we picked the edging around the sink (some are very rounded, we went with a pretty clean edge) and the edge of the counter–where we decided on Flat Polish–the cleanest edge again. 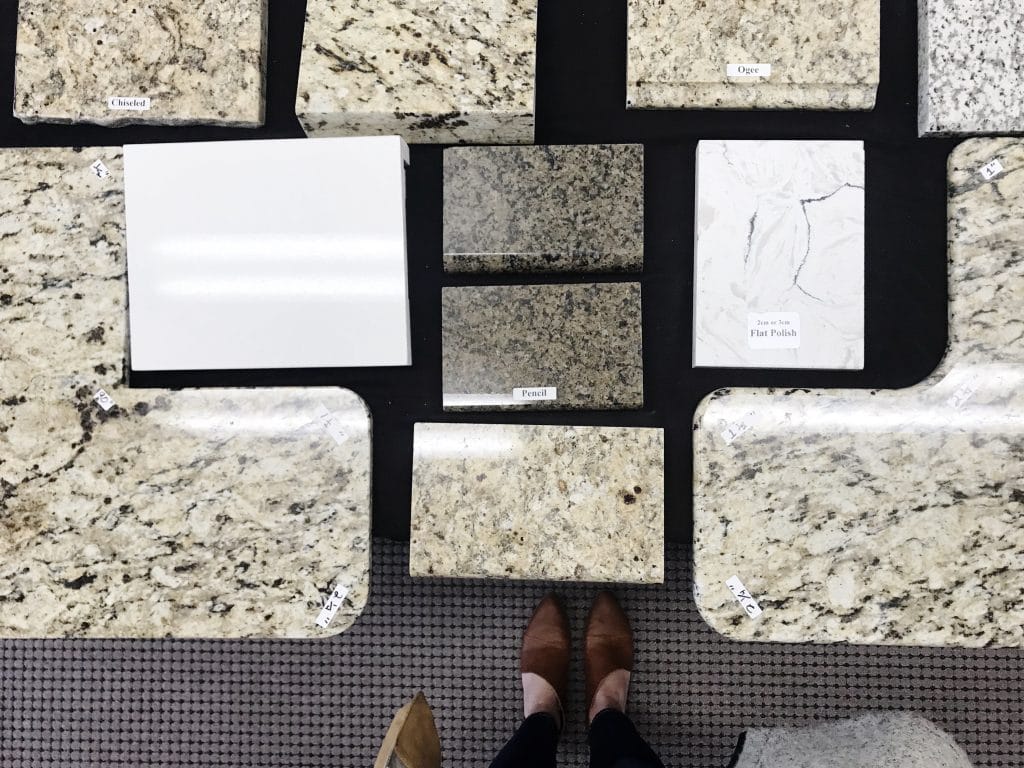 Before we left, they wrote up two quotes for us, the first was the counter + 4 inch backsplash on 3 sides. 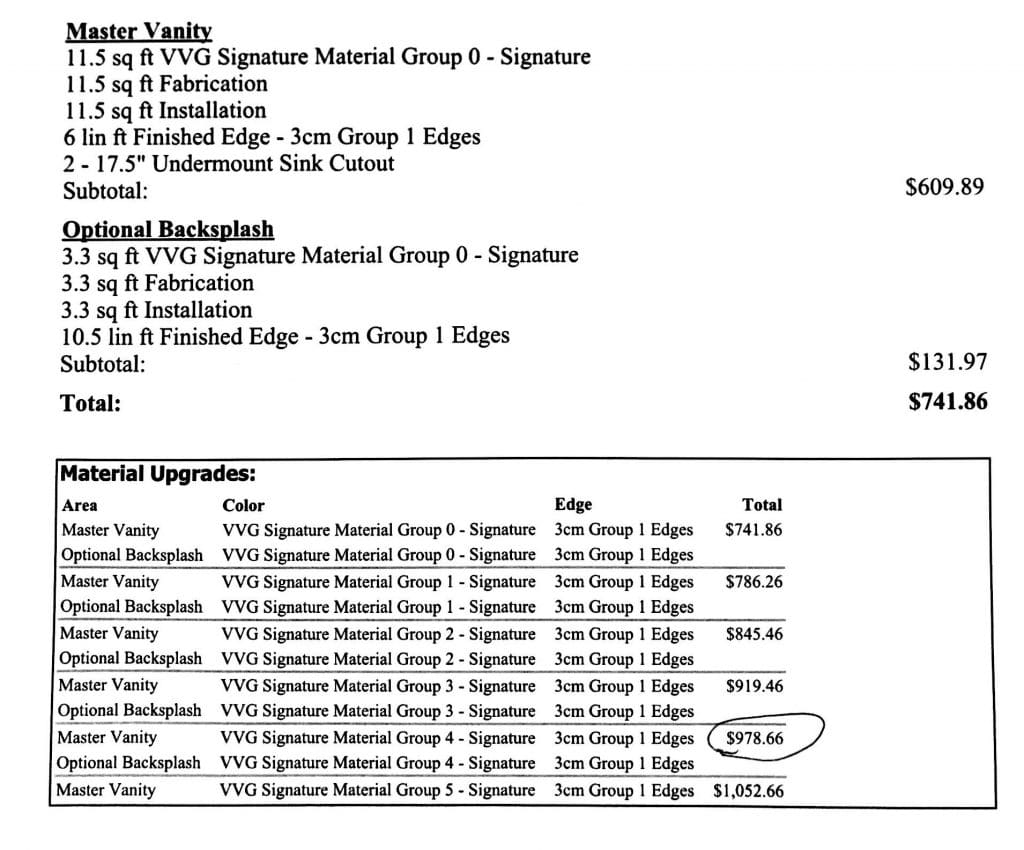 The total for that would be $978.66 (because the stone we chose was in their material group 4 price range).

We, also, for fun, had them write up a quote for the backsplash being carried all the way to the ceiling–which ended up being $2546.28! 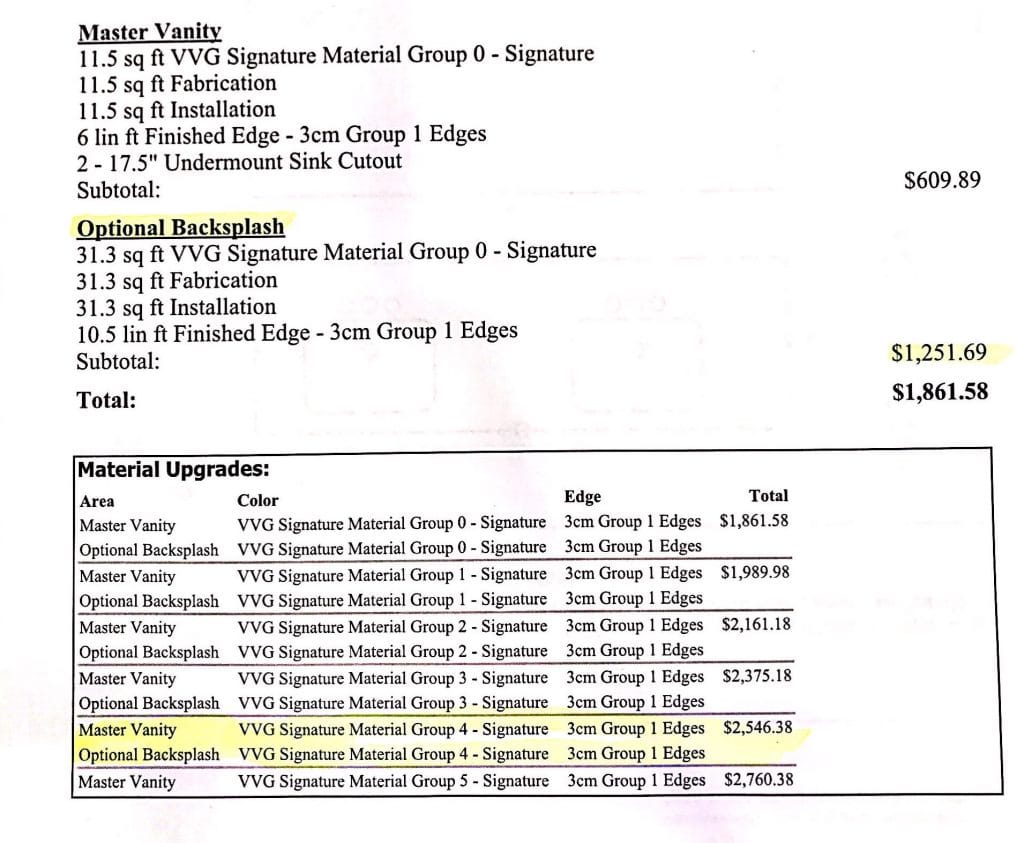 In the end, we decided to just bring the backsplash about 7.5″ up, have the wall-mounted faucets come out of it and then end before the mirrors. We also ditched the side splashes, which they said are great for kids’ bathrooms but not as necessary for adult spaces. So it will look like the mock-up below:

The countertop will be one of the last things installed, but we had to get it all nailed down now and it feels good! Once the vanity is hung, they’ll come and template the counter and it could take anywhere from 5 days to 2 weeks to be delivered and installed from there. 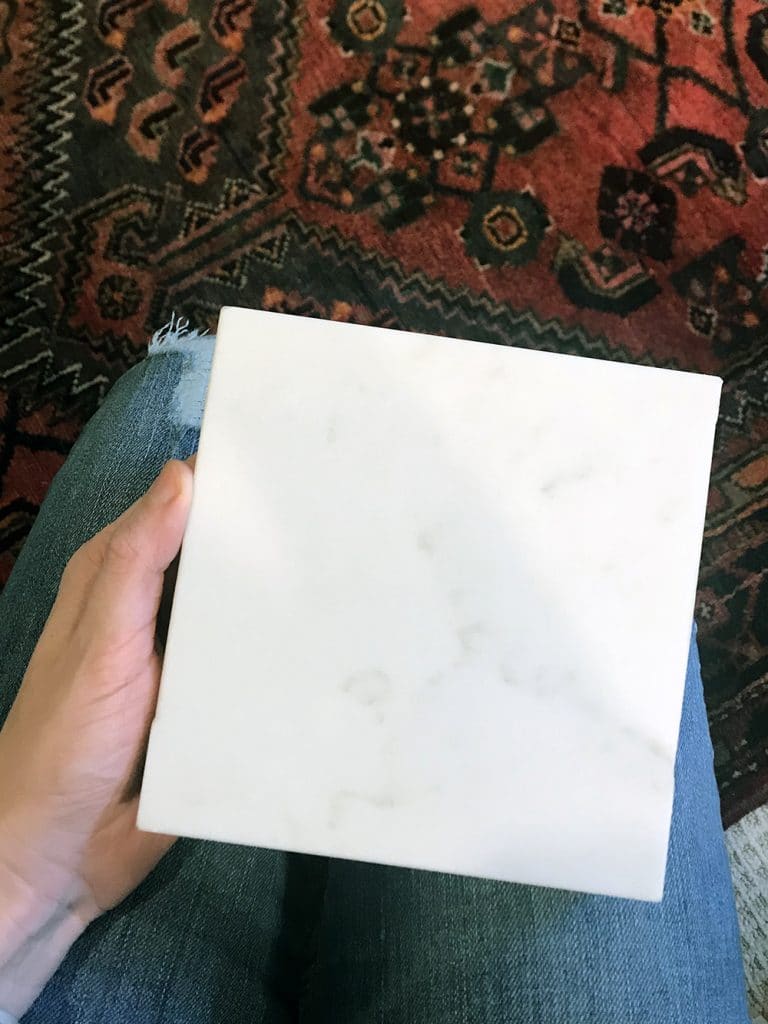 With the countertop set in stone (I’ll wait), I think I have the whole mood board put together. We’ll share that with our next update!