My apologies to everyone about the missed post yesterday. I had promised a turkey, but unfortunately the pictures I took all ended up really blurry. Since the turkey pretty much makes or breaks Thanksgiving, I want to make sure you have good photos that go along with the recipe. I bought another turkey yesterday and have been prepping it since last night and will have the recipe and better photos for you tomorrow.

I’ve never cared much for sweet potatoes, as historically prepared on Thanksgiving (marshmallows and all). I think my beef is that they are often overcooked to the point of mush, and lacking in the flavor department. And adding marshmallows, for me, only enhances the mushy mouthfeel. It’s like I’m eating baby food, and I’ve always tried to steer clear.

Fast forward to adulthood, and my increasing desires to be healthy led me back to the sweet potato, and other ways to cook it. The more I learn about this wonderful tuber, the more I appreciate it. Also, side note, yams are not the same thing as sweet potatoes. No matter what anyone tries to tell you, they are not the same. Pretty much everything in our American grocery stores are actually sweet potatoes, but they’re labeled as “yams” to distinguish between hard and soft varieties etc etc blah blah blah. Basically, most Americans have never had a real yam (which are native to Africa), and you can usually only find them in international markets. Moving on.

My recipe for sweet potatoes was inspired by several versions I’ve had, with a few modifications. I oil, spice, and roast my potatoes in a hot oven to get varying textures, without overcooking to the point of mush. Then I gently toss in a maple and bacon “vinaigrette” for extra flavor because, in my opinion, people often overestimate the flavors naturally found in a sweet potato. They can be bland, and need a little help in getting them to “eaten all gone” status. And trust me, these will be eaten all gone.

This is enough for 8 people. Here’s what you need:

Cover a baking sheet with tin foil, and put your pan in a 450 degree oven for 10 minutes (just the pan). While the pan is heating up, peel and chop your sweet potatoes into large chunks. 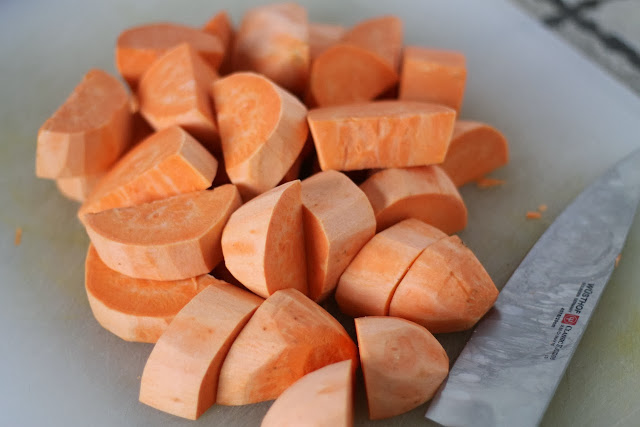 Put the potatoes into a gallon-sized ziplock bag and toss with the other ingredients until coated evenly. Let sit until your pan has heated for a full 10 minutes. 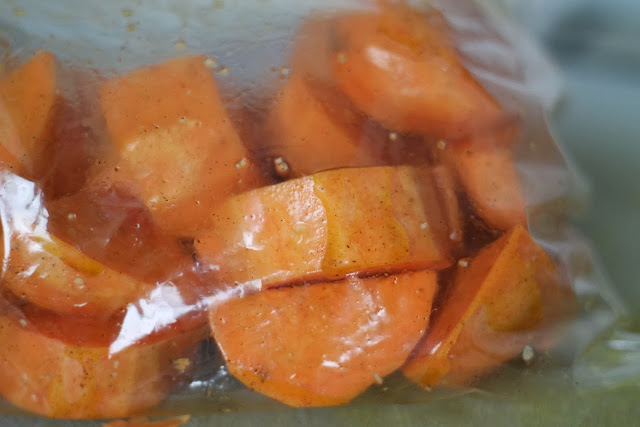 Remove the hot pan from the oven (close the door after you take the pan out to keep the oven hot) and pour the potatoes from the bag directly onto the pan. Spread evenly and put the pan into the oven. Cook for about 10 minutes, then toss the potatoes gently by shaking the pan. Let the potatoes cook for another 5 minutes and check them. If you aren’t seeing any dark spots, kick the broiler on high and watch them closely until they begin developing small dark spots, and remove them from the oven. During this process, make the dressing.

For the dressing
• 3 Tbsp unsalted butter
• 3 Tbsp bacon fat with drippings (if you made the asparagus casserole from last week, you should have some of this fat on hand)
• 1/2 cup pure maple syrup (the natural stuff)
• 2 pinches ground nutmeg
• 1 teaspoon ground cinnamon
• 2 Tbsp raw apple cider vinegar 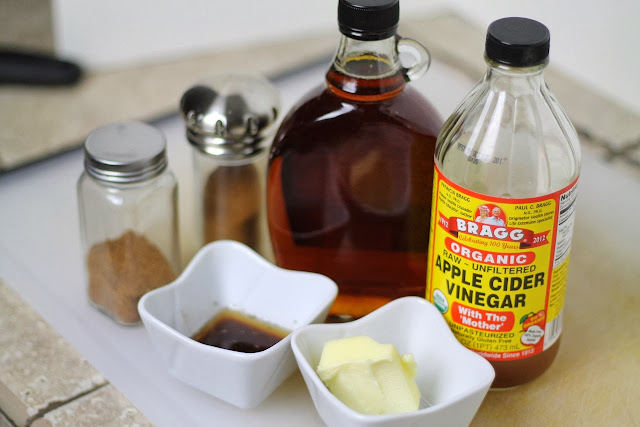 In a small pan, melt your butter and bacon fat (with drippings) together. Once that is bubbling a bit, add the syrup and swirl the pan to get it all mixed in. Add your nutmeg and cinnamon, and swirl it all up again. Let that come to a boil and add your cider vinegar. Swirl the pan some more and get it all incorporated in. Bring it to a simmer and reduce to about 3/4 its volume.

Once the dressing and potatoes are done, carefully put the potatoes into a bowl, add the dressing, and mix VERY CAREFULLY. Here’s the thing, even though we roasted at a high temp, soft sweet potatoes are still naturally soft (hence the name). If you get all aggressive with mixing the potatoes up, they’ll be all mashed and not appetizing. So take your time, use a thin spoon (using something thick like a wooden spoon won’t be able to get under the potatoes as easily, and will end up mashing them more then just using a big soup spoon or something), and even try transferring the potatoes from one bowl to another, back and forth. Serve warm. 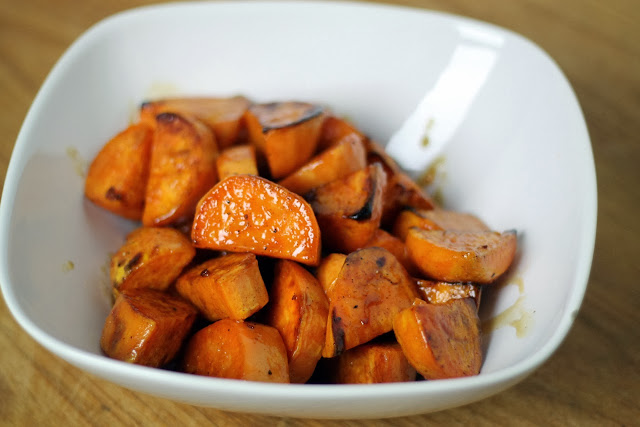 These potatoes taste toasty, have a little crunch on the outside and are smooth as velvet in the middle. The dressing has just enough acid to complement the sweetness, without becoming sour. And the little bits of bacon don’t hurt either. Close up: 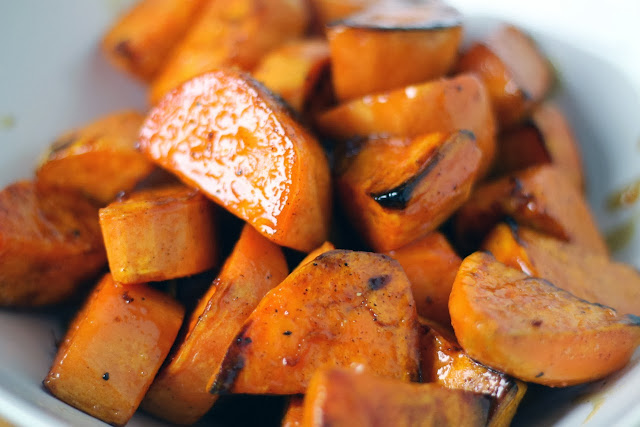 What’s your favorite sweet potato dish? Do you roast yours, or maybe you mash them up like regular potatoes (also a great way to do it)? Share the deets and, if you feel so inclined, give this version a try. I think you’ll be pleased.

See ya tomorrow, with a detailed rundown of rockin’ the turkey. 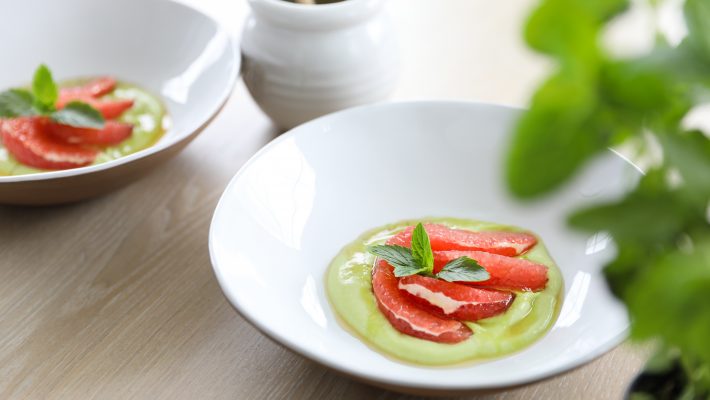 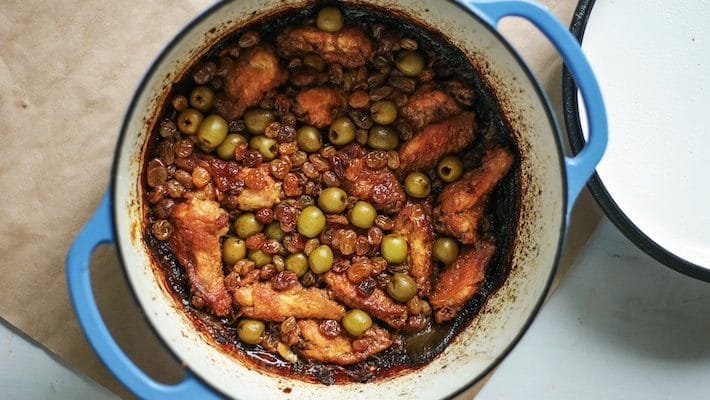