Last month we used the awkward nook in our bedroom to add an electric fireplace. We’ve loved the new vibe, but also knew that we wanted a TV above it, as well. We’ve actually had a TV in this little corner for the past couple years, but with such an improvement in that space, we knew we wanted something that would feel like part of the design – not just something threw in there so we could watch it. 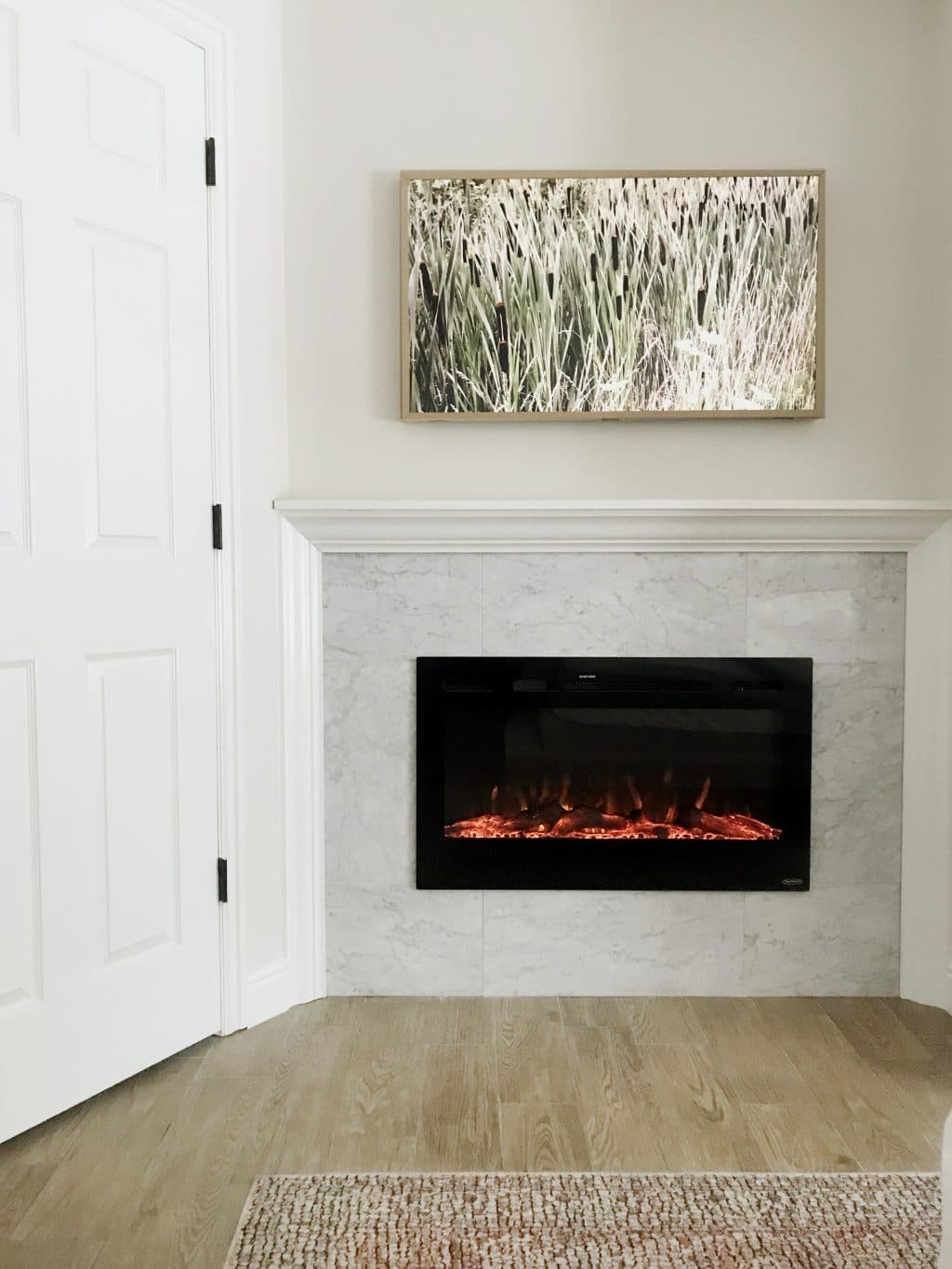 After lots of research, we decided to buy the Samsung Frame TV, and have had so many questions about it we wanted to give an honest, unsolicited review for anyone curious about it. And since one of the most common questions we received was, “Why did you choose that TV?” We’ll start there.

It looks like art.
The reason we chose this TV is because it blends seamlessly into the room, and there are a few key features that make it so. 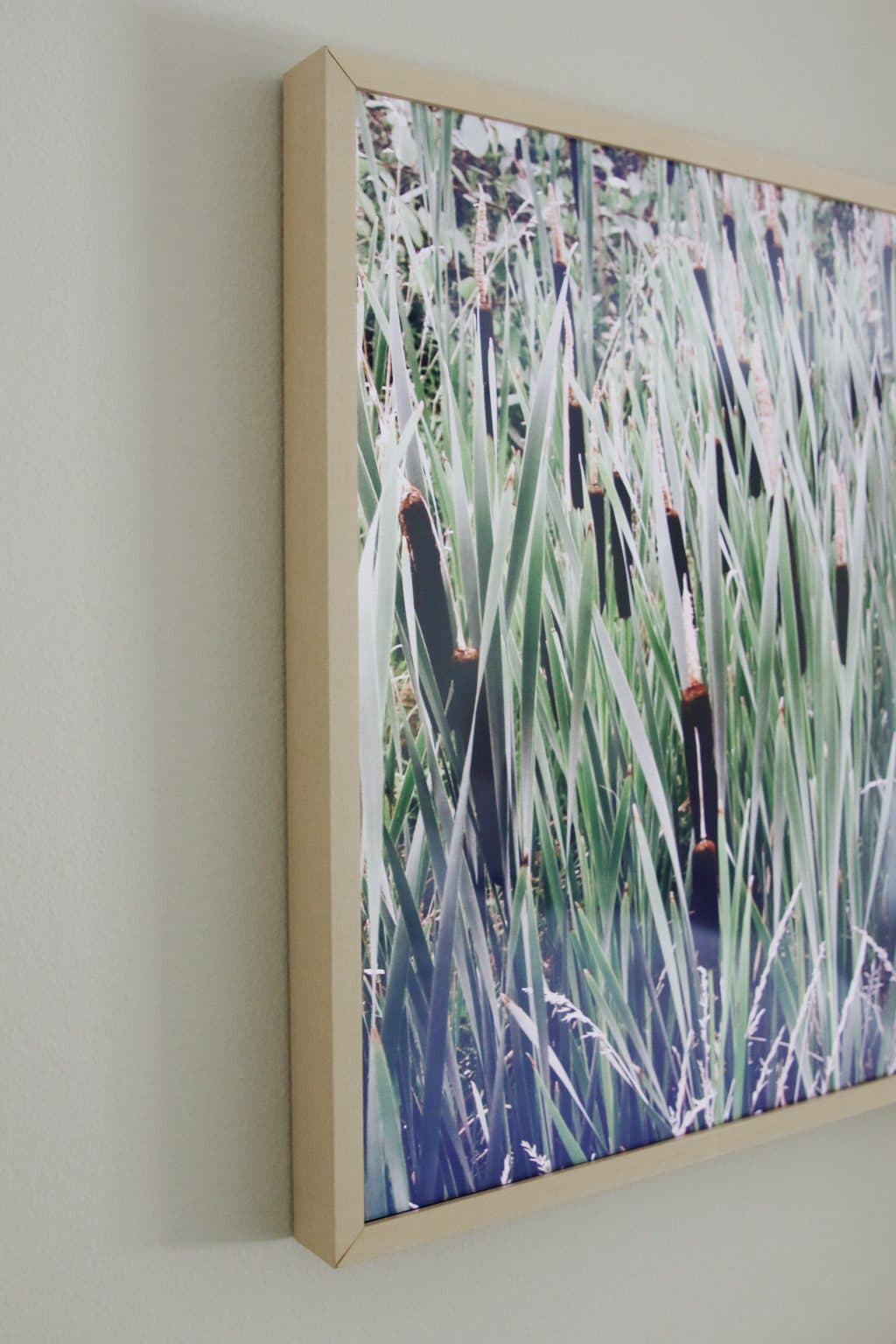 2. Frame options. Most TVs (and by that I mean all TV’s I’m aware of) just come in whatever color they come in. Usually black. The Frame comes standard in black, but you can buy white, dark wood, and light wood magnetic frames that pop into place without any tools required. We went with the light beige/wood. 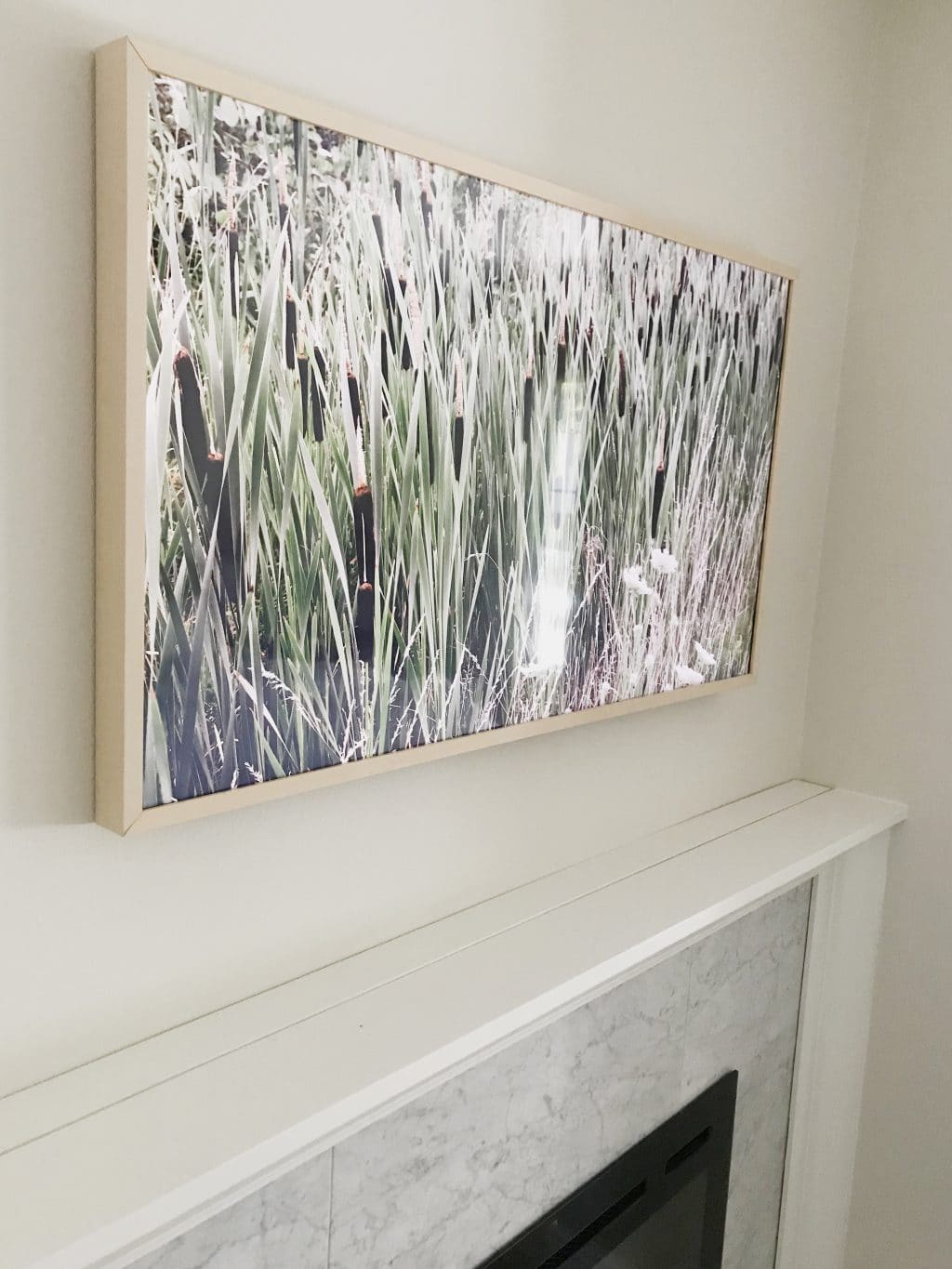 3. Art. The Samsung Frame comes with a library of art that is preloaded (seriously, close to 70ish!), as well as additional options available for purchase. But even if you don’t want to buy additional art, the preloaded options are surprisingly great, and they allow you to load any of your own personal art or photos via the app (also free, of course). I actually bought this CATTAIL print from Jenny’s Print Shop, downloaded it onto my phone and set it as the art for our TV. I’ll also definitely do something myself at some point. It’s so fun and easy to change the art. There are matte options, too.

Another great aspect to the art is the TV’s automatic color adjustments. The TV reads the ambient light in the room and automatically adjusts the brightness and contrast to keep the image looking as close to real art as possible. It’s really an impressive thing to experience. 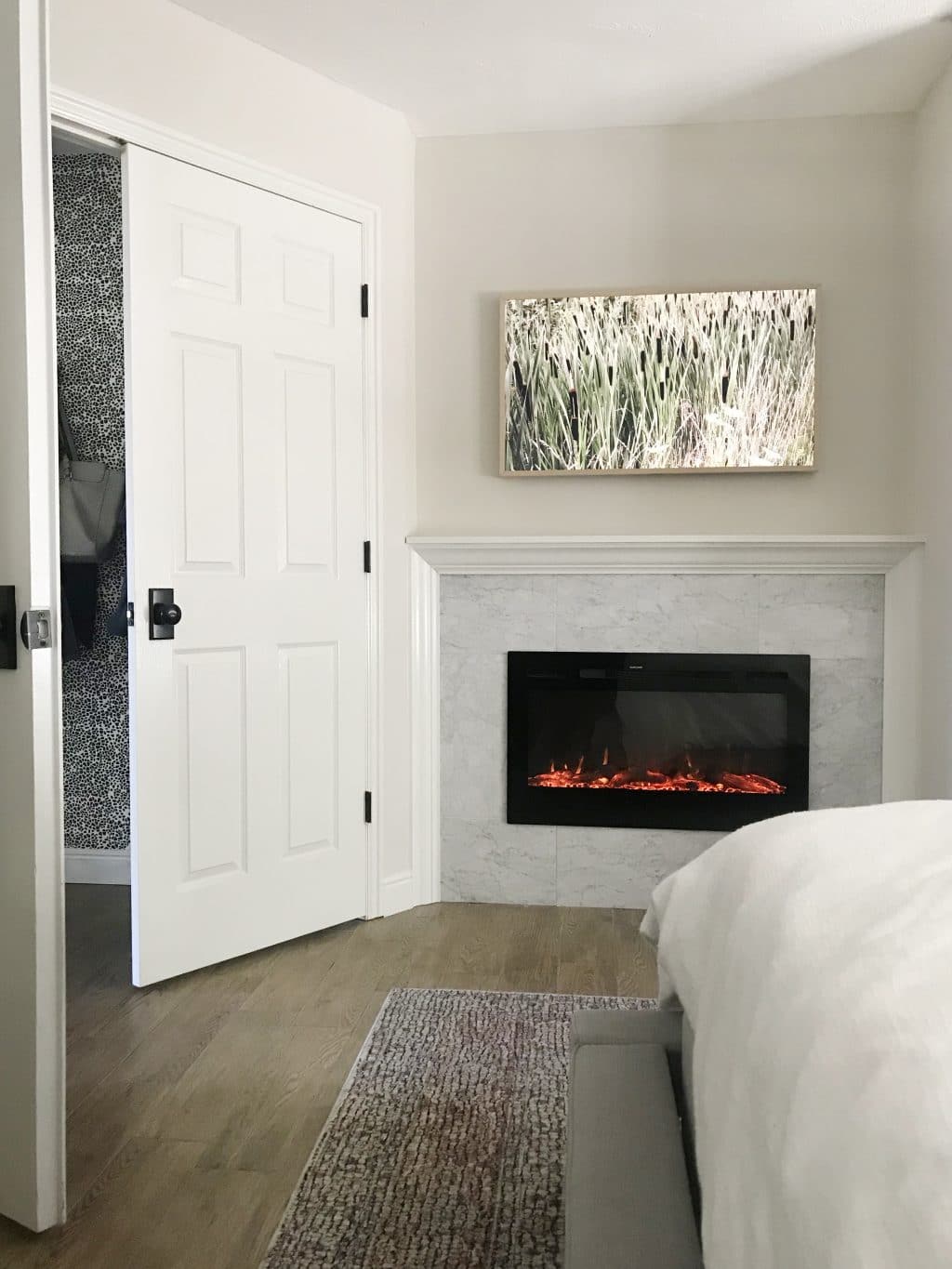 Does it use a lot of energy while on art mode?
According to Samsung, the Frame operates on around 30% of typical energy consumption when in art mode, depending on the ambient light in the room and the brightness of the screen. Typical consumption in art mode is very minimal.

Will the image burn into the screen?
The screen has been designed so as not to be prone to image burn, like other screens. But the TV also detects motion in the room and turns the screen to standby when nobody is around. It kicks back on automatically when someone comes back into the room. When you press the power button after watching TV, it automatically goes to the art mode–love that! If you hold down the power button, it turns completely off. We turn it completely off while we sleep. 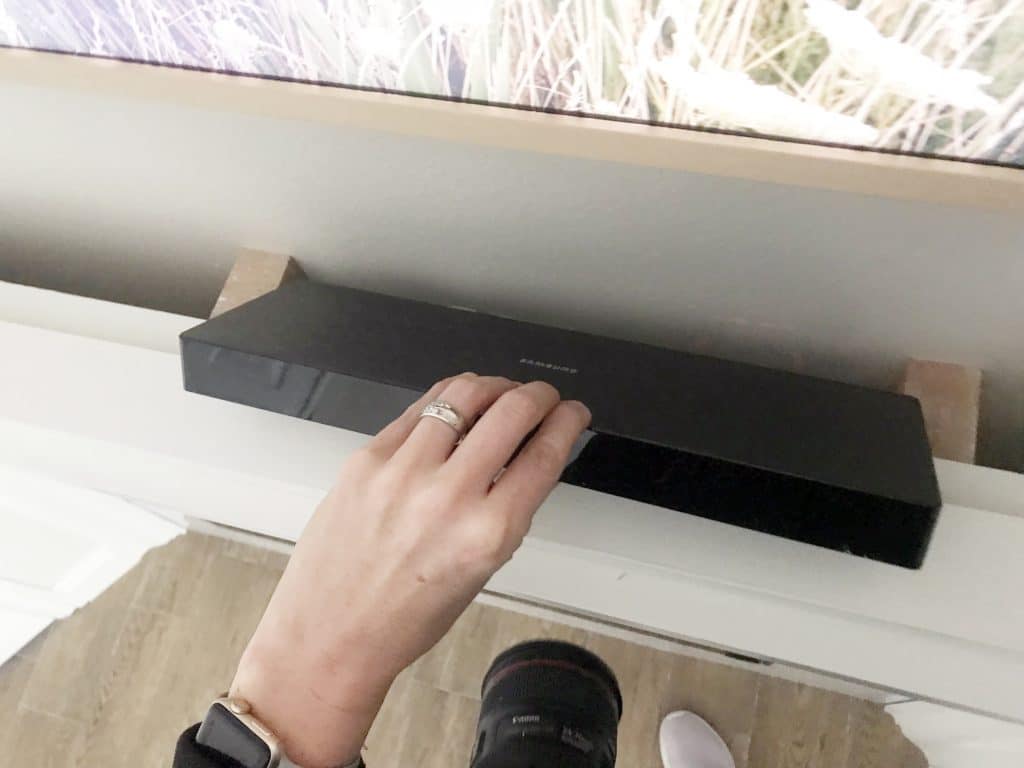 What cables does it have and how do you hide them?

In order to keep the TV as thin as possible, a lot of the actual “thinking” components are stored in a separate box (also included with the TV). There is a single, slim cable that runs from the TV to this box that transfers the image signal as well as power. 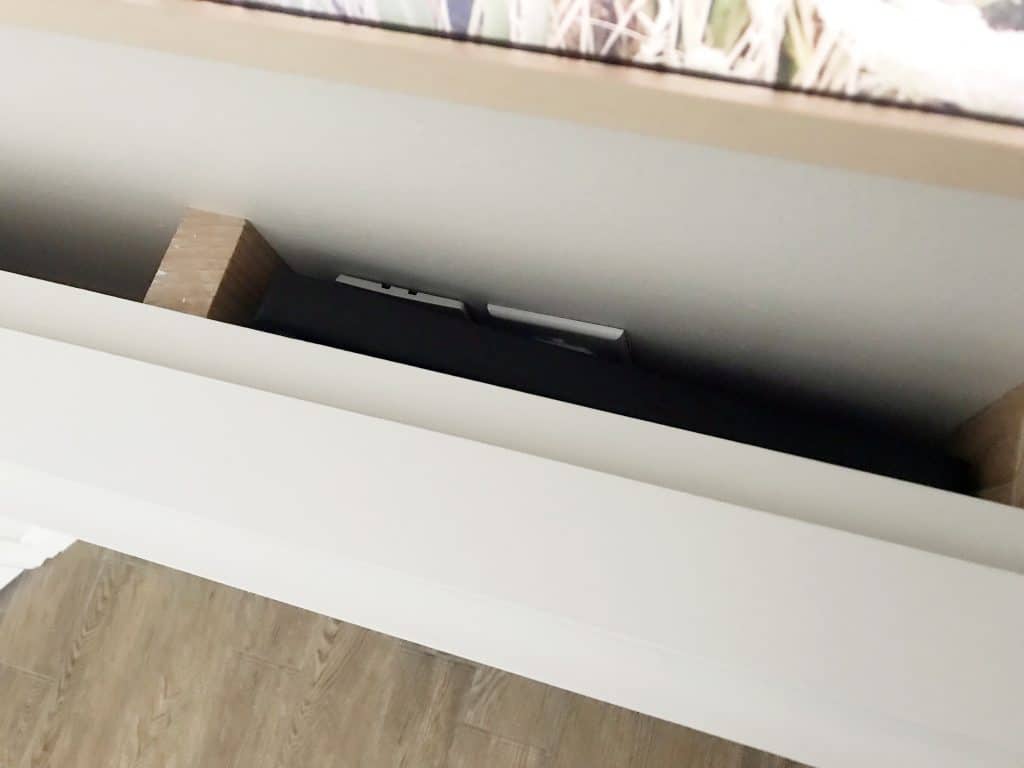 All other components are meant to plug into the box as well. That includes things like sound systems, Blu-Ray players, gaming consoles etc.. To keep cable clutter minimal, you’ll want to plan for somewhere this box can hide. For us, we made the back section of our mantle removable, and the box sits right inside there. We went one step further and ran the cable through the wall, so there’s no visible cables at all. Because the TV is a smart TV, it’s loaded with netflix, hulu, amazon prime–the works!

The remote for the box is RF, which means it runs on a radio frequency so the box doesn’t need to be line-of-site in order to work. You can hide it somewhere and, as long as the radio signal from the remote can reach it, it’ll work great. 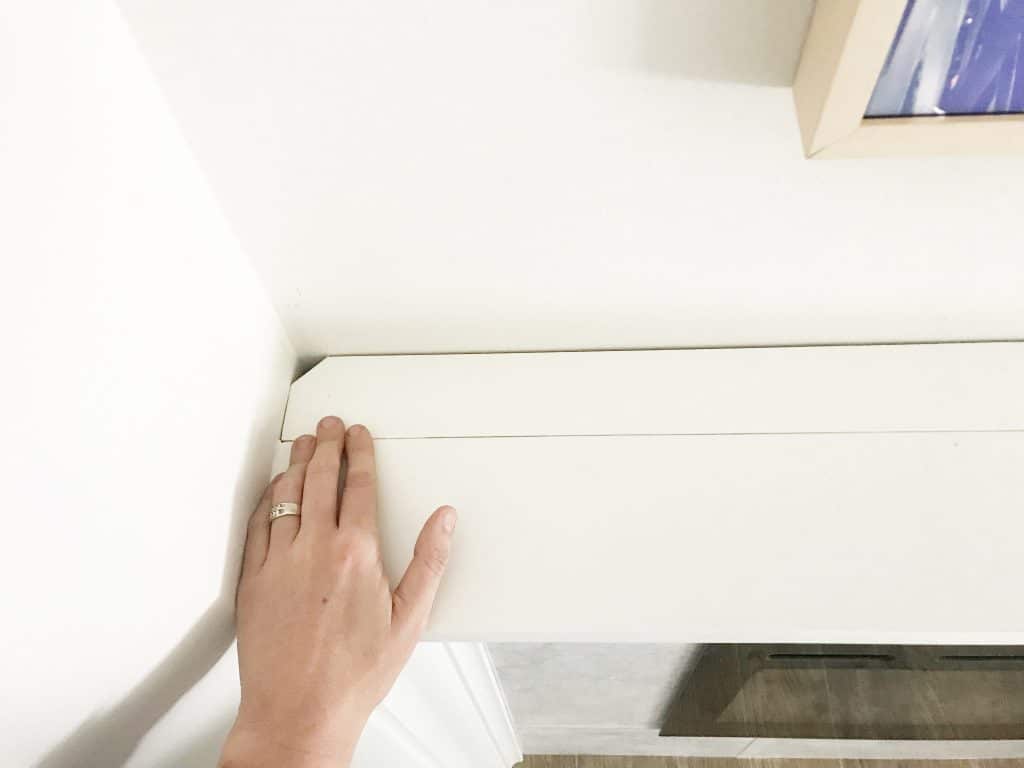 So, all that said, do we like the TV? Unequivocally, yes. The image is crisp and clear both in TV mode and art mode. The Smart features of the TV make it super functional. Instead of having a dark blank box on the wall when we aren’t watching TV, the Frame switches function (instead of just switching off) and enhances the room it’s in, at all times. We would suggest this TV again and again and hope to use a few of them in the cabin as renovations continue up there. 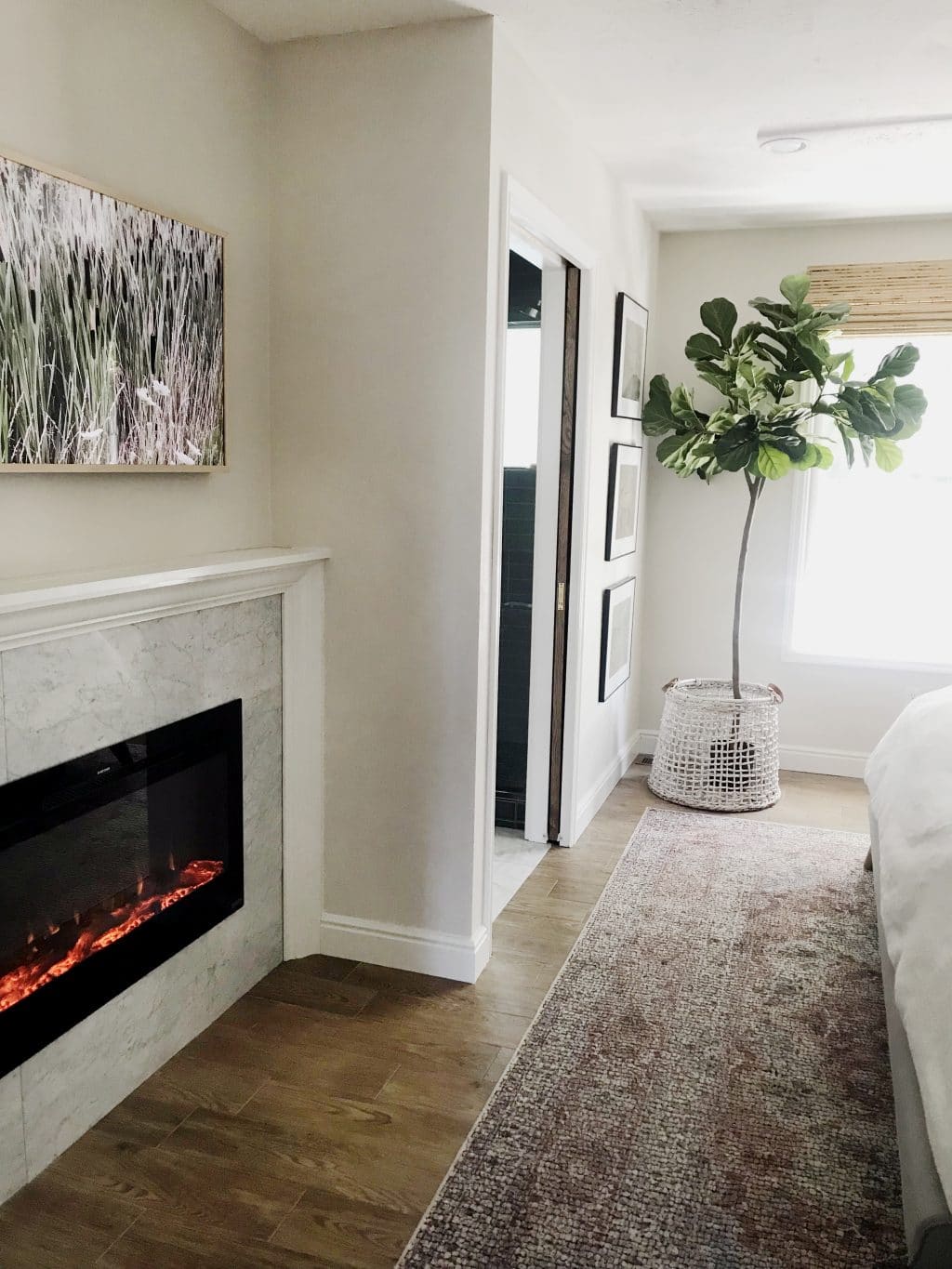