So it’s a new year, and a fairly standard resolution is to eat healthier. That goes good for a few days, but pretty soon we remember that it’s still the middle of freaking winter and we need warm, comforting foods for crying out loud. Well I can give you at least one option.

It’s called Pho (pronounced “fuh,” and believe me there’s no shortage of “f-word” related jokes associated with this dish). It’s essentially a piping hot, Vietnamese noodle soup with a rich, flavorful broth, and it’s so so so good. Takes a bit of time, but well worth it and really cheap (which also helps with the resolution to be more thrifty, er something). 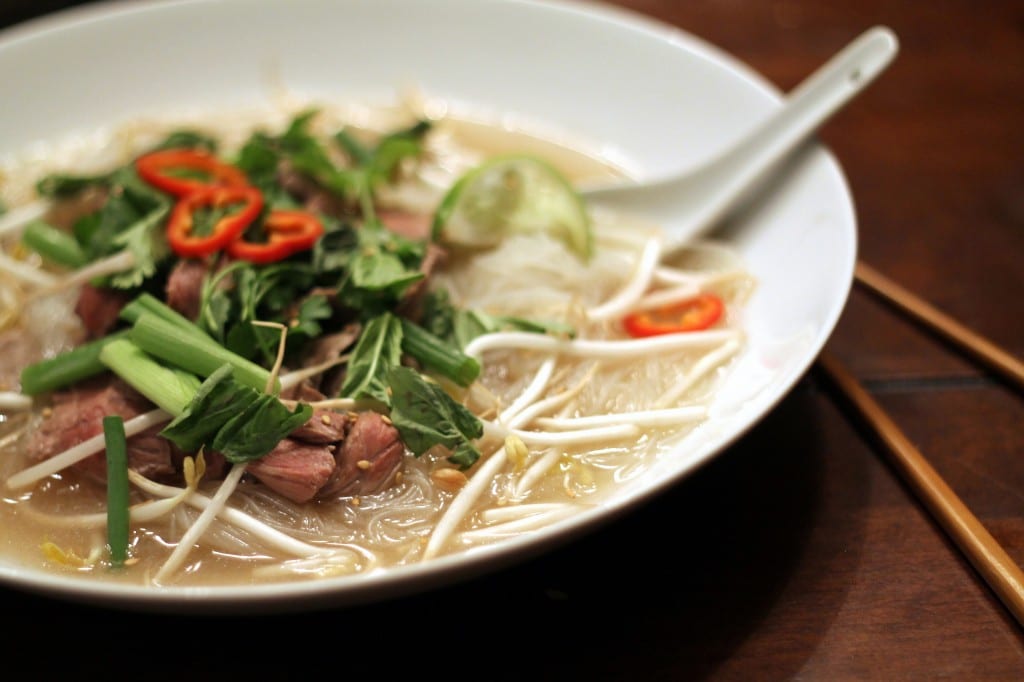 We’re gonna break this into 4 parts: broth, soup, garnish, condiments. Let’s begin with the broth, shall we?

Broth
The broth for this soup is super easy and only has a few ingredients. Namely: 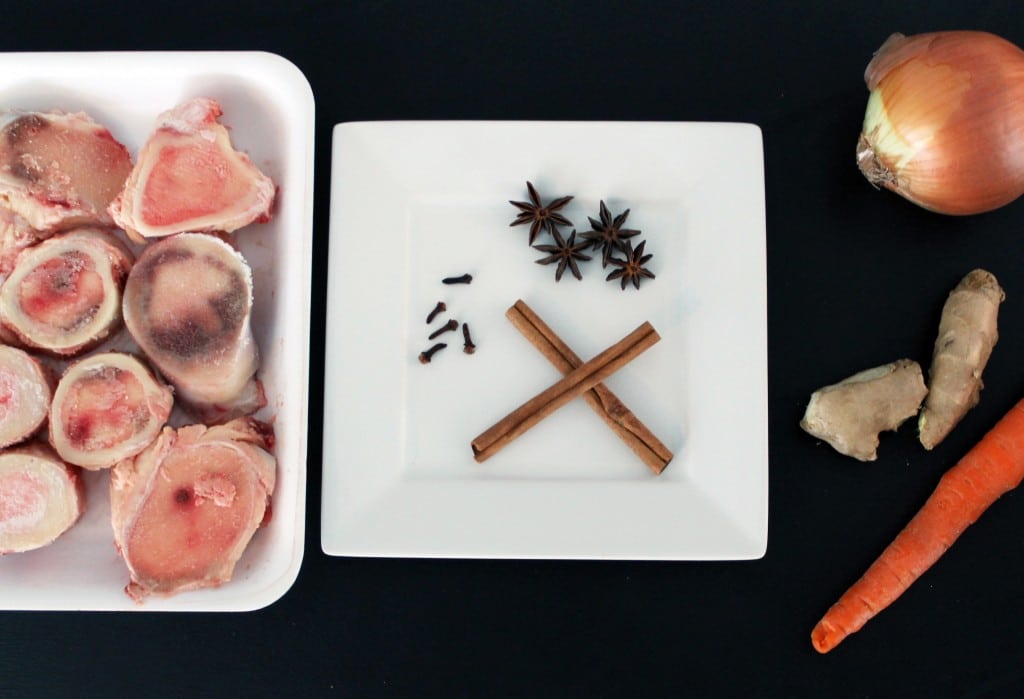 A lot of pho recipes call for beef tendon and other odd things. I’ve had it with beef tendon and decided it wasn’t my thing, but if you want to try stuff like that, go for it.

My recipe is mostly traditional, with a couple twists. First, and this is optional but, I roast the bones. Not common, but I like the depth it adds. If you forego this step, simply put the bones in the water and boil for 10 minutes, skimming the foam every couple minutes before adding the rest of the ingredients. If you choose to roast the bones, simply put a baking sheet in a 425 degree oven and let it heat up. Then put about 1 Tbsp of cooking oil on the pan and slide the bones on, roasting them for 15-20 minutes until they start developing some nice coloring. If after 15 minutes you don’t see much by way of color, go ahead and turn on the broiler for a few minutes, keeping a close eye on it. 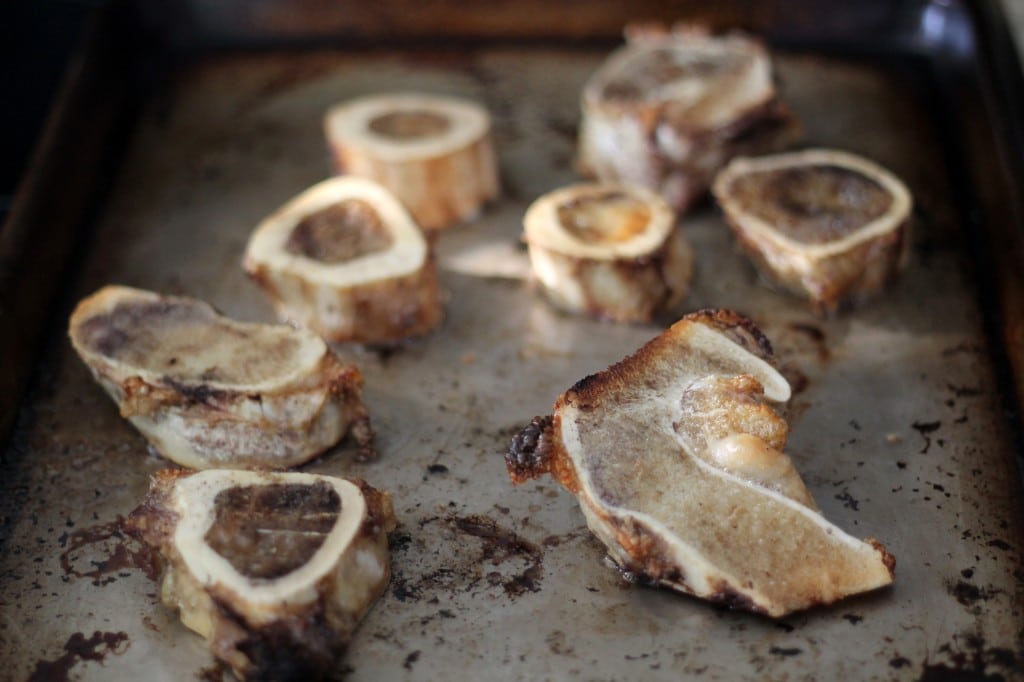 When the bones are about halfway done roasting, put your 6qt+ pot on the stove and turn to medium-low heat. Now, it’s important to note that bone marrow is very fatty. You may be thinking that’s bad for the whole “eat healthier” thing, but we’ll deal with that later. Right now, we want that fat in the broth because it adds flavor, and lots of it. BUT, when you roast the bones, a lot of that fat melts out onto your baking sheet. So, when you take the bones out of the oven, add them and the melted fat on the baking sheet straight into the heated pot, along with everything else, and bring to a boil. Once boiling, reduce to low and simmer for 3-4 hours.

Some people swear this broth needs to simmer for several days, but all evidence supports the notion that the bones have released all their flavor by about 3 hours. Oh, and btw, get ready for your entire home to smell as divine as anything you’ve ever smelled. Seriously, the aroma is out of this world. 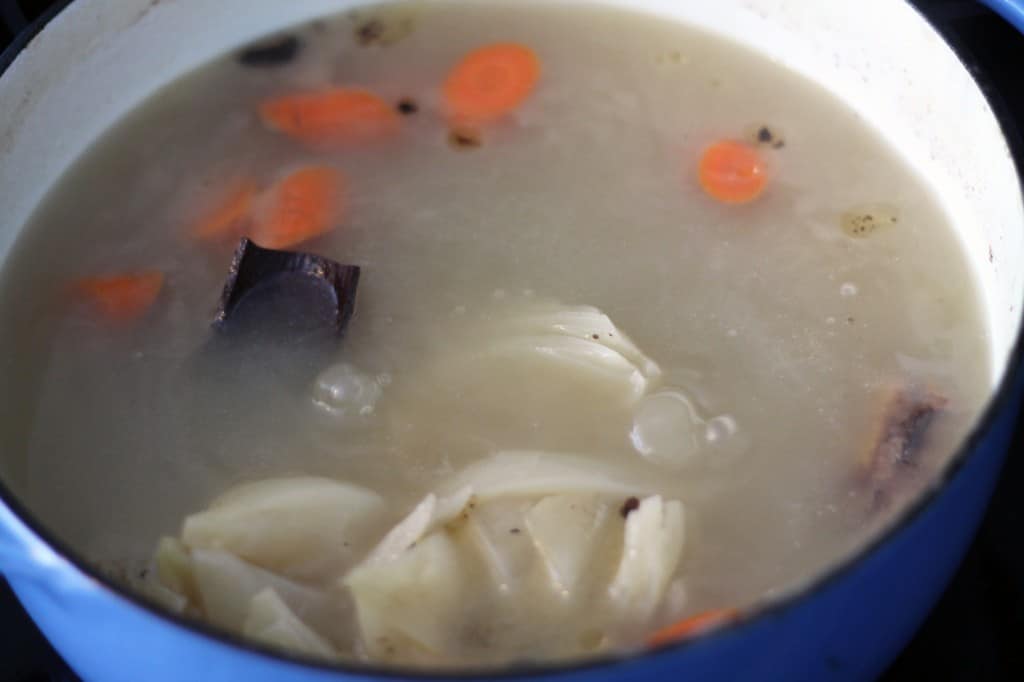 The above picture is after the broth finished simmering. You can see it’s fairly cloudy, and that’s because there’s a lot of fat mixed throughout it from the cooking process. If you were to just strain and use this hot broth right now, it would end up quite heavy and greasy. Not what we’re going for. For this reason, we cool the broth completely and let it sit until the fat rises to the top and becomes solid, then we remove the fat. BUT, absolutely do not take this ridiculously hot pot, full of ridiculously hot liquid and put it in your fridge or freezer. When you put hot things in your fridge/freezer, it raises the temperature in there. Sometimes by as much as 30 degrees for up to 8 hours. This brings all of your food into the temperature danger zone for far too long and is a good way to make people sick. At the least it’ll make your milk taste funny. So I’ll often put ice in a ziplock bag and stick it in the pot and swish it around until it’s cooled off before putting it in the fridge. Or, since it’s winter… 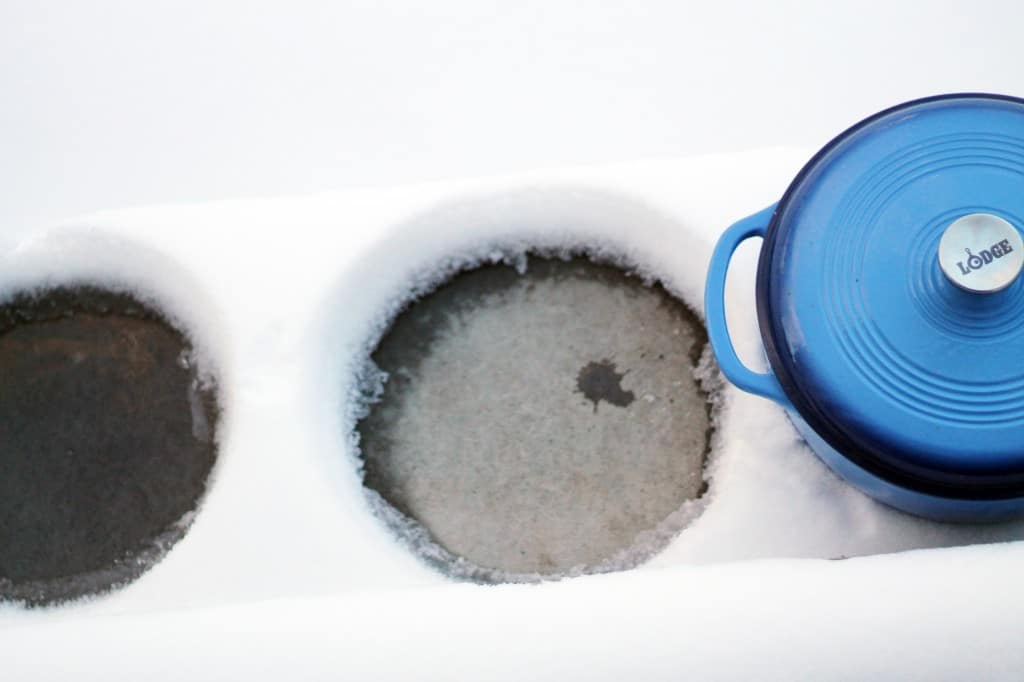 I just keep my lid on and put the pot in the snow, moving it around as the snow melts. The entire thing was refrigerator-cold in less than an hour. Just make sure you won’t have any curious animals coming after it. I kept Charly inside.

After the broth has cooled and separated and you’ve removed the visible fat, strain out all the bones and other things so you’re just left with the liquid. Store this liquid in the fridge until you’re an hour or so out from eating.

When you’re getting ready for dinner, put the broth in a clean pot and bring it to a gentle boil. You’ll likely have some foaming going on, so skim the liquid every few minutes to keep it clean. It’s a bit of a process, but removing the fats and impurities is what makes this broth so light, and it’s worth the effort. Keep the broth simmering while you get everything else ready.

Garnish
I’m gonna jump to the garnish next, because I like to prep my garnishes while the broth is cooking the first time. This way I can just have them ready and take them out of the fridge when it’s time to eat.

With pho, it’s important to note that when I say “garnish,” I don’t mean it in the “kale leaf under my steak from the Sizzler” kind of way. The garnishes for pho are an important part of the dish and are meant to be eaten, not just looked at. There are lots of things you can add, but here are a few of my favorites: 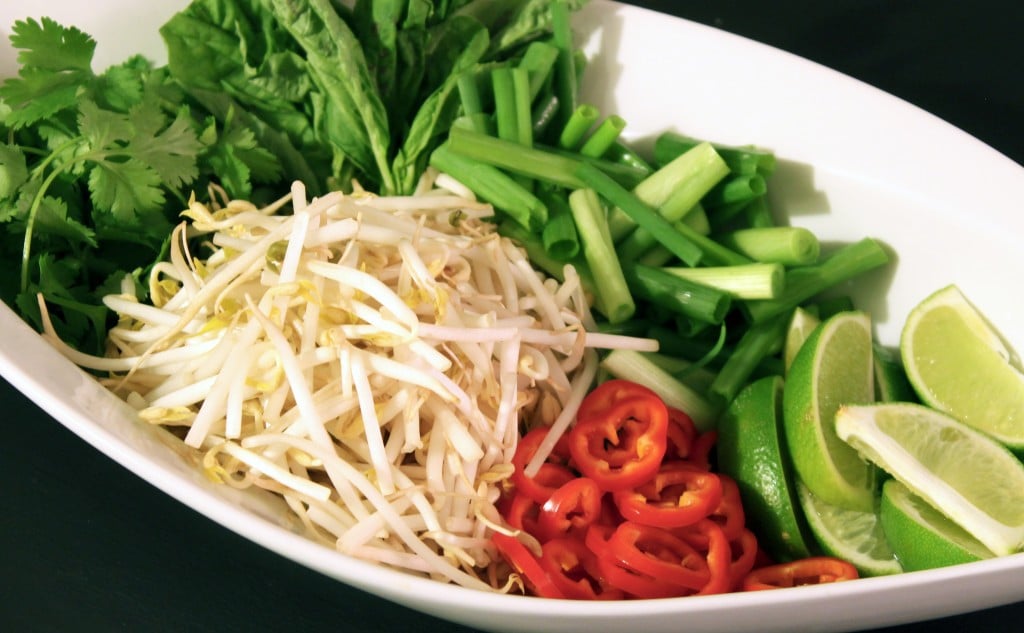 Simple prepare them as shown above and have them ready.

Soup
The broth is the base of pho, but we still have a few things to add for it to become soup. 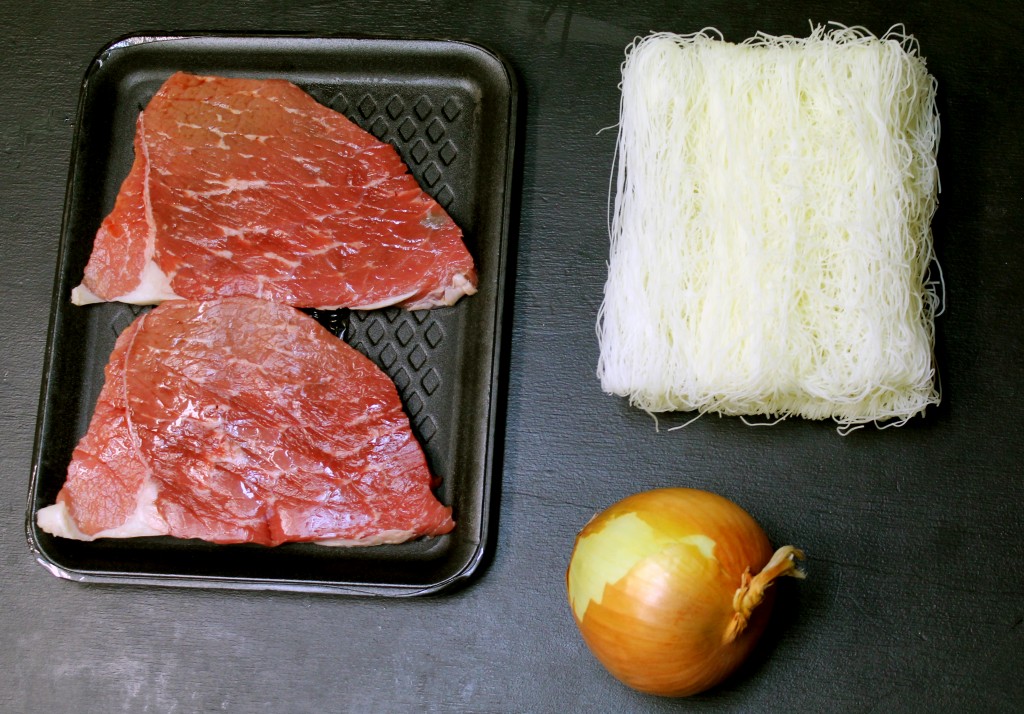 • beef of some kind. Pictured above are bottom round steaks, but other options include:
– brisket
– beef tenderloin (you fancy pants, you)
– beef brain or heart (pretty traditional, not my thing)
• rice noodles. I like the thin rice sticks, because it’s almost like angel hair pasta, which I love. But you can use wider noodles if you want
• 1/2 yellow onion

To prepare the beef, remove the fatty parts and slice it thin. Soak the noodles in hot water for 20 minutes. Slice the onion very thinly. Just have all that stuff ready to go.

Assembly Time
Assembling the soup is really easy. Put a pot of regular, plain water on another burner on high and bring it to a boil. Drop a handful of noodles into the water and boil for 10-15 seconds, then take them out and put them in a bowl. Take a small handful of beef and put it in some sort of strainer and quickly drop it in the hot, simmering broth for about 15 seconds. 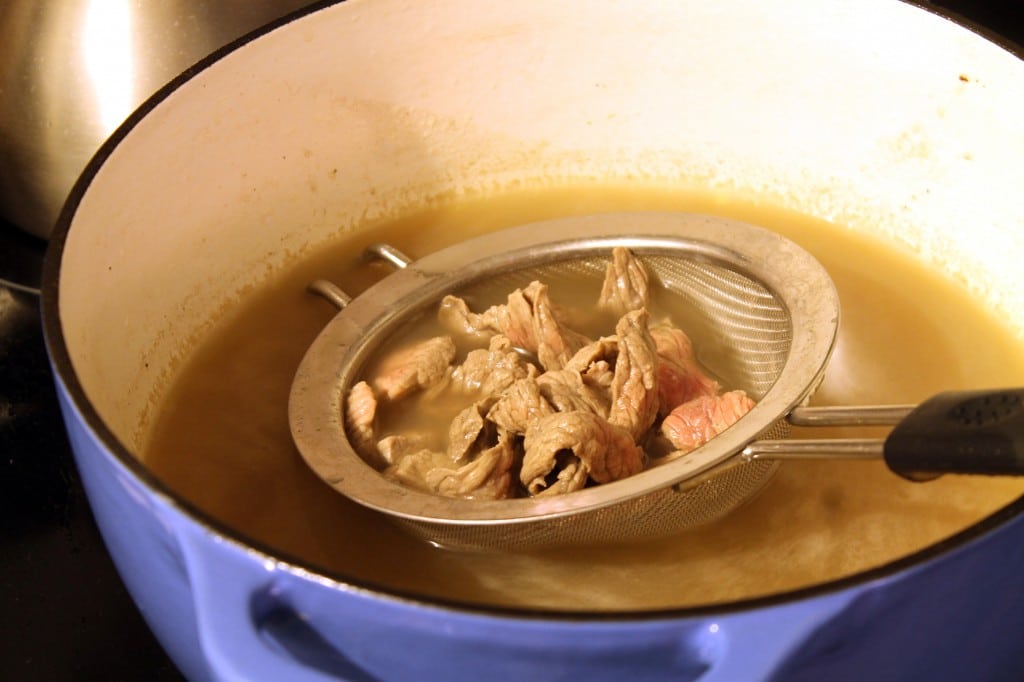 Put the beef on top of the noodles, then add a few ladles of the broth directly over the beef. Serve it to people you love, along with the garnishes and: 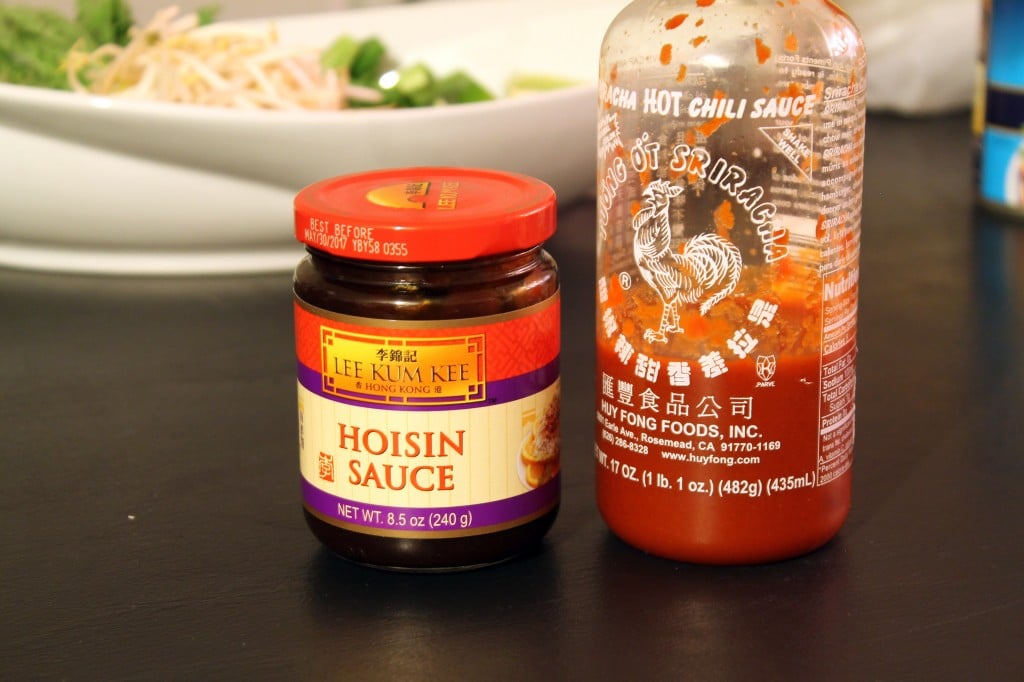 Each person should have plenty of hoisin, and Sriracha depending on their desired spice level. Dab your chopsticks into the hoisin and swirl it around in the noodles. As you continue to eat, the broth just becomes more and more flavorful, and the entire experience is just so satisfying. 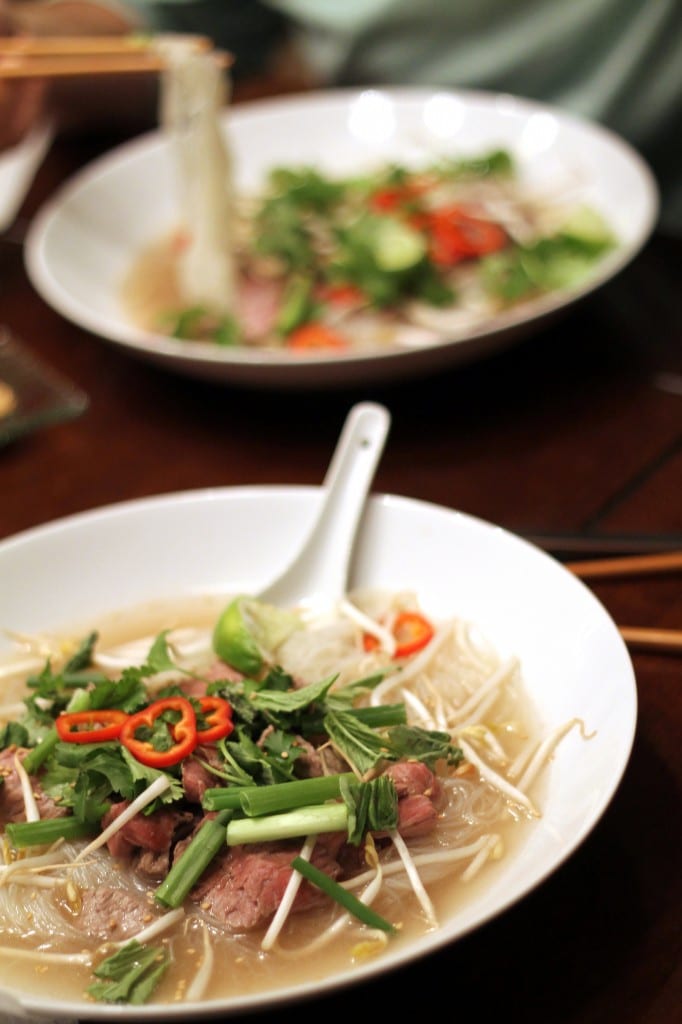 If you’ve never had pho and it sounds a little strange, no joke you should seriously try it. The flavors are deep and warm. You can eat this soup until your stomach is about to burst, but you still feel great because of how fresh and light it all is. And even though the soup takes an entire day to make, it’s not like you have to pay attention to it all day. It’s actually fairly hands-off and easy to make.

Have you had pho? What makes up your favorite version? Whatever it is, try making it at home and be sure to let us know how it goes. Cheers, friends.

« Molded Plastic Chairs for Every Style and Budget (and In Our Dining Room, Too!) 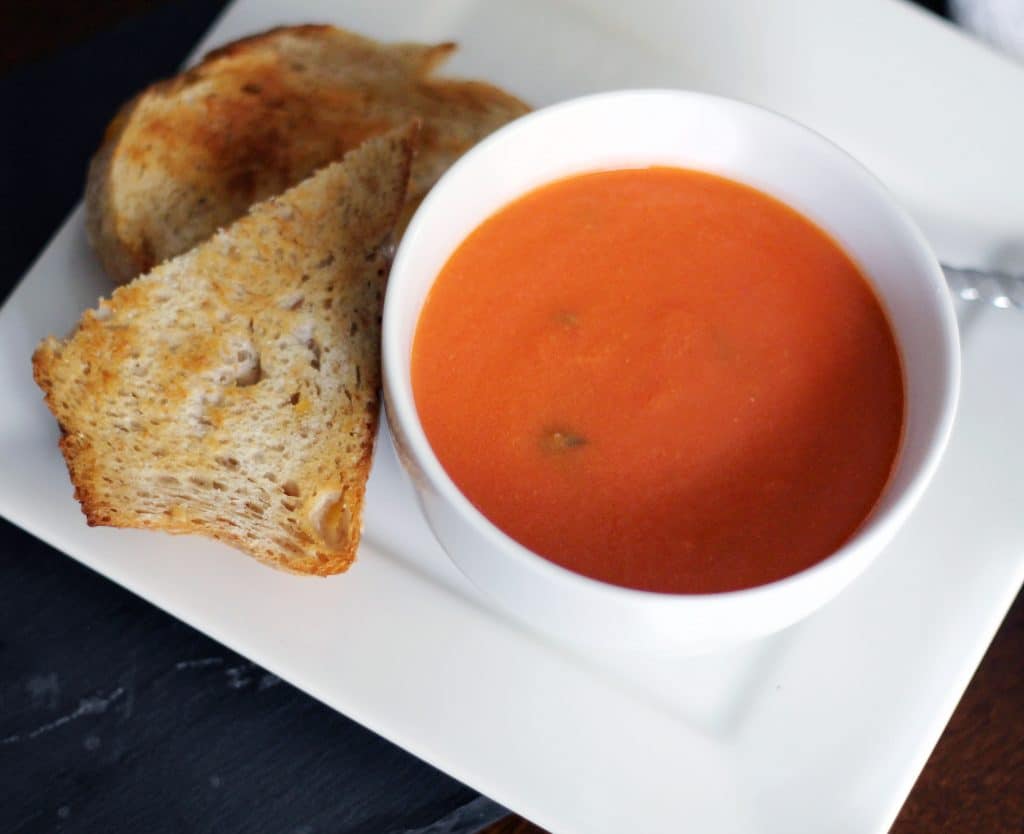 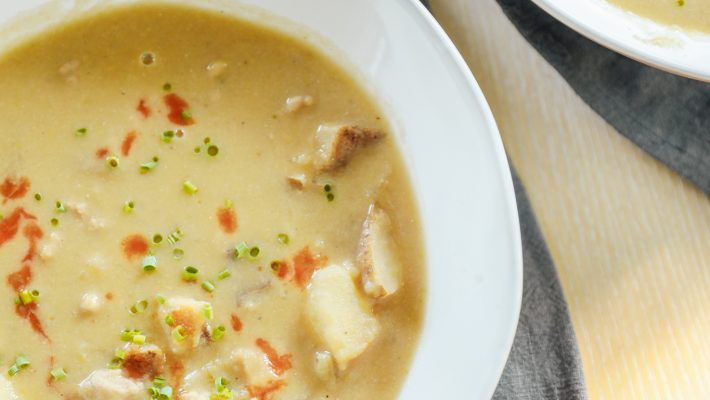 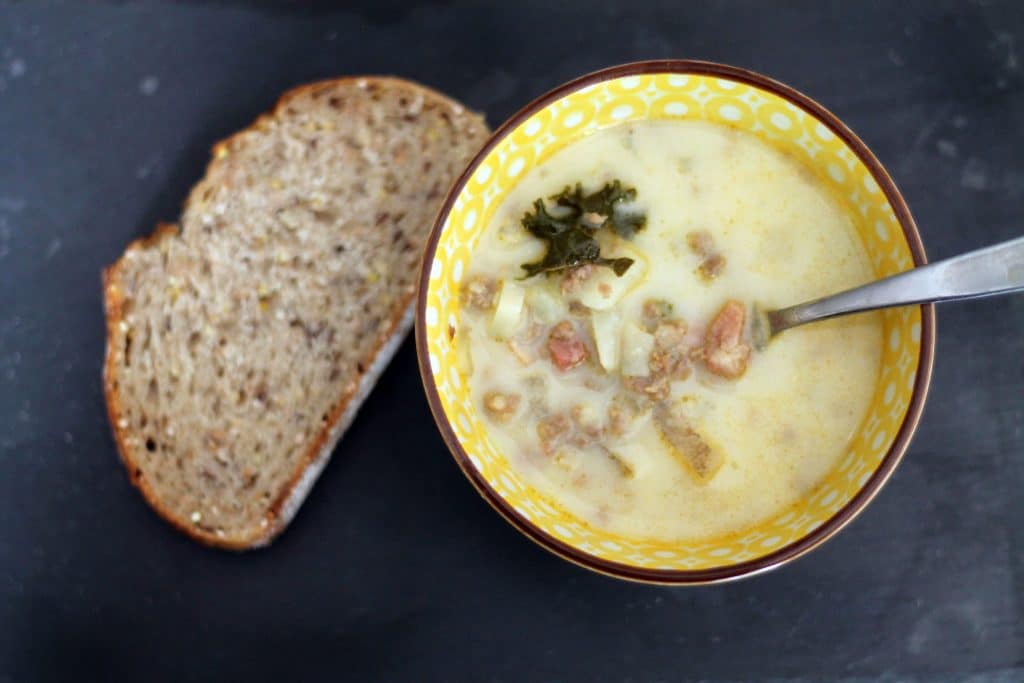