The ceiling fan had to go.  Not because we’re not fan fans.  Because we are.  But I can’t remember one time when we actually used it.  The chains were stuck for awhile so initially we couldn’t use the light without also having the fan on–so we opted out of both.  So really, this huge, room-shrinking, useless contraption hung in our family room for 11 months just taking up space and collecting dust. 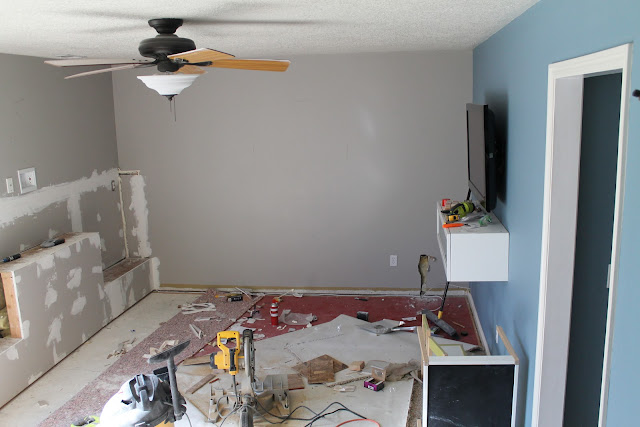 The plan was to replace the ceiling fan with six recessed lights to evenly disperse light throughout the entire room and visually de-clutter and heighten the room.  We had some money on our True Value gift card leftover from our guest room reno, which we bought the can lights with–but we needed someone to run the wire for us.  We thought if we provided the can lights and actually installed them ourselves, it shouldn’t cost that much for someone to come in and cut holes and run wire.   I called 6 or 7 different electricians to get estimates.  I was shocked when our lowest estimate we received was $250–but he warned us that he may have to take the whole ceiling down.  We were floored when one electrician quoted us $650–and that was 50% off because we were providing and installing the lights ourselves.  We had to sit down after that one, regroup, and then decide what we were going to do. Because this room is not a new construction (meaning the walls and ceiling are in place), doesn’t have attic access and furthermore has two bathrooms above it–we were warned there wasn’t a more difficult room to wire.  Even with the warning–which may have been a ploy to hire the electician, we knew our budget of $4000 for the entire renovation quickly shrinking, so we decided to tackle it ourselves.
First we planned where each can was going to go and then made sure their future homes weren’t butting into any floor joists–that wouldn’t work.  When we were in the clear there, I made a template by tracing a bowl that was slightly larger than our 6″ cans and traced in on the ceiling.  Our first cut using a reciprocating saw revealed our worst fear: 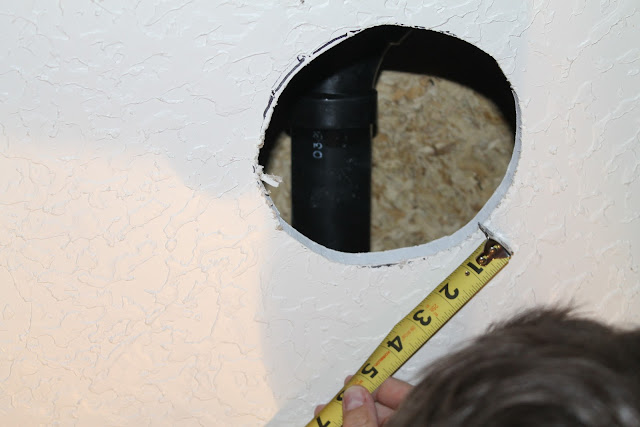 A pipe from the upstairs bathroom.  This didn’t just mess the placement of this hole up–but all of the other holes that we planned out.  They would no longer be in line or evenly placed.  But with one hole cut, we could do some investigating up there.  Flashlight in hand, Chris and his brother, Brandon quickly reconfigured all of the holes and got them cut out.  When I say “quickly” I mean it took a couple hours.  We had to keep in mind window, pipe and ductwork placement. 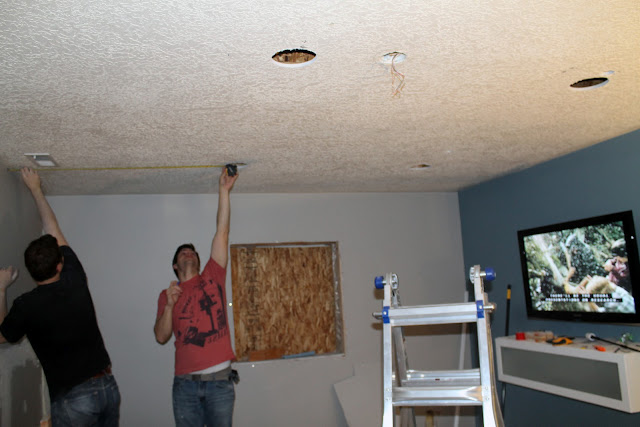 When it came time to actually run the wires, we made small 2″ holes in the ceiling to make navigating over and under pipes and through floor joists and duct work a little easier.  The concept is simple:  run a length of wire from one hole to the next so that when you wire the lights in, it makes a large circuit.  It takes some patience, a few extra holes and, in our case, a wire hanger to fish the wire through the ceiling but we got it done.  By the end of the first night we had our holes placed and cut and the wires run.
The second day I patched all of those holes we made.  Including the new holes for the vents–we had a total of 17 patches.  It may sound like a lot, but considering we were told more than once that we would have to remove the entire ceiling–we are still patting ourselves on the backs. I went over how we patched the vent holes here, as for the holes made for the lights that ended up not using (that happened three times)–they make easy peasy patches for those: 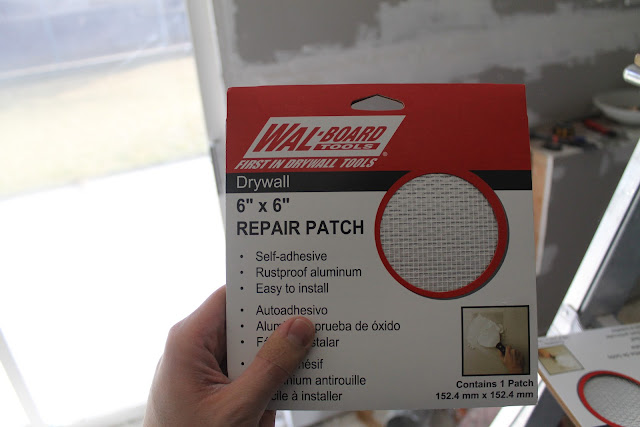 It’s self adhesive, so you just stick it up there and slap some joint compound on it–and then, in our case, texture it.  For the smaller holes we made to help fish the wire through–I held onto the little discs that we cut out and attached self-adhesive mesh tape and stuck it back in the hole and then spread joint compound over it. 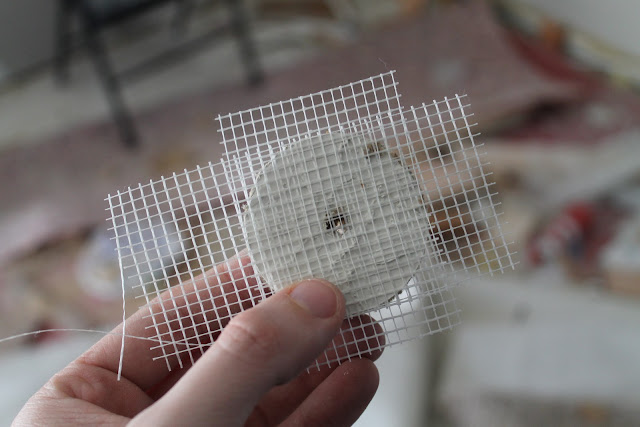 Our patchy ceiling looked scary for a minute: 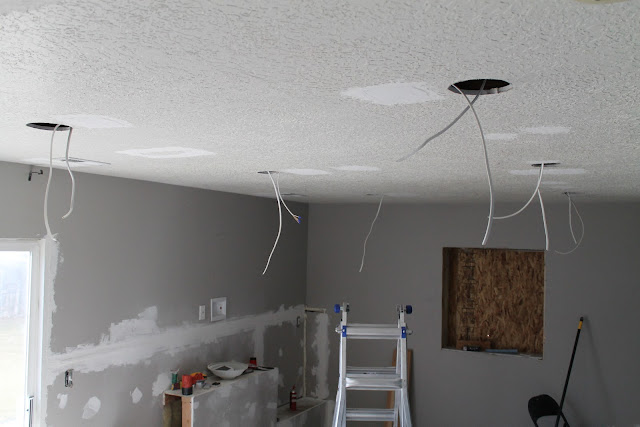 But after retexturing and a paint job–we were left with an almost seamless look. 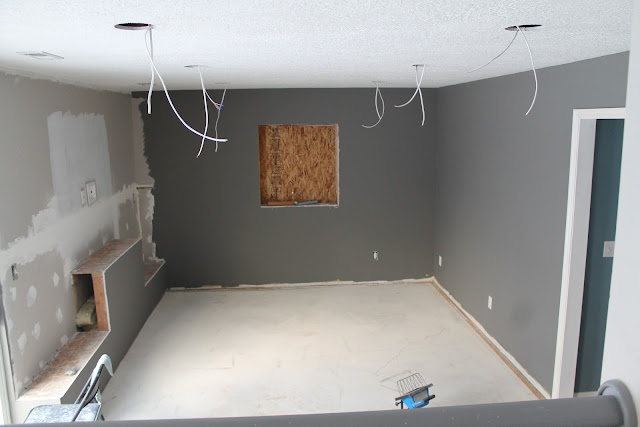 Actually wiring the lights took less than an hour.  I filmed Chris giving you the complete rundown on how-to:

We also switched out our normal switches for dimmers, which I’m officially obsessed with.  Especially in a media room–dim lights are nice to have.  All in all, installing our own recessed lights wasn’t perfectly smooth.  We hit a few bumps a long the way, but we did it.  And it wasn’t that hard–even for us first-timers. It definitely wasn’t $650 hard.  We’re glad we saved money and did it ourselves, although it wasn’t completely free.

$59 on can lights and dimmer switches–thanks to a big help from the remaining balance on our True Value gift card.
$25 on electrical wire.
$30 on patches and joint compound.
$0 on labor.  :)

Total: $114.  Way below the amount we were quoted for labor to just run the wire. This renovation is a great example of saving on some projects and products and splurging on others.  We splurged on our new couch and the carpet we wanted–and other things like electrical and framing out and sheetrocking our own wall we are saving loads of money by doing it ourselves.  It’s pretty addicting.  And the results aren’t too shabby either. 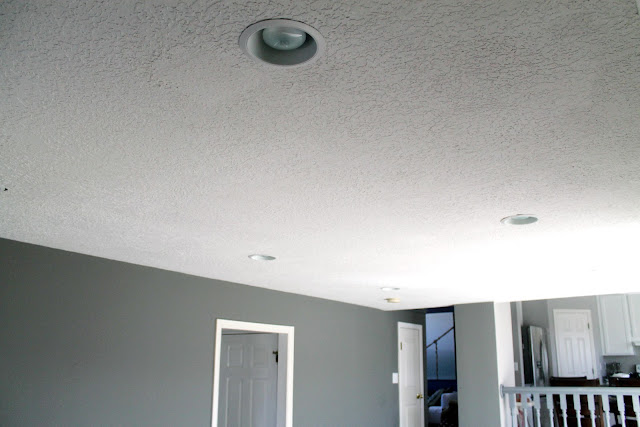 Psst.  I owe you more after shots of this project.  I am well aware.  But we are working on about 3 other things simultaneously for this room and this was the only shot I could give without teasing the heck out of the other projects. Although we are anything but a before and after blog (we like to share every detail as we go), we also like to dedicate posts to one aspect of the transformation–especially lengthy posts like this one.  Hang tight, a full span is not far away. 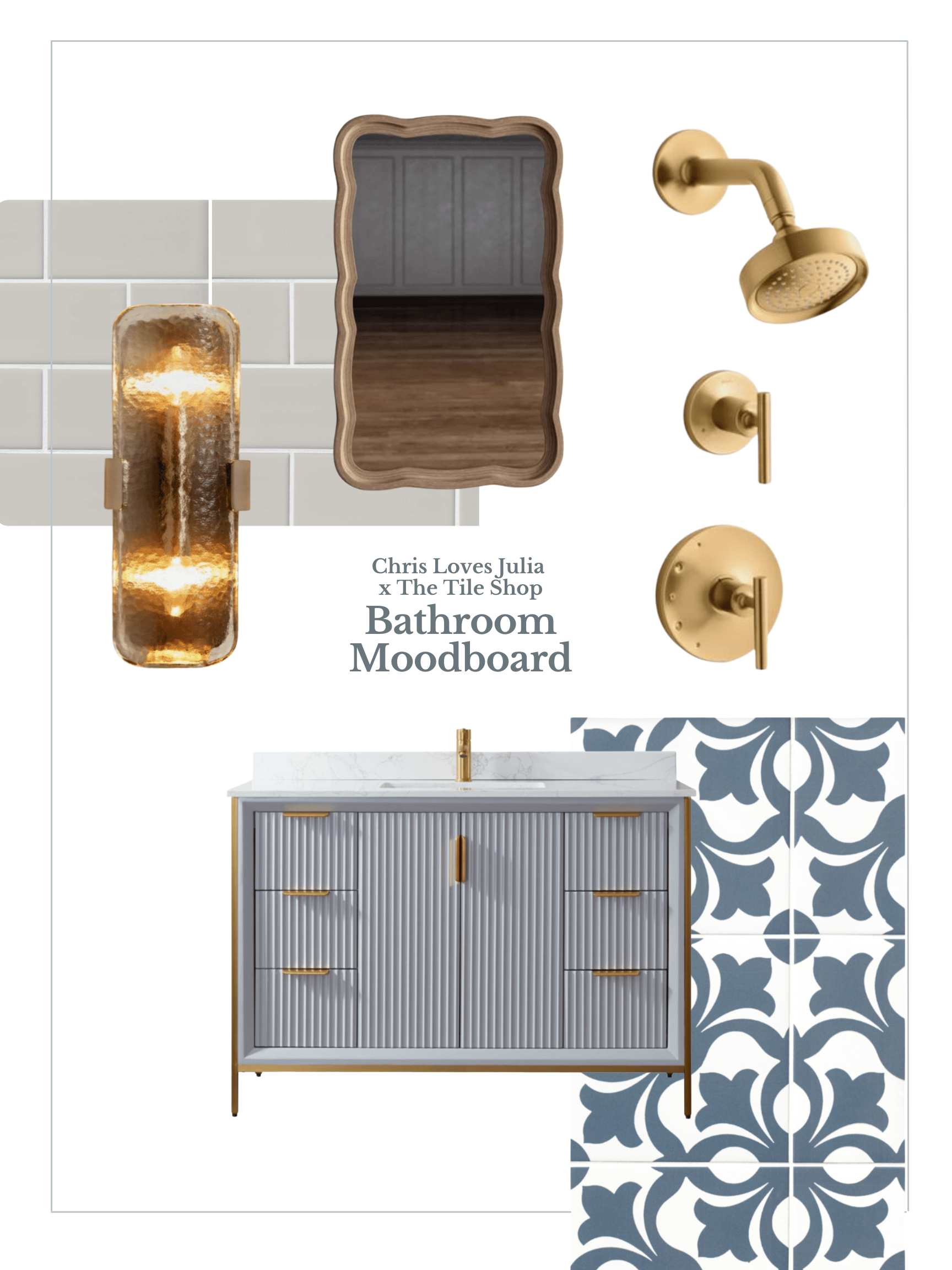 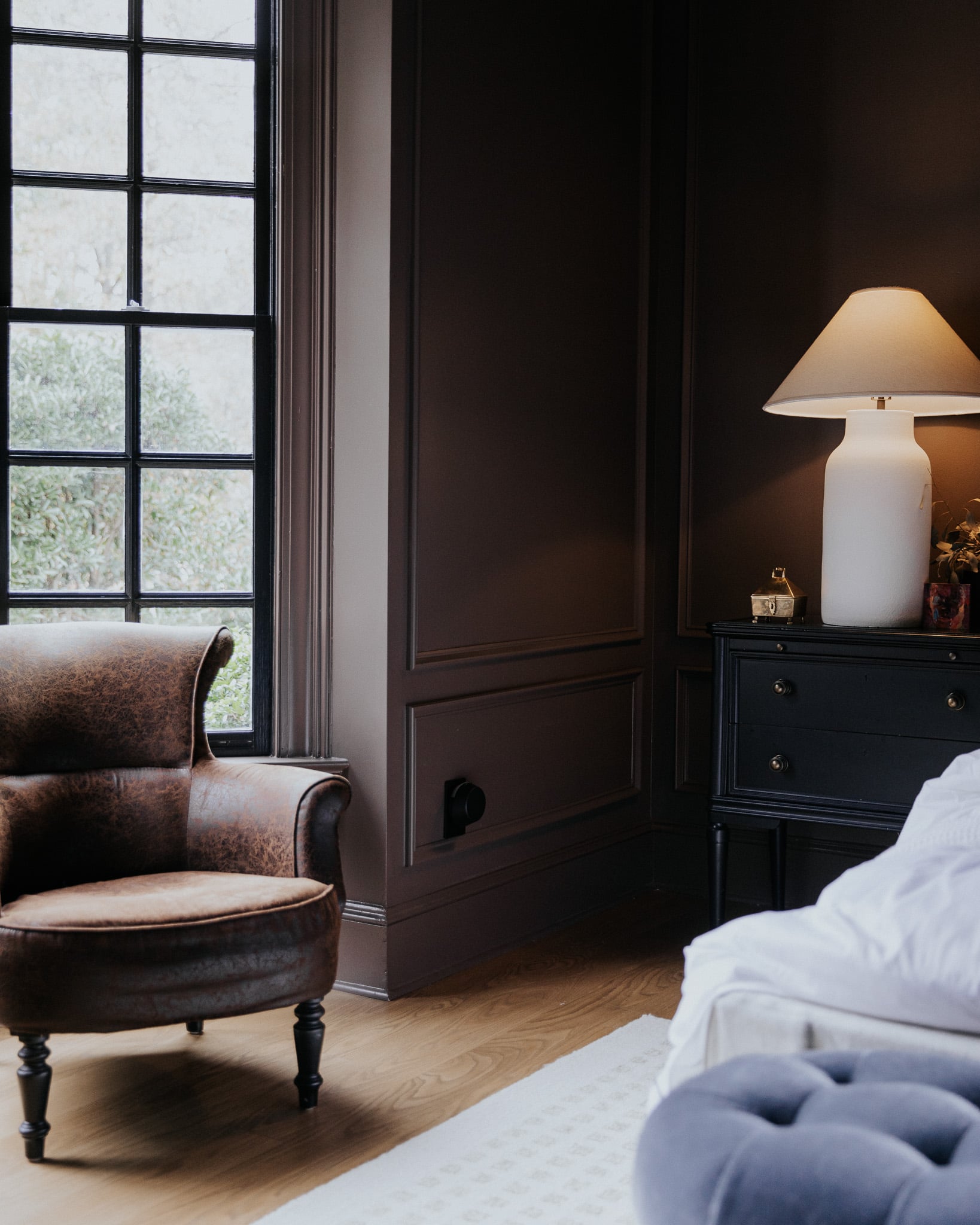 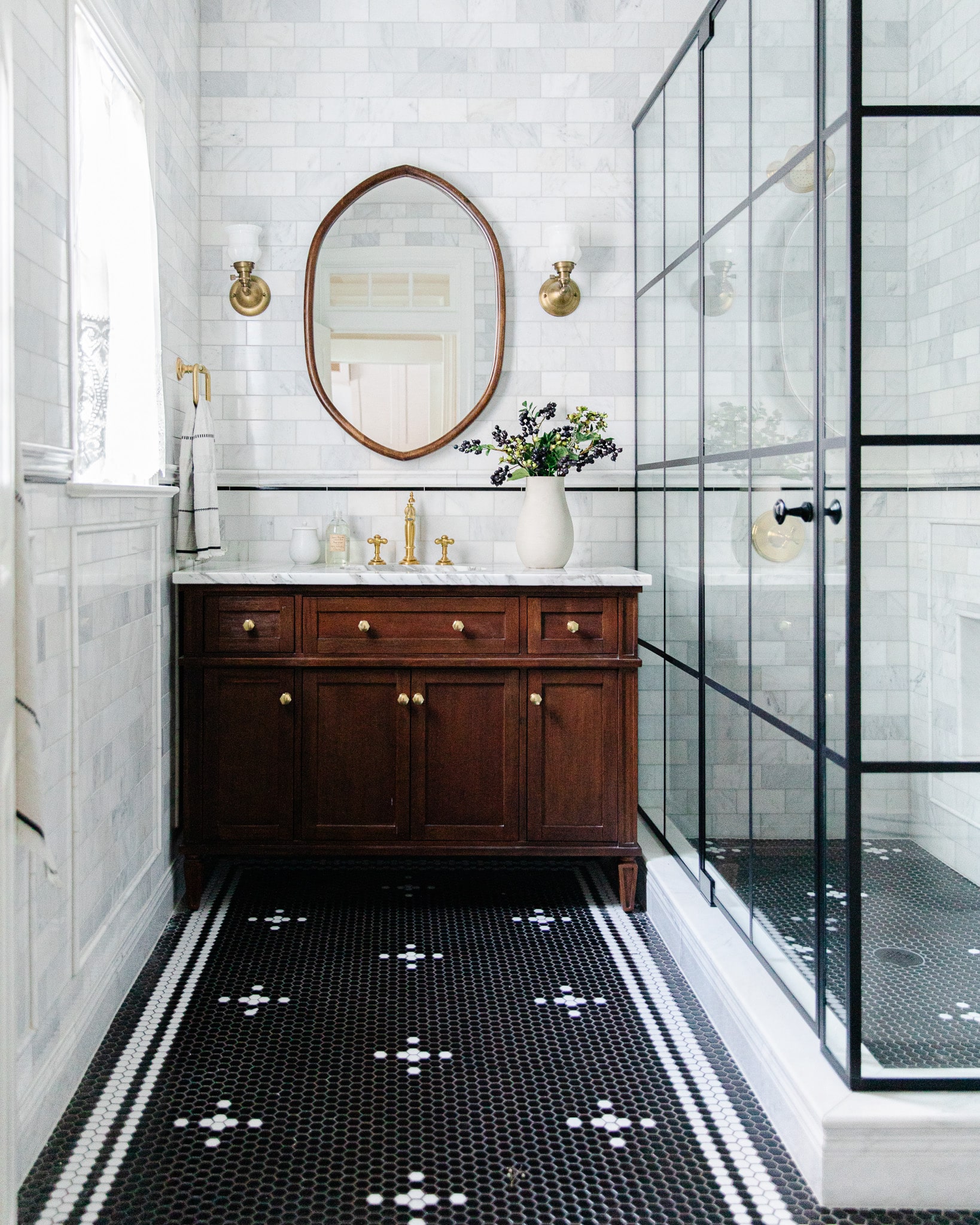 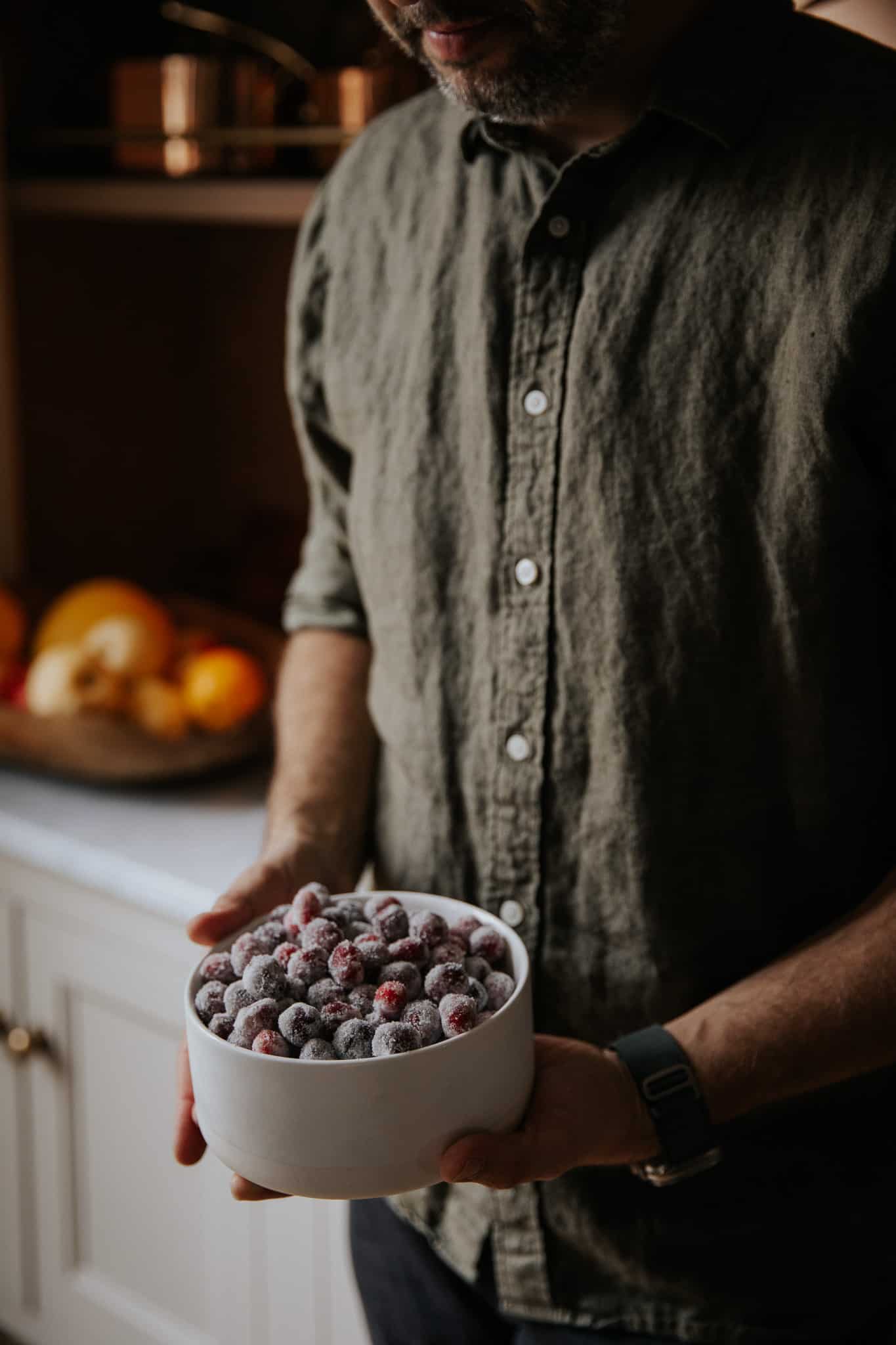