I ended yesterday’s new-chandelier post proclaiming, “bring on the well-lit dinner parties!”  and we wasted no time doing that.  Last night, we had a couple good friends over for a shrimp boil–a low-key and out-of-this-world flavorful dinner that requires one pot and zero plates.  Which I la-hove, because since Chris is the chef around here 98% of the time, I do the dishes just as much, and last night dishes were almost non-existant. And the only thing more amusing than a lack of dishes after a good dinner is presenting your guests with no utensils and no plates.  Woohoohoo. You gotta try it. 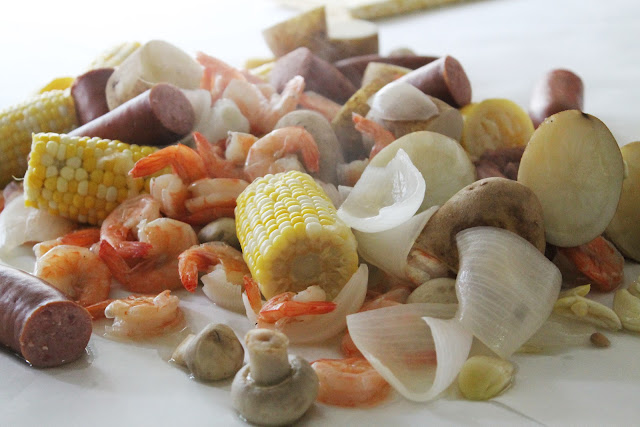 That’s right, you just dump the whole meal right on the table.  Of course, you are gonna want to protect your table (and your food) first.  So, I laid a layer of plastic (in this case I just used a few overlapping white trash bags) and a layer of butcher paper on top. 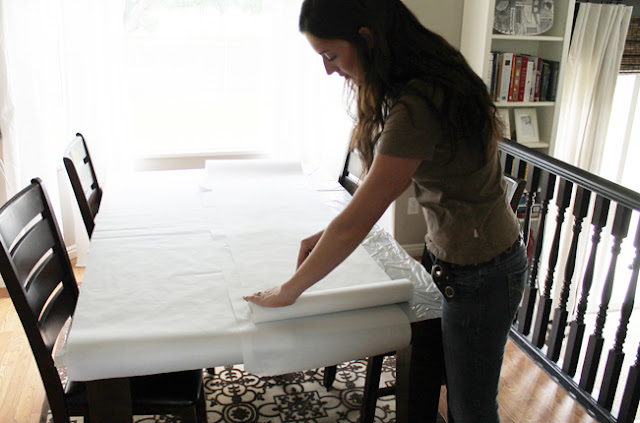 Then, it is all hands and elbows on deck to dig in.  We just squirt our sauces right on the covered table and eat and chat and watch our pile of food slowly downsize.  It is a f-u-n way to enjoy a meal. 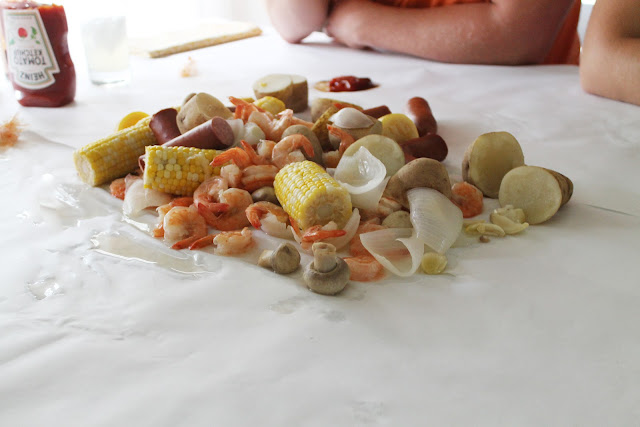 My expertise kind of stops with eating and protecting furniture, but luckily Chris (who spent 2 years in Louisiana where shrimp and crab boils are abundant) agreed to share the recipe for your next dinner party. Here’s his 411 on the shrimp boil:

The most important part of a proper shrimp boil is the water. You need to make sure there’s lots of flavor in the water, and it doesn’t really matter what you use to flavor it, as long as you like the ingredients. I’m a bit of a traditionalist when it comes to a shrimp boil, so I stick with the cajun flavors.

Pot of water – about 1.5-2 gallons
1/4 cup salt
black pepper (7 or 8 grinds)
1/2 T garlic powder
2 tsp smoked tobasco
crab boil (I use the liquid – add as directed on the bottle or adjust to make it more or less spicy. I used about 2 tablespoons)
5 cloves of smashed garlic cloves (5 large ones – remember, this is 5 large CLOVES, not 5 large HEADS of garlic)
2 lemons, cut in half, juice squeezed into the liquid and lemon pieces dropped in
1 onion – ends trimmed, peeled, cut into quarters one end to the other

Put everything in the water and bring it to a boil. Let it boil for a bit. In the south they do this outside because the fumes can get pretty hefty. I don’t have the proper equipment for that, so I just make sure to open the window and have any fans going, as well.

Rest of the stuff:

5 or 6 potatoes–cut into large pieces
2 links of smoked sausage–cut into 5 or 6 pieces each
5 ears of corn–cut into 3 inch lengths
8 oz whole button mushrooms
2 lbs uncooked shrimp–(tails and shells on) if frozen, thaw

I should have taken photos of everyones’ pile when the meal was done.  Let’s just say, it was obvious the men were eating shrimp like crazy and the women were talking a lot. Ha! Anyone else having low-key summer dinner parties?  Are we the only adults that get real excited about eating with our hands?
Previous post: