TOP
It may seem like we are always entering contests, it isn’t far from true.  Chris and I are pretty competitive, but more than that, we look at it as a fun way to earn some extra dough to fund even more projects around here.  However, in the case of Chris’s recent cooking competition–it was purely for fun and food (even the prizes were restaurant gift cards!)  The thing about competitions is that we don’t always win.  In fact, despite what most of our friends and family think, we lose a lot.
Last year, with tons of help from our friends, we scored a $1500 gift card to RC Willey.  That was awesome and unbelievable and A LOT of work.  We actually contacted (mostly through facebook) all of our friends and even some people we haven’t talked to in 10 years and asked them to vote for our entry.  Yeah, we were those people.  At first it was embarrassing, but after a while it was so fun to catch up with some people that I hadn’t heard from in a while.  Conversations sparked and reconnections happened and in the end, we won–on all accounts.
Earlier this year, we entered another contest where the prize was $5000.  You entered a photo of a room in your home into a contest and then rallied people to give it a thumbs up.  Unfortunately, there were also people giving your room a thumbs down.  In the end, the room with the highest percentage of thumbs up, wins.  There was a lot of cheating (clearing of caches and cookies–which we decided we weren’t going to do) when it came to voting and the contest wasn’t fun.  And not just because we didn’t win.  The person who did win, didn’t have the best entry–not nearly–and it was obvious the contest was skewed.  We decided we weren’t going to enter anymore competitions that involved the crowd’s vote.  We didn’t want to put our friends through that anymore.
Recently, I came across two contests (I really do just happen upon them as I am blogging) and both fit the kind of contests that I like to enter: low entry, short entry time and large prize.  The first was the True Value DIY contest which we won!  It involved sending in photos or a video entry of a space in your room that you have been wanting to renovate and what you wanted to do in the room.  Our basement was the perfect candidate.  I had Chris film me one night and I submitted the video.  We were thrilled when we got the news that we scored the $2500 to redo that room.
Before we heard that we won that contest, we entered our basement into another contest–for Olympic ONE paint.  There were less than 100 entries and the prize was $10K.  You had to incorporate the can in a humorous way and show how it covers in one coat.  Chris’s brother, Brandon, came over and took the picture for us and we thought we had it in the bag. 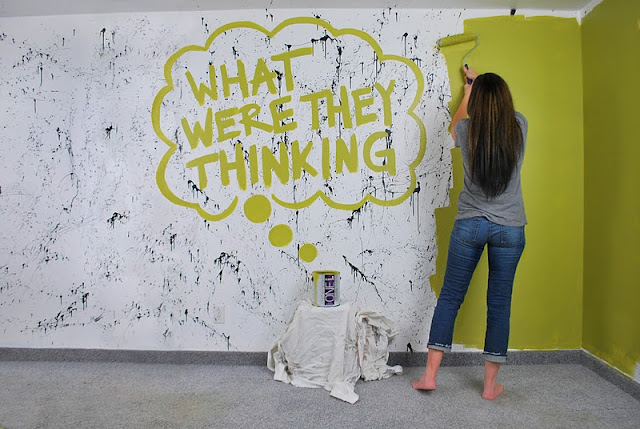 Wrong.  They just announced the winner and it’s this gal: 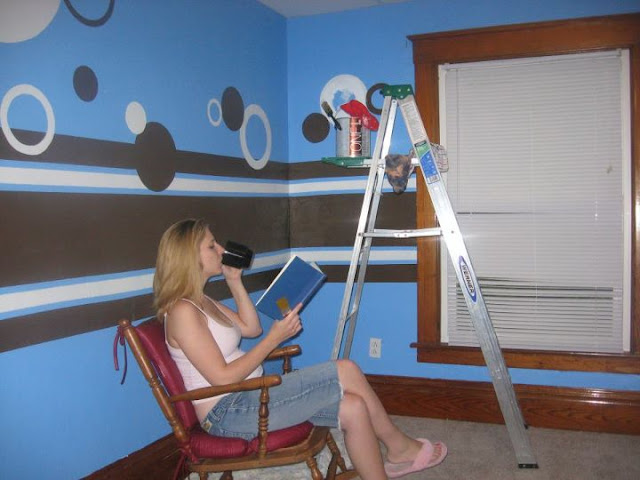 Get it?  The can is doing the painting.  Good for her!  Although we totally wanted that $10,000, we still feel like we won big with the True Value contest.  Those walls need more than just paint.  In fact, that paint is all being sanded off (we just rolled on enough of a bright color for the picture).  There have been lots of other small contests we have entered, and lesson learned: you win some, you lose a lot–but it is mostly a good time, and when you win, it’s a great time.

Funny–we just discovered it was exactly a year to the day from when we found out we won the $1500 RC Willey gift card to when we won the $2500 True Value contest.  Next year, we better shoot for $3500!