What are YOU Being For Halloween?!

We are halfway done getting the trim and baseboards installed in our laundry room and can’t wait to show you the difference it has made. Yowza!  But today, in the spirit of the season (and because Chris and I have finally nailed down our costumes for this year) we are dying to talk costumes.  Halloween is no exception when it comes to DIYing.  We love to make our costumes or piece them together a la thrift hopping, but coming up with an idea that we are both excited about usually takes the longest.  All year (no joke) I ask Chris, “What should we be for Halloween?!” It’s my favorite thing to talk about. 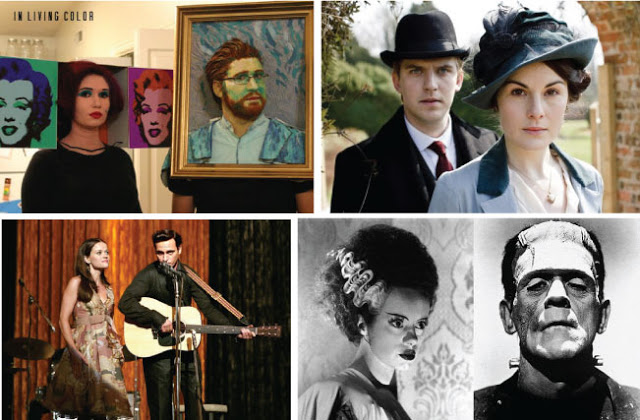 These are just four of the costumes that were on our short-list this year.  Fine art?!  Love that!  Although I was set on being the Mona Lisa and I am still determined to pull that one off in the future.  Downton Abbey was a clear choice, but Matthew and Mary’s (especially Mary’s) wardrobe is hard to come by on a dime or even piece together.  Also, Chris wasn’t convinced people would know who we were. The same was true in the case of June Carter and Johnny Cash–we probably couldn’t have pulled it off as good as Reese and Joaquin, especially once I started singing.  Because singing would kind of have to go hand in hand with that costume.  Frankenstein and his bride were the first costumes we were set on this year, but somehow–the one we ended up on–trumped it all.

Your turn.  Have you decided?  What were you last year?  I noticed I tend to choose costumes that would work easily with my hair color.  Which means, I’ll probably never be a traditional Alice in Wonderland, but Hansel and Gretel are fair game.

Family Tree Gallery. Minus the Tree. »

« Taking Grout from Dark and Dingy to White and Bright