Trimmed Out and Butterflied.

We ended yesterday’s post saying we decided to trim out the grasscloth wall.  Luckily we were able to get most of it trimmed out on Saturday after we finished wallpapering, but I had to finish spackling holes and caulking before giving you the full reveal.  Here she is: 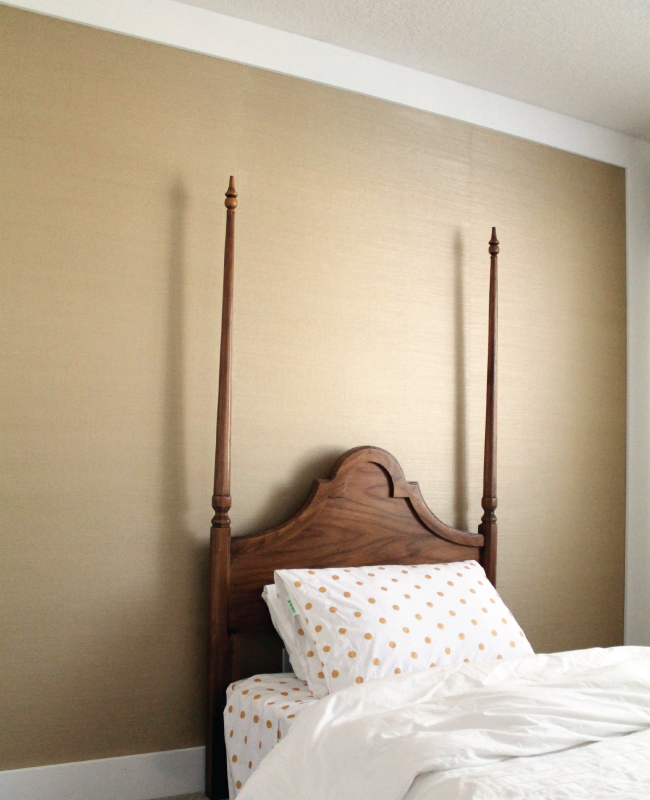 We used the same simple trim we used throughout the house for baseboards–5 1/2 inchers for the top and bottom and slightly thicker for the sides to cover up the gap between the grasscloth and wall (my bad). But we’re gonna call it a happy accident because the result is crisp! 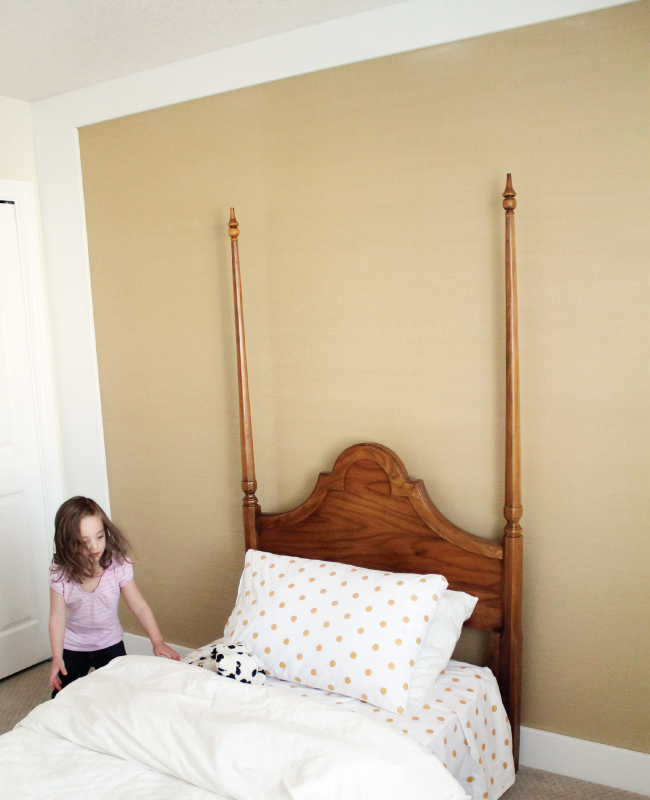 While we were framing out the grasscloth, we decided to update the baseboards, too.  Eventually the whole house will have these 5 1/2 baseboards, but we are taking it one room at a time (we’ve already done the guest room, family room, laundry room and now Greta’s room) so we don’t get too overwhelmed by the idea of replacing all. of. the. baseboards.  So far, it is working well. 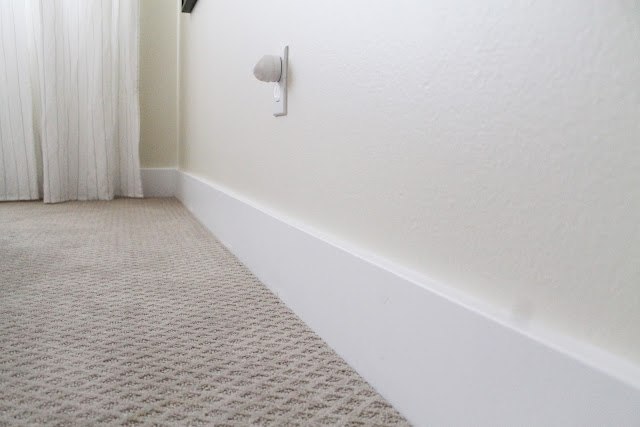 Oh, and you can see we decided to stick with the taupe/light, light, light yellow paint.  It goes so well with the grasscloth and, I mean, we have plenty of gray in the house already.  But back to that framed out grasscloth.

Originally we thought that the grasscloth + tall pillars from the headboard would be enough interest for that wall, and then I came across these little black 3D paper butterflies from Hip and Clavicle in early December and screamed!  Since Greta’s room is inspired by Serena’s from Gossip Girl, we had to include the black butterflies. Before I stuck them up on the grasscloth (they come with sticky backs), I laid a general design out on the carpet and started playing with them. 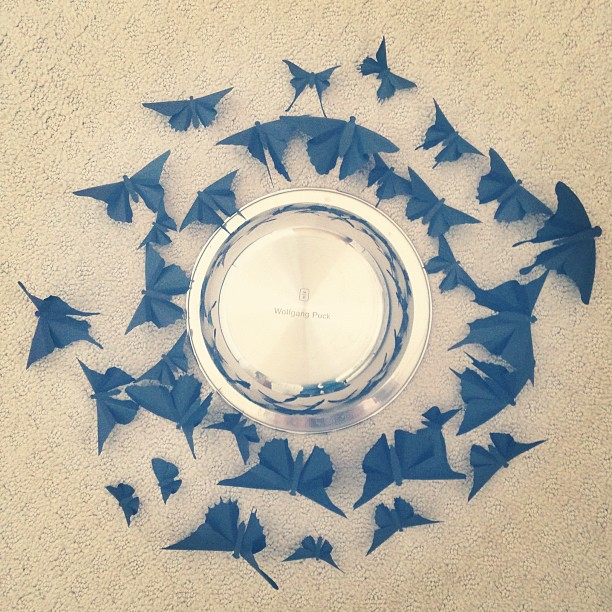 I discovered using a bowl in the center helped me keep a circular shape and then I let them “fly” out more freely after that. Once I started getting them up on the wall, I still moved them around more until it felt organic and just right.  That meant loosening up the center circle and just leaving the idea of a circle. 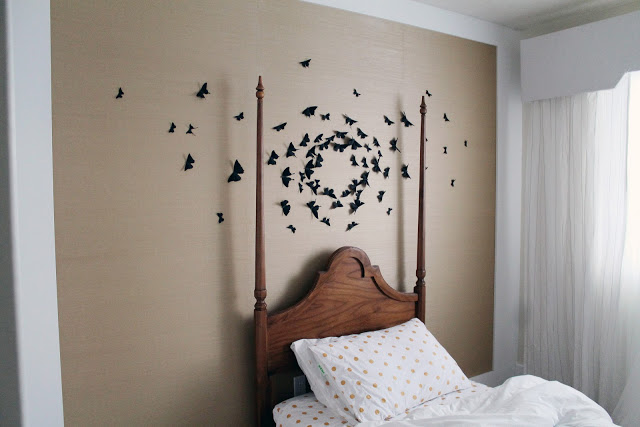 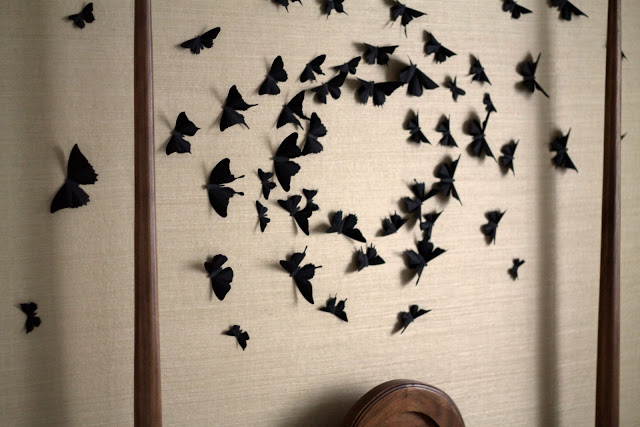 The butterflies. Mmm. They’re so pretty and come in a variety of different sizes. They are folded into facets that catch the light and are a mix between swallow and round butterflies.  Greta was so thrilled with them, I wish I caught it on camera.  It was something like a really high squeal followed by “Oooo!! Butterflies!!” 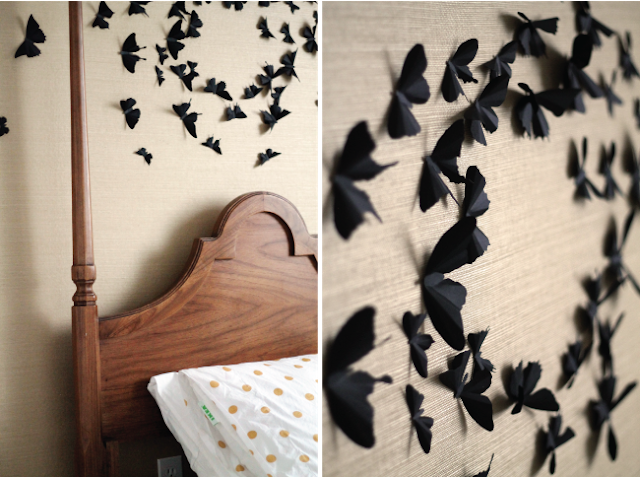 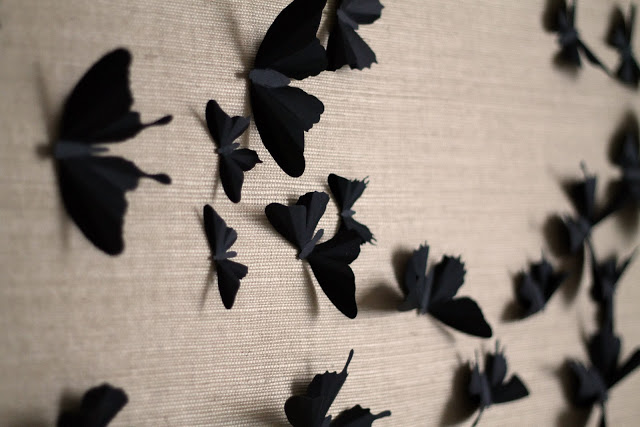 I only wish I had sixty more.  Jacqueline makes these in 129 colors. 129!! Check them out here.  We went with classic black to coordinate with the frames on the opposite wall–but that’s a post for a different day.  Very soon.  ;)