This morning when Greta woke up, her left eye looked a little droopy.  I immediately called her doctor and they wanted to see her right away.  She was still being her smiley self, but by the time we got to the doctor, her smile was pretty lop-sided.  My heart was breaking.  The first doctor she saw was very intrigued and puzzled.  I told her about my experience with Bell’s palsy.  She left and said she needed to look some things up. She came back with a second doctor and both looked at Greta for a long time.  They said that really, the best case scenario is Bell’s Palsy.  Although it is rare for a 7 month old to get Bell’s Palsy, it happens–and fortunately it shouldn’t last long.  I pretty much broke into tears because that was such a hard thing to go through and I didn’t want my baby going through that. Even today, the right side of my face is constantly in pain.  However, it would be better than something worse.  Some things they mentioned were brain damage and botulism…I really should have had someone with me because by this point I was in tears and could barely focus on what they were saying.  I do know that  we have to watch closely the next two days and make sure it doesn’t get any worse or spread, signifying something more serious than Bell’s Palsy.  Please pray for our little girl. 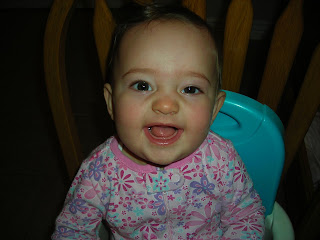 This was taken when she first woke up. 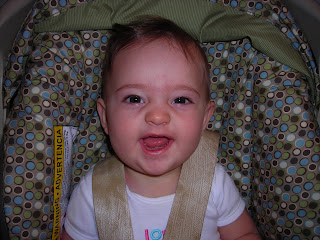 Taken an hour later, on the way to the Doctor