TOP
We love our open shelving in the kitchen.  It is so convenient to have our everyday dishes handy.  That being said, it has been a slippery slope keeping it organized and looking good.  When we put the shelving up back in August (photo on left), we put everything we thought we needed and wanted on the shelves.  I eventually painted the pots for the plants and that was fun for the summer (photo on right). 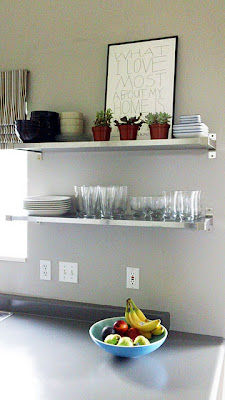 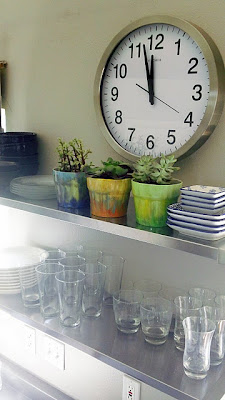 Fast forward a couple months…to yesterday and this is what our shelving looked like: 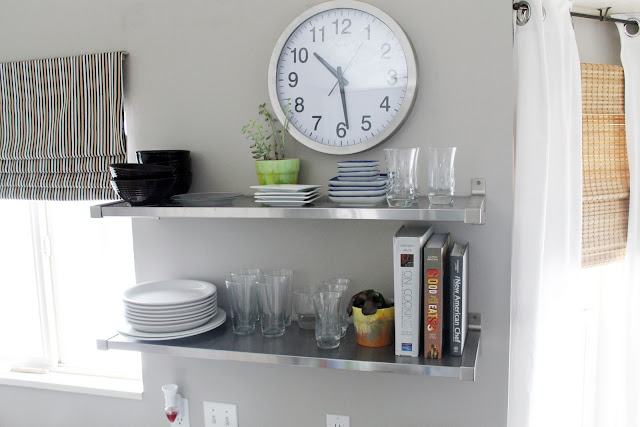 Yikes!  The blue potted succulent died a month after I got it and as you can see from the photo above, the other two were on their way out.  Why!?  Grrrr.  I needed a change anyway.  I packed up the pots for use later and cleared off both shelves and started fresh. 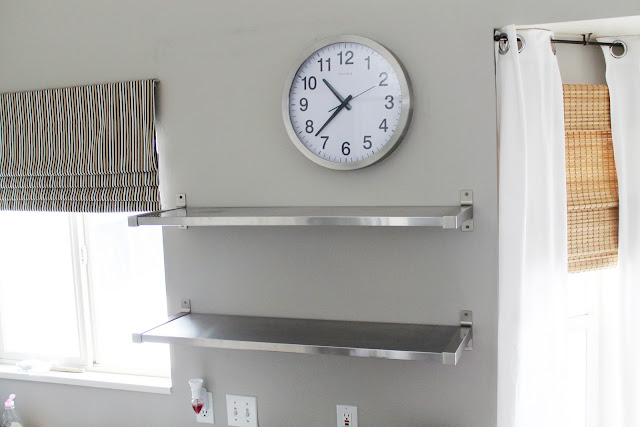 With the plant pots packed up,  I decided to do some other rejuvenating paring down.  We don’t need multiple sizes of glasses out.  We’re adults–and Greta uses her sippy cup for the most part, so having a dozen juice glasses taking up space didn’t make sense anymore.  Also, having two sets of bowls that don’t match is dumb.  For the record–I don’t like either set much–and I would love new bowls someday soon, but having both out now isn’t helping me like them more.

A few of Chris’s cookbooks found their way to the shelf.  He reads his cookbooks cover to cover like novels and I found myself putting them away everyday.  But why?  If he reads them everyday, they deserve a spot.  After paring down what we don’t need and adding what we do, this is where we ended up: 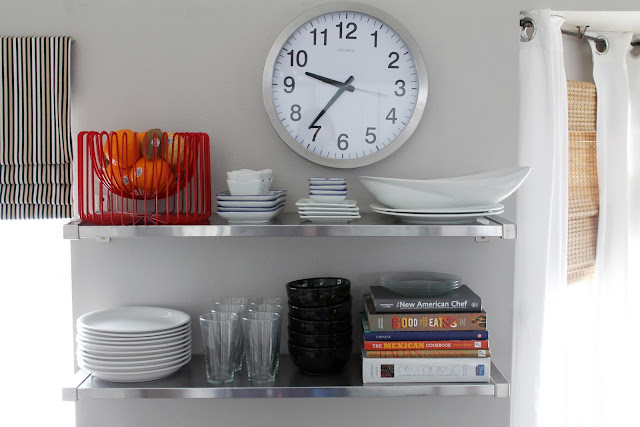 *Sigh* That feels better.  On the left of the bottom shelf, most accessible, is where I stored what we use multiple times a day.  Plates, a modest number of glasses and bowls.  A few more of Chris’s books stacked next to the bowls so they won’t topple onto our dishware add a pop of color.  The smaller clear plates we use occasionally, so keeping them out and extra handy was important to me. 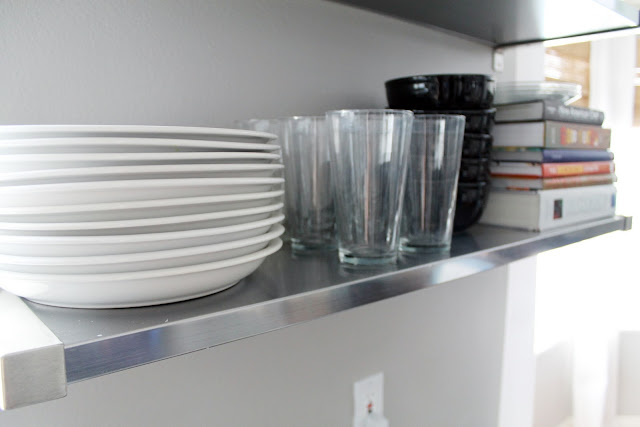 On the top shelf we have our fruit bowl (gotta love maximizing counter space) which is still very accessible and adds color, as well as smaller appetizer plates, sushi sets and serving dishes that we use often.  Whether we are having company over, or it is just a daily dinner for the two of us, Chris really likes his meals to LOOK as good as they taste. 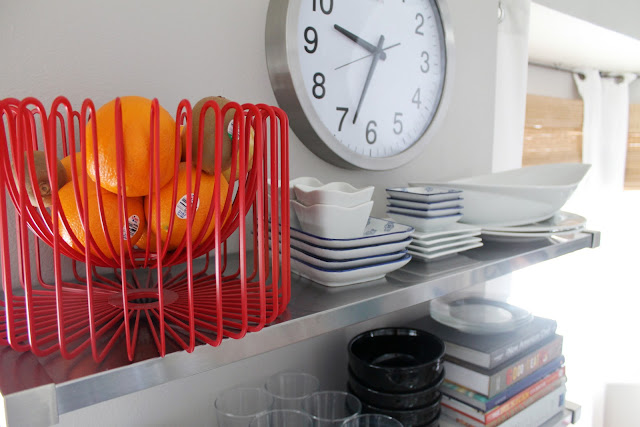 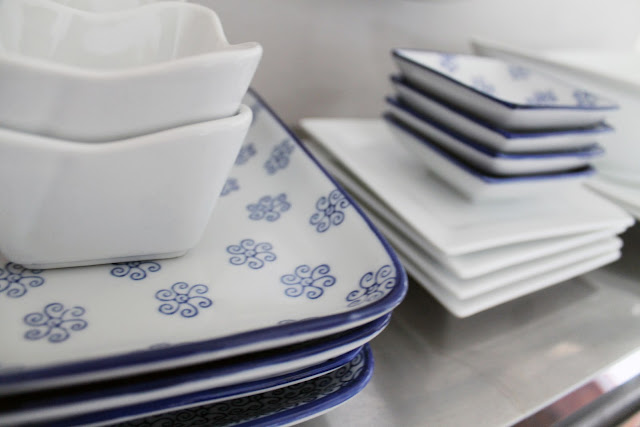 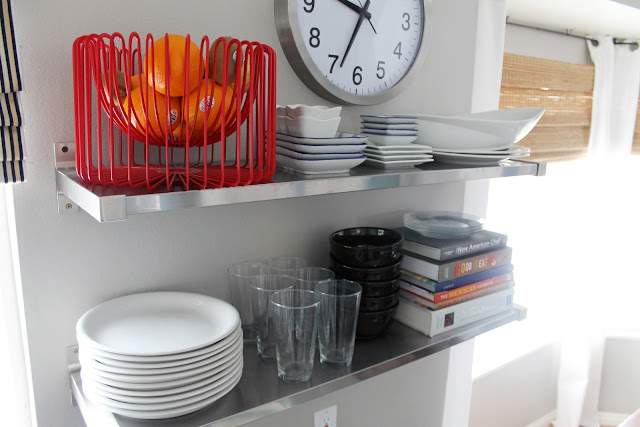 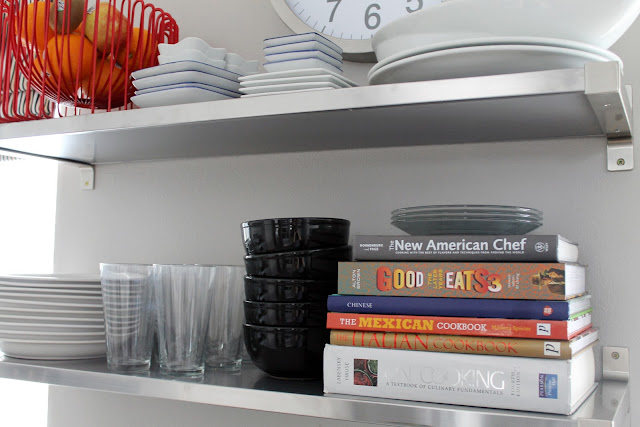 I think it is a good idea for open shelving to evolve.  Hopefully those black bowls will evolve right outta here soon (I got them at Walmart when I was a freshman in college). But in the meantime, I am so happy that our shelving doesn’t look like this anymore:
Sparse and dead:

« Reason #76 to ALWAYS pick up the Mistinted Test Pots