It’s hard when you work really hard on something and it just doesn’t look right.  Or feel right.  Or you flat out, don’t like it.  For some people, the hours put into a project alone are enough for them to live with it.  Even when I put hours into something, and even when I blog about it and show the world how great something could be–I later eat my words and swallow my pride and start over. I do like to give myself 24 hours living with a paint color, or piece of art, or stencil, or gallery, or curtains, or area rug before I nix it because it may not be the new decor that you don’t like–it could just be the shock of change that takes time to get used to.

One easy example of this is that zebra rug in our family room.  I recently rolled it up and stored it in the basement.  Then I put it in the online classifieds.  I just don’t like it anymore.  It was great in our apartment. There was a time I loved it, but it doesn’t fit into our home’s vibe anymore and just because we spent money on it at one time (technically, we just spent a gift card on it), it is okay to not like it anymore and sell it and move on.  Lesson learned:  Don’t keep something just because you once spent money on it. 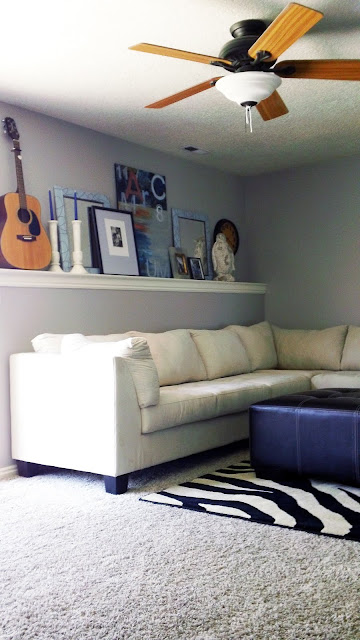 Another example that I am currently working through is our staircase gallery wall.  Yesterday, I announced that I was stenciling our upstairs hallway.  I got about 1/3 of it done and stopped to step back and look at it.  Something just didn’t feel right.  I wasn’t sure if it was the stencil, the stencil in the hall, or the adjacent gallery wall.  I thought about it all day yesterday and last night and this morning and then I took down the whole gallery.  It was definitely too busy.  So now, we are enjoying a nice blank wall covered in screws and nails until we can replace the heinous light fixture and come up with something more simple for this wall.  As for the stencil in the hallway, the verdict is still out.   Lesson learned:  Don’t put everything you have in one space just because you have it and just because the space is blank. 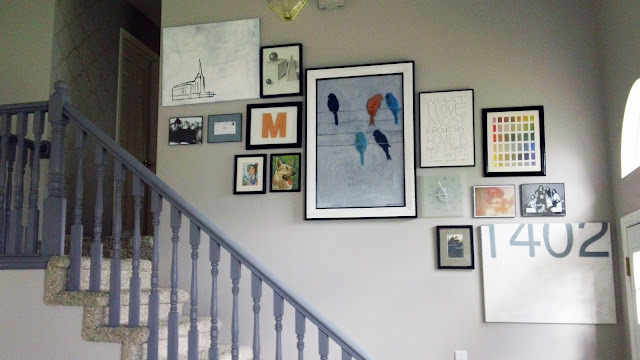 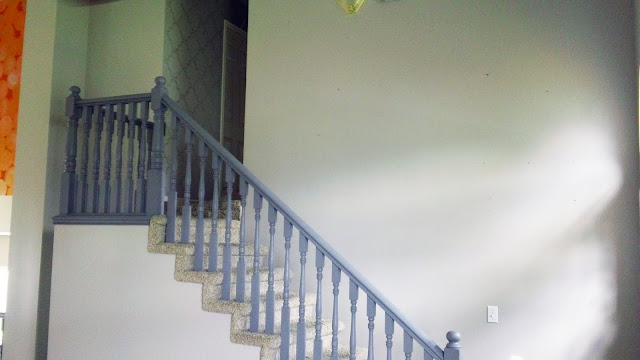 My last example is our dear, Moooi Random Light knockoff.  I am just gonna say it–It has started sagging where we made the hole to change the bulb.  Gah!  We tried to fix it with a sheet of acetate cut in a circle and placed at the top of the light for extra support and it worked for awhile, but it has started sagging again.  However, this is one thing that we aren’t just going to throw out and chalk up to a good try.  We already put several hours into our light and we truly love it–we just don’t love how it sags on one side. So, we are humbling ourselves and trying again.  We are pretty sure the watered down Mod Podge and corn starch are just not strong enough to sustain our massive sphere.  We’re on the lookout for a stronger solution.  We’ve heard good things about Stiffy Fabric Stiffener, or maybe some sort of acrylic epoxy, or even wallpaper glue–we’ll share the details when we figure it out.  For now, our slightly sagging light (thank goodness it is only sagging in the back) is still hanging in the dining room until we muster enough energy to try again. Lesson learned:  Just because you put hours into a project, it doesn’t mean you are going to get it right the first time.  It also doesn’t mean you should give up on it.  Here’s hoping second time is a charm in this case. 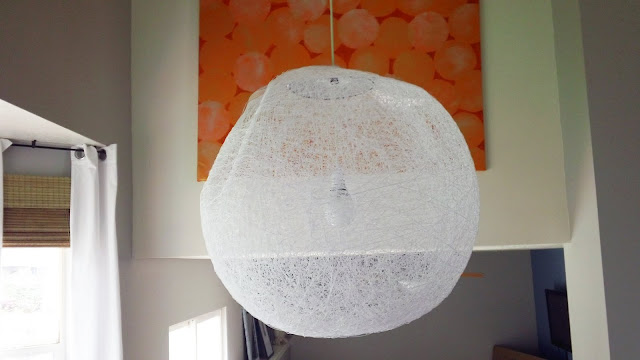 « The Calm before the Awesome.