Dreams come true when you DIY.  One of my very first pins on my Pinterest account was this light fixture.  I fell in love and wanted it for our dining room. 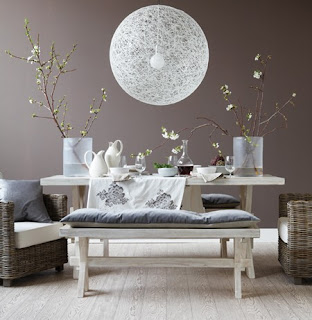 I started tracing back the sources until I found where it was from and how much it was.  The company that makes it is Design Within Reach and it is sold for $2,140.00!!   Yowzas.  I sat on the idea for a week and studied the picture.  Chris and I decided that we could definitely try making it ourselves and save a few thou.  I don’t mean to ruin the ending–but we succeeded.  :)  Here’s how we did it.
Our glue-y substance that held this whole thing together was a mix of Mod Podge, water, and a few tablespoons of corn starch.  Mix it until it is a smooth, thin, milk texture.  We also used 2 spools of crochet thread (2000 yds of it total).  This thin thread was key in making an identical light to Design Within Reach‘s.  Next, you will need some petroleum jelly and lastly, a big ball.  We got this 48 incher at Big 5 Sporting Goods for $4.99.  I’ve seen the same one at Kmart and Target, or you can use whichever size suits you and your space.  Oh, and you are DEFINITELY gonna want a tarp.  The whole thing gets pretty messy, but it’s worth it. 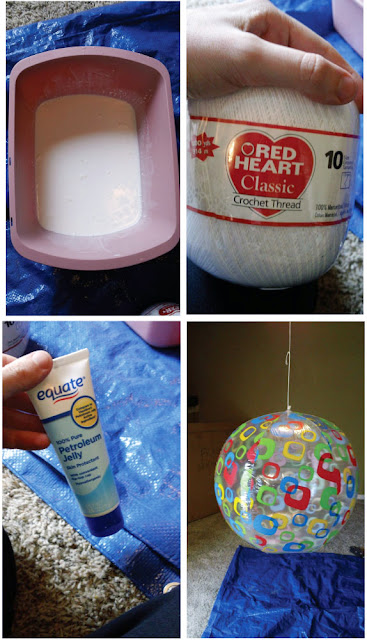 Once you have your ball suspended over a tarp, rub it down with that jelly.  This is imperative to make sure when you are all finished, the ball will still come loose.  Also, trace a circle with a good sized bowl on the ball to allow easy light-bulb-changing access down the road. 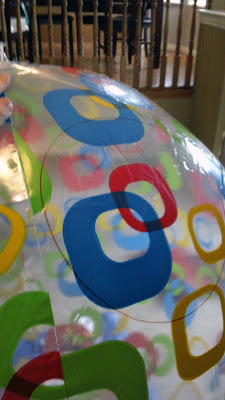 Get wrapping.  This is absolutely a two person job activity and we would switch off while watching episodes of Seinfeld and Dancing with the Stars (there’s a first time for everything I guess).  One person would feed the string into the glue mixture and the other person would wrap the string.  Repeat.  Over and over. 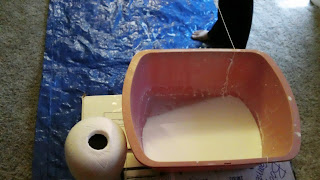 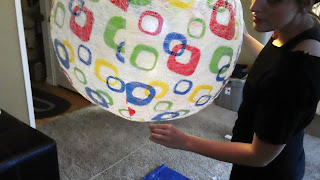 We put about 2 1/2 hours into it the first night and used one spool (1000 yds) of the thread.  We thought it looked good and we were done, but in the morning we weren’t convinced the string was as dense as our “dream fixture.” 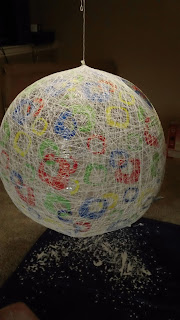 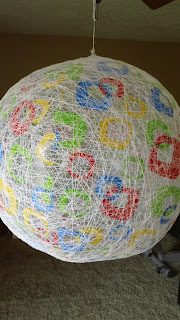 So, the next night, we put another hour into it (we were definitely more efficient now that we had a rhythm down) and finished off nearly ALL of the second spool and we were feeling good about the string coverage. 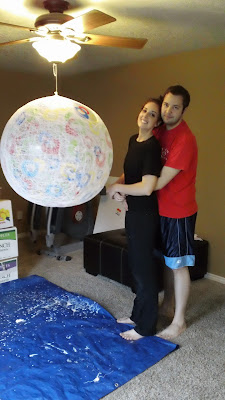 Our plan was to just deflate the ball the next day after things were nice and hard, but it was taking too long, so we just sliced a hole in it after remembering it only cost us $5 and it now had petroleum jelly all over it.  We were THRILLED to see how easily the ball separated from the string.  That was the moment we realized it was woorrrrkkiiinnnggg. 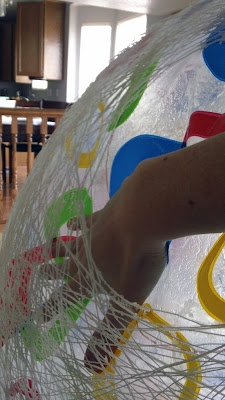 Our next task was hanging our new fixture.  With our vaulted ceilings and an off-centered existing fixture–we knew that there was more work ahead of us.
We purchased the Hemma cord set from IKEA for $3.99 and Chris cut, stripped and separated it to make it a ceiling mount cord, instead of a plug cord.  We also found a big round light bulb that resembled the one in our inspiration picture for $4.99 and snagged that, too.
The two items picture below we found at Home Depot (a rubber stopper and 3-hole cover kit) we used inside the fixture at the very top to keep the bulb in the center of our sphere. 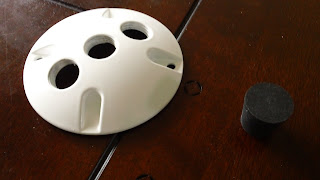 Chris drilled a hole in the rubber stopper and wedged it in the center hole (we plugged the other two holes) and fed the wire through the stopper. 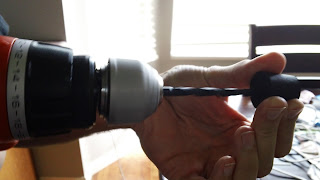 We fixed the slightly off-centered placement of the light by fastening the wire to the center and then covering everything up with a 16″ ceiling mount. 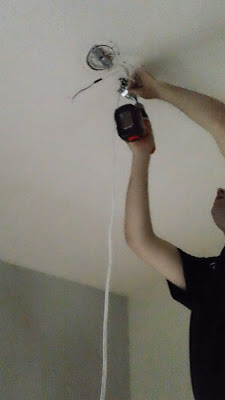 Now, for an overflow of pictures of our new light: 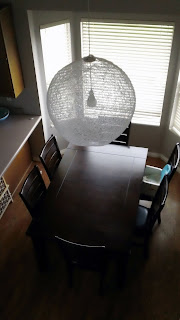 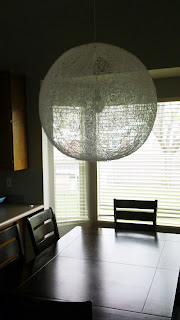 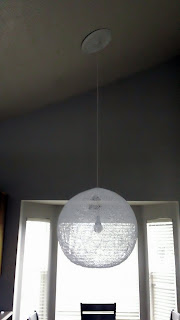 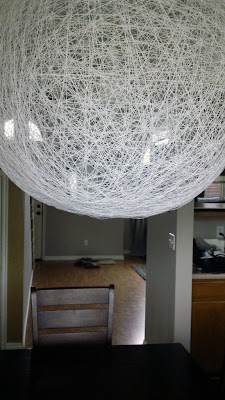 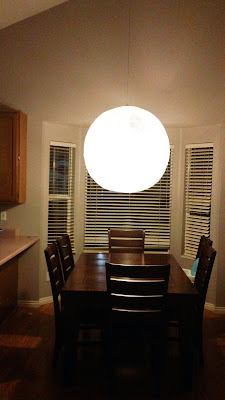 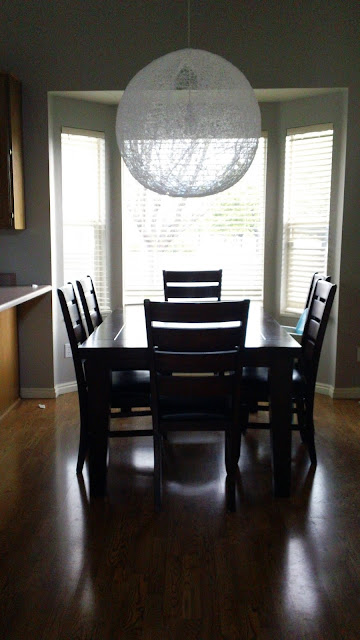 We have plans to switch out our white blinds for bamboo ones for warmth and to give the light a contrasting backdrop.  But for now, we can’t stop looking at it.  It is so rewarding to make something and love it.   We love it even more knowing that we spent less than $30 and saved over $2100 AND got rid of our ugly chandy.  So, yeah.  We’re all smiles over here.

Update:  To reinforce the round shape of the light (it’s a lot of stress for just string), we added some thin acetate we found at Hobby Lobby for $5.  We cut it into a circle and cut a straight line into the center.  Drilled a small hole in the center and fit it in the top of the light.  You can’t see it at all, but it is doing its job, FOR SURE. 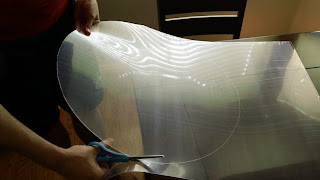 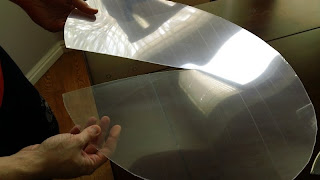 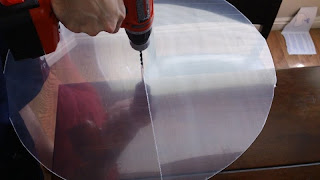