We haven’t had a playroom update in some time, but we’ve made some real progress down there recently. We tore up all the carpet, painted the walls two different colors (I’ll share that soon, but there’s a peek on Instagram!), bought all the material for our built-ins and over the holiday, we revamped the fireplace. I didn’t take a proper before photo with the old mantle on it, but you can kind of see it in this photo. 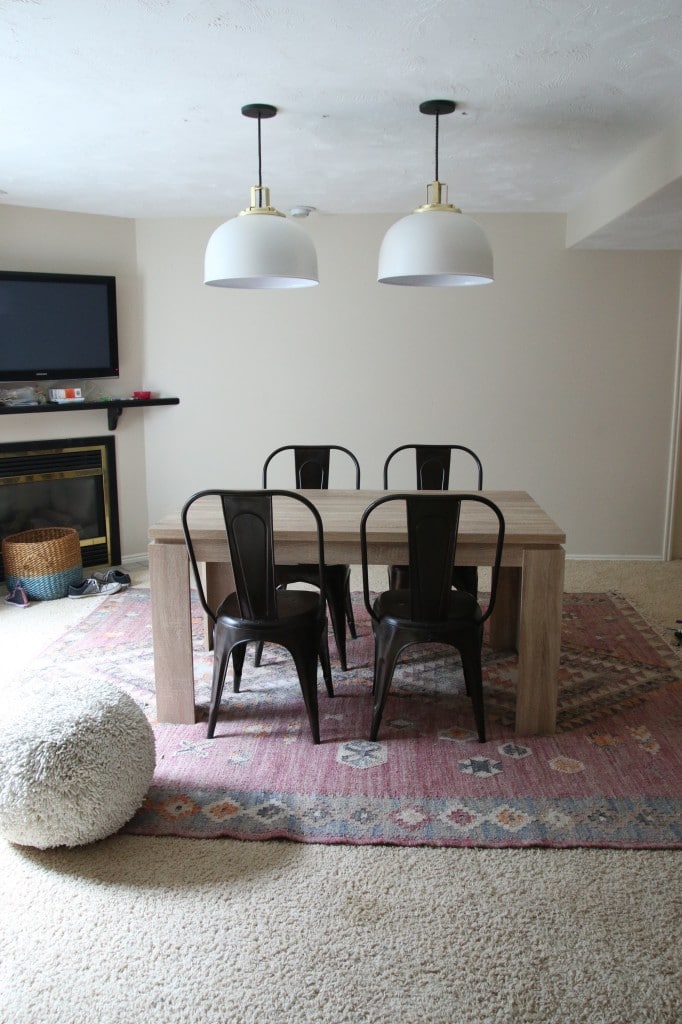 The black trim around the gold part of the fireplace was just wood trim painted black to match the mantle. It was really uninspiring for a long time. I’m not a fan of corner fireplaces really, but this one was inverted and outdated on top of being in a corner. Three strikes? Almost. We thought about nixing it from the room altogether, or replacing the insert but both of those were more expensive and time-consuming than making it work. And, well, I do love a good challenge.

Here’s the before (you can see where the black trim and mantle were removed): 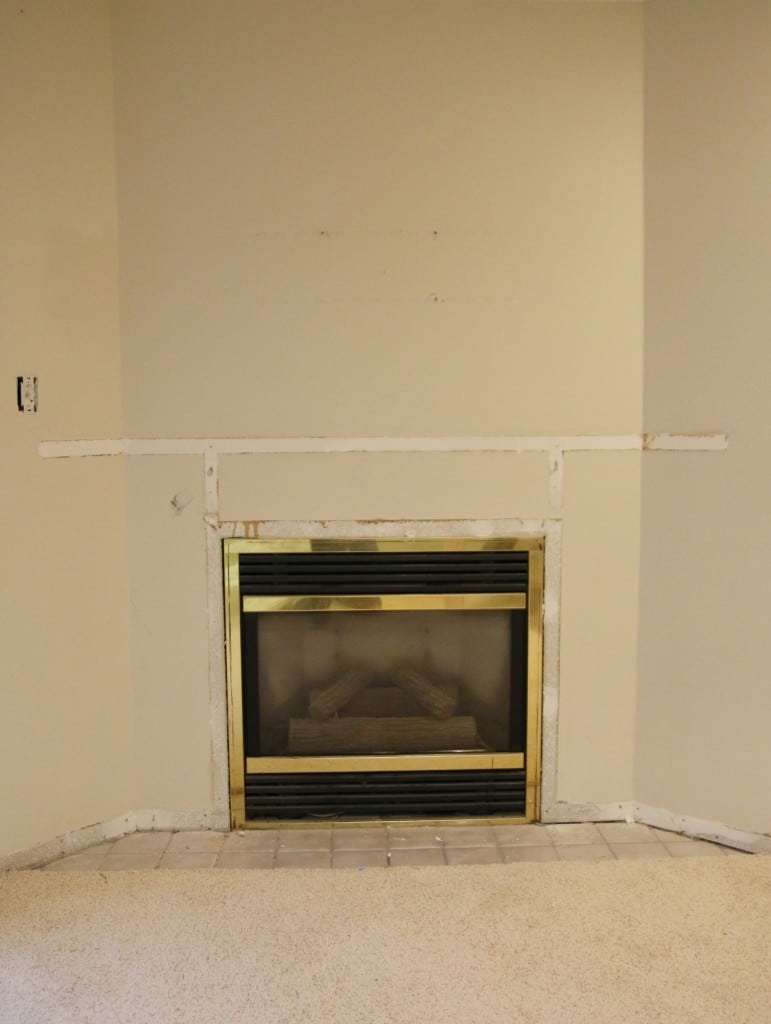 And here’s how it looks now!: 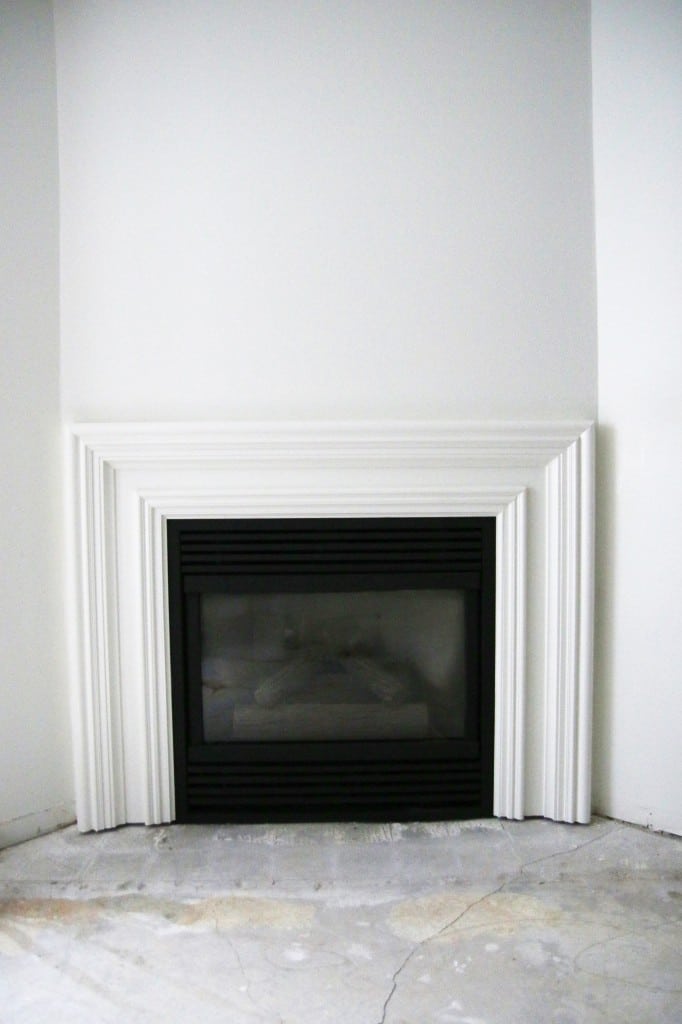 We added a series of stacked moldings that feels traditional and modern–right where we like to be. But what made the biggest difference right away was just spray painting the insert.

I taped off the glass, and gave the surround a good scrub before spraying several light coats of this Rust-Oleum High Heat Spray Paint in matte black we picked up at Lowe’s. 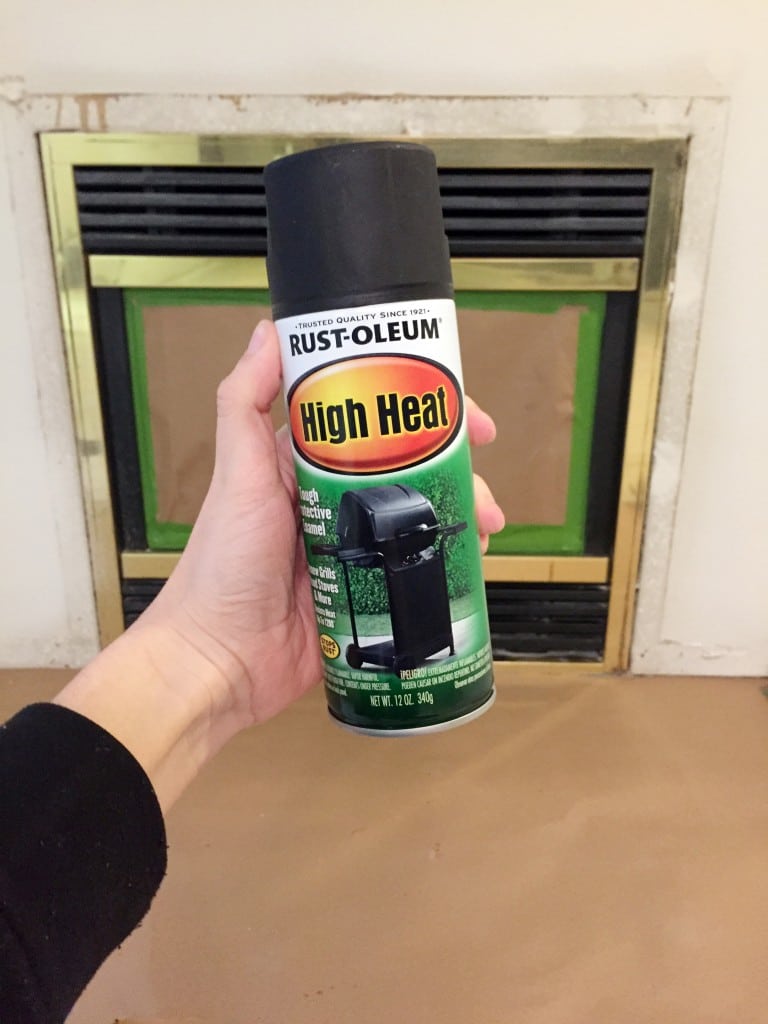 While I focused on making sure the brass was covered especially well, I didn’t neglect the black parts as they were looking tired, too. Everything got a fresh coat of paint and it looked like new when I was done. I opened the window that’s right next to the fireplace all day, which helped with the fumes. 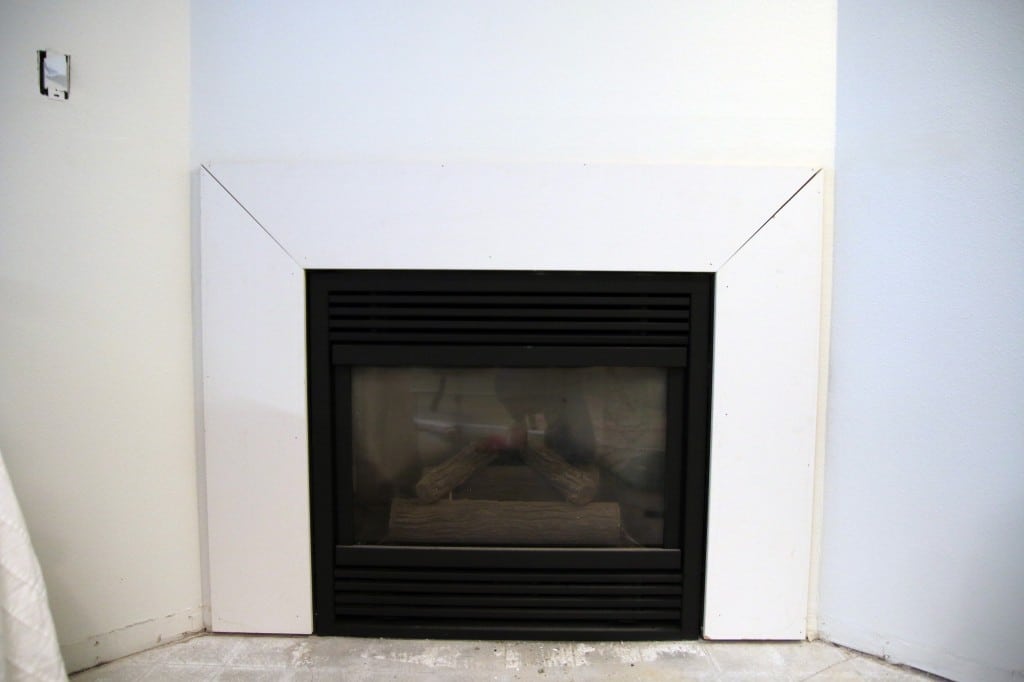 Then we started trimming it out. We started with our largest board first. This is a 1″x11″ primed MDF we picked up from Lowe’s that we cut down to be around 9 3/4″ wide so it left just a little bit of wall around the trim. 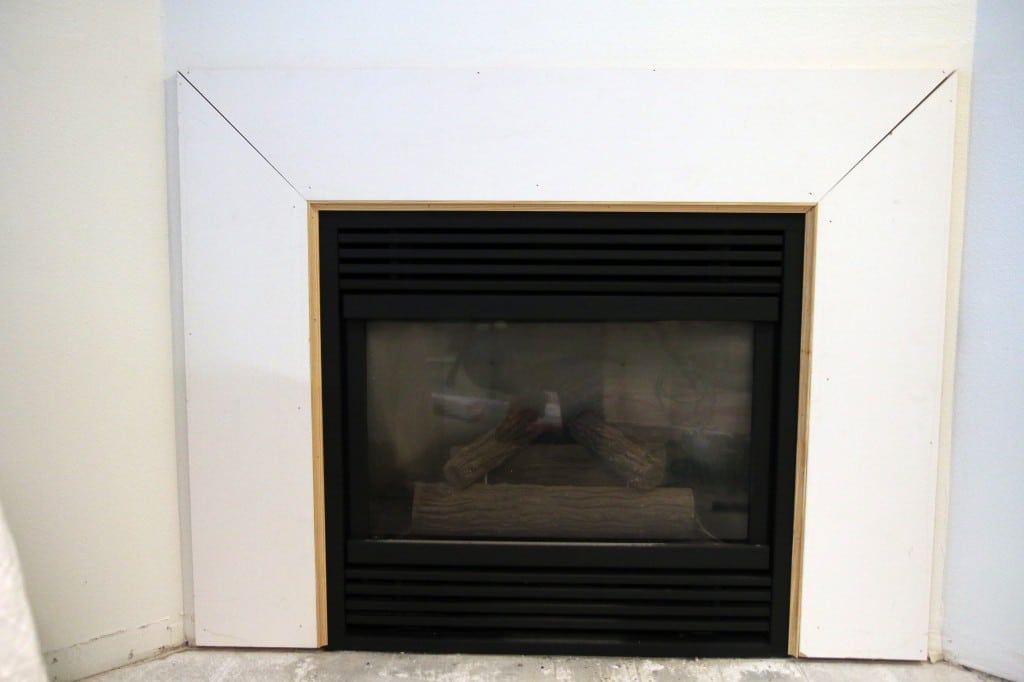 From there, we used a finish nailer to secure this .69″ cove molding in the inside lip. It gave it a nice, gradual inset look. 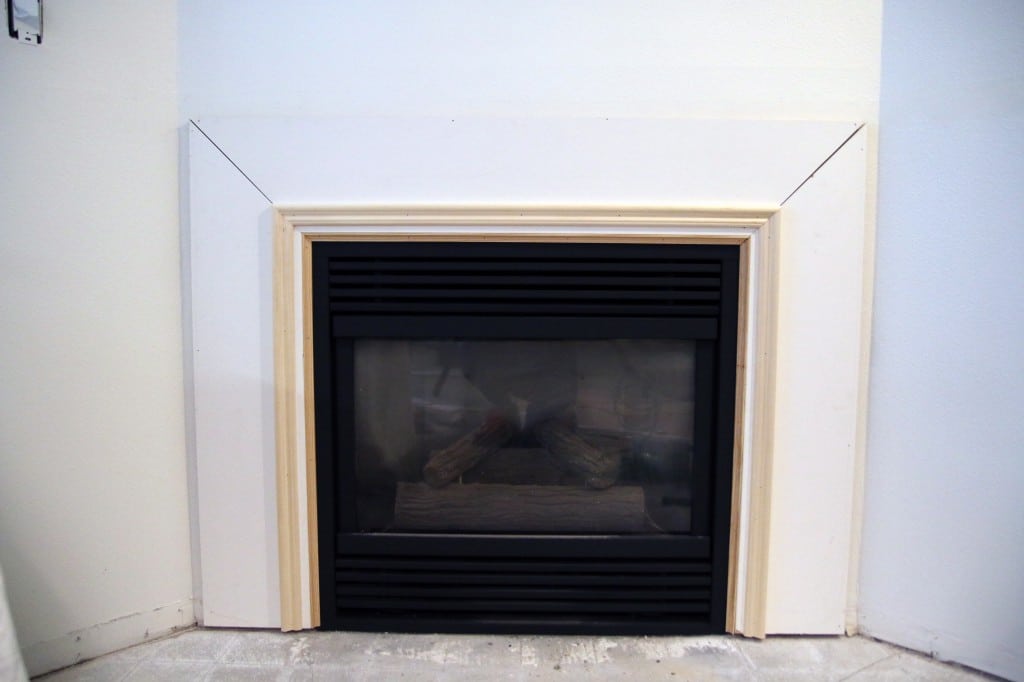 Next came this chair rail. We left 5/8″ space between the edge of the large board and the chair rail for added dimension. Hint: the negative space is just as important as the trim added so map out your spacing before you commit. 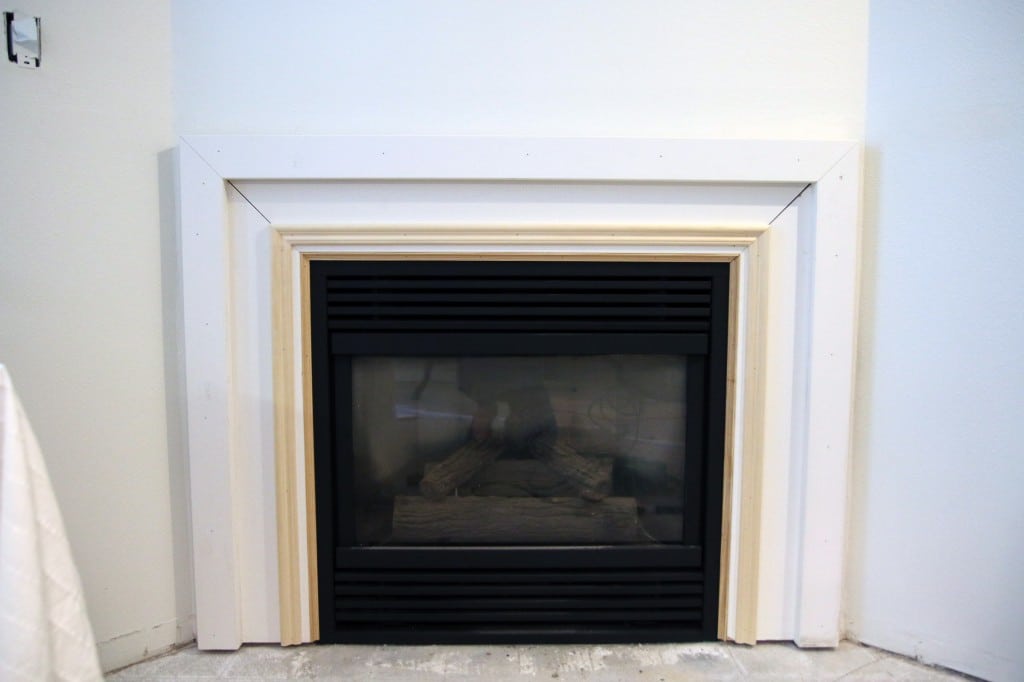 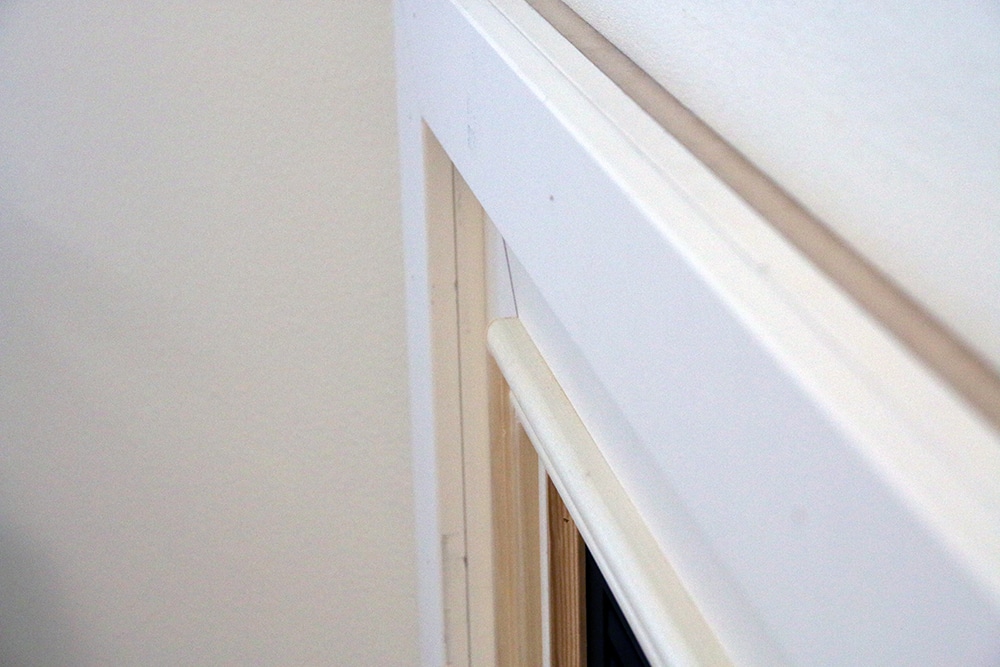 We have no plans of setting anything a top this mantle, it’s not that thick, but the gradual addition of depth does give it some grandeur. 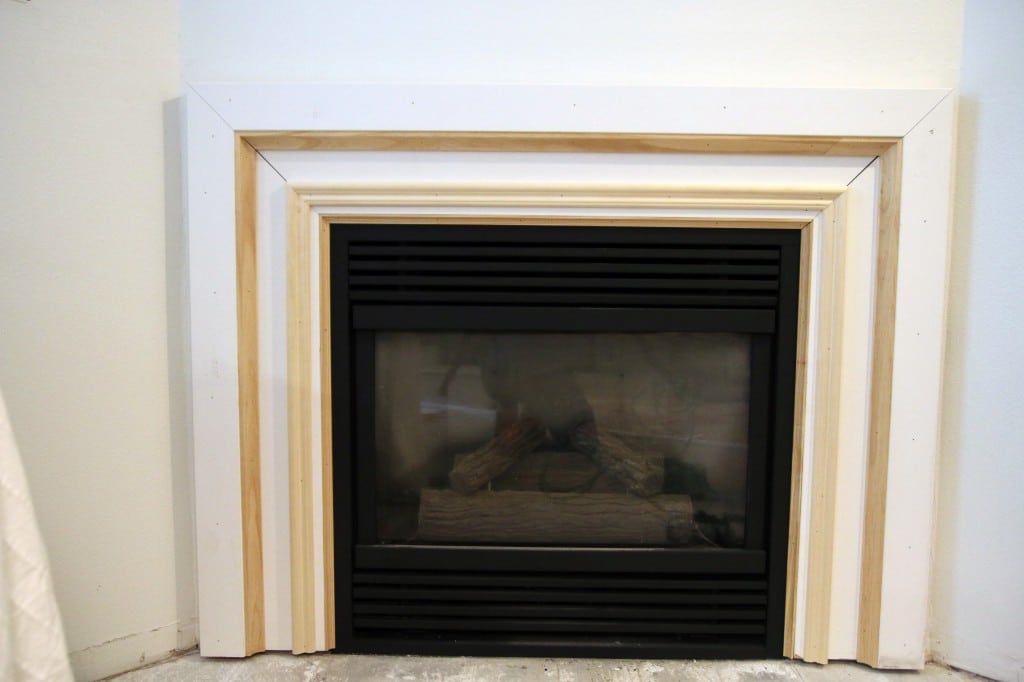 And just like in the first set of trim work, we added another cove molding leading up to it. This time we used this larger 1.75″ Cove Molding. 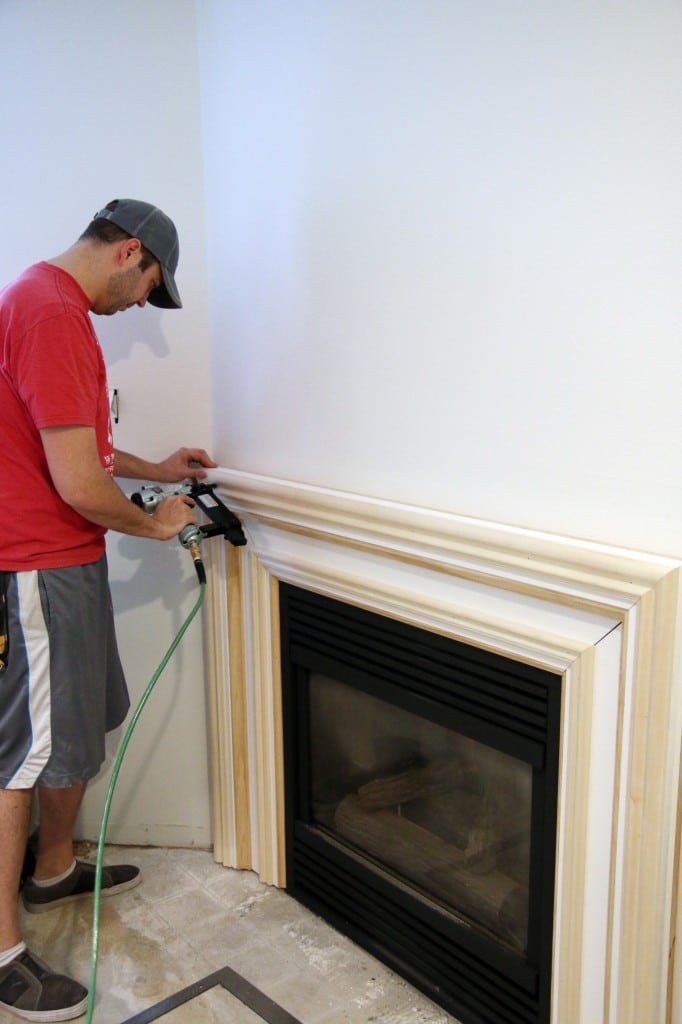 Lastly, we attached this wider, 2.75″ chair rail that lined up with the edge of the stacked boards. 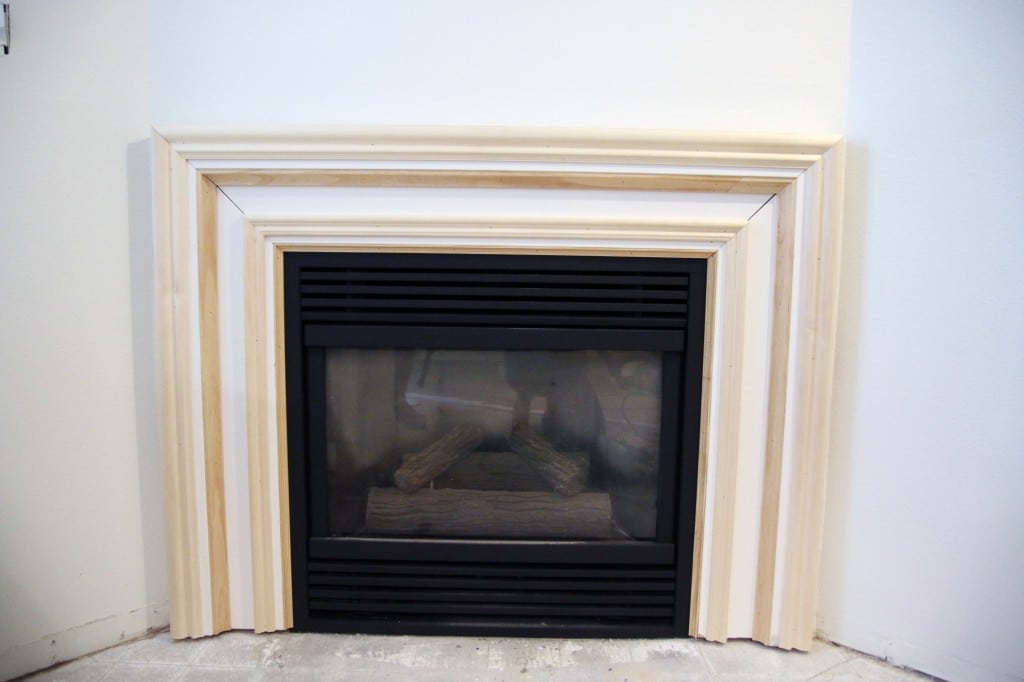 Once all the trim was attached, I spackled, caulked and sanded until it looked like one solid chunk of mantle and gave it a few coats of the same paint we used on the walls (Benjamin Moore’s Simply White) for a modern look. 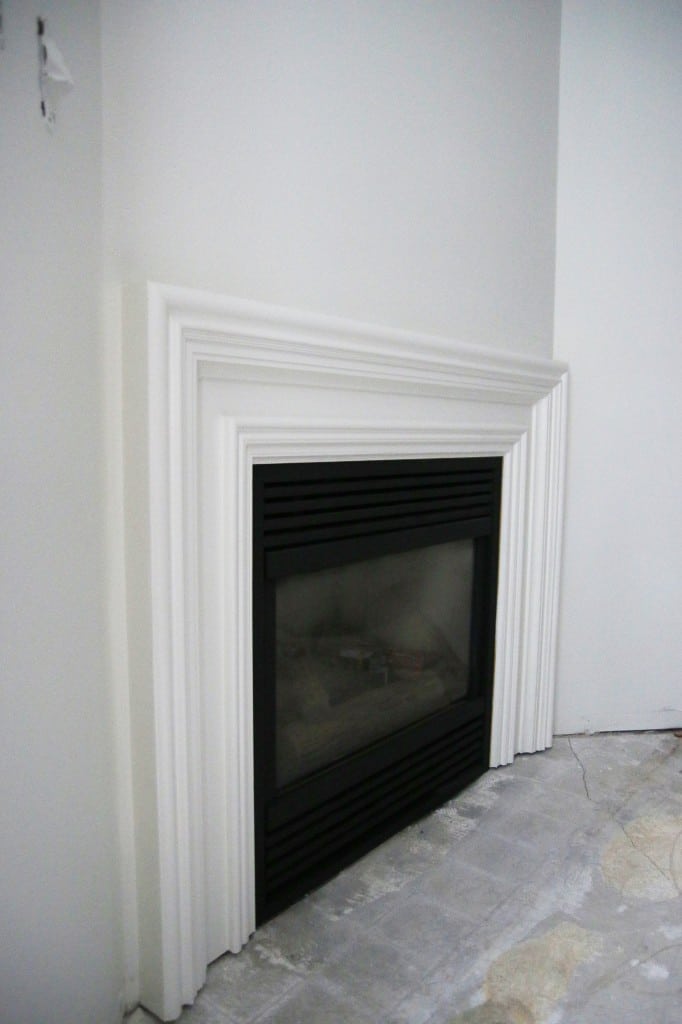 We’re so glad we decided to work with what we had. All in all, this project cost about $100 but looks like so much more. 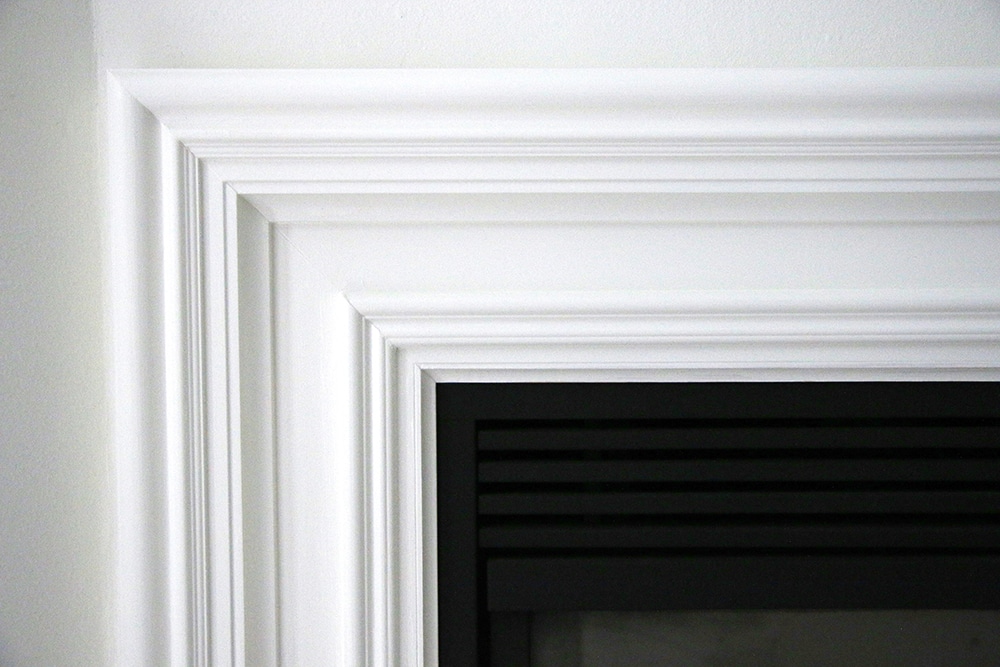 This particular fireplace doesn’t need a hearth, so we’ve opted to run the new carpet all the way up to it (which is why we left 1/2″ space under the new moldings). But besides the rough concrete slab floors, we’re thrilled with the improvement. 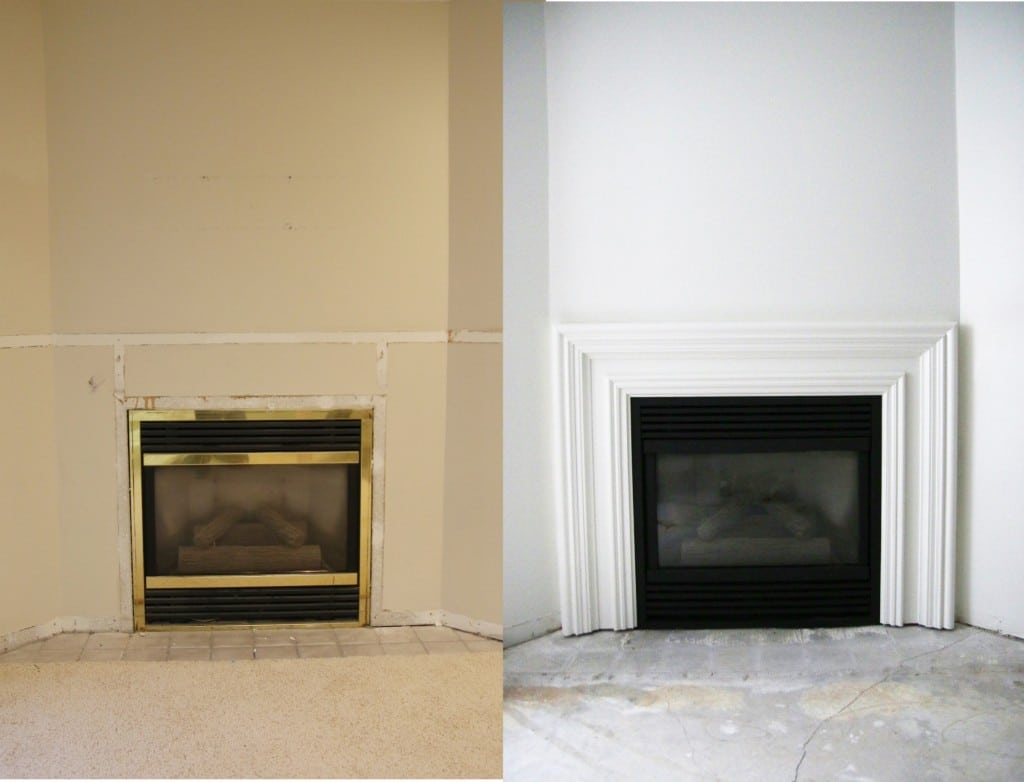 Tomorrow let’s talk sectionals! We finally nailed down the perfect one for this room.

« Really Great Pillowcases & Shams (Hint: You can Skip the Duvet!)

A Custom Sectional for Downstairs at an Attainable Price » 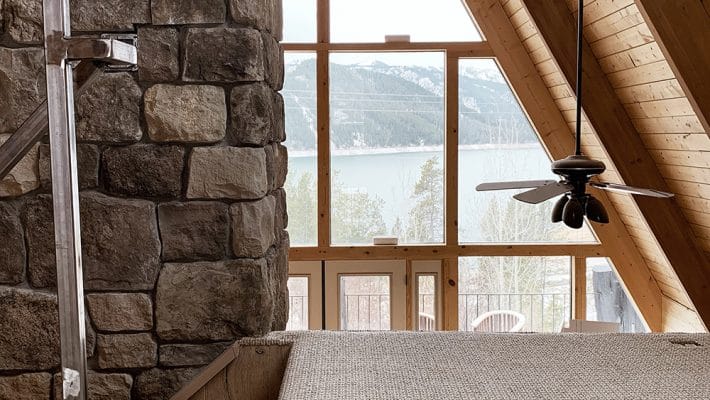 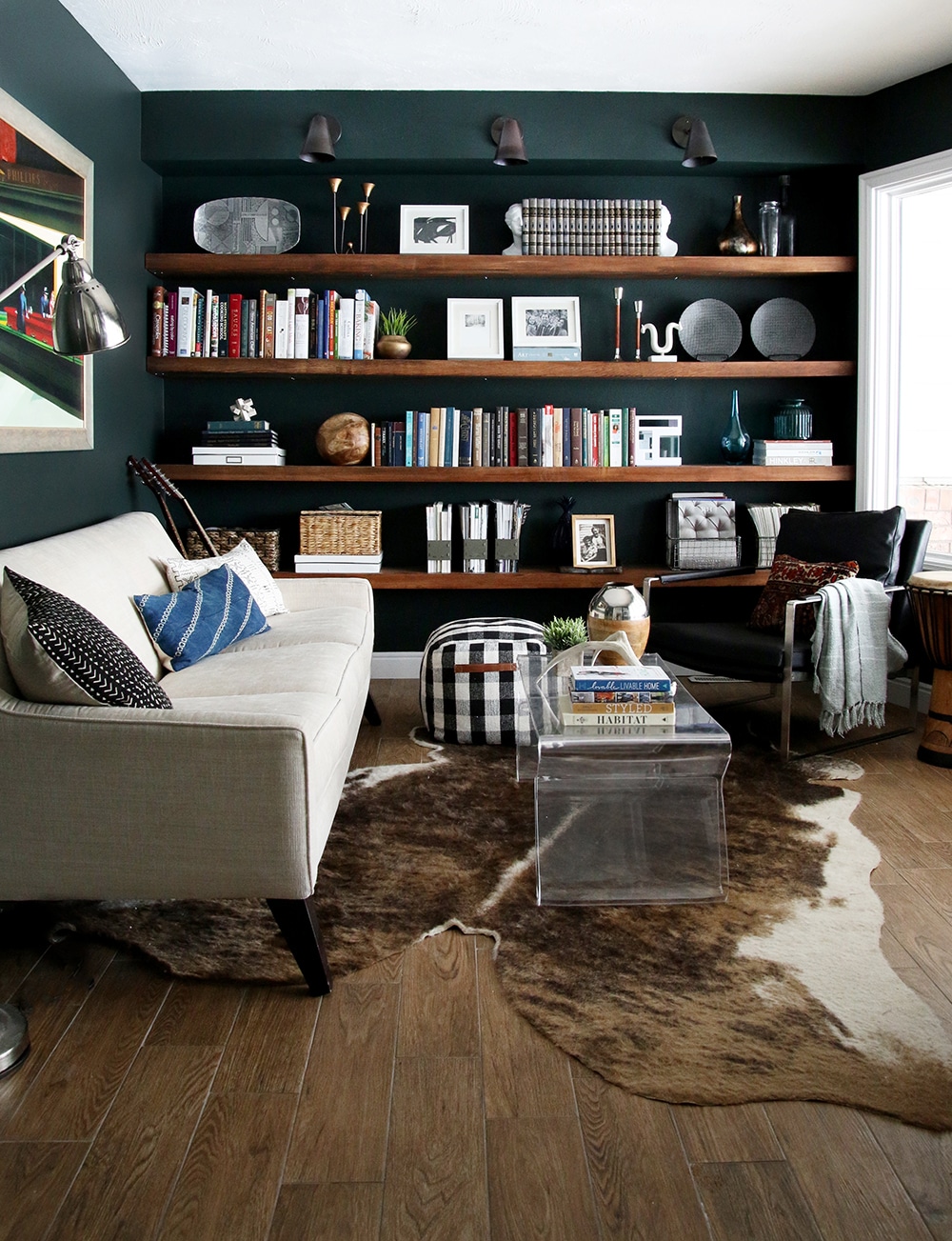 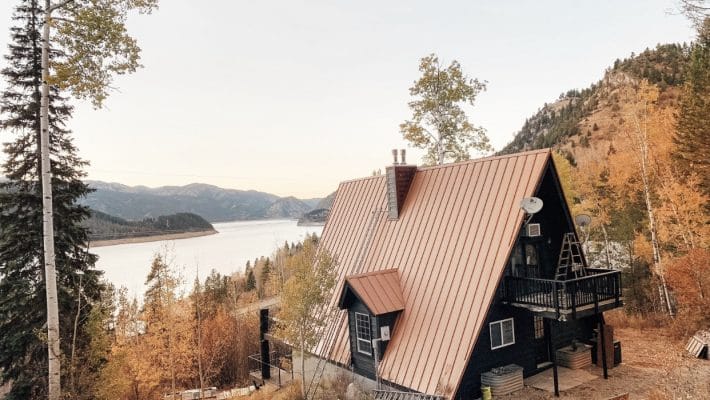