Up to now, “progress” in the cabin has looked more like destruction. Lots of things needed to be ripped out and redone, as a lot of the previous updates weren’t exactly up to code. Would you like an example? You’d like an example:

That’s one of the bigger ones. A huge no-no. This is the kind of stuff that gives DIY’ers a bad reputation. We are huge advocates of doing something yourself (obviously), but only if you know what you’re doing. There’s a world of information out there, and things like plumbing, electrical, and structure, should all be taken seriously and be most often left to professionals. Don’t cut corners. Or floor joists, for crying out loud!

Anyway, let’s talk about some of the exciting progress, because things are about to kick into gear. Or you can jump to the bottom of the post and watch the video instead. :)

You may remember that the heating and cooling in this cabin was pretty bad – an old school wood burning stove for the basement, a half-functional pellet stove for the upstairs, and completely broken electric heaters in the bedrooms. We added a new AC unit, a propane furnace, and ran new ducts all through the house for better heating and cooling, but still wanted the place to feel like a cabin. And you can’t have that without fireplaces. So we ripped out the old wood burning and pellet stoves and are replacing them with new, Napoleon propane fireplaces. 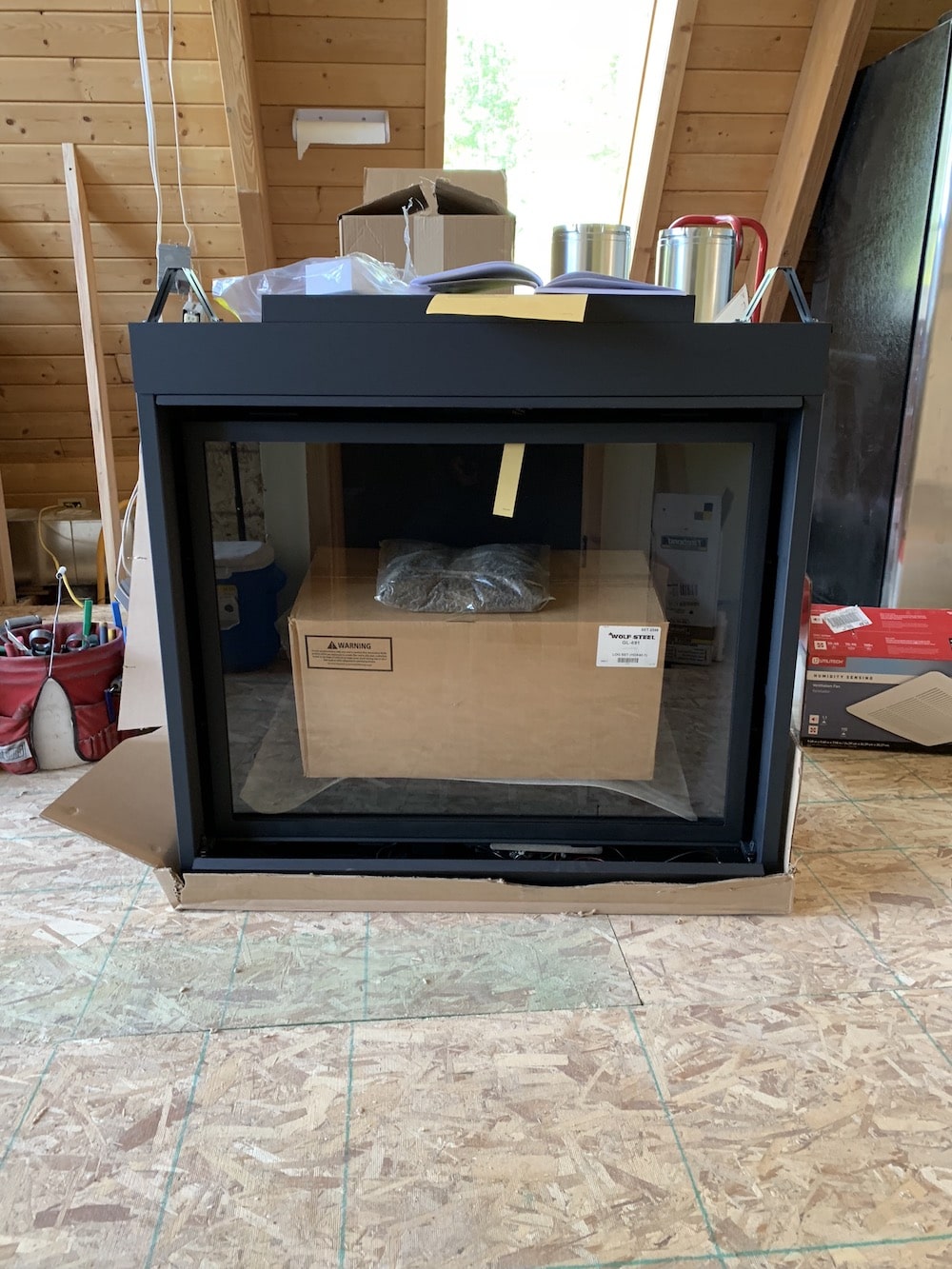 You may be wondering why we went with propane for the heating. There are a lot of reasons but it comes down to efficiency and convenience (also natural gas isn’t available up there). Propane is slightly more expensive than natural gas, but it burns more efficiently. So even though propane is more expensive, it balances out a bit. Especially if you can get a big enough tank to last through the winter and just fill it up during the summer months (propane is a lot cheaper in the summer).

Anyway, the fireplaces. The ventilation for the previous fireplaces was a bit shoddy and too large for the new fireplaces, so all the old stuff had to come out. 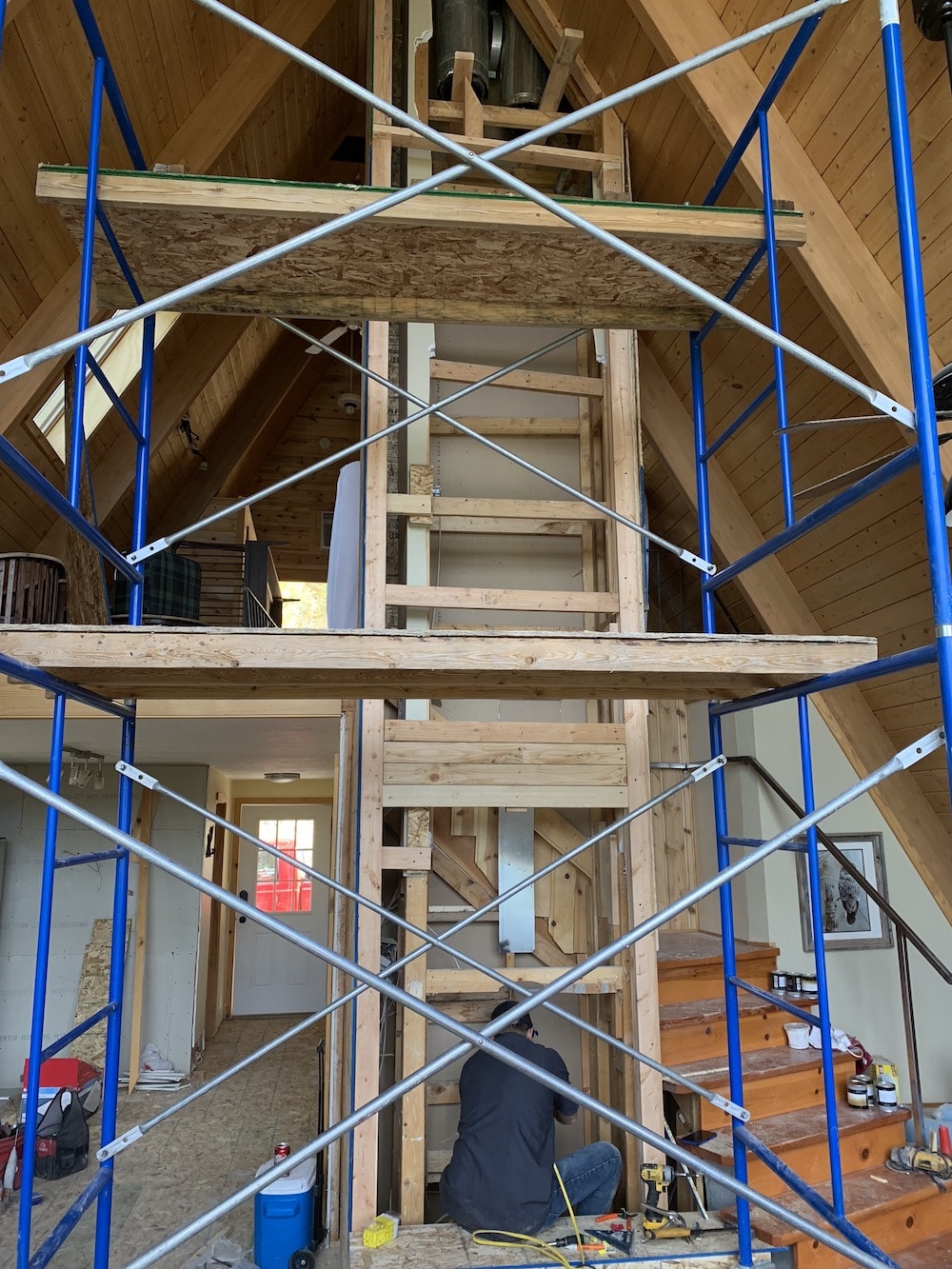 There was a lot of pipe running through this stack, and you can see the last of it at the very top of the above picture. And getting that last bit out was sketchy, to say the least. 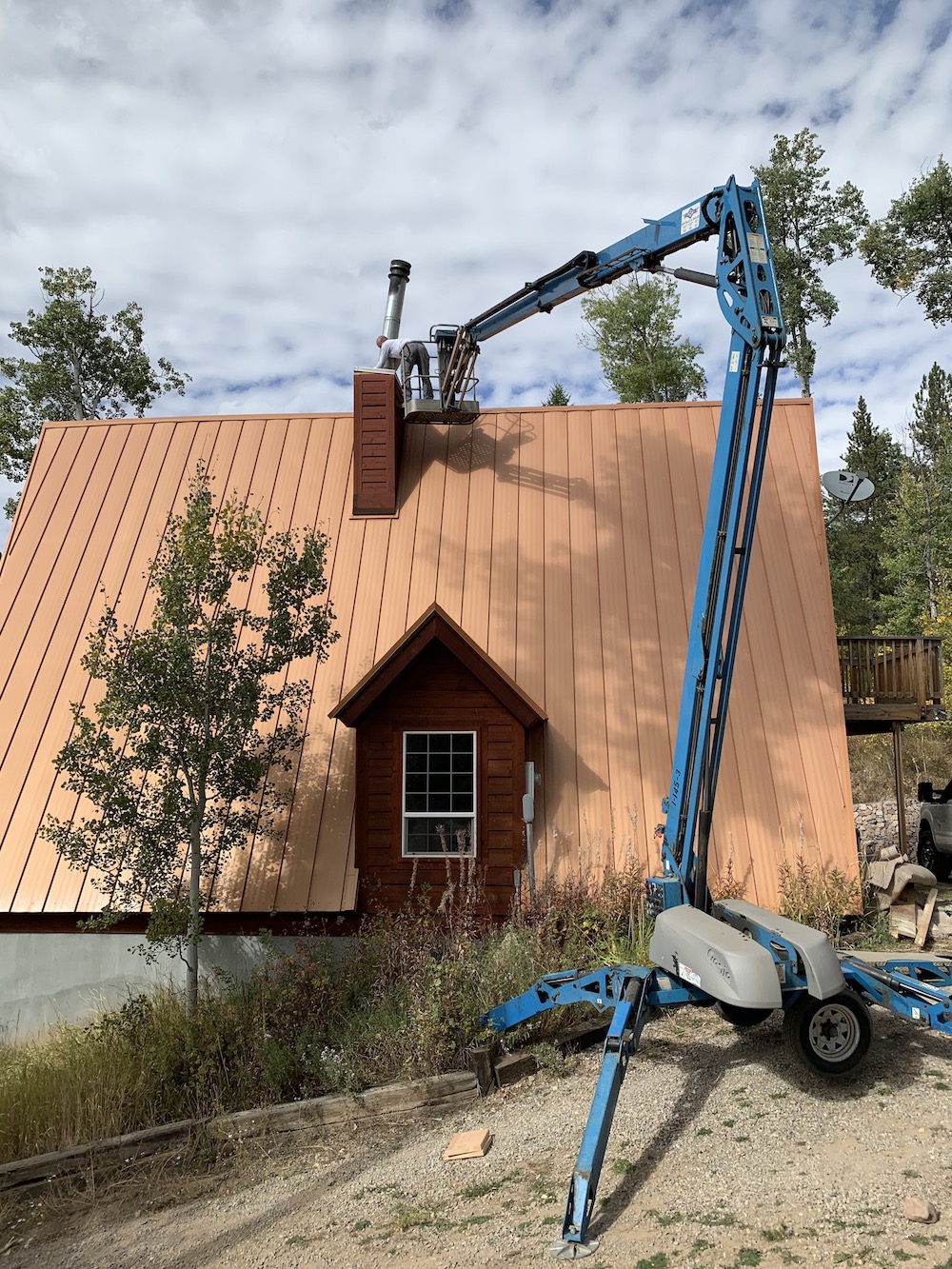 Our contractor brought a giant lift up the mountain and hoisted himself up to the chimney. He then lifted the old vents out (with some help from below, pushing it up) and brought them down to the ground before taking the new ones up and securing them in place. 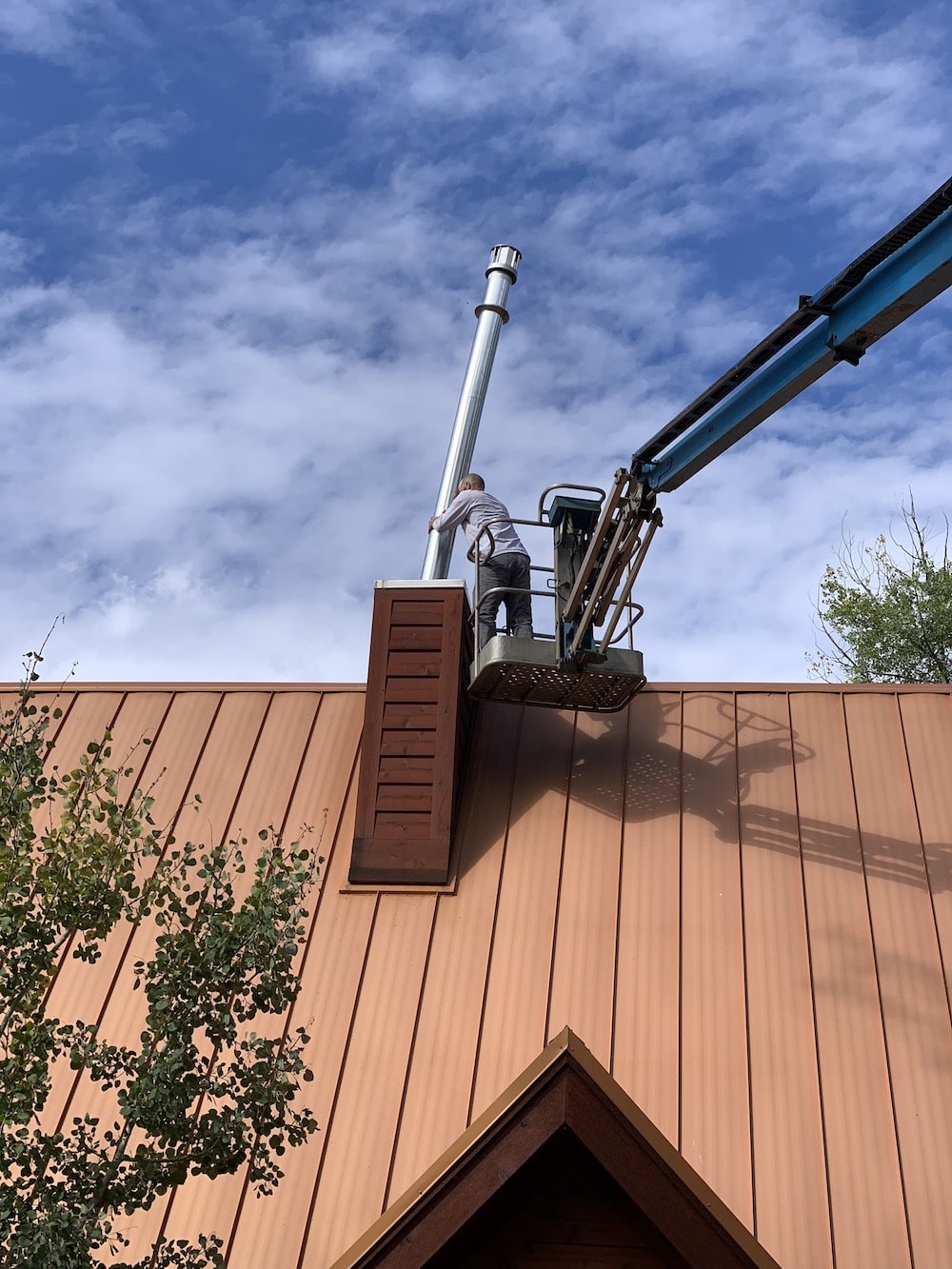 The new chimneys have both an exhaust and a fresh air intake integrated into the same tube, so they work super efficiently while shaving off a couple inches from the diameter. Once the top pieces were secured in place, they made their way down toward the main floor fireplace. 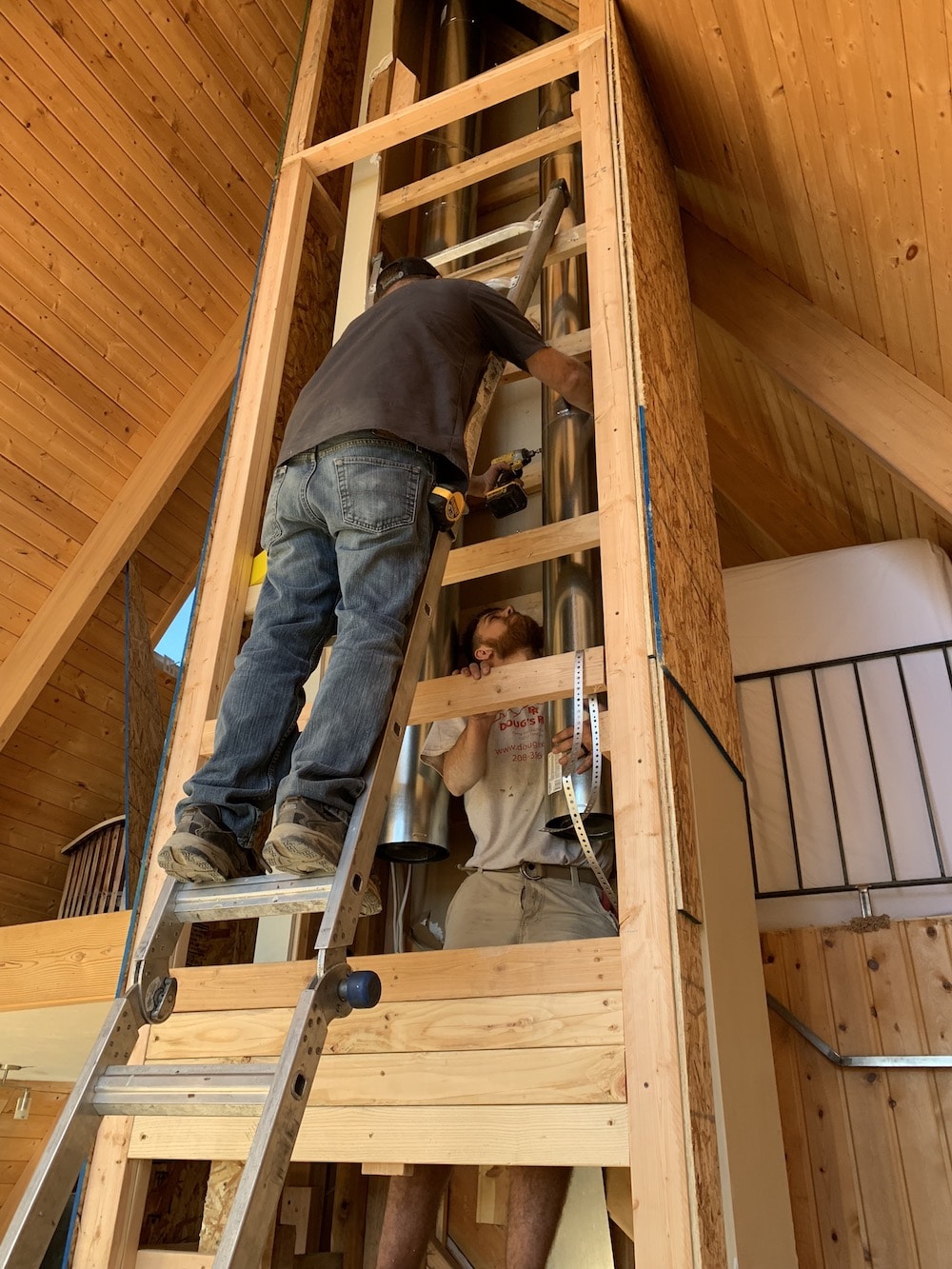 Then, they set the fireplace in. 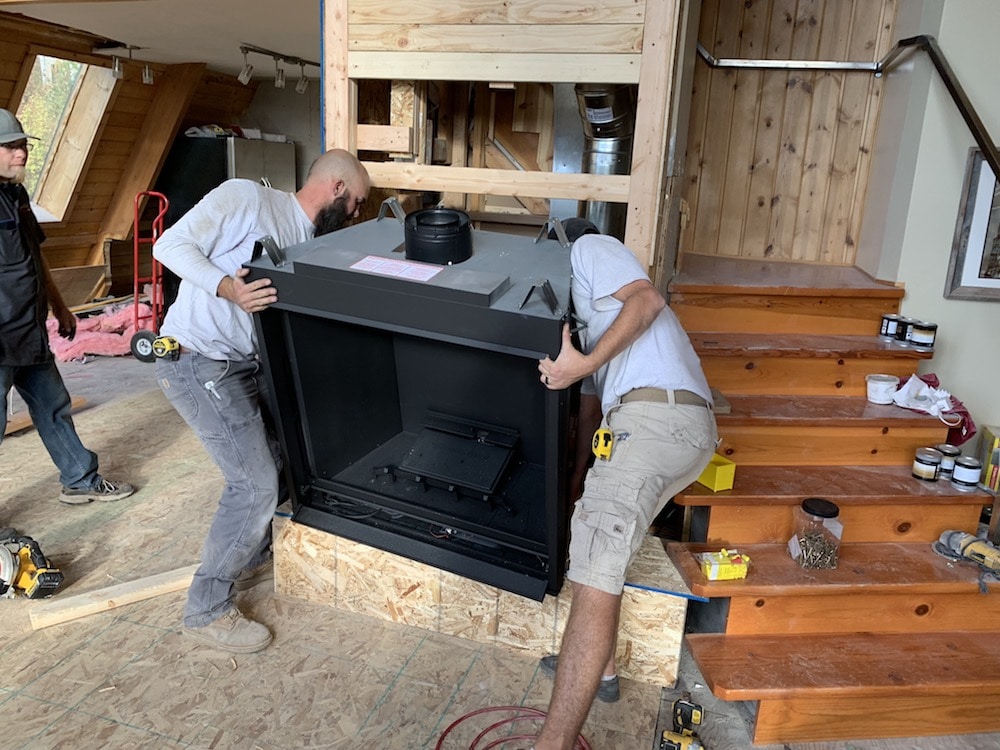 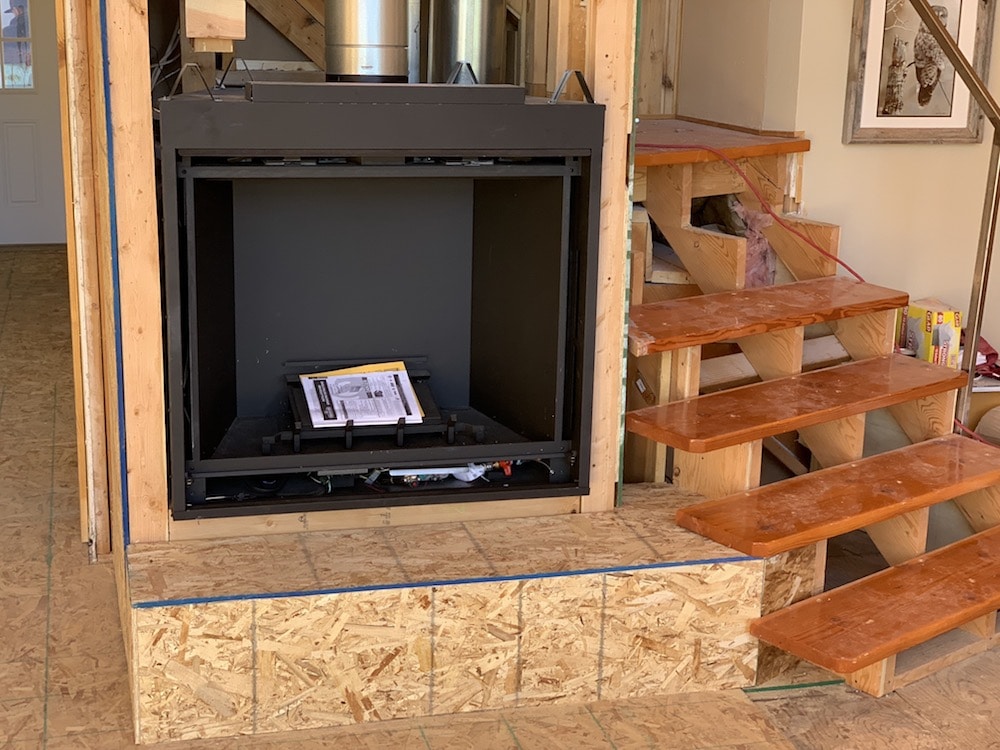 So, some great progress, but a couple things to note in the above picture. First, the fireplace isn’t mounted or installed yet – they just wanted to get it in place so they could start measuring the rest of the vents down to the downstairs fireplace and get them ordered. But that should happen in the next couple days. The second thing is the hearth. It’s going to be a little different from how it is in the photo – squared off on the right like it is on the left. But we’ll get all that figured out. As of now, we’re just so excited to see the progress. 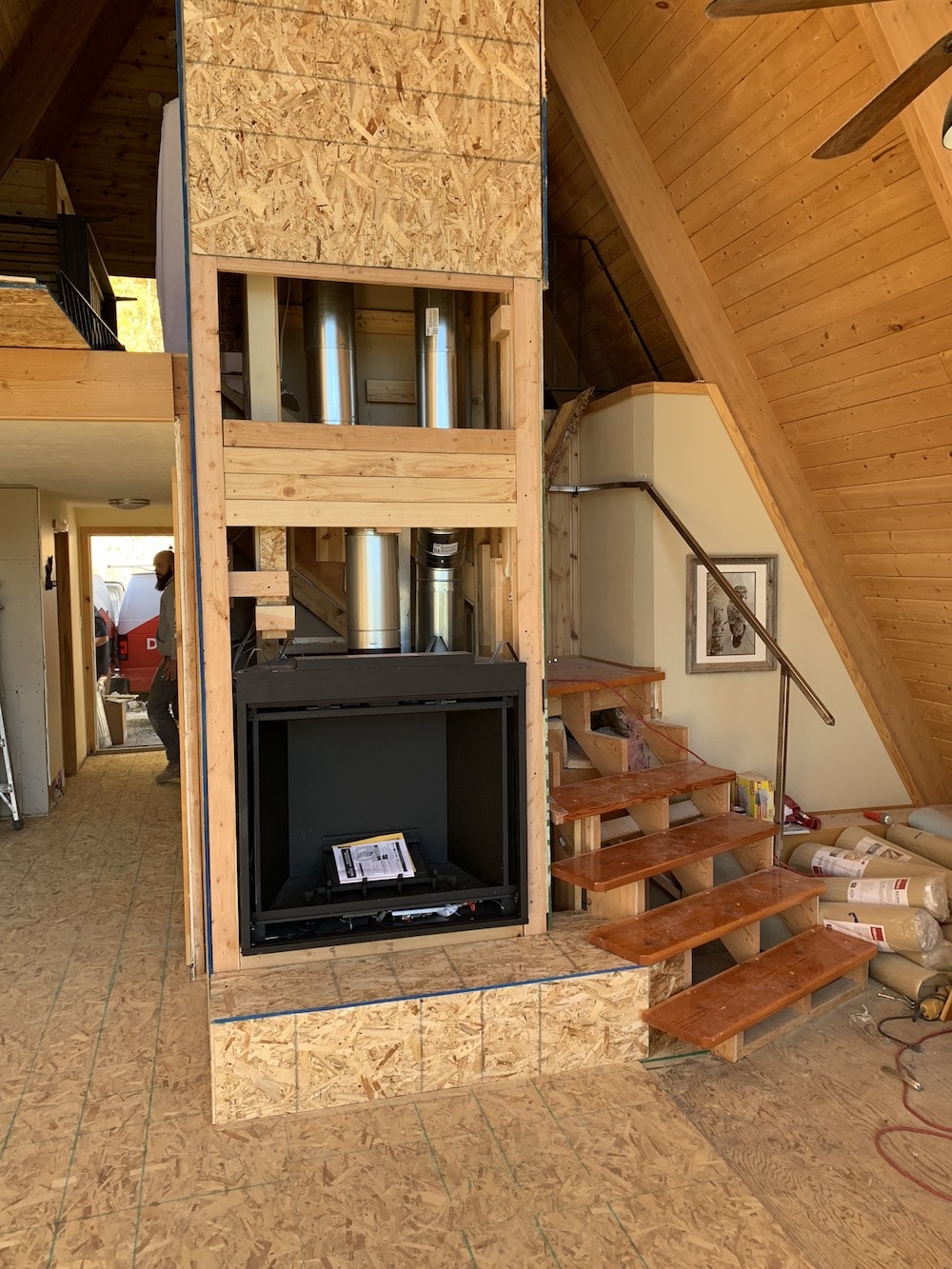 We originally planned to stain the cabin and deck ourselves, but winter is rushing in around here (28 degrees this morning, goodness sakes) and with some delays in other things at the cabin we were running out of time. so we decided to hire it out and they started this week. 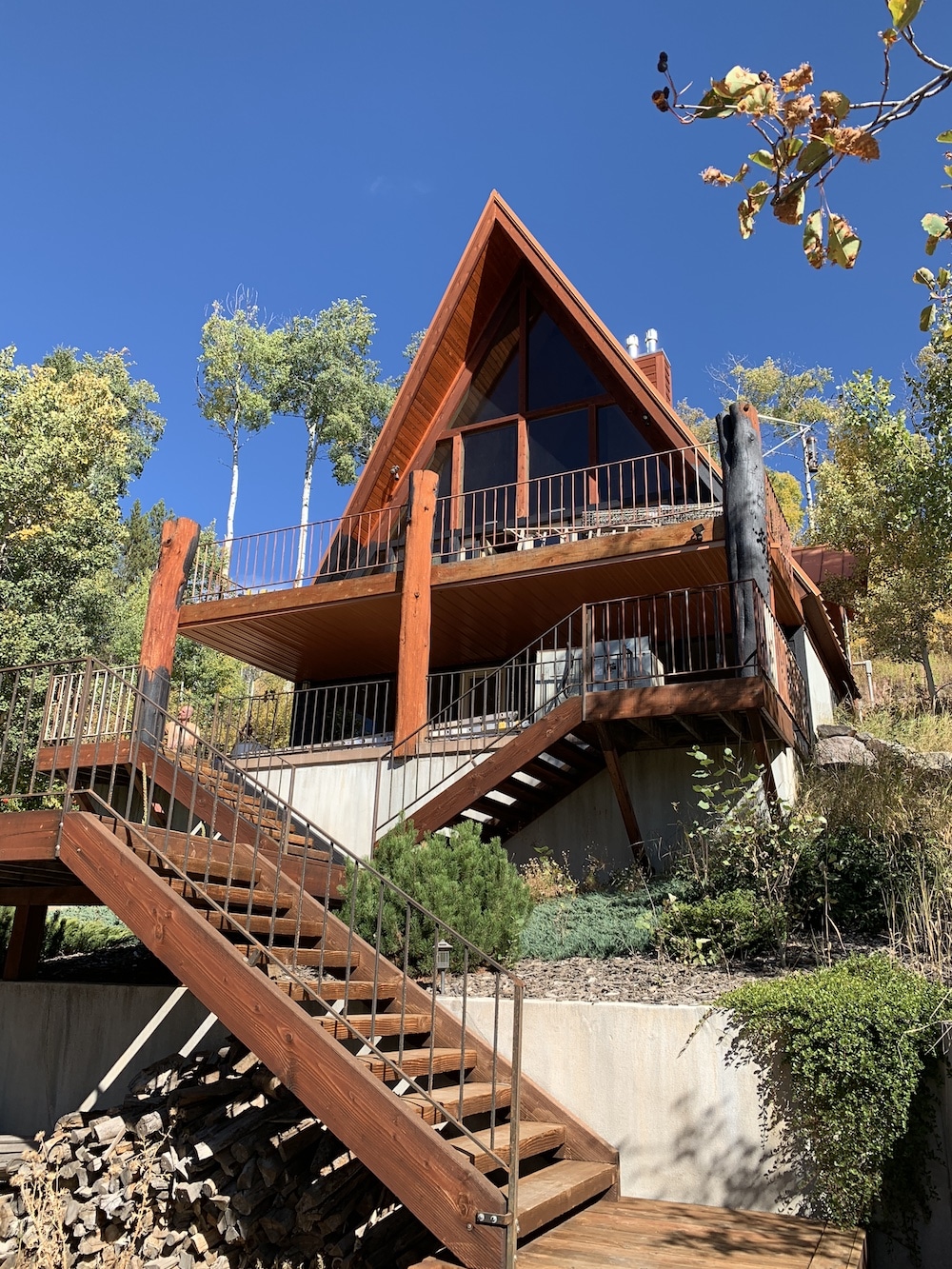 You can’t see much in the above photo, but there’s some stain on the tree posts and parts of the stairs. Here are some closer shots of the progress. 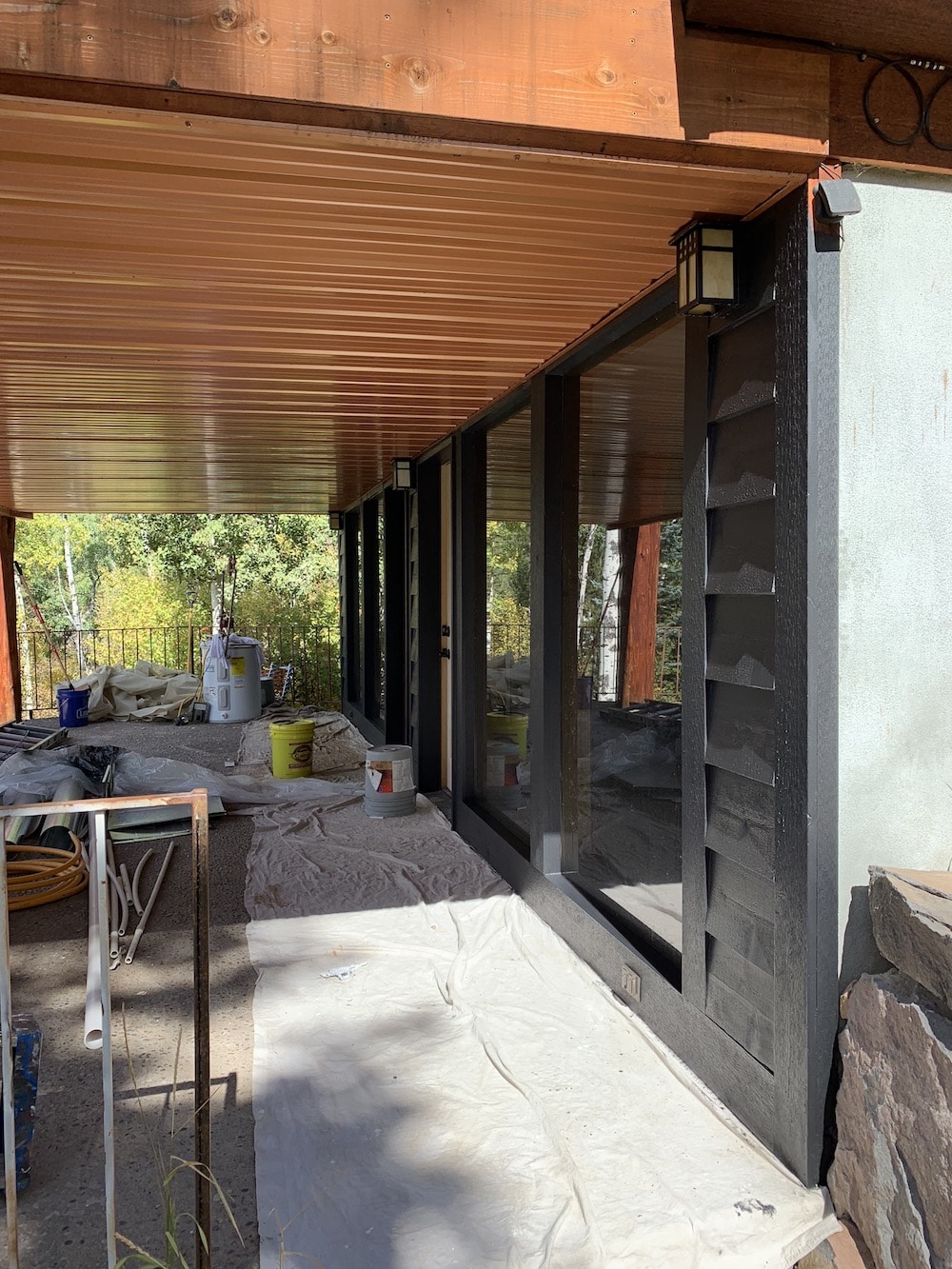 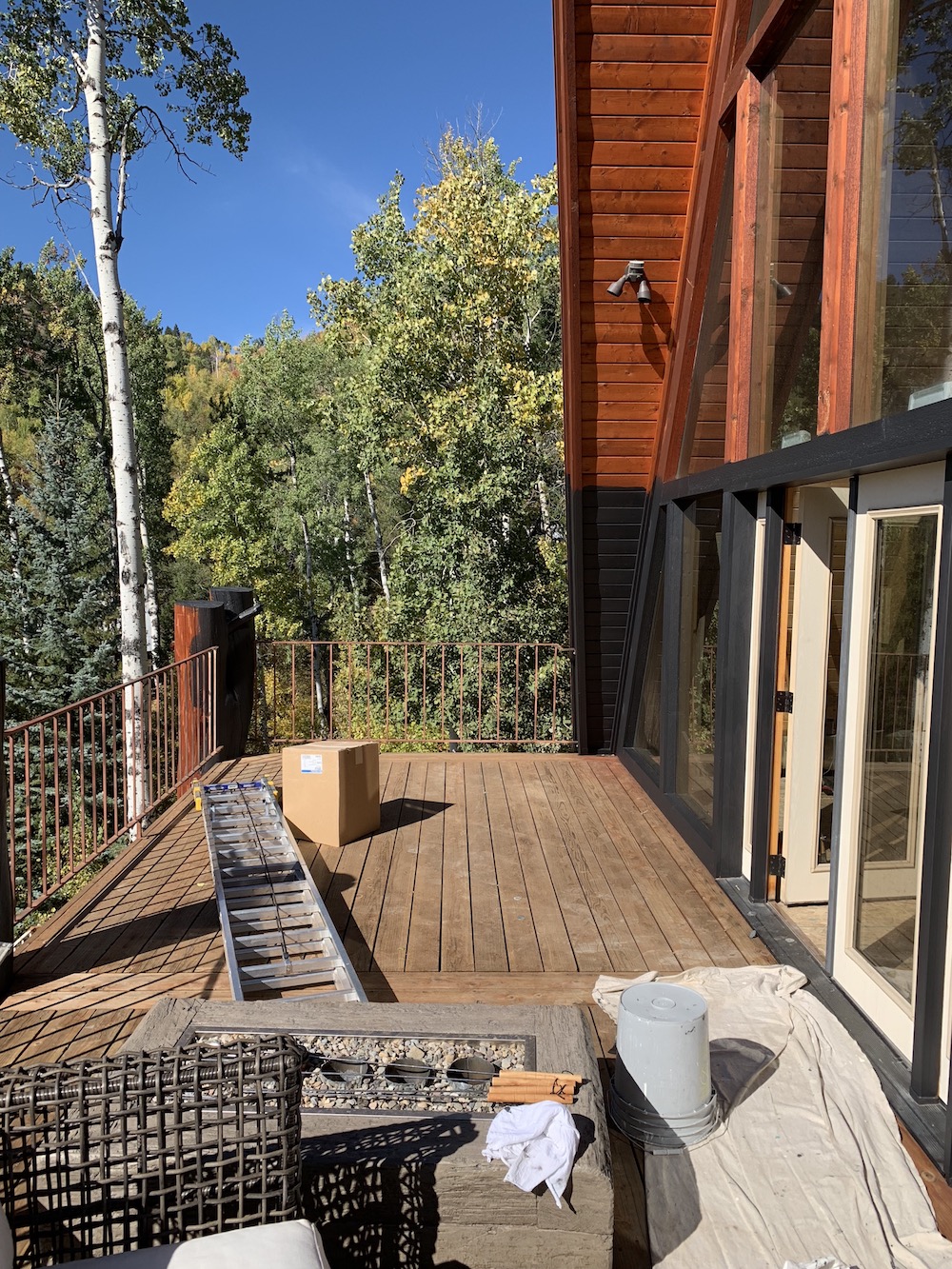 Even though they’re just getting started, you can already tell it’s going to look so good! We honestly can’t wait to see more progress on this every day. 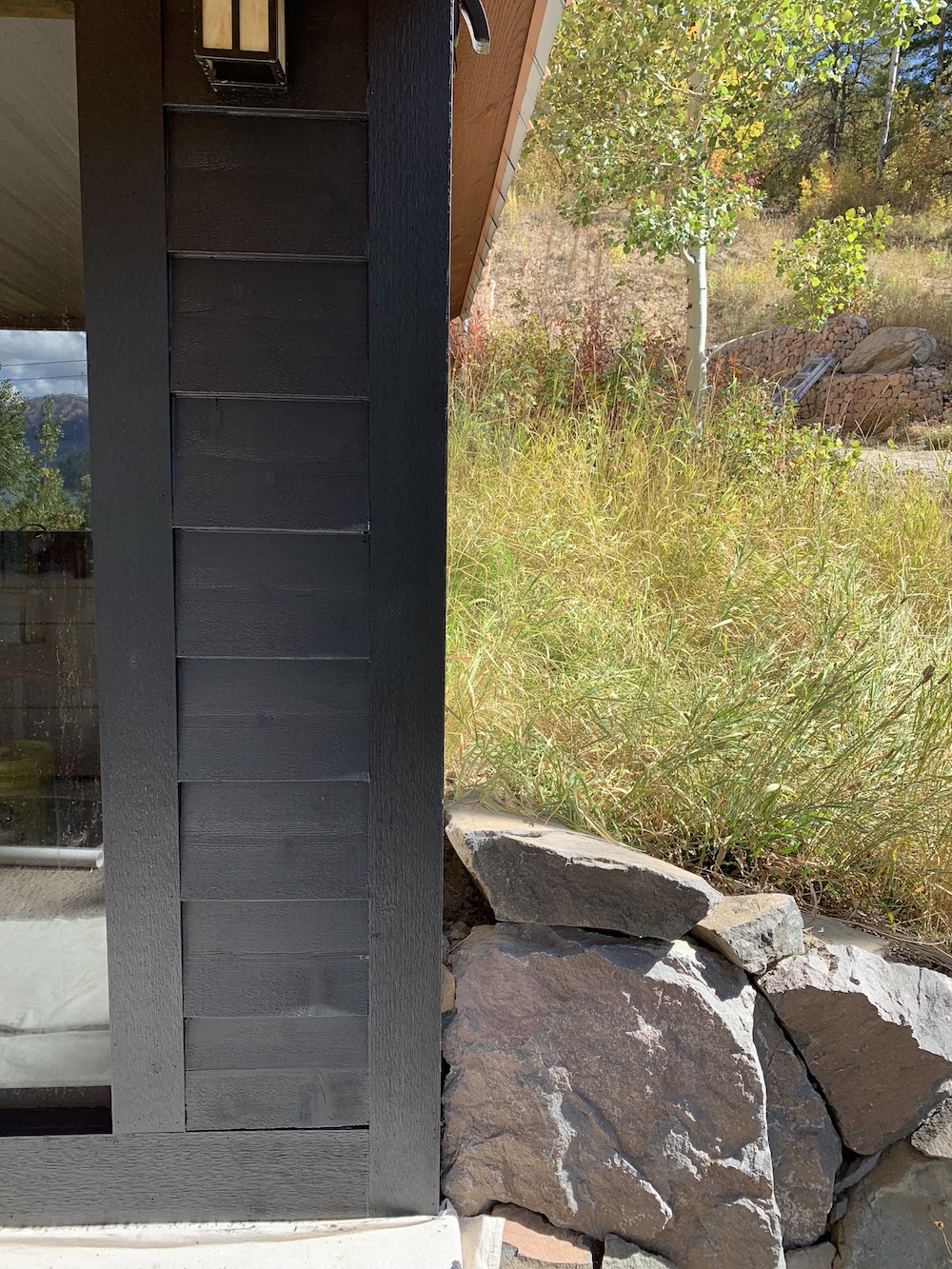 The flooring from Stuga Studio have arrived and they dry-laid a few rows to get some measurements. They’ll take them back up to get the underlayment down, but our contractors are already raving about how awesome these floors are (we agree), and we couldn’t possibly not sneak a picture while they were in place: 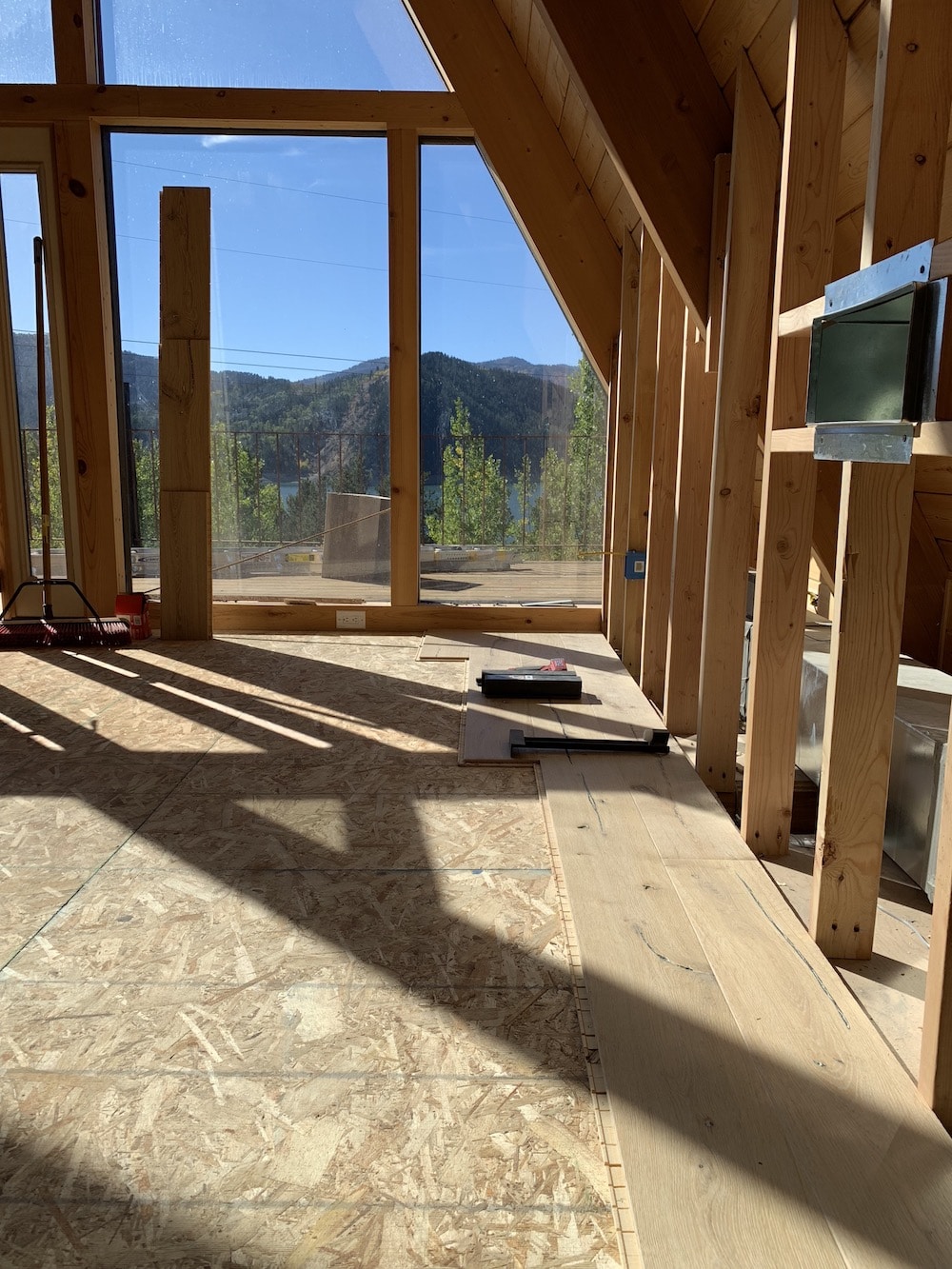 There will be a lot of progress happening on the floors this week, so make sure you’re following on Instagram to see the updates. But can’t you just picture it?! It’s going to be so. GOOD! I cannot wait. Other things happening this week include (hopefully) the first of the stone work on the upstairs fireplace and the flat parts of the deck getting stained (they’ll be more of a natural color in contrast to the black).

This project has already been going for almost two months just getting the HVAC figured out, but we are so close to being able to get in here and work on the main floor and loft. They’re making a big push for those areas so we can start on the kitchen while they finish up everything downstairs (the new bedroom/bathroom, flooring, plumbing, fireplace, stone work etc.), hopefully all before the snow arrives. Phew, we like to stuff the projects in, don’t we.

« A Gallery Wall of Favorite Toys for the Playroom (+ a Coupon Code to Mixtiles!)

How to Repair, Prep and Restain a Wood Deck » 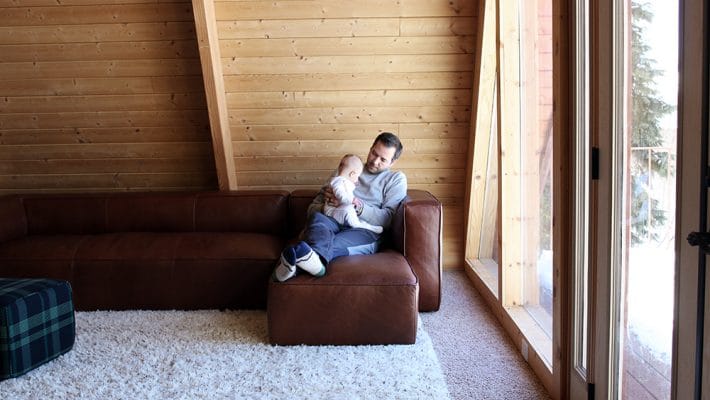 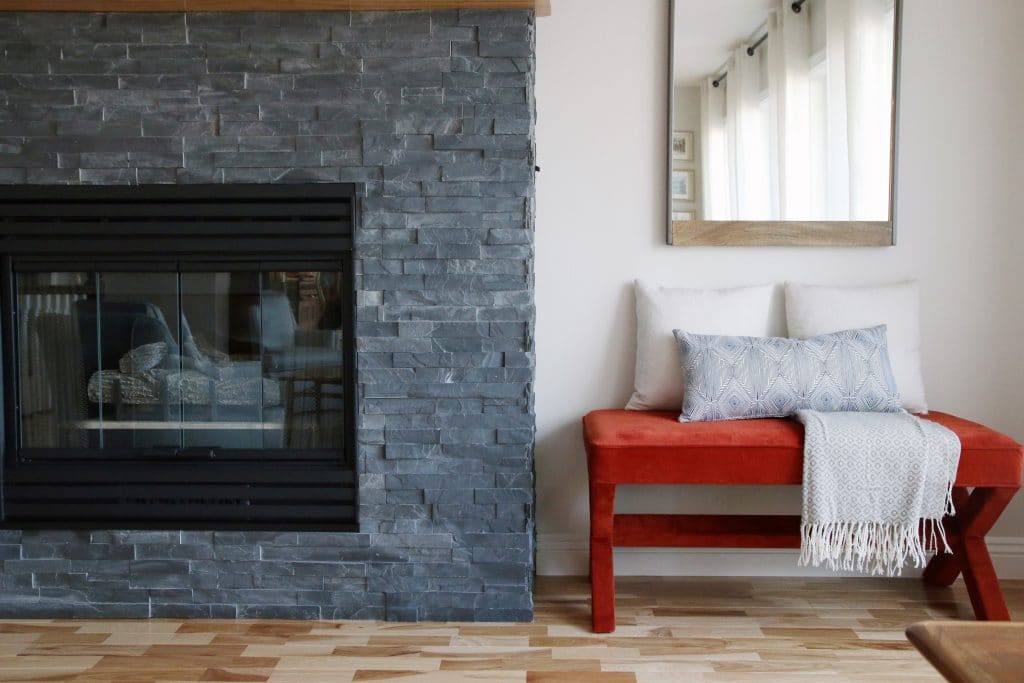 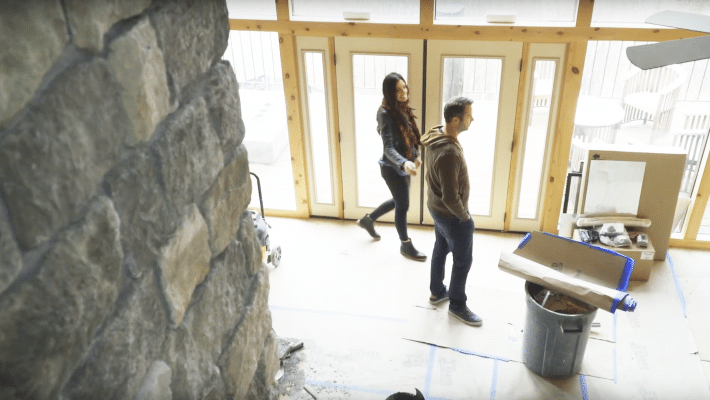