Over the last week, we have been working on our bedroom and I am so excited to share some progress photos with you. Even in our last house, we never really really got to our bedroom, so we are investing a little bit of money into this just-for-us space and it has already made such a difference. A bedroom is such a personal space and it is finally starting to feel like it reflects our personality. It feels comfortable, which is of course how a bedroom should feel, but our bedroom has always just kind of felt like where we slept. Here’s how it looked when we moved in: 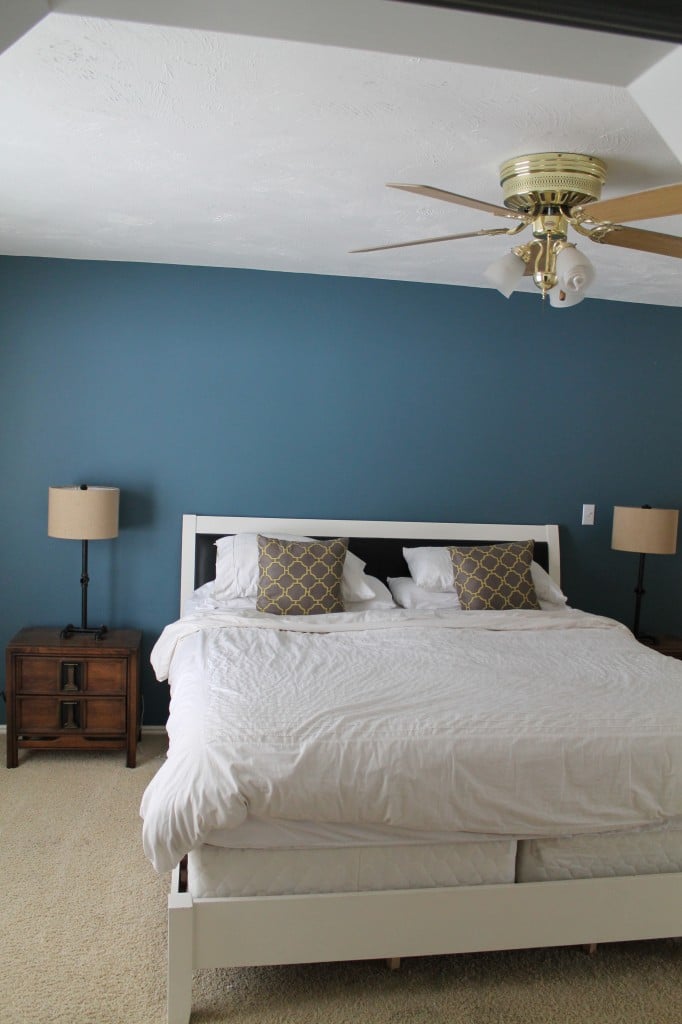 Over the last year and a half, we tore up the old carpet and laid the same ceramic wood floors, but all the furniture remained the same. We did paint the walls a moody dark grayish blue-green. 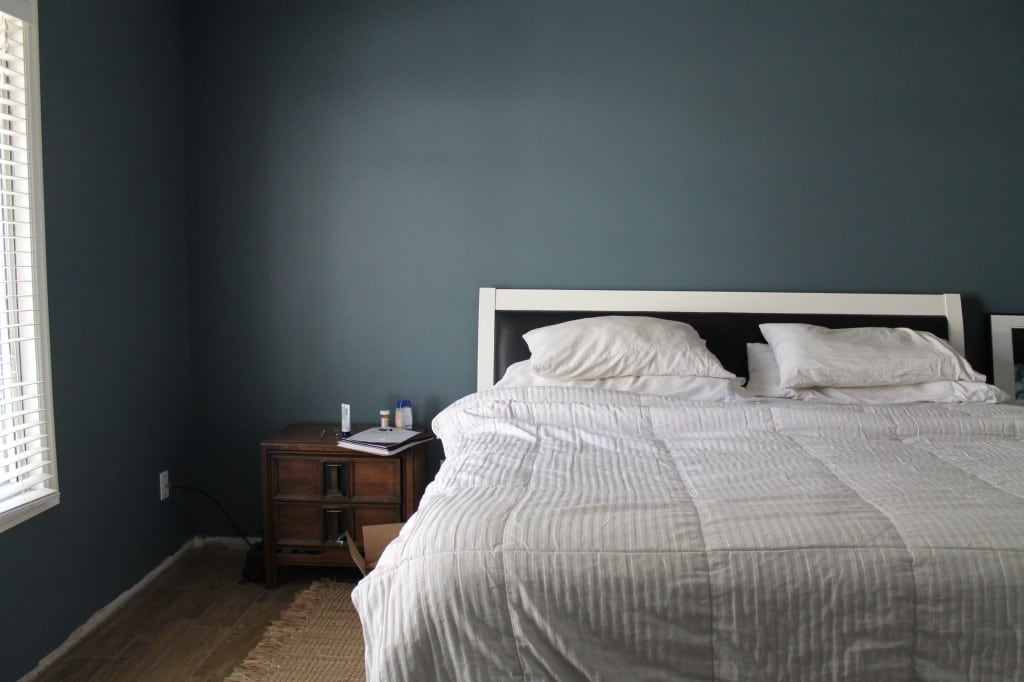 Now, only the basics are in place–but the basics are all the big pieces. We ordered new lamps, a new duvet, new bed and new rug (whew!) over the past few months and  last week we gave our old bed to some friends, sold the jute rug that has made the rounds in both of our homes and here’s how the room is looking now that it is starting to come together. 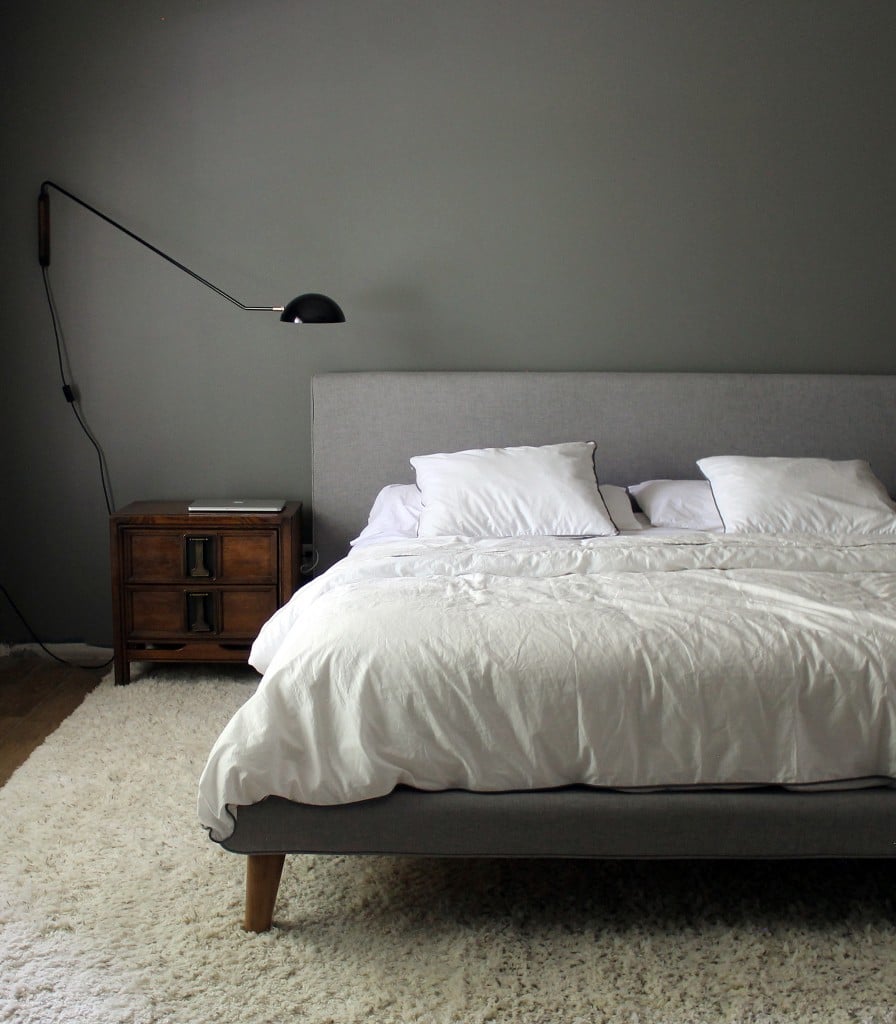 Wait. Did you guys paint again? Yes. Yes we did. Just over the weekend, actually. We knew there was a possibility we’d need to paint the walls once the new bed arrived. It’s just so hard to read undertones, especially gray undertones!, in upholstery by just looking at a photo online. So after the bed arrived last week, it took my all of 24 hours to decide the blue walls weren’t working with the new bed. It just felt jarring. Terrible iPhone pic coming atcha: 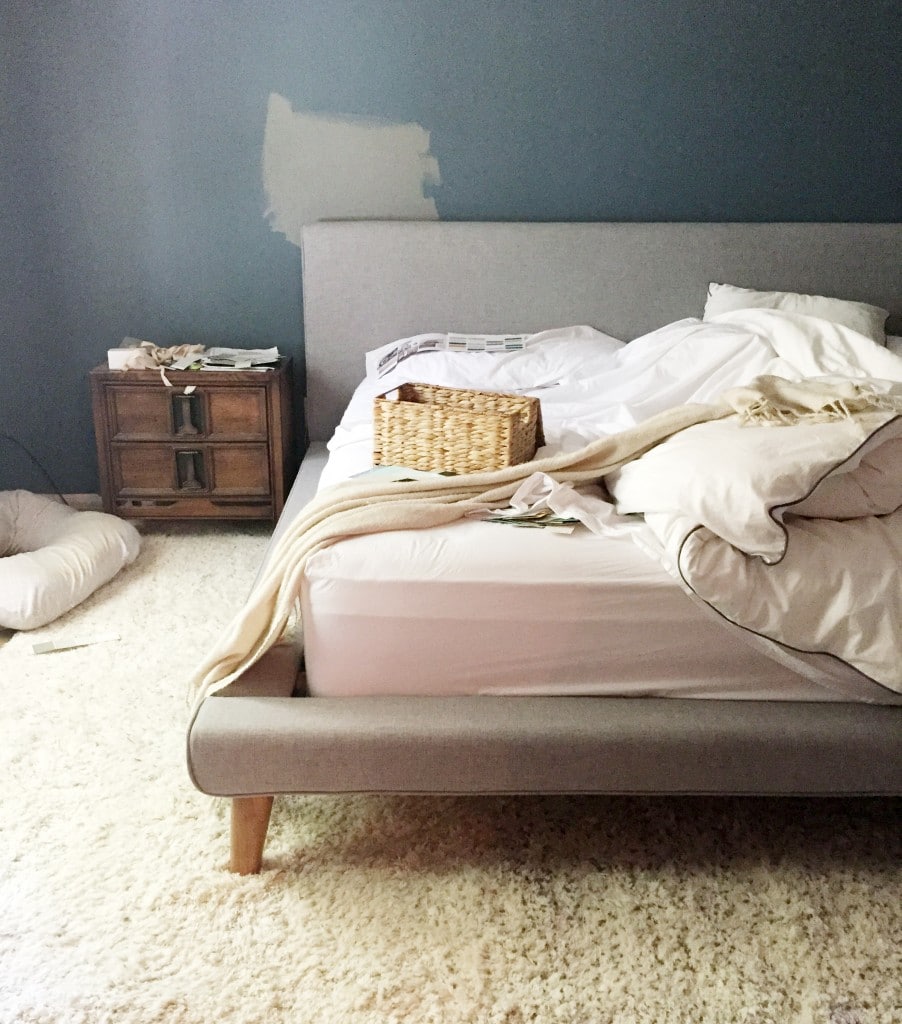 Do you see what I mean by jarring? The undertones just barely bordered on clashing, but since there were so many different colors going on, it didn’t feel restful. I pulled out my paint swatches (that’s the basket you see on my messy bed in the above photo) and sifted through until I found a warm shade that was just similar to the upholstery color but just a shade or two darker. I settled on Benjamin Moore’s Chelsea Gray and knocked it out in just a few hours. 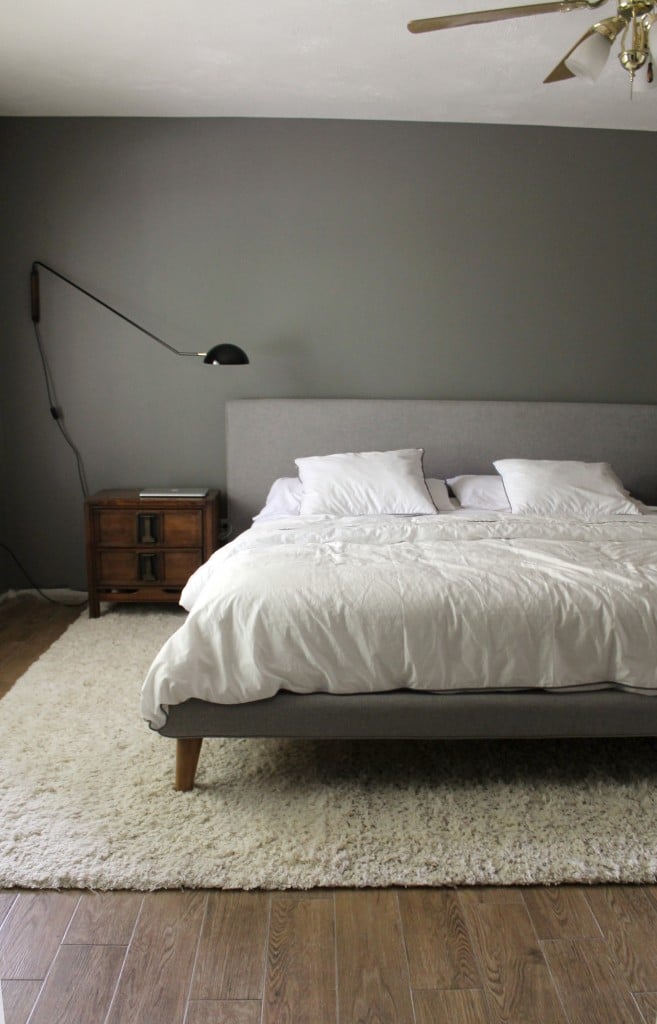 It’s the most calming color–we love it and highly recommend it!–and I think the subtle tone on tone of the bed frame and wall color really add to the overall peaceful vibe. Speaking of the bed frame, we decided on the Mod Upholstered platform bed from West Elm and we are so so happy with the shape, height, the fact that we were able to ditch our box springs for something lower and the details. The upholstery is so beautiful and the piping along the edges really makes it feel like something special and a whole lot more expensive than it actually was. 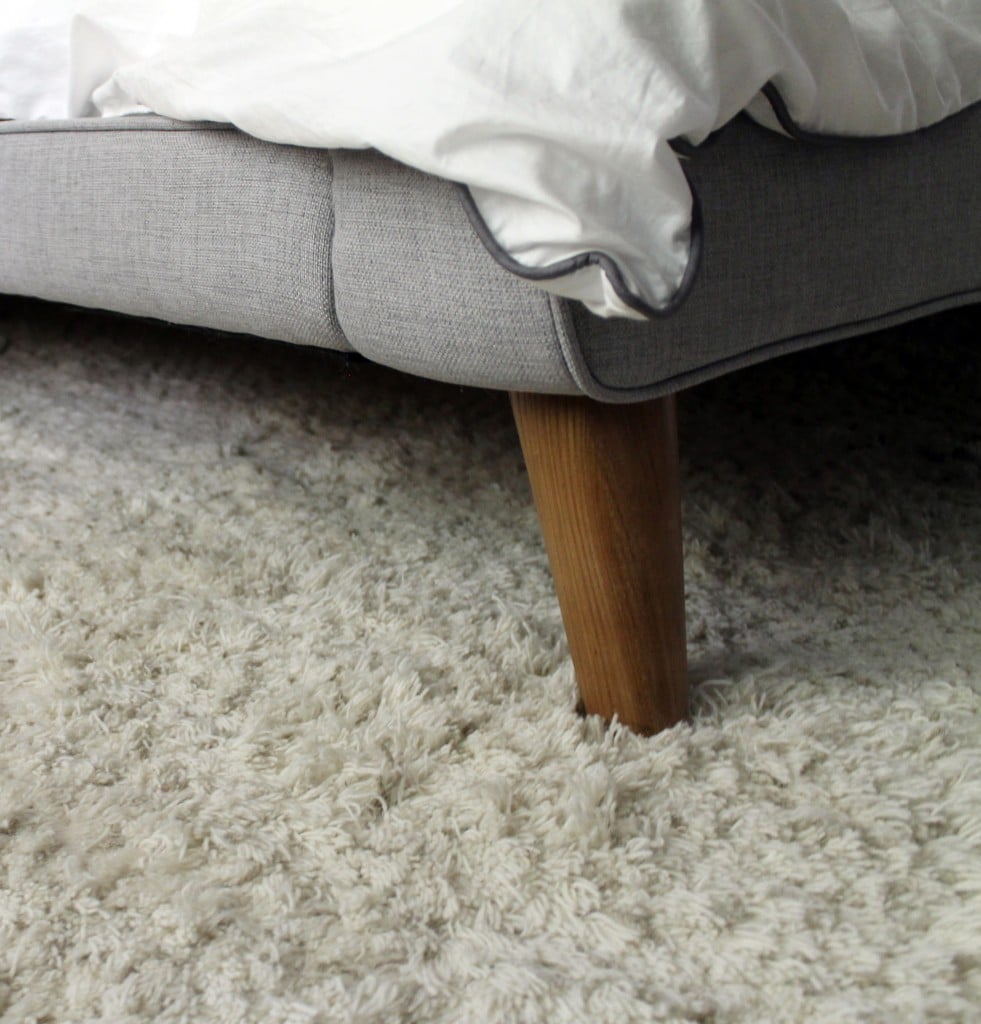 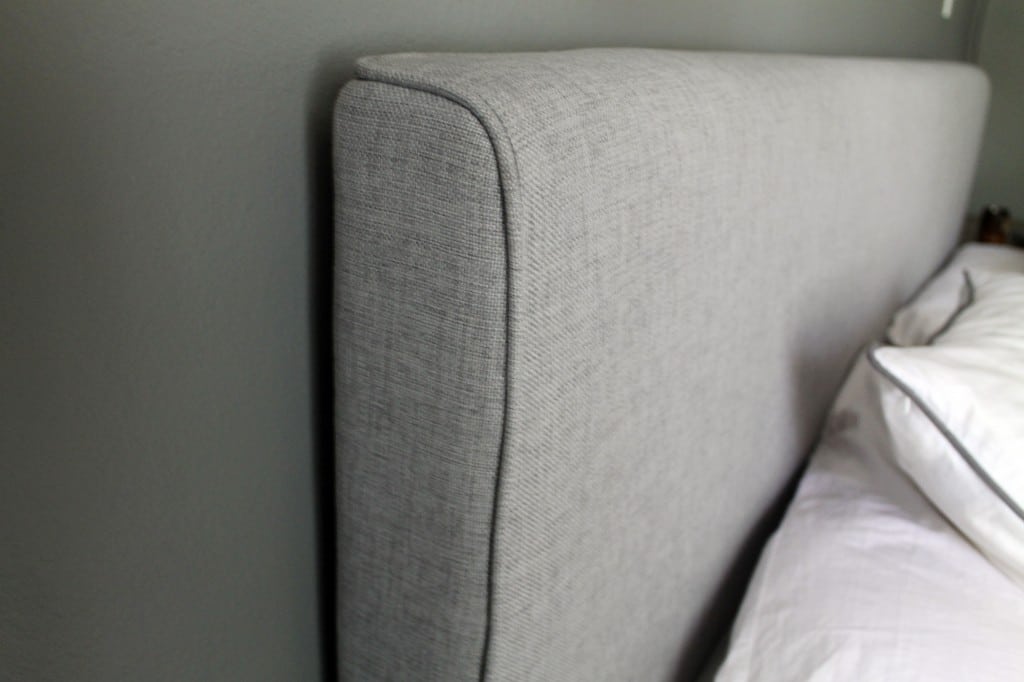 The rug, we also ended up ordering from West Elm. It’s the Steven Alan Speckled Shag Wool Rug. We were so torn on these options, but in the end West Elm was having a rug sale and I felt like this one felt so classic and soft underfoot. And boy! Did we make the right choice! It is so soft! One thing I didn’t really realize online is that the salt and pepper-ness is kind of ombre in the rug. So it starts off really peppered near the door and then by the window it’s hardly at all (you can see that two photos up.) The whole thing feels like a fresh version of the Moroccan rugs that are everywhere right now. 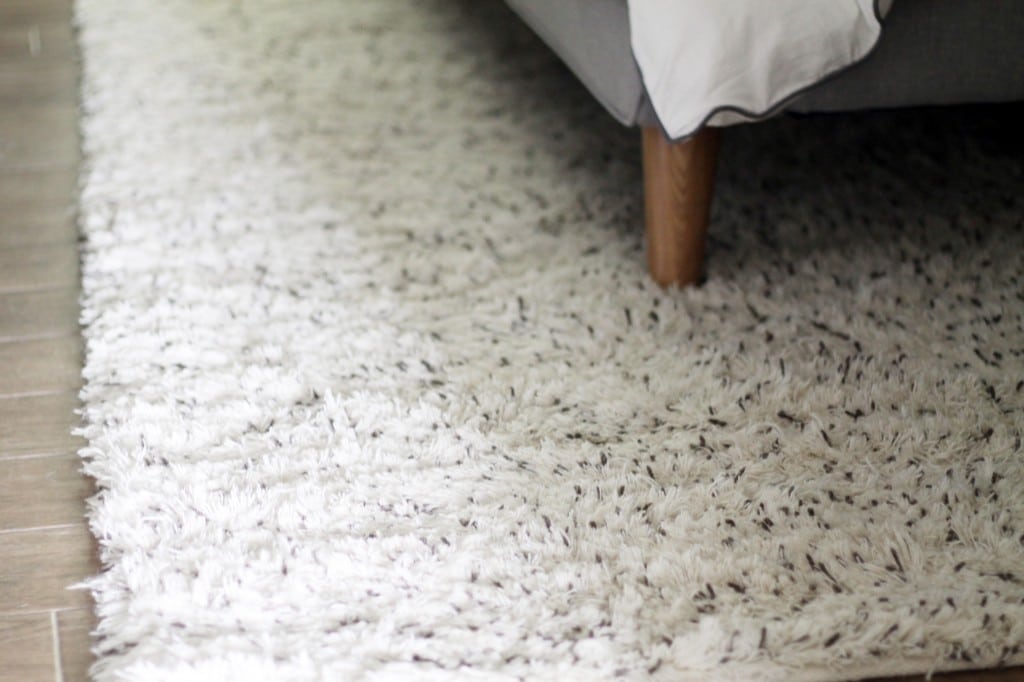 When searching for bedding, I really wanted something simple and basic and versatile, but also a little special. I found this duvet set (The Hayes Nova White Duvet Set) from Crane & Canopy  and the dark charcoal piping about did me in. It was love at first sight. I’ve been frustrated over a lot of duvet covers in the past, in fact, we gave up on them for a good year because the constant stuffing was so annoying. This duvet cover brought us out of that funk. It has a hidden zipper and an innovative (yes, a duvet is being innovative!) design that rocks. It’s soft. It definitely needs ironed. But we love it. 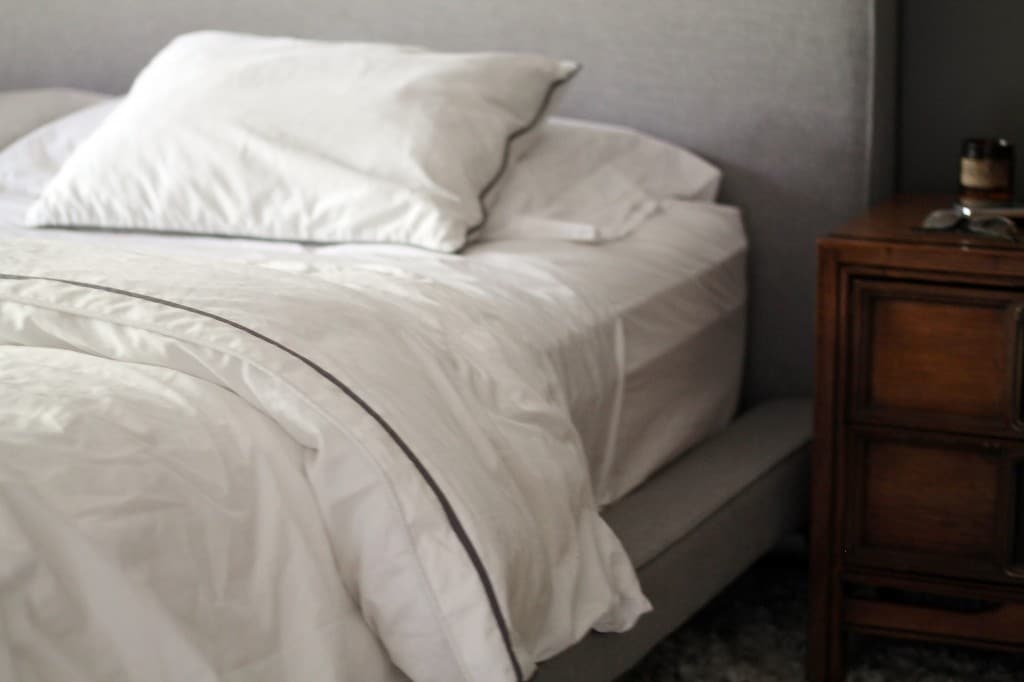 We decided to hold onto our nightstands and I feel like they are working in here now. Maybe for the first time. But, it could be because of the new lamps. 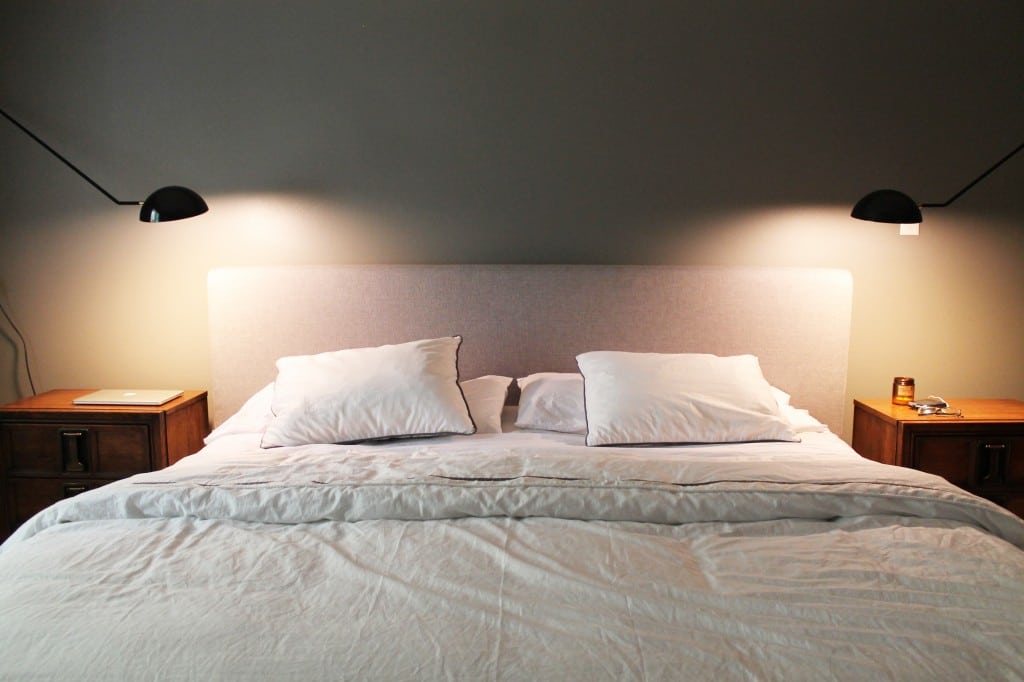 I have been eyeing the Mantis Wall Sconces from CB2 for a good year now and I finally pounced when I determined they could work in our bedroom. They are a little quirky for a bedroom, and I like that. They aren’t your run of the mill bedside lamp and I guess that is what sold me on the idea of using them here. They aren’t photographing as large as they are in real life (I think our king-sized bed is throwing everything out of proportion a little bit.) But Chris snapped a photo of me on my laptop so you can kind of see the scale of everything. (For reference, I’m 6′ tall.) 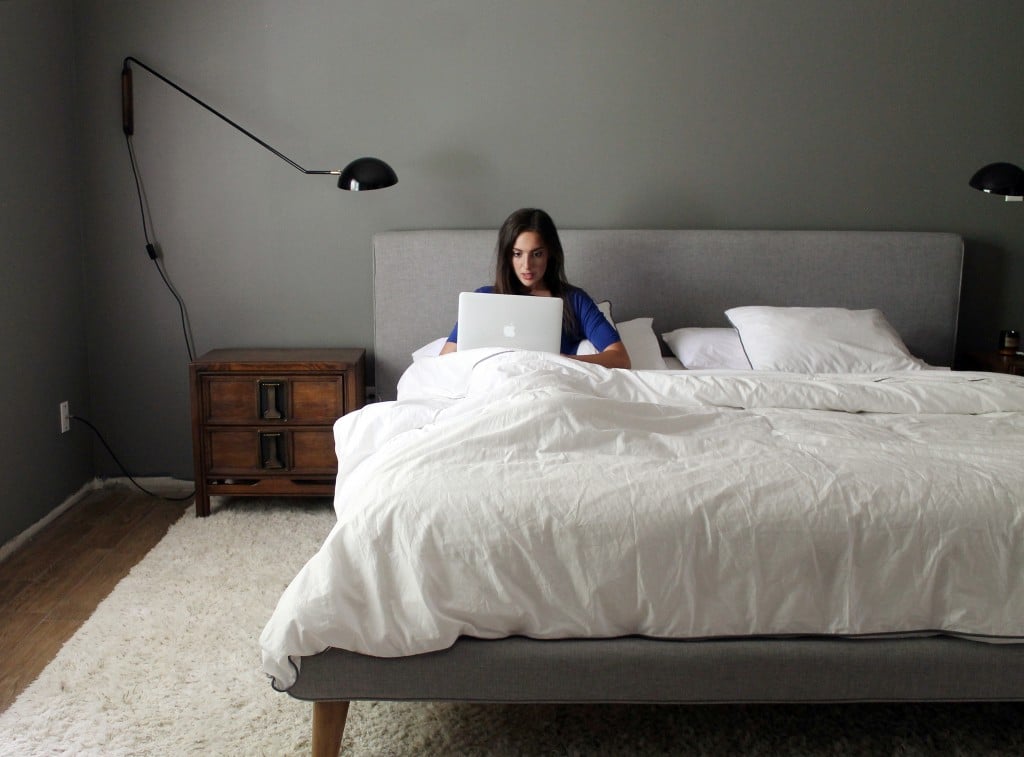 What can I say–I am so very intense when I email. Ha! Now that all the building blocks are in place for the most part, here’s a breakdown of what we still plan to do in here. 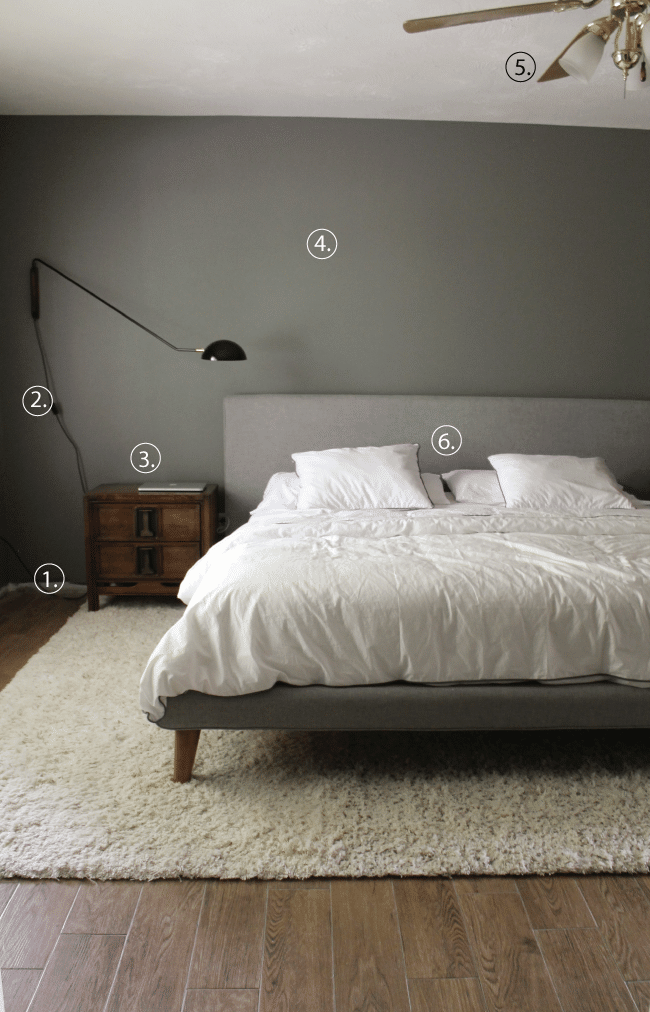 1. Baseboards. We need them. They are looming over me.
2. We need to address the cord situation with the lamps. I kind of don’t mind the casual look of the cord, but I’d like to experiment with some cable channel painted the same color as the wall to see.
3. Nightstands could use some practical styling–A place for essentials and something easy on the eyes, too.
4. Art! To tell you the truth, After we painted and got everything in place, I wasn’t sure I wanted to hang art. And then I snapped out of it. Art is a comin’.
5. We love sleeping with the ceiling fan on in warmer months, but we’re definitely scouting a better looking one.
6. Pillows and Throws to spice up the bed a bit.
7. Not seen, but definitely needed–window treatments.

So that’s where we’re at now, which after years of just working with what we had–it feels great! We’ll keep you posted as we check more off the to-do list in here in the coming weeks. 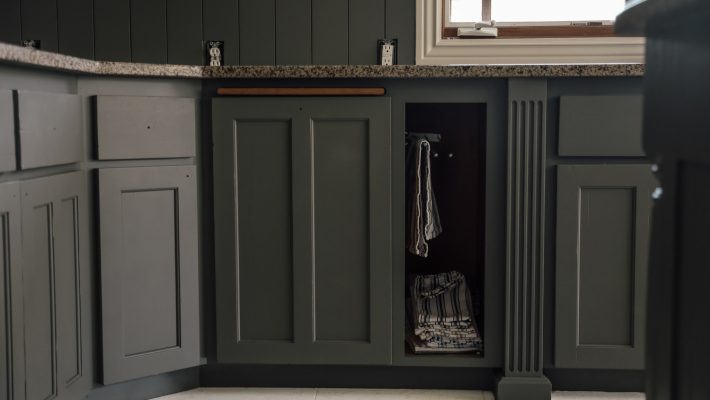 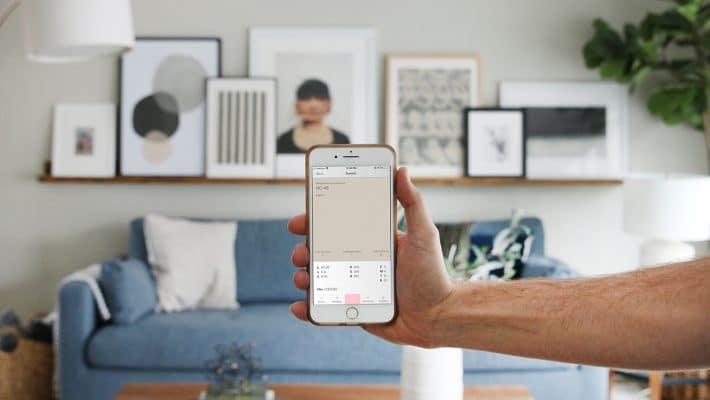