If you would have told me 6 months ago when we finished our kitchen renovation, that we’d be doing another one so soon, I might have passed out. But, the wonderful truth is that Frigidaire saw overwhelming response from us using their appliances in our kitchen, they asked us if we’d be up for designing and tackling another kitchen this year. Originally, it was going to be a set kitchen, but it started feeling impersonal and wasteful. Eventually, they asked, “Do you know anybody that needs a kitchen renovation?” Those are magical words and hard words to hear at the same time. I know, probably 300,000 people that would love a kitchen renovation–how could we choose?! I told them that I would think about it.

This was about the same time that we were gearing up to start accepting applications for our Lowe’s Spring Makeover. I had the idea to start the #CLJtotheRescue hashtag to get the word out a bit. I mostly had friends and family members find an unattractive place in their home and stand there with a sign. My sister, Victoria, lives in Pittsburgh where I was born and raised and she rallied a lot of friends and family to get on board. In my inbox popped this photo: 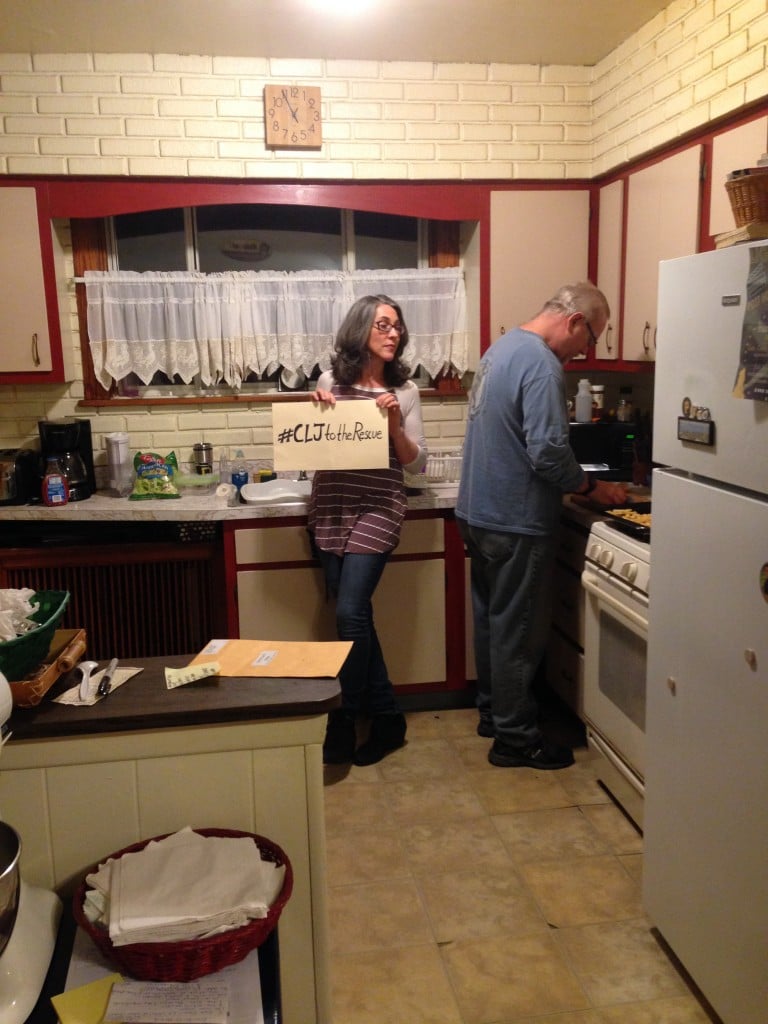 That’s my mom’s sister, my Aunt Betsy and Uncle Judd. Betsy and I have always been close because she’s the second youngest girl in their family and I’m the second youngest in mine. In fact, my mom has accidentally called me “Betsy” more times than she accidentally called me any of my own four sisters’ names. So while I was so happy to see their faces in my inbox, Was that really what their kitchen looked like?! I haven’t been back to Pittsburgh in probably a decade and I guess I didn’t remember the pink and red cabinets or the chipped linoleum flooring and was that faux brick?? (Spoiler: it is). Judd, like Chris, is the gourmet cook in their family and I started counting how many years he must have been cooking in that kitchen; I’m positive it’s more than 20.

Without telling anyone, I emailed Frigidaire a few photos I had of the space and let them know I think I found a good kitchen candidate. 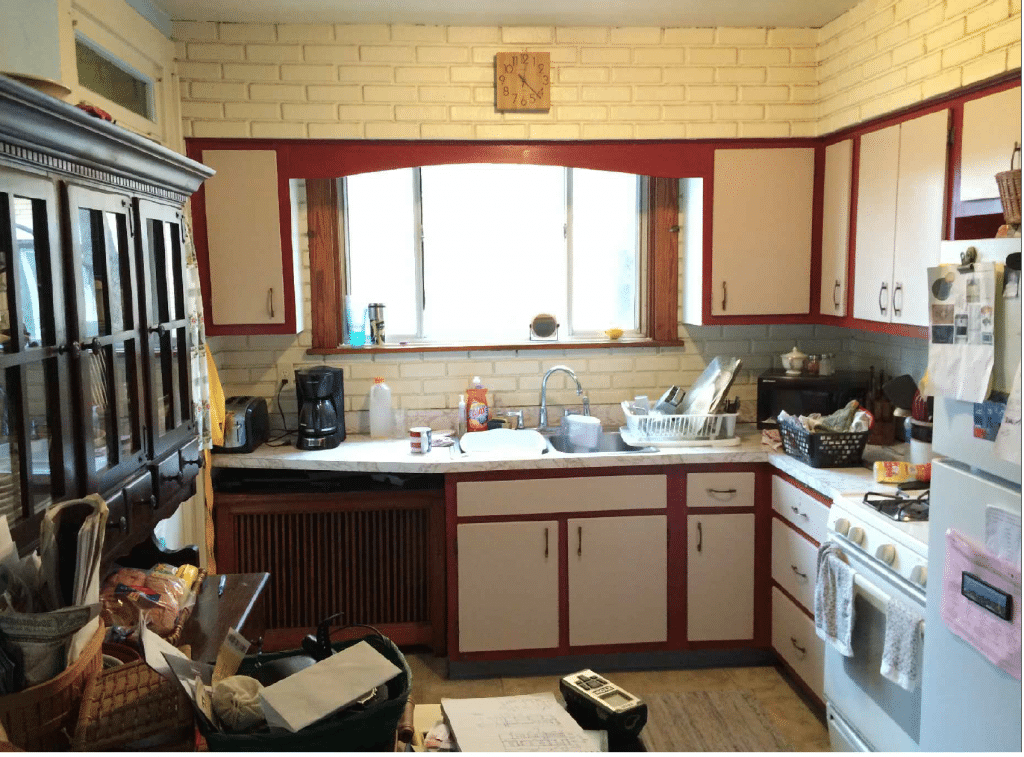 Like me, they could see the potential and the challenges. The radiator and lack of dishwasher. The slanted countertop because the back door is so close to the wall. The small 9×9 footprint. The soffit. The lack of storage. The need for storage. The faux brick. The lack of countertop space. The worn floors. The squatty cabinets. 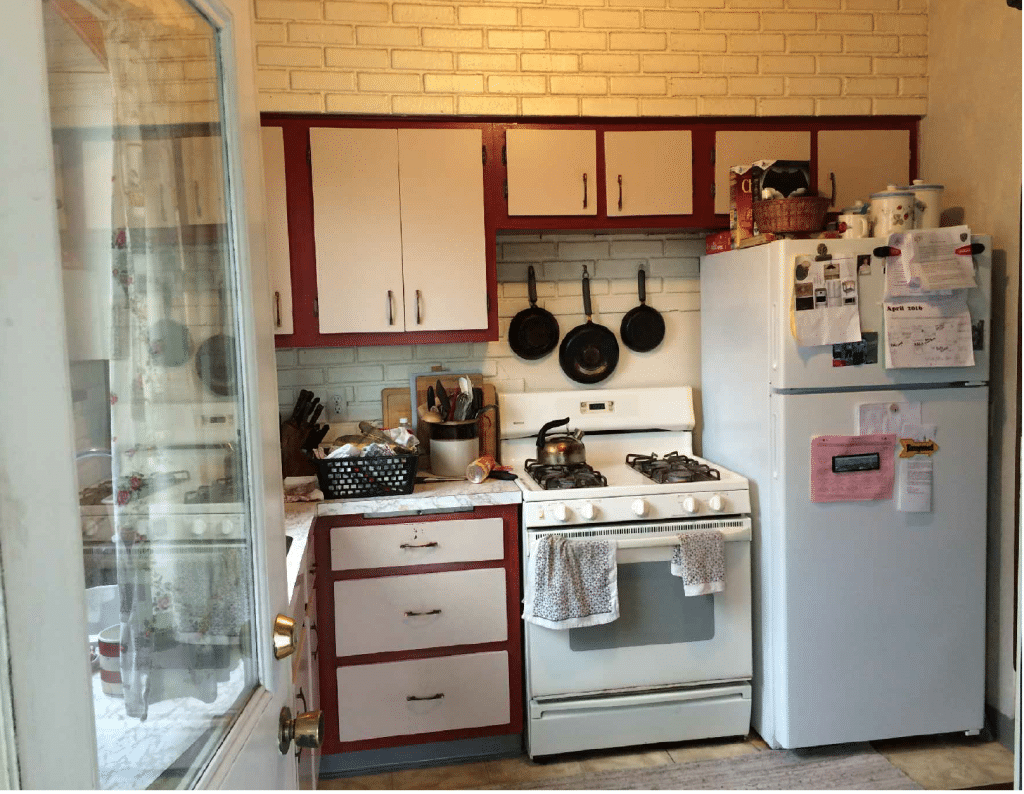 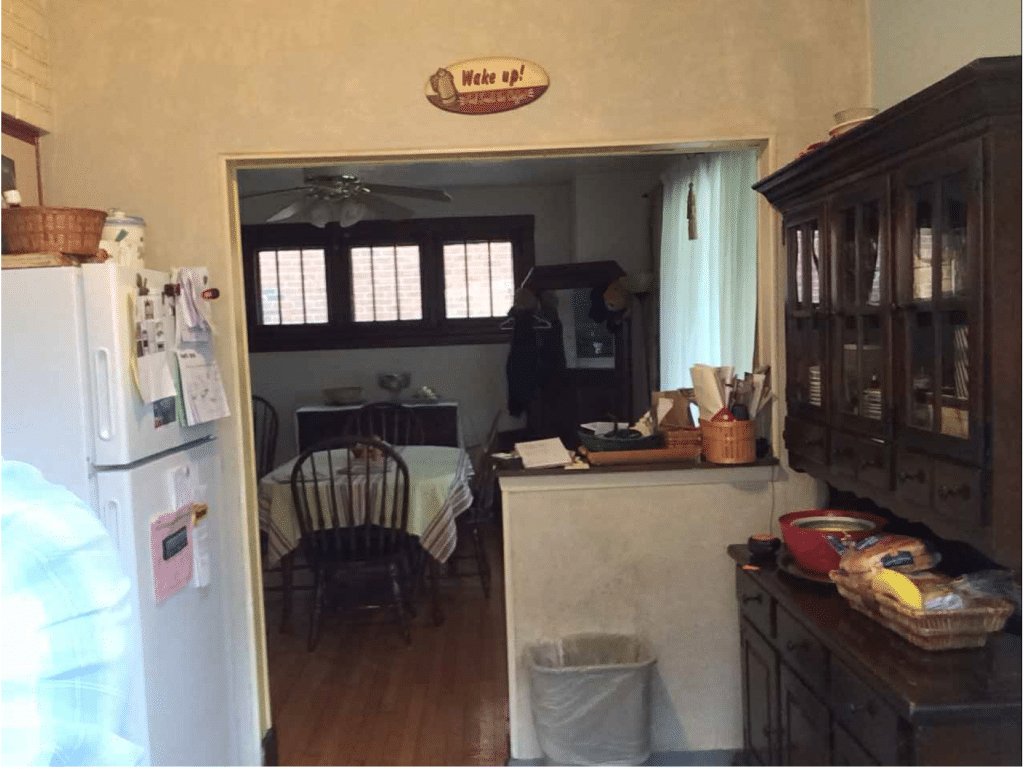 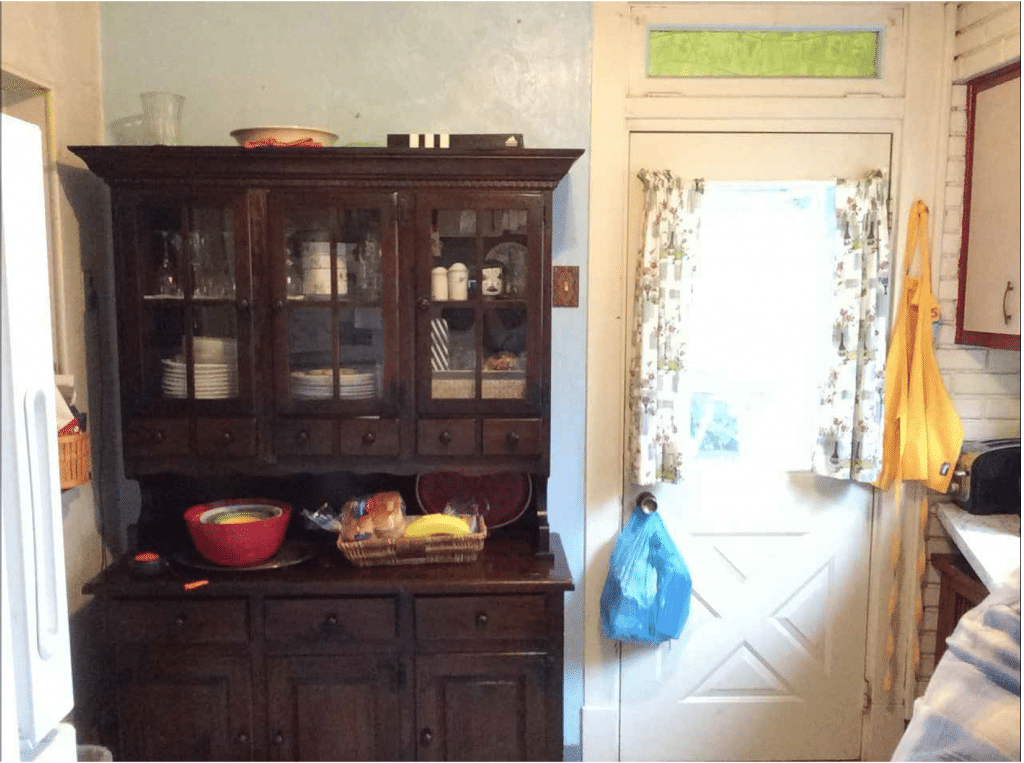 They agreed–We had found our kitchen! Right here I have to say, we’ve done projects in dozens of homes all over the country now–for people we know and otherwise, but this was the absolute best news I’ve ever had the pleasure giving. Over the past couple months, we’ve been planning and designing and brainstorming from 2000 miles away, trying to make a detailed schedule of what has to get done almost every hour of every day we’re there.

Chris and I will be renovating the kitchen ourselves from June 3-12. Nine days to do a whole kitchen can start to feel overwhelming when we stop to think about it, but we’ve also been mindful of our limits. Like, when I suggested to Chris, “Maybe we should just take down that whole wall on the right and really open it up.” To which he responded, “I’m literally begging you not to do that. Please, please, please wipe that from your mind as an option.” Hahaha! So we won’t be tearing down any full walls. However, I’m pretty confident it won’t be recognizable when we’re done with it. 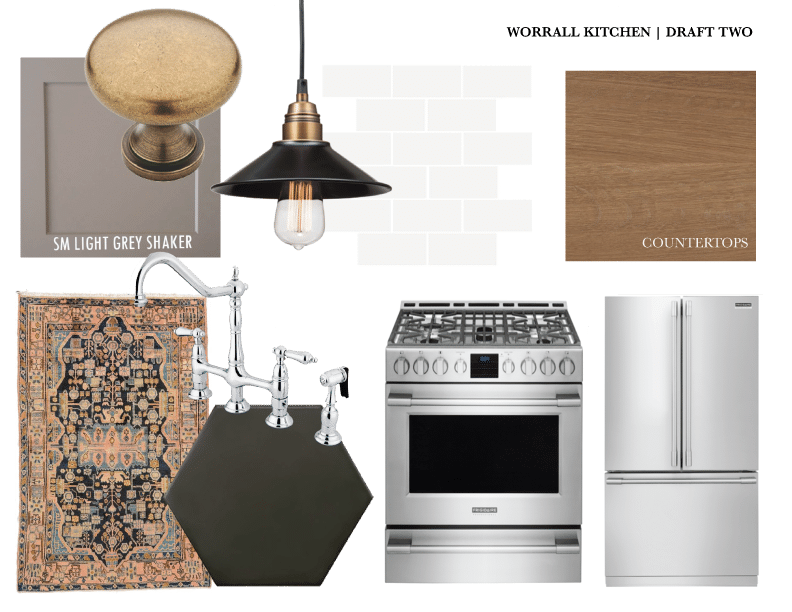 I really wanted to keep the kitchen warm, sophisticated with traditional touches.  I love the idea of large, matte hex floor tiles with warm gray cabinetry. We’ll be using Ikea cabinets with these Semi-handmade doors and these fuss-free knobs on doors and drawers alike. We’re going to install simple, smaller white subway tile and white oak countertops. All the details aren’t finalized quite yet, but I love this pendant for over the sink and this bridge faucet to keep the space from going too modern. We’ll, of course, be decking out the room in Frigidaire Professional appliances. A 30″ range (we doubled up on that one to make it look like a 60″ range in our kitchen) and we’re going to use their counter-depth french door refrigerator this time. I have to get my hands on a pretty vintage rug (the one pictured has since been sold).

Update! I’ve included the other layout option we’re considering. Let me know which you prefer! 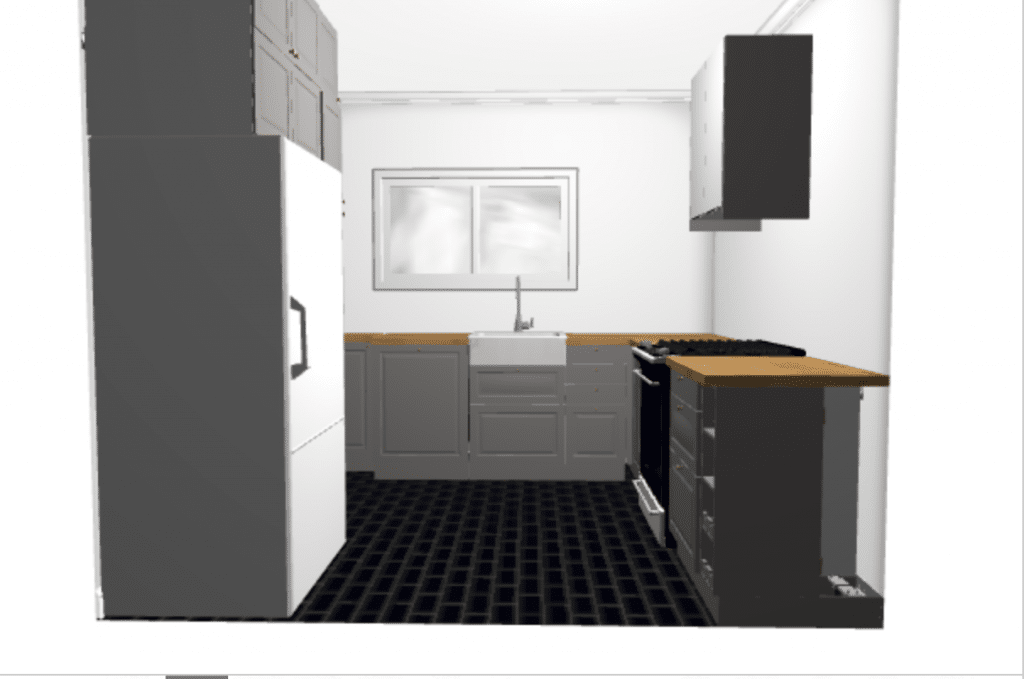 There are still a few things to figure out (and fast!) but here’s a quick digital rendering of how we solved some of the larger problems in the space. The biggest obstacle was that radiator. We’ll be removing and capping it and installing in-floor Pex heating instead. Which made room for a dishwasher! Their first ever! In the above rendering, it’s to the left of the sink with a cover panel on it–yet to be determined if that cover panel will work. 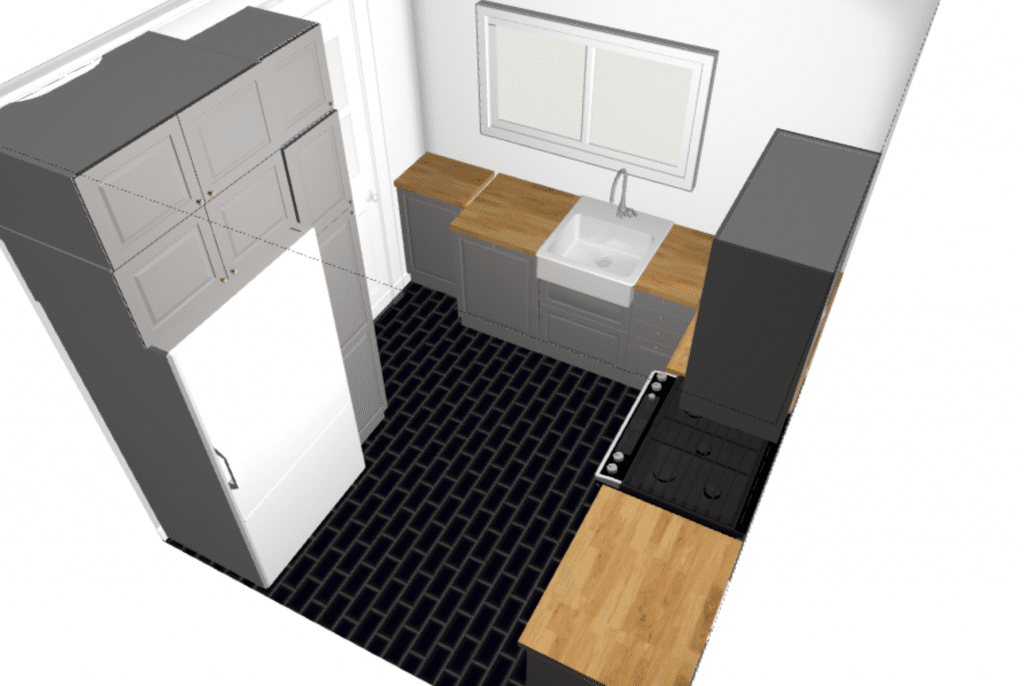 One thing that we can’t change is the placement of the door–although we’re on the hunt for an out-swinging one. We opted for a narrower 15″ depth cabinet there, and I envision a hanging herb garden above it. You might have also noticed we moved the fridge over to the opposite wall and packed it with pantry and storage cabinets galore. 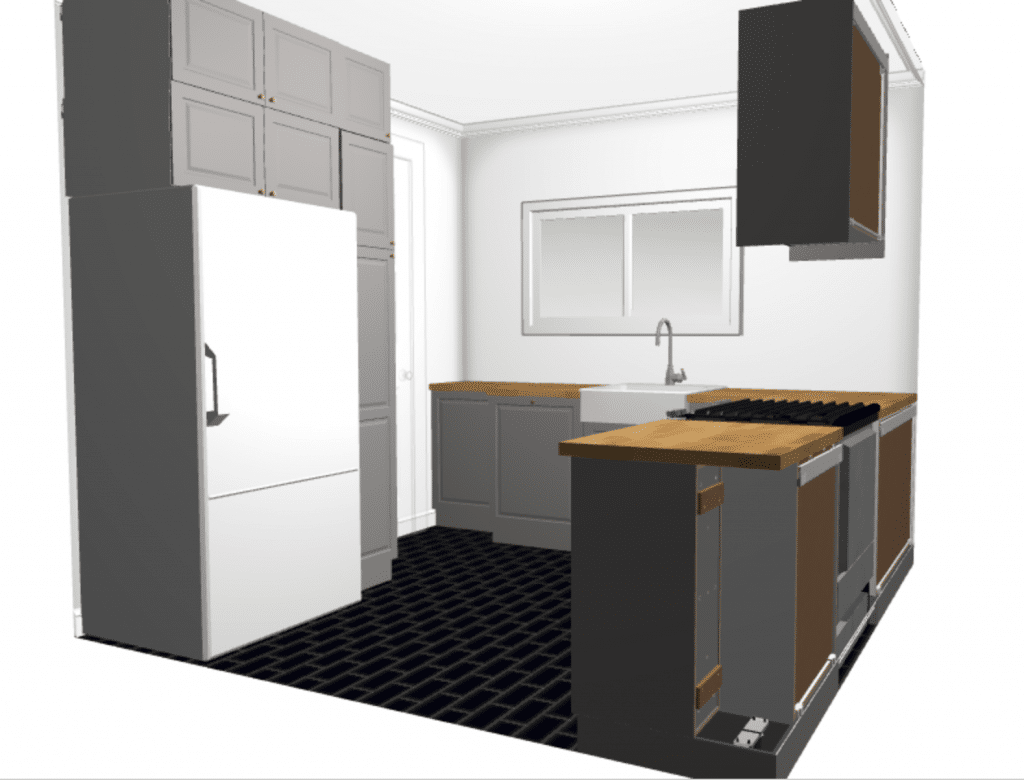 We’ve confirmed the soffits aren’t there for a reason, so we’ll be tearing them down and exposing their nearly 9′ ceilings. 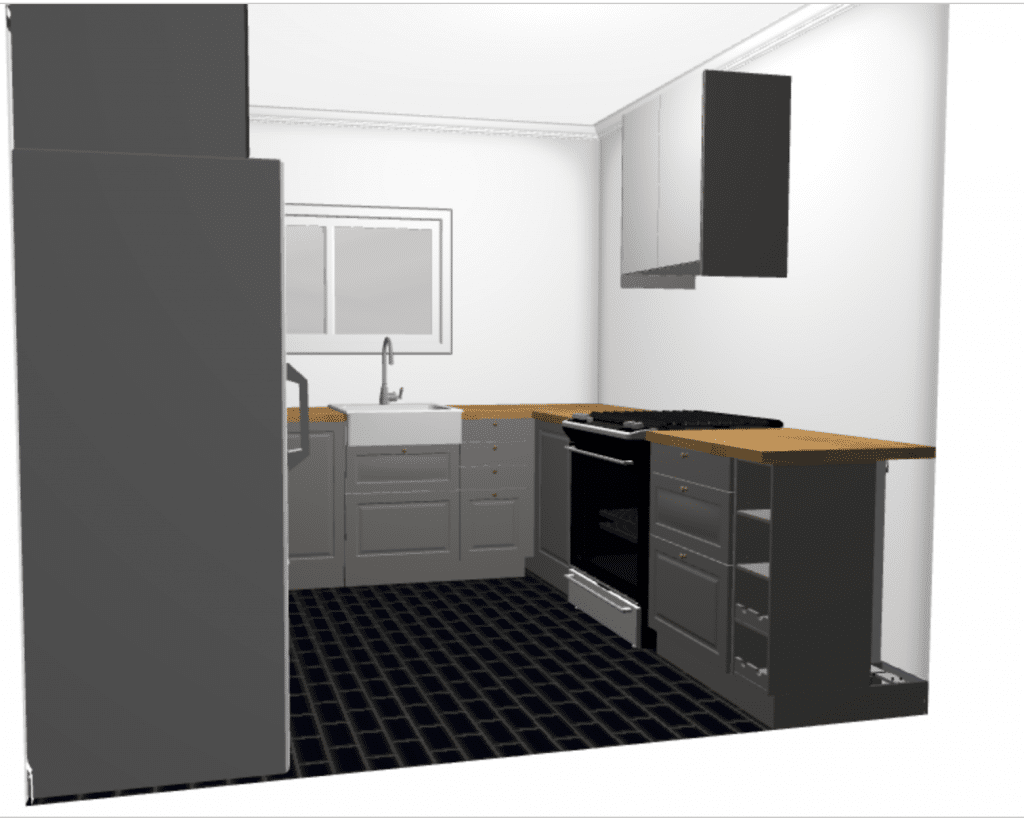 We’re still working on the range wall. Judd said he’d love more counter space, so we’re happy that we were able to add an additional 34″ of that to the right of the range. Betsy asked for some open shelving. The window is off centered, so it would make sense to carry open shelving from the range hood (which is poorly illustrated here) to that wall.

Option 2, is moving the range to the opposite wall. The downside of this option is there is only room for 12″ of countertop space on either side of the range. However, this still adds some counter space. And there’s room for open shelving next to the upper cabinetry on the fridge wall. 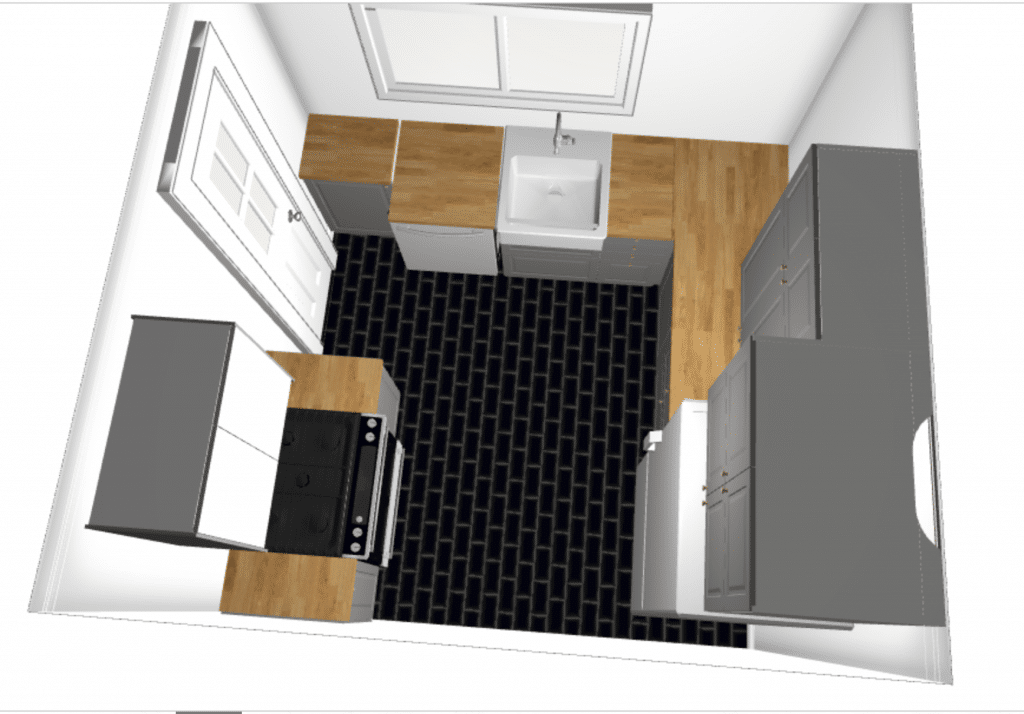 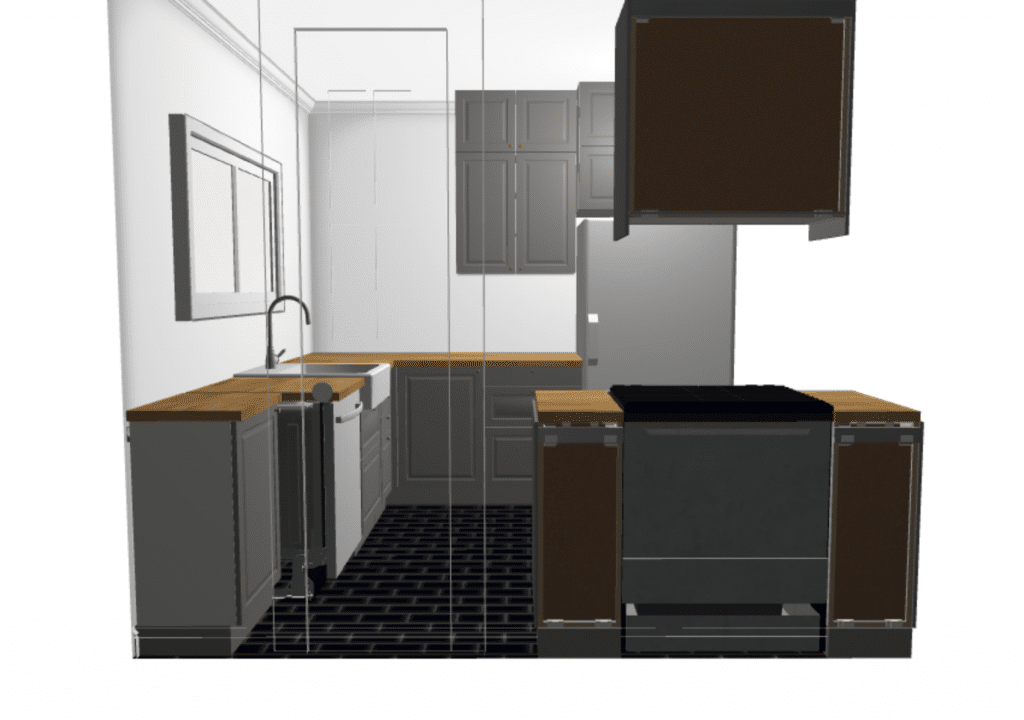 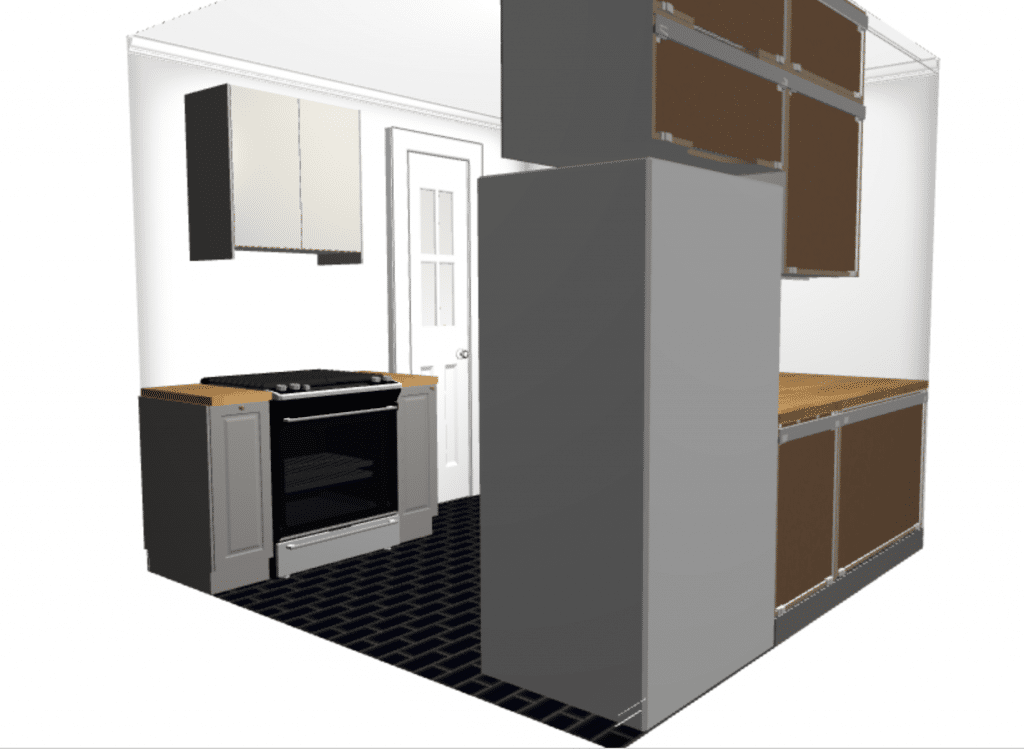 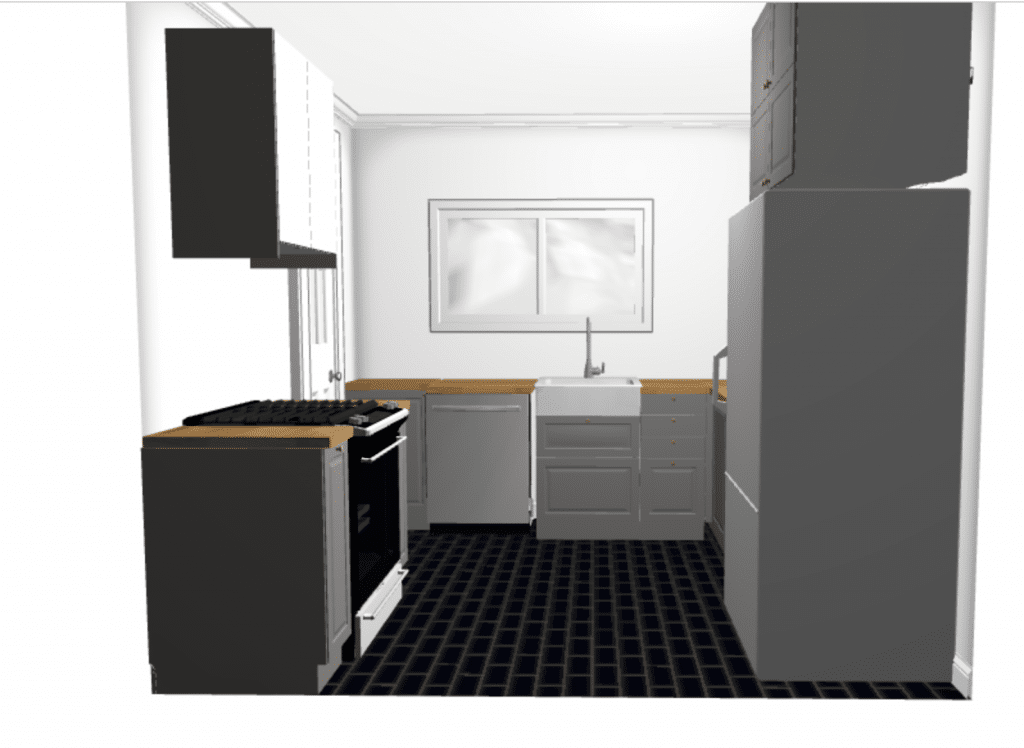 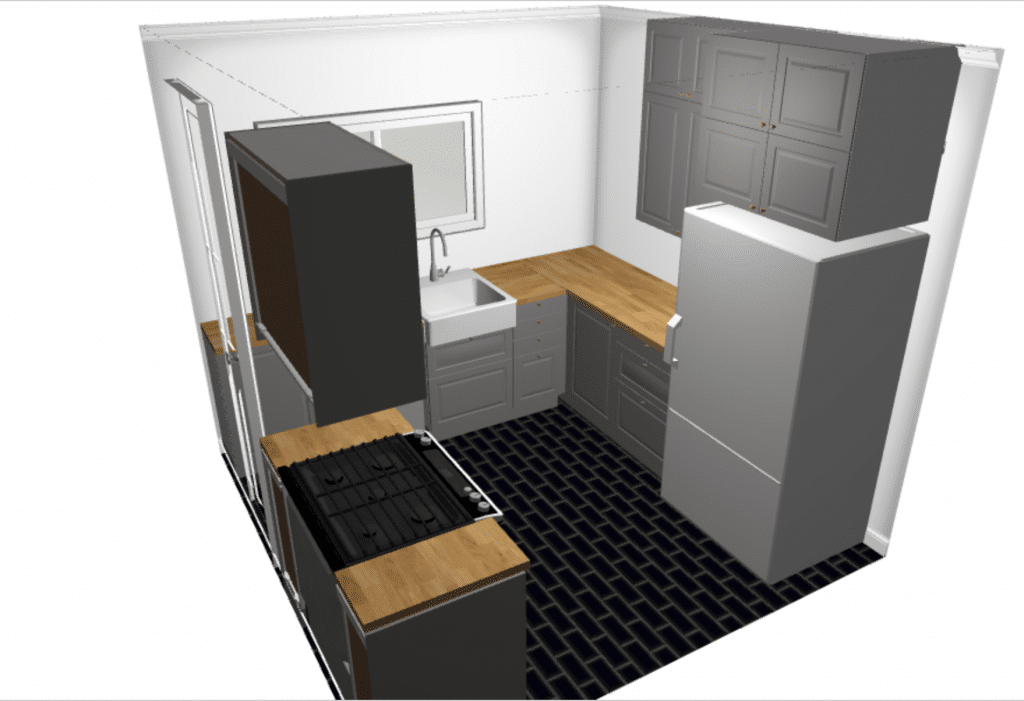 Since it is a small kitchen, I’m treading carefully not to make the whole place feel cramped and heavy. Weigh in on which option you like best. Option 1 is power packed with pantry storage and plenty of room for Betsy’s open shelving on either side of the range hood. Or option 2, with the range moved to the other side, which could feel a little lighter visually.

We have been gathering a lot of inspiration photos of beautiful kitchens, finishes and ideas on this Pinterest board we dedicated to the project. So head over there to see lots of other warm, sophisticated kitchen ideas! #CLJRescueKitchen is underway! 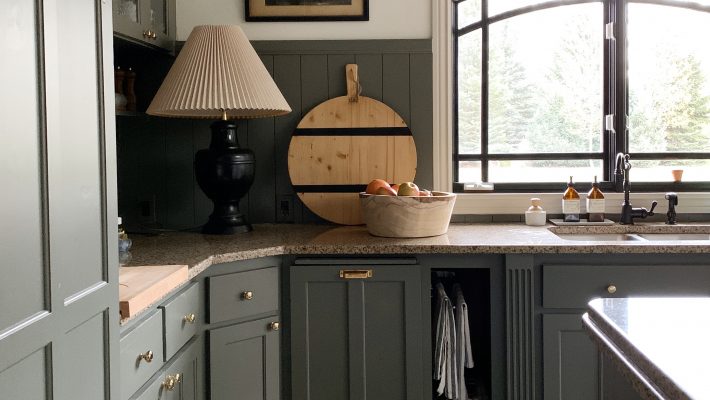 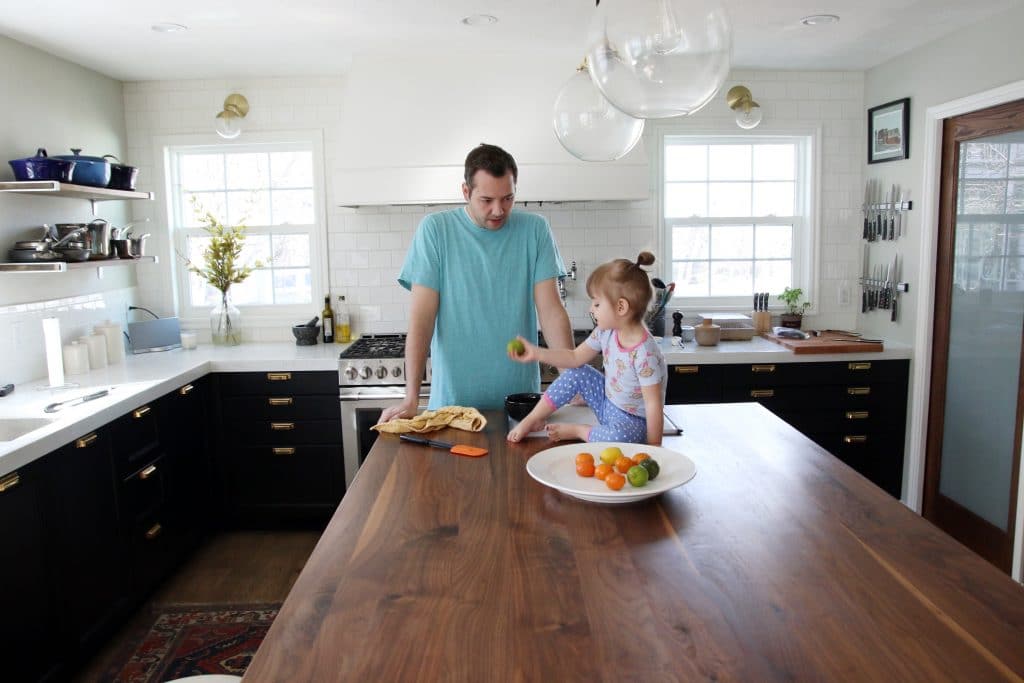 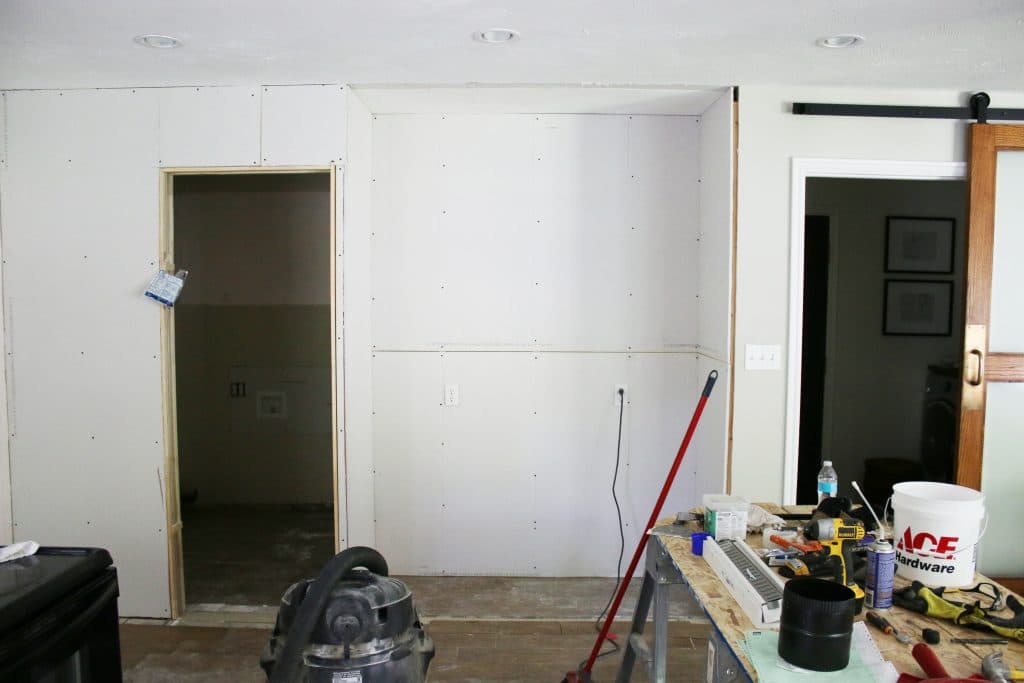