Ok, so I realize it’s Saturday and we typically don’t post on weekends, but we had a question from one of our readers that I thought required a “quick” post. Here’s the question, from Rachel:

I’ve really enjoyed the recipes you’ve shared this week and really want to make some for the big day. But here’s my question… can you help me out with a “schedule” for how you would cook these things with one oven on Thanksgiving? Are there things you cook ahead and just reheat? Or do you have an order to the dishes that you actually cook the day of? I’d love any advice. Thanks!

This is one of the biggest problems people face on Thanksgiving, and it usually ends up with dishes being served in rotation, as they come out of the oven (or some being served fresh from the oven while others have become lukewarm and mushy from being covered with foil). But it doesn’t have to be that way. It just takes a little planning and focus.

I’m going to give a full schedule of the 9 dishes I shared over the past two weeks, but you can also apply this to your own versions. Here we go. 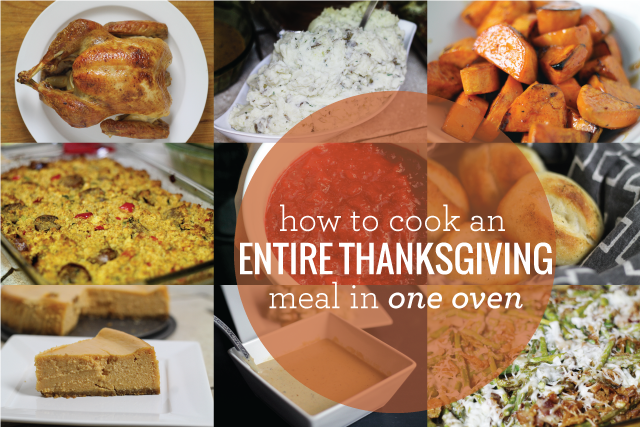 THIS ALL HAPPENS THE DAY BEFORE THANKSGIVING

• First, your prep is going to start a day early. Hopefully you’ve been thawing your turkey in the fridge for the past 2 weeks, but if not then the first thing you do the day before Thanksgiving is get your frozen turkey thawing. I know what you’re thinking- “There’s no way to thaw a turkey in a day.” Psh, I say. I’ve done it many times, twice in the last month alone. Put your turkey in a food-safe bucket or bin large enough to submerge it completely in water (still wrapped in the packaging). Put the bucket in your tub and fill it with water that is a little colder than lukewarm, but not all the way cold. Then, turn the faucet down so that there’s just a slow, steady trickle. Be sure the water coming out is a little colder than lukewarm, and check it every so often to make sure you aren’t changing temps randomly. The trickling water creates a convection environment in the water, which thaws the turkey much quicker – I did a 20 pound bird in about 12 hours.

• The next thing is to cook the cornbread for your stuffing. Bake it all, let it cool, and store it in a bowl all day, like the recipe says.

• Make your cranberry sauce. This just cooks on the stove and is super simple, but by making it now and getting it in the fridge, it can cool down and you just don’t have to worry about it anymore.

• Make the pumpkin cheesecake. This requires a long time in the oven, but thankfully the cake needs to cool down at room temp for 1-1.5 hours, THEN refrigerate overnight. So again, make it now and get it out of the way.
*note- if you’re making apple pie instead of the cheesecake, wake up early Thanksgiving morning, put the pie together, and set it in the fridge. You’ll then put it in the oven to bake as soon as you start eating dinner. This way, you have hot apple pie, fresh from the oven when you’re done.
*’nother note- I prefer pumpkin pie served at room temperature, as opposed to hot or cold. If making pumpkin pie, wake up early Thanksgiving morning, bake it first thing, and set it in a corner out of the way to cool.

• Next, put the stuffing together and put it in the fridge overnight. You won’t bake it until the next day.

• Do the same thing with the asparagus casserole. Assemble it all, get it in the baking dish, and put it in the fridge overnight to be baked the next day.

• Get your turkey in the brine. You’ll want to brine for at least 8 hours before baking, but preferably 12-14 hours (24 is the absolute limit I’d suggest). If eating at 5pm, you’ll begin brining around 10pm (the turkey is removed from the brine 5 hours before dinner).

THIS ALL HAPPENS THANKSGIVING MORNING (this schedule assumes a meal time of 5:00pm and a turkey weighing 12-14lbs. If you’re going for the gold with a 20 pounder, you’ll move each step leading to the turkey in the oven up an hour)

• 12pm: Remove the turkey from the brine and just set it in your roasting pan. Discard the brine safely.

• While the rolls are baking, finish prepping the turkey according to the recipe.

• 1pm: The rolls should come out about now. Set them aside uncovered until completely cooled, then cover lightly with brown paper bags or something. Do not put them IN the bags, just cover them loosely. If you put them in something, they may lose their crust.

• Take a break for a few minutes. Maybe go to the bathroom, drink some water, post a quick “Happy Thanksgiving everyone!” on Facebook. Whatever you want. This is YOUR time. ;)

• 1:30pm: Continue prep for the turkey by cranking the oven to 500. Follow the baking directions in the recipe.

• 2pm: Turkey should be in the oven on the bottom rack (all other racks should be removed). Once the turkey starts, you have a bit more time to relax. Enjoy your family. Or use this time to get the table set and other things in order. Because once that turkey comes out, it’s a non-stop party in the kitchen until dinner is served.

• 3:30pm: Take your casserole and stuffing out of the fridge. Finish prepping the stuffing by adding the stock.

• 3:45pm: Put the rolls into baskets for serving, and the cranberry sauce into bowls. Just get those things on the table now, so you don’t have to worry about them later.

• 4-4:30pm: The turkey should come out around here. When it’s done determines when you eat, because you’ll eat 1 hour after the turkey comes out. Let’s assume the turkey finished at 4. Leave the turkey uncovered for now.

This last hour is where it gets intense :)

• 4pm: The second the turkey comes out of the oven, move the rack from the bottom to the second notch up, and add another rack on the second notch down from the top. Immediately put the stuffing on the rack toward the top. Be quick to keep the heat in the oven. The stuffing begins cooking at 400, which is perfect because you turned the temp up to 400 on the turkey for the last little bit of roasting time, per the recipe.

• 4pm: Put a pot of water on the stove on high heat for the mashed potatoes. To ensure the water boils in time, use warm-hot water from the tap and cover the pot with a lid while it’s on the heat.

• 4:10pm: Turn the oven down to 375 and immediately add your asparagus casserole to the same rack the stuffing is on. I realize the recipes say to cook at 350, but that’s assuming they’re cooking by themselves. As you add more stuff to the oven, you need to adjust temperatures. Plus, we’re going to be adding sweet potatoes into the mix and will need extra heat to make up the difference. Also, Try not to let the pans touch, as this can create hot spots and burn little parts of the stuffing and casserole.

• 4:10pm: Cut and prep your sweet potatoes. Get them into the ziplock bag with the oil and seasonings as quick as you can, while still practicing proper knife safety. :) Set that aside.

• 4:20pm: Wash and cut the regular potatoes for the mash. This should not take any longer than 10 minutes.

• 4:30pm: Put the regular potatoes into the boiling water and cover with the lid.

• 4:32pm: Turn the heat in the oven up to 425. Move the stuffing and casserole to the rack toward the bottom, and the pan you’ve been preheating for your sweet potatoes to the rack toward the top. Add the sweet potatoes to the pan. I realize the recipe for the sweet potatoes says to cook them at 450, but because we preheated on the bottom, close to the heating element, the pan will be extra hot. And since the potatoes will be cooking higher up, closer to the roof of the oven, they will absorb and block that extra heat which will cook them perfectly, while protecting the stuffing and casserole below from the temperature which is now 75 degrees hotter than what their recipes call for. Follow the rest of the recipe for the sweet potatoes.

• 4:33pm: Make the maple bacon vinaigrette for the sweet potatoes.

• 4:40pm: Toss the sweet potatoes in the oven by gently shaking the pan.

• 4:45pm: Check the sweet potatoes. If they don’t have dark spots, turn the broiler on high for a couple minutes. Keep a very close eye on them.

• 4:47pm: Sweet potatoes should be done. Remove them from the oven and turn the temperature to 450. Move the rack toward the top to the center, and place the stuffing and casserole on the center rack. Remove the foil from the casserole and top with fried onions and grated cheese. The timing and temperature for this is different than the recipes say, but it’s ok.

• 4:47pm: The regular potatoes should be done. Drain the water from the pot and add the stick of butter, then put the lid back on, per the recipe.

• 4:49pm: Move the turkey to a carving board and ask someone else to begin carving it. Or, if you’re going to carve table side, just put the turkey on the serving tray.

• 4:50pm: Toss the sweet potatoes in their vinaigrette, put them in their serving dish and cover with foil.

• 4:56pm: Finish making the mashed potatoes and put them in a serving dish.

• 5:00pm: Remove both the stuffing and asparagus casserole from the oven. And since I think that’s the last step, DINNER IS SERVED!

You’ll notice that the last hour is crazy. Like, super crazy. But you can do it, I promise. And it’s not like you have to do it by yourself, right? Get your guests involved and ask for their help. Make a plan and study it in advance, provide direction, and try not to look frantic. If you look frantic, everyone will feel obligated to come into your space and ask how they can help, but really they’ll just be getting in the way. Smile, ask for help when you need it, and don’t be afraid to boot people out who are throwing off your groove. If they really want an assignment, have them take out garbage or give them dirty pans and send them to another room that has a sink where they can wash them.

So there you have it. We’ll call this the 10th post I promised in the beginning but never delivered. Hopefully it helps someone and even if you aren’t making my entire menu, it can still provide an outline for how to get things done with yours, even with one oven. Cheers all. :)

Art For A Nursery or Child’s Room » 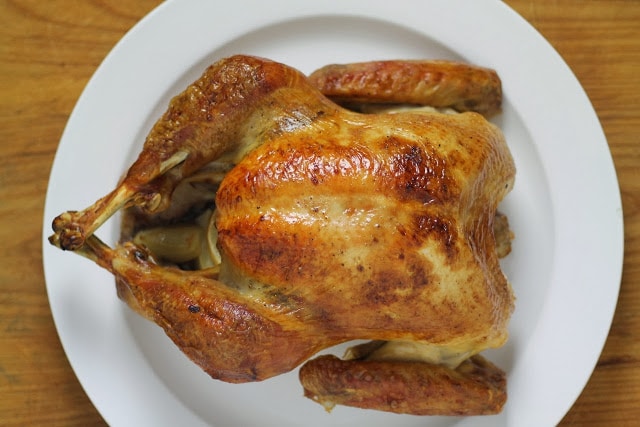 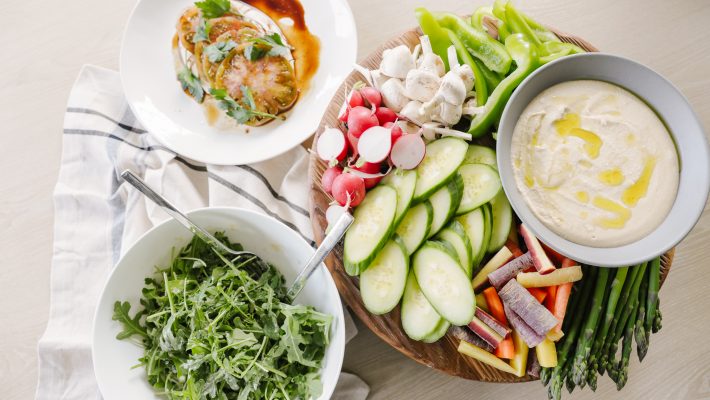