How We Made Our Hidden Door in the Bonus Room

When Jules gets an idea in her head, it’s not a matter of “if” so much as “when”. So when she brought up the idea of making the extra door in our family room, that leads into the playroom, hidden, I knew I had to figure a way to make it happen. Though this was my first time building a hidden door and I was a little nervous, she was right – it made such a difference in the space. Plus, once I really got going this project quickly became one of my all-time favorites. 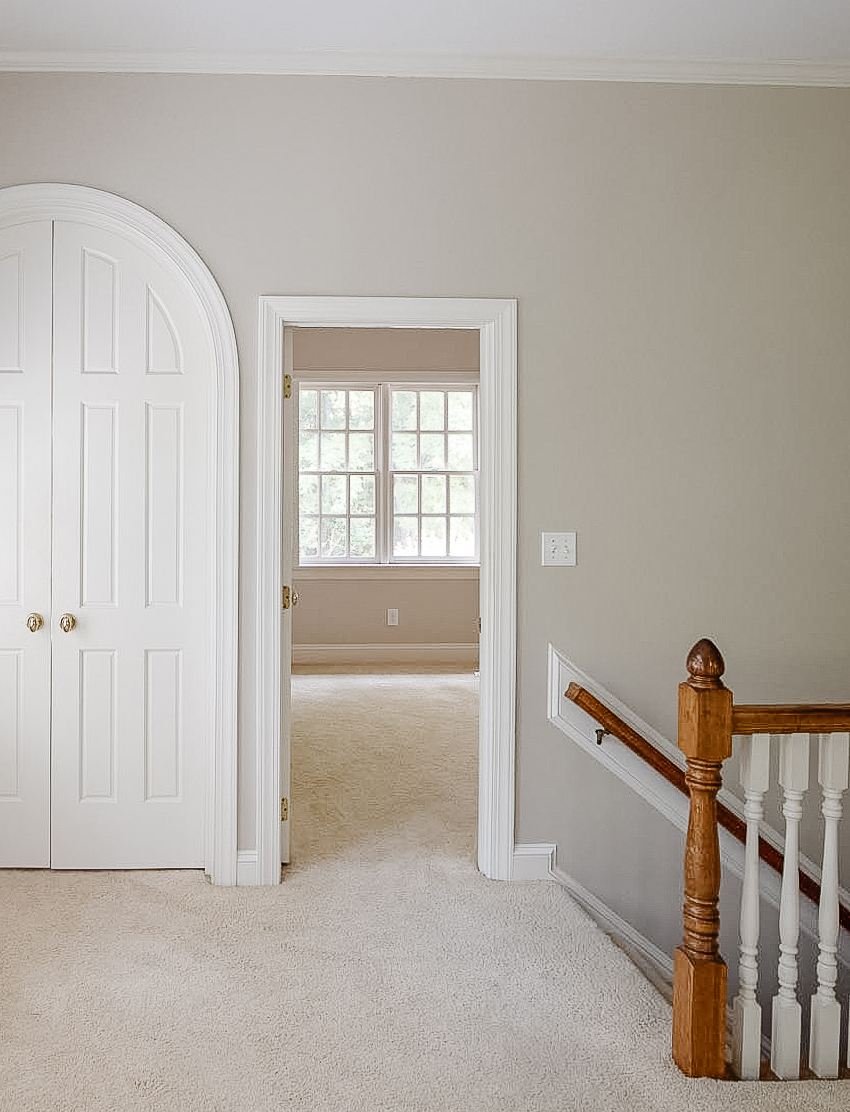 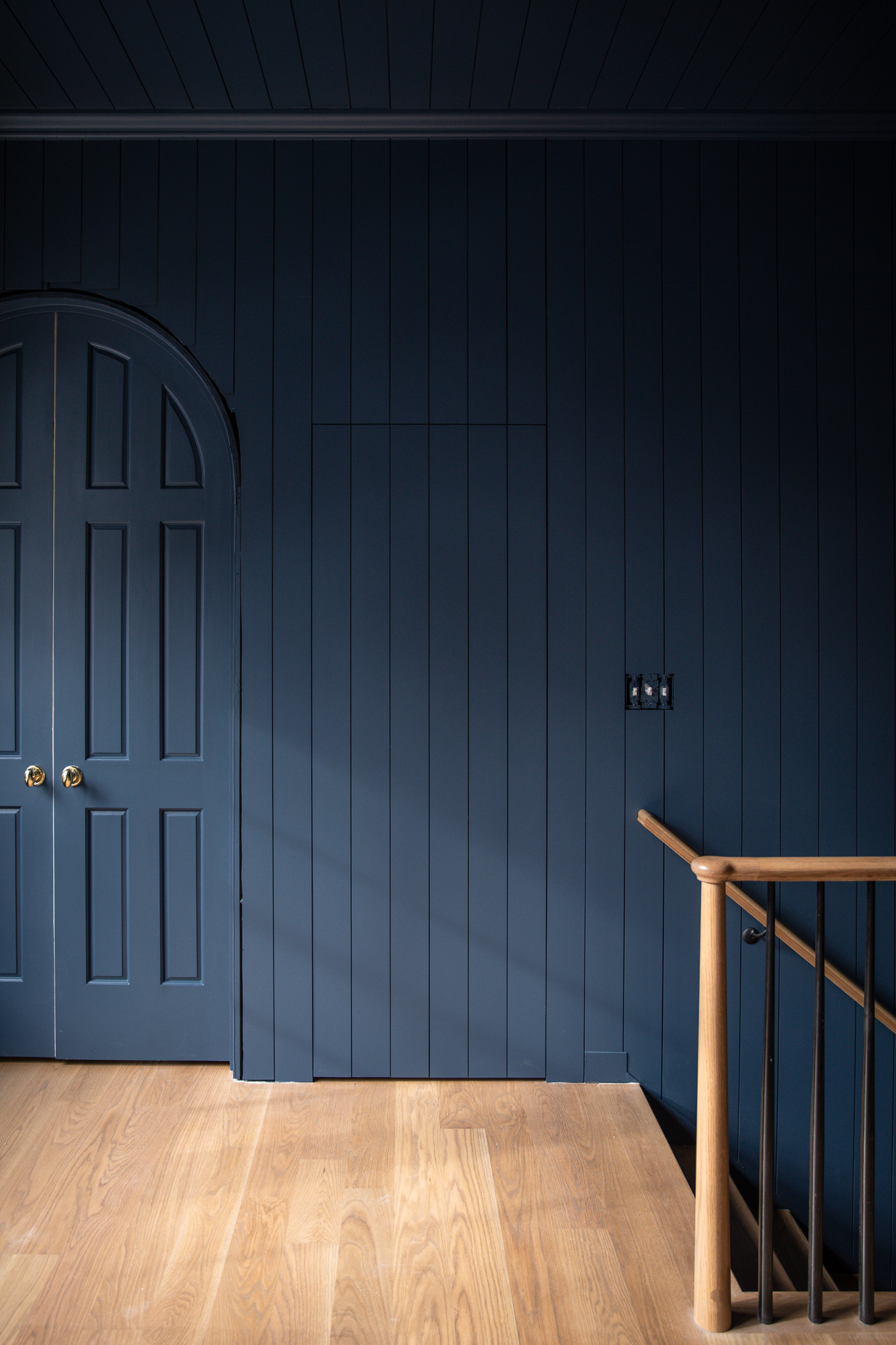 The trim around arched doorway, as well as baseboards and the switch plate cover are next, I promise.

Of course every situation is unique, but following are the steps that I took to build and install this hidden door (otherwise known as a jib door), with the paneling. If you’re looking to install a hidden door, definitely adjust as needed!

Frame the doorway and build your jamb
I knew the best way to hide the door would be to get the seams to line up with the vertical paneling we were already adding to the space. This made the door slightly smaller than what was currently there, but only by a couple of inches. I removed the old door and jamb, then put the edge panel pieces in place as my guide. Once I had those, I could then build the new jamb out of primed pine. I had to plane the new pieces down to about 3/8 thickness, then shim every few inches to keep it level and sturdy. 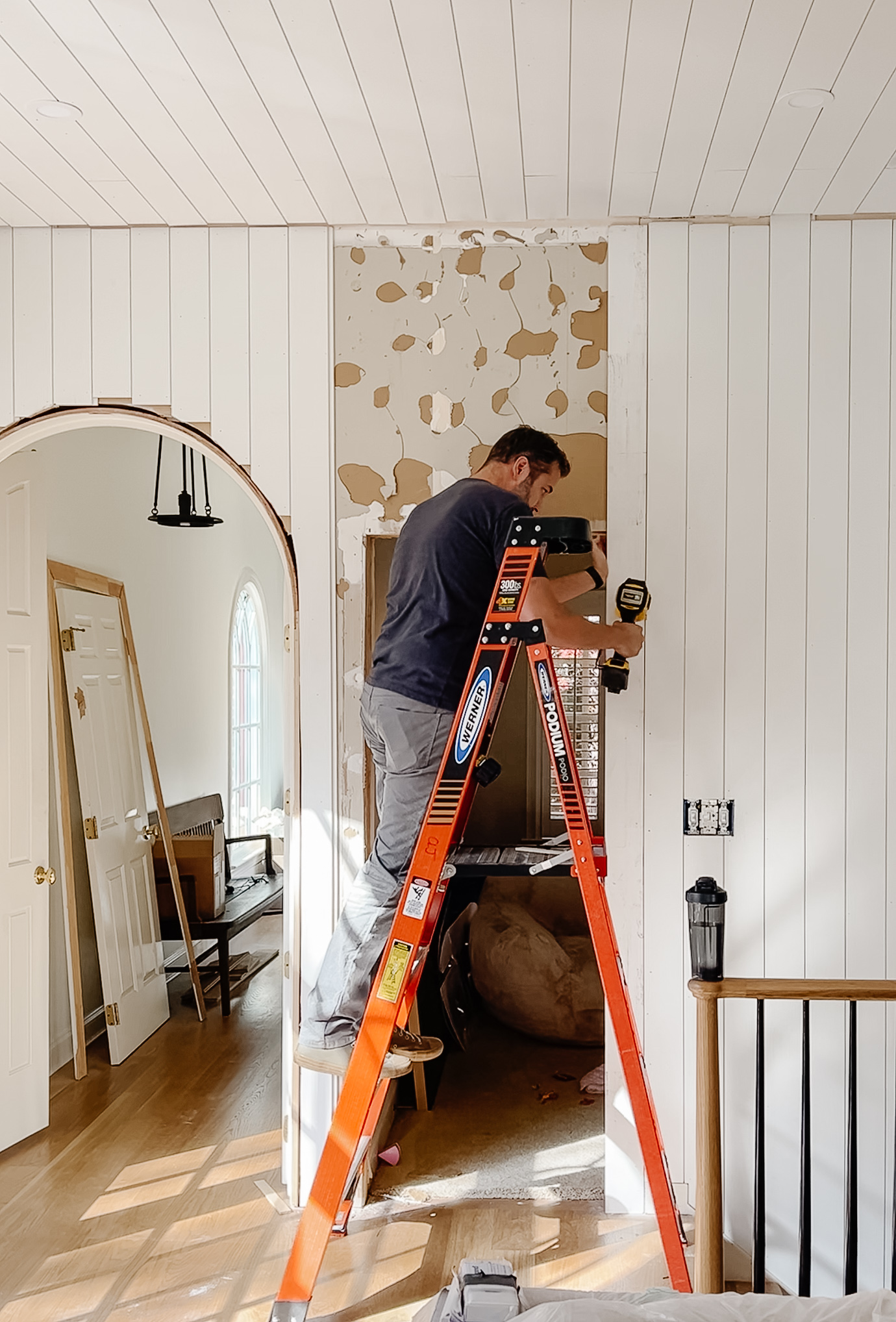 When creating the new jamb, I made sure to factor in a 1 inch overhang on the handle side to act as a stop for the door. 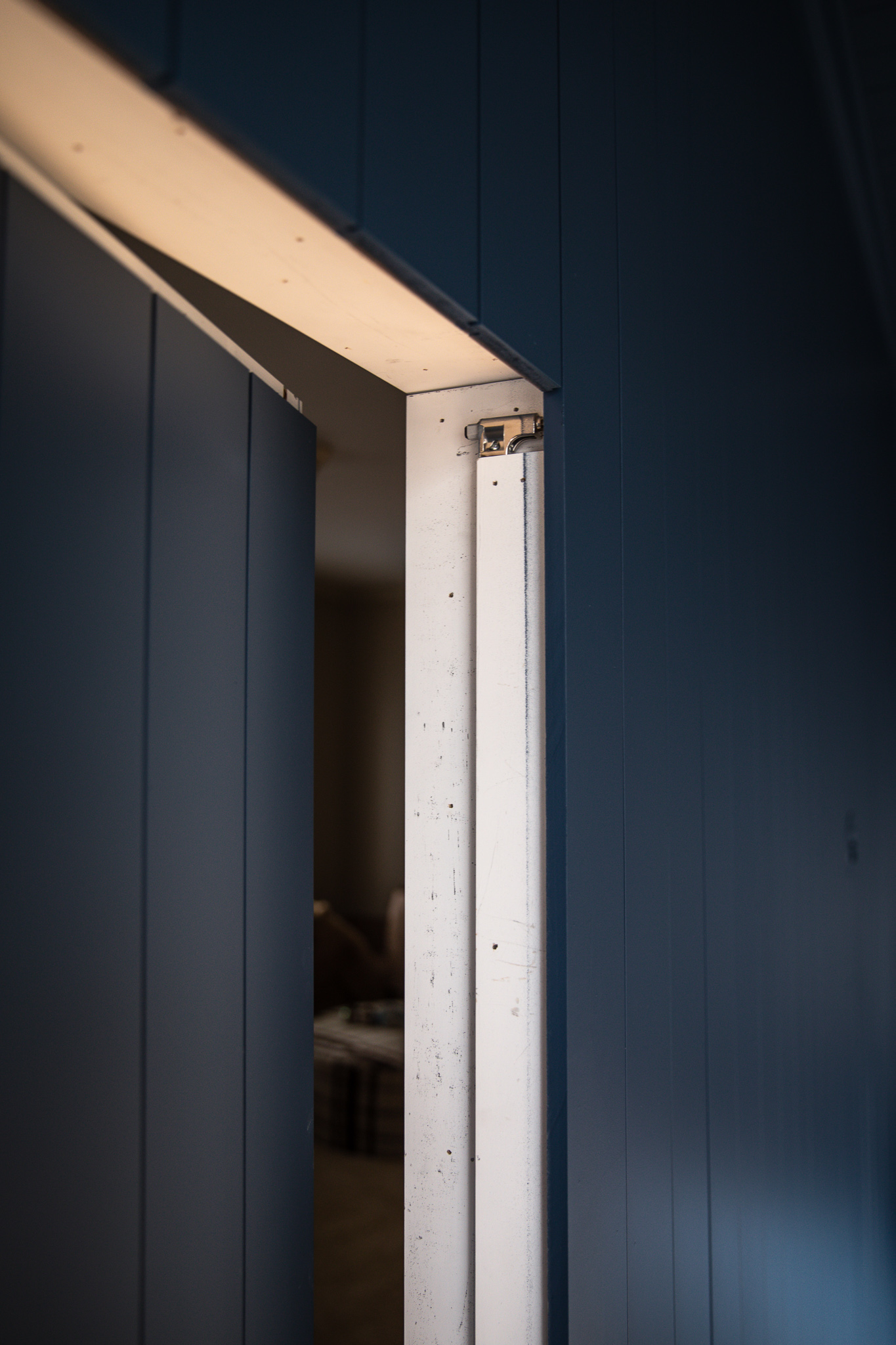 Build the door
Where this door was leading into a kid’s play area, I knew I didn’t want it to be super heavy. So I decided to use 1in thick primed project boards for the perimeter, and square aluminum tubing inside of that to create a rigid structure that was light weight. I used 90 degree brackets in the corner and self-tapping metal screws to connect everything together, then drilled holes through the aluminum with a metal bit so I could screw the inner metal frame to the outer wooden frame. 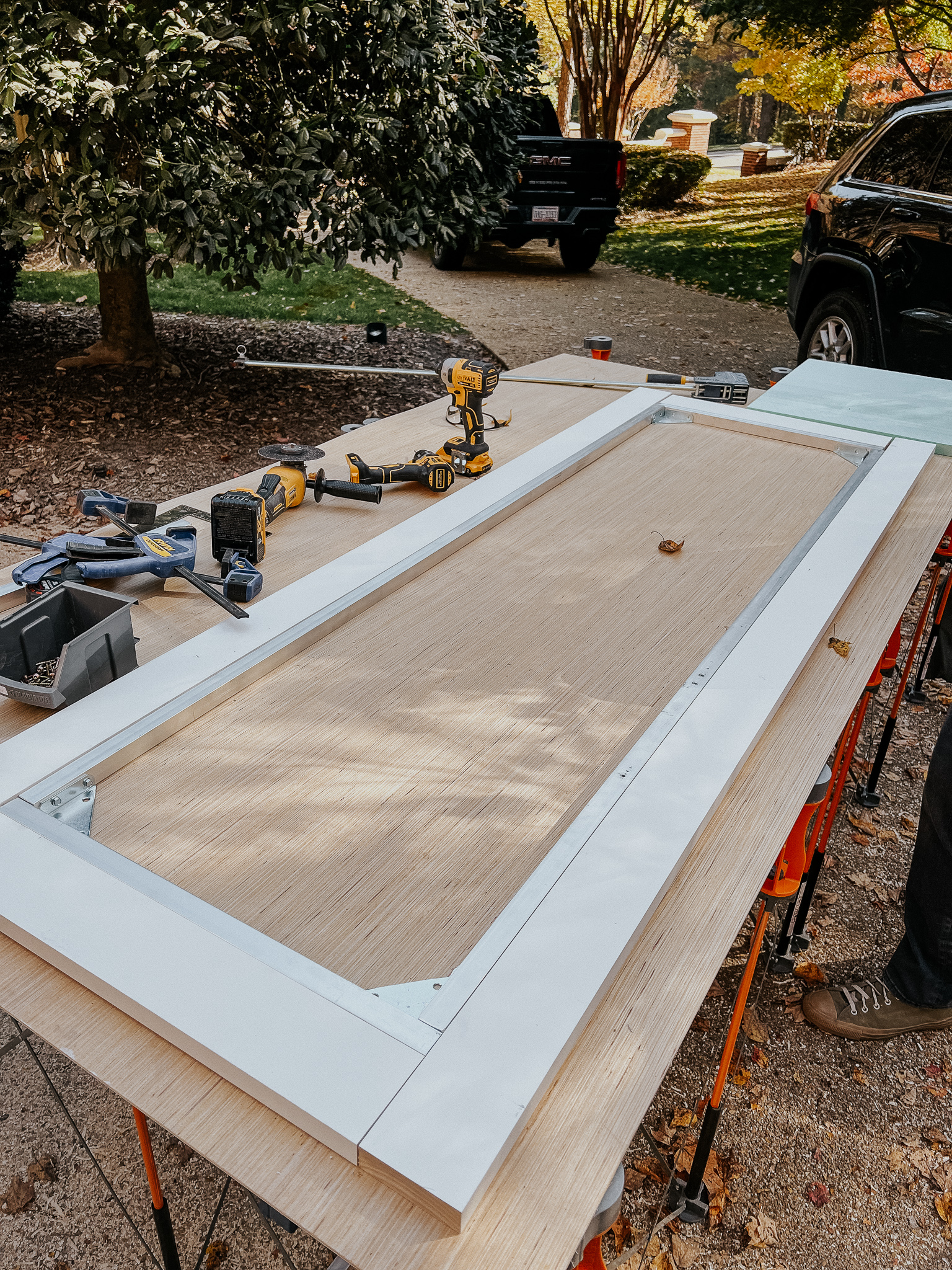 The aluminum tubing was also crucial to keeping my door level and preventing warping, since I was building the door on an uneven surface. I used cabinet clamps to make sure all of my seams were tight. 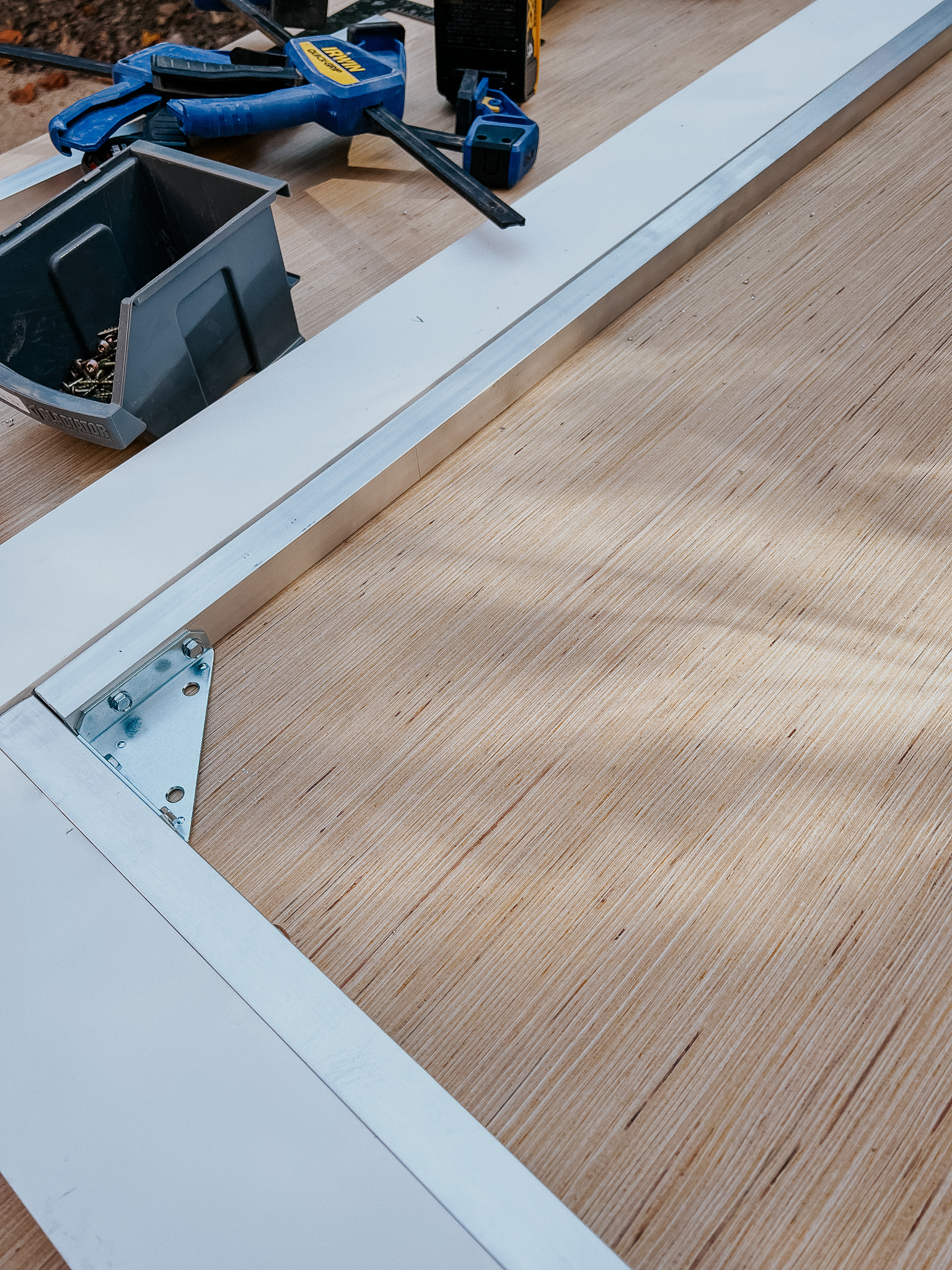 To keep the door from feeling hollow, I added inch thick foam insulation in the center using liquid nails, along with more of the inch thick, 2 1/2″ wide project boards as nailers. 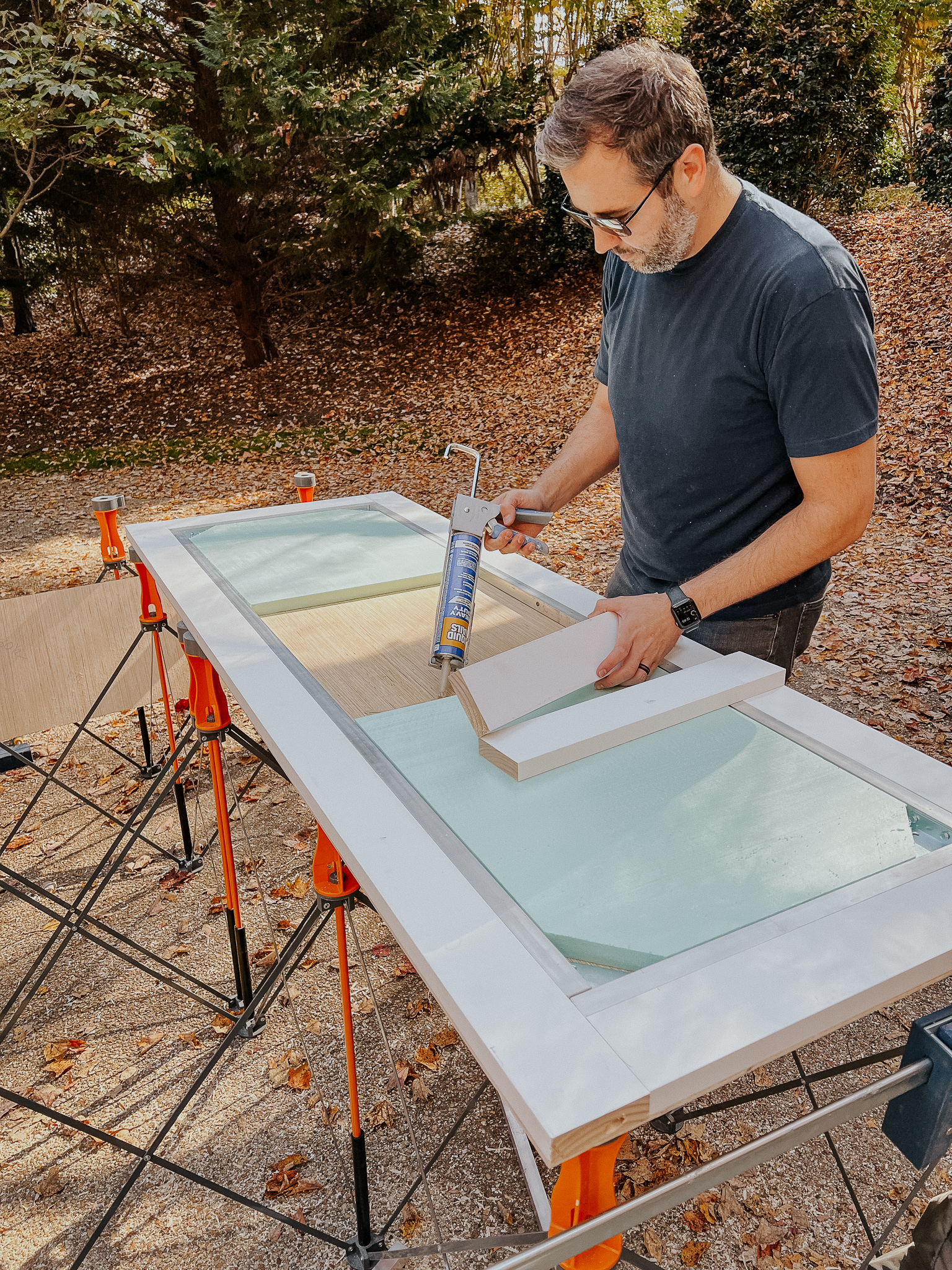 The frame was sandwiched between two panels of 1/4″ plywood to reach a standard 1.5in thickness.

Hang the door
I used a router to route out the hinge locations on the door, so that the hinges sit flush. We used self-close hinges so that the door will close on its own without having to use a knob on the outside, maintaining the hidden look. 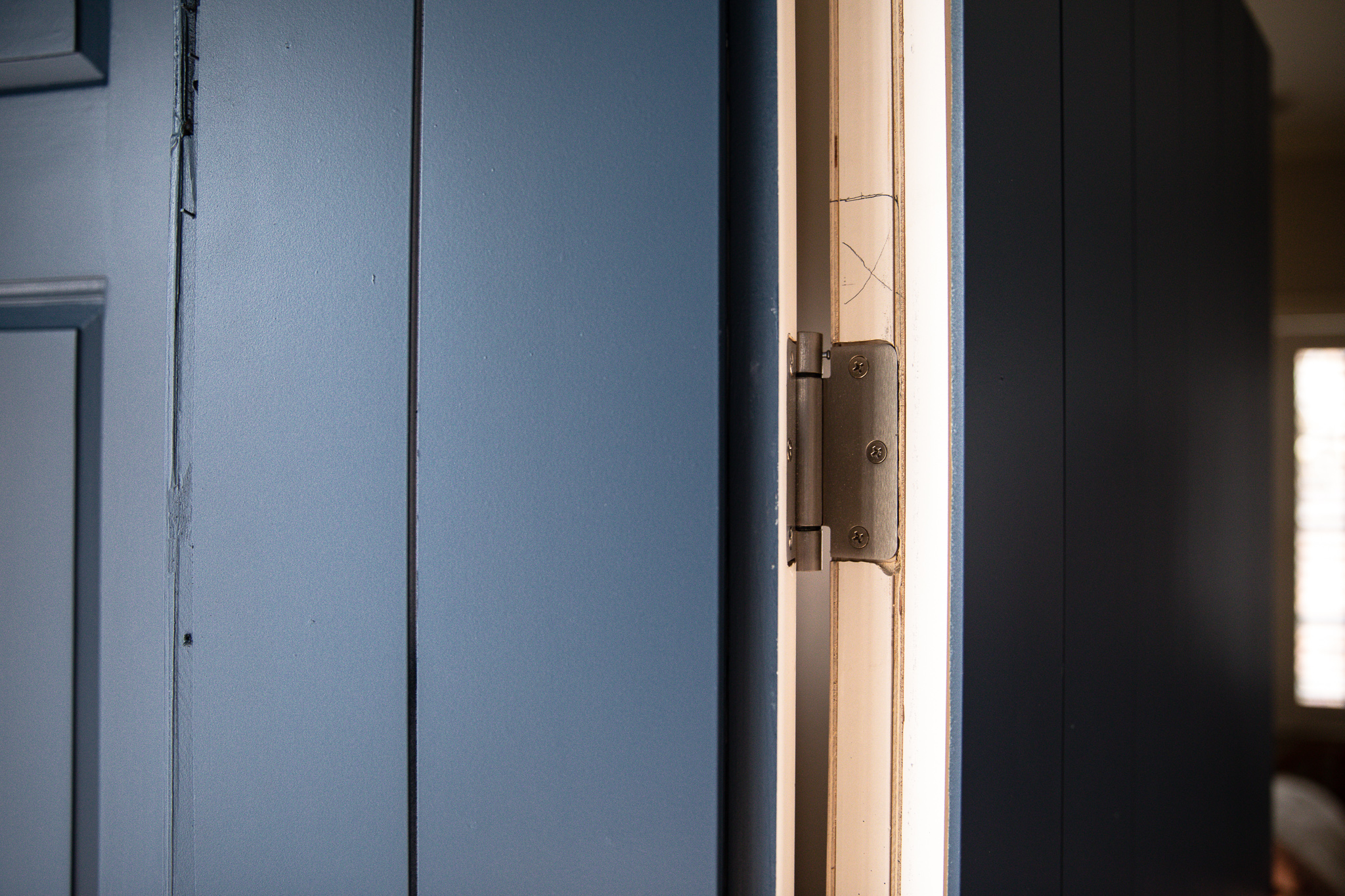 I set the door in place using shims to hold it up, then I marked the hinge locations on the door frame and routed those out as well. Once that was done I could hang the door. 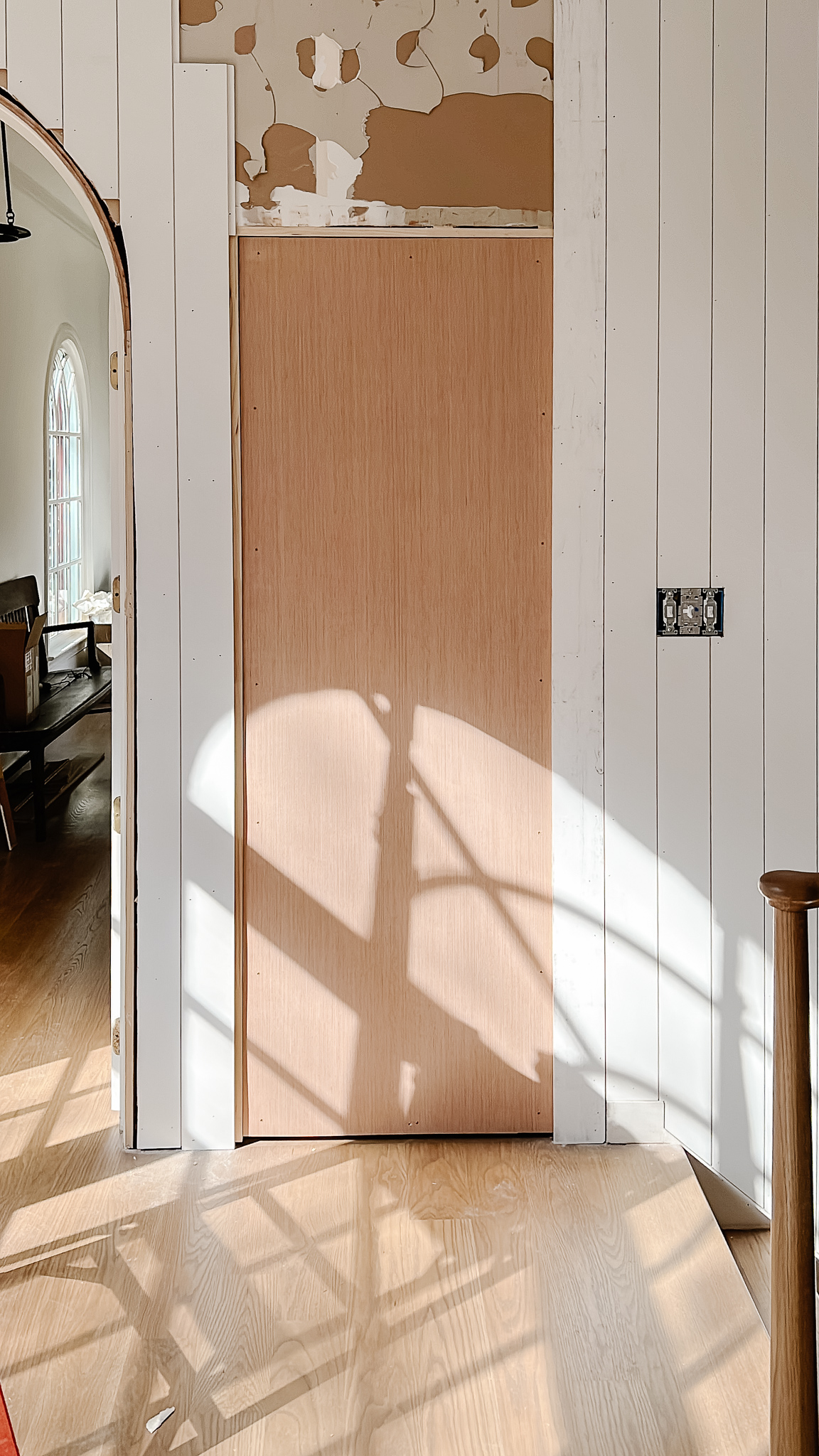 Add the paneling to the wall and door
With the door in place I could now tell exactly where it stopped, how it swung, and I could add all the paneling to truly make it hidden. I extended the thickness of the front of the door so that when I added the paneling, it would be flush with the paneling on the wall. I did this using some wood I planed to get the right thickness, and thinner sheets of foam insulation. (I braced the door from behind so that it wouldn’t move while I worked on it). 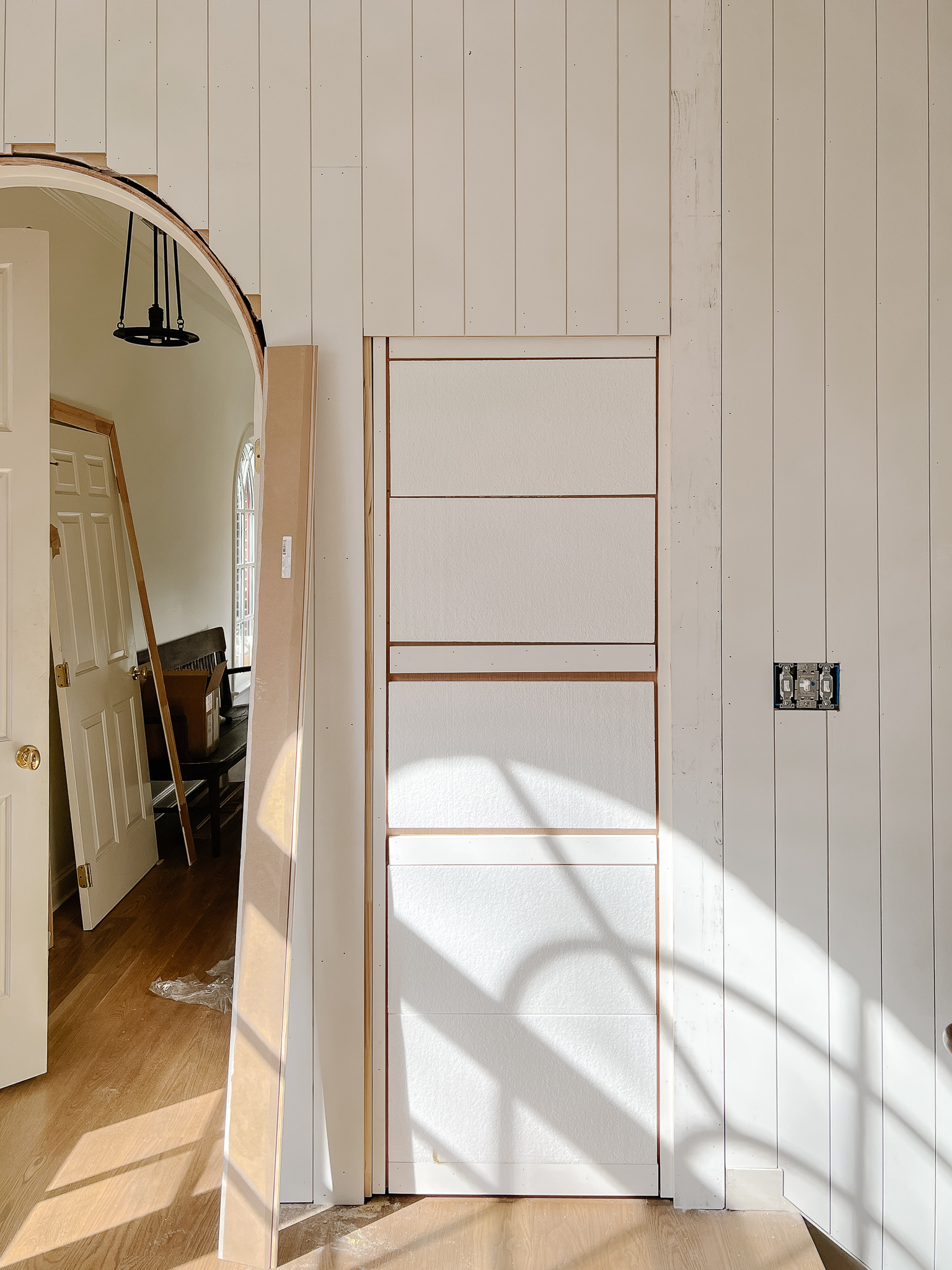 I added the paneling to the wall above the door, then continued onto the door one piece at a time. I used a 1/8″ tile spacer at the top and sides of the door to match the 1/8″ spacing between the paneling. Each board was glued and nailed in place to prevent any vibration or loosening over time. 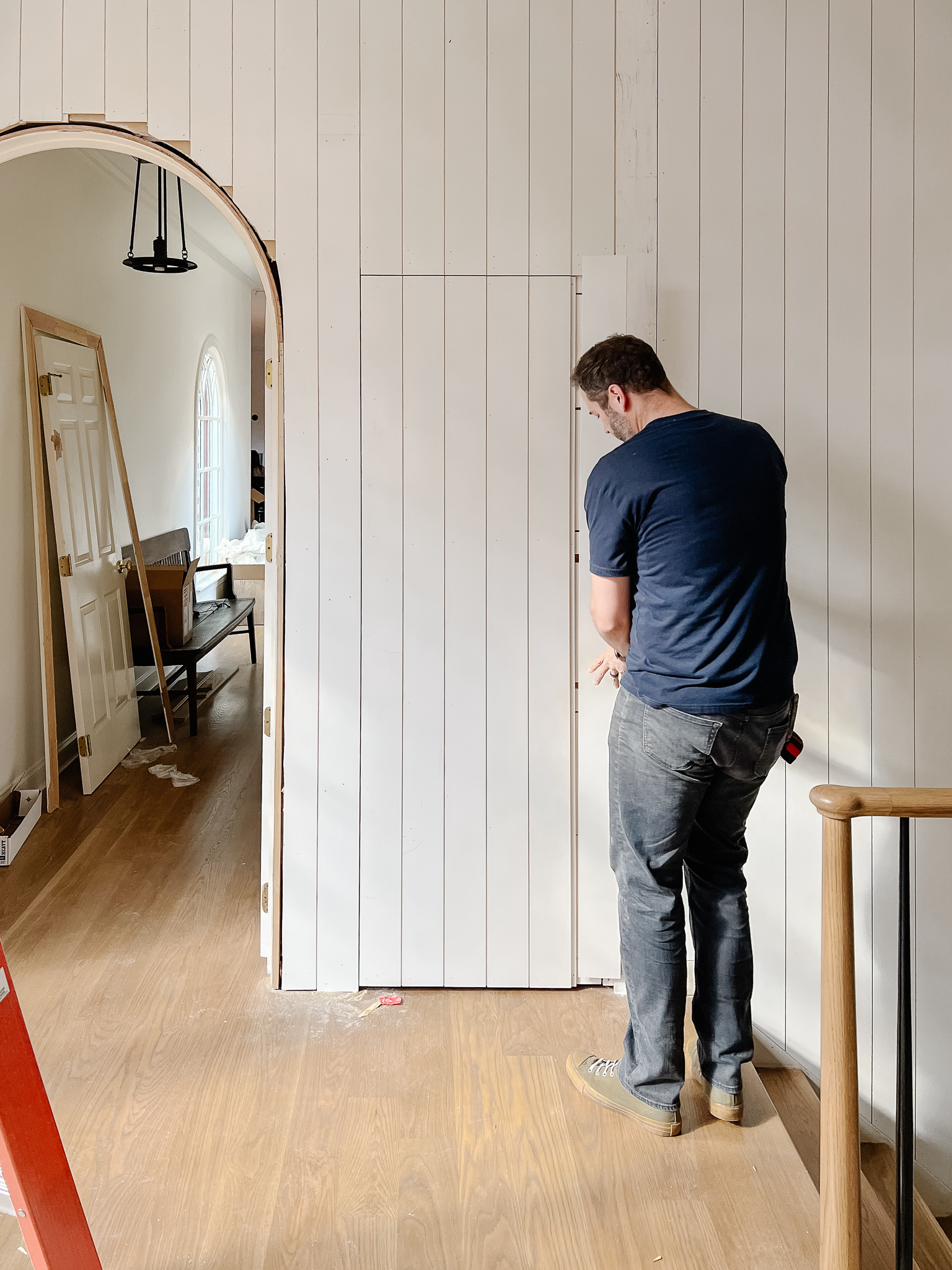 I’ve found that, even with the self-closing hinges, sometimes the door will still sit open a crack so I ordered some magnets that I will set into the door and frame to hold it closed and flush with the wall. But even without that, with the room painted, the door just disappears. How satisfying is that?? 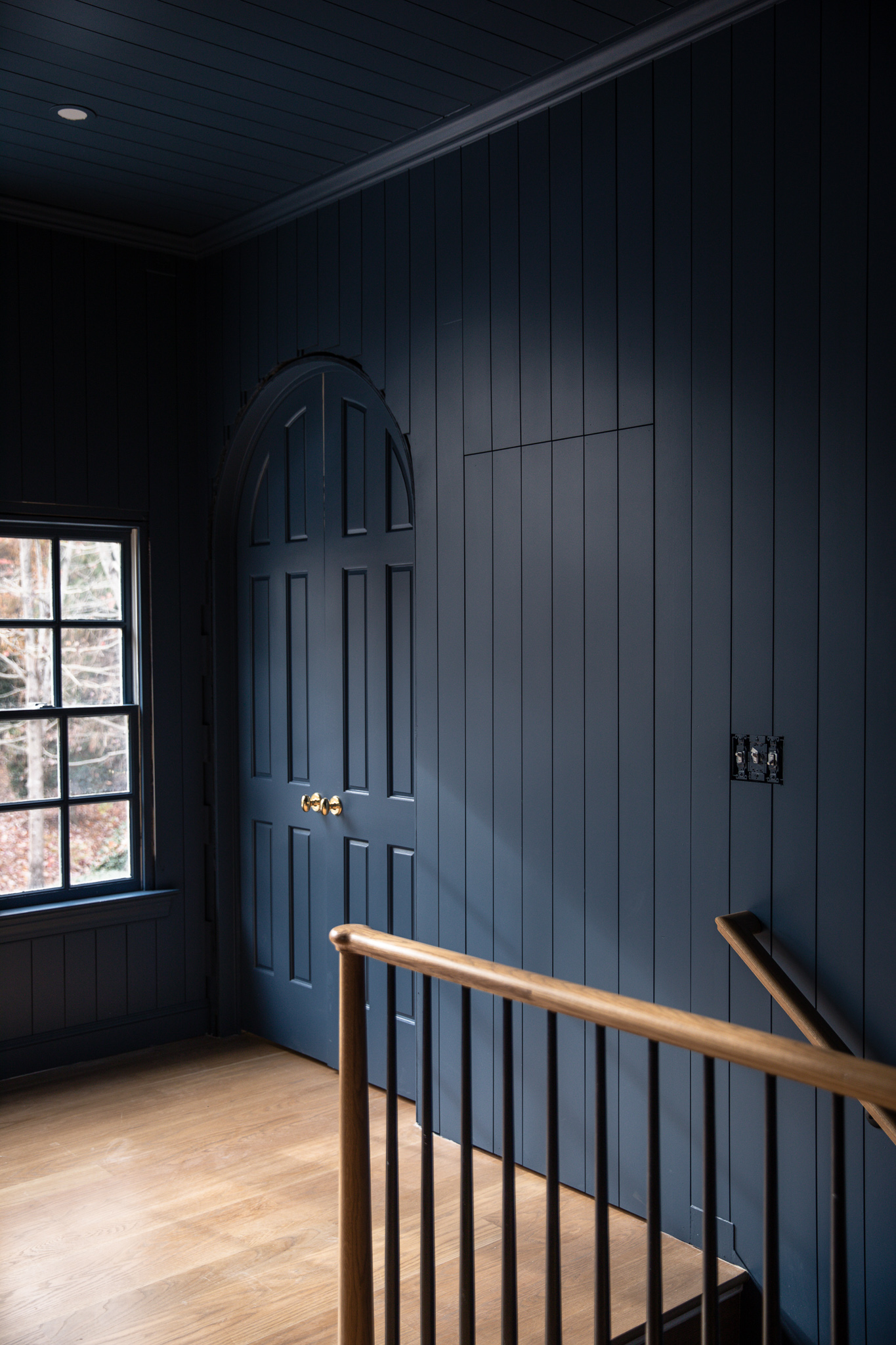 I spent a total of 4 days working on this project, an average of 3-4 hours a day. All-in-all, not bad for my first door and super cool to boot. Once we get the rest of the trim in the room I’ll add a little piece of baseboard along the bottom as well to finish it off, but for now we’re just enjoying the cool factor of this hidden door, and the unhindered beauty of the arched door next to it.

How to Display ANY Digital Art on Your Frame TV (and a few spectacular art options!) »