Last weekend, we hosted a low-key game night with 10 of our best friends and it was so much fun!   I shared a few snippets on my Instagram stories and got so many questions about the logistics–how we pulled it off with kids, what did we do for food and what games we played. So, I thought it would be fun to share all that information with you here, in case you’re craving a night in with friends (which is arguably even better than a night out, imo)! I wasn’t planning on writing this post, so I didn’t take any actual photos–eek! But I grabbed some screen shots from Stories for ya. My biggest advice is, it doesn’t have to be a big to-do or something to stress about. Game nights are supposed to be super casual and  a fun way to socialize and laugh until your cheeks hurt. We try to all get together about once a quarter for a night of games and it’s really one of our favorite things we do. 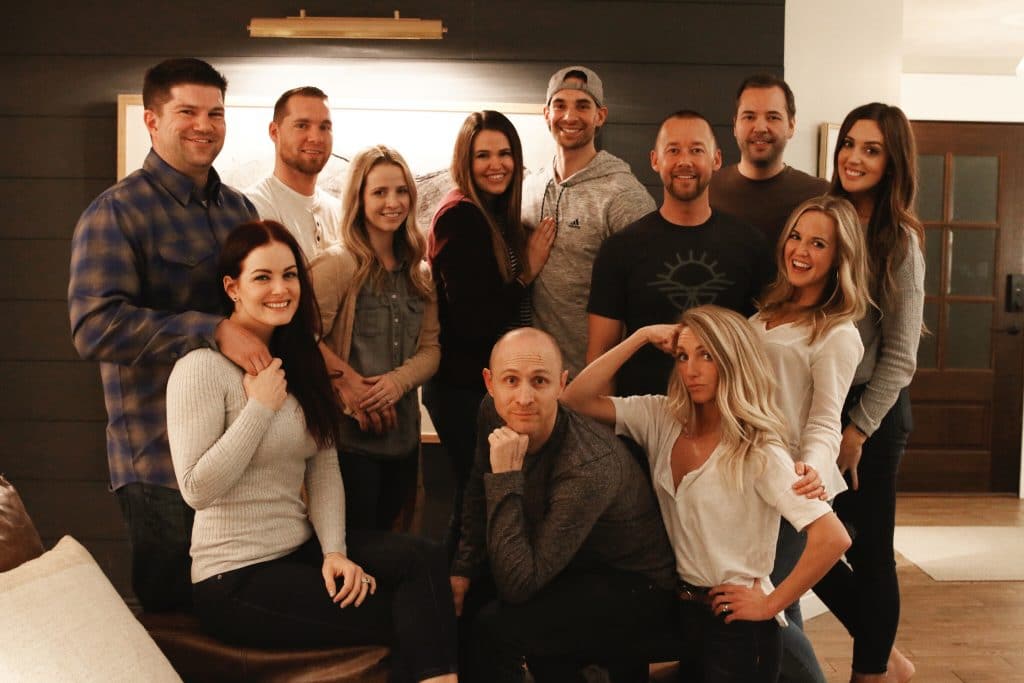 1. Set the date and get babysitters.

The most formal thing about the whole night is setting a date a few weeks in advance. All 6 couples (including us) have multiple children, jobs and obligations and coordinating schedules is no where near as easy as it was in college when we could get a big group together in 30 minutes. We threw out the idea at the beginning of March in a group text and found a date that would work for everyone at the end of March.

This gave everyone ample opportunity to block out the date and get babysitters.  We host a lot of “bring the whole family” evenings and dinners, but it feels so much more relaxing and low-key when no one has to worry about chasing their kids around. Since we were hosting at our house, I got a lot of questions, “But where are your kids?” Our 8 month old goes to bed at 6 (so she was sound asleep the whole time), and our older girls were going to sleepover their cousins’ house, but it fell through at the last minute. Instead I pitched them on a “special movie night with sleeping bags and popcorn” in the playroom. They loved it!

The first thing your friends are going to say, because you have the best friends, is, “What can I bring?” So take them up on it! We started our game night at 6:30, so we ordered a few pizzas and told everyone to bring “a snack to share.” There was a veggie tray, cookies, fruit and dip, chips and guac, even deviled eggs! Easy peasy.

3. Really fun group games don’t require lots of instructions or everyone huddling around a board.

Obviously the most important part of game night are the games! I love a good board game, a few of our favorites are:

Like Minds
Exploding Kittens
Monopoly Deal (probably 100x more fun than regular Monopoly)
Ticket To Ride
America (we played this a few times in a row over the holidays it was so fun).
Timeline
Grandpa Beck’s Cover Your Assets

When your group is larger than 6-8ish, it’s hard for everyone to have equal access to the board. So we try to keep our game nights to more free-form games or cards. I’ve learned that games with lots of instructions lose people quick, too. We love:

Mafia. I hadn’t played Mafia for a decade, but it’s still just as fun as I remembered! Basically everybody is handed a card besides the moderator/narrator. For our group of 12 there were 3 Mafia (Aces), 2 Police (Kings) 1 Doctor (Queen) and the rest were towns’ people (number cards). Every “night” (the portion of the game where everyone closes their eyes) the Mafia chooses someone to kill by quietly pointing out someone to the moderator. Then they go back to sleep and the police silently ask the moderator if someone is mafia or not. Then the doctor is able to save one person. In the “morning” (when everyone opens up their eyes), someone is announced dead by the moderator (unless the doctor saved the exact person the mafia chooses to kill) and deliberation to vote someone out of the town begins. You can lie. Persuade. Anything but show your card. And then you do it again until all the mafia or all the common folk are eliminated. It’s a riot. 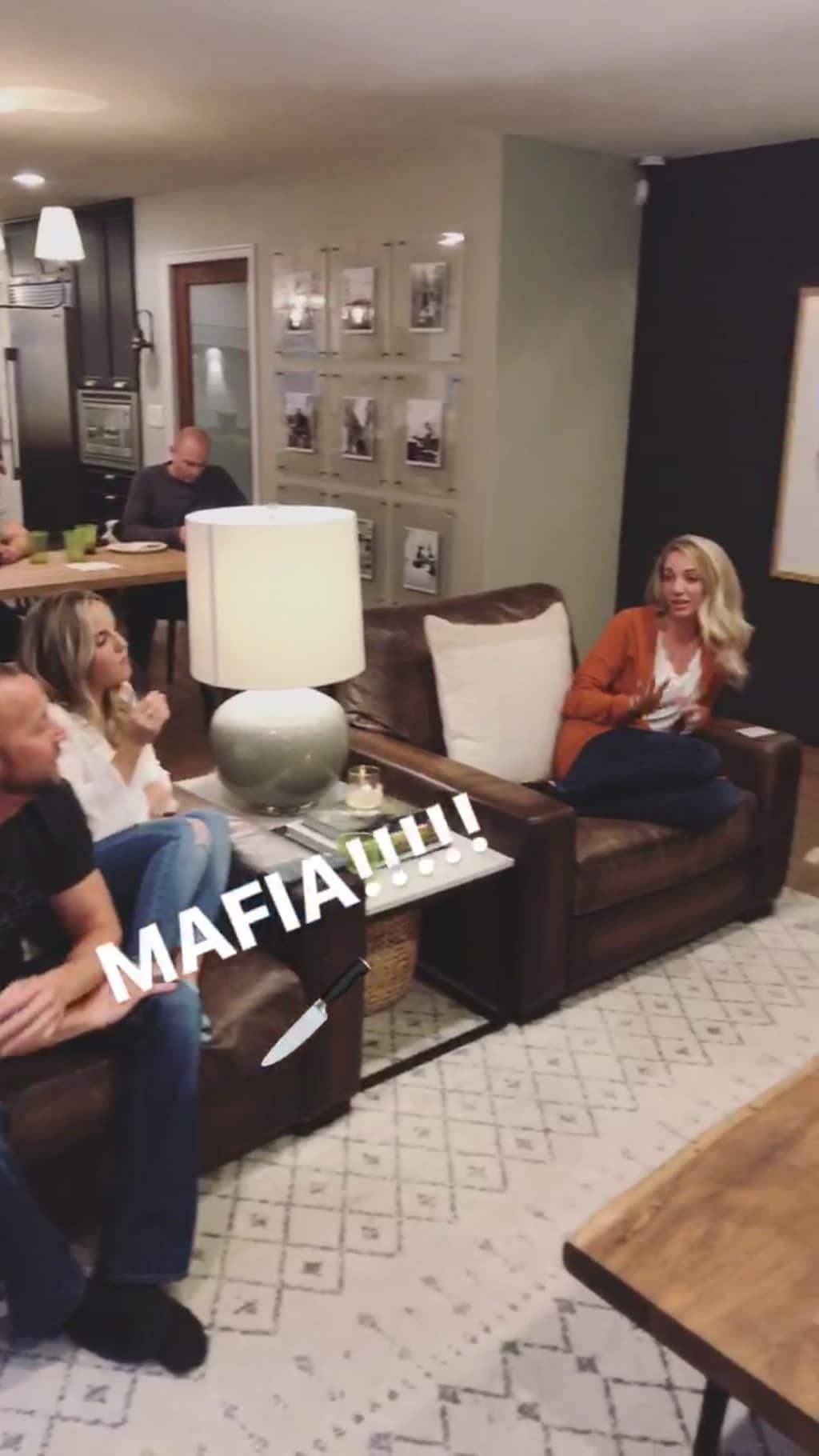 Telephone Pictionary (or Telestrations). We don’t have the actual game, so I just cut up enough paper for everyone playing. (If there are 12 people, then everyone needs 12 small pieces of paper). Everyone starts by writing any phrase, saying, lyric, movie, whatever you want. Then you pass it to the person to your left and they put the paper with your words on it to the back of the stack and draw what you wrote. Then the next person writes what they drew and so and and so forth until it makes it all the way back to you. How your original card morphs will usually make your whole group cry-laugh. We usually go around the whole table so everyone can share their sequence. 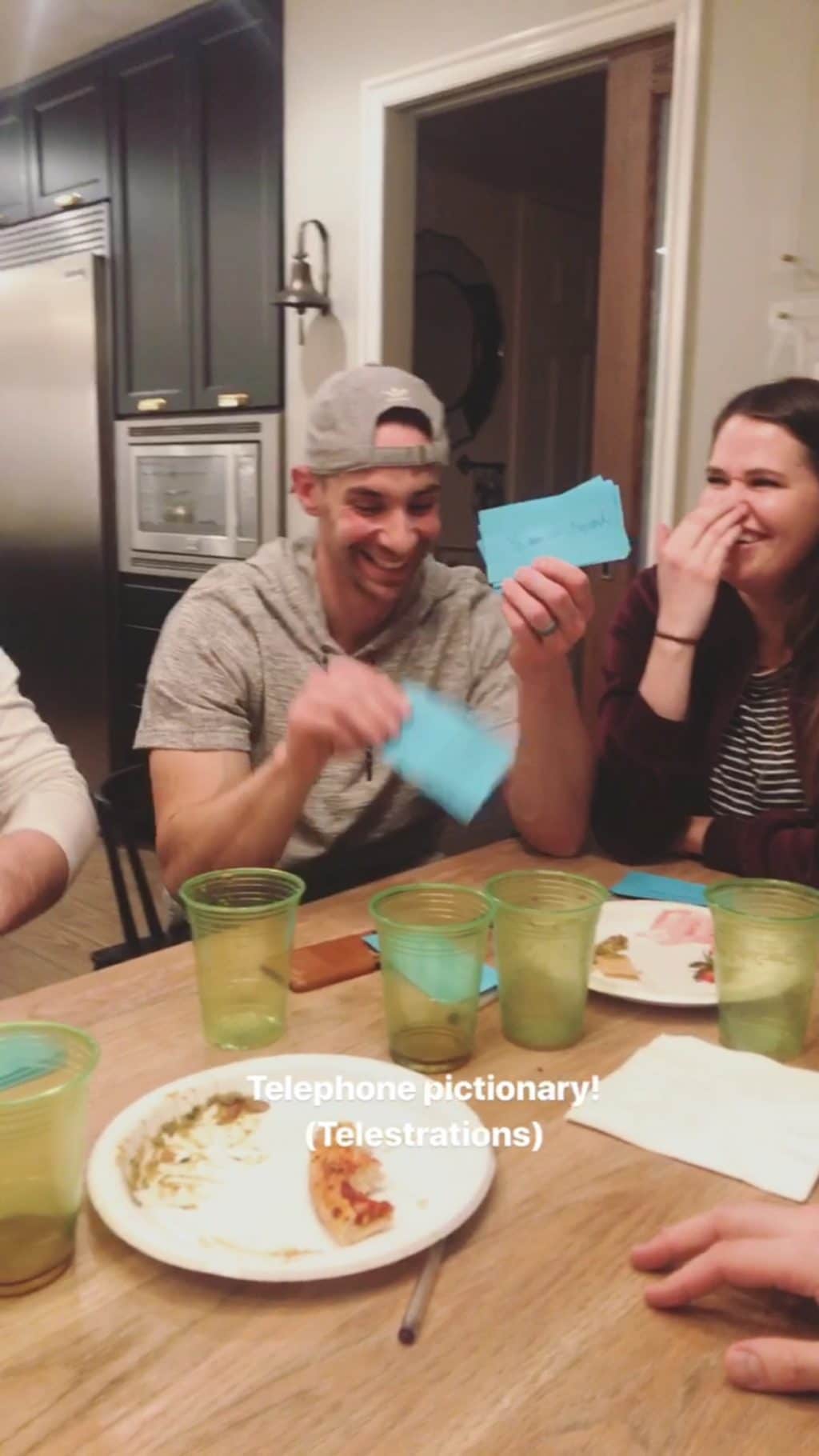 The Game of Things. We played this with some friends at a New Year’s party and then went out and bought it and played with my family because it’s so fun! It’s a game you can play it as couples or individuals where you read the hilarious topics and write down your answers, then try and guess who said what.

Time’s Up! If you’re familiar with the game “Celebrity” then you know what Time’s Up is all about. The first round you try to get your partner to say what’s on your card (could be a person, movie, song, book, place, etc.!) by saying pretty much anything besides what’s on the card, the second round you can only say one word and the third round you can only act it out. It’s one of our favorite party games and we still haven’t gotten through all the cards it came with!

Scum. When I showed my family playing this card game up at our cabin over Christmas, a few of you chimed in that you know it as a$$ho#*. By either name, my whole family loves this game and we often play it with our friends, too. All you need is two decks of cards for a group. Here’s a breakdown of the rules. 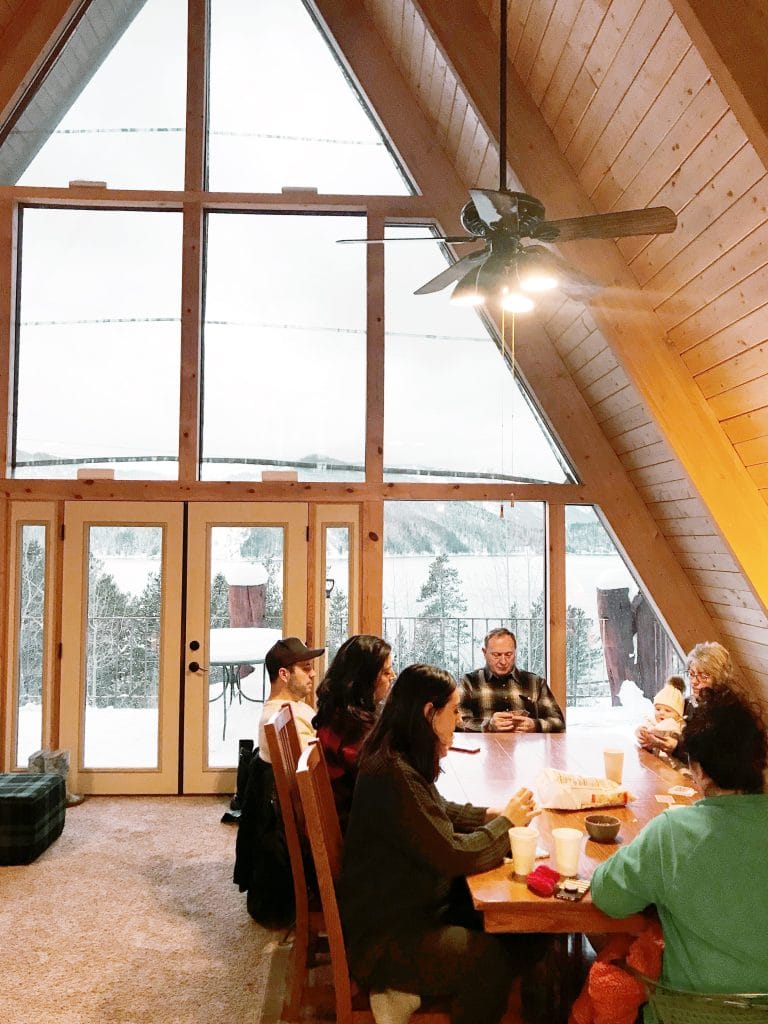 Reverse Charades. You can actually buy this game, (we always use the free app called Reverse Charades). This game is one we played with Chris’s family a few years ago and we still laugh about it! The rules are simple, roles are reversed in charades (so your whole team is acting something out while one person tries to guess what it is.) but it’s hilarious to see what people come up with!

HQ Trivia. If you aren’t familiar, it’s an app (you can use the referral code chrislovesjulia if you want–that’s my screen name over there) that’s a twice-a-day live 12 question trivia game where you can win actual money. You only have 3 seconds to answer the multiple choice questions (no switching your answers). The questions get progressively harder and it usually just takes about 15 minutes. The fun part is you’re competing against a million (or more) people playing all around the world. Everyone that gets all 12 questions right, split the winnings. Sometimes you walk about with less than a dollar, sometimes $20,000! No, none of us have ever won, but we’ve gotten really close. Truthfully,we didn’t plan to all play at 7pm (when it started on game night) but we were still all munching on pizza and catching up and then we all got the notification it was starting and soon we were all screaming out our guesses, and all 12 of us were out by question 9 or 10. Still so fun.

Bottom Line: Host a game night. Even adults need to have fun every once in awhile.

Would love to hear if you have any favorite group games to add to the list!!

« Sale Alert! Extra 30% off All Sale at Urban Outfitters 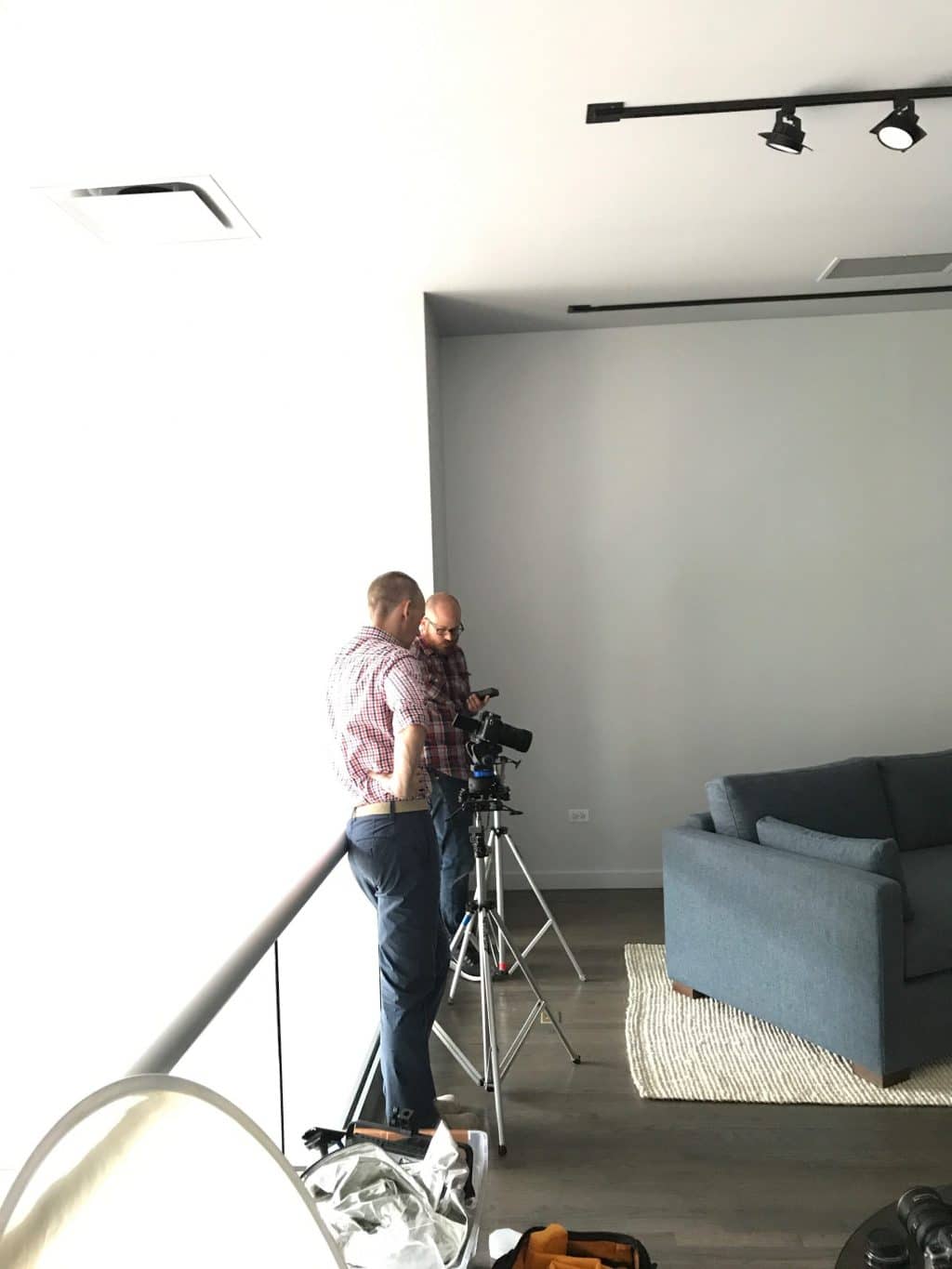 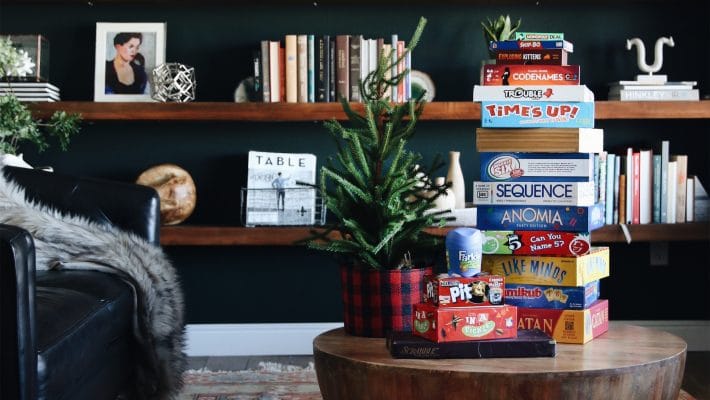 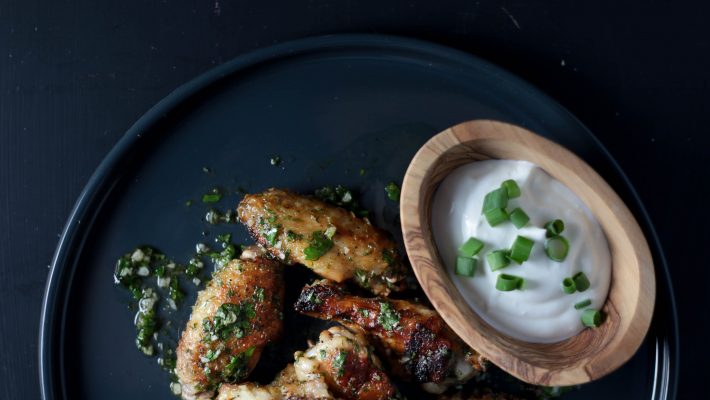