When I lived in Louisiana, I met a man named Skip. Skip was a young Cajun who made a living catching crawfish out of the bayous and shrimp from the gulf, and selling them roadside out of 2 old coolers. He lived a simple life, spent most of his time alone, and always smiled. And Skip is the man who taught me how to make southern fried shrimp.

Shortly after starting college, I had a roommate named John. The rest of us in the apartment called him “Yanni” some days, and “Papa John” others. Then it became “Papa Yanni” full time. John was studying culinary arts, and was a major factor in me taking my first culinary arts class, which led to me making it my minor. John is now the chef de cuisine of the Green Zebra in Chicago, and is the man who taught me how to make coconut shrimp.

This dish is a hybrid of the two that I came up with when Jules was on a strict, gluten-free diet. But before we dive into it, let’s go over the proper steps to fry something.

First, you almost always fry at 350. Shrimp, chicken, whatever. It’s almost always 350. There are exceptions of course (like french fries which are best fried at 350 once then 400 a second time imo), but the general rule of thumb is 350. This allows the inside of whatever it is you’re making to cook through without burning the outside.

Second, I suggest a classic 3 step process. You dredge in seasoned flour (or a mix of cornstarch and cornmeal in this case), put in an egg wash, then coat with your final coating (more flour, breadcrumbs, etc). Those are tips that you can use universally for frying, but let’s apply them specifically to this dish. This makes enough for 2-3 people, depending on how hungry you are.

You need to toast the coconut first by laying it in an even layer on a sheet pan and putting it in the oven at 250 degrees. Stir it around every 3-5 minutes until it starts to brown and has dried out well. You need it to be dry or else it will be chewy. Also, I would not recommend using sweetened coconut flakes. The added sugar increases chances of burning.

So this is super easy. Put the oil in your fryer and preheat to 350 degrees. In one bowl, put the ingredients for your dredge and mix them together well. In another bowl, your egg wash. In another, your shredded coconut. Move from one bowl to the other, starting with the dredge, then the egg, then the coconut, making sure to coat it well. Also, between each step, shake off any excess stuff. Too much dredge will make the coating too thick, too much egg will cause your oil to bubble a lot, and too much coconut leave lots stuff in your fryer, which will burn and make all your shrimp taste bad, even though they aren’t burnt. Fry in small batches for 2-4 minutes, until the outside is golden and crunchy. Set on a paper towel to let the excess grease drain off, and eat ’em up! 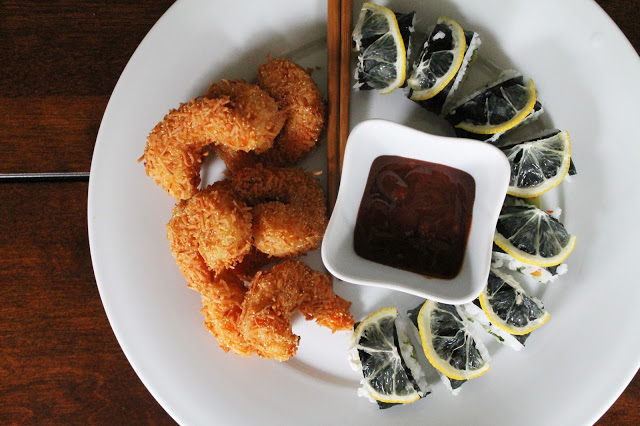 We paired ours with a little vegetable sushi – carrots, cucumber, green onion, with lemon on top. The sushi lightened the whole thing up and kept us from feeling like we’d just eaten a pile of fried food. And the sauce is bold and spicy, but doesn’t completely overpower the shrimp.

So there you have it. Yet another dish that seems complicated, but is super easy. These are the best ones because you can impress everyone without breaking a sweat. Do you do anything special with your fried shrimp? If so, feel free to share and we’ll catch ya laterz (with a “z”). Peace out! 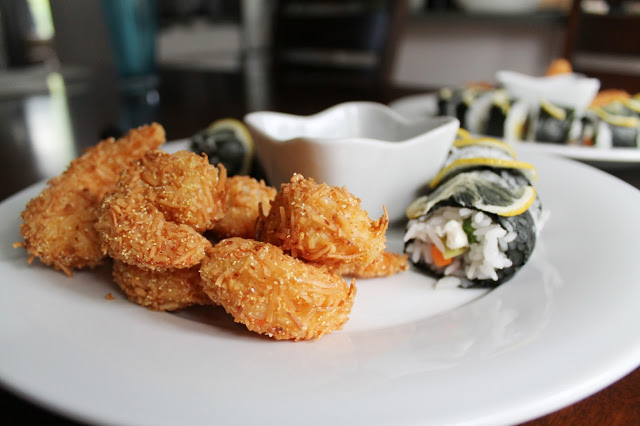 How We Spent the First Weekend in Our New House »