All the Details on our New Horizontal Stair Railing!

It’s hard to believe these stairs have been in limbo since March when we tore out all the carpet and hand rail in anticipation of getting a new one–see this post for those details. Although, that span of time was never the plan and I would never recommend going 7 months without a handrail (like, ever), now that we’re on the other side, and we all survived, I’m just happy it’s in and can’t wait to share with you all the details today. 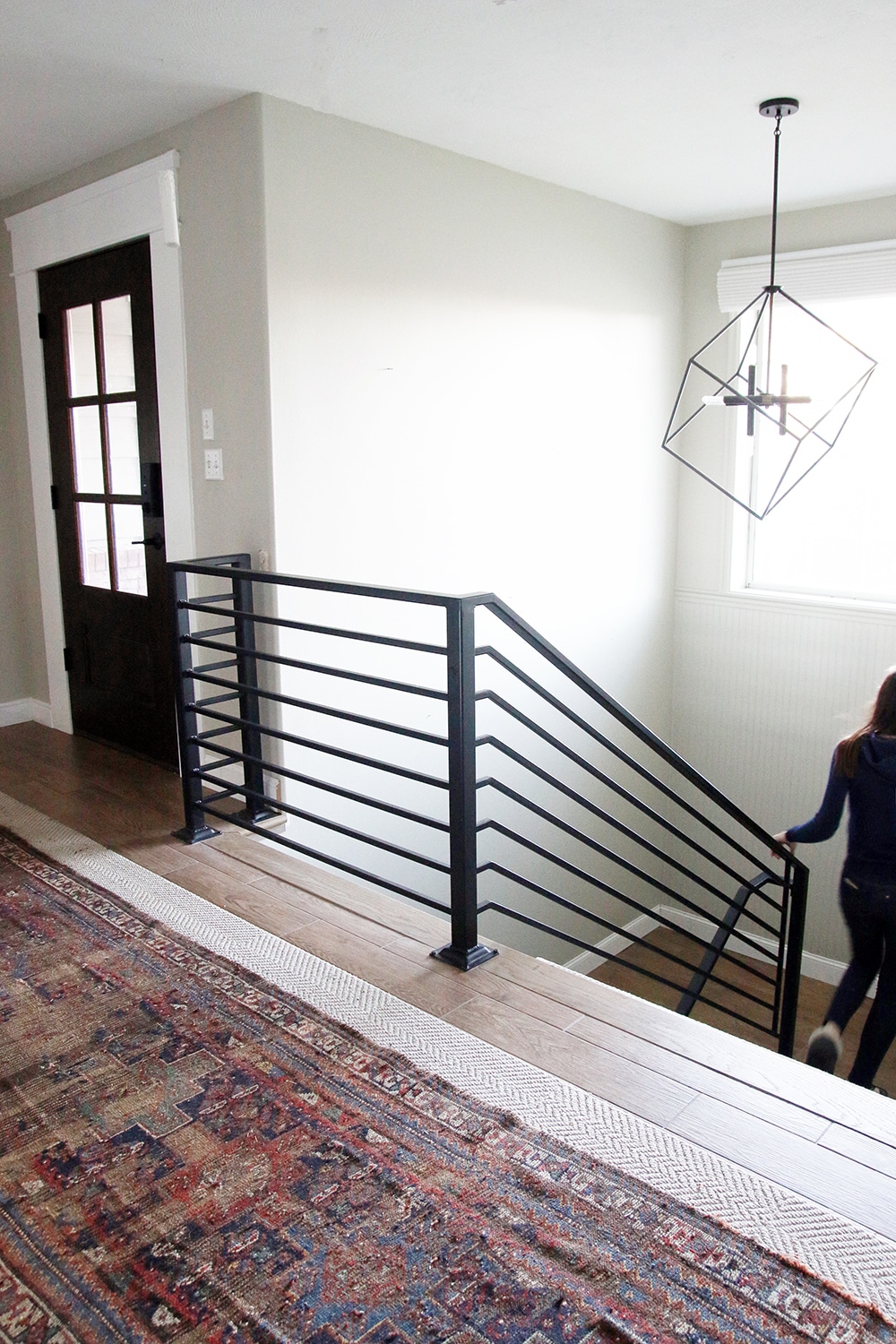 Designing this railing was only as hard as choosing between a vertical and horizontal railing, which I went back and forth between for some time. I pinned inspiration images like crazy and ultimately decided in the 11th hour that horizontal was for us. I added one vertical portion at the stair landing–a small but lovely detail. 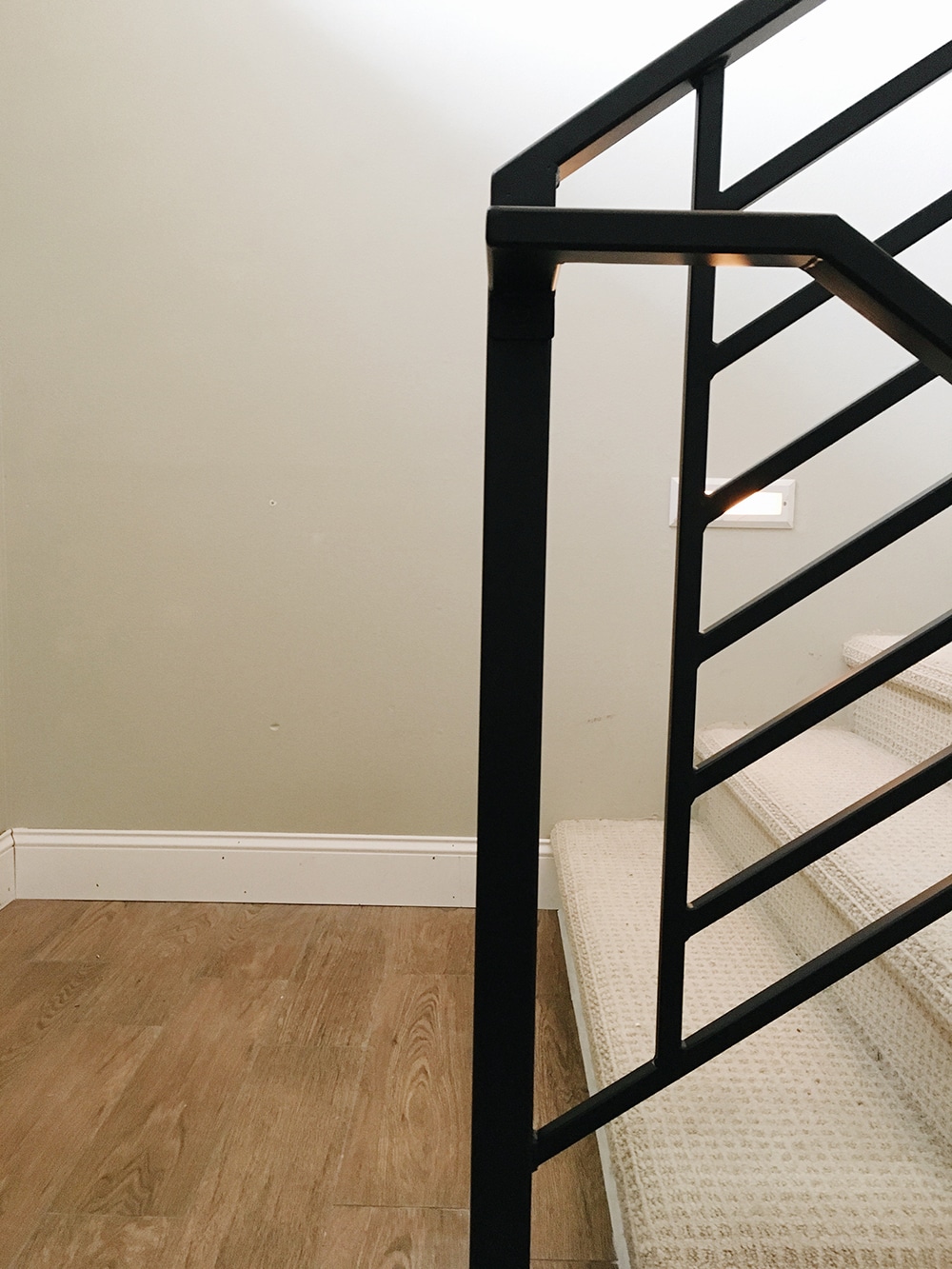 Speaking of the stair landing, just last week, before the install, we decided to swap out the carpet for more of our faux wood tile that runs the span of our main floor. While the rest of the carpet on the stairs and downstairs has been holding up great, Charly loves to sleep on the landing at night–where she can keep watch on her whole family– and the carpet is impossible to keep clean in that spot. 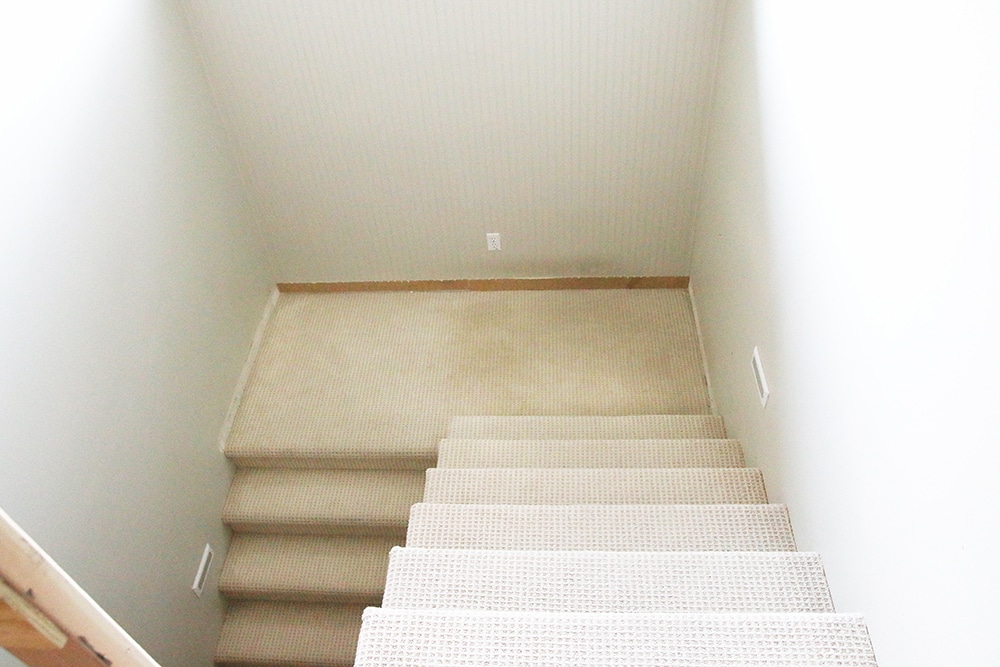 We have plans to lay an area rug for her–one that I can easily and frequently throw in the wash so she can still enjoy her spot, but we’re all enjoying the ease of cleaning it for now and I like the look, too! 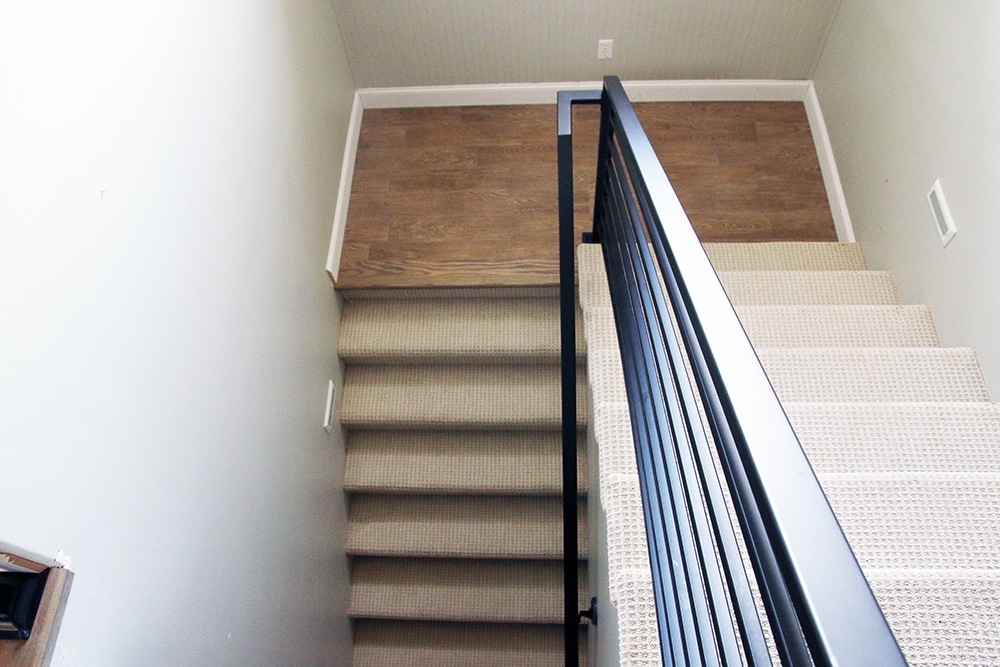 Many of you know, we did have trouble getting this job done–hence the 7 month delay. I had a specific vision in mind of what I wanted and it wasn’t something we could DIY so it was something we had to hire out. Many contractors came and gave us an estimate and then would never come back! It was frustrating, and reminded me how much we love doing things ourselves and being in full control of the timeline. But I know we’re not the only ones that have to deal with those renovation setbacks. For those that are interested, ultimately, we used Rocky Mountain Fabrication & Construction and we’re in love with the results. They came in for a consult measurements. I showed them pictures and they asked me some specific questions on how thick I wanted the different railings. 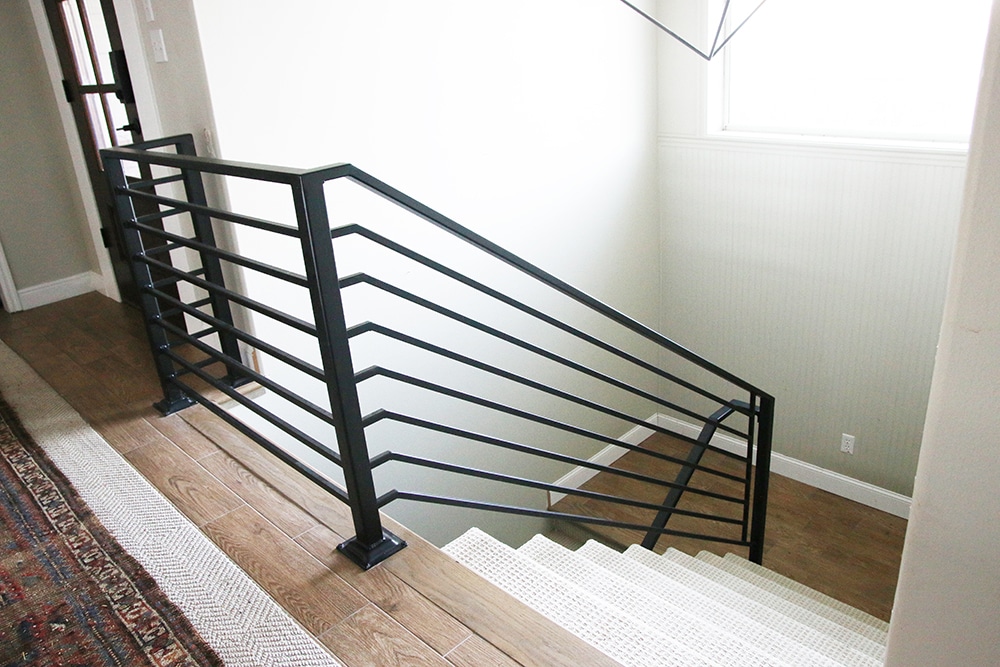 A few days later, they brought in large sheets of plywood to map out the dimensions and about a week later, they brought in the railings for a dry fit before they were powder coated. I was so nervous to see them that first time because the original consult was pretty brief and I worried about my vision coming through. But they nailed it. A couple days later, they were installed. The fabrication and Installation together cost $1500–which I think is very, very reasonable.

While everything is made from tile, the stair nose is actual wood stained to match the tile. In these pictures, you can kind of see how there’s a tiny lip bowing up in between the where the rails and screwed down. It isn’t noticeable in real life and we were assured it would eventually settle in, but after seeing these pictures, I might go put a stack of books on it! 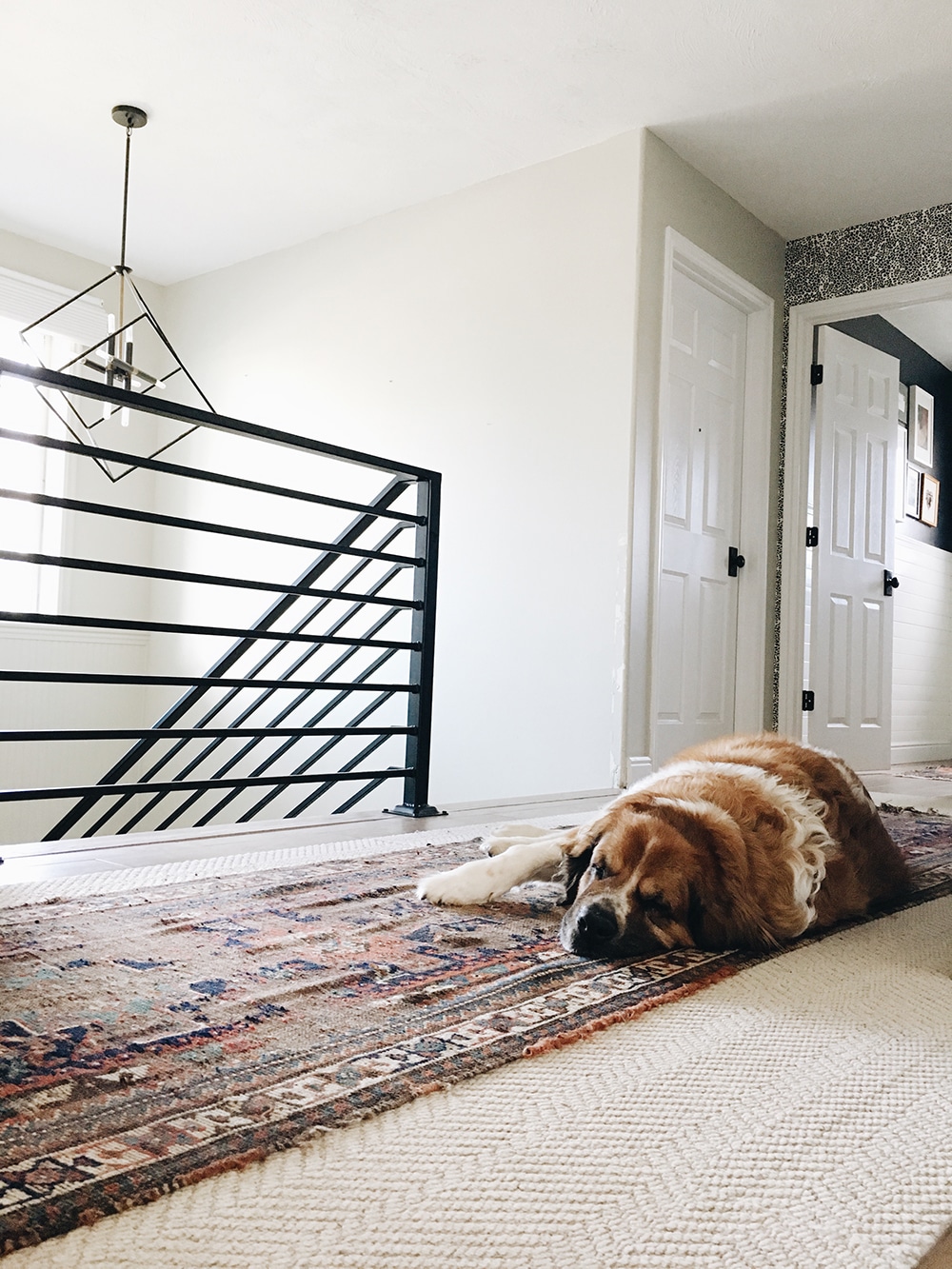 As for any fears about the kids “climbing these like a ladder”, it hasn’t crossed our minds because it hasn’t crossed theirs. I have a friend that has a child that will climb anything! Our girls just aren’t like that. That’s not to say they never will, but right now, it’s not a concern. We just survived 7 months of no railing, so we’re feeling especially safe and secure. Haha.

As for the rest of the stairwell, we know have a clearer vision of where we’d like to go with it. But it’s always fun to look back, too. Here’s where we started: 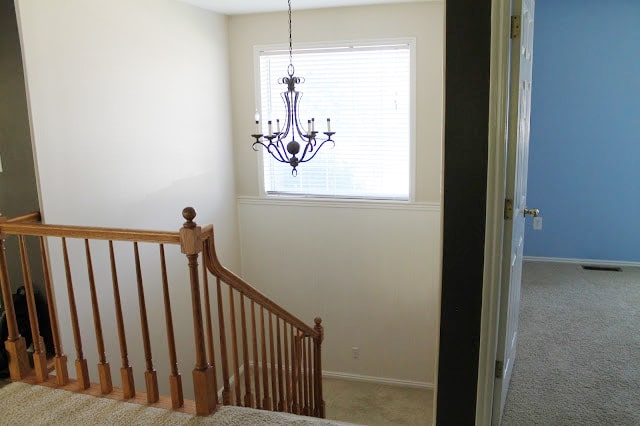 Then we painted the railing… 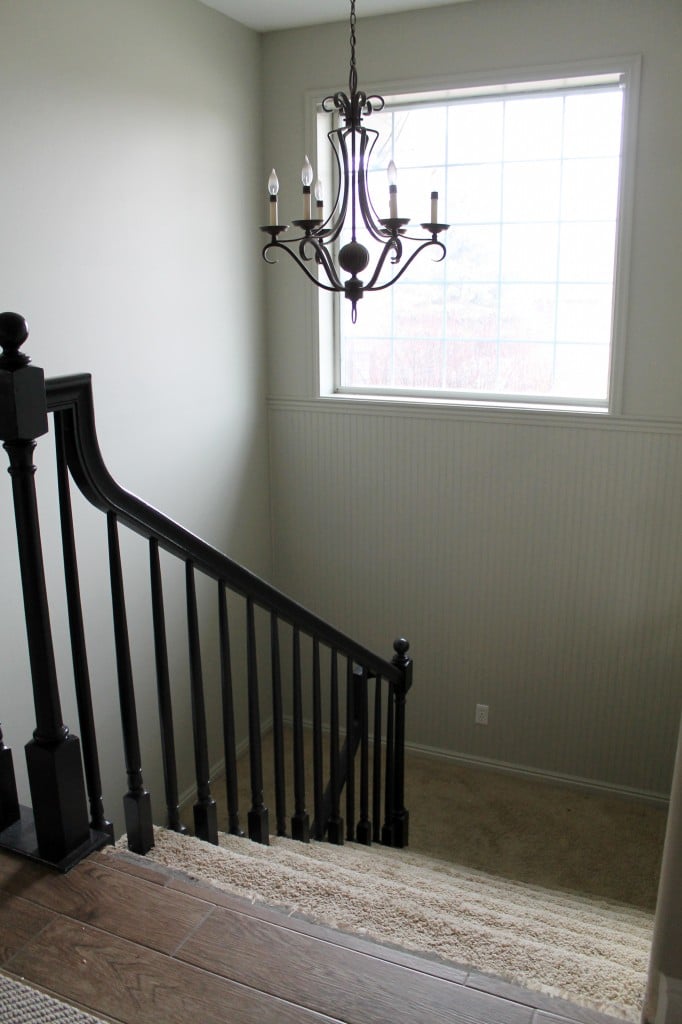 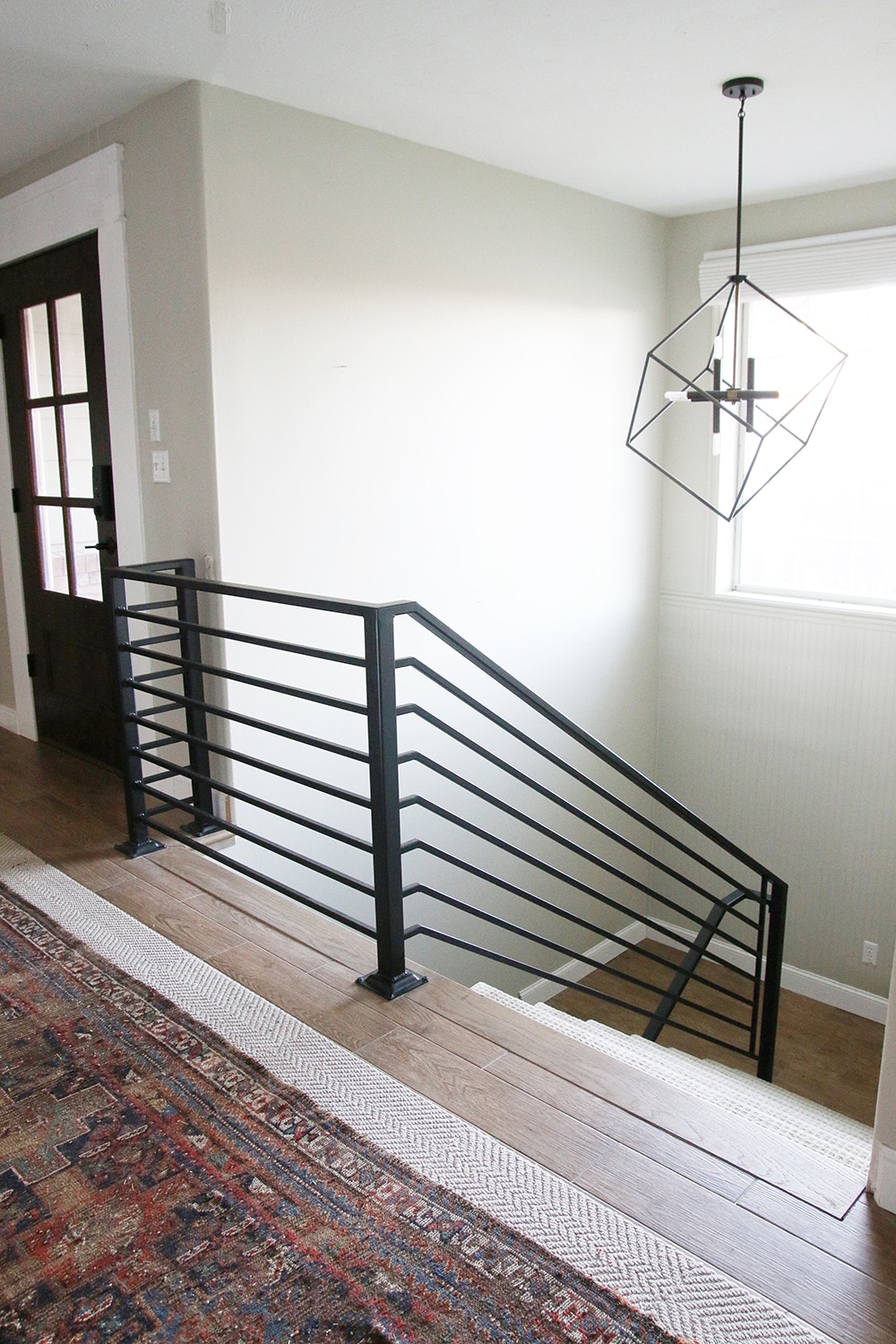 The railing really has changed the whole vibe of the house. It feels more like us and fits in better with the rest of the choices we’ve made around here. I had this vague idea that, before we dove into this project, that a stair railing would be closer to $3K+, but this felt affordable and like something anyone could save up to do to update their home. Is there a new railing in your future? Or if you got one recently, it would be fun to share the cost, your region, and even a link to a picture if you got it in the comments! We’d love to hear and share different experiences.

Ps. The pretty new runner on top of the FLOR squares in our entry is from The Vintage Rug Shop.

One Room Challenge: Week 5 | There’s Nothing Like a Fresh Coat of Paint »