So… we started that whole “Julia Loves Chris” blog, and then realized it was kinda pointless to have two separate blogs. So I’ll be posting my food stuff 3 times a week here instead.


As promised, I’m gonna share my crispy pork belly and roasted potatoes recipe today, but I’m gonna do it in 2 installments – one today and one on Friday. It’s not necessarily “difficult”, but there are a few steps to it and I want to make sure each part of the dish receives the attention it deserves. Today, the pork.

Fun fact. Pork belly is where bacon comes from. So if you like bacon (bahaha, I said “if”), then you’ll like pork belly. You’ll quickly realize that pork belly is not easy to find. If your butcher doesn’t carry it, most can order it in but it can be pricey that way. Lucky for me there’s a legit Asian market about 1 mile from where I work that sells pork belly, so that’s where I get mine. So maybe search around for some Asian markets and see if they have a butcher. If they do, they’ll probably have pork belly.

I cooked this pork in a pressure cooker. You can slow braise it or even cook it in the crock pot as well, but you’ll need to add 6 hours or so to the cooking time. Maybe longer. When cooking in a pressure cooker, there are a couple things to note. First, don’t mess with it once it’s going. I ran a cloth along the top to dry the lid and my cloth barely touched one of the rubber plugs that regulates the pressure. The plus shot out and hot, meaty juices erupted all over my kitchen and dining room. I mean, all over. It took me a couple hours to clean everything up. Second, you need to let the pressure come down on its own. Don’t rush it.

Here’s what you see in the picture:
• pork belly in pressure cooker in 1 layer. Don’t stack.
• 1 onion, cut into chunks.
• 4 garlic cloves, peeled and smashed, but not cut up
• 2 bay leaves


The ingredients you don’t see are all in the liquid. Just mix them together and pour them into the pressure cooker. Seal the pressure cooker and keep the pressure high as you cook for about 1 hour. At one hour, remove the cooker from the heat and let the pressure come down on its own. Should take about 20 minutes or so. Heat a frying pan over medium/medium-low heat

Remove the pork carefully. It will be very tender, so take special care. Unless you’re a ninja master with the tongs, I’d suggest using a couple of spatulas or something where you can get under it, not pinch it. Set the pork, fattiest side down, on a double layer of paper towel to remove some of the moisture. Place your pork in your heated frying pan, fattiest side down. You don’t need to add oil. Cook until the fat develops a crust, then flip and do the same to the other side.

And that’s the pork. Not too difficult. On Friday I’ll talk about the potatoes and what you’ll be doing during the hour the pork is in the pressure cooker. You’ll definitely want to check it out, especially if you:
• think roasted potatoes are boring
• can’t keep potatoes from sticking to the pan
• don’t care for kale
• have never made pesto

If that’s not enough motivation, then here’s a little peak at the finished product: 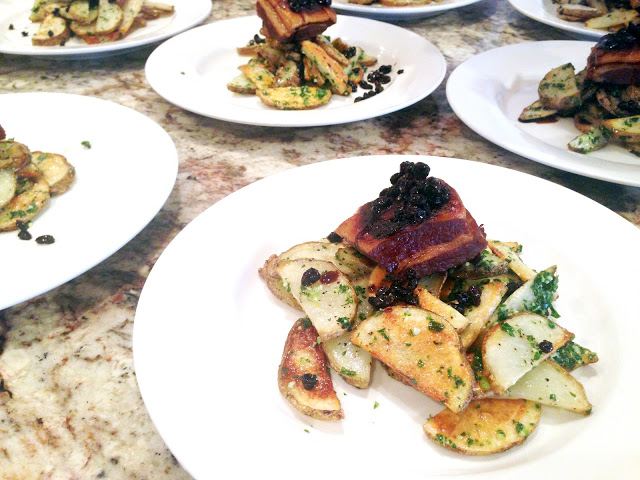 Where To Put Curtains On A Window That has An Arch »