The New Cabin Chandeliers + What’s Working and What’s Not!

Just when everyone was getting used to the bladeless ceiling fans, we go and upgrade them.  Previously, there were two ceiling fans here–the blades were removed for painting and we never put them back up because we had already ordered two of these large, round 12 light chandeliers for the main area at the a-frame. 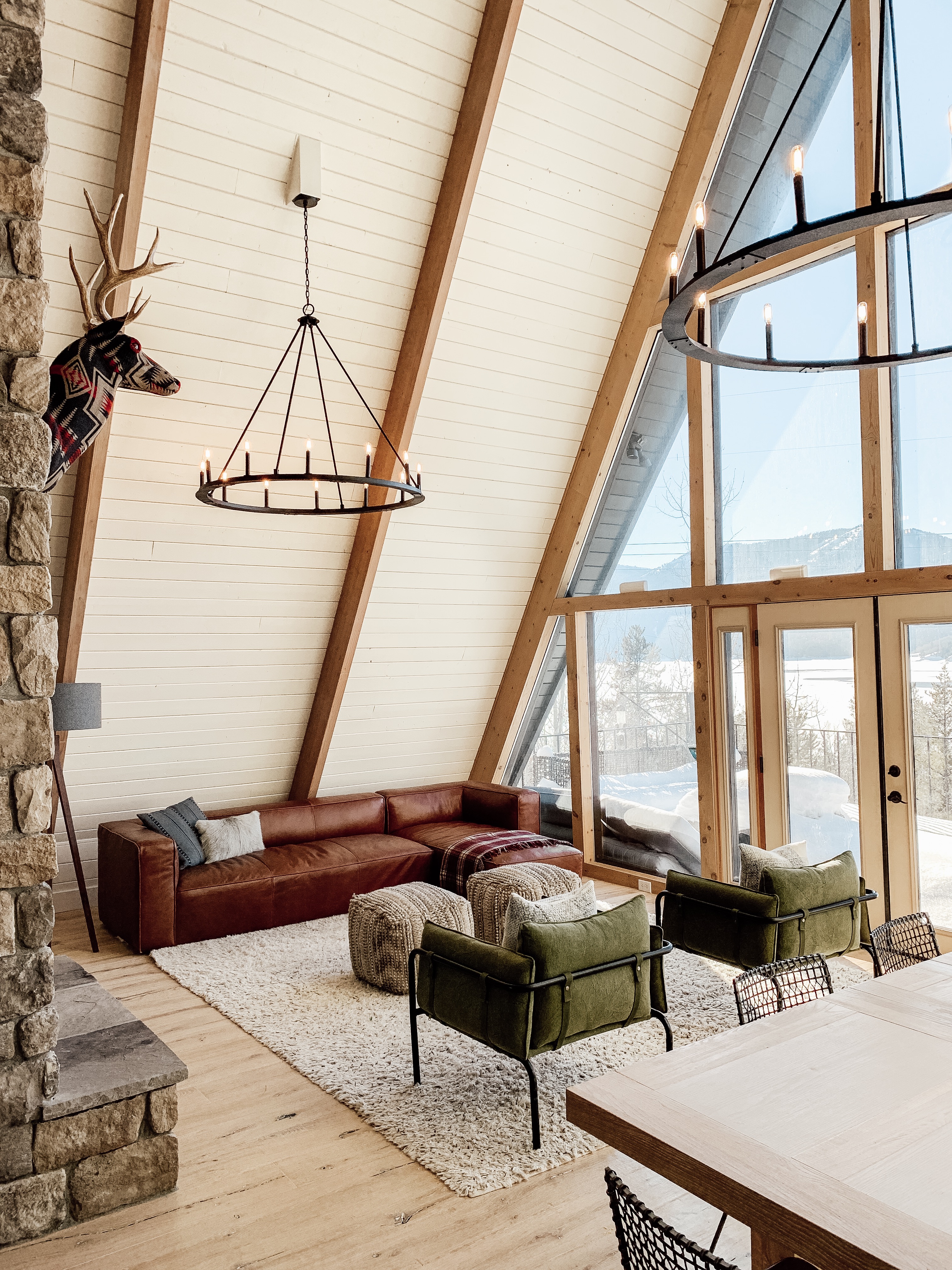 When we were deciding about chandeliers, we really wanted to embrace the modern rustic vibe we’re going for throughout the whole space and what says that more than these modern, clean-lined, wagon-wheel type chandeliers.`After I showed my sister, she started singing Gaston’s song from Beauty and the Beast. Nailed it. 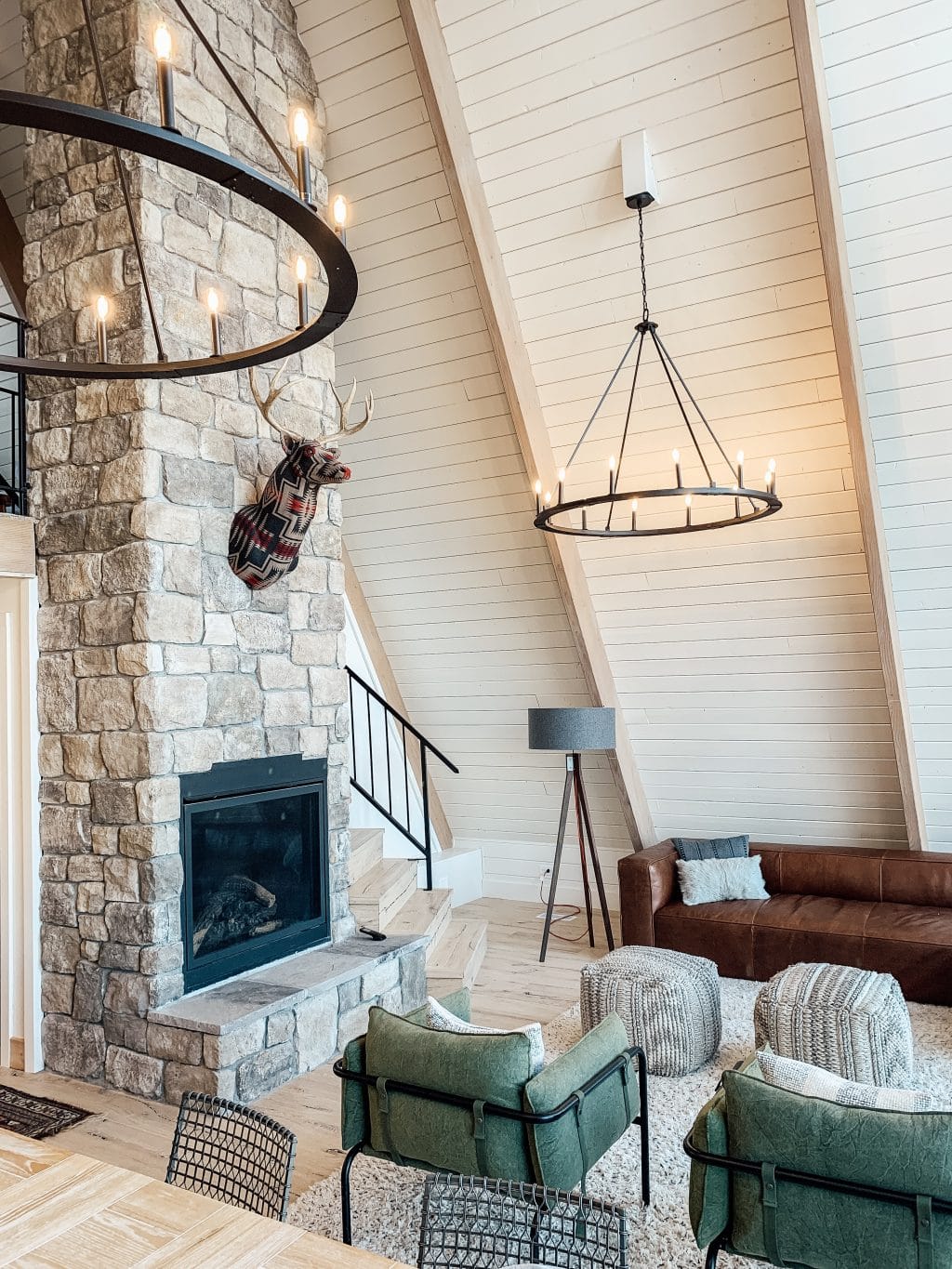 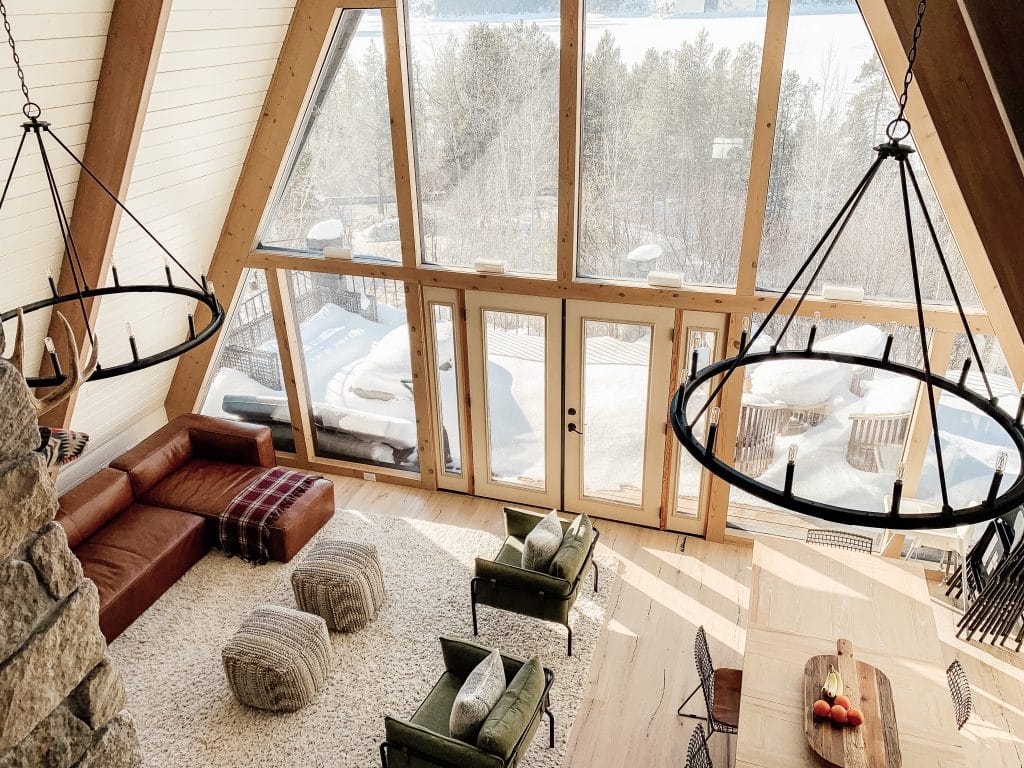 The slanted ceiling boxes holding the electrical were already in place (and couldn’t easily be moved), we had them painted to blend in with the walls so Chris was able to get them wired pretty straightforward, and with a couple extra hands. We purchased these LED tubular bulbs for each light. The shape makes it even more modern, the coloring is spot on and they are super energy-efficient so we won’t have to change them often. 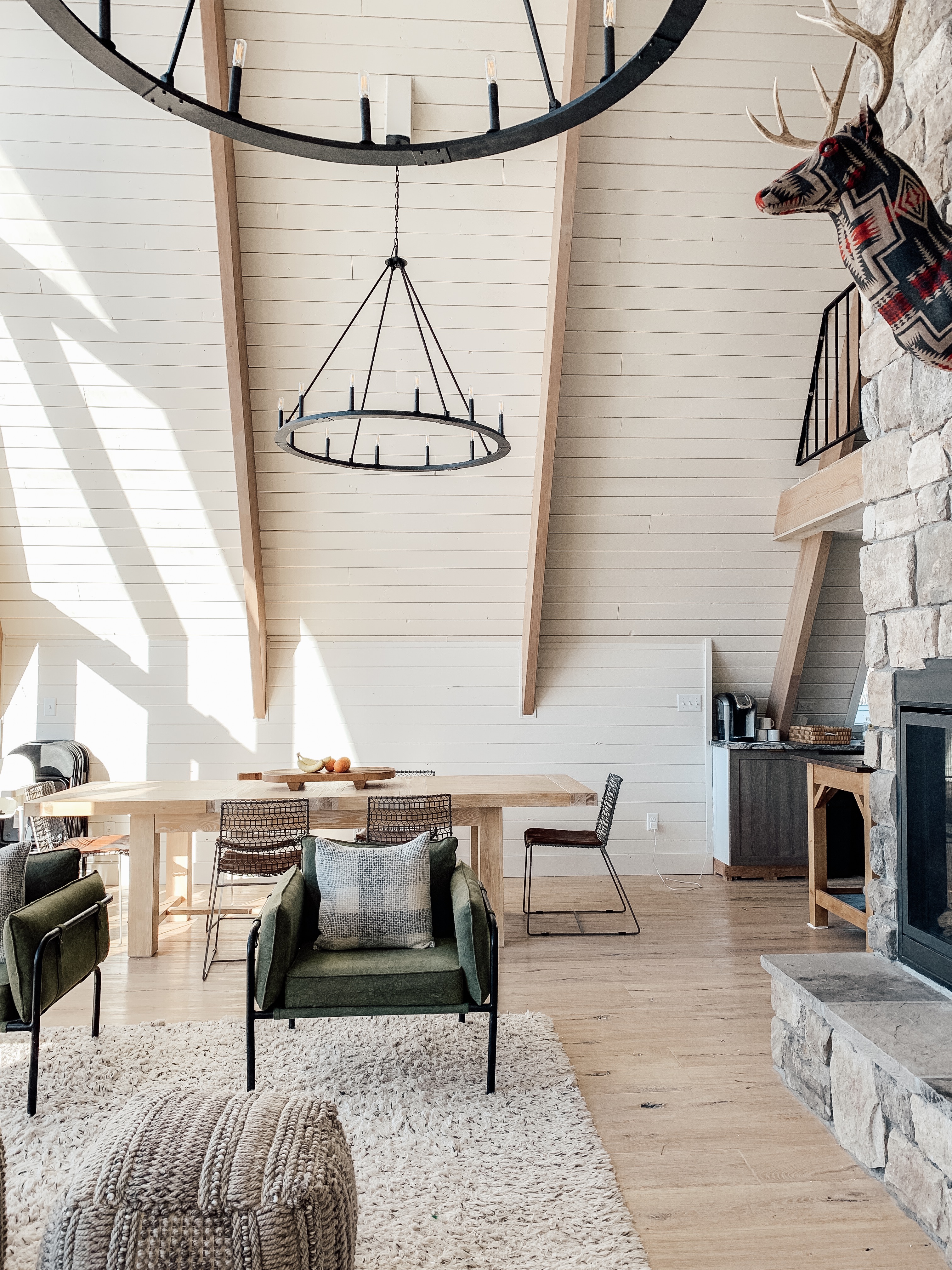 Flipping them on for the first time–it changed everything! We definitely want to add a dimmer, but we realized how much literal darkness we’d been living in. 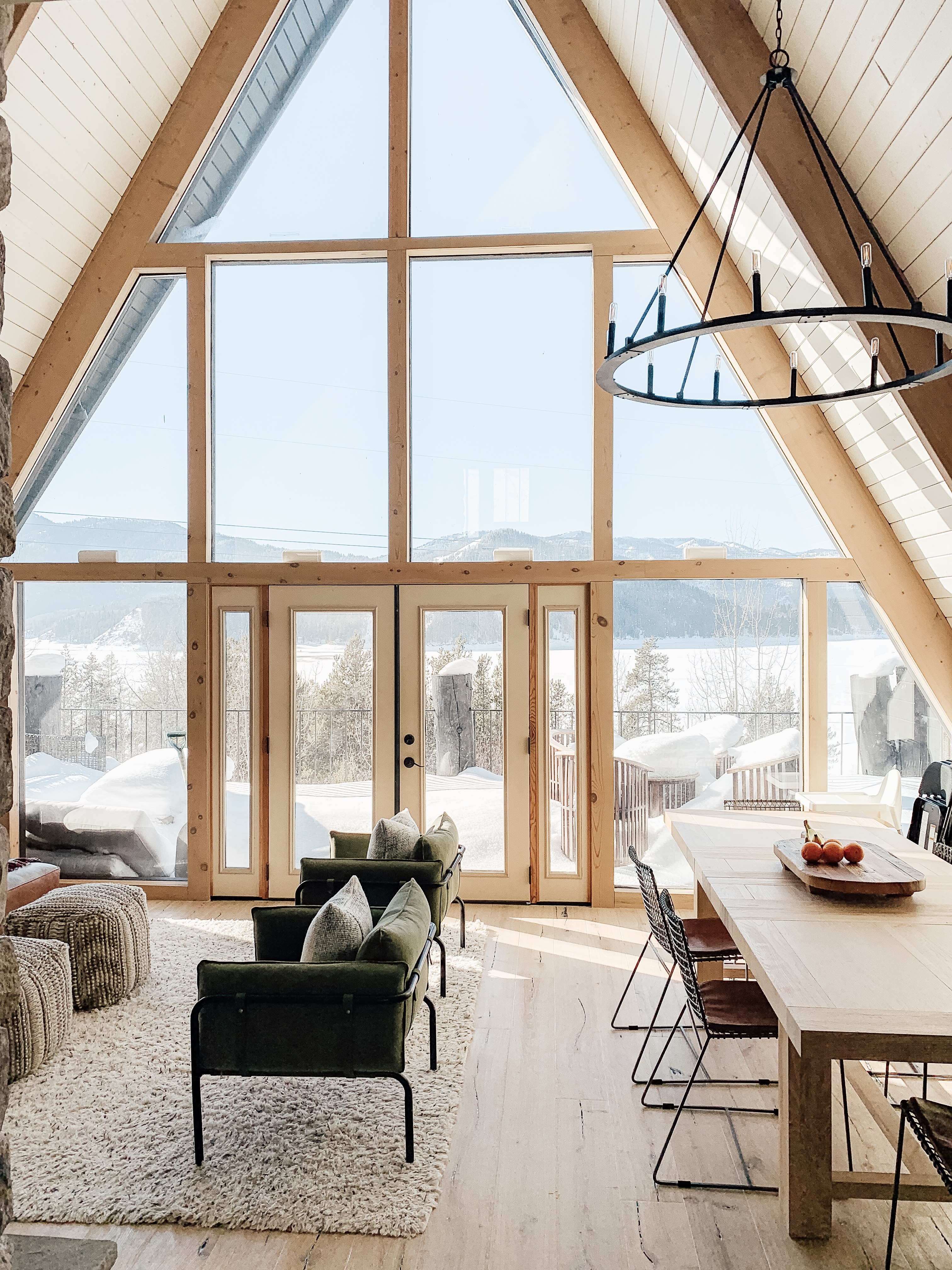 The chandeliers were a big, HUGE step in the right direction, but there are a few things that are in place that we’ve learned are all wrong, or just aren’t working like we thought they would.

1. The Living Room Rug–You may remember this rug used to live in our bedroom at our primary home. We moved it up here when we switched things up in our bedroom but we definitely need something wider (it’s a 9×12) and something darker to ground the space. 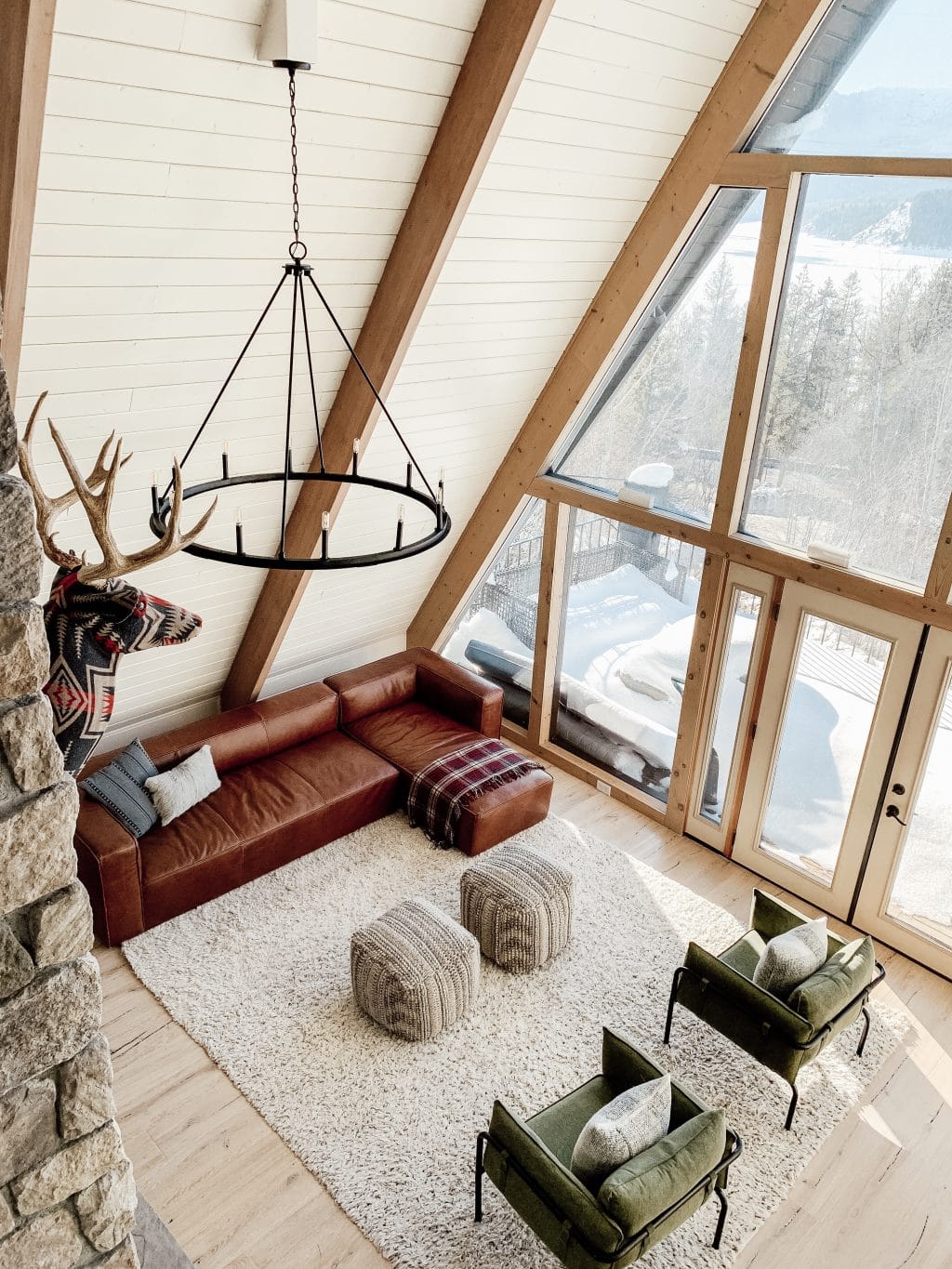 2. The Green Living Room Chairs--I want to LOVE these chairs because they are so quintessential cabin chairs. But the snaps will. not. stay. snapped. I might glue them in place and reassess my feelings.

3. The Dining Room Table–This is a saga. We ordered a really great round table for the space. I thought after I bought it, it would be okay to share with you, but because it hadn’t shipped yet, the shipping kept getting pushed farther and farther out. It was December, then January, then March. I started looking for another table because I didn’t want to wait until March and I found the Ryan table from McGee & Co. It was in stock and should be at our place by December 21st. December 19th, we got an email from McGee & Co saying that they were so sorry, but there was an issue with shipping and they didn’t want to leave us empty-handed for the holidays so they let us borrow the Bettina dining table. (Chris met them half way and picked it up!) And then, well, we fell for the Bettina table! And then the Ryan table showed up. And we loved that, too. But ultimately, we just JUST decided to stick with the Bettina table. With a darker living room rug coming in and a darker island (more on that in a minute), it’s the beautiful break the space needs. 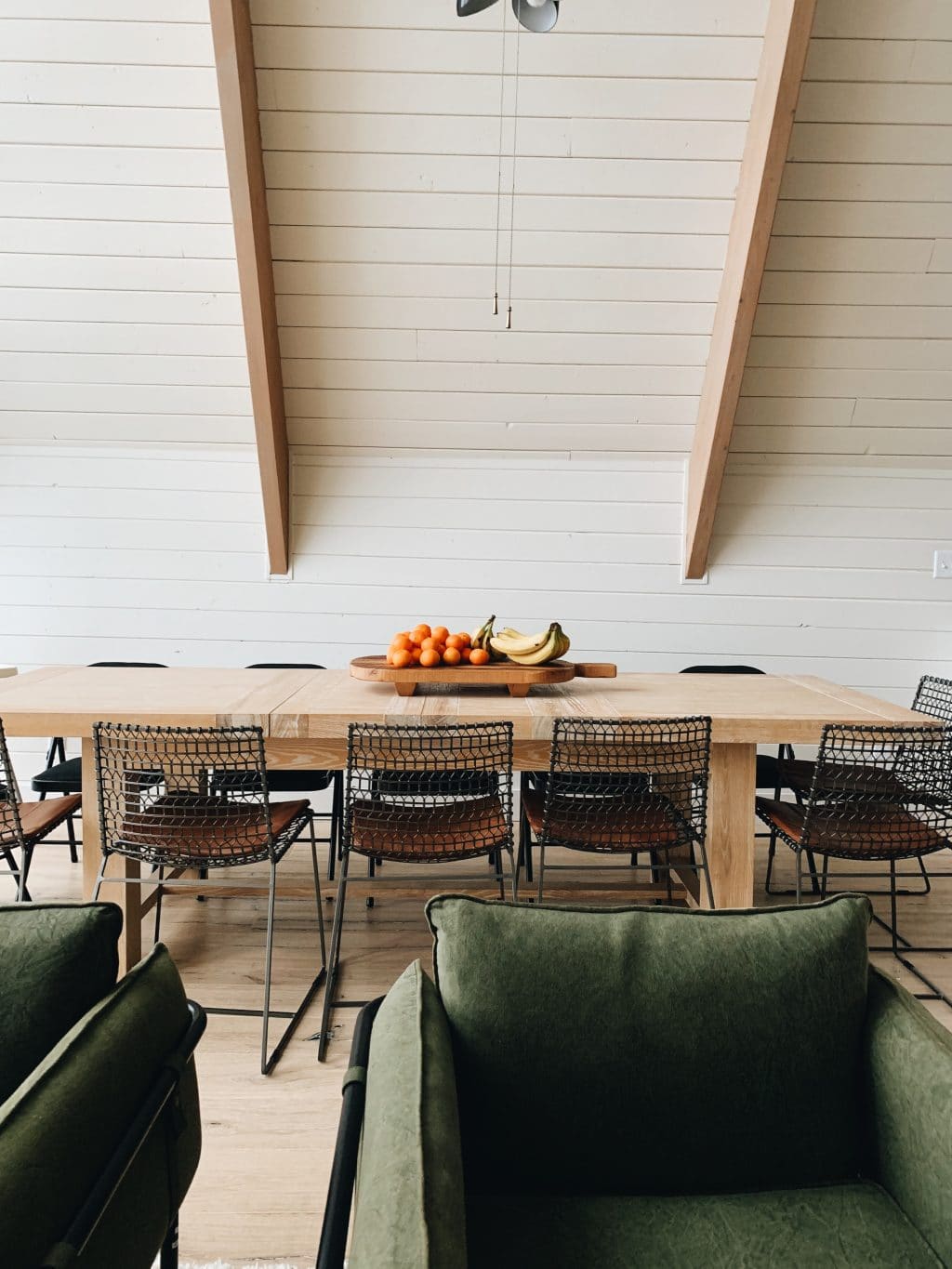 4. The Dining Room Chairs-– We are in love with these chairs. Despite tripping on the backs a dozen times and the leather pads getting pulled off with every pass by a cute little baby. But, truly everyone has stubbed their toe on the legs that slant back a little too far (including me) and I’m still like–I love them! (Although Chris has threatened to return them) Love makes us do crazy things. On a positive note, they are very comfortable to sit on for long periods of time and I’m determined to find a way to get the pads to stay in place. We thought about doing a built in bench on the other side, but we may do a regular bench instead so people can easily get in and out. 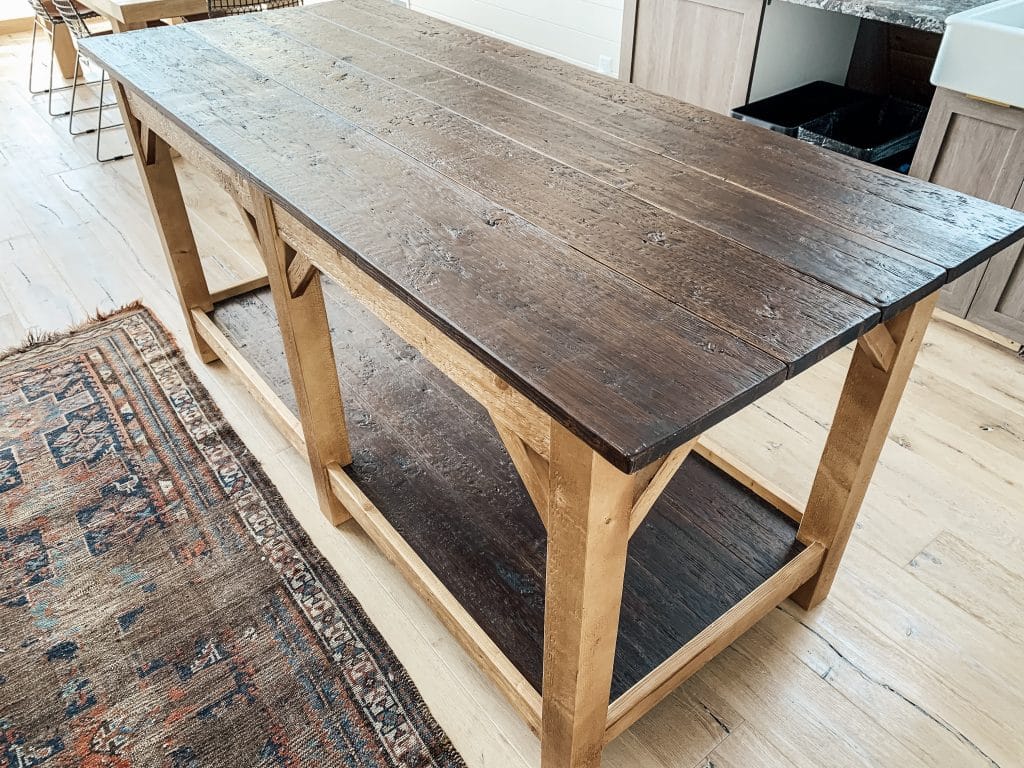 5. The Kitchen Island-– We purchased our current island from etu home at market earlier last year. We were really excited about it, but when it arrived, we knew pretty immediately it wasn’t going to work. Despite it being a beautiful piece, the tones were all wrong. Rather than messing with the island (it’s made from 100 year old reclaimed wood), we’d rather hold onto it for some place in the future and we actually did recently decide on a new island! 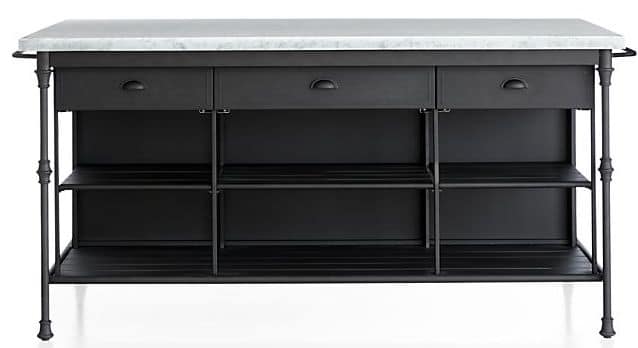 Something we discovered after hosting a few times already is we could definitely use more storage in our small kitchen and even a place for people to casually sit. We ended up buying this island from Crate & Barrel. (I purchased a coupon on eBay and saved over $500 on the price!) It’s a little wider than the current island, but the same width. And it has a few drawers, shelves and an open side where we’ll tuck a few stools. It won’t be here for a couple months, so we’re keeping the current one in place until it arrives.

So, as you can see, although things are in place–most are subject to change. Our current home evolved so much over the years, we never expected the cabin to be perfect on day 1, but we’re so anxious to see it continue to unfold.

For Your Little Homebody »