Appliance Update in the Kitchen!

For years Chris has dreamed of cooking on his very own 60″ range. When we were planning our dream kitchen we knew it wouldn’t be complete without one. Some of you might remember that years ago, we did a kitchen renovation and put two 30-in ranges side-by-side because a full 60″ wasn’t in the budget. It worked amazingly well and was such a fun budget-friendly solution. 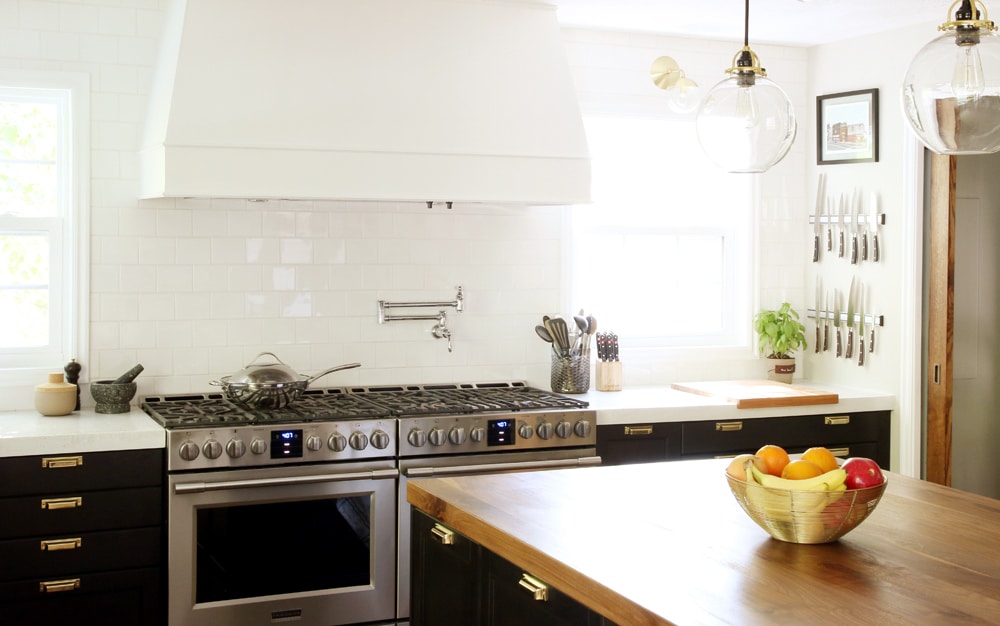 Comparing these feels so surreal! In our kitchen today, we decided to go with Wolf/Sub-zero brand appliances (except our pebble ice maker is Scottsman).  We started our research on which appliances we wanted to go with while still living and planning for a kitchen renovation in Idaho. And got overwhelming feedback to go with Wolf/Sub-zero. Of course, every brand has its fans and foes, but Wolf had a dependable reputation. We ordered the appliances 6-7 months ago and the day the range arrived, Chris parked himself in the kitchen and just beamed at his new range for hours. Watching it get installed, while planning his first meal undoubtedly (it was burgers–Faye’s request btw). 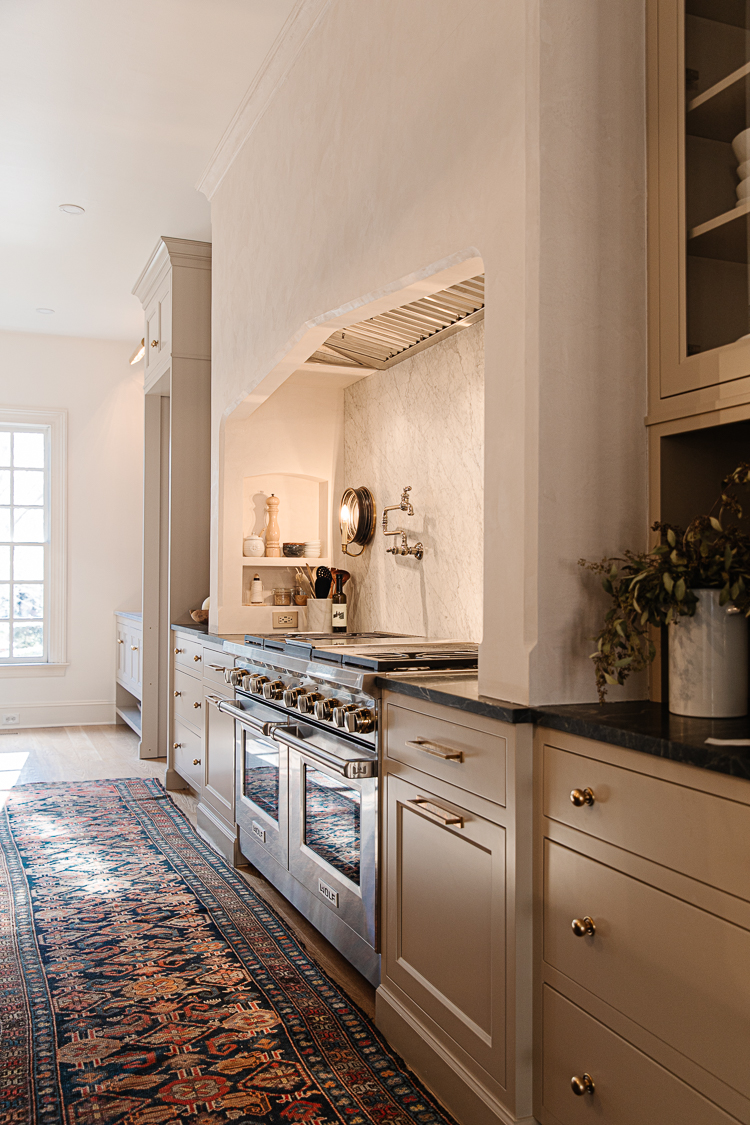 Something you might know about the Wolf range is that the knobs are usually a signature red. We opted top pay extra for the gold bezels. The oven is also gas, rather than a dual fuel (which would consist of a gas cooktop and electric oven). When we were initially comparing ranges the dual was going to take an additional 6 months to arrive. No sense in waiting that long, plus the brass bezels were only available with the gas oven which was something that we thought would be so pretty in our kitchen. 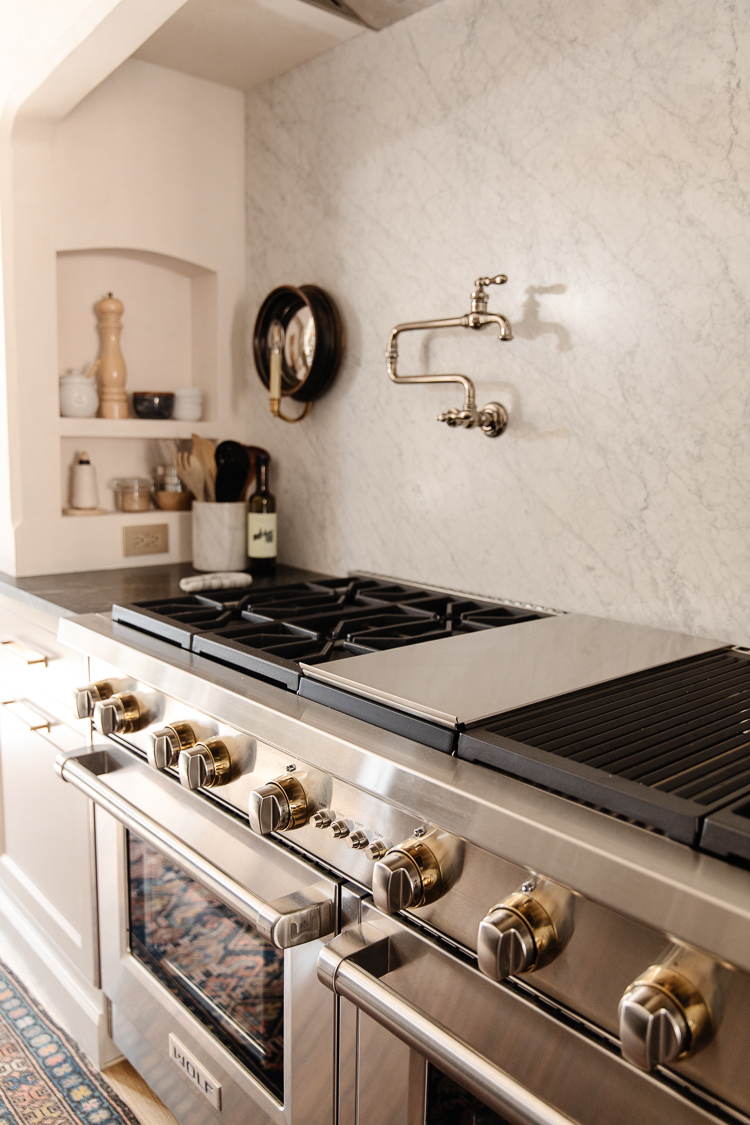 Our two 30-in ranges were actually gas ovens so this isn’t new territory for Chris. Baking can come with a bit of a learning curve, but Wolf has already proven themselves to be reliable, and so far, Chris has no complaints about the oven or cooktops! 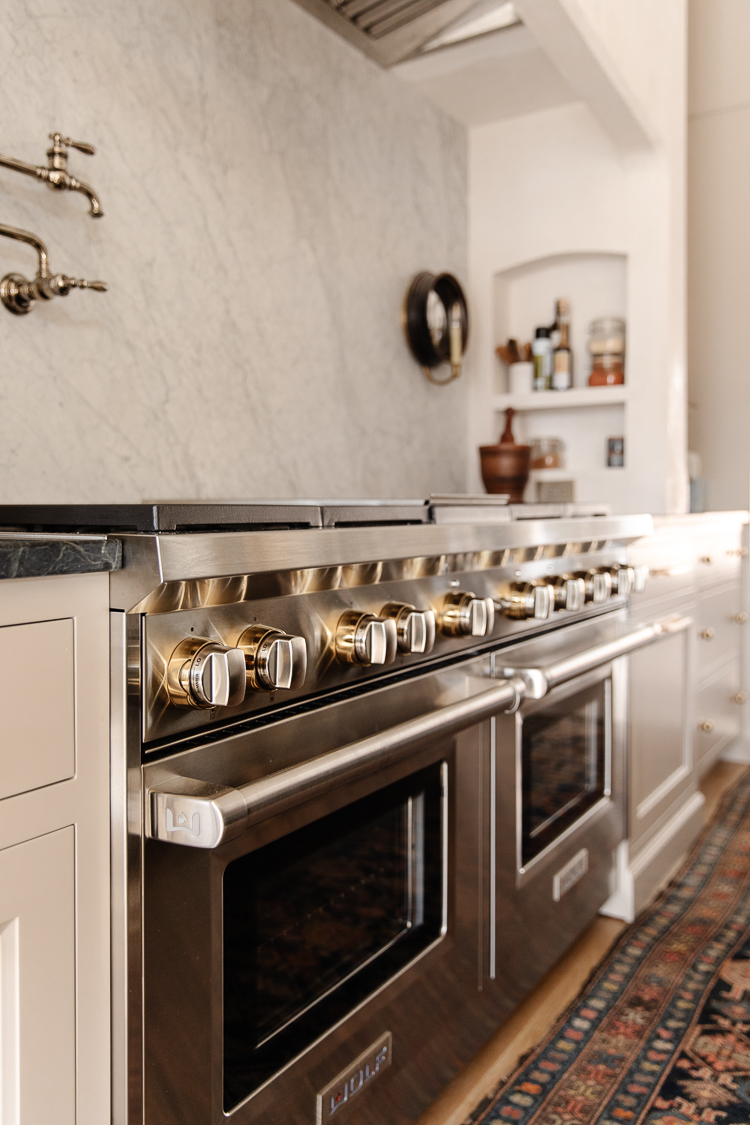 While shopping, there were different cooktop layouts to choose from. Chris knew he wanted a grill (char broiler) and he went back and forth between the griddle and the french top for the other section. Ultimately deciding that the griddle would get more use. All of this along with 6 burners which is plenty! Chris has already been making full use of his new workspace, and I’m just so happy to see his kitchen dreams come true. 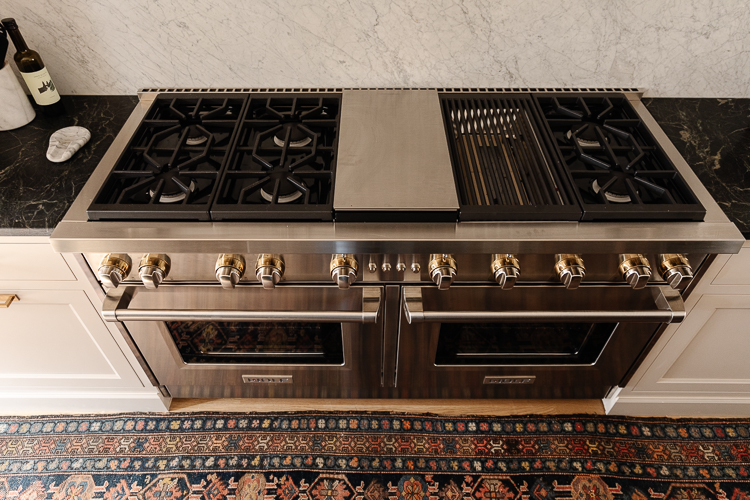 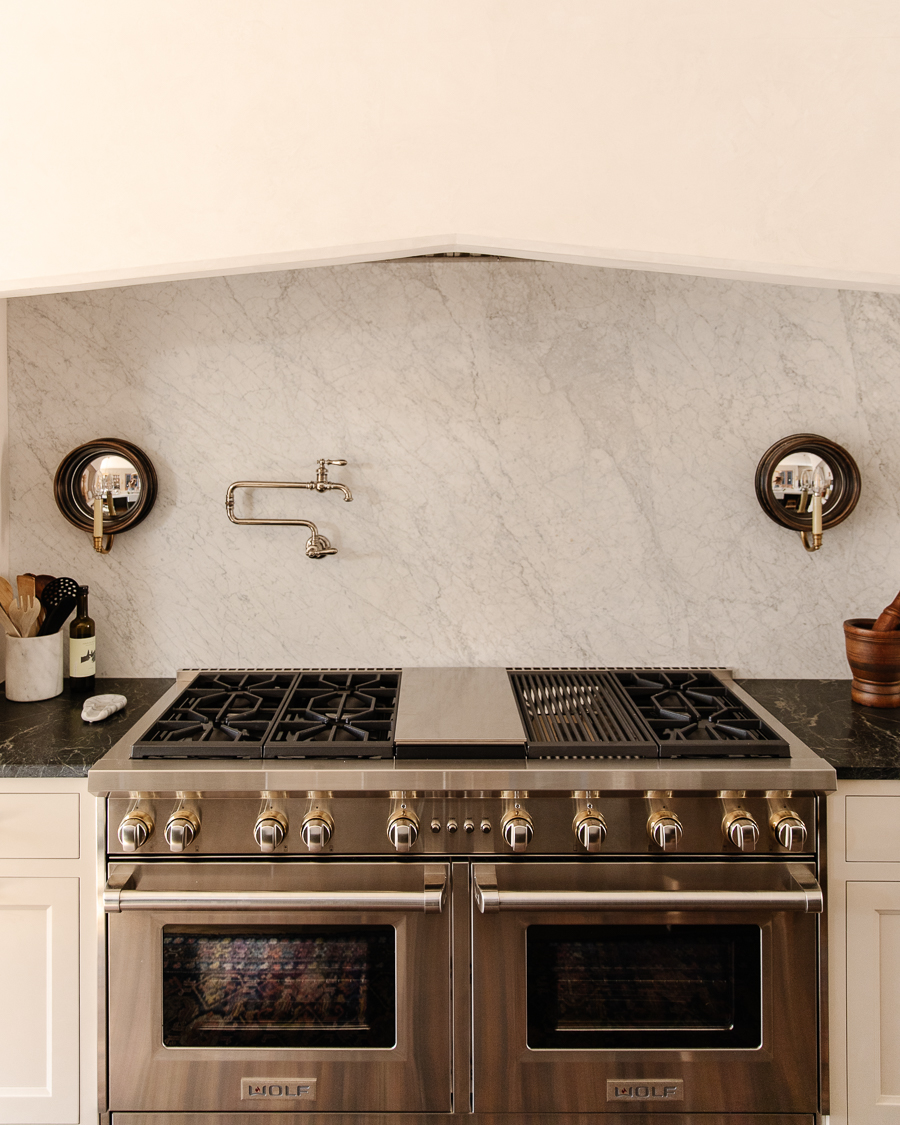 The big exhaust also got installed inside of the big plaster range hood, which was the recommended insert to be paired with the Wolf range. They installed a trunk line that pulls air from the outside so when the fan kicks in it doesn’t create a vacuum affect in the house, making all the doors close. With 1200 CFM, it should be a very powerful exhaust, connected to the garage and out the back of the house. But! After 2 too many fire alarms getting set off, we think something might not be installed correctly. It’s very noisy (so you think it would have a powerful suction), but it’s leaving our kitchen smoky. We let our contractor know and he thinks something with the install wasn’t done correctly so he’s on it and we’ll keep you posted. 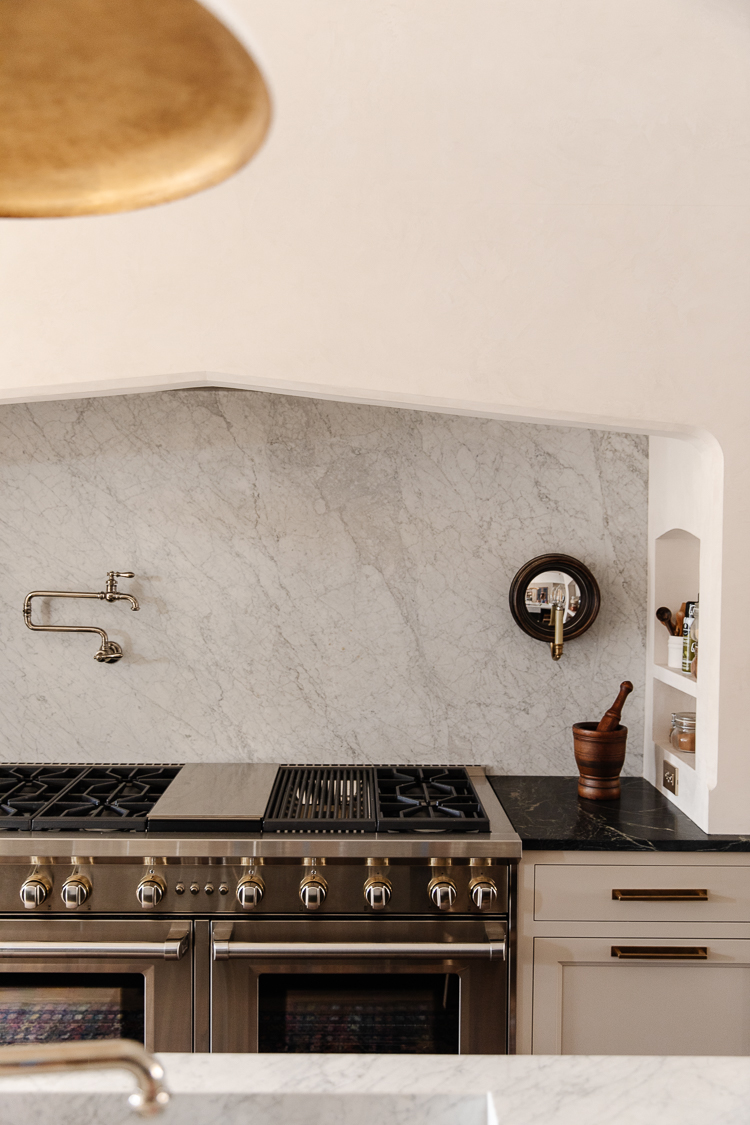 As for the remaining appliances, here’s their estimated arrival dates. So hold your breath…or maybe don’t. It could be awhile. Haha!


I’m definitely looking forward to the dishwashers arriving, 7 months of hand washing dishes is a little exhausting, even though our large sink has definitely made it better. As for the other appliances–we’re holding steady with our old fridge still slightly in front of the kitchen windows and dreaming of the day when it isn’t. But, really, the range arriving before everything else feels like the best case scenario. <3

« Deciding On a Paint Color For the Wainscoting in the Study