Answering: What Size TV should I get?! (And how high do I hang it?)

We are unofficially officially dedicating this week to the TV room. When it comes to TV size — bigger is better, right? Who doesn’t want a home theater? Well, let’s pump the breaks.

The general rule of thumb is the tv should be about 2/3 of the width of whatever piece of furniture is anchoring it. So whether you’re setting your TV on a console, hanging it above a credenza, or mounting it above the fireplace, you want “breathing room” on either side. If you’ve got your heart set on a 65-inch TV, you’re looking for a console that’s more than 84 inches wide. Conversely, if you have a 60” console, you’re probably in the market for a 48-inch TV.

When you’re hanging art above the couch, the dresser, or a bed — it’s a good idea to leave 4 to 8 inches of visual space between the bottom of the art and the “anchor” furniture. The same rule applies to a TV! It’s visually appealing for our eyes to see the TV with a handsome margin between the screen and console or the mantle. It seems like easy math to split the difference and center the TV between the ceiling and the furniture or mantle — but if the distance between the TV and the anchor is too large, it’ll look like it’s floating away. 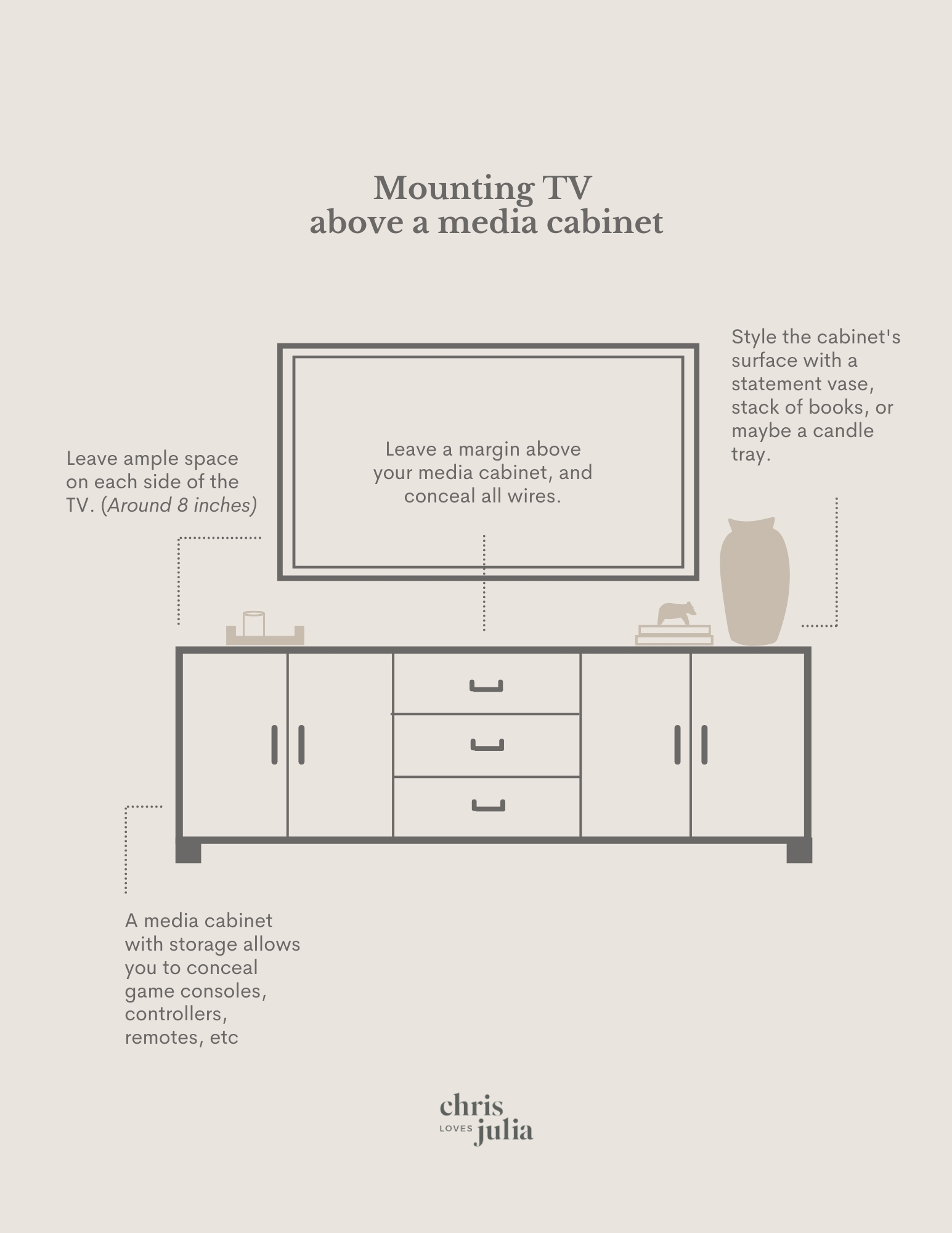 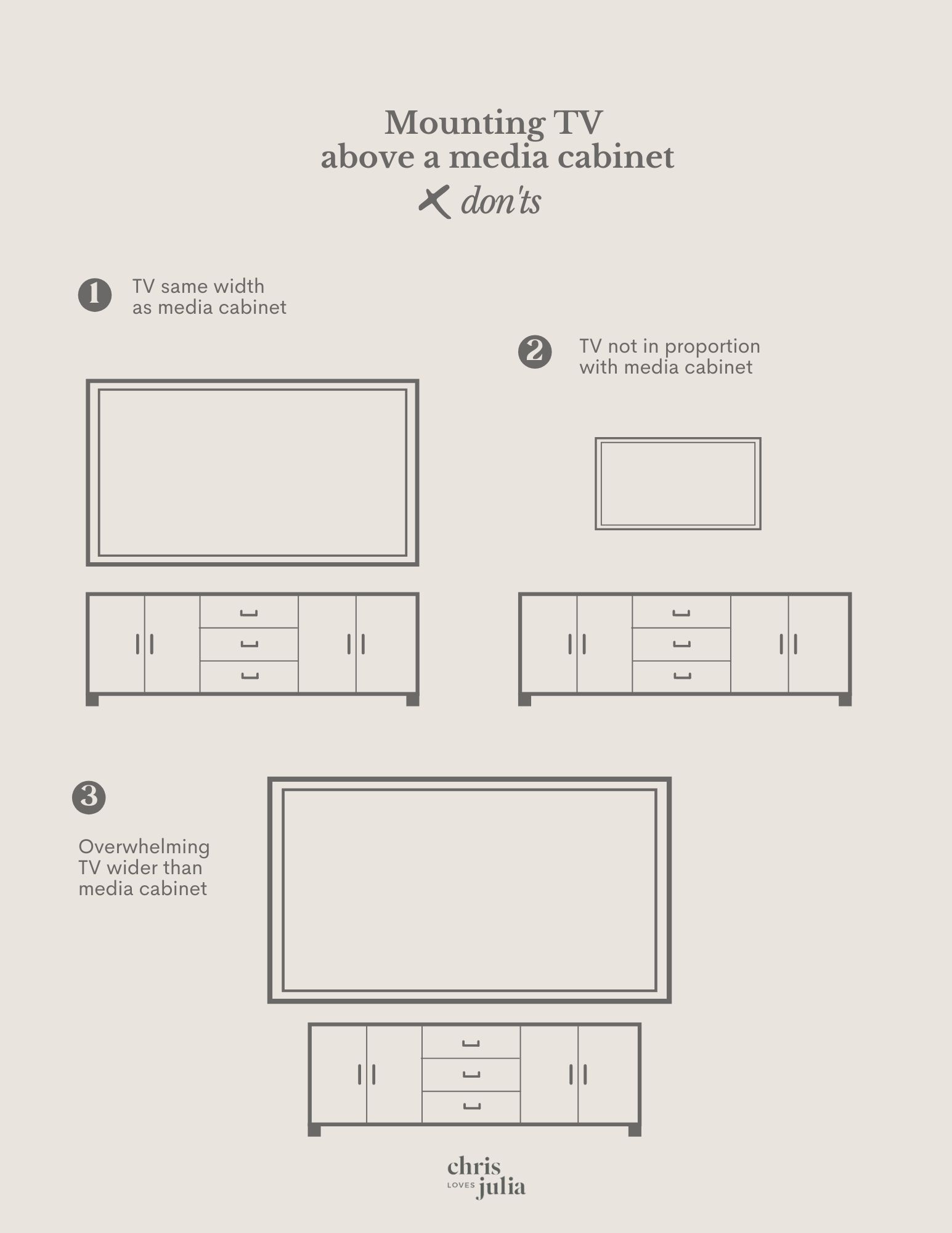 I’m obsessed with how Erin at Frances et Moi hung hers asymmetrically above her low credenza and offset it with some art. Note how the TV isn’t floating midway between the top of the shelf and the ceiling, but rather is grounded comfortably. Also I can tell she shares a pet peeve about cords because she tucked hers neatly behind some painted channeling. 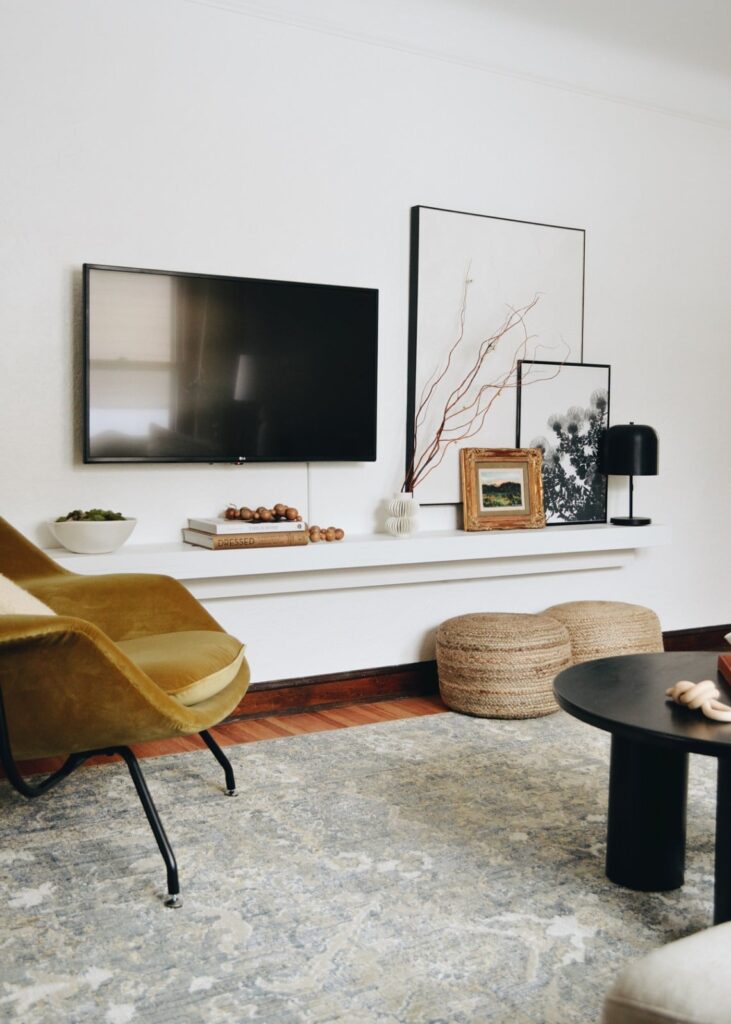 If you’re NOT hanging the TV — but setting it on a console instead — the same width rules apply. But there are ways to “cheat” in this case. You can get away with a smaller TV over a wider piece of furniture hanging art on the wall behind it. Your TV creates a focal point, and by hanging a gallery around it, you’re just enhancing the scene. It’s not really about HIDING the TV, but embracing it and designing around it. 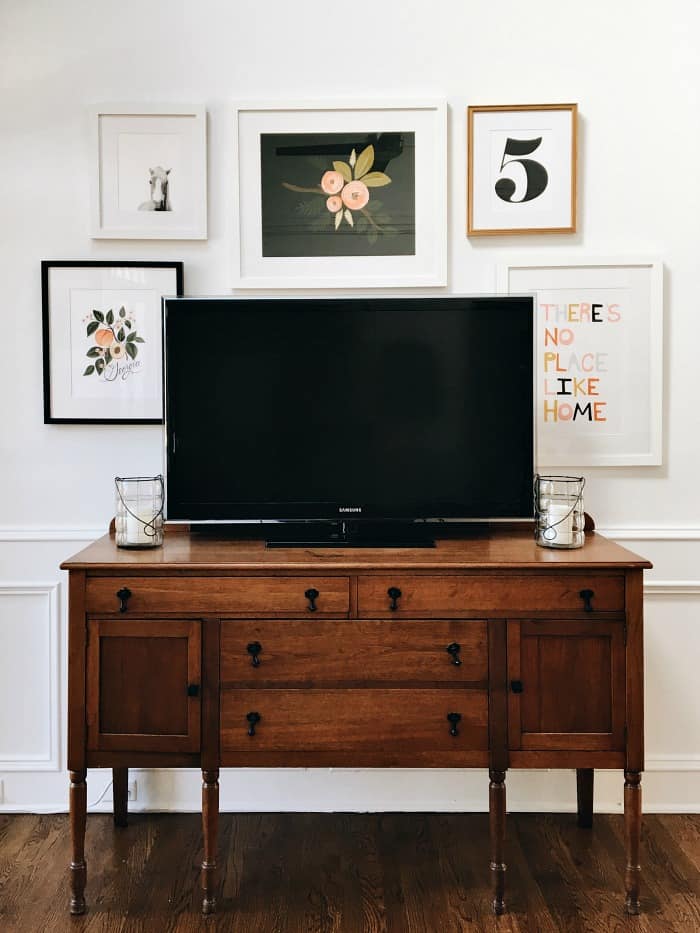 Hanging a TV above a fireplace is probably the most common place I’ve seen it hung, and it’s also where I’ve seen it done wrong a hundred times. Most common mistakes? Using a “too-large” TV, and hanging it too high. 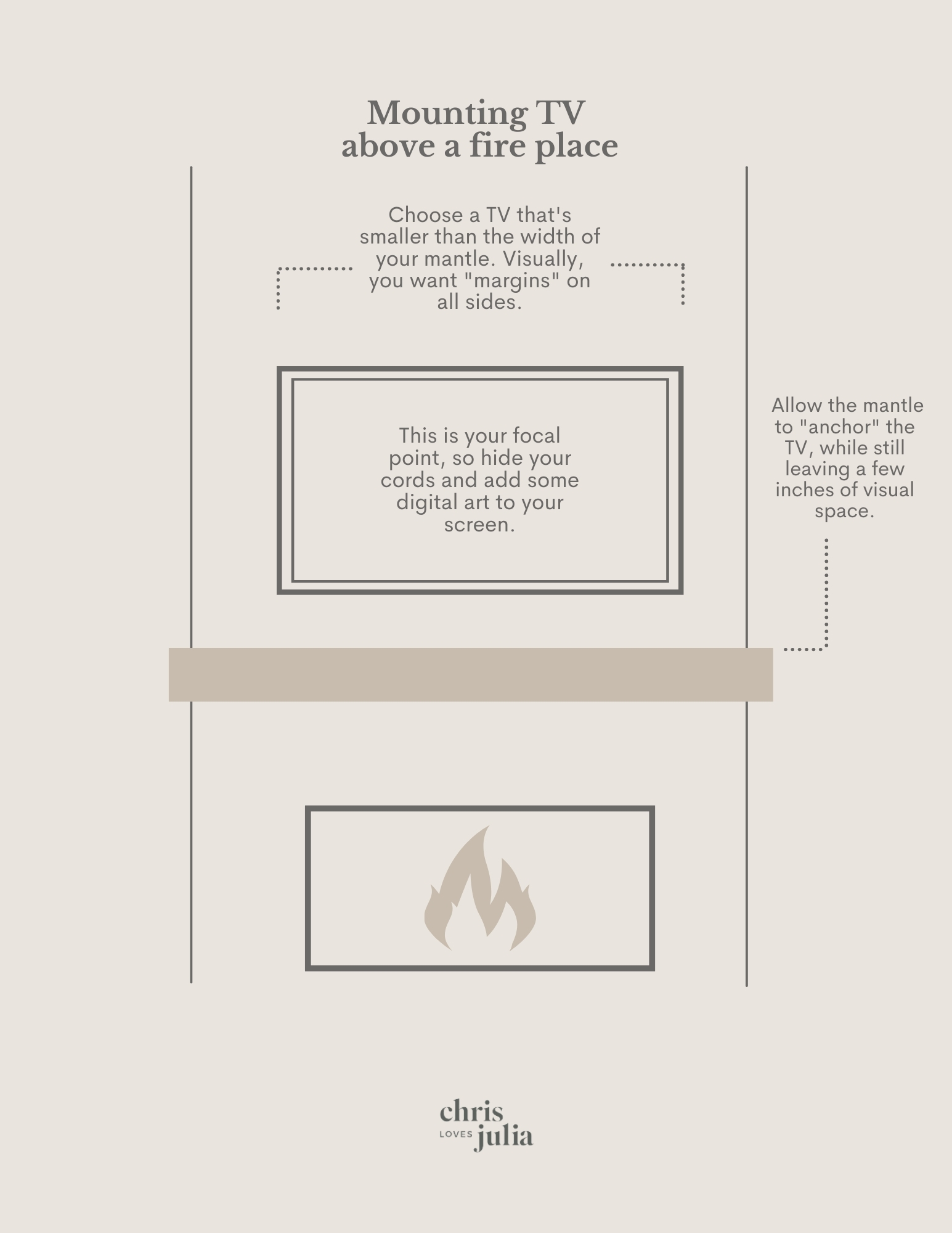 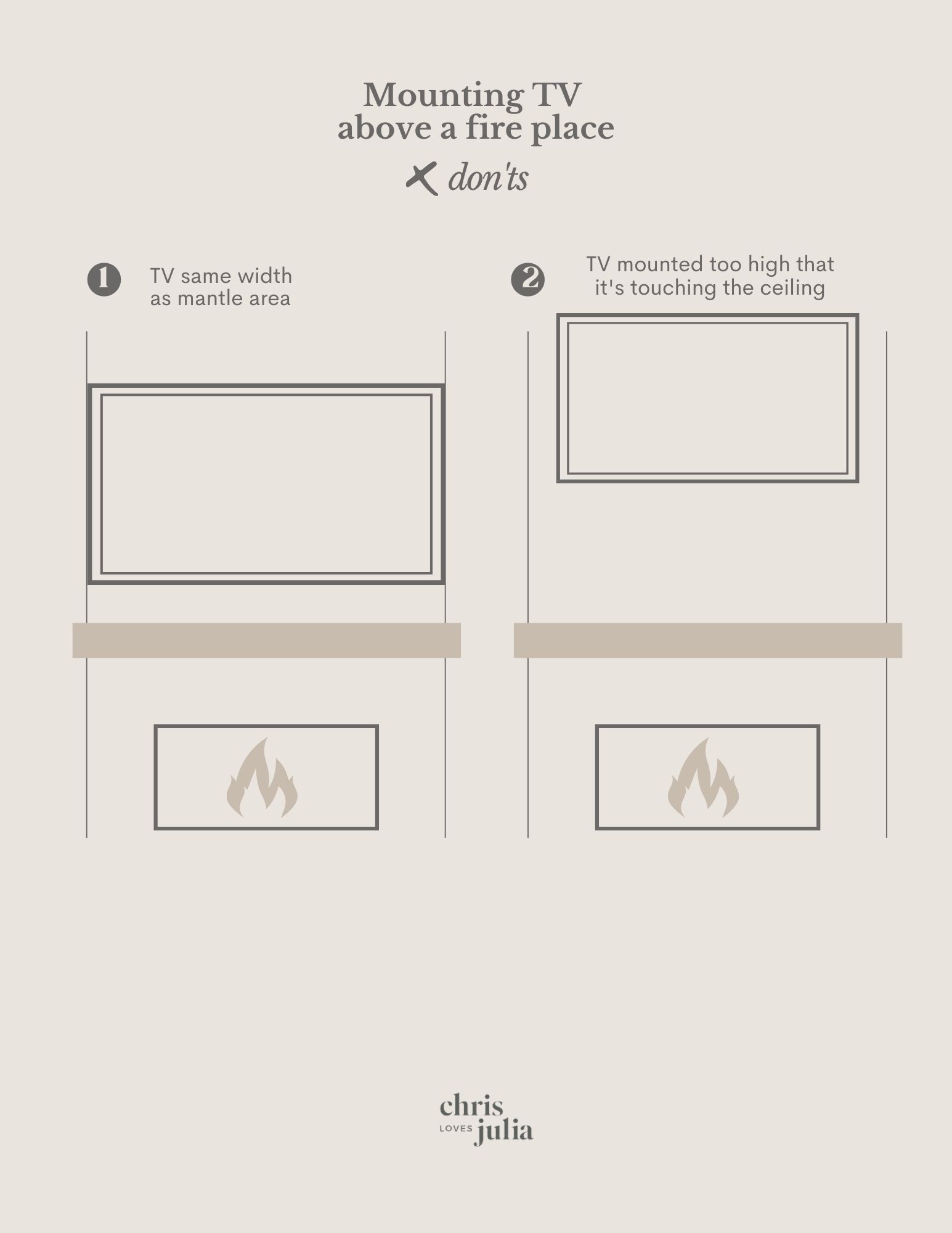 I know it’s controversial, but I’m actually FINE with a TV above the fireplace. Since the fireplace is a natural focal point, I think putting a TV above it is a okay — with a few do’s and don’ts.

Amber Interiors did it so right by using a smaller scaled Frame TV in a tighter room and not centering it between the top of the mantle and the ceiling. Instead, it’s floating comfortably above the mantle with breathing space on either side. So classy. 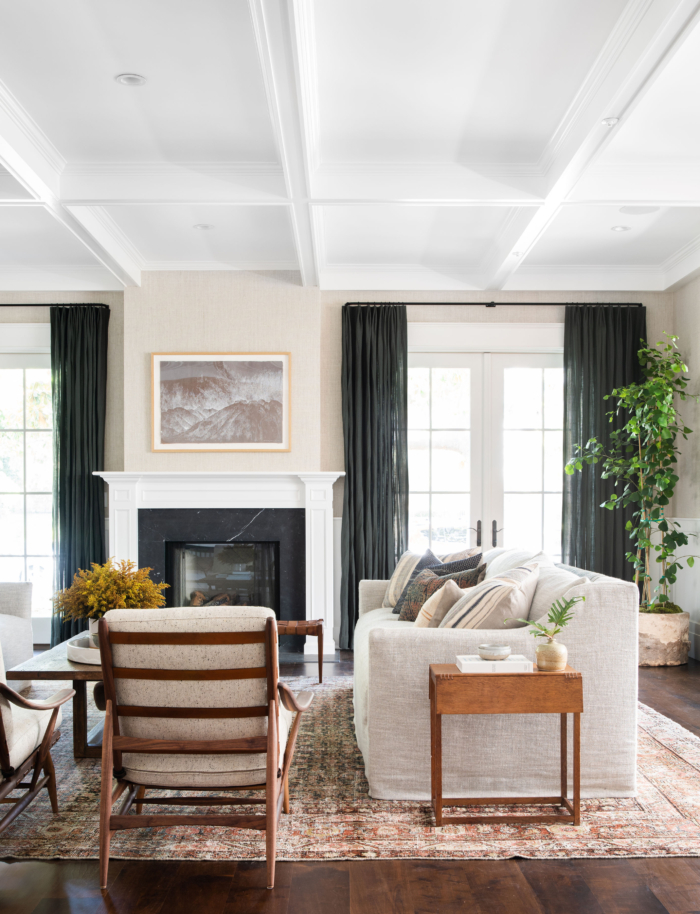 Studio McGee is another great example on how to place a TV above a fireplace. Shea left a smaller gap between the mantle and tv, but in this case I think it works so well because of the scale. I also love how the height of the TV is aligned with the top of the cabinet so my eyes can move across the room effortlessly. 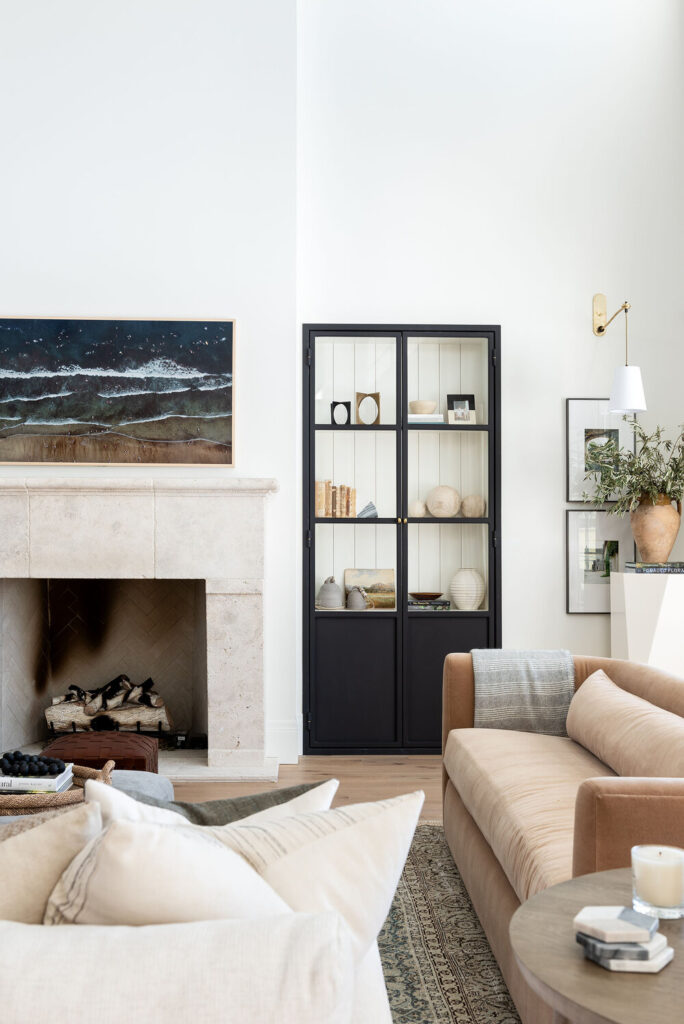 I’ve already concluded that our TV is hanging a little too high than where it should be in our bonus room. In hindsight I think we were trying to hang it as high as possible because it already felt low to the ground, rather than embracing the lowness. So when we move the outlet to a more discreet place, we’ll lower the TV to a more comfortable height.

Hopefully these tips help you when placing your tv!! We all have them, might as well help each other make them look better. :)

Media Consoles at Every Size and Price Point »