6 Lessons We Learned From Renovating the A-Frame

Today marks one month since our beloved A-frame caught fire and burned down. I’ll never forget that morning, Chris just got a new truck and was driving Greta to school (as usual) before heading to the gym. It wasn’t five minutes after he left that he called, with a shake in his voice and told me that everything was going to be okay, but (and I thought for sure he was going to say he got in a car accident and the new truck was damaged) but, no the cabin was on fire. How I wished it was the truck!  A mechanic working in the area tried to call Chris (but he ignored it since he was dropping our daughter off) and when he looked down at his phone afterward, he saw he received 2 texts–videos of the cabin on fire with a note “Call me!”

Strangely, it was in a way harder to look at those videos than to actually see the cabin in ashes when we arrived. I think I just couldn’t process it through pixels on a screen. Or maybe it was because the fire was mostly extinguished. Or because disbelief played a large part in the hysterics, or there were so many brave people working to put the fire out–that I wanted to be brave, too. Fortunately, time heals. Over the last month we have, of course, taken time to grieve but we’ve also reflected on everything we learned from renovating our A-frame over a relatively short time period–the take-aways! And these we’re applying to all future renovations and sharing so you can, too: 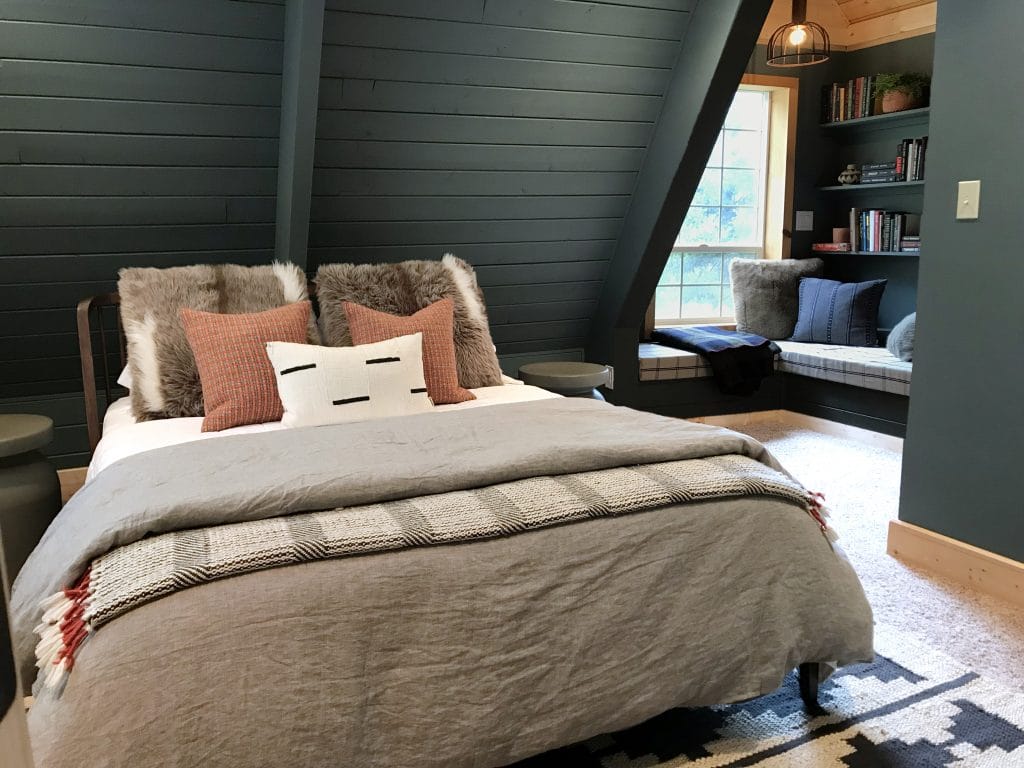 1. Once you know your style–it can translate into any type of home. Over the decade since we’ve been doing this, we’ve honed our decor style. We love cozy, casual, modern spaces that lean traditional. We love neutrals with lots of dark bold moments peppered in. So when we bought the A-frame cabin in the mountains, surrounded by woods, across from the lake…what would that look like!? Turns out, it looks just like you except if you were going to the mountains in the woods with a lake nearby. Plaids, antlers, leathers, warm woods, fire, stone, lots of layers and pendleton blankets! If you think about it–your personality doesn’t change when you go to the beach, but your outfit does! This was our first foray into something outside of suburbia, to be honest, and I was pleasantly surprised (and relieved!) to find decor-style me can make it in the mountains, too. (Already dreaming of what beach decor-style me would look like). My advice: hone in on what your style is–pin 1000 pictures and see what they have in common. It might not be as cut and dry as “Modern” or “Mid-century”…because we’re human and we have layers and our homes should, too. 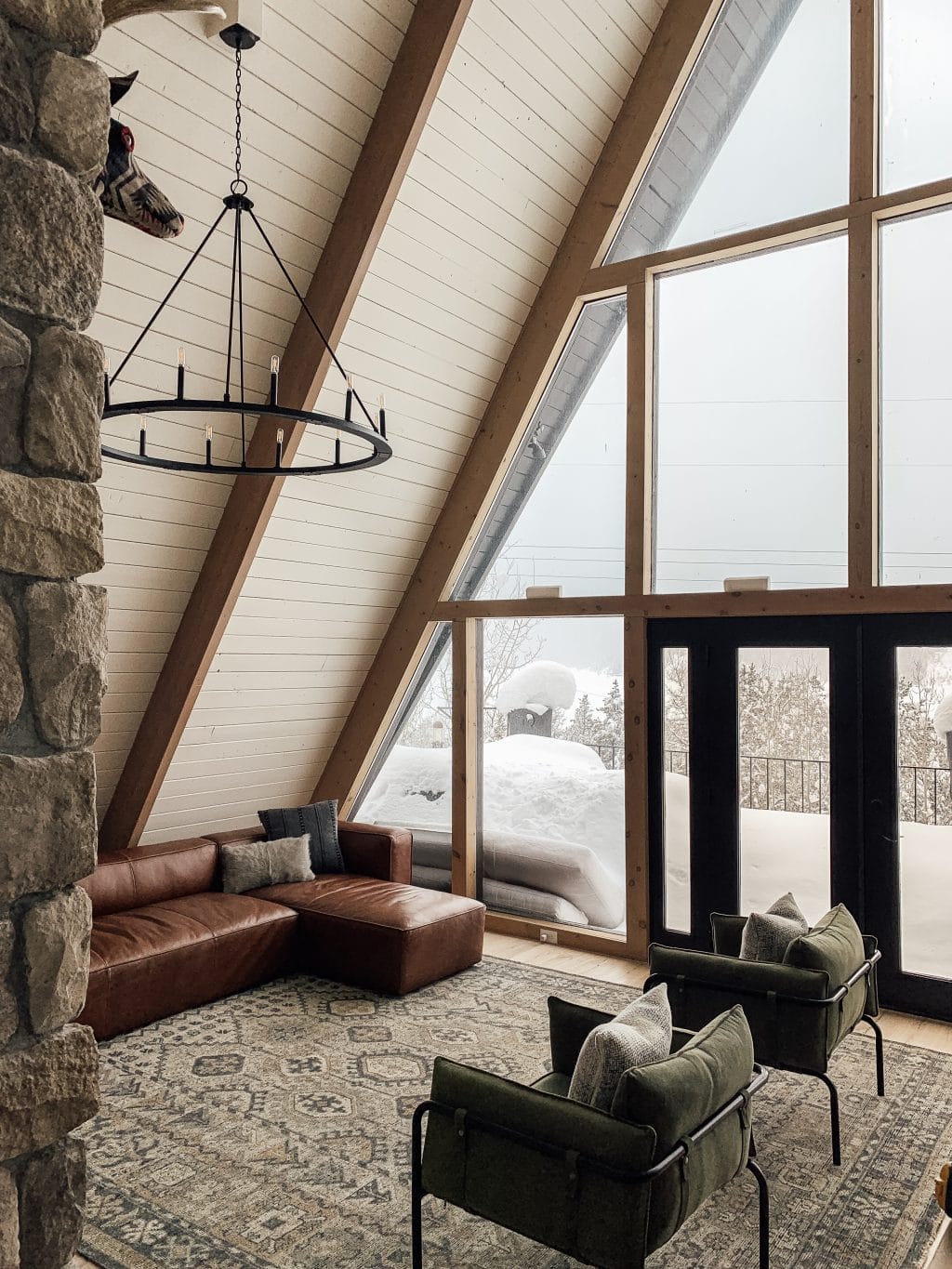 2. Big things make a big difference, but little things can also make a big difference. The thing we spent the most money on was adding an HVAC system to the cabin. When we bought the cabin, it was heated by a pellet stove upstairs and the downstairs wood-burning stove never really worked. It had no other heating and cooling so needless to say, that made a big difference in the experience of being there. Our first winter there, we wore coats for hours inside waiting for it to get warm. Our second winter, we could have it heating up with a touch of a button on our phones on our drive up there! It was a big upgrade that was worth it. Like, so worth it! Adding an additional bedroom and bathroom downstairs–huge and worth it! However, I also remember when we painted the deck doors black, how it almost blew our minds how much better it looked. Or swapped out the ceiling fans for new chandeliers. We put a new shower head in the downstairs shower that made it practically feel like a spa even though we touched nothing else. When I styled a bunch of oranges on a footed tray at Christmas even though there were patchy walls throughout the entire cabin that needed painting. Buying a boot tray so all of our snowy boots had a home that wasn’t our new hardwood floors–there’s so many little, little things that were game changers. I think when we’re in the midst of a huge renovation, it’s hard to think about “What can I do, to improve this situation?” but sometimes it’s those little things that carry you through the next big thing. Look for the little things. 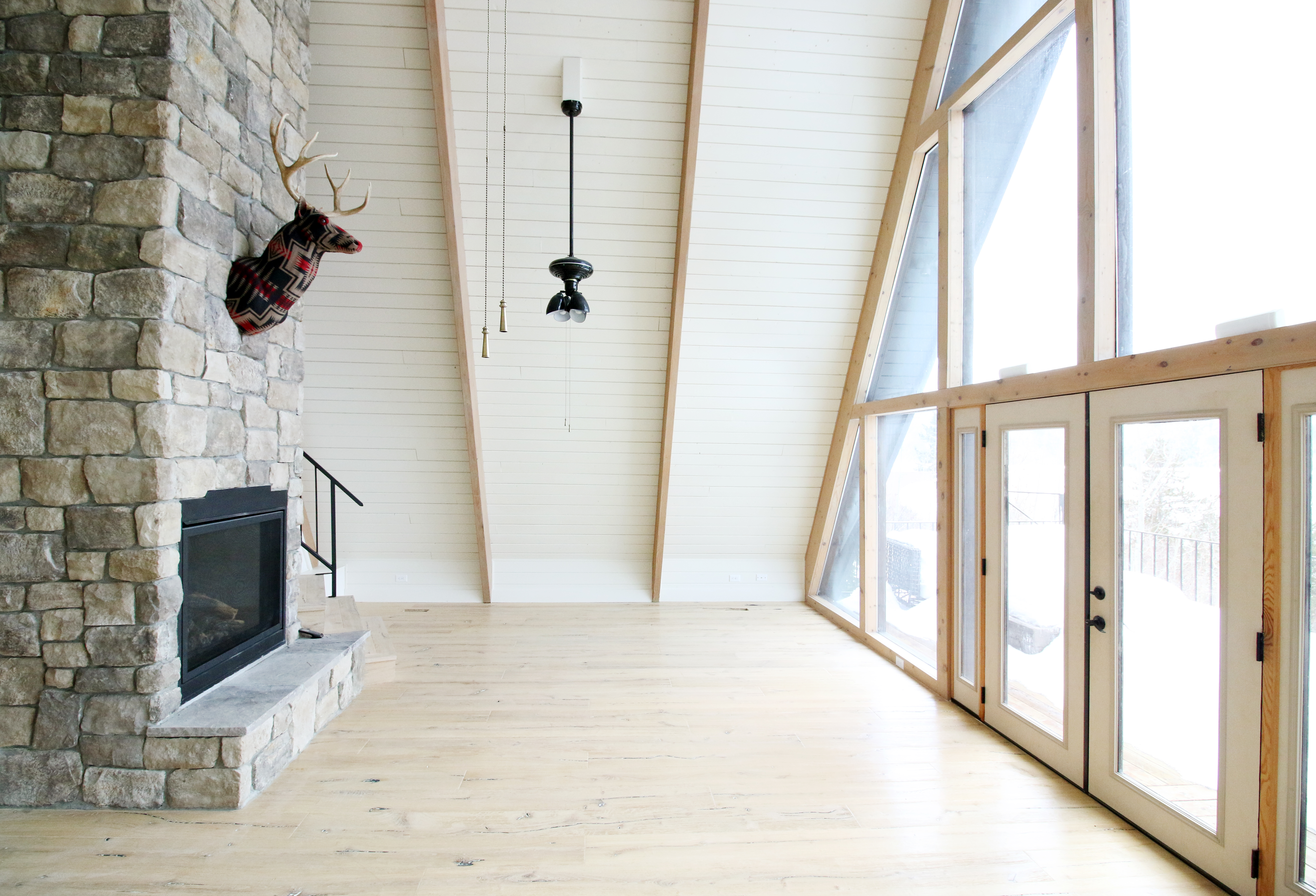 3. You should never live with something you don’t fully love because you are afraid of doing something “permanent.” Both scenarios are “permanent”…and yet neither are. This was the lesson we took away from painting the interior of our cabin white. We hesitated and stewed for so long…for what?! Out of fear, really. Living with something you don’t love, whether it’s a piece of furniture or wood walls or pillows on your sofa because that’s just what you have, and not because you love it, is not worth it. Change it! I’m giving you permission to change it! Or give it to someone who will fully love it, if it’s an object that you don’t want to alter. Allow yourself the freedom and gift to make your home a place filled with love in every way. 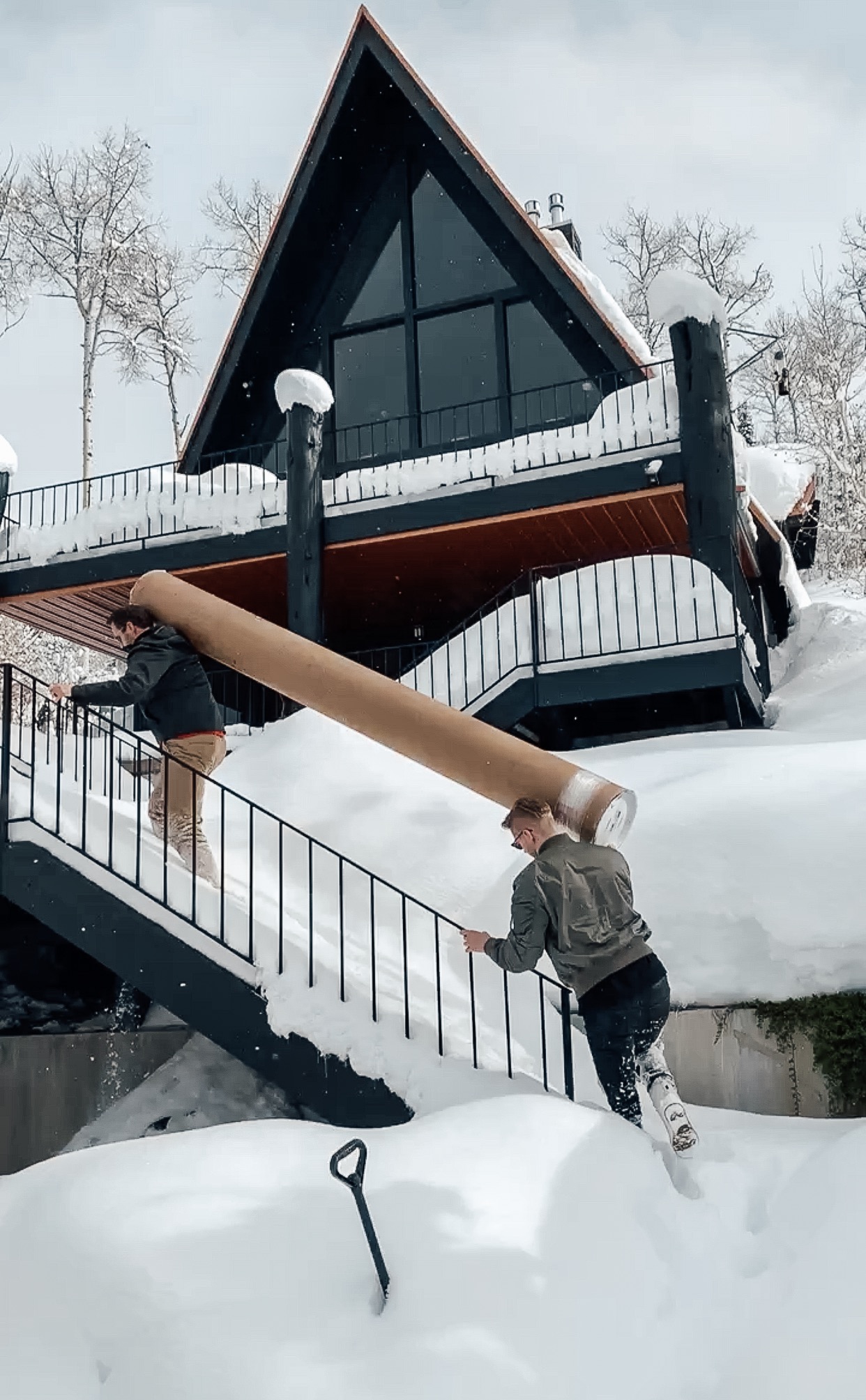 4. Renovation schedules always go over--plan around your seasons. Have you ever heard of someone saying their renovation got done early?? Hahahahhahahahahahaha. hahahaha. Even Chris Loves-a-schedule Marcum gets behind on renovation calendars. Things come up! Things always come up. So when we started in August and were planning on being done by Thanksgiving, we didn’t really account for delays too much. Or the crazy early snow. Renovating on a mountainside in 5 feet of snow is something I wouldn’t recommend. I would have sacrificed more of our summer, started earlier and relaxed harder over the holidays. 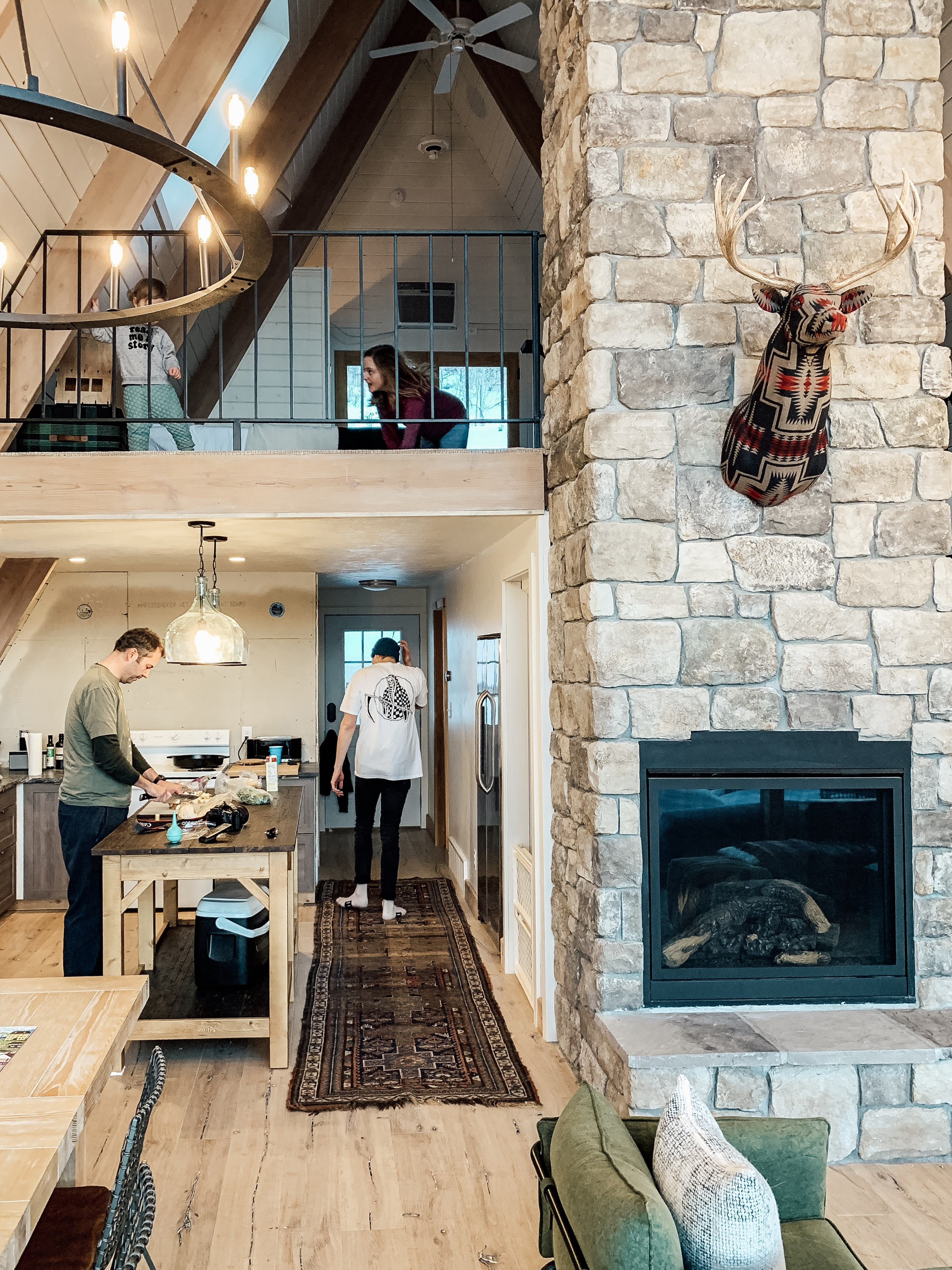 5. Don’t wait to make time for fun–Even though we were renovating for most of it, as soon as the floors were in, we started having family and friends over for dinners, sledding, games or just escaping for family overnights amidst semi-patched walls, a lack of appliances and not Instagram-worthy spaces. After all, it’s those memories we made in all the in between moments we get to keep forever

6. It’s your house–so ultimately, you’re the boss! There were two instances I can think of, both with the interior and exterior painting we hired out where the crew tried to sway me to do something I didn’t want to do–either for convenience (this color is close enough, right?) or preference (I wouldn’t do that)–ultimately,unless it’s  going to put the structure of the house or your safety at risk–YOU GET TO SAY WHAT HAPPENS. I have worked with mostly wonderful contractors over the years, so it always surprises me when I get talked down to or dismissed in my own house by someone I am paying. I’m someone that generally runs from confrontation, so I get it, it’s uncomfortable to say, “That’s not the color I decided on” or “Was that approved before you started?” or “This part doesn’t look right.” But in the end, you’re the boss. It’s your vision that you’re paying this person to help bring to life. So if they aren’t actually helping you do that—take back control of your home (don’t pass it to your partner to talk to them–you got this!) and make sure you’re getting exactly what you had in mind. 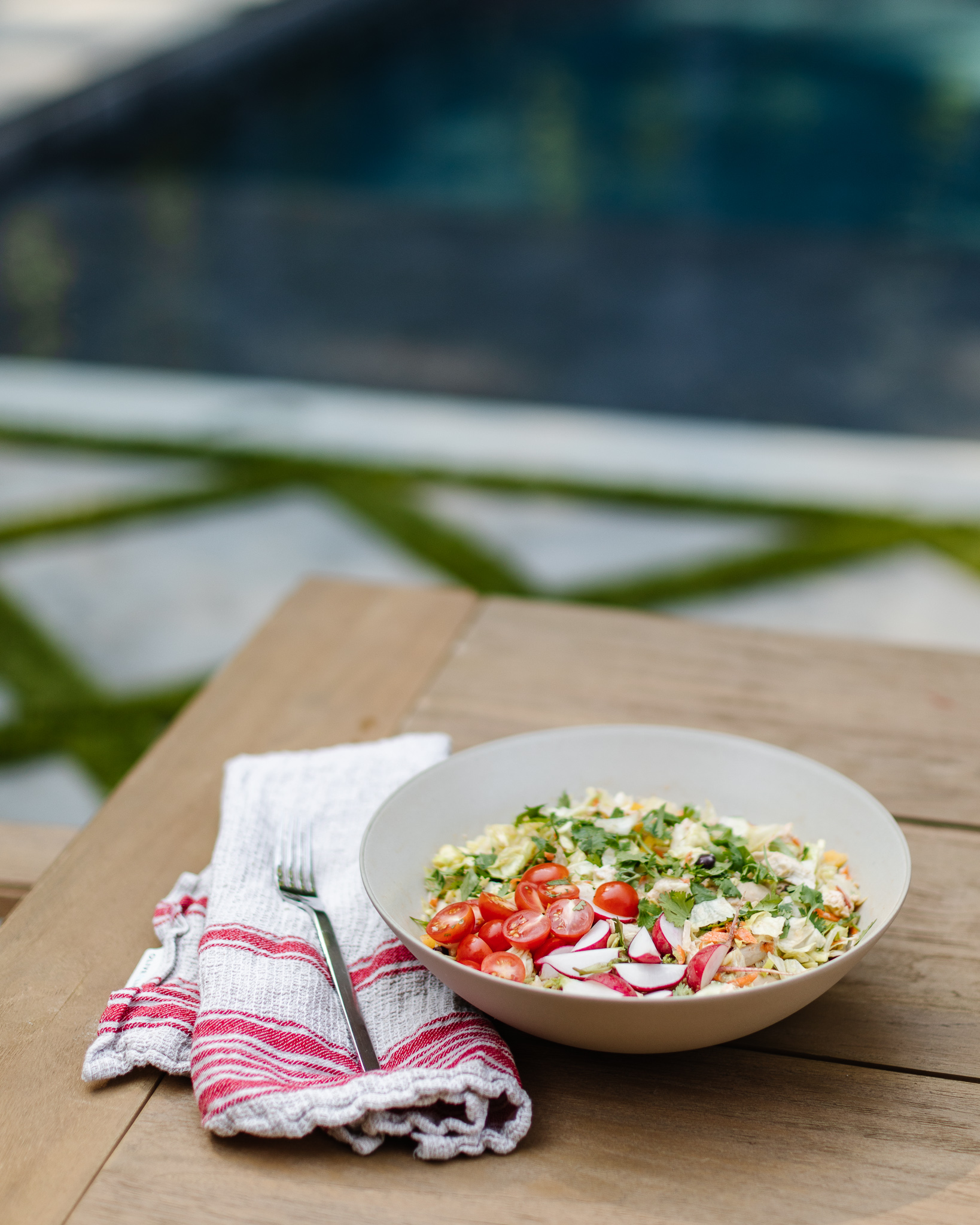 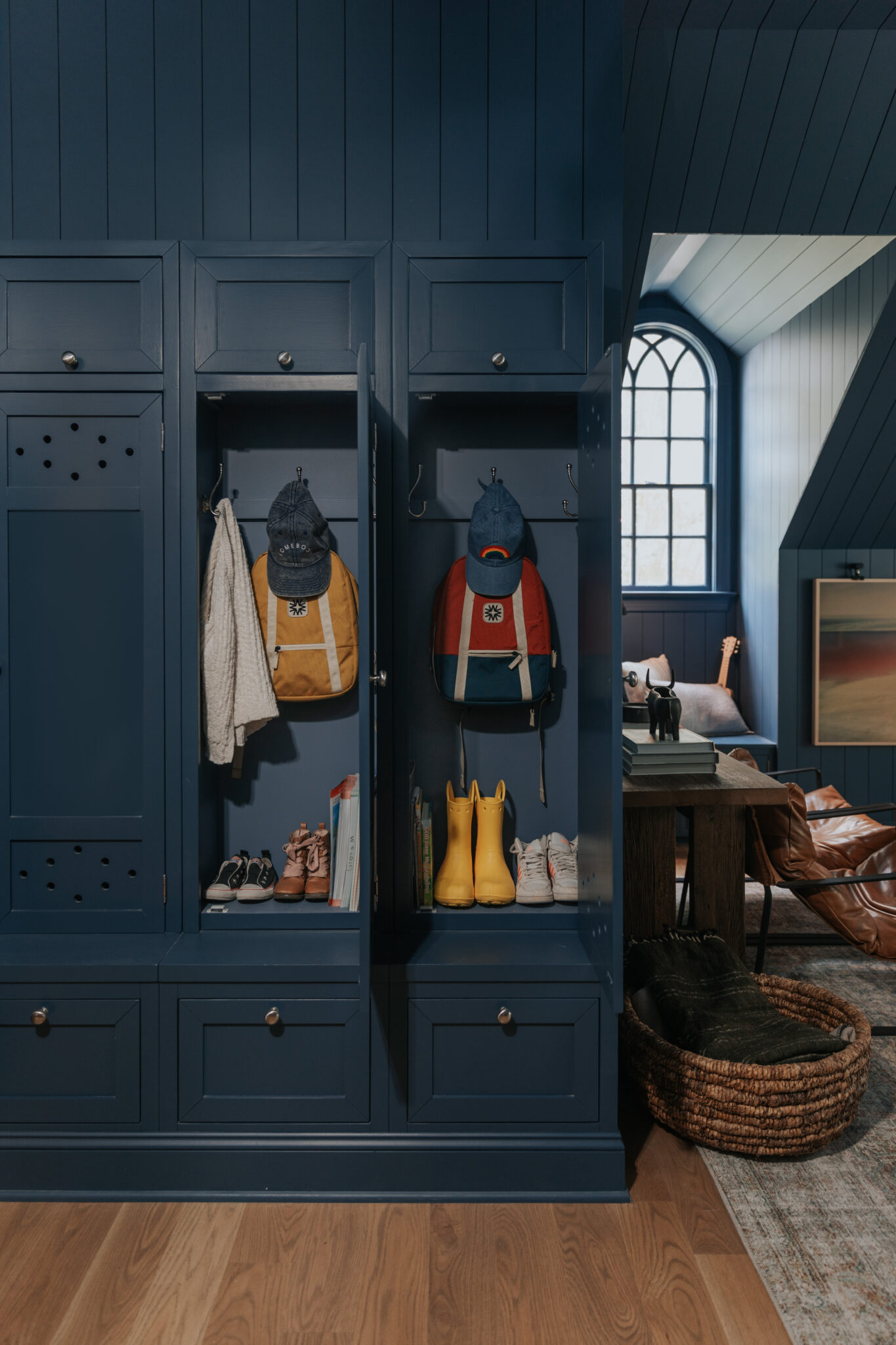 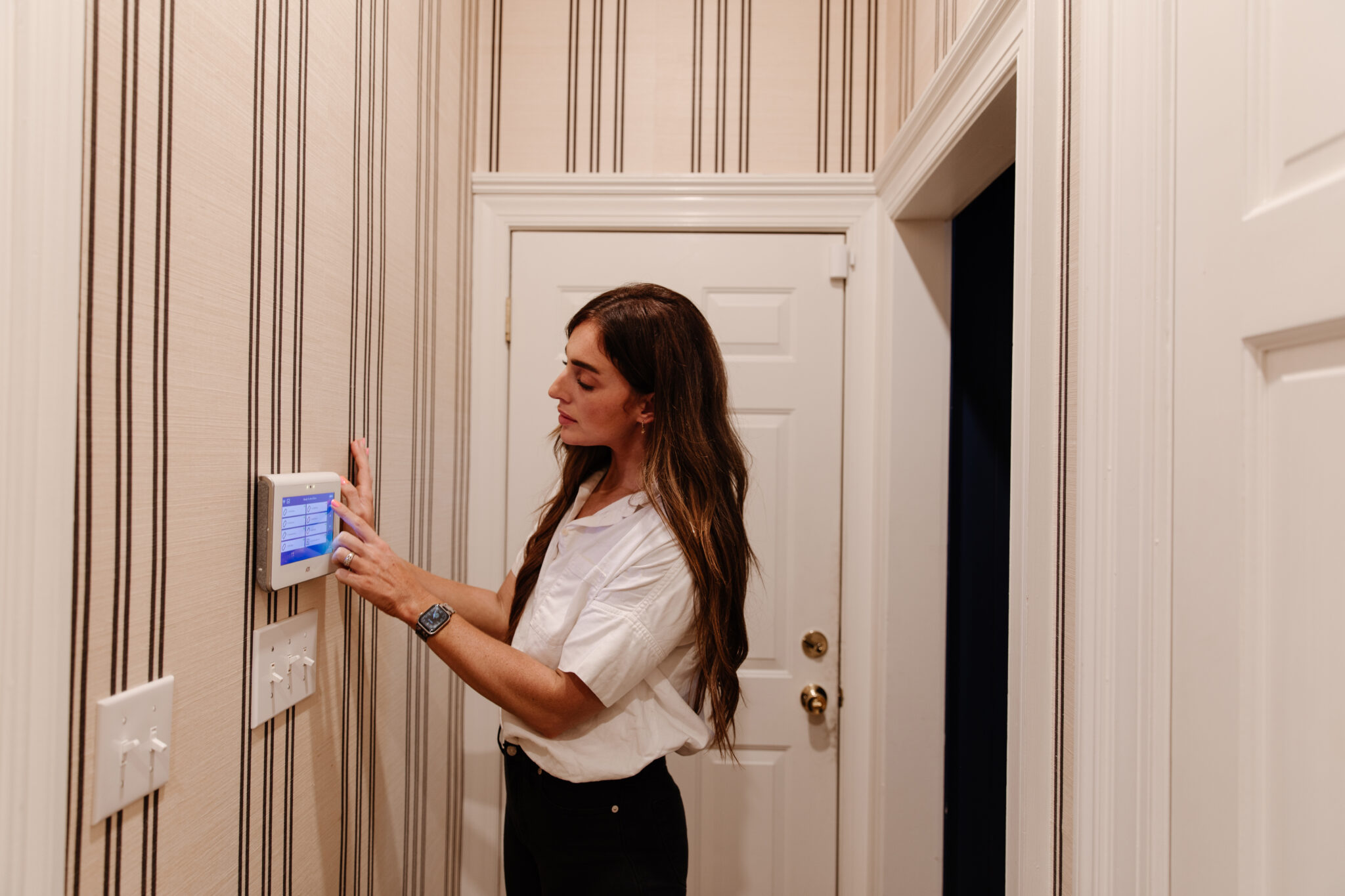 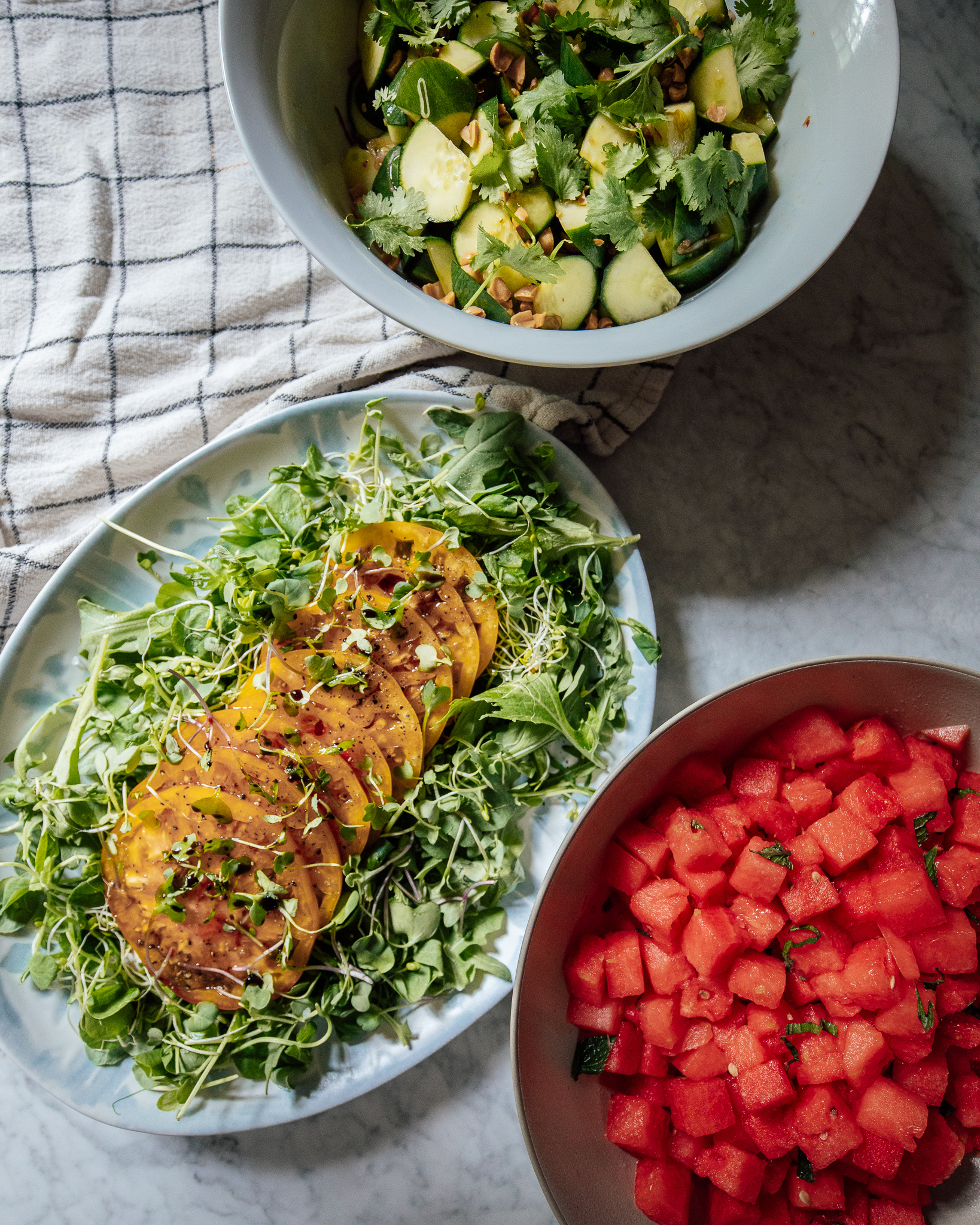 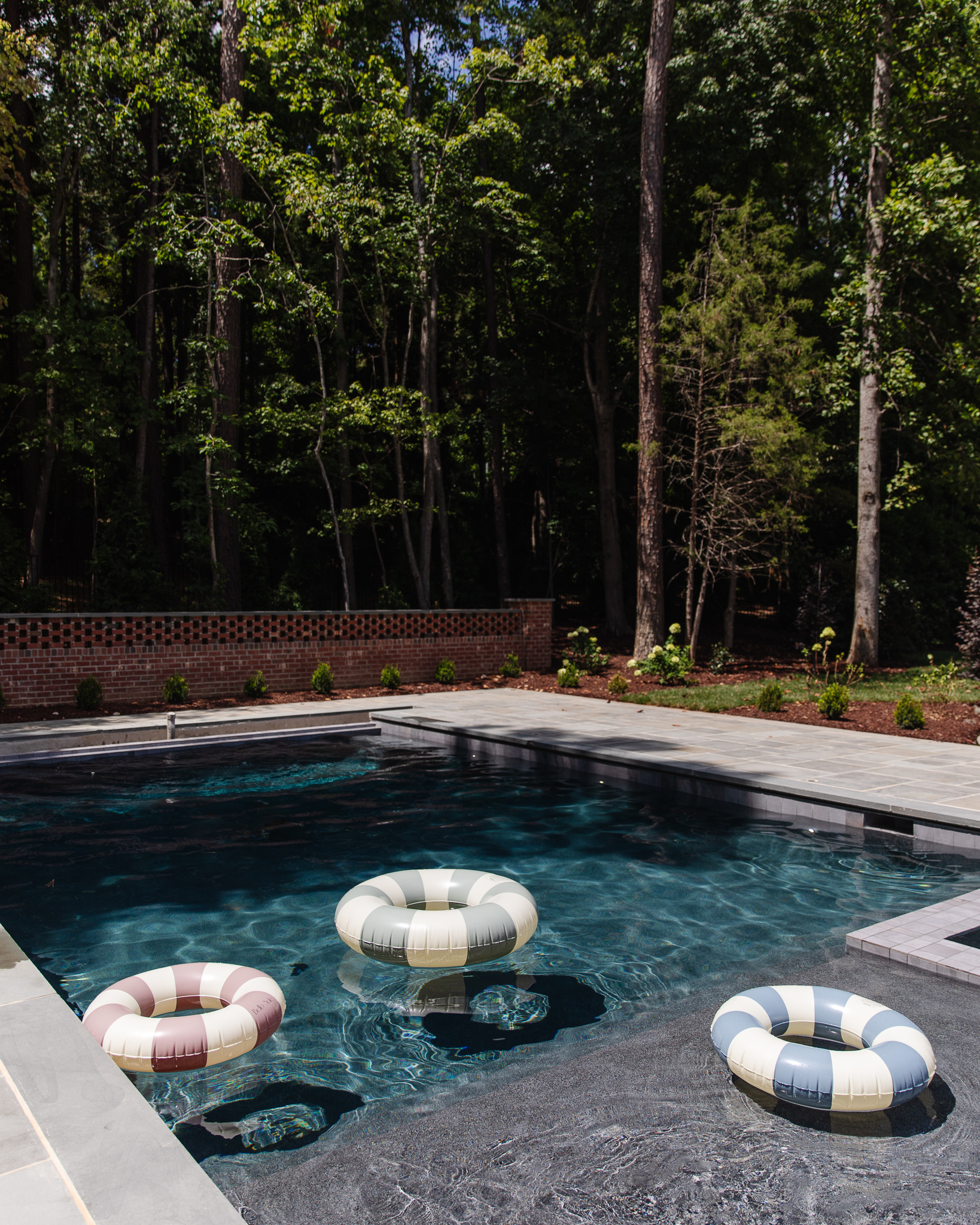 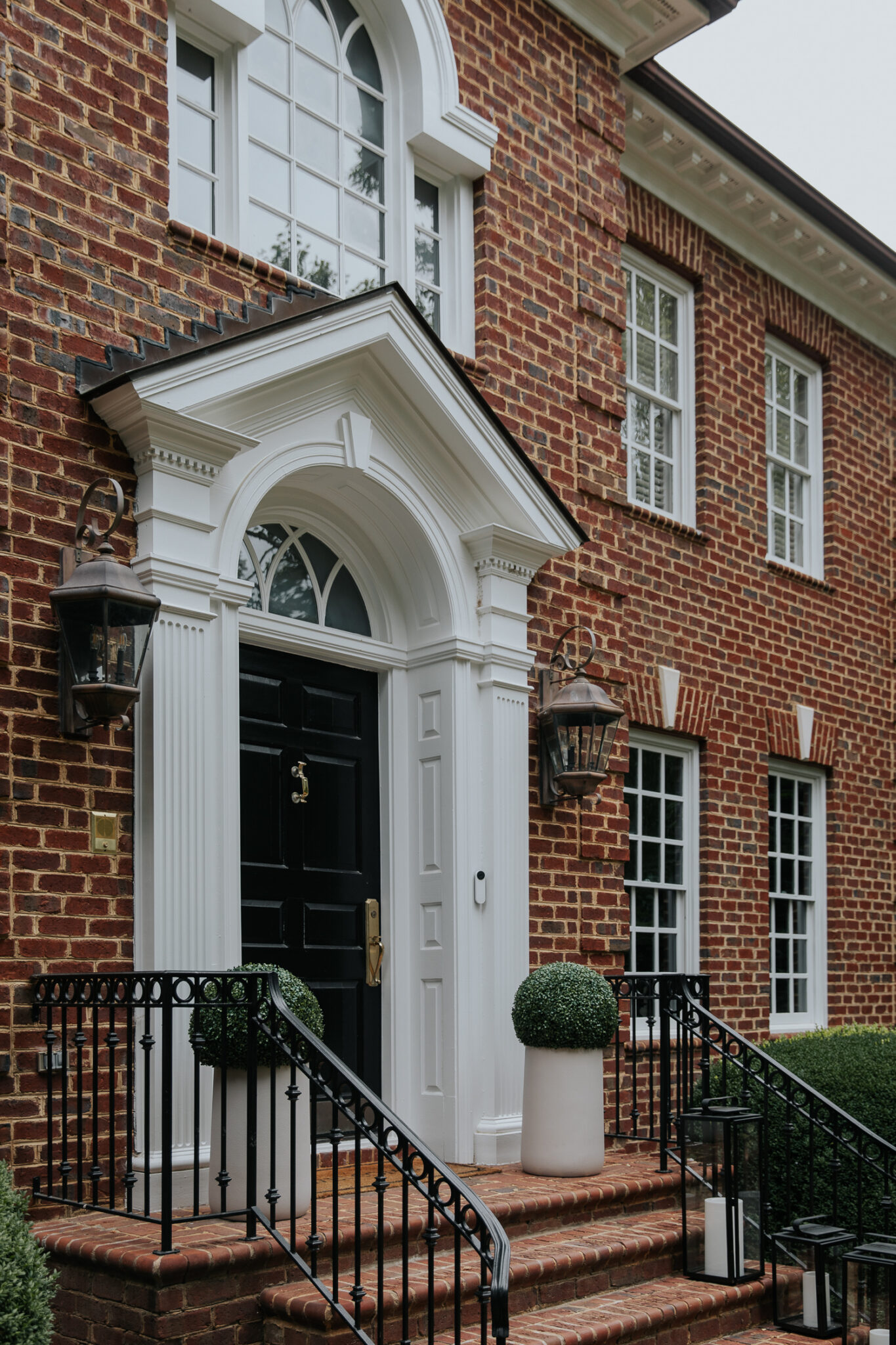