Or, “How to move your ceiling vents”
….orrrr, “Make way for crown molding!”

There aren’t a ton of online tutorials about moving your ceiling vents to a different location (I couldn’t find any–which made this project even more nerve-wrecking), but that’s exactly what we did on Saturday.  With the plans to have built-in bookcases from floor to ceiling and crown molding rounding out the top, our vents 8 inches from the wall weren’t going to cut it. Especially since our bookcases are 11 inches deep.

Chris kept telling me, “We’ll just move them.”  Every time he said that I went into panic mode.  When I don’t know how to do something, or I can’t quite wrap my head around how something is going to work, I panic and get anxious.  Turns out, it was as easy as “just” moving them.  Here’s how we did it. 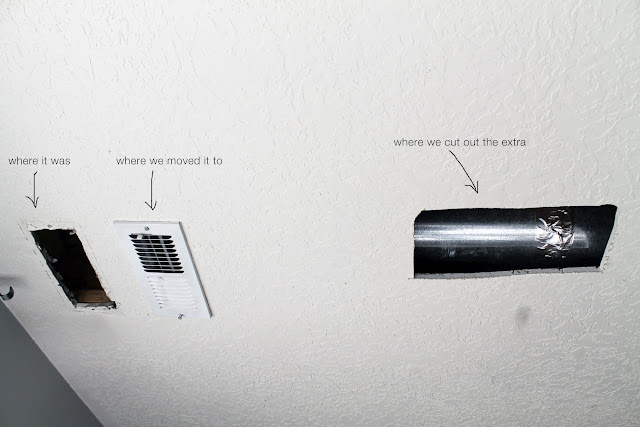 As you can see, we didn’t move it far–just about 8.5 inches, but we had to get that length from somewhere else.  Because the end attaches to a bent piece that allows it to come down and out of the ceiling, we wanted to cut a straight portion of the duct.  We cut a rectangular piece out from the ceiling where we knew there were no addition pipes or wires, measured an 8.5 chunk and cut it out with a metal blade attached to a reciprocating saw.  Once the duct was shortened, we brought the two pieces together and attached them securely with really shiny, heat resistant tape.  I am hesitant to say “duct tape” because it isn’t the duct tape that you are thinking of.  In fact, that duct tape is good for about everything but ducts.  Go figure.  The tape we used, and you should use if you tackle a similar project, is in the ventilation aisle, right by the ducts.  You can’t miss it.  Like I said–real shiny.

Now that we successfully shortened our duct and moved our vent in and reattached the cover, it was time to patch those massive holes we were left with.  Because we also tackled our recessed lighting ourselves over the weekend (more on that later this week!) patching holes was the name of the game on Saturday.  There were a few different methods we used, depending on the hole.  For these rectangular ones, we held onto what we cut out so we could jimmy-rig (first time using that term, woot.) it back up there.

These were pretty substantial pieces that needed more than a little self-adhesive mesh tape to keep the up.  Chris attached a couple shims to each piece of sheetrock and placed it up in the ceiling. 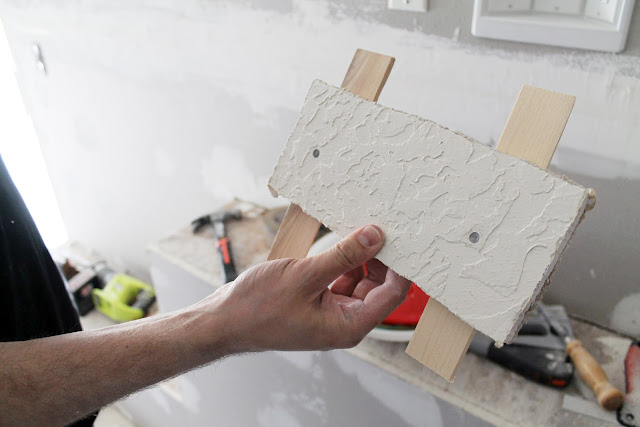 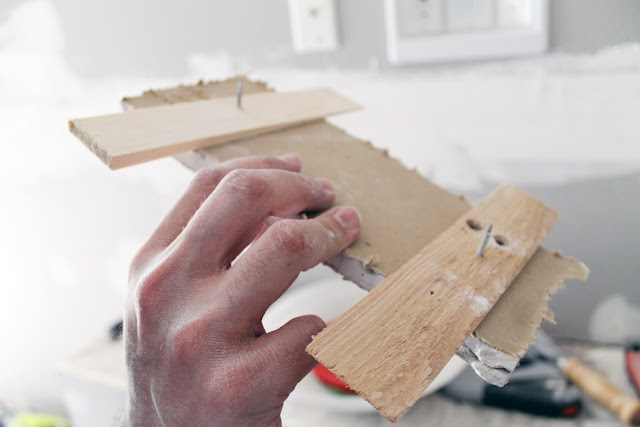 Once up there securely, we broke out the self-adhesive mesh drywall tape and taped around each piece and slapped some joint compound up there. 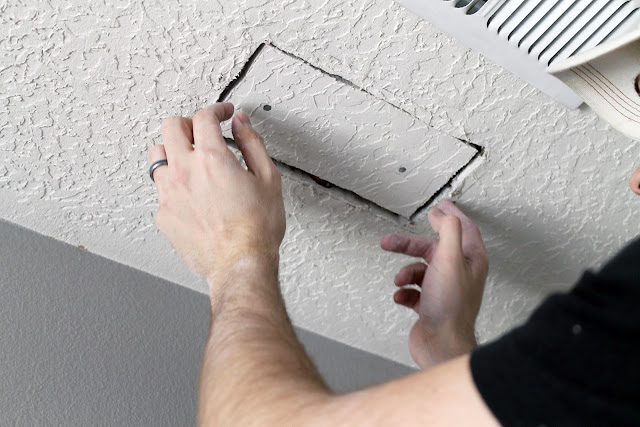 And voila!  It really wasn’t that hard.  My anxiety did flare up a little when Chris had me hold the vent in the ceiling as he hacked it–but I closed my eyes real tight and it was over before I knew it.  Kinda like the whole vent-moving project.  It took an hour.  Tops. 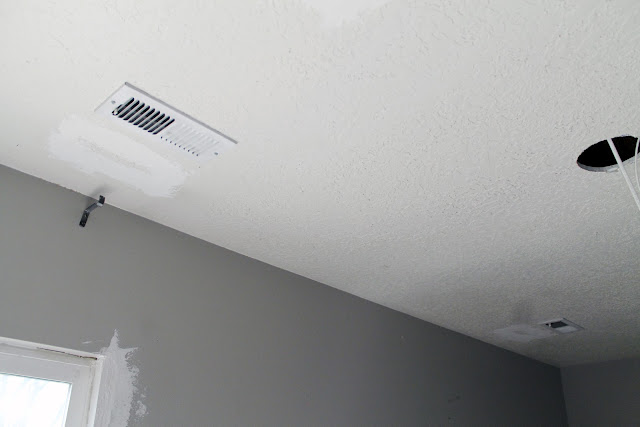 Wiring our own recessed lighting on the other hand…well, that was a slightly different story.  Now the blogosphere knows how to move a vent–or at least that they can move a vent.  It’s kinda liberating, right??

Any other fun things happen this weekend?  Did you see Michelle Williams in that orangey-red number?  I loved it.  It was my favorite. Although, I admittedly only have seen it in pictures–we had to officially take down our television until construction is done. Don’t even get me started on what that means for me and The Bachelor tonight.  That would give the title of this post a whole new meaning. 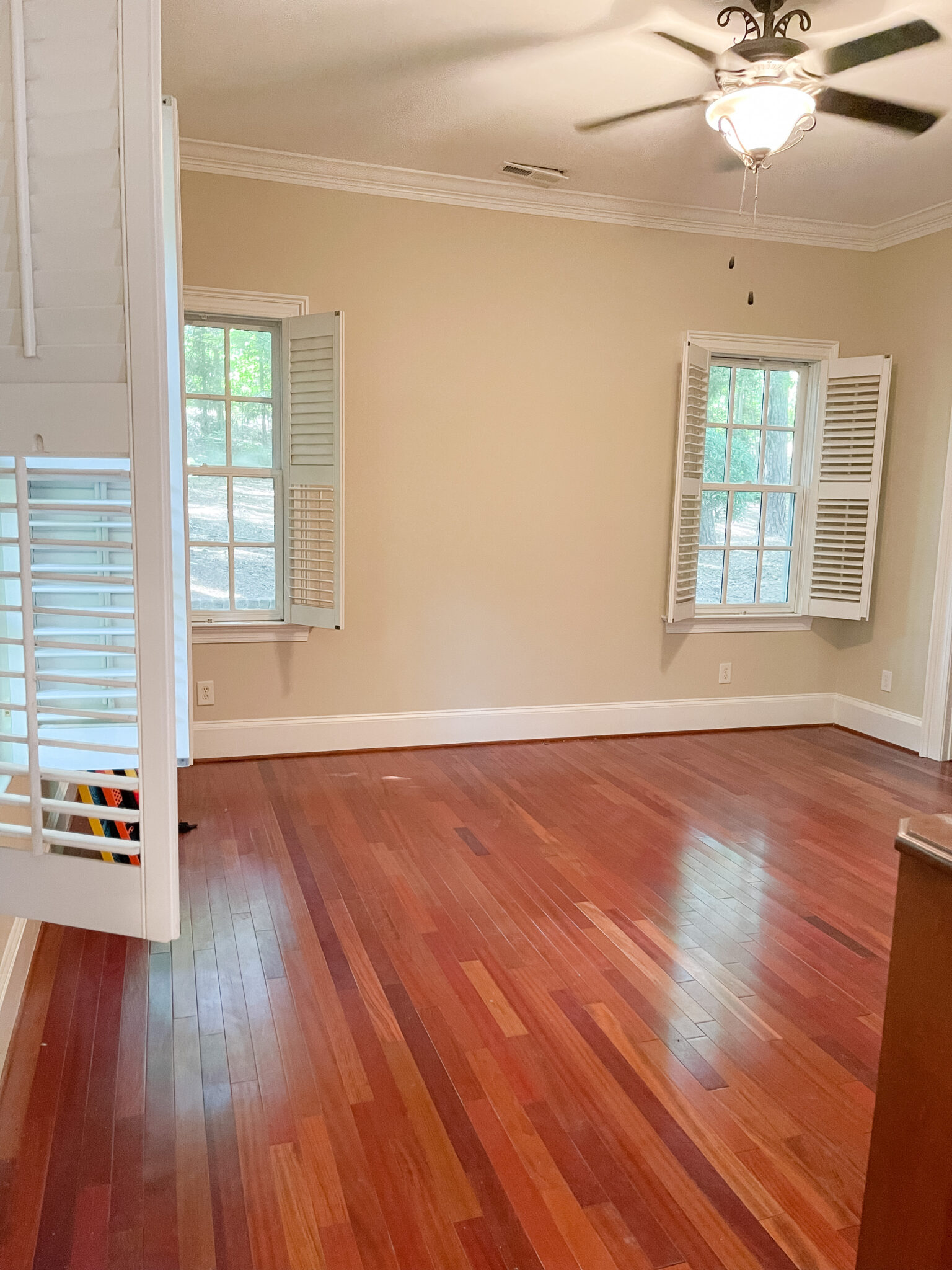