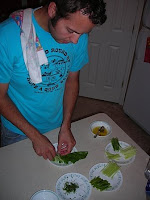 I really scrounge for something to make for dinner nightly so when Thursdays come around, I get excited to eat good food without having to think about it. Thursdays, Chris cooks. He is so creative and the food is always delicious. Sometimes he enlists me as his sous chef and I get to cut things up and watch him in action. Watching him cook is almost as good as eating the finished product. I think I fell in love with him over the years doing just that. 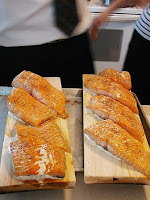 It’s effortless for him. One of our very first dates we went to the grocery store and he bought all the ingredients for a spicy, creamy pasta. I still request that meal. He impressed me with his grilling skills many years ago. From salmon to grilled chicken salad to macaroons–he can do it, and he does it well. This past Thursday, he had another delicous idea; seafood tossed in whole wheat pasta with sauteed vegetables and garlic bread. He had bought this mixed bag of frozen seafood and went to town on creating the meal. I was a little nervous because it had octopus and mussels in it, but he had never made anything that I didn’t like. He started on that and had me help him with the garlic bread. He sliced the baguette for me, all I had to do was spread the garlic and oil over the slices and put in under the broiler for a few minutes. In ten minutes the pasta was ready and Chris started sniffing. Smoke was coming out of the sides of the oven door! He opened the oven and a swarm of smoke filled our apartment. The smoke alarms started blaring. I opened the windows and the front door and eventually the alarms stopped. Chris pulled out the charred squares that were once bread. I felt horrible. I had messed up on such a simple task. He still put the “bread” on the table. We dished up, said a prayer, and took a bite of the pasta. The texture of the seafood was definitely new for me and the taste was very fishy. I didn’t like it at all. Julia: “This texture is kinda weird.” Chris: “This tastes terrible.” We both started chewing on the burnt bread. I think Chris had 3 pieces before he said, “Ya know, I’m only eating this because it tastes better than that pasta.” We laughed. How pathetic. We threw it all away and went to Taco Time.

Moral of the story: Don’t use frozen, bagged seafood and broilers do their job fast. Also, invest in some febreeze to rid your apartment of burnt, garlic, seafood smell.