Weird topic for a post, right? What are we, CNET? Odd it may seem, though, we’ve had dozens of requests for a post on how we chose our TV and why. I feel a bit out of my element talking about this, because I’m definitely not an expert. Heck, we hadn’t bought a TV for 7 years before choosing our 70″ Vizio to fit into our DIY shiplapped entertainment center. 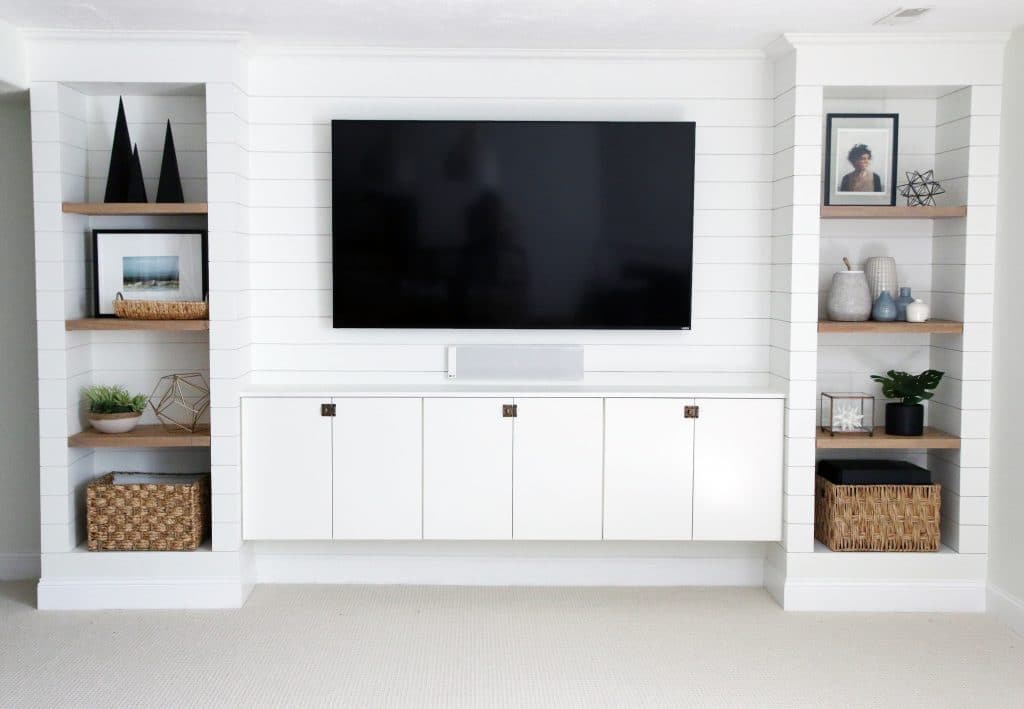 But, I am pretty picky when it comes to electronics and had in mind what I wanted the television side of our downstairs family room to be like. I spent quite a few hours on research, and couldn’t be happier where we landed. And hopefully, for any of you out there also looking to create an in-home theater space, you also find this helpful.

How Will the TV Be Used?
So the first thing, there is no universally “right” TV. There’s no universally “right” brand. It’s all a balance of what you’re looking for and what’s offered, and what your budget is. I think the first step is to determine what you want the ability to do in your space. Do you have cable or satellite? Do you mainly watch movies? And even if all you do is watch movies, is that done through streaming services like Netflix or VidAngel, or with the use of a BluRay player or gaming console? Know how you’re going to use the space, and make a list so you can pick a TV that fits. Right now, we’ve opted out of cable (which is terrible for Jules on Monday nights again) but ran a cable behind the TV in case that changes in the future. We do have Netflix, Hulu, Amazon Prime and use VidAngel a lot, too. And although we have a cabinet full of DVDs, we don’t even have a DVD player anymore–digital all the way! 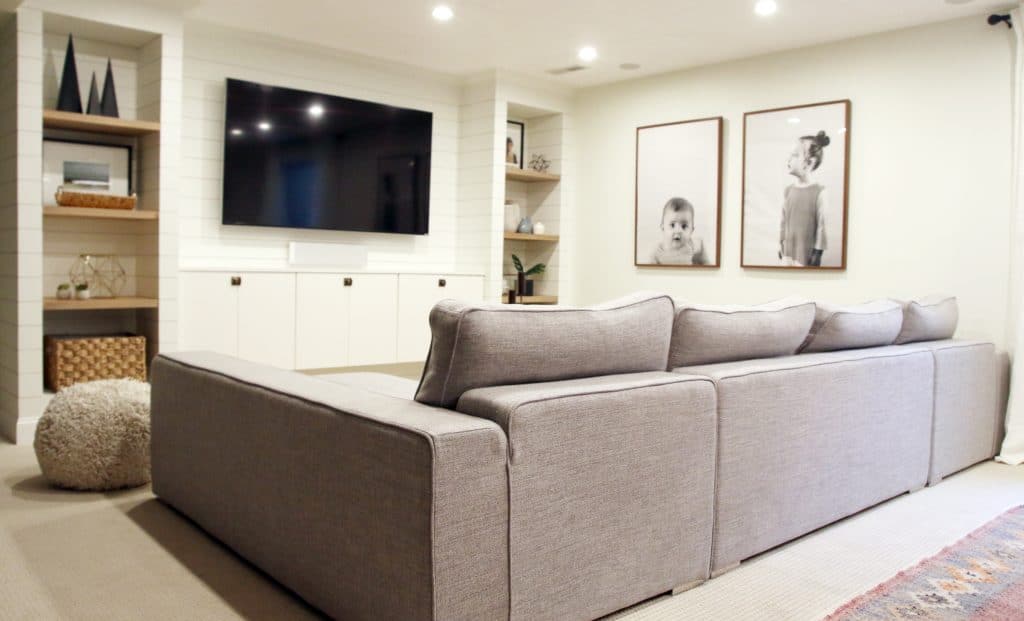 LED/LCD/OLED/PLASMA
Let me push my glasses up real quick. LED and LCD are pretty much the same. They have a great picture and are very bright. Plasma used to be the gold standard it seemed, but it’s a bit less popular now as people opt for thinner TVs and larger screens. Packing performance into the pixels of an LED/LCD screen is easier than it is Plasma. OLED, on the other hand, has some benefits over traditional LED that are worth looking at. The most impressive is the lighting system. On a traditional LED TV, you have all of the pixels being lit by one big light in the back. This means that when the pixels are supposed to be black, they aren’t really because the backlight is always on. with OLED, the individual pixels light themselves, so when a pixel is supposed to be black, it shuts off and is truly black, allowing for great picture contrast.

Refresh Rate
This is a number that people always talk about, and the higher your refresh rate, the better the image, right? Well, not necessarily. It’s a lot easier for companies to improve their marketing language than it is the actual refresh rate, so that’s sometimes what happens. Claims of a 240Hz refresh rate (the number of times an image is refreshed each second – the idea being that your TV reloads the image 240 times every second, leading to a much smoother picture) are often misleading, even among the large manufacturers. In short, yes, a higher refresh rate would be better, but the real test is looking at TVs on a show room floor and seeing which picture you like better. Because they’re all fudging the numbers and are usually half what they actually claim. 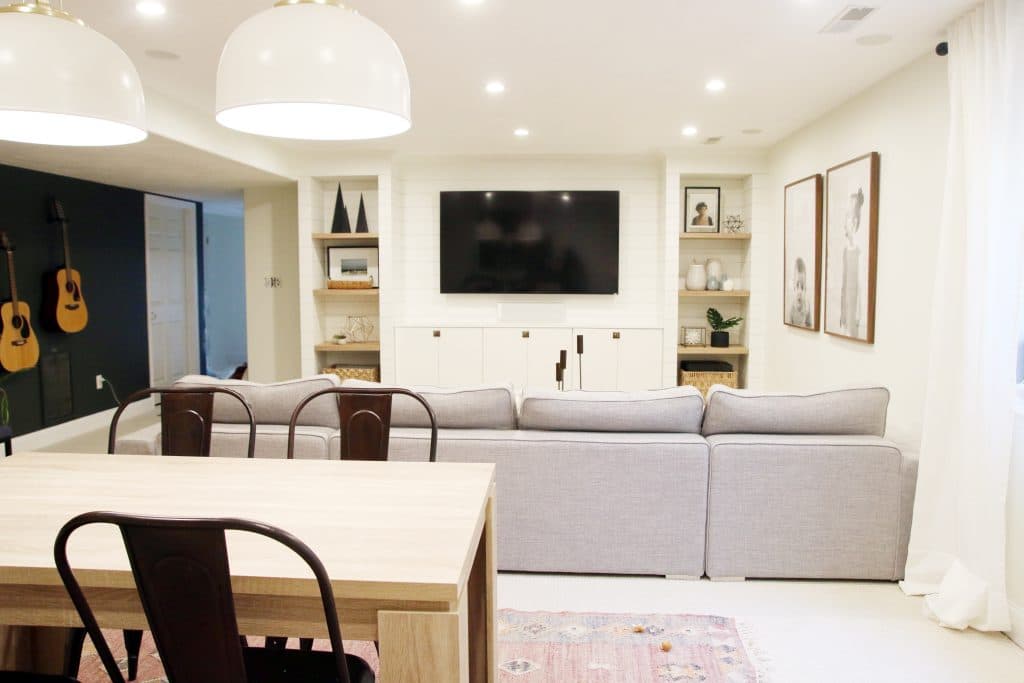 4K vs. 1080p
We’re in a weird transition period right now, where 4K is emerging and people are being encouraged to make the switch (we did because it will probably be another 7-10 years before we buy a TV again). What this means is that a lot of 1080p TVs are dropping in price, and will now be much more affordable than they have been previously. While 4K looks amazing, to really see the difference you need to watch content that has been created for a 4K screen. A lot of content available through streaming services or even BluRays is still 1080p. 4K TVs do what’s called “upscaling” where they take a 1080p image and add pixels to it so it keeps the same quality. It will not, however, improve the quality of a 1080p image. In short, 4K is what’s coming, but if you’re on a budget don’t feel pressured to go above 1080p. Those TV’s still look great.

Size
Choosing a size depends a lot on your personal preference, but also on where you’re going to put it. If you have a dedicated theater room you may want to go as big as your budget will allow. But if it’s a smaller, multi-functional space, personally I’m not a fan of an entire wall being taken up by a TV. In our family room, we went with a 70in TV because we have a large wall, and it’s in a large room. We debated on going a little smaller to save money, but once we took measurements, 70″ fit the size of the room and wall perfectly. You’ll definitely want to mark out the dimensions of the TV you have your eye on, on the wall where the TV will be, before you buy the TV. Straight up, TVs always look smaller in store, then you get them home and it can feel overwhelming. Look up the dimensions online, and use simple painters tape to tape off a block so you can get a better idea of how much space it will take up. Television frames are getting thinner or non-existent these days, too, which means your old 42″ screen might actually take up less room on the wall now. Of course choosing a wall mount that fits your television is equally important. The good news is, most of them fit a wide range. We chose this Omnimount one that can hold TVs from 37″-80″.

Inputs
Before you buy a TV, really think about how you use a TV now, as well as how you’d like to use it. Maybe right now you don’t have any gaming consoles, but you want one (maybe that’s me). Maybe you have an Apple TV, or a Roku, or an old school DVD/VCR combo you use to watch your vintage copy of the original Jurassic Park on VHS. Make sure your TV has the necessary inputs, so you can hook everything up that you want.

Surround Sound
Surround sound setups deserve their own post, but there’s one thing I want to bring up with this, and that is the Arc. This is something not many people are aware of, and it makes a big difference how you set up all your components. With a surround sound system, you have the speakers (including a subwoofer) and a receiver (the actual box that you plug stuff into). Most receivers nowadays have HDMI inputs, so you can plug things directly into it, and have the audio for an Xbox or BluRay player playing through your surround sound speakers. The setup for this is pretty straight forward – you plug everything into your receiver, then run an HDMI cable out of the receiver, into the TV. The tricky part with this is it sometimes leaves you with multiple remotes. One for turning on the TV, one for running the receiver, and any others for extra equipment (Blu-Ray player, for example). Not a big deal, but an inconvenience. A solution for this is to buy a Harmony remote, which you can set up to control everything. Simply click a button on the one remote and it turns on all the necessary components for the activity you’d like to do (watch a movie, play a game, watch TV etc).

So, back to the Arc. If you have a receiver and a TV that are Arc enabled, this means you can run all of the components into the TV, then run one solitary HDMI cable from the TV to the receiver (instead of plugging everything into the receiver and running a cable from the receiver to the TV). Then, once you enable the Arc settings on the receiver and TV, your receiver becomes a slave to the TV and does what the TV does. So, for example, if I have Arc set up and turn my TV on, the TV tells the receiver to turn on. When I change the volume, it changes the volume on the receiver. When I select an input on my TV (to watch a movie or play something), all the audio from that input automatically plays through the surround sound. And it does all this with the remote that came with my TV. This is especially nice for Smart TVs, because you have a lot of streaming apps on the TV already, and if that’s your main source of entertainment (like it is for us) then you have no need for a Harmony remote.

Projectors
We got a lot of questions about why we didn’t get a projector. We did considered getting a projector, but for our space it didn’t make sense. I’d want it mounted to the ceiling, and our ceilings are just too low. We also get a decent amount of light in our basement from the one window there, and some projectors struggle with ambient light in the room – the picture becomes washed out. If your space is pretty dark and you want an extremely large viewing area, a projector may be a great option for you, it just wasn’t the right choice for us and the room which is more multi-purpose.

Brand
Lastly, brand. Televisions are one of those areas where brand really does make a difference, and a lot of times you get what you pay for. We bought a 42in Samsung TV our first year of marriage. We paid like $600 for it back in the winter of 2009. It was the display model, and the $600 was a screamin’ deal. That TV is a complete power house. It’s now hung in our bedroom and works like the day we bought it. I’m a huge fan of Samsung. 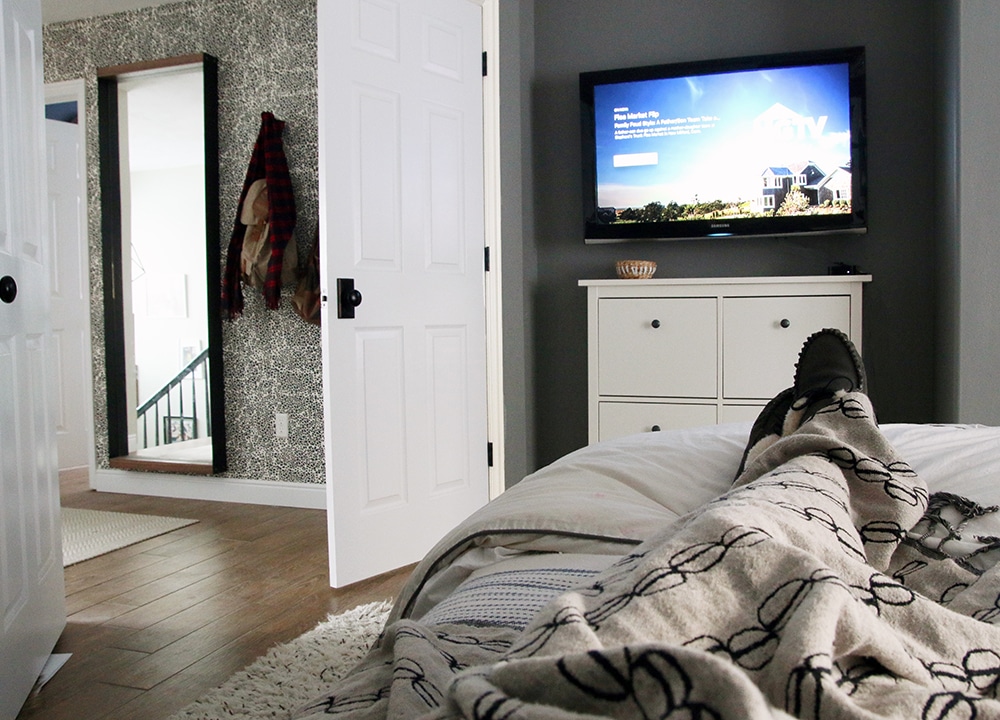 That said, we knew we wanted a 70in/75in TV. Those can be pricey. Even moving from a 65″-70″ showed us a big jump. In comparing and researching brands, we found that VIZIO has really stepped up their game in recent years, and their M-series of 4K TVs receives especially high marks and positive reviews. So that’s what we went with! 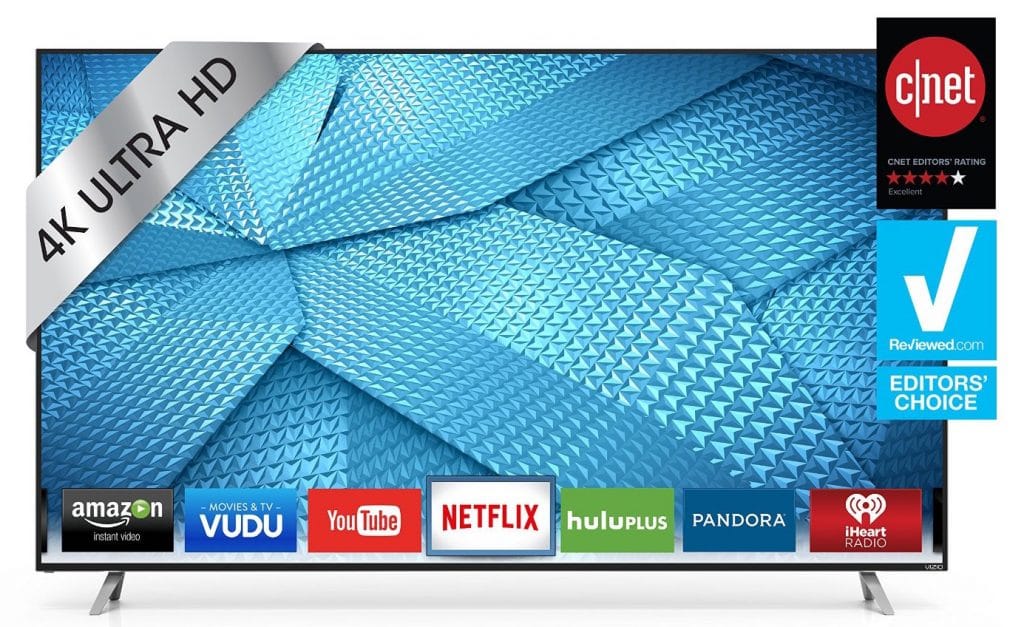 While we trust Samsung and know it would be a great product, we took the leap with VIZIO because it was about $1000 less. And honestly, I can’t imagine being more happy with a TV. We absolutely love it, and they offer a lot of different size options. You can even order them directly on Amazon in sizes ranging from 43 inches to 80.

In the end, that was a lot of words about TVs, but I’ve learned that understanding what your “must-haves” are, vs. the “nice-to-haves” is a great step toward picking “the right” TV for you and your home. Anyone else television shopping lately?? What do you look for?

« 13 Things To Add to Your Outdoor Space this Summer