Back in August 2014, I reviewed some of the items in our home that I get asked about the most and I meant to make it a yearly thing and somehow it is already 2016. However, I do think this is an important series I intend to check back in on from time to time and not just in a passing Instagram comment (which is where I get most of these questions). While we always do a lot of research before bringing something into our home, I want to get in the habit of reviewing these pieces for all of you after the honeymoon phase has worn off. Here’s what we’re asked about the most in the past year:

The Good: We’ve had this glider for 2 years now! Faye is almost 2! How is this possible?! Man, I can’t say enough good things about this glider. The high back and wingback sides make it perfect for resting my head all of those late nights with Faye-Faye. Faye wasn’t much of a spitter like Greta was, so it stayed relatively clean, but for the occasional rogue spit up, it did clean up effortlessly with just warm water and a rag. 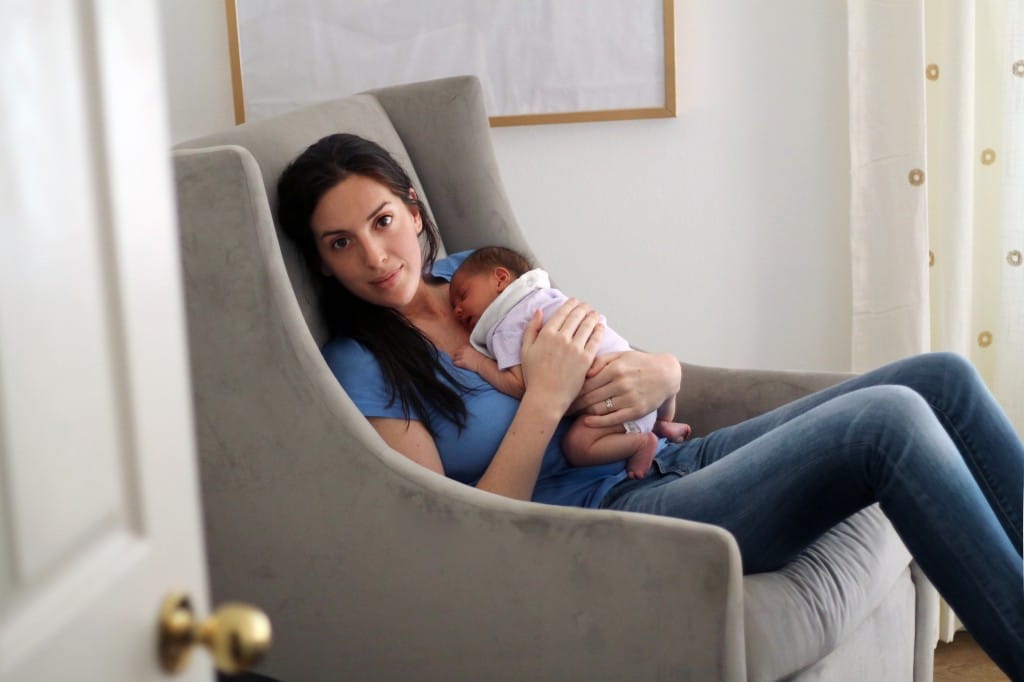 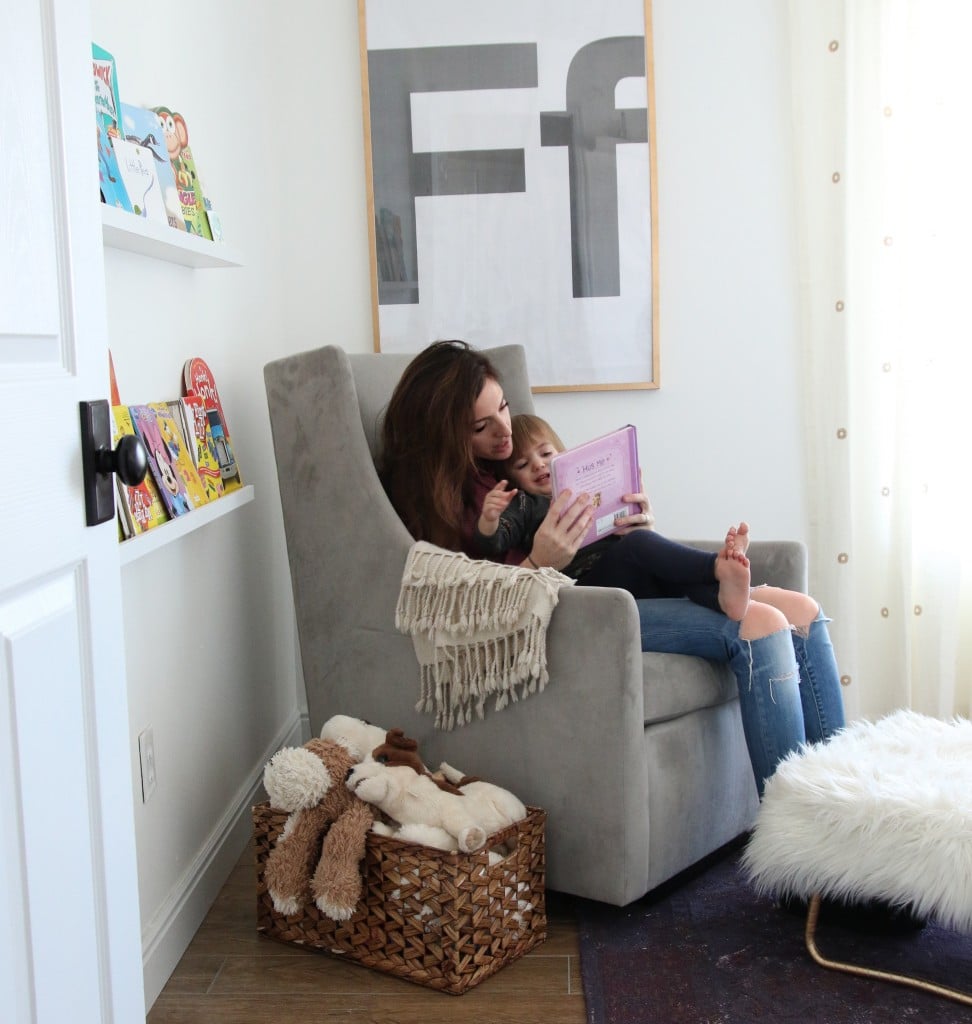 The Bad: There have been a few reports of other people having squeaking issues, but we haven’t experienced that.

Would We Do It Again: Absolutely yes. I can and do confidently recommend this glider to anyone. It’s fantastic and comfortable and stylish. Next time I would probably choose a linen fabric for looks.

The Good: We actually included this one in our last review post from 2014 but we just keep getting questions about it so I thought I’d include it here again. The Lounge Sofa is one of our favorite purchases ever. Of all time! We have now had it for 4 years and recently had it professionally cleaned for the first time and it looks good as new. It’s deep so it’s ideal for tall people (that’s us!) or lounging. I love the straight arms and large, bench cushions which are trending right now.

The Bad: After the professional cleaning, the velvet-y fabric felt kind of stiff. It has since softened, but I probably should have just stuck with my usual warm water and a rag. Looking at photos from when we first got it to now, I can see the cushions aren’t as tight as they once were, but even still I like the relaxed look now. 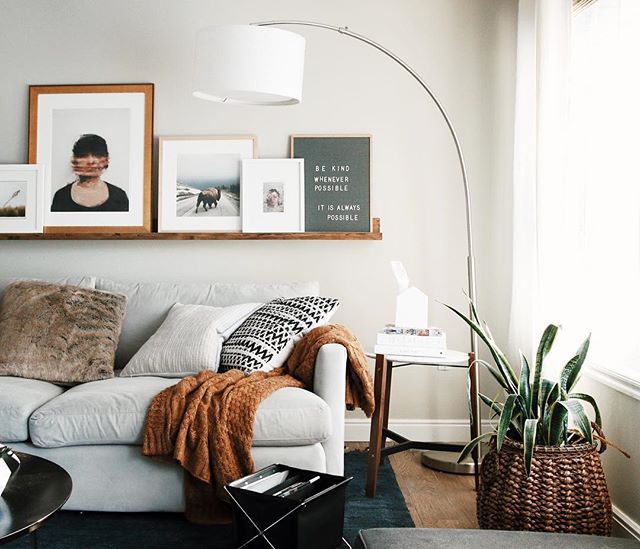 Would We Do It Again: Yes! We considered getting a Lounge Sectional for our downstairs but the dimensions weren’t quite right. Crate & Barrel has now rolled out the new and improved Lounge II (I’m not sure what the difference is) and the Lounge II Petite which is a little less deep. Sounds like a great solution for a lot of people!

The Good: This table is indestructible. The light wood color and groves are great at disguising any would be dents or scratches. It’s solid wood and I mean, SOLID! The girls play on it all day and it has held up perfectly. It’s also narrower, which makes sense in tight spaces, or in our case where we wanted a little more breathing room between the living area and kitchen. 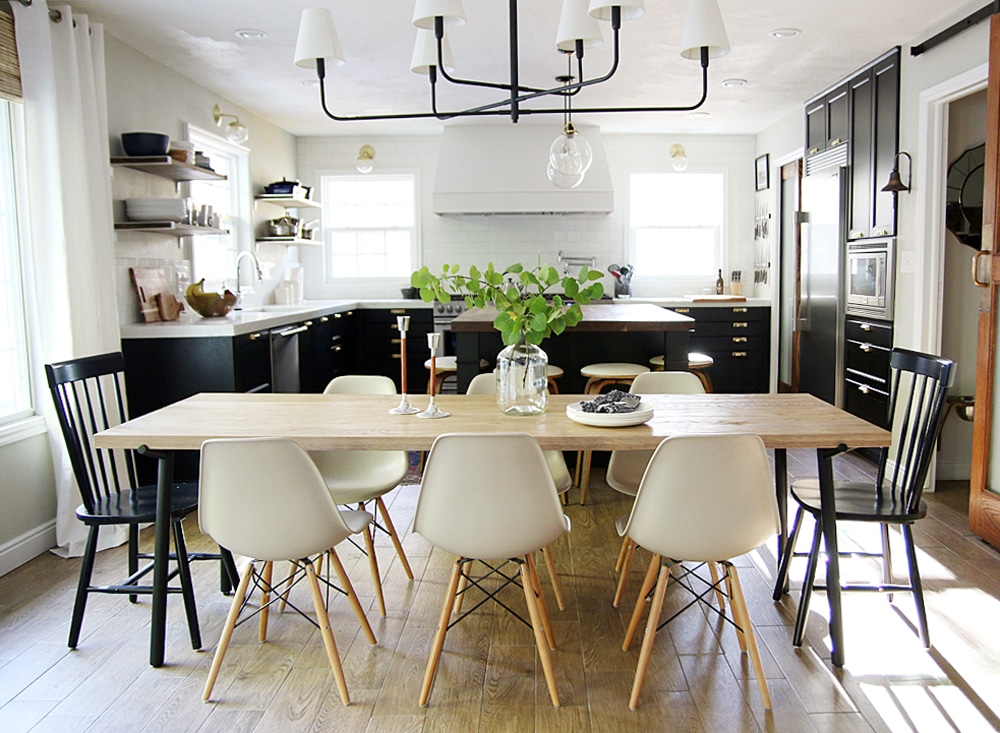 The Bad: The same grooves that are great for not making this table show any scratches have also made this table not really play-doh friendly. Ha! Meaning, things can get stuck in those natural cracks. The girls now do Play-doh on the island where the surface is more smooth. 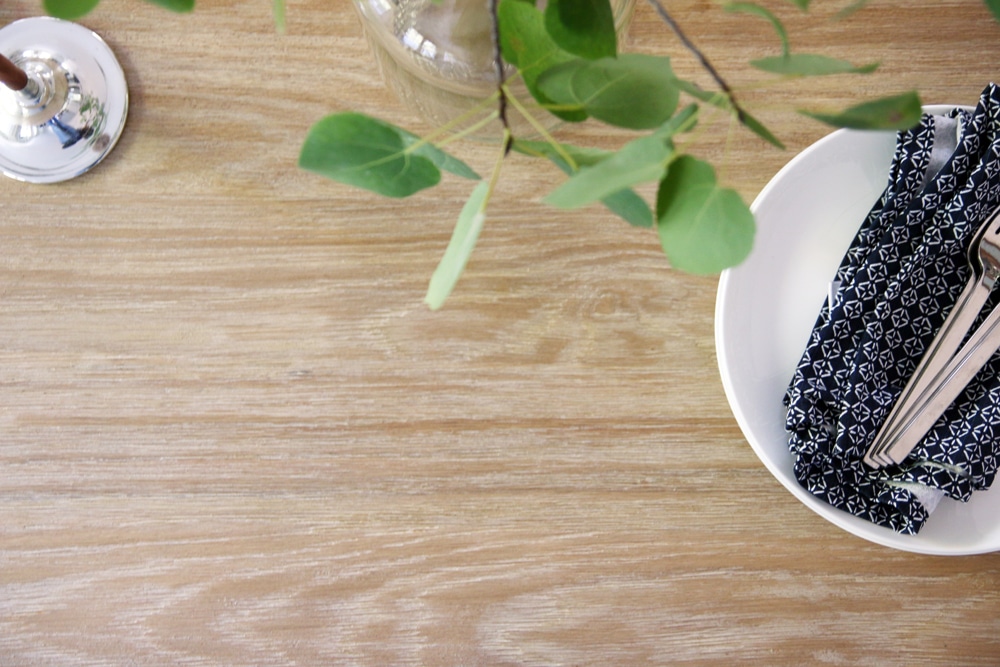 Would We Do It Again: Yes! I think this is a table we will have for many many years because it looks so great and is so family friendly. Seems like other reviewers would agree. We really wanted a table we didn’t have to baby and this is it.

The Good: These chairs are a parent’s dream! They wipe up so easily and there’s no cracks for food to get stuck in or dusting crevices. I’m glad we went with the beige color, too. I think they feel a little more sophisticated. And we were skeptical, but these are extremely comfortable to sit in–even for long periods of time! 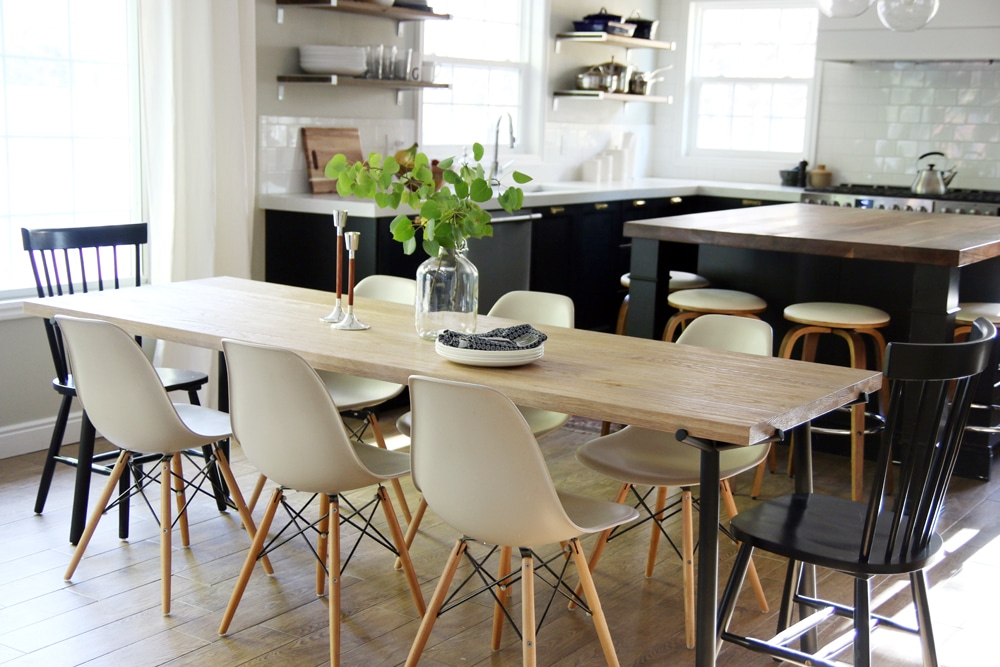 The Bad: They are light weight. Greta loves to sit on the very edge of her chair and rock (we’re working on it) and the chair has tipped several times. Thankfully, no one has gotten hurt! Also, since we attached the legs ourselves, we are constantly tightening bolts which is expected, but could also be considered a “bad”.

Would We Do It Again: Yup! Right now, with little ones, I love the ease of these chairs. The chair is comfortable for adults and makes so much sense for easy clean-up with kids.

The Good: We got these chairs to serve as accent chairs on either end of the dining room table. I love the taller back height and modern lines. 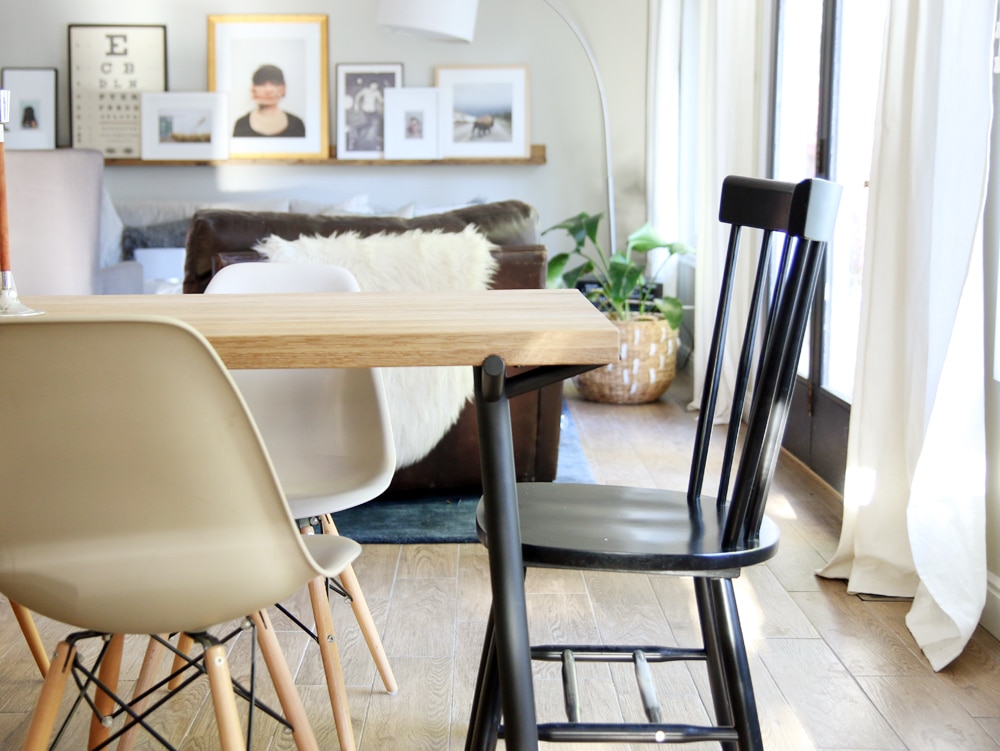 The Bad: The seats have already scratched, I’m guessing from buttons on the seat of pants? I’ve touched it up with paint easily enough but it’s still kind of a bummer. Also, they need regular dusting–all those crevices!

Would We Do It Again: Hmm, not sure. The price was great and the occasional touch up isn’t a huge deal. These definitely aren’t heirloom chairs or anything, but they’re good for the look I wanted right now and the extra seating we needed. I got a plastic molded windsor chair in my office that has held up perfectly and I love! I’m officially on the look out for one with a taller seat back or maybe eventually we’ll just replace all the dining chairs with something like that?

The Good: We’ve had this bed for almost a year now and we’re still all heart eyes over it. The platform style allowed us to ditch our box springs and the fully upholstered frame feels safer for little ones that are always running around. We are also surprised with how handy it is to have that sort-of “step” around the whole bed. Faye uses it to climb up herself, I store my phone on it at night, it’s a convenient place to tie shoes. It’s a beautiful, practical bed, reasonably priced bed. 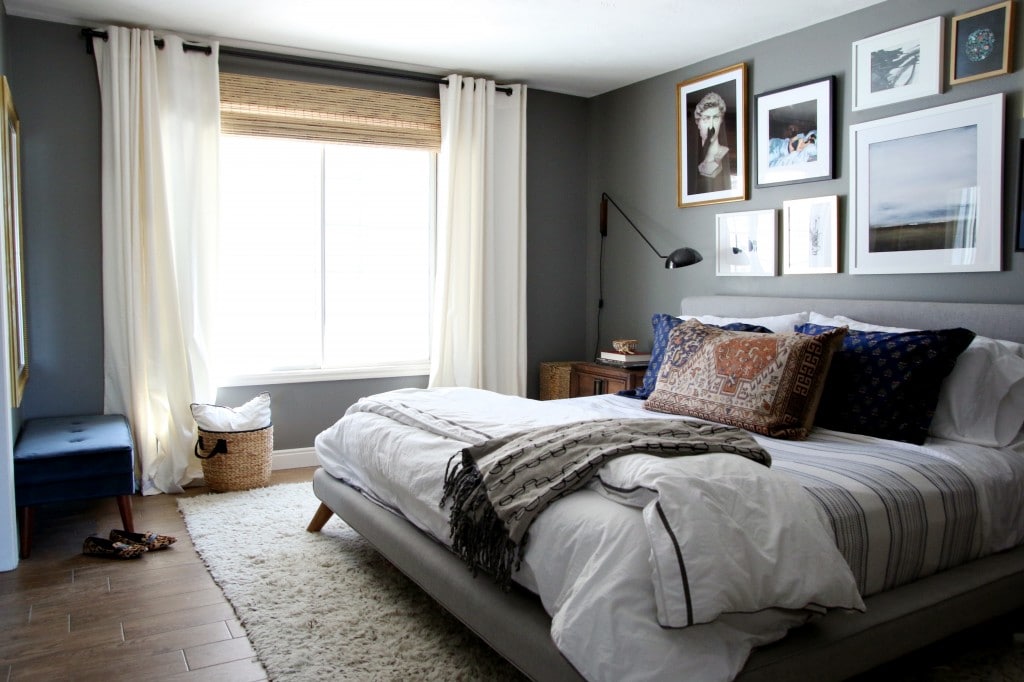 The Bad: It does require vacuuming. Haha. Maybe it’s just that we have a big, hairy dog, but it attracts dust and hair. Nothing a quick vacuum doesn’t fix. We have had a couple spills on the “step” around it that have wiped up with no issue. Another negative is the delivery person (a third party individual) didn’t do a very good job putting the bed together. Shipping included assembly and the legs were on backward and very loose. Chris was able to fix it without issue but it was an unexpected job. 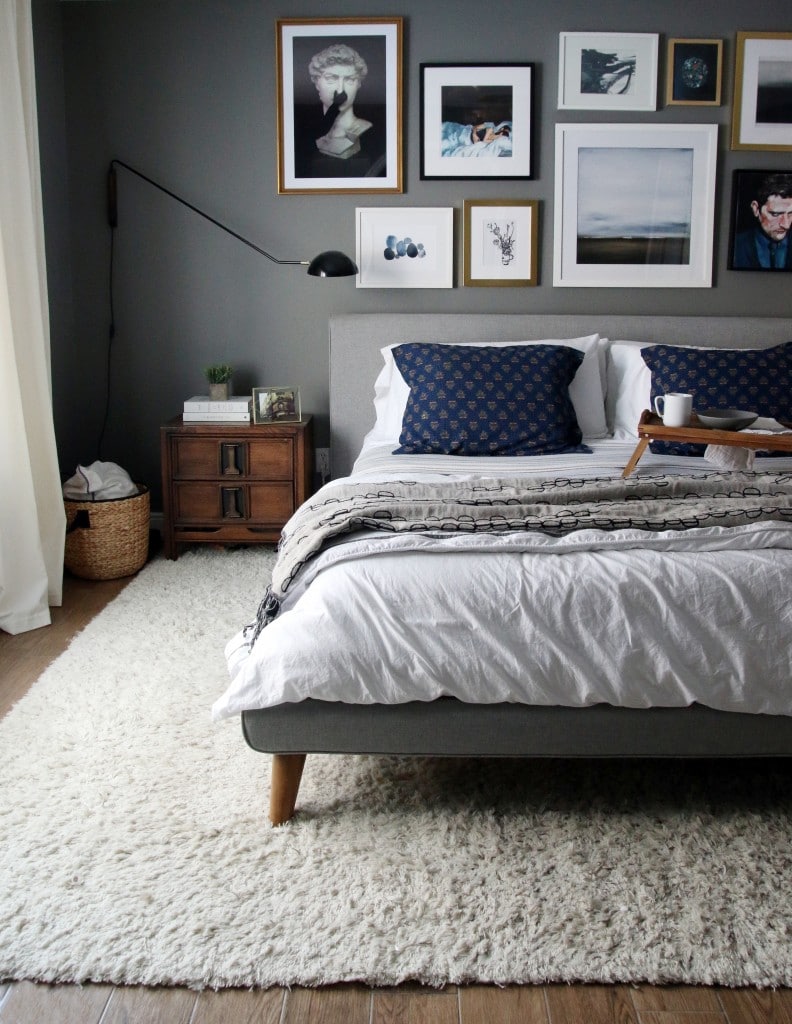 Would We Do It Again: Yes! This bed is dreamy and has been a completely pleasant addition to our room.

The Good: This light first caught our eye because it felt like an art exhibit doubling as a light. It’s really beautiful and the length is customizable making it easily adaptable for a lot of different ceiling heights and spaces. Here’s a post about it in our stairwell. 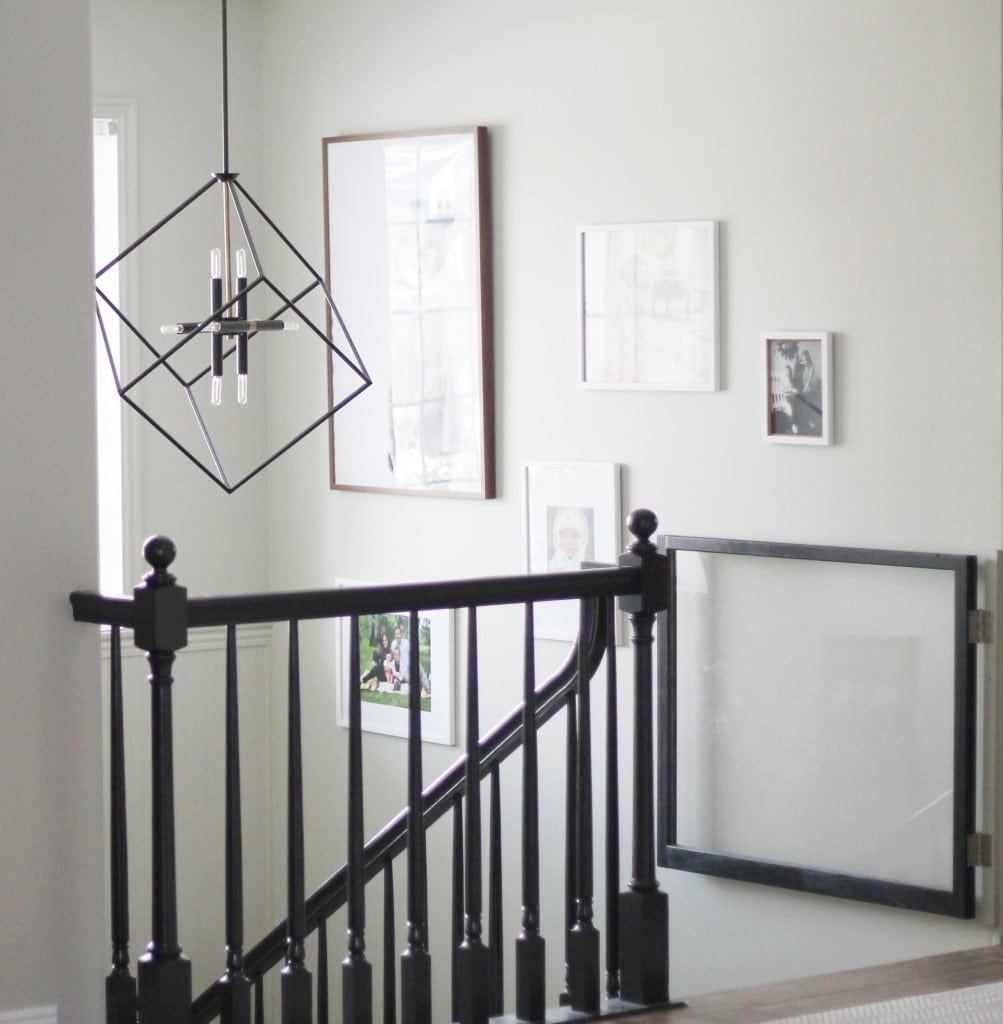 The Bad: There have been a couple things we didn’t anticipate, namely, although there are eight bulbs they are pretty small, dim, expensive and we’ve already had to replace a couple. Also, the wide open design has attracted webs (I can’t even think about it!).

Would We Do It Again: It’s such a unique, beautiful light, but I don’t think we’d use it in our stairwell again. Especially since it’s the main light for the entryway making it a pretty dark walkway at night. We’re currently on the hunt for something that gives off a little more light.

The Good: This is one durable rug! We were really worried such a light color (we went with the Linen) would show dirt right away, but almost a year and a half in and it has exceeded our expectations. We love that we were able to fill up our entry hallway and the pattern and texture is really quietly beautiful. 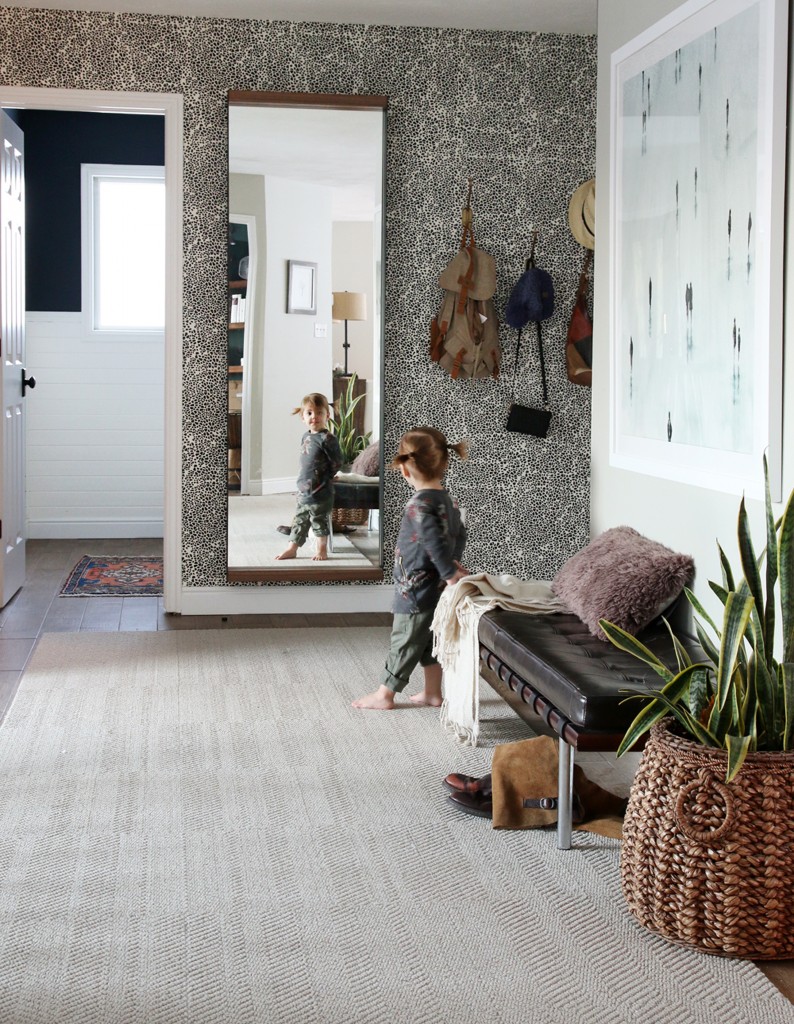 The Bad: Obviously the part by the door has experienced more wear than the other parts, but it’s not even that bad. I expect we’ll give them a good cleaning (Yellow Brick Home did a great tutorial on cleaning theirs!) sometime this year. 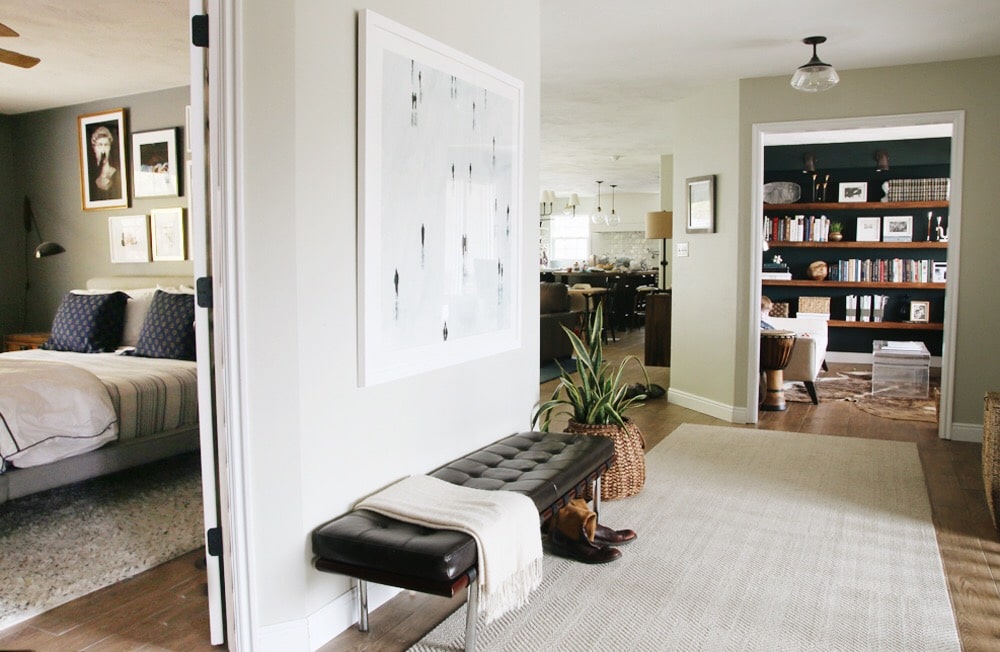 Would We Do It Again: Yes! This is our second go with Flor Squares and they continue to impress. They make so much sense for our family and home.

The Good: I saved the most asked about thing in our house for last–the white concrete countertops we poured in our kitchen last fall. I planned to write a whole kitchen review a year after the reno was completed, but I’m happy to talk about these counters as much as possible. We love them. Really love them. They add such a cool element to the whole kitchen. The peppering adds a great dimension, they are cool to the touch (like stone), they are thick and hard, we can set hot pans on it with no worry and for the most part we haven’t had any issues. 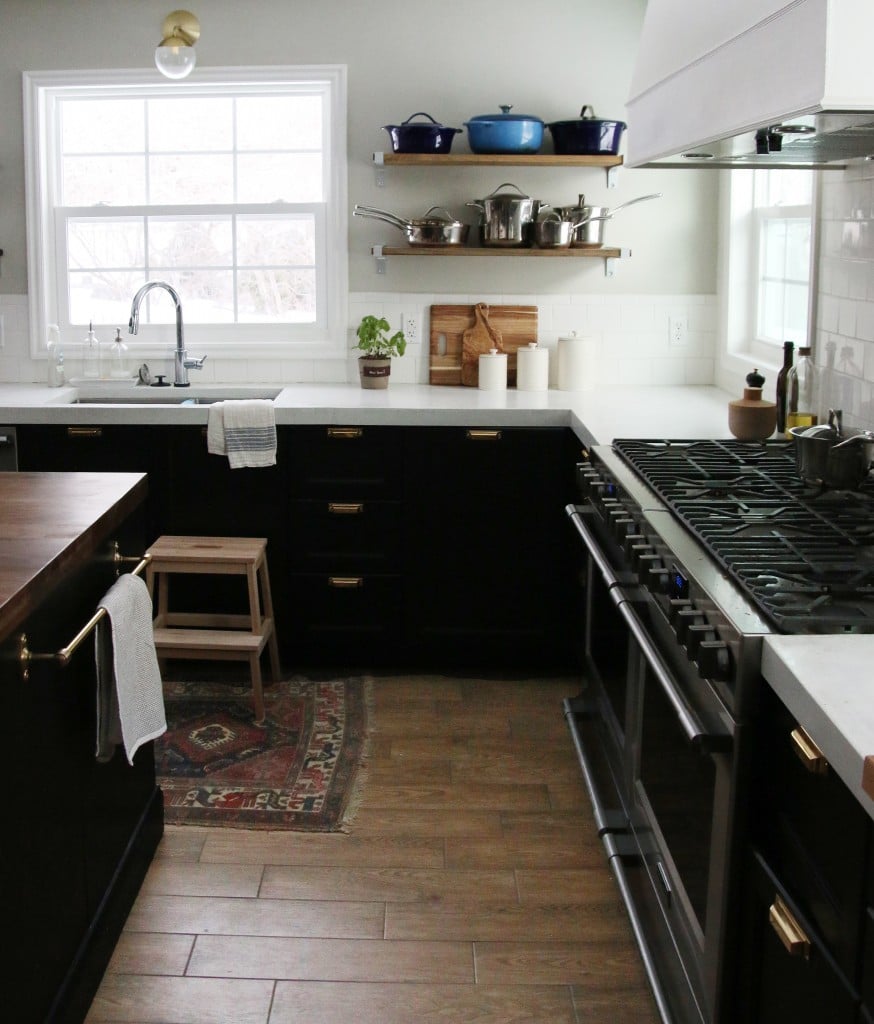 The Bad: …For the most part. We invested in a really high-quality sealer that was a process to apply and we attribute most of the ease of the countertops to that sealer. There is one rice-sized slit in the sealer by the sink. I don’t know how it happened or we missed it? But it’s there. And every time it gets wet, it gets dark right there. And when it dries, it’s back to normal. There was one scary moment where food from a dirty pan that was set on that spot got in the slit and therefore on the concrete. I was worried it was stained forever. But I poured some bleach on it and it is back to the original color. There was another time where curry got on the countertops (the regular sealed section) and I was sure it was going to be stained. But it wiped off. So besides that little crack in the sealer–it’s all been good. 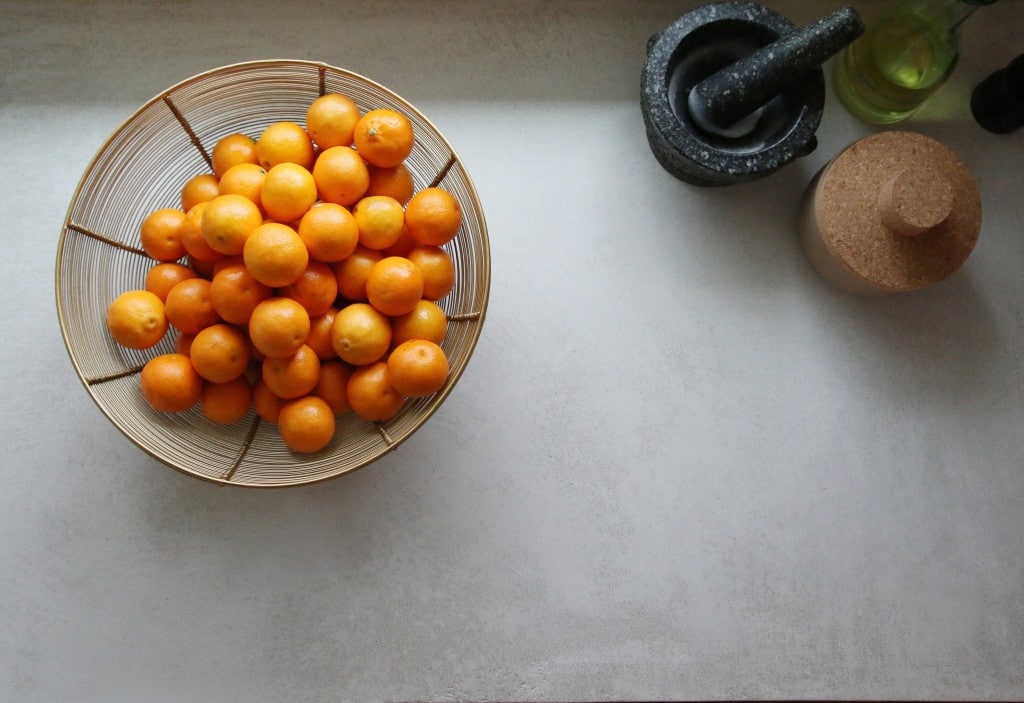 Would We Do It Again: Actually, yes! Admittedly, we had no idea what to expect when we first decided to include white concrete countertops in our kitchen renovation. It was a cool project that we wanted to try. And to our surprise, we’re in love with them and all of our friends love them, too. Many of which, have since added them in their homes. We are still testing their limits though, so look for another review later this year.

I hope that helps answer a lot of your questions. Did I miss anything!? Feel free to ask additional questions in the comments. Happy Leap Day!

« A Source for Entry Door Shopping + Choosing Ours

Tearing Up The Stairs » 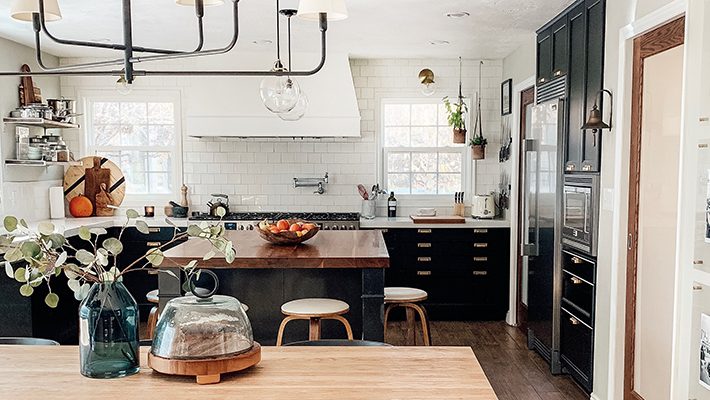 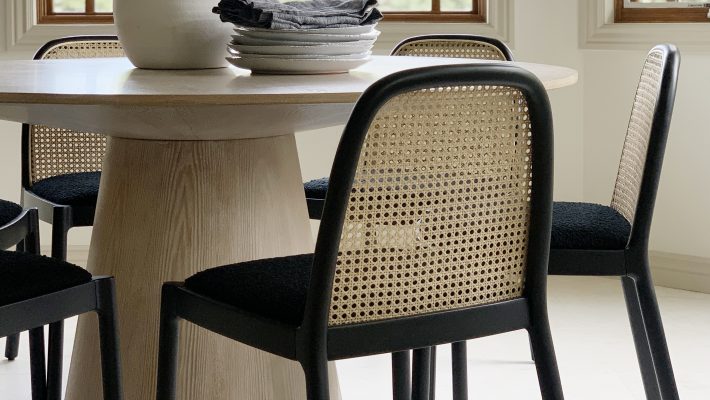 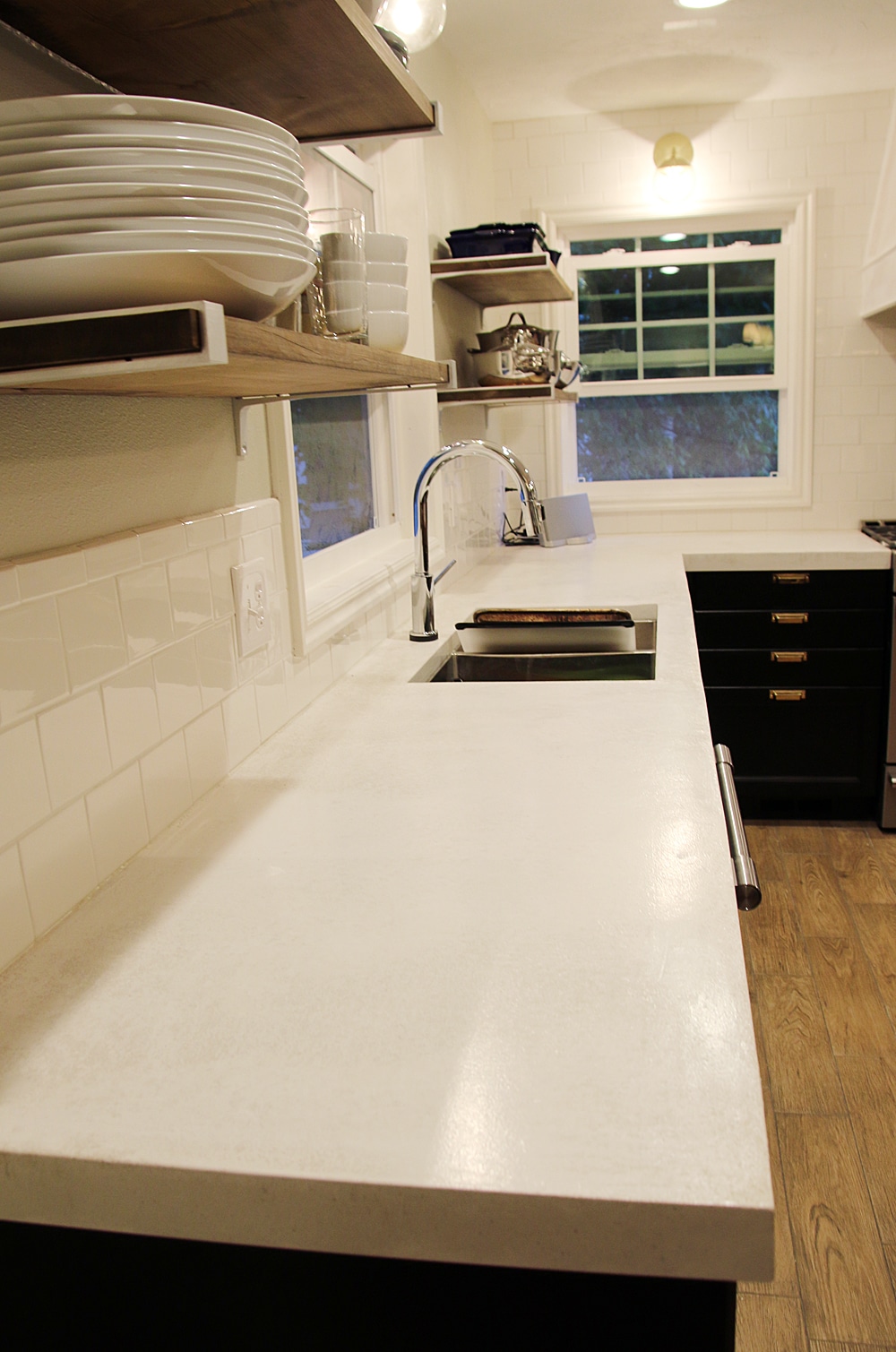