If you’ve known me longer than 15 minutes, you know I think grilling is the most bombay way to cook. Grilling is, hands down, the best way I’ve found to create crazy amounts of flavor while simultaneously cutting out calories (and reducing dirty dishes – which I’m all for). Being a frequent griller, I’ve sort of hit a brick wall: My grill.

A Member’s Mark 2-burner Gas Grill that I bought at Sam’s Club a couple years ago ($200 range). Don’t get me wrong, this grill has served me well in its time, but it took some figgerin’ out. Here’s the deal. Two burners is great if the grill is pretty small. This grill actually has a fair amount of real-estate inside. When I bought it (before I knew what I was doing) I thought that was a good thing. “Holy cow, look at all this space, and only two burners to boot!” Basically, I was saying, “Wow, they found a way to defy the laws of nature!” Because that’s what it would take for two burners to evenly heat a space that big. I can literally place my hand over some parts of the grill without feeling any heat, while other spots produce food that looks like it was in the pocket of some poor Pompeian man who decided to hike Mt. Vesuvius one fateful morning.

Long story short, I started grill shopping. Because I spend so much time on the grill, I wanted a unit that had more to offer. In my quest, I stumbled upon this beauty:

The Stok Quattro (surprisingly still under $300). As if the jump from 2 burners to 4 wasn’t enough to get me excited, this grill also has a few surprises up its sleeves, which I’ll get to shortly. This picture was taken about 30 seconds after I finished putting it together, and about 45 seconds before I lit it up and got cookin’. Let’s take a tour. 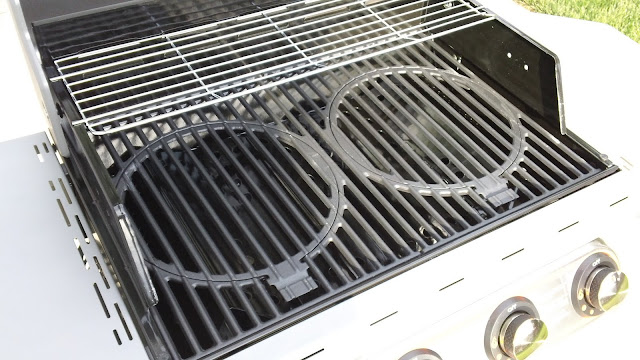 Now obviously the first thing you notice is the two big circles on the grate. What’s that all about, you say? Inserts. This is the man’s way of accessorizing. Use the grate for straight-up grillin’ or replace it with whatever tickles your fancy that day, whether you want a skillet, vegetable tray, or pizza stone (all included). I’m literally gitty with the possibilities. What did I choose last night? 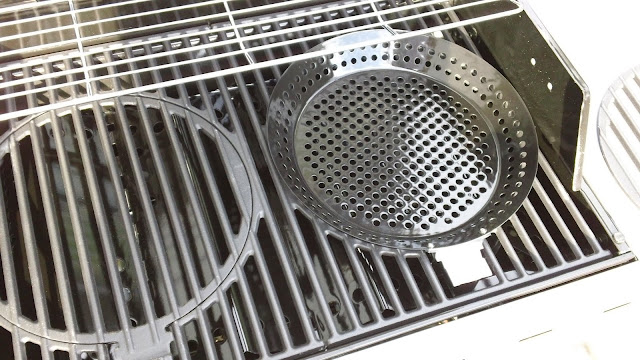 The vegetable tray. What a genius idea this is, right? My body is in a constant state of craving for grilled veggies, so owning a grill that has an app for that (er…insert) is perfect for me. Let me show you what you can do with this.
Now I don’t want anyone to say, “Well I can’t make that because I don’t have a veggie tray.” Oh please. Stop creating barriers for yourself. Cut your vegetables into big pieces and then cut them smaller after you’ve cooked them. Sure, it’s an extra step, but it’s still a way to hold you over until you’re able to buy this awesome grill. ;)
Cut your veggies and put them in a bowl. Coat them with a fair amount of cooking oil (not extra virgin olive oil- it’ll burn on the grill and taste horrible), kosher salt, black pepper, garlic powder, ancho chili powder (which everyone should have in their kitchen as far as I’m concerned. it’s not spicy, it’s actually kinda sweet and tastes awesome), chipotle chili powder (this is also something everyone should have in my opinion. although be light with it because it really is pretty spicy), and a little of your favorite barbecue sauce. I used Sweet Baby Rays, which I think is the best store-bought sauce available. Mix it all up and set it aside.

Put some cooking oil on a plate and coat your pork chops with it. You’ll notice that I always talk about grilling being so healthy, yet every time I grill, I completely coat my food with oil. “What is this nonsense?!” You might ask. Well, it’s not nonsense. The unhealthy part of cooking with oil is when your food sits in the oil and sizzles away. The food actually takes in the oil, which you later take in when you eat it. As with all cooking techniques, adding cold oil to a hot surface before adding your food will prevent it from sticking and any extra will run right off (don’t use too much though, because oil will catch fire pretty easy with a grill). Sometimes you’ll see people brush oil onto the grate. Yeah, then take a look at their brush. Completely melted/singed/burned. There’s no reason for that. Just put it on the food.

Season your chops with similar seasonings used for the veggies, just no bbq sauce. 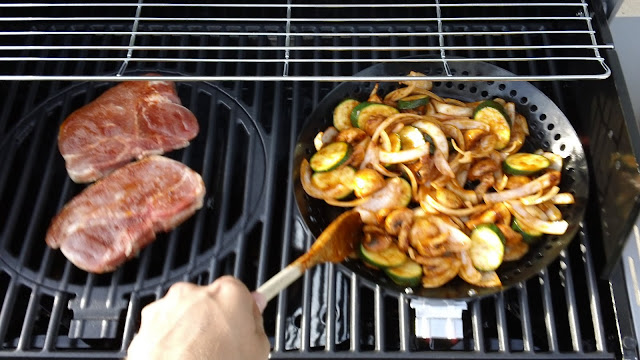 Turn your grill on and let it heat for about 10 minutes while your food marinates. Then, start cooking. It seriously does not get easier than this. Cook your pork chops to an internal 145 and you’ll have the juiciest chop you’ve ever tasted. Lots of people treat pork like chicken and cook it to 165 and beyond. There’s no need. SafeServ guidelines (those are the folks who regulate restaurants and such) say 165 for GROUND pork, 145 for the rest. Any higher and you’ll end up with the type of meal that gives pork chops a bad name. 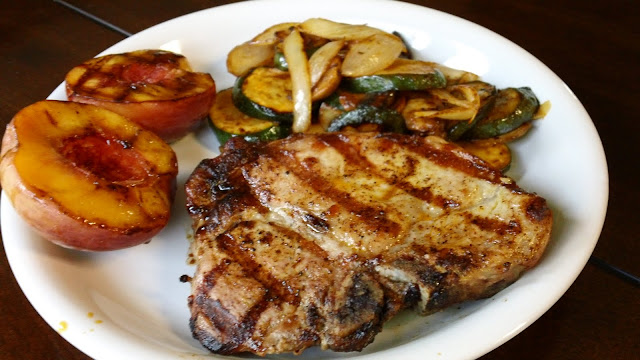 That’s all there is to it. Add some grilled peaches and you’re in business. The vegetables caramelize perfectly on the grill and taste amazing; the pork chop, well, does that look dry to you? ’nuff said; and the grilled peach (glazed with equal parts water and brown sugar, with a small dash of cinnamon) brings everything to another level. For any of you with a grill, I encourage you to try a meal cooking every single thing right on the grill. And I’m not talkin’ about hamburgers and hot dogs. I mean a REAL meal. You’d be hard pressed to find a food that isn’t made better by the grill, the only exception being ice cream (and that’s only because I haven’t figured out how to keep it from falling through the grate… yet).
Of course, this whole insert thing does bring up ONE issue…
…dishes…ugh…