Last week, when I finished the hallway with Mr. Poppin, an Ikea canvas, and an original piece, my mom called me up and said, “It’s just so easy for you, isn’t it?”  I had to laugh, because although the hallway wasn’t difficult to put together–other things are.  It definitely isn’t always easy for me.  The last 48 hours I have been working on a project that I would put in the “challenging” category.  I just could NOT figure out how to execute the oversized letters I fell in love with at Anthropologie.  Good news, it won’t take you 48 hours, a case of carpal tunnel, burned fingertips or even the $98/letter Anthropologie is asking.  I have to thank my sweet hubby, Chris, for being such a mastermind.  He thought of the final solution and we now have our own 25″ tall, 2″ thick HUUUGGGEEE letters to prop above our bed:

But let’s back track (just for fun) so you can see the mess I went through before getting to this point.  First, I thought of cardboard.  I had a bunch of boxes in our storage closet, but only two were large enough to fit a 25″ letter.  Welp,  I only needed two.  Victory.  I thought, “Wow, this is going to look awesome.  So easy.”  I was taking pictures a long the way to show you how I was doing everything.  I burned my fingers a hojillion times trying to hold the pieces together while hot-glueing (not recommended).  I got this awesome spray paint that Rustoleum makes that is a “hammered metal” effect–perfection!…. …. ….until it seeped THROUGH the cardboard leaving it just solid silver and looking very cardboard-y.  Blah!

So, day two rolls around (yesterday) and I went out and got foam core.  I figured if I made the front and backs of the letters out of something smoother, then I wouldn’t get the texture showing through the spraypaint.  I was also crossing my fingers that the sweet spray paint I found would actually stay on top of the surface–I didn’t get that far.  Once I cut out the “J” using a box cutter (I don’t know if that’s what it is technically called, but it has a different name in my book now.   I blame my carpal tunnel on gripping that sucker for too long.)  and glued the sides to the bottom (more burns) I realized, the top wasn’t going to fit exactly.  Arrrgggghhhhhhh!! AAAAAHHHHH!!  I was so close to giving up.

And then I called Chris and told him my sob story and he suggested using something that was already 2″ thick, like wood, and a jig saw (which we didn’t have…yet :) ).  Brilliant!  He stopped at Lowe’s on his way home and called me while he was there so that he could talk me through everything he was seeing and I could choose (so sweet, huh?).  He found a jig-saw for $40 and it is something that we will use often, so he got that.  Then he went over to the wood.  They don’t make 2″ wood that is atleast 25″ long and 20″ wide.  They just don’t.  We started talking about perhaps glueing two pieces together for thickness, yada yada.  Then he spotted insulation styrofoam.  A BIG sheet for $15!!  It was 2″ thick and smooth.  My voice was getting higher and higher with excitement.  He brought it home. 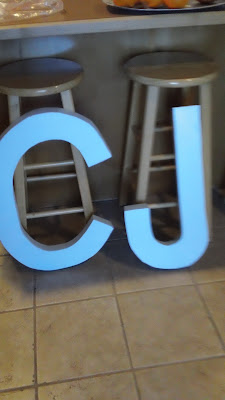 He cut the letters out with the jig-saw and I sanded the edges a little.   You can’t spray paint styrofoam, so I put a coat of black acrylic paint on this morning:
followed by drybrushing Plaid’s Acrylic Craft paint in “Metallic Silver Sterling”: 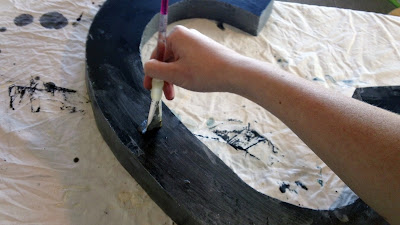 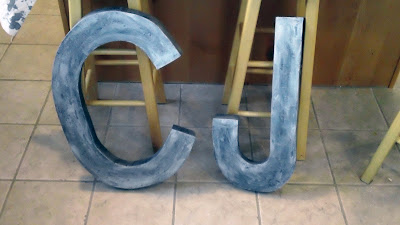 And now we have zinc-looking oversized letters of our very own!  Once the styrofoam was in the house, it was easy-peasy.  I would totally do it again, in fact, I might.  Maybe a future giveaway or something.  We still have half of the insulation board left and I know at least one person that would love a big ol’ letter: 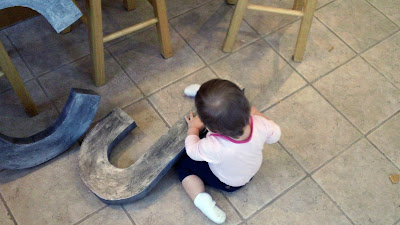 Hot Pockets. Not Special, Home-Made Ones Either. »