I’m slowly getting back into work after having Polly and we have so many exciting things and projects to share with you! Shortly before she was born, we started our side yard project, which feels more like a traditional backyard really.  Our property is an interesting shape consisting of our front yard and then three triangular yards behind the fence. 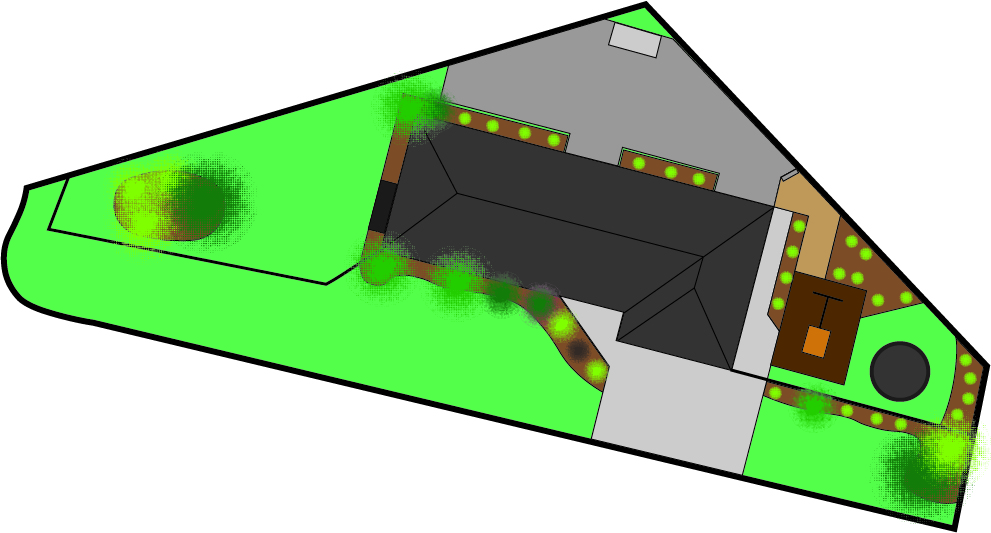 The smallest triangle is in back of our house, our deck, and then we have two large side yards on either side of the house behind the fence. The side yard on the south side of our home we decided to make a special play area just for our girls and we couldn’t be more thrilled with the way it turned out. We saved up a good chunk of change to be able to do this for them, and although it’s only been done for a little over a month, it’s already been worth every penny.

This is the first project we hired out completely. Ever. We’ve hired out parts of projects before, but this one, from design (with our input) to execution was done by a local landscaping company, Spruce It Up–who we couldn’t recommend enough! We made a lot of changes throughout the project and added on a lot of things as it progressed (“Can we add some paver stairs?” “Can we add some sod here?” “Can you landscape in front of the fence, too?”) and every time we mentioned something, they said, “absolutely!” Of course this all reflected in our final invoice (ha!), which we’re happy to share with you in the reveal if you’re interested, but it was still nice that they were so willing to accommodate every item on our checklist with this project. Here’s where we started: 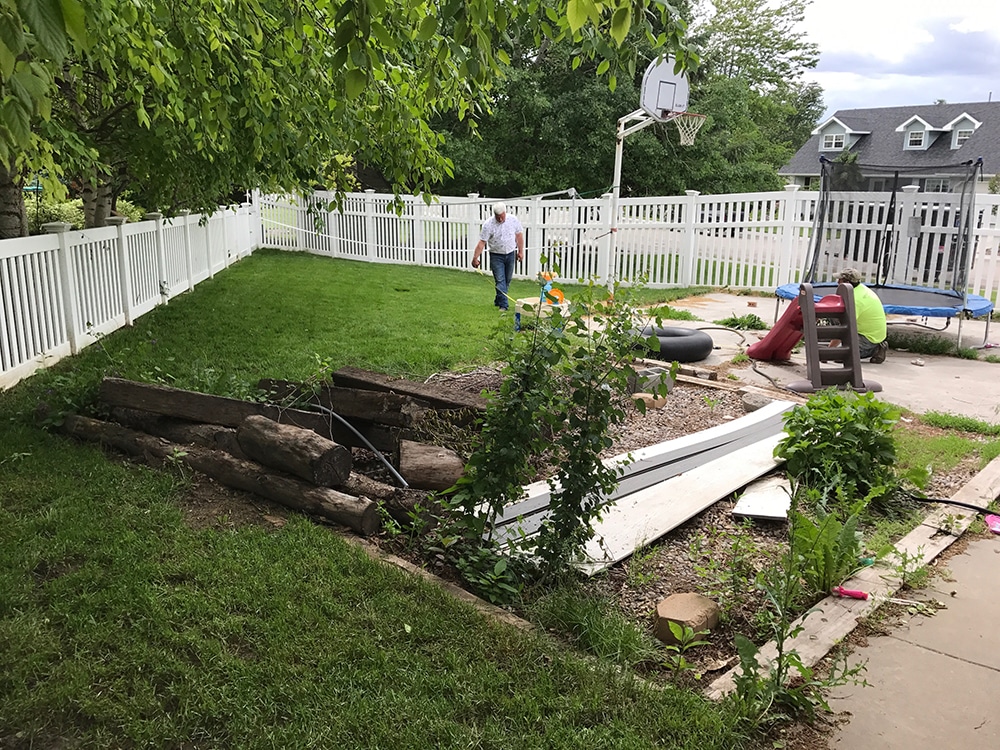 There was a large gravel pit where a shed used to sit when we first moved in. An unused basketball hoop on a large concrete slab and no general direction. They presented us with this initial plan: 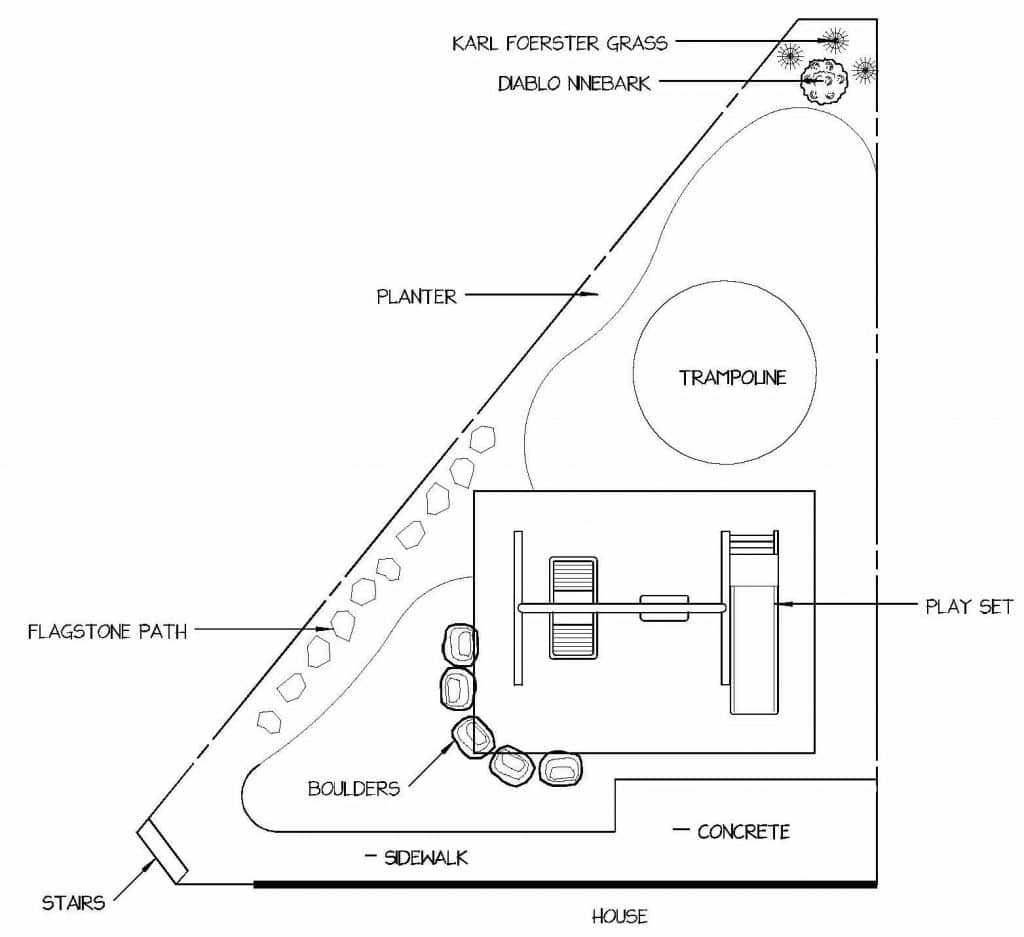 And a few weeks later, the project started on the exact day that we were doing this master bedroom makeover outside of our home. So Chris was running back and forth answering questions and snapping pictures. 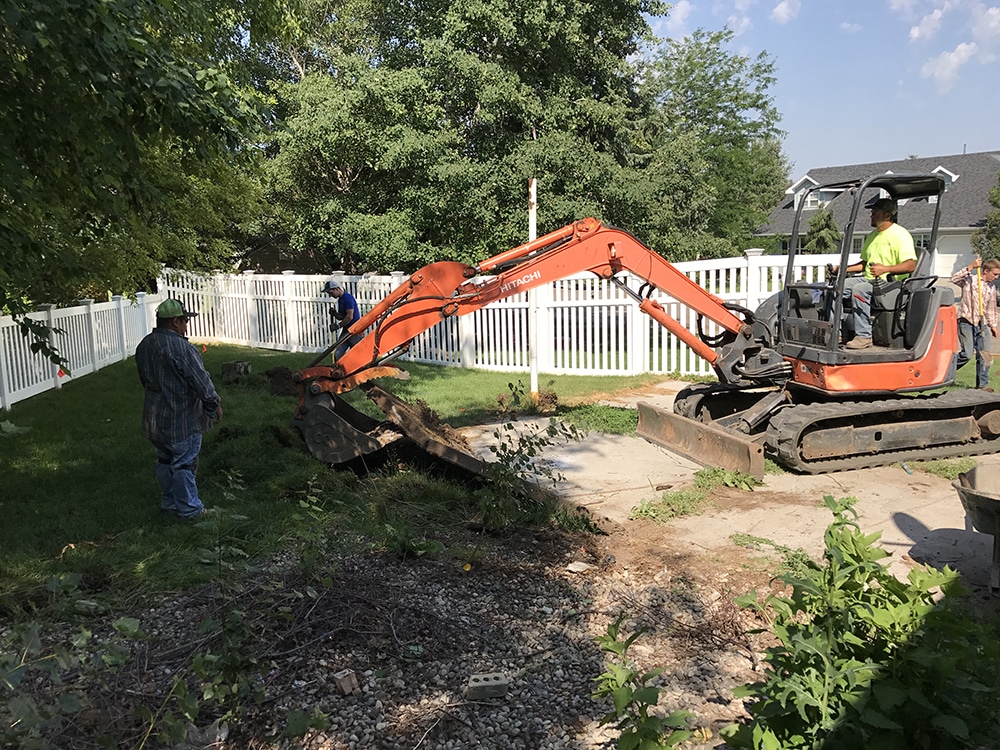 Initially, there was a lot of demolition and digging that almost makes you worried it will ever come back together. 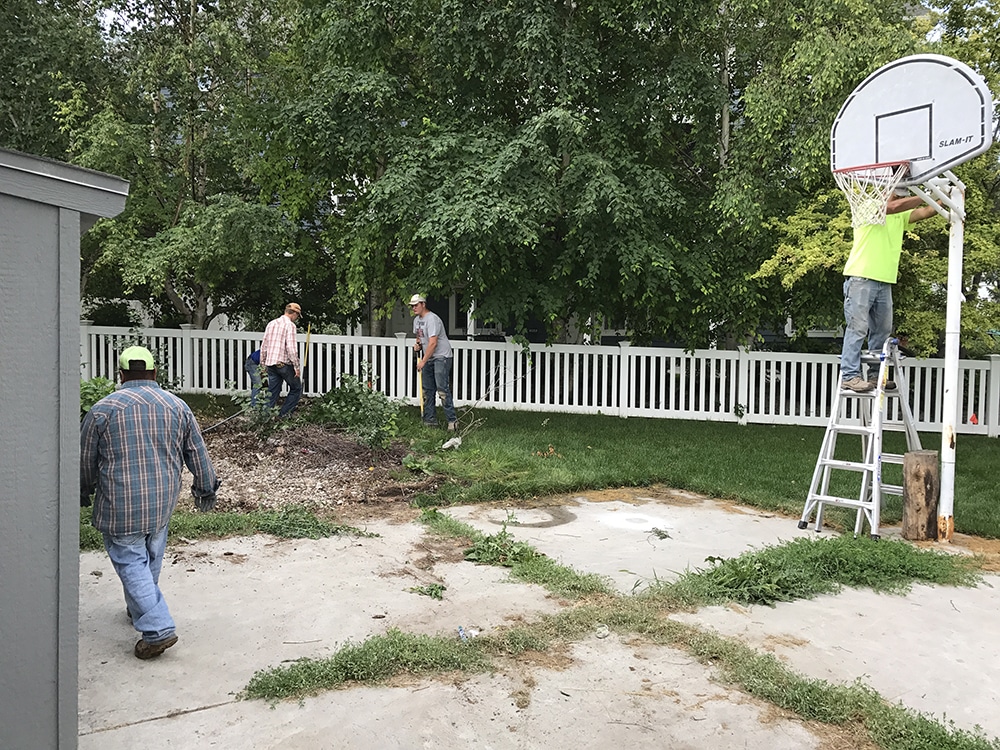 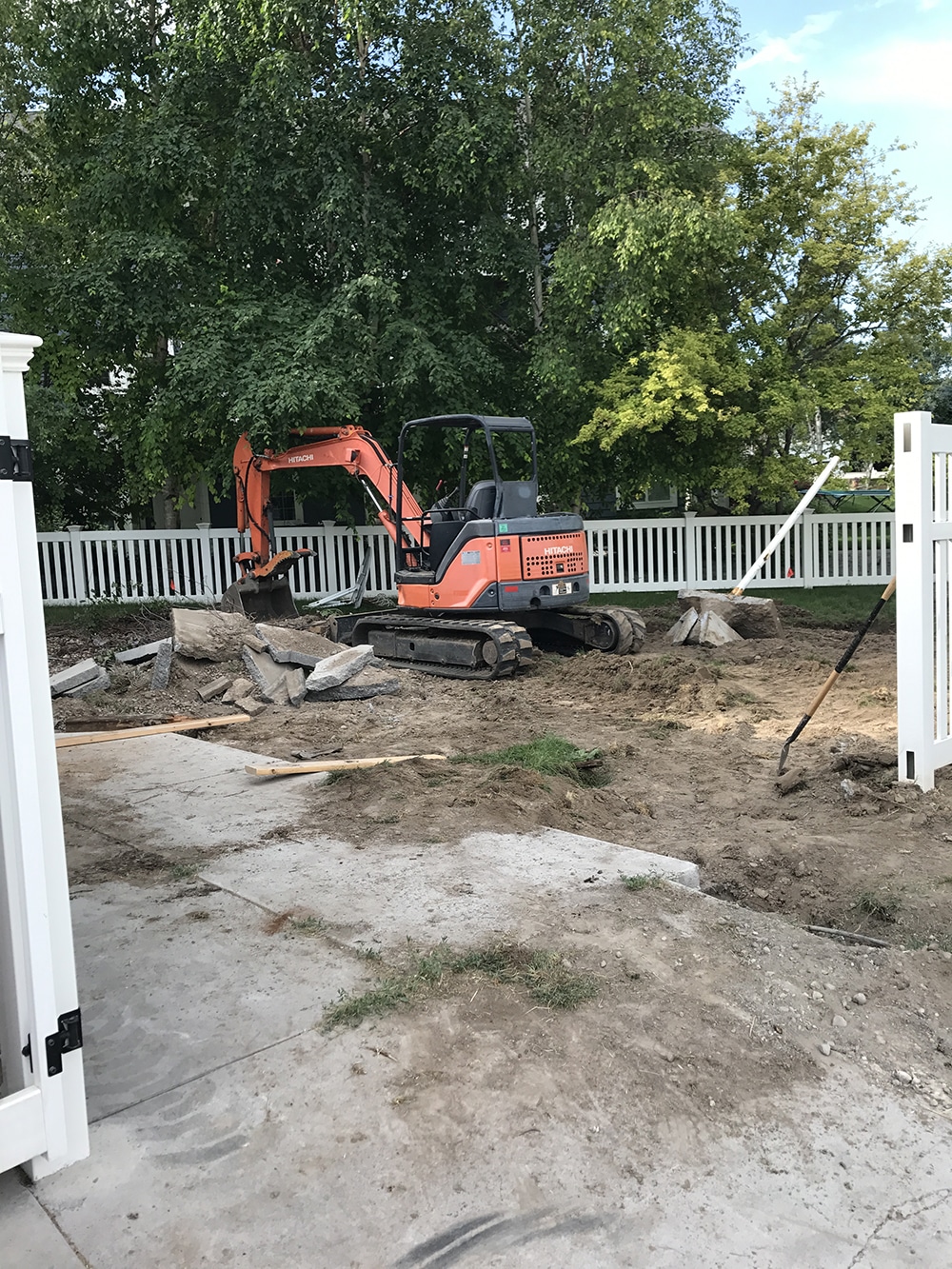 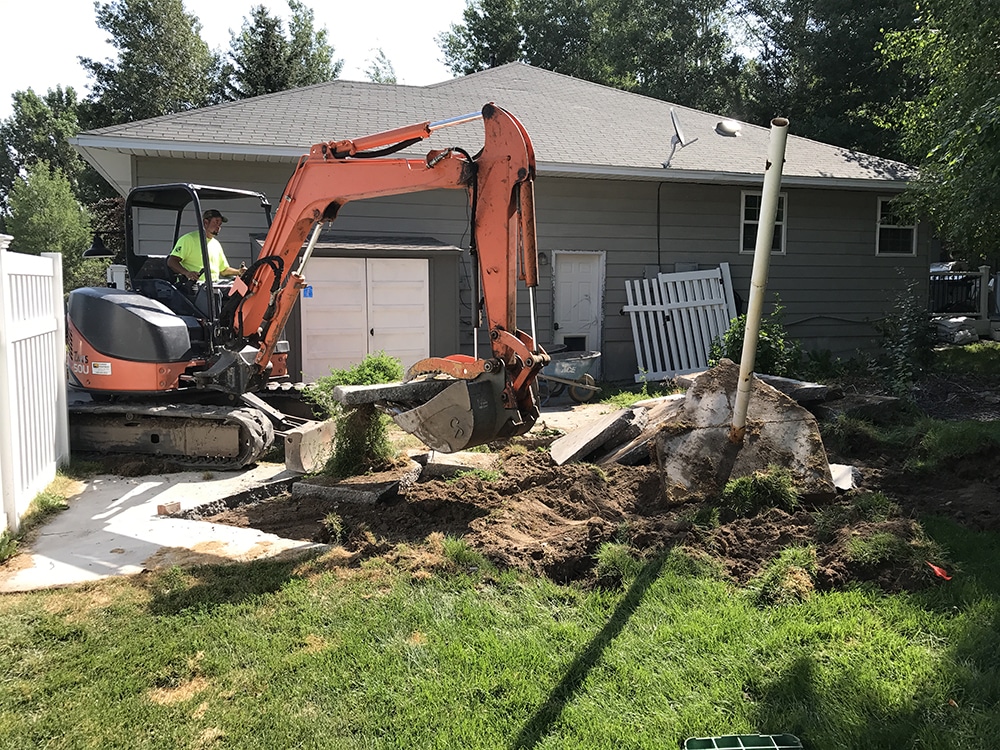 By the end of day 1, everything that was going was gone. The shed was moved to the other side of the house, the concrete was cut, the debris was removed and they had even started digging in the hole for the in-ground trampoline. 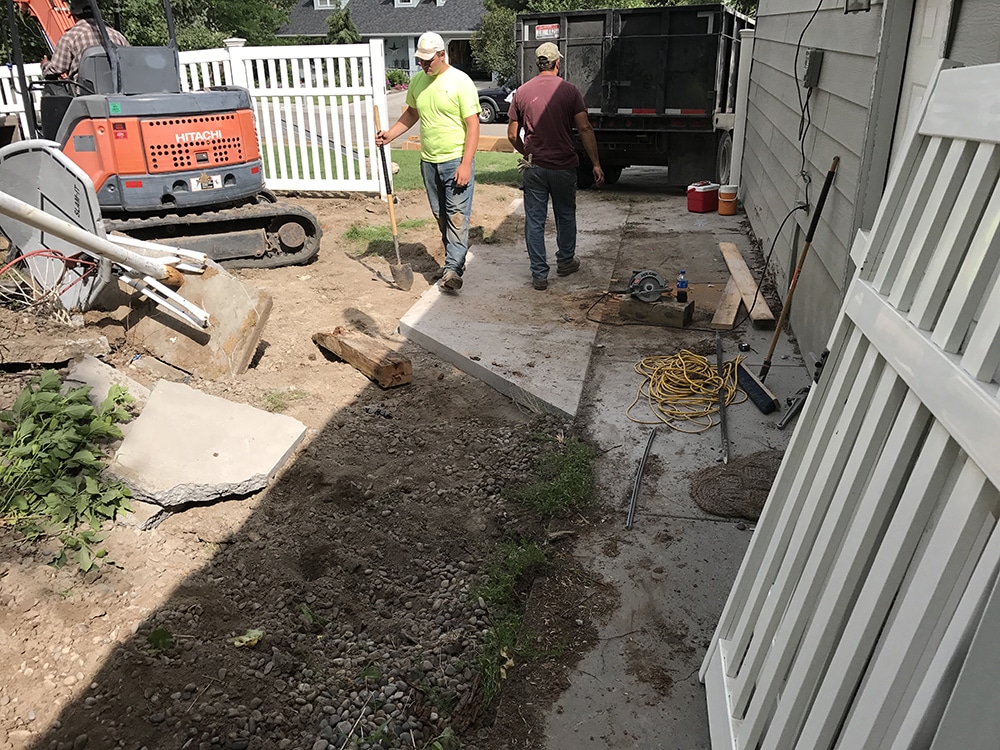 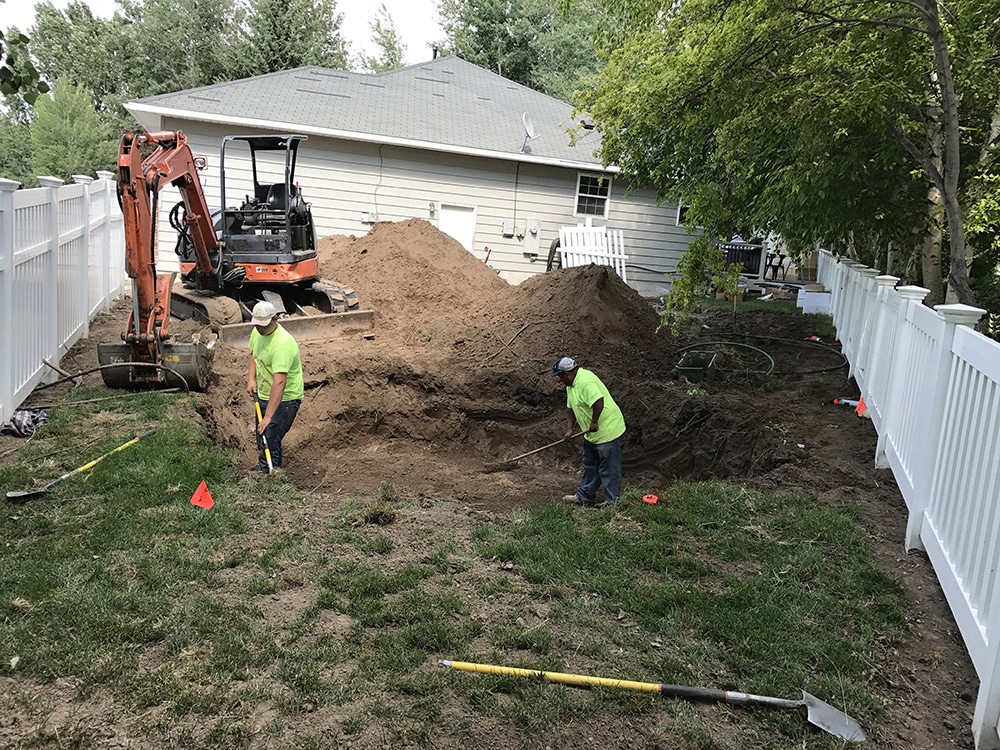 The girls have been using our 8′ diameter trampoline (that used to be in our basement) without complaint, but they are definitely growing out of it. We’ve seen sunken trampolines before, but were happy to turn over the vision to our landscaping team. They frequently used a company called, Trampolines Down Under, that fabricates trampolines made to be ground level. It’s a little pricier than a traditional trampoline, but it comes with a retaining wall and even has venting so it can truly be ground-level without sacrificing height while jumping (a reason some people leave dug-in trampolines slightly above ground when DIYing the look). 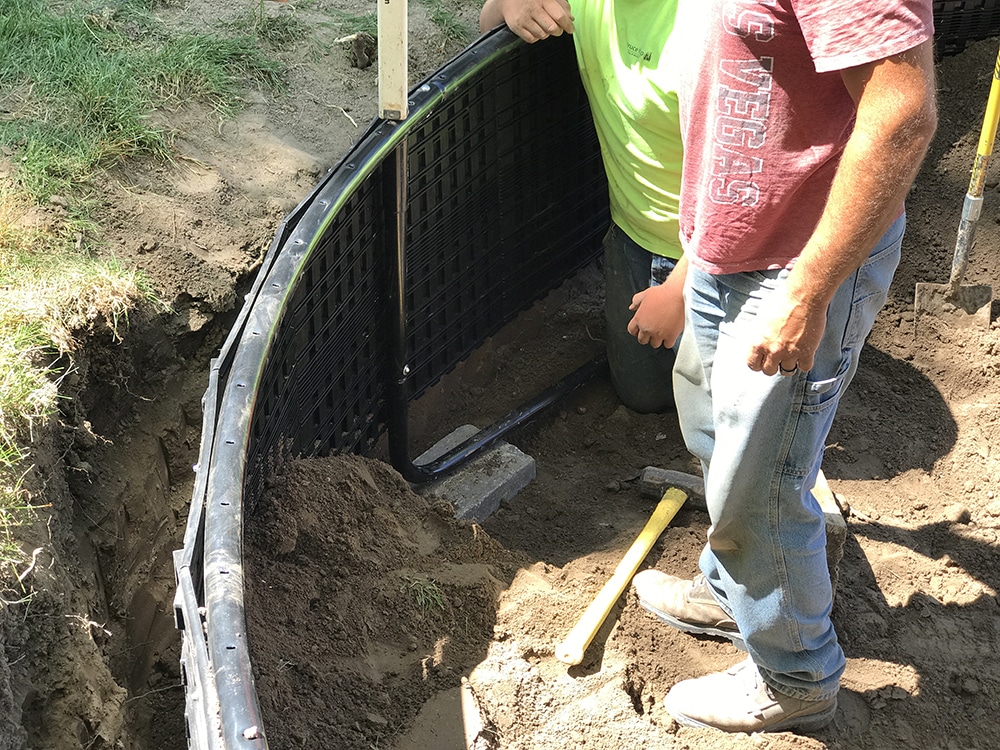 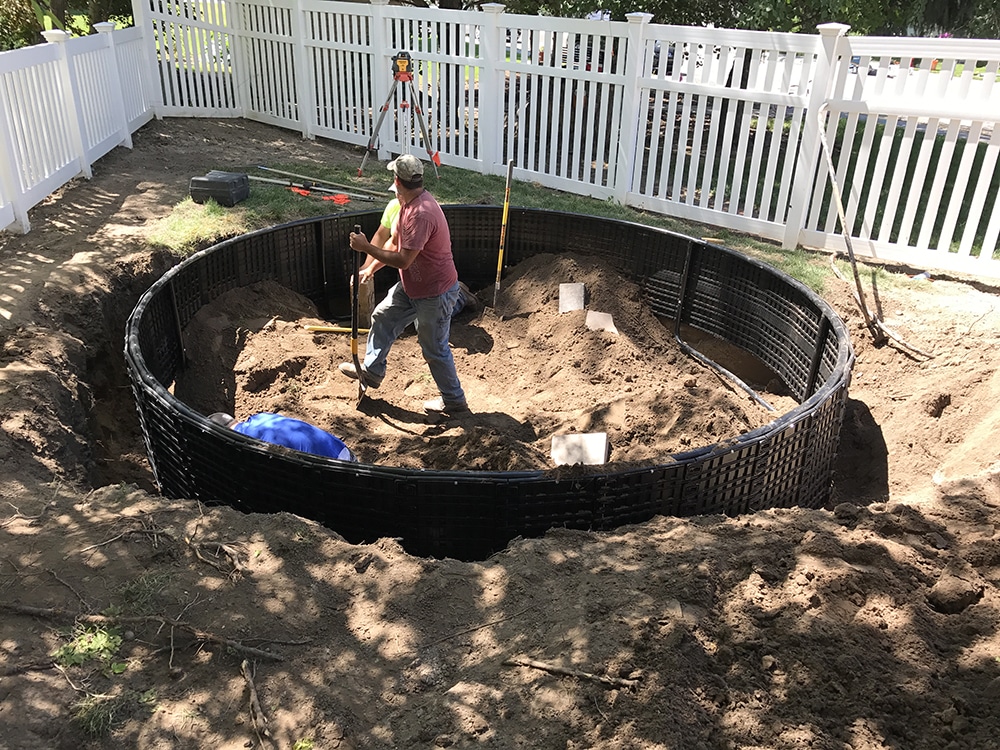 The crew told the girls they would have a new trampoline to jump on by the end of day 2, and they made good on that promise. Even with a huge dirt pile surrounding them, they were already in heaven. 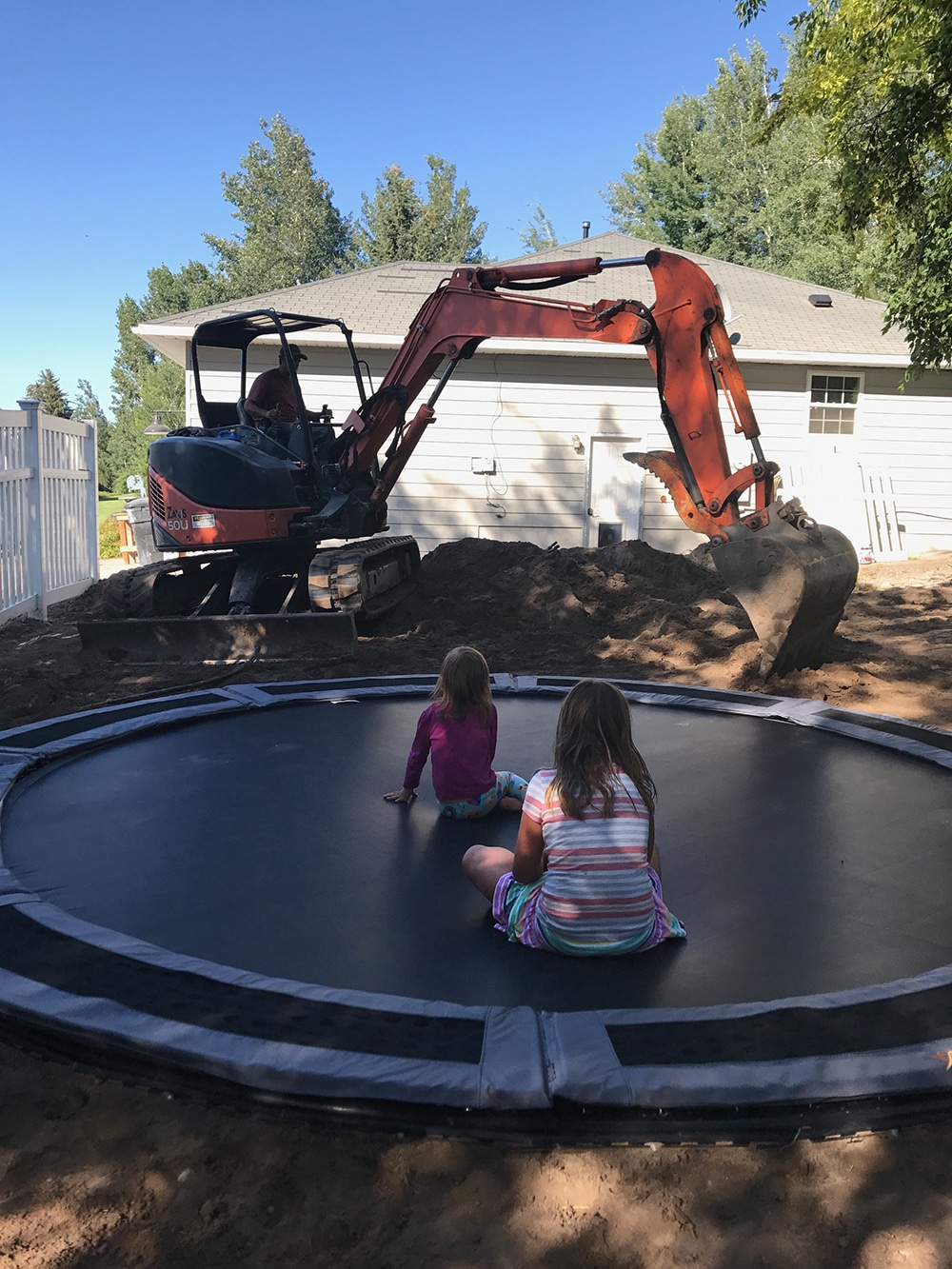 The next morning, they started setting up for the play set install. The whole area had to be leveled and surrounded by “sun ties” as our landscapers called them. They are landscaping-safe and look a lot like super light railroad ties (which aren’t recommended for landscaping purposes). 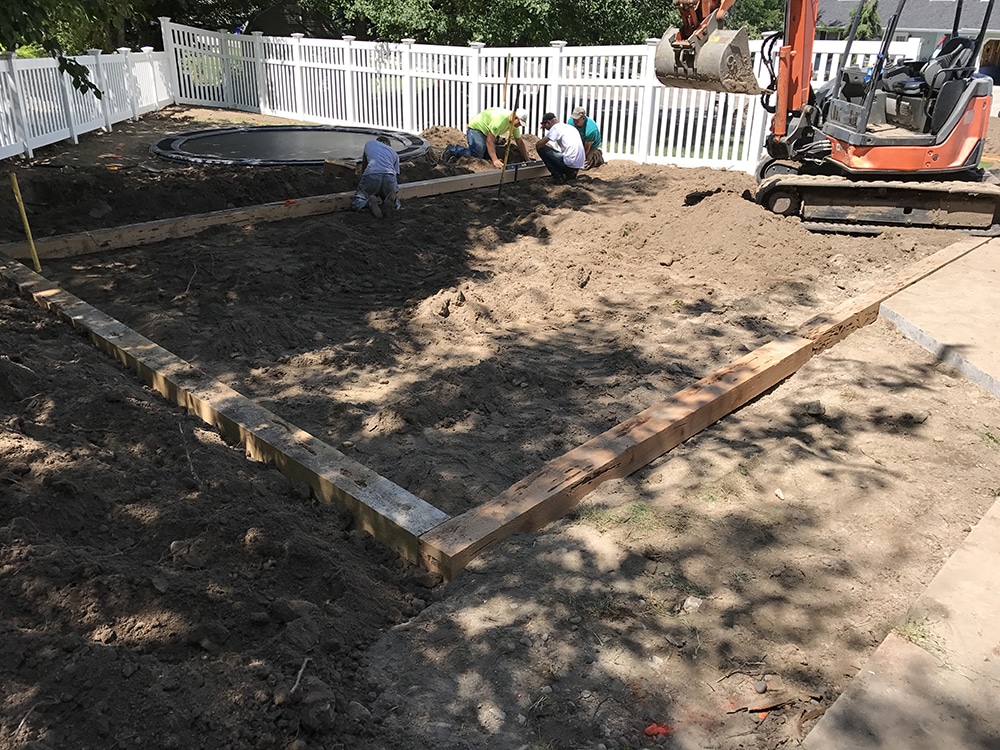 Weed-blocking fabric went down and the playset starting going up. We did a lot of research on play sets, considering dimensions and weight accomodations and finally landed on the Malibu Extreme Swing Set by Gorilla Playsets from Wayfair (which they graciously sent to us). We love the double slides, the solar lights that turn on automatically when the sun starts to set, the pretty gables on the roof, and Gorilla play sets accommodate older children, too. Which was important to us since Greta, 7, is already the size of a 10 year old. And seeing grown men crawling all over it during the install definitely gave me peace of mind that it will work for our family for many, many years. 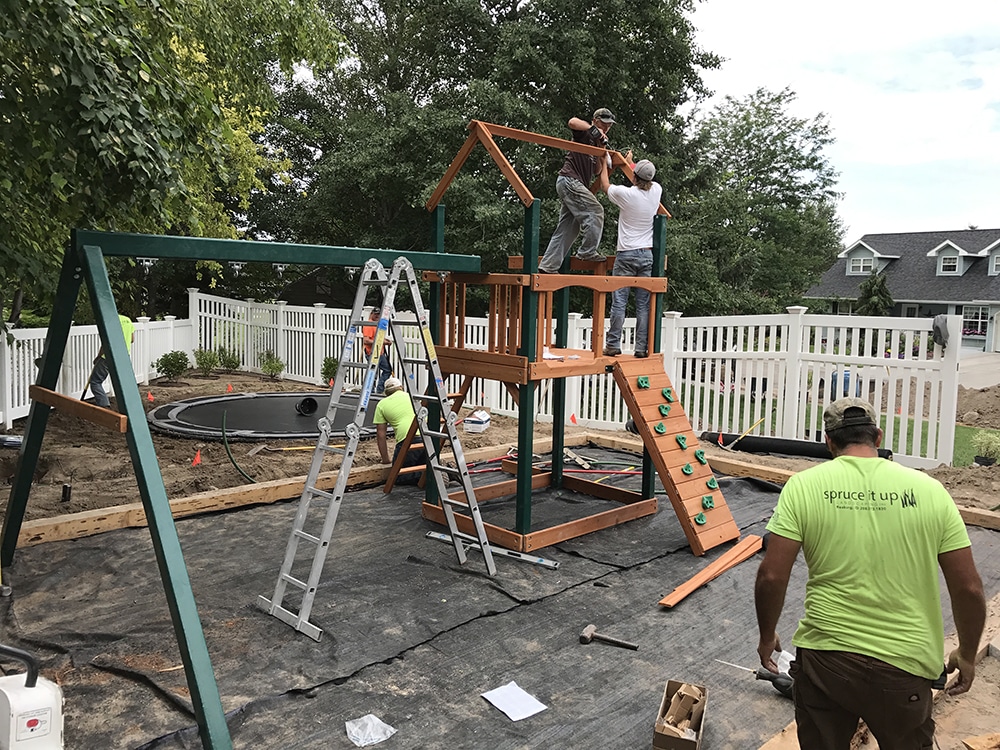 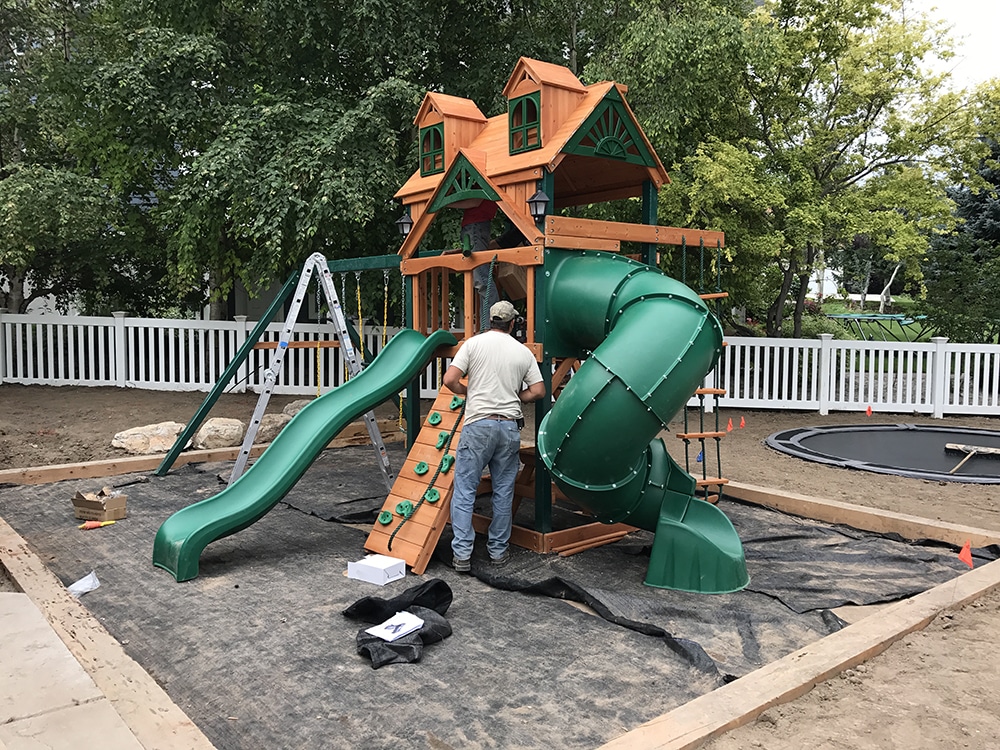 With the play set and trampoline in place and in working order by the time the weekend hit, the girls were over the moon and content, which meant Chris and I were already seeing the benefits of doing this huge project!–but we were also anxious to see the whole thing done. We really wanted to create a beautiful play area with lots of texture and plants and knew that landscaping was going to change everything. You can already see the placement of some boulders on the far end of the play set to help off-set the change in elevation, but there’s so much more to come.

We’ll talk more about that in part 2! 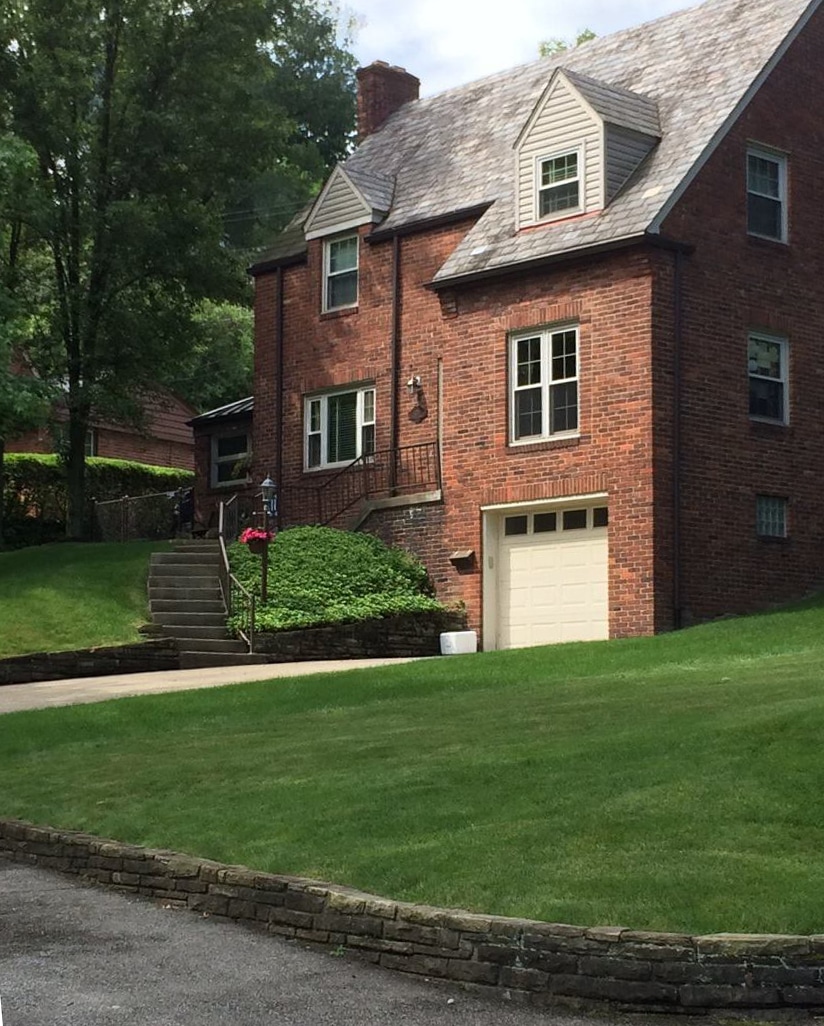 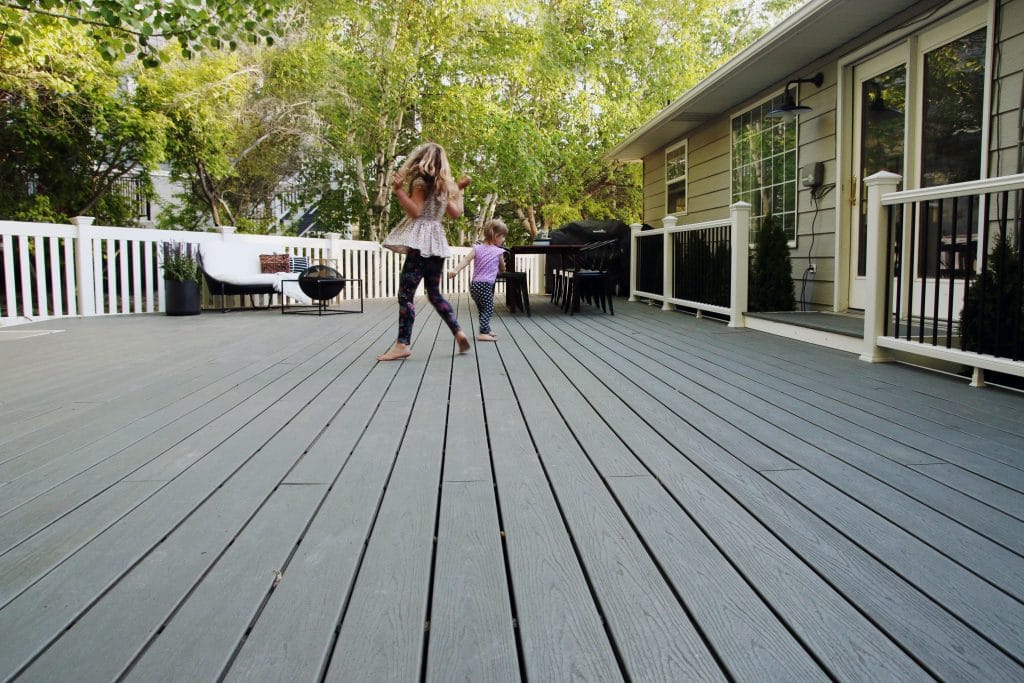