Last week we shared a Valentine’s Day Gift Guide, which was so fun, and we got a few requests to put together a date night guide. 2020 hasn’t been our year to “go out,” but when it comes to date nights, we honestly like to keep things casual – are you surprised, us being the homebodies that we are? There’s nothing more fun than making a big ol’ charcuterie board and binge watching a show together. When Chris says, “‘nother episode?” it’s thrilling!! Yes! Keep! It! Going!!

This last year especially, we’ve spent a lot of hours binging some of our favorite shows (as I’m sure many of you have), and we wanted to put together a list of our our favorites we watched together. Because yes, I loved Brigerton. But I didn’t watch it with Chris. And Chris loves Mandalorian. (But that isn’t my thing.) So we put our heads together and made a list of our top binge-y shows to watch together! This was honestly harder than we thought, because there’s so many good ones out right now, but we narrowed it down to 16. So slide into your favorite homebody sweatshirt, grab a bowl of popcorn, and enjoy. 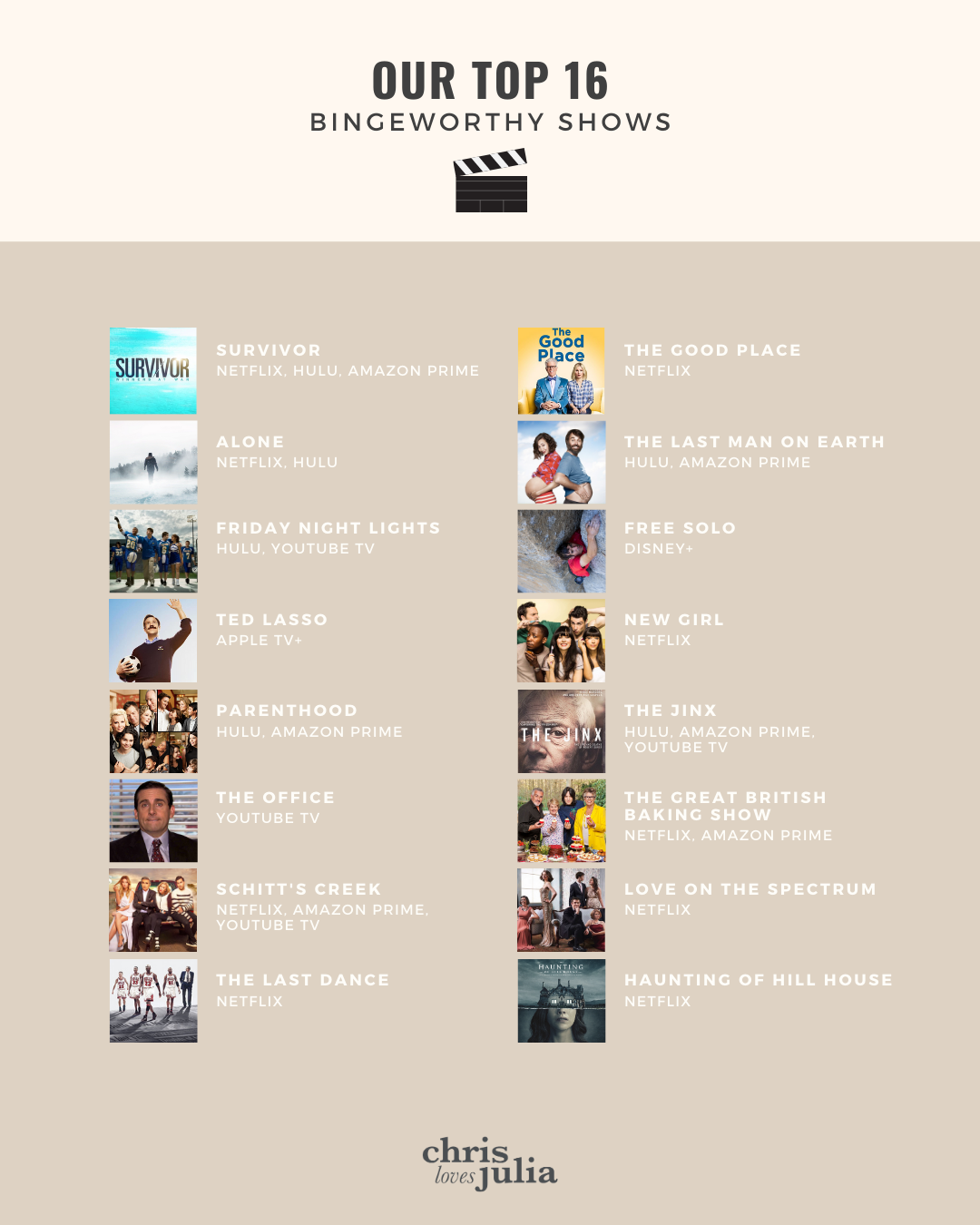 Survivor – Netflix, Hulu, Amazon Prime – We are among the few that didn’t watch Survivor growing up. In fact, the latest season is the first that we watched in real time and it was torturous to wait a whole week! This is a really really fun binge show because there’s about 13 episodes in a season and nearly every one ends with a cliff-hanger. We have followed this guide to the best seasons and stayed in the top 15, but went in order from earliest.

Alone – Netflix, Hulu – This is another reality show that’s so mind-blowing to us. Think survivor, but it’s you against you. Just how long can you stay out in the harshest climate on earth, hunting your own food, making your own shelter, all by yourself. Oh, and it’s always cold. It was fascinating watching each contestant battle the mental over almost everything else. Highly highly recommend it!

Friday Night Lights – Hulu, YouTube TV – Texas forever, am I right? This is feel good and drama and high school football all wrapped into one and one of our favorite series ever (and we aren’t even sports people!)

Ted Lasso – Apple TV+ – This is a quick binge and so heart-warming, honestly. Football coach, turns soccer coach. It’s inspiring and funny and Ted is impossible not to love.

Parenthood – Hulu, Amazon Prime – Everyone wants to be a Braverman, right? I mean, right? Parenthood is one of the best series ever created and in the midst of being highly entertained, you’ll probably pick up some communication and life skills.

The Office – YouTube TV – No explanation needed. We always keep the Office in our back pocket because the episodes are only about 22 minutes so if we need some comedy relief after watching something particularly heavy or scary. But then we also find ourselves watching the entire thing every other year, too. Soooo….

Schitt’s Creek – Netflix, Amazon Prime, YouTube TV – “Moira” and “David” are now a part of my every day vocab. We laugh. OUT. LOUD! and reference this show almost daily. It’s just a part of us now.

The Last Dance – Netflix – If you think this is only for basketball fans, you’re gravely mistaken. Remember us? Not sports people! And yet this documentary on Michael Jordan was one of the best things we watched last year. It was motivational and eye-opening and now we just say things like, Pippen!, and feel cool. It’s on our re-watch list already. You really really must.

The Good Place – Netflix – Witty and Clever, plus Kristen Bell is just a gem. I’ve recommended it to a few people and they have come back and said, “I just can’t get into it.” But here’s the thing—you HAVE to give it to the end of season 1 and then you’ll be hooked. ;)

Last Man on Earth – Hulu – Absurd and hilarious. This is probably Chris’s favorite show. He does this cry laugh where he can’t breathe and squeals which makes me laugh even harder. It’s comedy gold!!

Free Solo – Disney+ – Not a series, but a really thrilling documentary about rock-climbing without any safeties! It’s 100 minutes of pure nail biting adrenaline.

The Jinx – Hulu, Amazon Prime, YouTube TV – The Jinx is not new but there’s still so many people that haven’t seen it and YOU HAVE TO WATCH IT. It’s a documentary and we had to pick our jaws up off the floor – over and over and over again. It’s the most bingeable show of all time.

The Great British Baking Show – Netflix, Amazon Prime – This might work best for us, because Chris likes to cook, but when you want something light and kind and sweet-this show is all of that plus accents, sensory appeal, and pastels.

Love on the Spectrum – Netflix – Start it to have your eyes opened – stay for Michael.

Haunting of Hill House – Netflix – I’m not into scary anything but Chris got me to watch this and while it was quite scary, it was also incredible great story-telling. It was beautiful. Thrilling, but also, can’t look away. I hear the new one is really good, too!

Of course, now we need to hear from you! What do we binge next? 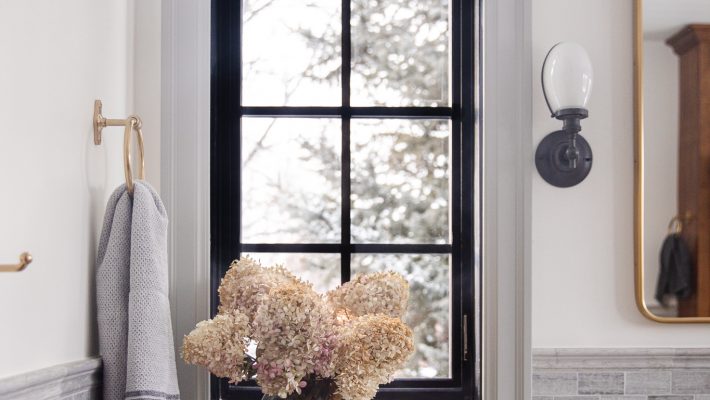 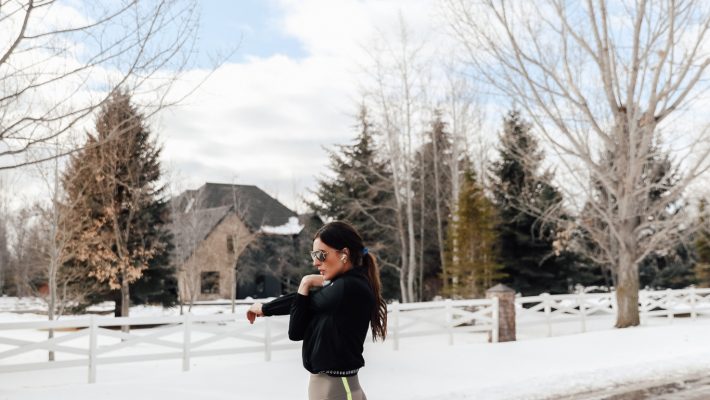