Our Love, Our Lounge

This weekend we really, REALLY weekended (it’s a verb now).  With the arrival of our new couch that we ordered months ago, we decided to take it for a major test drive.   For the first time in 3 and a half months–we sat on a couch and watched television.  Of course not alllll weekend–but for a good couple hours and it was positively blissful.  We forgot what it felt like to chill. Veg. Relax and just watch television in comfort.
To catch up the newcomers– a few months back, when we first decided to renovate the family room, we started the hunt for a new couch.  Because Chris and I are both tall (6’4″ and 6′ respectively), normal couches are only comfortable for us for a short while and we have to be sitting pretty straight or our bums hang off.   Finding a deep couch was the name of the game.  After a few weeks of searching and testing, we landed on Crate and Barrel’s Lounge Sofa and ordered it in a light gray microfiber.  That was all back in February.   Crate and Barrel custom made the 93″ couch and it arrived in all of its glory for our eager, tired, tall selves on Friday: 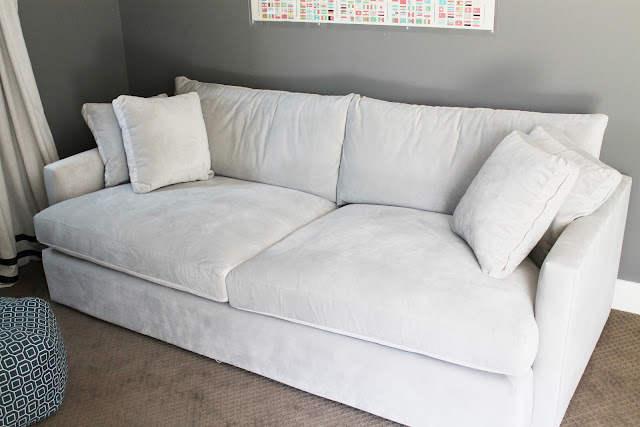 In case you are thinking it doesn’t look that big, let me put it into perspective: 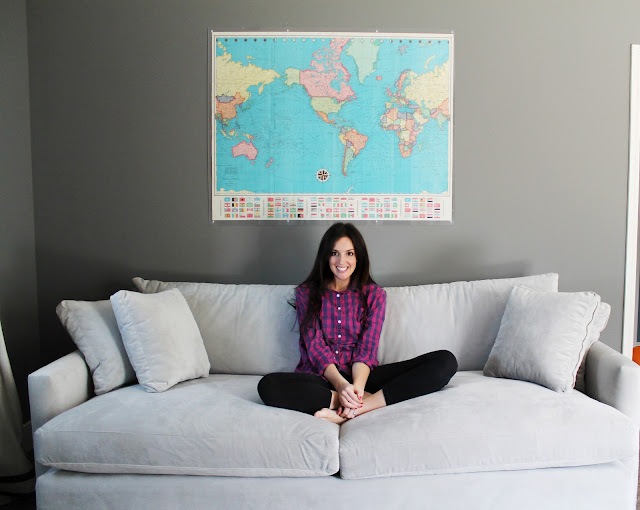 That’s me and my 6′ self easily curled up in the middle of the couch.  Chris, who has 4 inches on me, can do the same thing.  Well, he may not be able to cross his legs like that (ha!) but he spent some time curled up on the couch this weekend feeling like a little kid, again.  It’s spacious and cozy and we have no regrets dropping the money we did on it–which was initially terrifying because it was pretty much half the budget of the entire room reno.
We set aside $4000 to renovate our family room and the 93″ Lounge Sofa on Crate and Barrel’s website is listed for $1699.  Tax and delivery brings the price up to $1892.74.   Ouch.  Wanting to conserve as much of the budget as possible, I went on a coupon hunt that landed me on Ebay where there were several people selling 10% off Crate and Barrel coupons for around $5-$7 after bidding ended. Seven dollars may seem extreme for just 10% off, but not when you are dealing with thousands of dollars, so I snatched one up.  The coupon took $169.90 off of the total, leaving us with the final price of $1722.84–around $24 over the listed price–which made me feel better about the couch and the extra pillows I would have money for now. 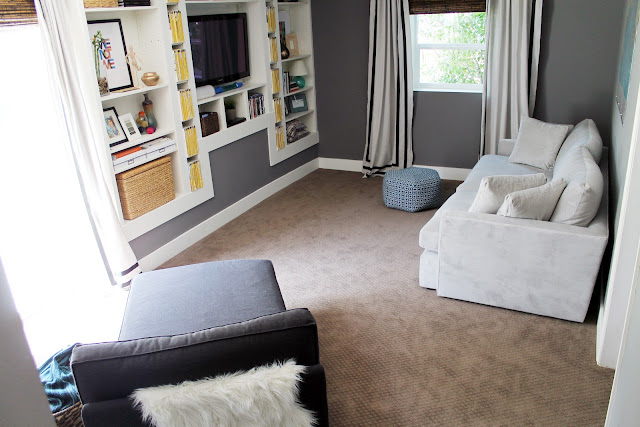 Now that the couch is here and in place, we can better assess what the space needs.  We both agree now, the map isn’t right for above the couch, so art for above the couch is on our minds.  We are also on the look out for lamp(s), pillows, and possibly even a coffee table to finish up this room.  Here’s hoping we can pull it together this week!

Anyone else have a lounge-y weekend?

Reader’s Choice: This Little Light of Mine »

« Pretty Couches and almost Not Couch-less