Progress is happening so fast in the kitchen, I can’t wait to show you how things are looking there later this week. But, today I wanted to share about our experience designing and buying an Ikea kitchen since we picked up our cabinets over the weekend.

We started designing our kitchen when we moved into our home two years ago really, but only started working things out on paper late last fall and into the winter. Initially, we just used good ol’ fashioned paper and pencil to get a visual on how we wanted to rearrange our walls and layout. We knew Ikea was coming out with their new Sektion cabinet line (and discontinuing their old one) in February 2015 so we were holding out on using their kitchen planner until then.

When Ikea came out with their new line, their kitchen planner was also simultaneously updated so we dove in and came up with this design we shared with you earlier this year: 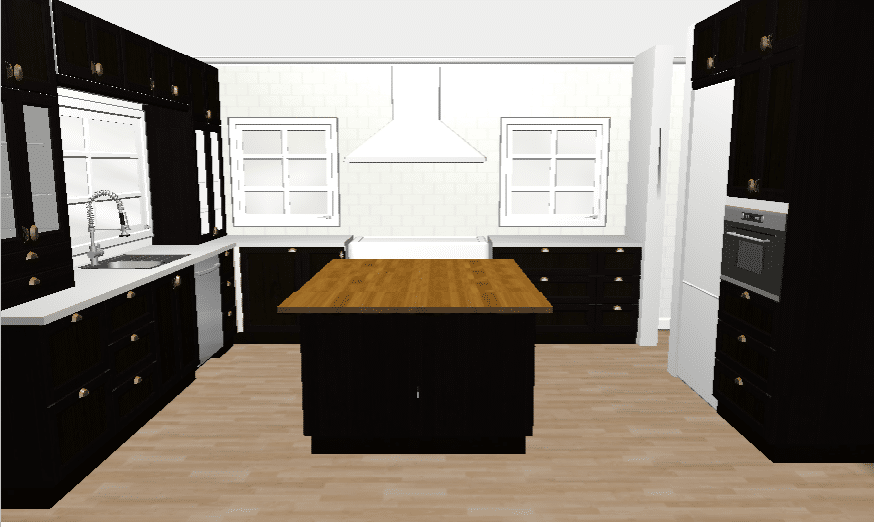 The plan was to purchase the cabinets during their 20% off kitchen sale in April, but that was before we knew Chris’s back surgery wasn’t going to be covered and we had to push back our kitchen remodel until we got that all sorted out. As much as not saving that money hurt, the extra months we had to sit on our design really made a difference. We continued to realize some things about the above design wouldn’t work or we didn’t like or didn’t make sense. So, last month, about 6 months after we initially designed what we thought would be our kitchen, we went back to the drawing board and tweaked just a few things and came up with this: 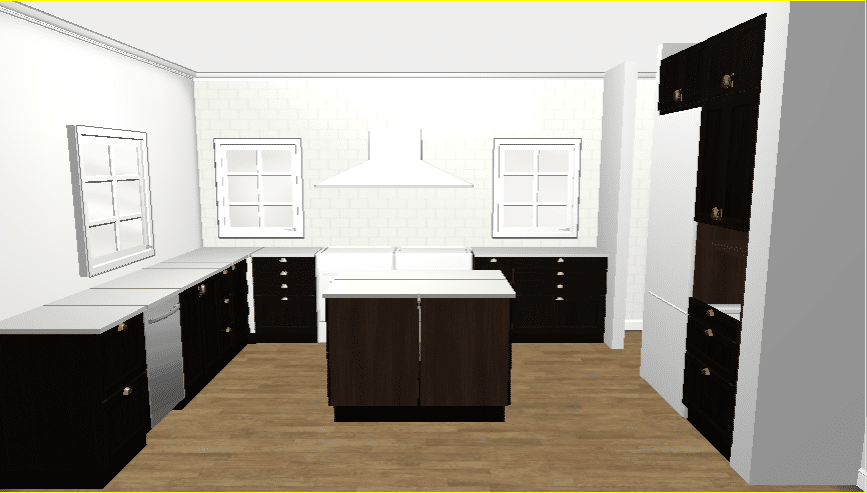 A few notable changes: we nixed the upper cabinets on the left hand side in favor of open shelving (not pictured). While it’s not for everyone, we realized how much we loved, utilized and missed the open shelving from our last house’s kitchen and decided to include it here, too. We also moved the dishwasher to the other side of the sink, per a reader’s suggestion (thank you!), so it would be easier to load from the dining room table without disrupting any cooking going on. We also opted for a few more shallow drawers for tongs, tupperware, cooking utensils, etc. instead of deep drawers where all that might get lost. A couple things you can’t see from just the rendering is how we utilized the new drawers within drawers that the Sektion line offers. Let’s put a small drawer at the top of the trash can pull out for trash bags! We really went through all of our kitchen stuff and made sure there was a place for everything that made sense and was conveniently accessed and stored. And lastly, we decided on two 30″ gas ranges instead of a 36″ or 48″, which will give Chris, I mean us ;), two full-sized ovens–but that’s an entirely different post!

Now, I’ll be the first to admit, the above rendering doesn’t look nearly as refined or warm as the first one, but it’s because it’s more stripped down to just what we would be picking up from Ikea (minus the dishwasher and hardware shown). The kitchen you create in Ikea’s kitchen planner is where the store pulls the actual itemized list of things you’ll be picking up. It also shows what your total is. So to give ourselves the most accurate idea of number of boxes and how much money we’d be forking over, we intentionally kept it very basic. 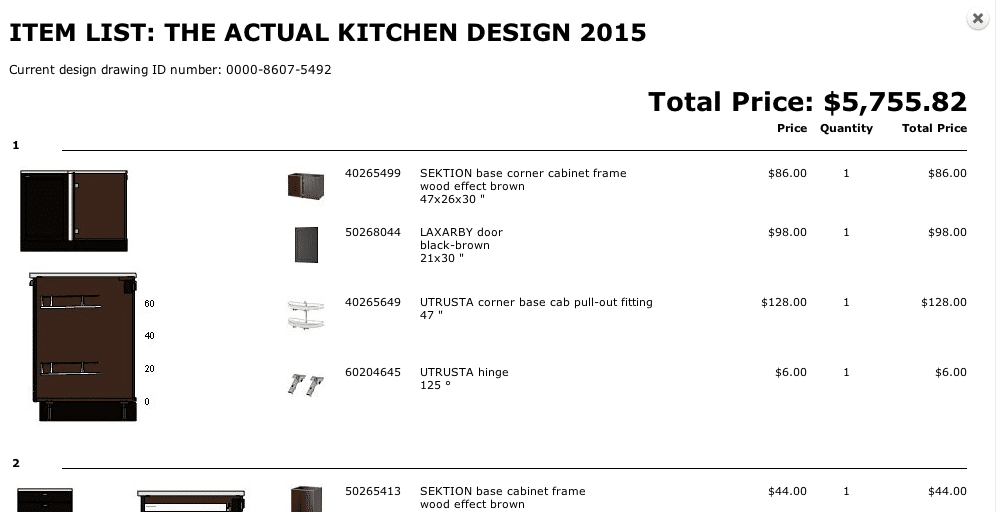 The above total was pre-tax and included the dishwasher, hardware and countertops, none of which we actually purchased from Ikea. On Saturday, our actual total was around $5300 after tax.

We live 4 hours away from our nearest Ikea, so we went down with the girls Friday night and stayed with Chris’s brother who lives, literally, less than 3 minutes away from Ikea. They were generous enough to watch the girls on Saturday morning while we went to buy our kitchen cabinets. We got there as soon as they opened and felt like we wanted to do one last walk through of their kitchen showroom to make sure we really liked the corner cabinet we picked out and to see if there was anything else that caught our eye. It was the final run through before our laundry room pickup that made us add an open shelf under our cabinets–one of our favorite parts! 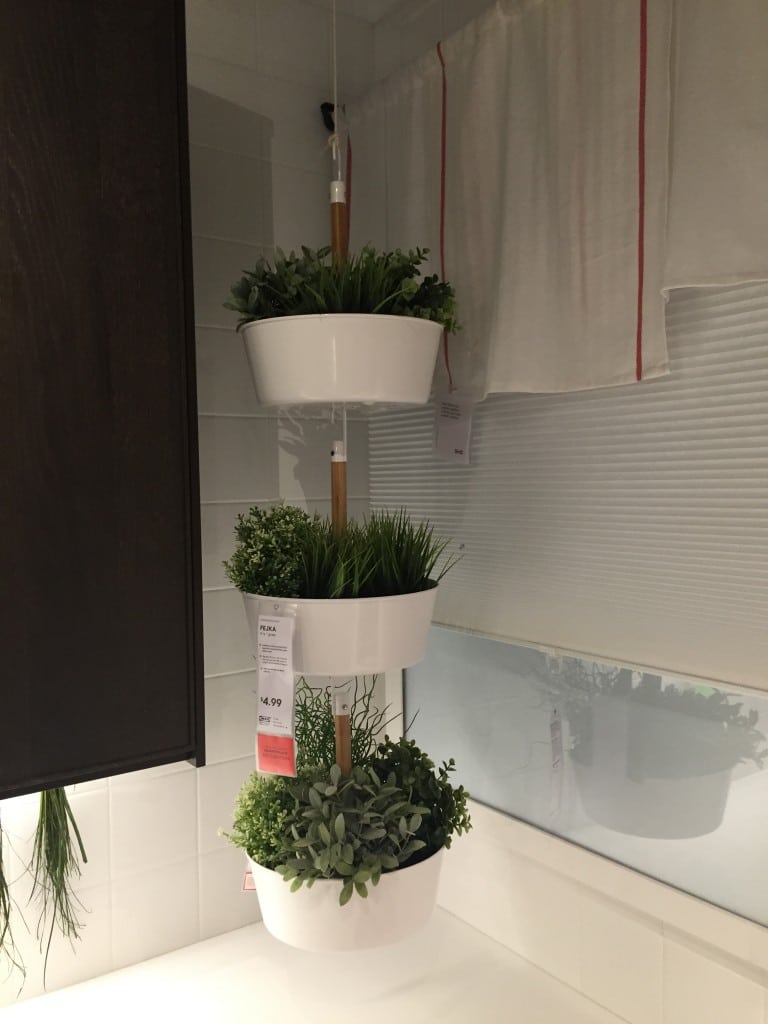 We took about 30 minutes to do this and came away feeling more confident about that corner cabinet we chose for the kitchen, put a few of the planters (pictured above) in our cart for herbs, and made a few more last minute tweaks. 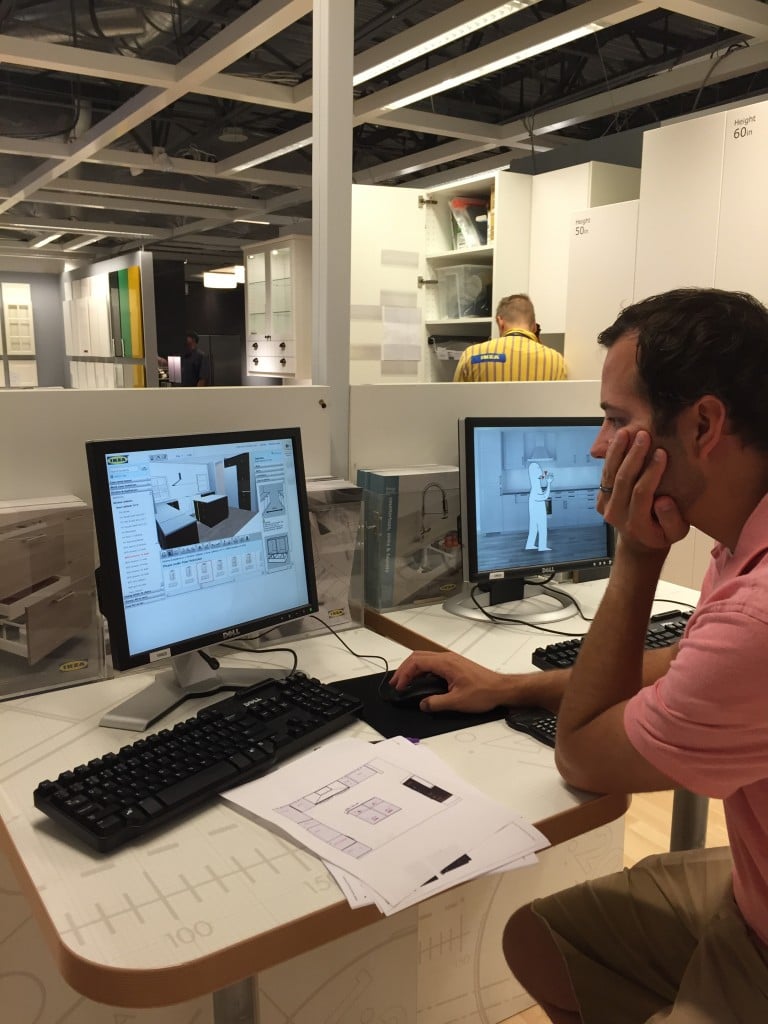 We logged onto our account on one of their computers in the kitchen section and pulled up the kitchen design we had saved, made a few minor adjustments that would make the drawers in our island 18″ and 24″ (instead of 15″ and 30″) which gave us room for 2 trash bins in the 18″ pull out, instead of just one in a 15″ and also a couple more inches of leg room in the overhang–which means the world to us long-legged folks.

Once we were finished, we flagged down the Ikea employee over the kitchen section and told him we were ready to buy our kitchen! It was actually the same guy that helped us with our laundry cabinets a few months ago, which meant we were greeted with the same knowledgable Australian accent. He pulled up our order number on his computer which had our whole kitchen in list form instead of the visual. Now at this point, we had been stewing over our kitchen for years, designing it for months and finalizing it for weeks. But, I am sure not everyone comes to Ikea that prepared and it’s clear this guy knew his stuff. Even as prepared as we thought we were, he was still able to find a few things that were missing just by looking at our itemized list (enough legs, cover panels and filler pieces) and even found a couple mistakes (one random off-white filler piece listed). He deleted the things we weren’t going to be needing (that hardware and the dishwasher) and was crucial in making sure our master list was correct and complete. We are so grateful for his expertise. 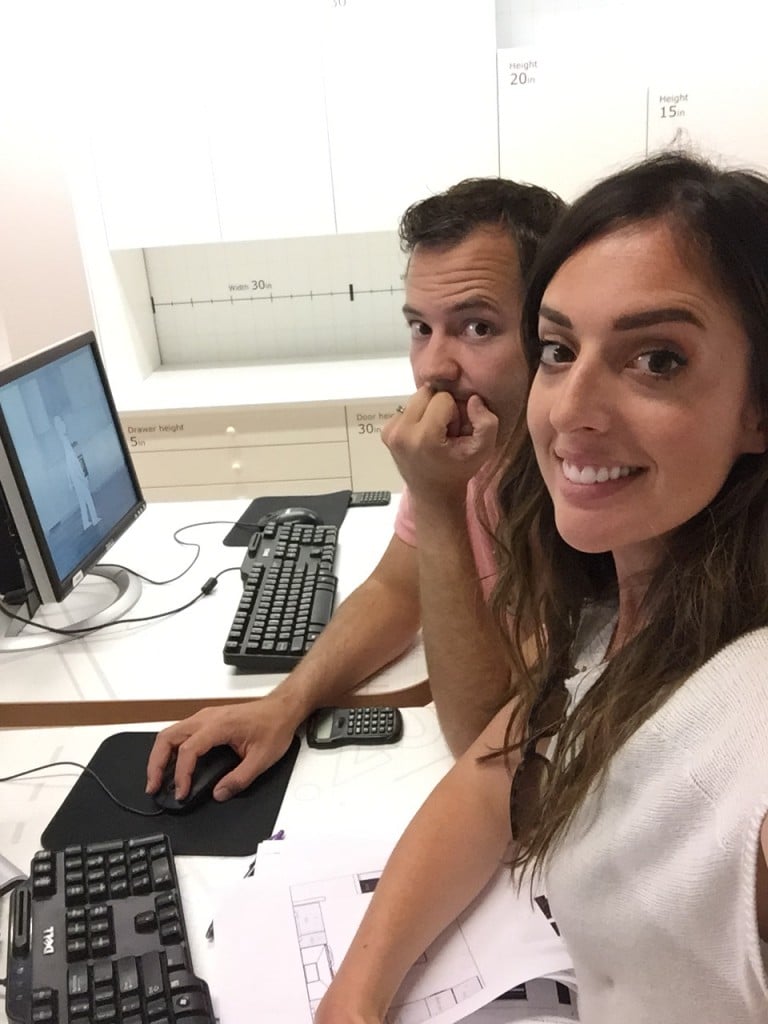 After our sit down with him (that took about 15 minutes), he printed off a master list for us to keep that shows what item numbers go together for each cabinet and another list with a barcode on it that we would check out with. He said we could pay right there even, but we wanted to run through the marketplace and get a few more things. In retrospect, we should have absolutely checked out right there and immediately brought the list to the customer pickup so they could get started. When we finally did, they told us it could be 45-90 minutes before they would have our order ready but it was over 2 hours!!! My advice: get your order paid for and processing ASAP and then take your time walking through the store.

When our order was finally ready, they assured us that they triple checked to make sure everything was correct, but we were welcome to compare the item numbers on our list to the boxes, OR there was a box count listed and we could just make sure there were the right amount. We decided to trust them but still count the boxes. All 143 were there. 143!! 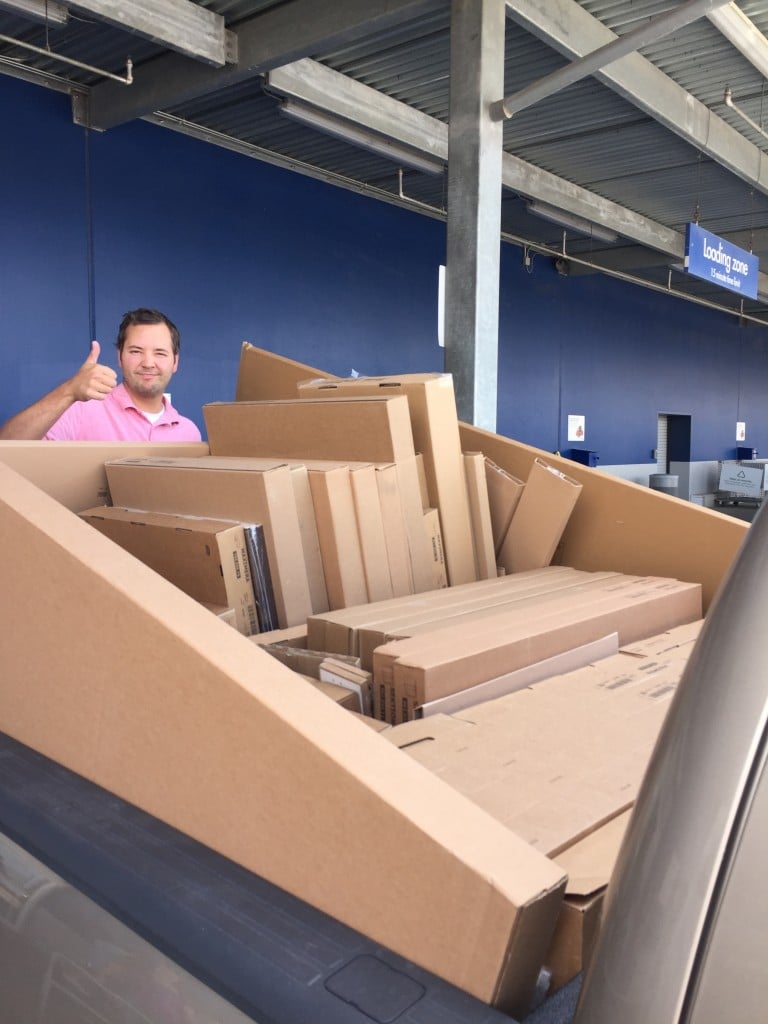 The last leg was getting them all in our truck, which took about 45 minutes more but we did it! All in all, we were at Ikea from 10am to almost 3pm and then we picked up our girls, grabbed some lunch and headed cautiously back home.

We have a few more things to do in the kitchen before we’re ready for cabinetry, but if all goes well, we’ll be doing that next week and we’re actually pretty excited about it. Putting together Ikea stuff has always been fun for us, and although the sheer amount is a little overwhelming, there’s nothing quite as motivating as an empty kitchen. 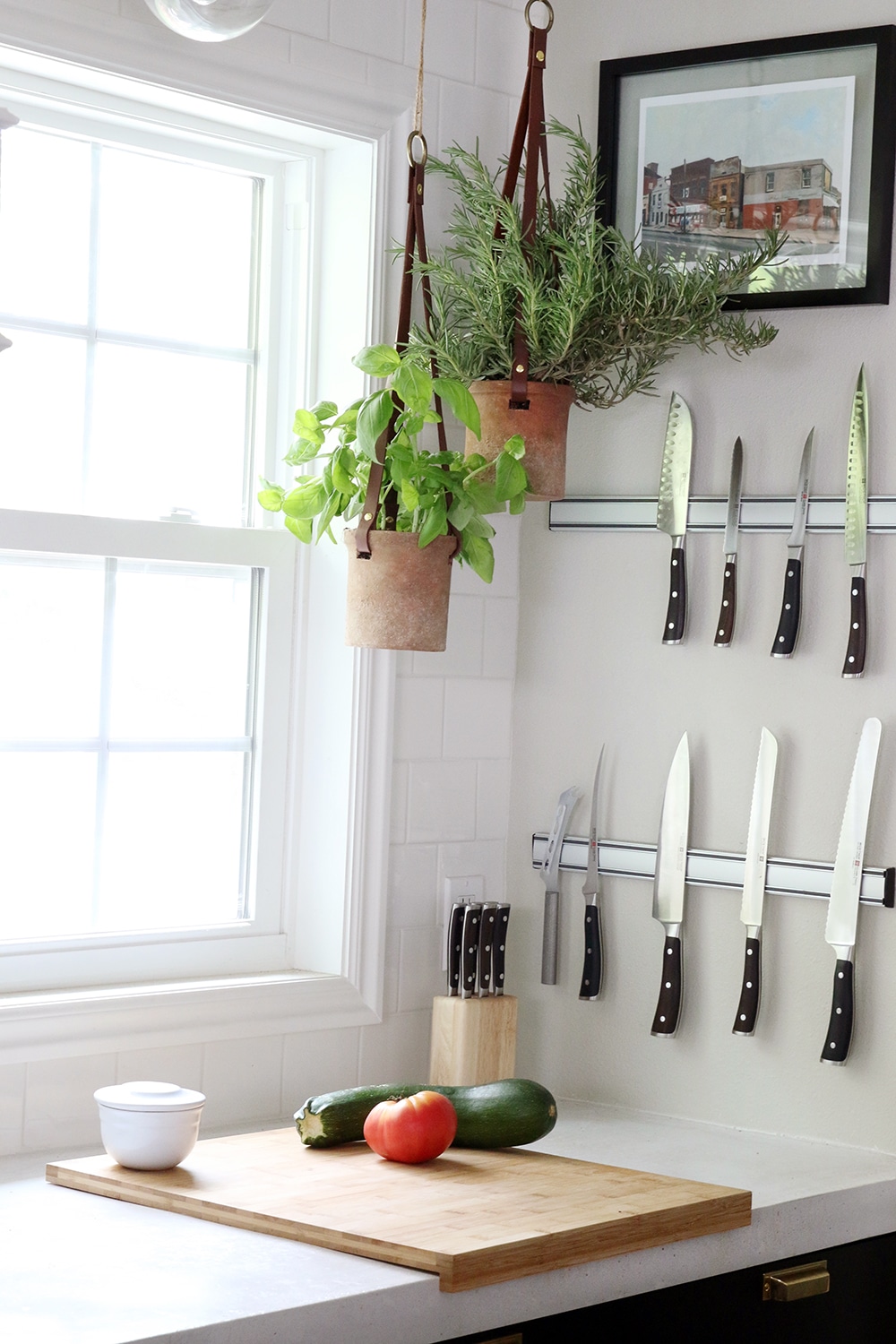