When we revealed our new paint color for the family room, we were so happy that so many of you loved it as much as we did.  There was one issue that the paint color did bring up, that I was trying to avoid thinking about fixing it.  However, when one of our readers brought it up–I knew it wasn’t just me who was bothered by it:

The darn railing was completely clashing with our new paint color.  I knew it.  Chris knew it.  And Missy knew it.  I’m sure a lot of you were thinking the same thing.  Last June, I painted the small divider railing a medium gray and the large staircase railing, too.  It was pretty tedious, but free with a coupon for a free tester pot of Benjamin Moore paint–the results were worth it: 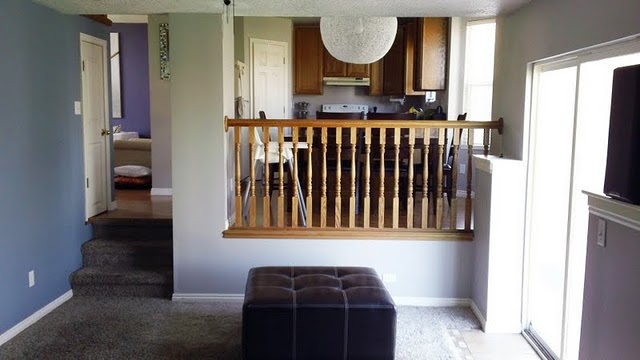 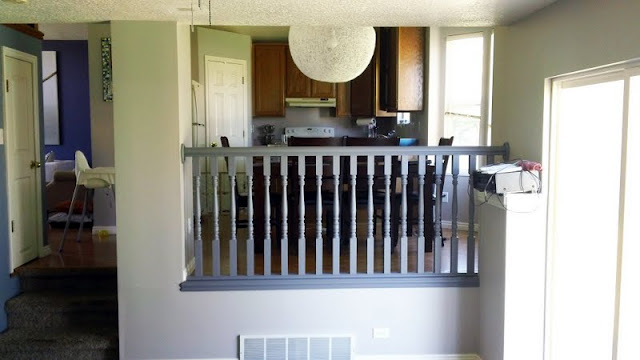 With the new paint in the family room, Martha Stewart’s Zinc, it suddenly didn’t look that great: 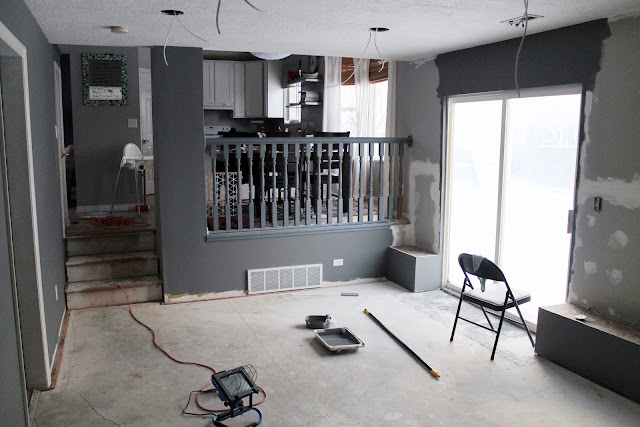 Not only was there a gray overload, but the grays were clashing.  I wasn’t lying when I told reader Missy that we do have plans to switch out both the staircase railing and this divider rail–we do.  Right now, we just don’t have the budget for the look Chris and I both have been eyeing and I have been pinning like this example via Houzz: 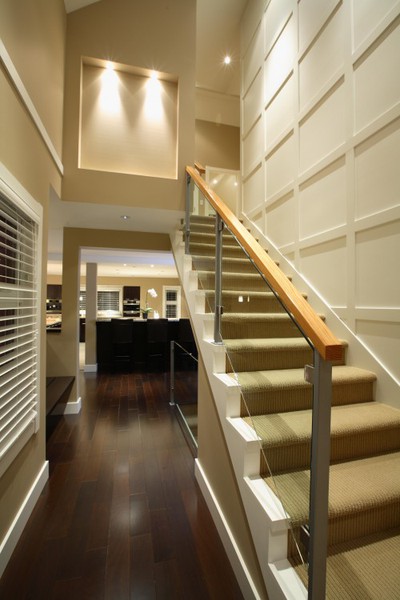 Until we have enough pennies saved for the clean-lined and clear railing of our dreams, we will have to live with the current railings.  But that doesn’t mean we have to live with a clashing-color railing.  A few minutes after I responded to Missy’s comment, I got a text from Chris that said, “I think if we’re going to wait to paint the railing a different color, we should do it before putting the bookcases up. Thoughts?”  It wasn’t what I wanted to hear, and definitely not what sounded like a fun time–but at that point we both knew that it needed painted and it would be easier done before we build the bookcase on that side of the doors. 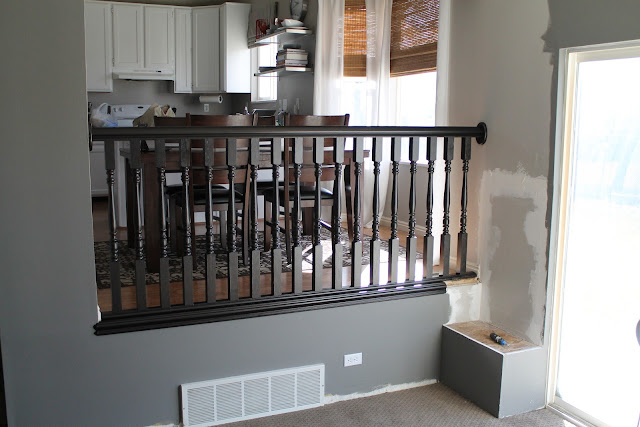 When Chris asked how I like it, I responded with a “Hmmmm.”  To which he quickly replied, “Oh great.  What color are we re-painting it?” Ha!  Well, we aren’t re-painting it, that’s for sure.  It’s better than the clashy gray, but I still can’t wait to replace the railings all together.  I think it is the busy railing that is bothering me more than the color now. Although this quick fix only cost us $8 and time–so it was the smart decision right now.  I was pleasantly surprised they made oil rubbed bronze in a can. Did you know that? 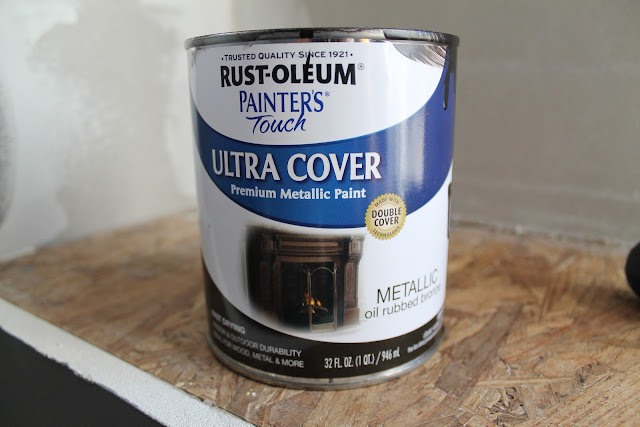 I was unpleasantly surprised it was oil based–especially since there was no sign of it anywhere on the can.  Although I guess the “oil” part in oil rubbed bronze should have given that away.  When we went to clean up our brushes and hands, it became very apparent and that’s when I noticed in fine print on the back to “clean up with mineral spirits.”  Gah.  Okay, the smell tipped me off a bit, too.

The coverage was nice and it is the exact color you would think of.  A sort of metallic brown-black. 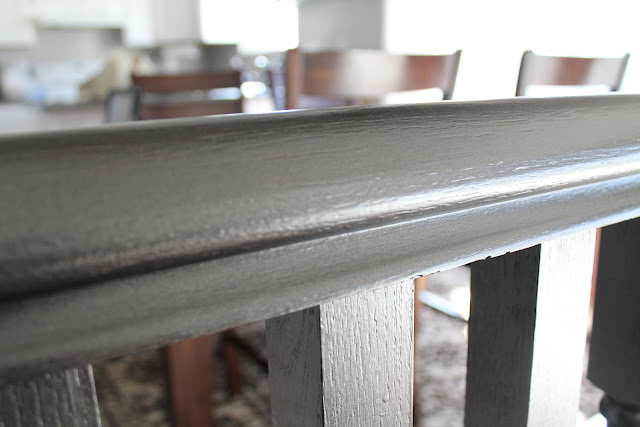 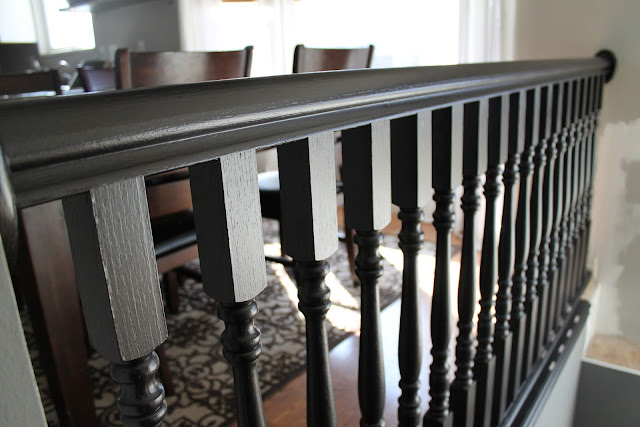 I still haven’t started on the main staircase.  I am admittedly dreading it, but as soon as it is done–you better believe you’ll see the photos.  Here’s a recap of the transitions this little railing has gone through in 9 months: 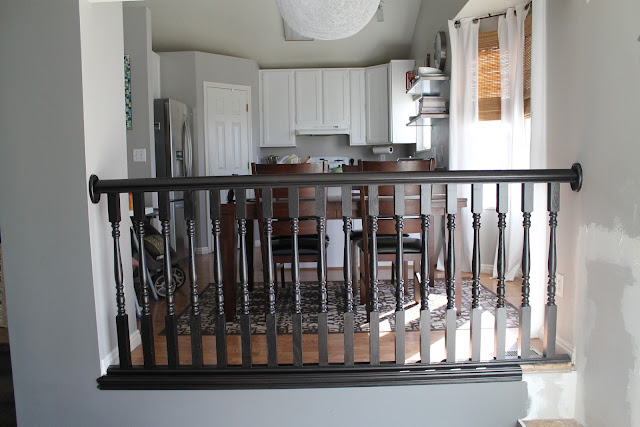 Did we make the right choice? Is it silly to think that oil rubbed bronze paint wouldn’t be oil based?

P.S. Chris’s brother, Brandon, and his wife Stephanie finally put up photos of their new home on their blog.  Take a good look at the before pictures because so much has changed!

Who You Gonna Call »