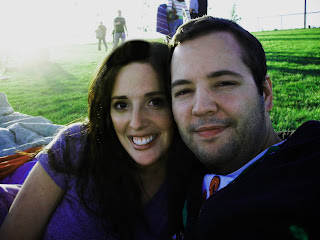 It felt like time rewinded itself last night.  If I didn’t get Chris John Mayer concert tickets for Father’s Day, I would have almost believed that we were still dating.  Almost.  All day I worried about leaving Greta.  At the last minute we decided to bathe her and do her whole nighttime routine an hour earlier.  It worked.  Greta was sound asleep by 5:15pm and Matt came over to keep the house company.  We hadn’t done anything like this since Greta came a long. 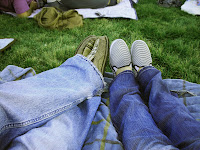 Traffic was bad. I was glad Brandon and Stephanie were on pilot/co-piolet duty because traffic makes me incredibly anxious.  There were still times that I ducked behind Brandon’s seat and held on very tight. Last Sunday, I deemed myself a “Safe-seeker” (as opposed to a thrill-seeker) and I am living up to my title. We got to the amphitheater just as Owl City began playing.  We found a nice spot on the lawn and spread out our blankets.  The air was already getting chilly and in no time we had our sweatshirts on.  After devouring some very over-priced Tuscan chicken sandwiches (imagine a chicken sandwich with a slice of roasted red pepper on it) and a $4 cup of ice-water, Owl City was finishing up.  They were good.  Not too many people were paying attention to them, but they put on a decent show.  Very hip, radio stuff. As it got darker, we got a kick watching all of the ill-dressed girls in mini skirts and tank tops trying to stop their teeth from chattering.  It was in the low 50’s last night.  I am not sure if the beer warmed them up, but I think it helped them forget how cold they were–and there was no shortage of $8 beer.  Once the smell of weed filled the air–so did the sound of John Mayer.

We stood up for a while and danced and sang and then laid back down on our blanket and cuddled and laughed and sang some more.  I realized last night that I am happier than John Mayer.  Granted, he was probably a little drunk and perhaps stoned on top of that–but he just didn’t seem as happy as he should be.  He was really trying to glorify the whole sex, drugs and rock n’ roll and do-whatever-he-wants thing.  Yet, being there, at his concert, with my husband (I love Chris!) without any of those things…I was happy.  Happier than him, I think. 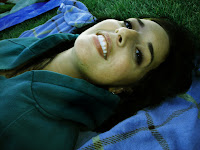 We left a little early to beat the traffic (we’re already turning into our parents).  As we were leaving John was covering Journey’s Don’t Stop Believin’.  I love that song.  There was a little skip in my step and a smile on my face.  It felt like summer, maybe the very last day of summer…but it was a perfect ending.

Our shopping spree, brought to you by…you. »