How to Swap Out a Loose (or Broken) Power Outlet

Thanks for all your opinions this morning about which art you like best. It gives us a lot to think about. To switch gears a little bit, we’ve been homeowners for over 5 years now, and have tackled a lot of big and small renovations. And while major before and afters are by far our most popular posts, the questions we hear most all have to do with the tiny things that go into keeping a home functioning and safe. So we’ve decided to start occasionally sharing some quick (and usually inexpensive) projects that any adult can do themselves to maintain their home. And we’re starting with something that is a frustration to us: loose power outlets. 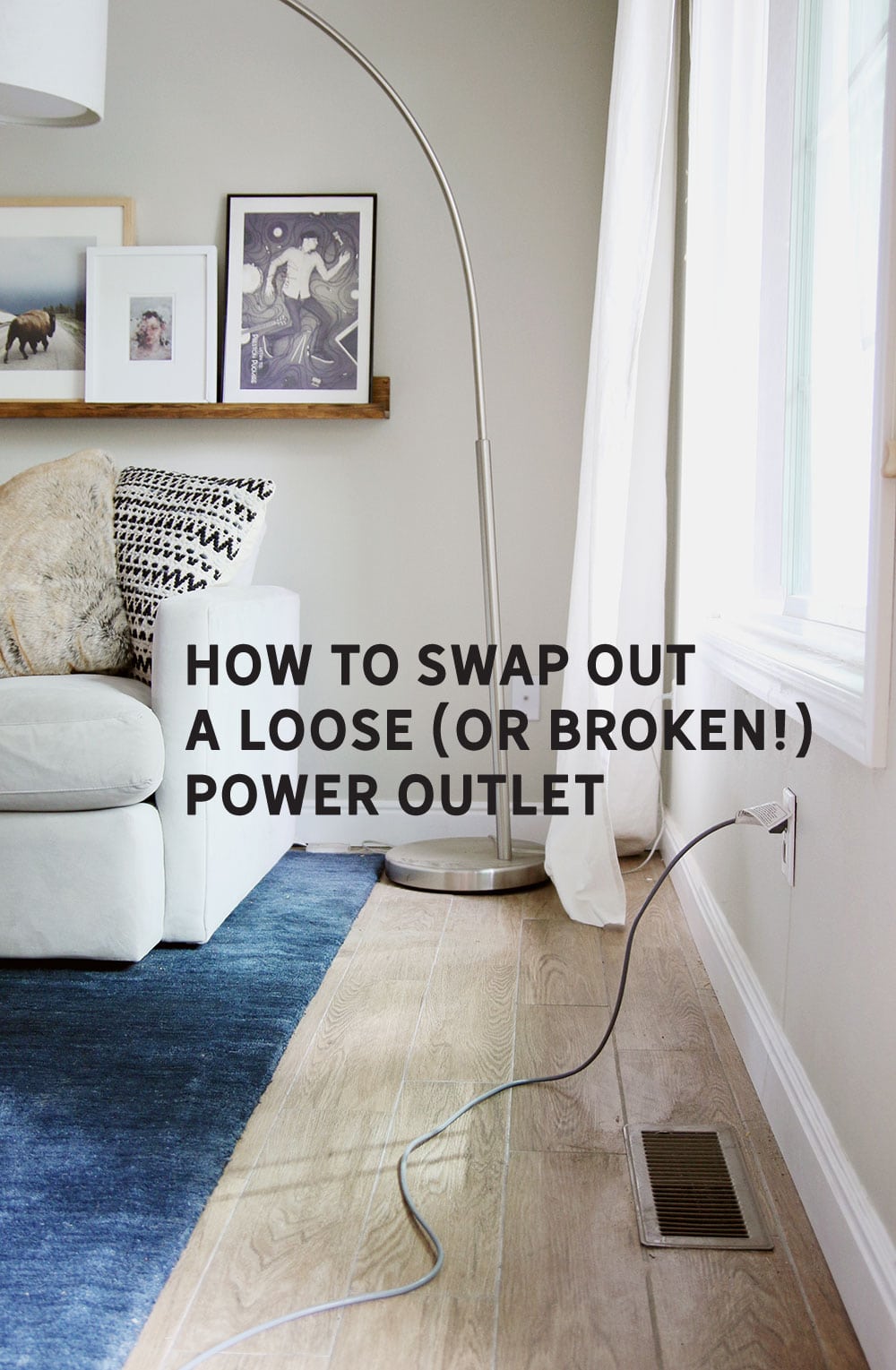 Now, a loose power outlet may seem like a silly thing to be bothered about. Some people just bend the prongs on their appliances or vacuums to get a better hold and make do from there. But a loose power outlet is more than just an inconvenience. If a plug is sitting only part way in an outlet, you could possibly get what’s called arcing, which can trip circuits and even potentially cause a fire. Having plugs firmly in place is important for home safety, and swapping out loose or damaged plugs only takes a few minutes, a couple dollars, and a handful of tools. Here’s what you need:

• Flat head screwdriver
• Wire strippers
• Needle nose pliers (optional)
• New outlet (we’re slowly replacing all of ours with these tamper resistant kind)
• Outlet cover (if the old one is dirty or cracked, or you can just use the old one)
• Headlamp (if the outlet is in a dark room – I prefer the headlamp over a flashlight when I’m doing electrical work, to keep both hands free)

Disclaimer: This tutorial assumes the wiring in your home is updated and true-to-code. If your home has old, knob-and-tube wiring, for example, I would definitely not mess with it yourself and hire a professional. Changing that yourself can cause a whole lot of problems.

1. Turn off the power
First, you need to turn off the electricity to the outlet. If you’ve never worked with electrical stuff, this sounds way more intimidating than it actually is. For real, it’s no sweat. The way I do it is I plug the vacuum into the outlet and turn the vacuum on so I can hear it from the circuit box (which probably looks something like this, to give some reference). If you’re lucky, each circuit in the box will be labeled. Our house, unfortunately, had none of them labeled so we’re figuring them out as we go–perhaps a future home maintenance post? Simply start flipping switches off and on until you hear the the vacuum turn off. Once the vacuum turns off, leave that switch in the “off” position until you’ve finished swapping out the outlet. 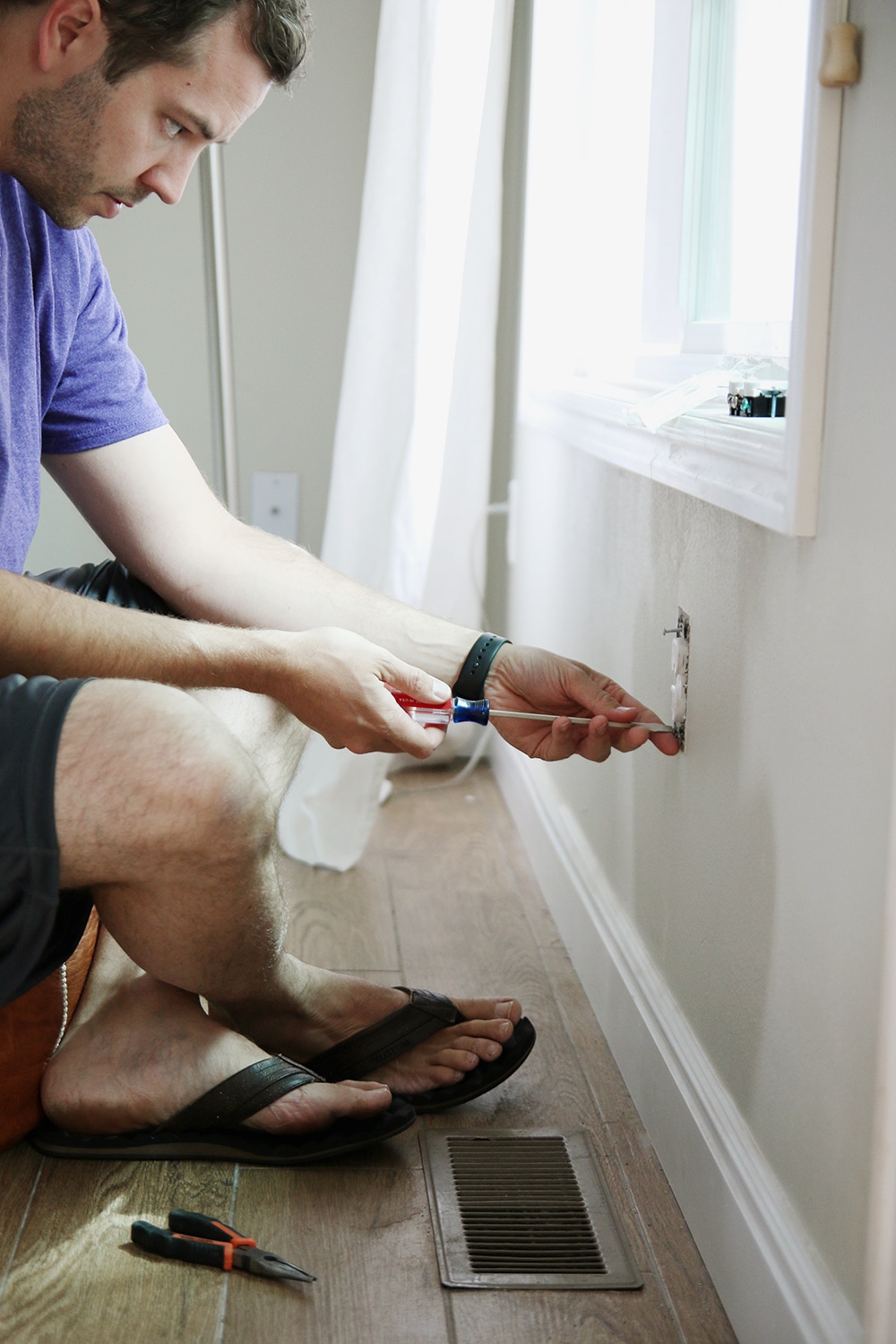 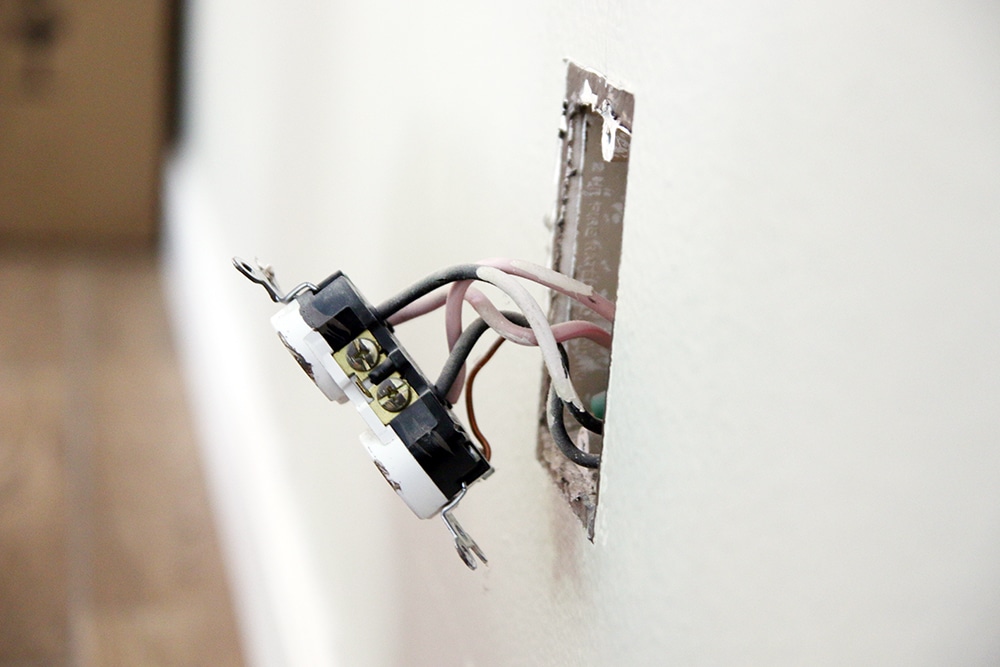 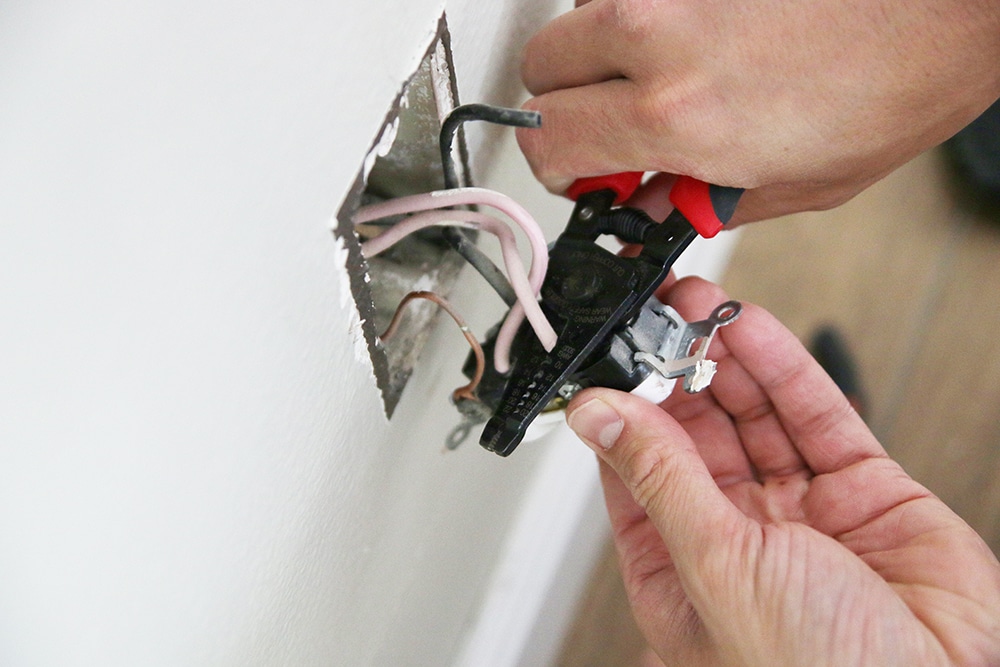 If the wires are wrapped around the screws on the sides, loosen the screws and unwrap the wires. If they are stuck directly into the back of the outlet as seen in the picture above, the easiest thing to do is to snip them off as close to the outlet as you can get.

If there isn’t a lot of wire to work with, snipping it off may be a bad idea. In this instance, you’ll notice a small slot next to each hole that the wires are in. If you stick a small screwdriver or something into that hole the wire will release.

3. Prepare the wires for the new outlet 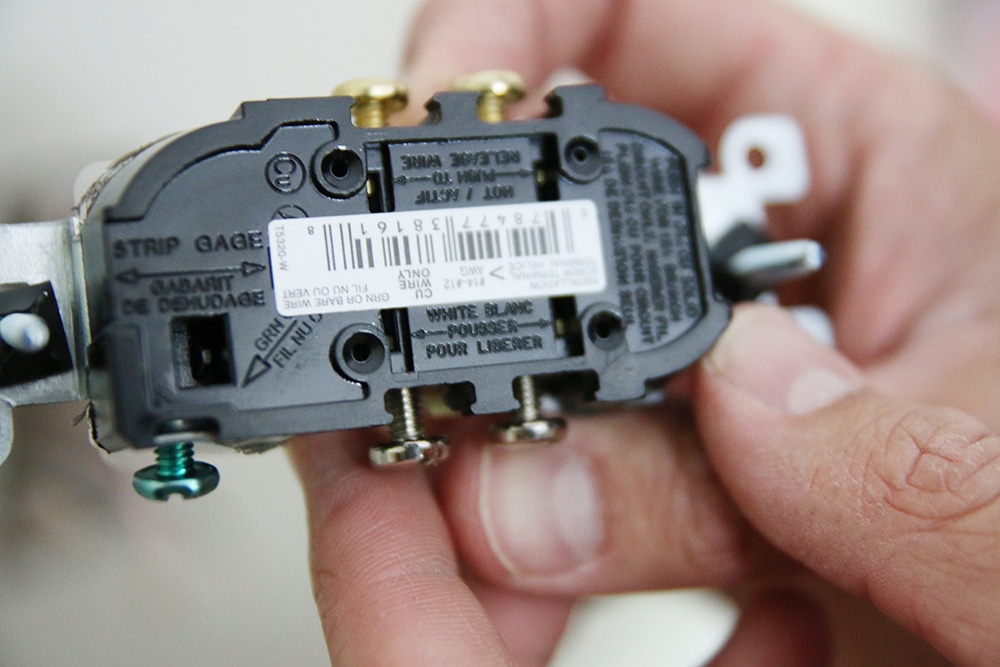 If you look on the back of most new outlets, you’ll notice a couple things. First, the text that corresponds with the various screws. The green screw is always, always the ground and is marked with “GRN” and an arrow pointing to it. The ground wire (the bare, copper wire from the junction box) will wrap around the green screw. The silver screws are labeled “WHITE”, and that will of course be where you put your white wires–ours looked kind of pink, but they still count as white. The black wires, or “hot wires” as they’re called, connect to the gold screws marked “HOT.” You can either connect the wires directly to the screws, or stick them into the holes corresponding with the correct color screws. If you have 2 black and 2 white wires, it doesn’t matter which white wire connects to which silver screw, or which black wire connects to which gold screw. So long as black connects to gold and white connects to silver. Likewise, if you only have one of each color, it doesn’t matter which gold screw the black connects to, or which silver screw the white connects to.

If your wire is small enough to fit in the holes in the back of the outlet, that’s the easiest way to do it and most secure, and I would definitely suggest that. In that case, you would strip about 1/2 inch of the plastic from the end of each wire and feed them into the correct holes. 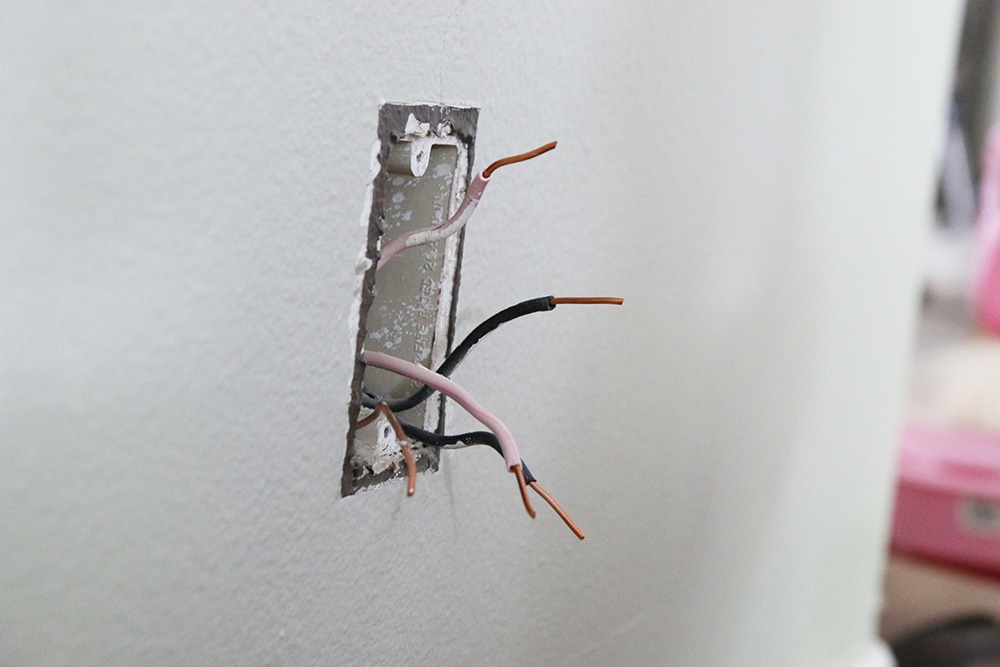 The gauge of our wires was a bit too large to stick in the holes, so for this tutorial I’ll show connecting the wires to the screws. 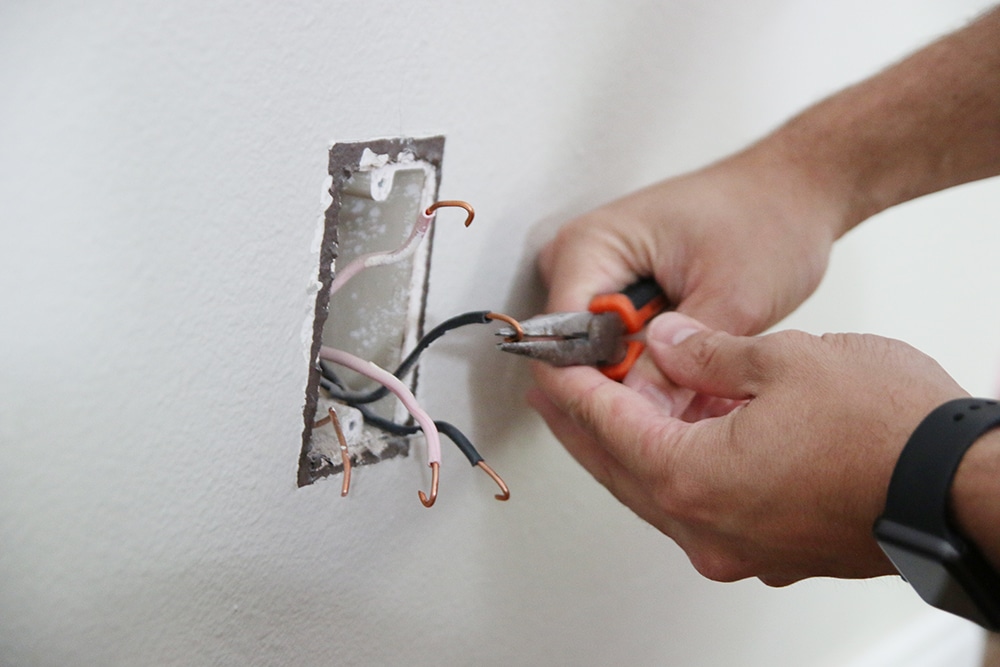 Trim 1/2 of an inch (no more than 3/4 inch) of plastic from the end of each wire with wire strippers, and make a hook using your wire strippers, or my preferred tool, needle nose pliers. 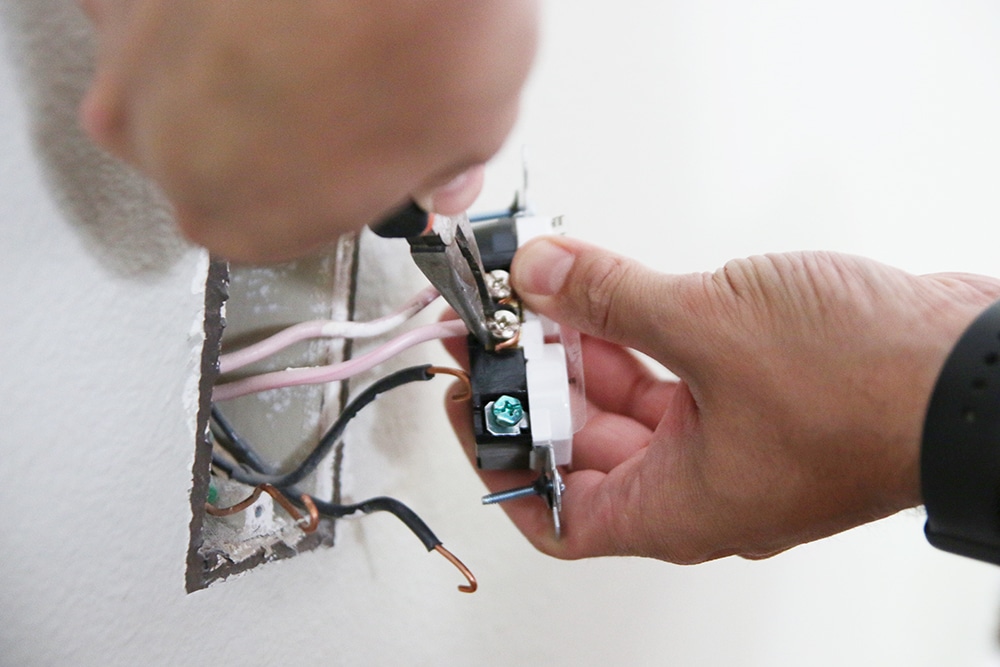 Loosen the screws on the sides of the outlet, and loop each wire around the appropriate screw. Pinch the wire ends together around the screw, otherwise the wire may shift as you tighten the screws. 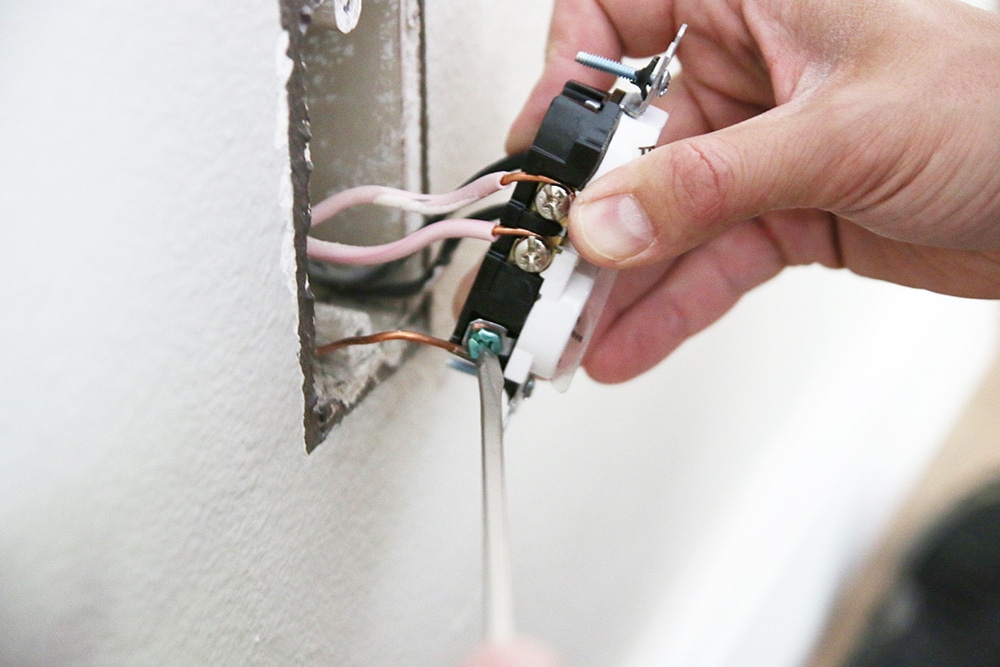 Once the wires are in place, tighten the screws.

5. Secure the outlet and cover 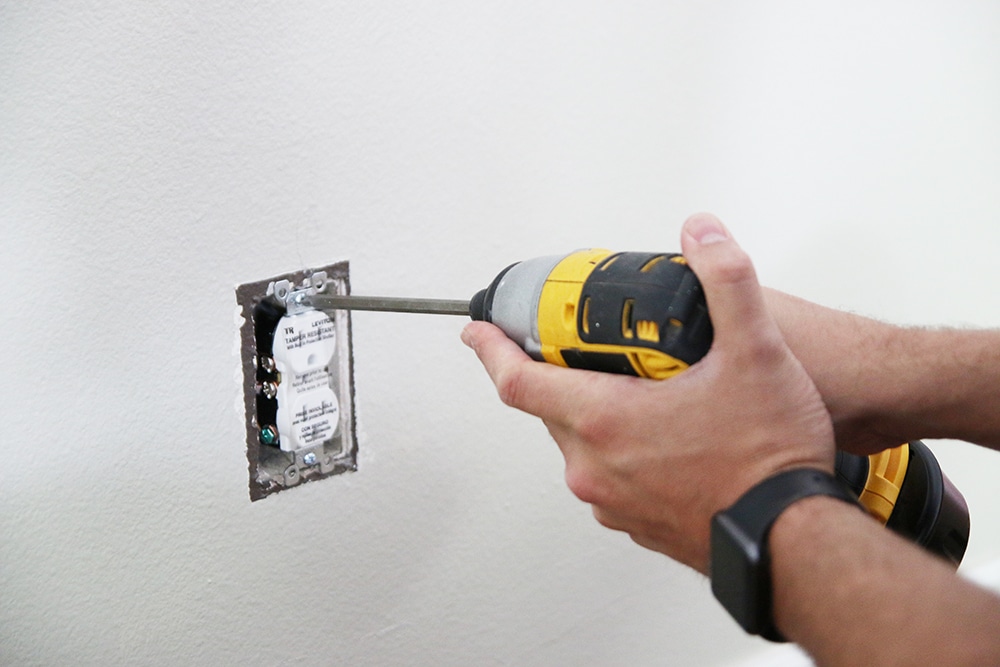 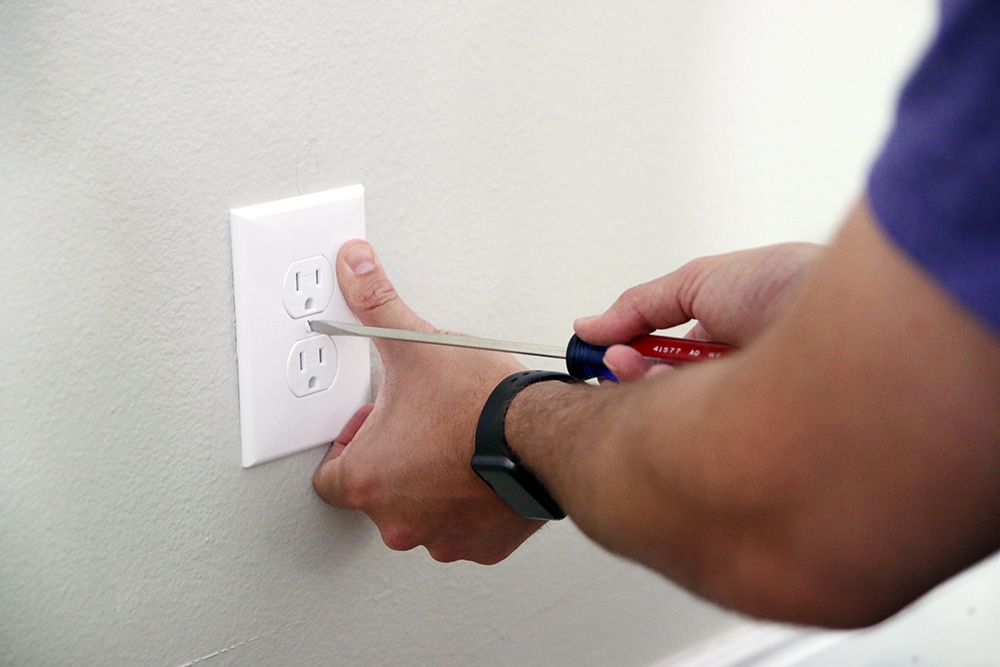 Add the light plate cover, being careful not to screw it in too tight or it could crack.

6. Turn the power back on
Plug the vacuum into the new outlet, make sure it’s turned on, then go to the circuit box and turn the breaker switch back on. If you hear the vacuum start up, you’ve successfully swapped out the outlet and you deserve a snack or something!

There is always the off-chance that you don’t hear the vacuum turn on, or the breaker trips as soon as you flip the switch–if that’s the case, leave it in the off position and check the wires on the outlet to make sure they’re all connecting to the correct screws. If all looks fine and it’s still not working, there’s likely a deeper issue and I would suggest calling a licensed electrician.

We’re looking forward to sharing more of these small maintenance projects on a weekly basis! Hope you are, too!

WEDDING REGISTRY ESSENTIALS: What we would register for today (8 years later) »

« Art Parade On The Range Hood