TOP
We are excited to put Greta to bed early tonight and pass out candy to all of the cute trick-or-treaters in the neighborhood.  We all dressed up for our party on Friday night–Chris was a hobo clown, Greta was a mime and I was a jester. 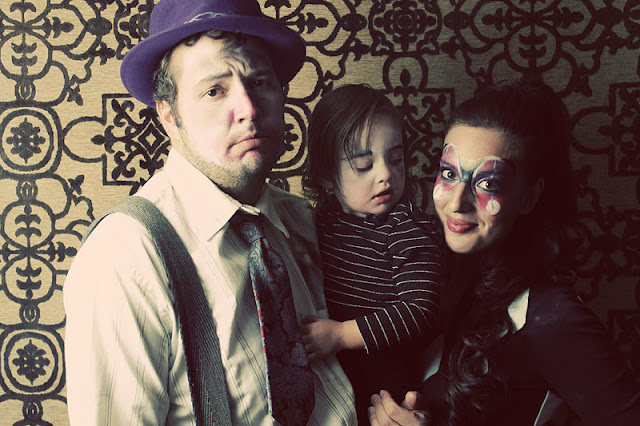 The party was a blast and a success.  It was fun to see all of our friends, family and neighbors dressed up–some I didn’t even recognize, which was especially awkward when I was nearly in tears as a witch was seriously freaking me out and I later found out this witch was Chris’s sister.  What a transformation!  She fully deserved her win of “Best Adult Costume.”  We picked up a 4 best costume trophies for the party and had all of our guests vote on ballots for Best Adult Costume, Best Child’s Costume and Best Group or Couple’s Costume. The fourth trophy Chris and I gave to the person who put the least amount of effort into their costume–for laughs. 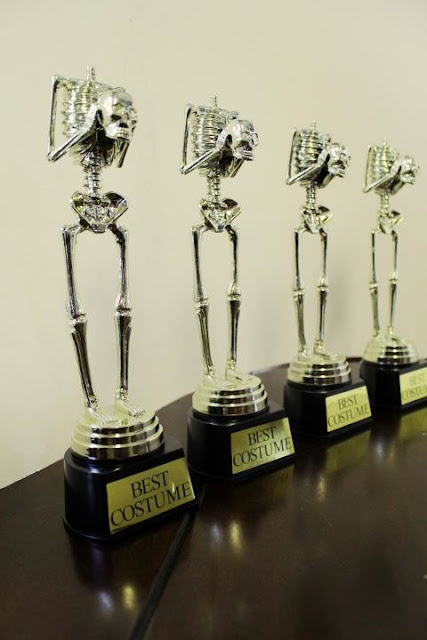 The voting was close, but Erica the witch, Baby Jack as Jack Jack Incredible, the O’Farrells dressed up as the Flinstones and our neighbor boys who threw on a wig and a mask all took home the trophies and posed for a picture. 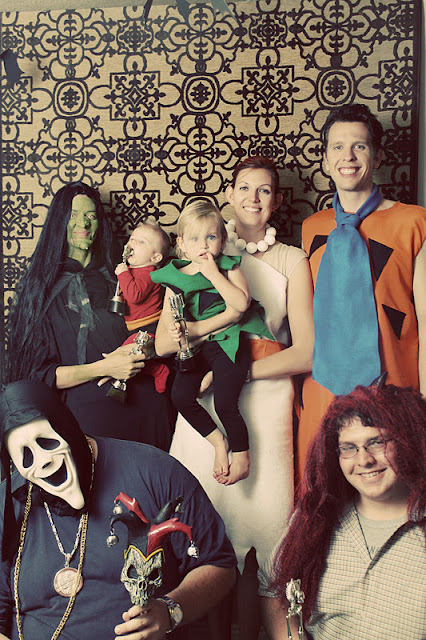 There was lots of picture-taking that night.  We hung up the area rug from our dining room to serve as a  backdrop for our “photo booth.” 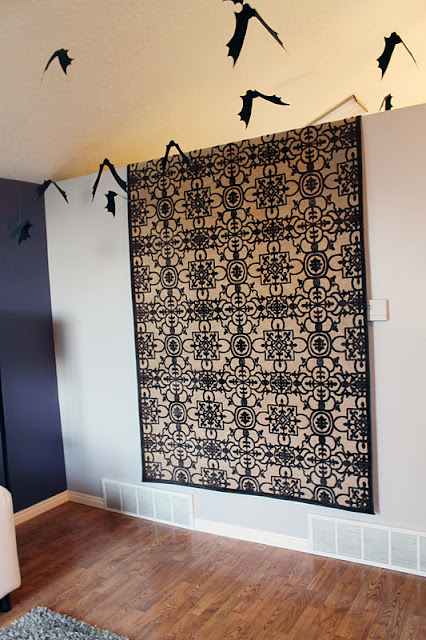 It felt vintage and a little creepy to us and worked pretty well.  The kids especially loved striking a pose in their costumes.  We also hung 50 bats from the ceiling stretching from the living room and into the kitchen.  I cut the bats out of black poster board and strung various lengths of fishing line through them and Chris helped hang each one from the ceiling. 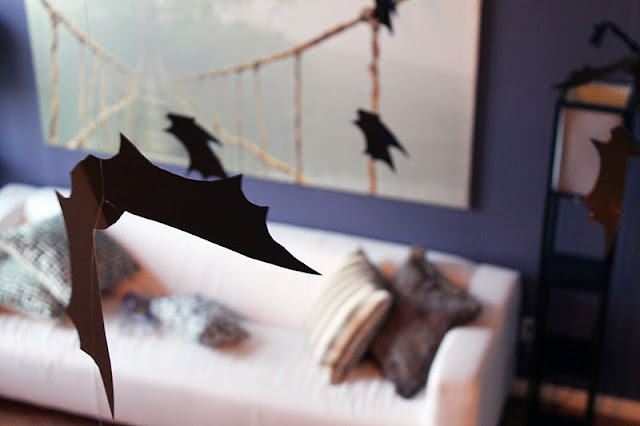 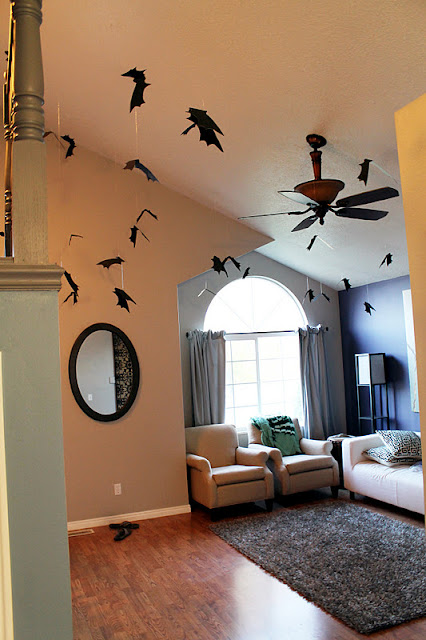 In real life, the effect was really cool, especially when we had the fan on and the bats were all moving around a little bit.  I didn’t get a photo of the food table in time (mostly because we were getting all the food out as people were arriving.  hectic!)  but Chris prepared all sorts of good eats.  We decided to have all dippable things.  Our dips included guacamole, onion dip,  cheese sauce, chocolate hazelnut and caramel–all of which Chris made himself.  Beside the dip we had a spread of black tortilla chips (and regular potato chips, too), sourdough pretzel pieces, angel food cake, cinnamon graham crackers, apples, broccoli, green peppers, asparagus, and wings with a black sauce on them all to dip in the different sauces.  For drinks, Chris whipped up an amazing mulled apple cider and homemade root beer that fogged through most of the party. 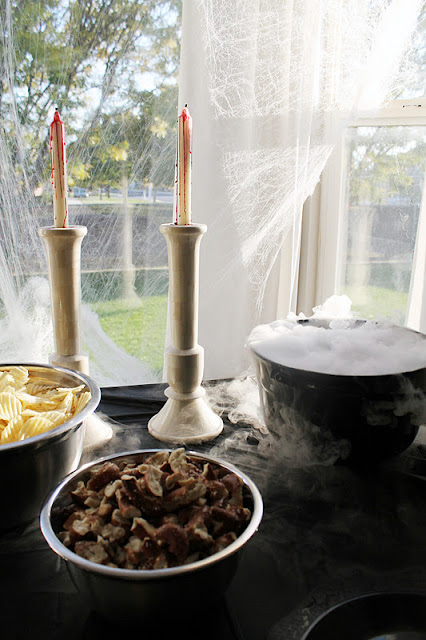 Our little mime was a little freaked out the whole party.  She didn’t let go of Chris or I the entire time.  And an hour or so into the party, it was apparent she was ready to go to bed.  She went straight to sleep (after a quick bath) even with all the noise downstairs. 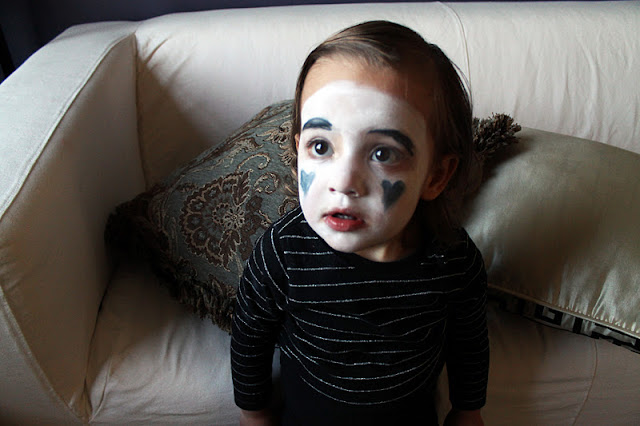 We have no doubt that Halloween–the parties, the costumes, the candy–will grow on her.  Afterall, both of her parents lurrrvveee Halloween.  In fact, we already talked about making the party an annual thing.  How could we pass up the opportunity to dress up, be with our friends and eat good food?  We’ll see you next year, folks! 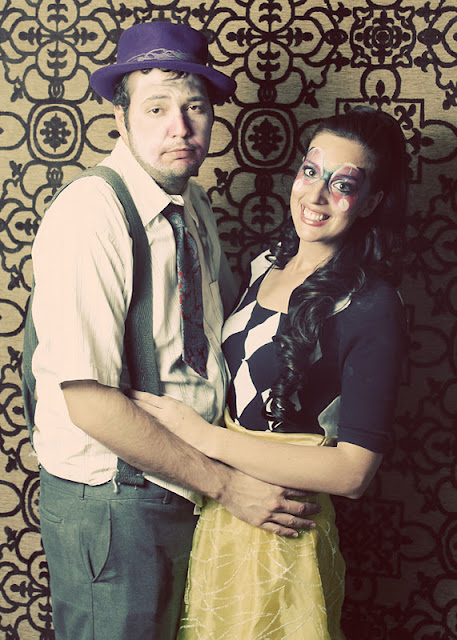