TOP
I can’t have sugar for at least a month and a half, but I found a recipe here for these cookies that almost fit my sugar-free, flour-free diet.  I tweaked it just a bit (more on that later) and was giddy when I took my first bite.  A cookie!  A real cookie!  That I can eat and not get sick!  That you can eat and not get fat!  That’s a win-win-win.
First, to clarify we’re making macaroons, not macarons.  And they look like this: 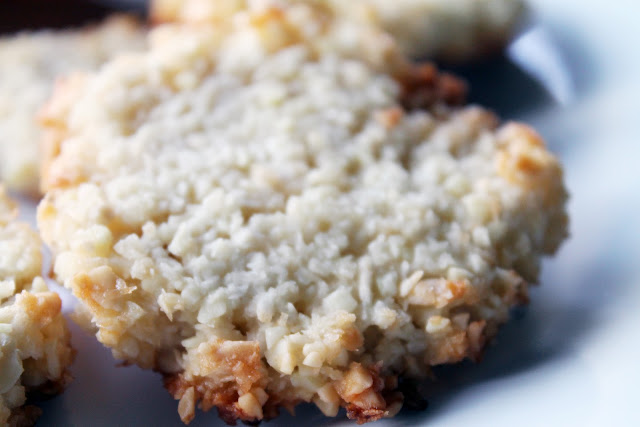 Preheat oven to 325F/170C. Line a baking sheet with parchment paper or use a silicone baking mat.

Use a small food processor or the bowl attachment for an immersion blender to chop the almonds, just until they are ground but still a little chunky. Put the ground almonds, shredded coconut, Xylitol, and salt into a medium-sized bowl and mix together with a spoon.

Separate 2 eggs to get 2 egg whites. (Save the yolks for something else or discard.) Add egg whites, fat-free Greek yogurt, and vanilla to the dry mixture and blend together with a spoon until the ingredients are well-combined.

Scoop out dough one tablespoon at a time and form into a round ball, then place on the baking sheet about 2 inches apart. (I used a metal tablespoon, which worked well.) Use a fork or spoon to press each ball down into a cookie slightly less than 1/2 inch thick. (The cookies don’t spread out much, so don’t worry about that.) I also used the fork to press the edges together because the batter is rather crumbly.

Bake cookies until they are well set and starting to get nicely brown on the edges, about 25-30 minutes. 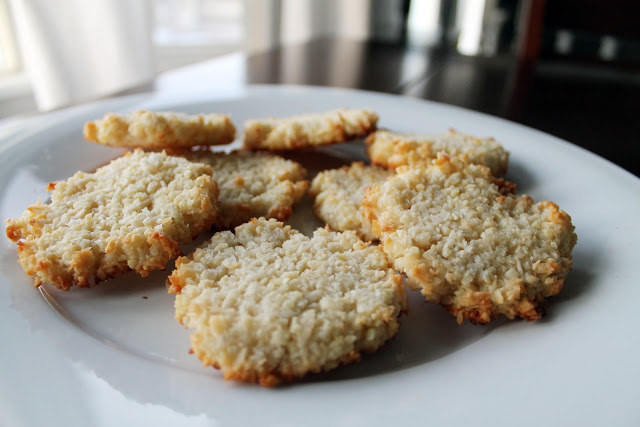 *The original recipe called for “Generous 2/3 cup” slivered almonds.  Well, the slivered almonds in the baking section come in 1 cup bags–so I just went with that.  Easy Peasy.
** Unsweetened shredded coconut is hard to track down in your neighborhood grocery store.  We happened to find some at the Asian market while there, but I know they sell it at any health or natural foods store, as well.
***The original recipe called for Splenda or sugar.  I can’t have sugar or Splenda.  Sugar is around an 80 on the glycemic index.  Splenda?  A 70.  70!!  Might as well just have the sugar and save yourself from all the artificial crap they put in Splenda.  I really wouldn’t recommend the consumption of Splenda to anyone.  I use Stevia, an all natural sweetener, which is a 0 on the glycemic index and Xylitol, also an all natural sweetener suited for baking(find it at your health food store), which is a 7 on the glycemic index.