TOP
The grasscloth is up.  Hallefreakinlujah. You could say we were very naive going into the process.  We figured it would take us about an hour and that would be that.  Ha! We averaged about an hour per panel!  Granted, this was our first time ever dealing with wallpaper–so there was a major learning curve–but we also took our time and took some notes on our experience.
After the first panel got up, we instagrammed it and I texted my friend Kim who has been around the wallpaper block, “Wallpapering. Hard!” She replied (so encouragingly) “but sooo worth it.”  And she was right. 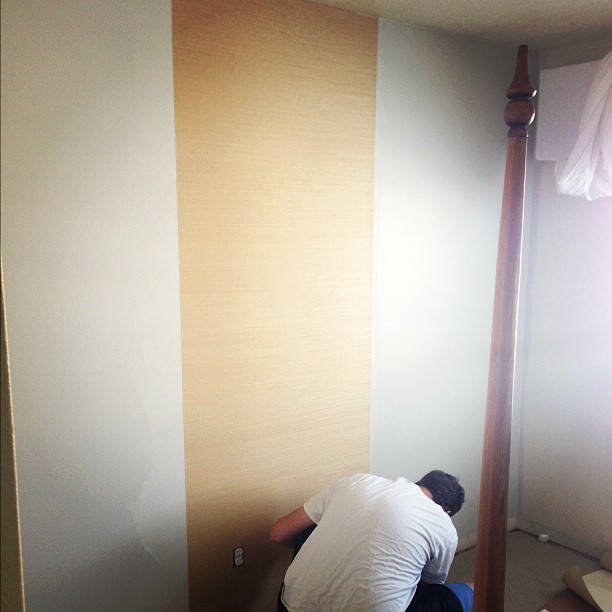 We didn’t get a lot of in progress shots (errr…any) and we generally followed the directions here. But I will say this, when they say the rice paper backing on grasscloth soaks up a lot of glue.  They aren’t lying.  Apply liberally!!  We picked up wallpaper adhesive at Home Depot and an adhesive roller next to the regular paint rollers (did you know those existed?!) and rolled it on the wall just like paint.  Except real thick.

The instructions that came with the grasscloth said not to use a wallpaper smoother (basically a plastic scraper to push out air bubbles) because it could damage it.  So we didn’t pick one up and ended up using our level to go down and push out any (a lot) of air pockets that popped up.  I honestly have no idea how one could get by not using a smoother or whatever they are called.  In our case, a level worked. 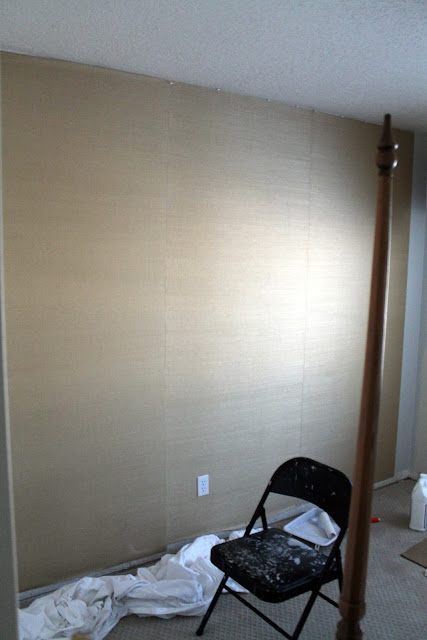 We started in the center of the room to avoid having any seams right in between the posts on Greta’s bed, and worked our way out.  When we were prepping our third panel, we discovered there was no more!  And then laughed and then really realized, Oh–we’re out? That’s can’t be right.  I looked back at the description and realized I read the amount wrong. The good people at Eades Wallpaper sent a double roll (which is 24 ft, although I originally thought a single roll was 24 ft when I ordered a double roll–lost yet?) but since they sent us the grasscloth on their dime, we weren’t about to complain. Since there were just about 7 inches on each side–we decided to trim out the whole wall with molding–just like us to add a project. 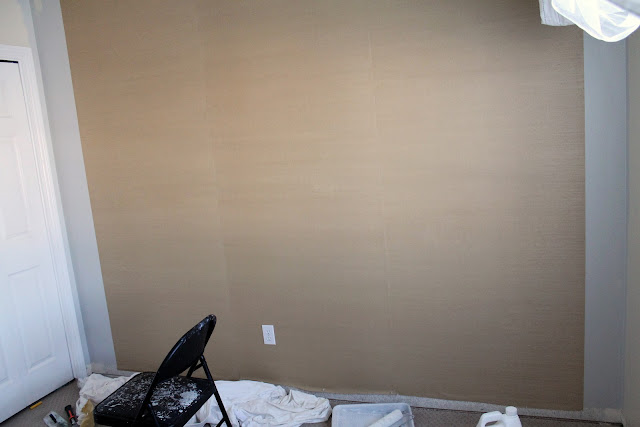 So that’s where we are right now.  The grasscloth is really really pretty. Chris keeps teasing me for staring at it. We couldn’t be happier it is up and done (!!)  and that we can add wallpapered to our DIY resume.  It’s almost feels like a rite of passage. Have you ever wallpapered before?  Although we felt we were a little over our heads at one point while staring at a sea of bubbled grasscloth, we got it smoothed out and now I am with Kim–it is soooo worth it.

Psst.  Eades Wallpaper was an absolute peach for sending us this grasscloth on their dime but didn’t pay us to write a positive review.  The grasscloth is honestly gorgeous and their service was quick and friendly.  My kind of people.

« Which Blogging Method do YOU Prefer?

Trimmed Out and Butterflied. »