We knew after we hung our barn door in the great room, we’d want to frost the windows. The door leads to our future laundry/mud room which sounds like a potentially messy combination even if we plan to add as much storage and organization as we can. And until that point, it’s a construction zone of missing drywall, baseboards and exposed studs. 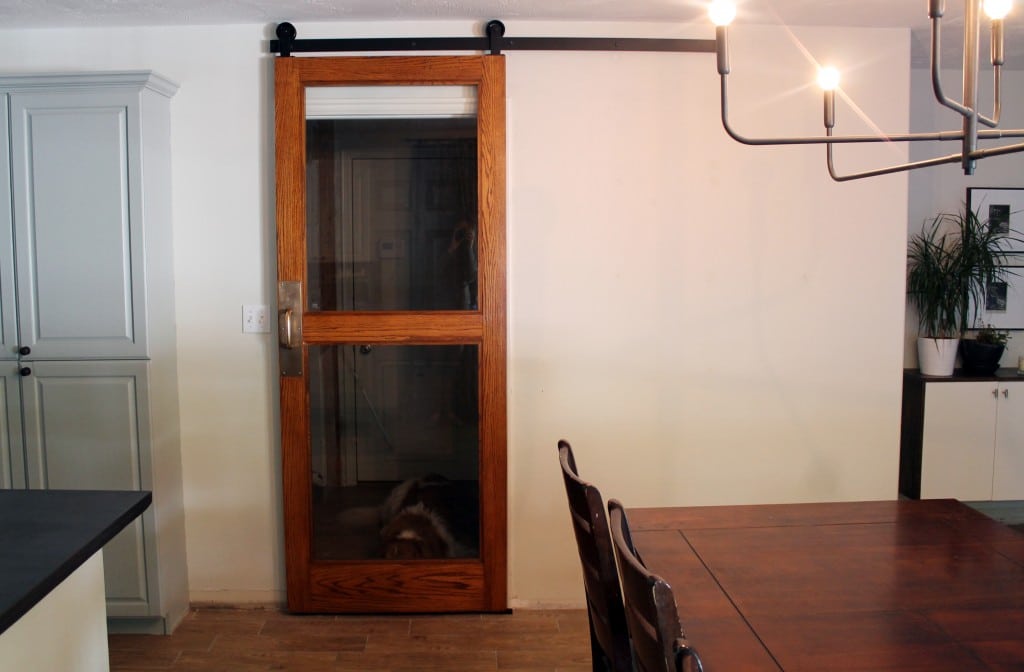 We have used frosted or “etched” window film  (this one!) with great results on our last home’s pantry door. 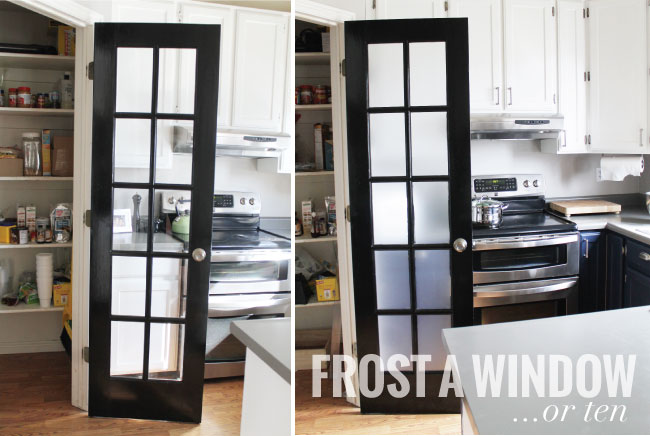 Although I liked the process and result, I felt like it was my duty to try out the other product for doing the job–frosted glass in spray form. 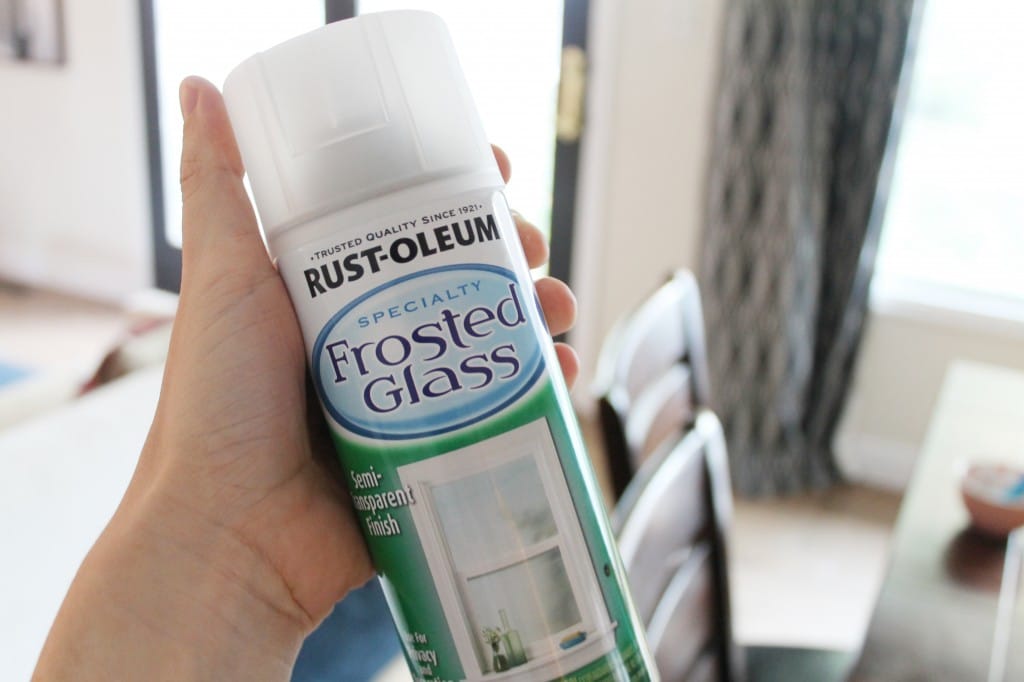 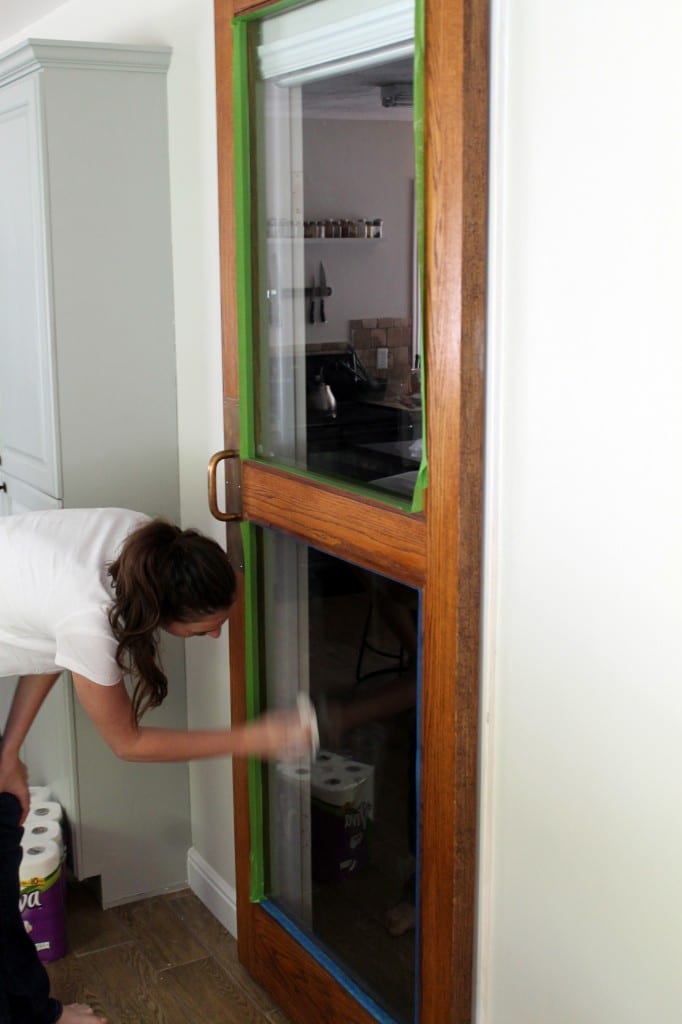 I cleaned the glass thoroughly and taped off the edges of the wood, although I will say that step is completely irrelevant. There was no frosted specs or film that showed up in any of the surrounding area. I did notice the counters and floor looked dusty, but is swept away with just a broom. So this stuff must only stick to glass, unlike spray paints. 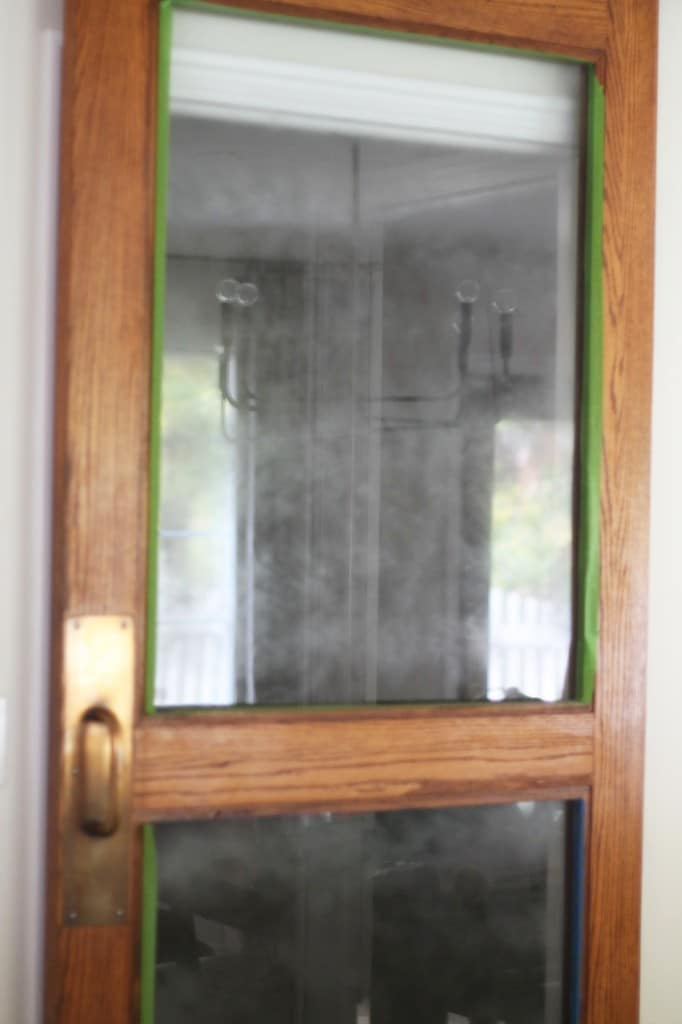 Following the directions, I sprayed even strokes slightly overlapping the lines. The above (pretty blurry, sorry!) photo was after the first coat. The can says that it doesn’t fully frost until 10 minutes but you can re-coat anytime. I layered on two more coats a couple minutes from each other and it still looked splotchy so I decided to wait the full 10 minutes–I waited 20 for good measure–to see how it set up. Please note–this stuff is pungent! It stinks. Strong! Like nail polish times 100. We had all the windows and doors open, but definitely wish we would have done this before hanging the door.

This is a photo I snapped with my phoneafter that period of time. I was really disappointed with the stubborn streakiness! 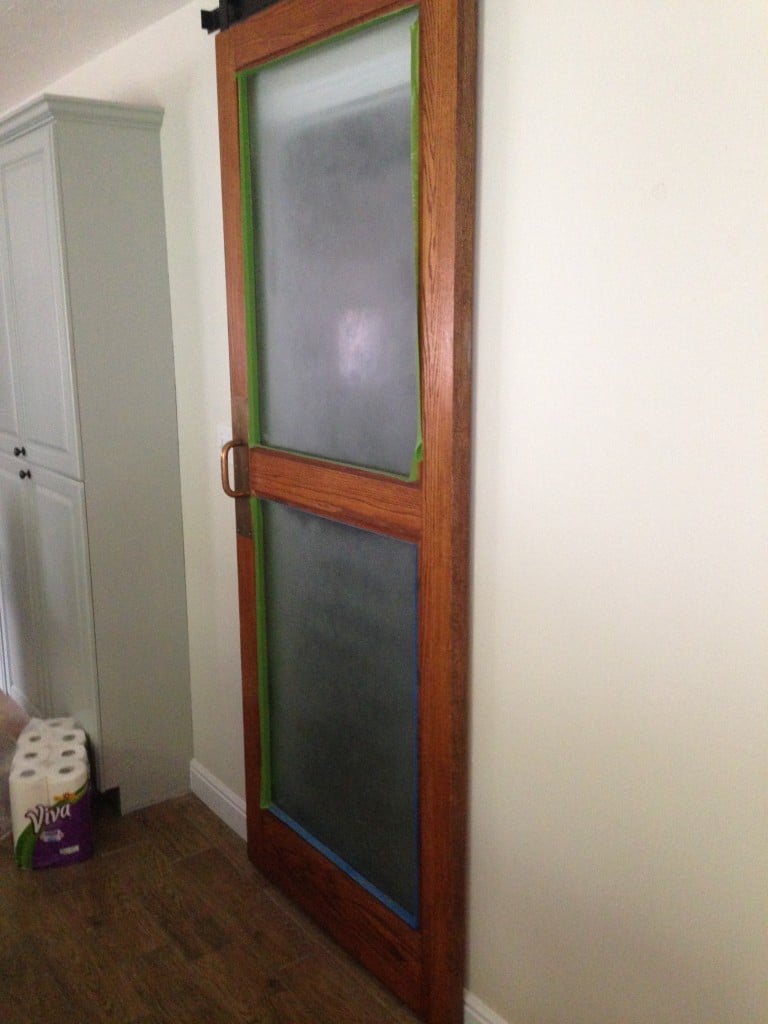 After discussing it over with Chris, we decided to do another coat since it was building coverage each time. Here’s after several coats. 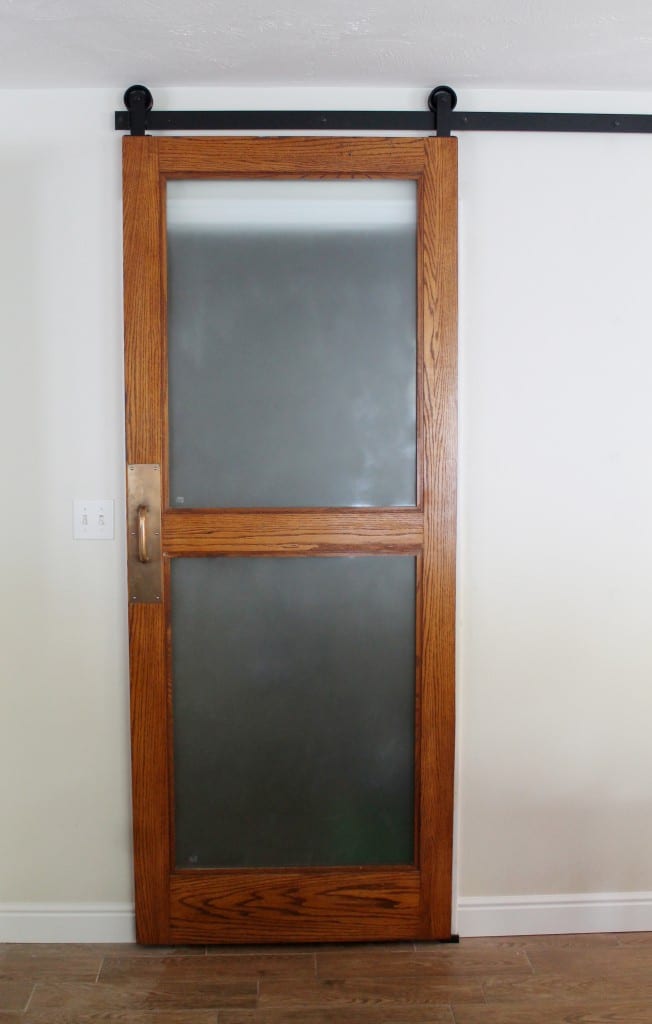 There’s still a definite uneven appearance. In person it doesn’t look quite as splotchy as it does in the above photo. The camera has a way of highlighting that, but even still–such a beautiful door, I’d hate to leave with a less than perfect finish. 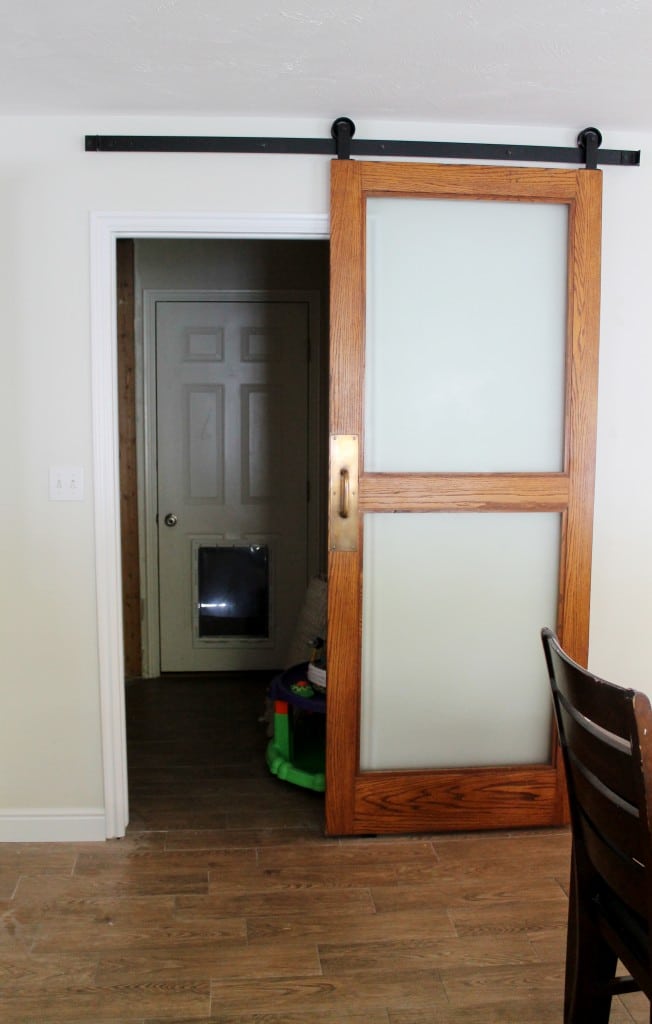 When opened, any blotches or inconsistencies are not detectable at all. I also wanted to post the above photo because in the lower left corner you can see the dust that the spray put off. It really does sweep right up.

Verdict: I would NOT use this product again. We will most likely remove it with paint thinner and use the window film we used in our last house again. I can see someone using this product for a small piece or product that you’d want to frost. Also, the price is cheaper than the window film. But, if you are looking to frost a window, and want something consistent with no smell (!!), I’d stick with the film. 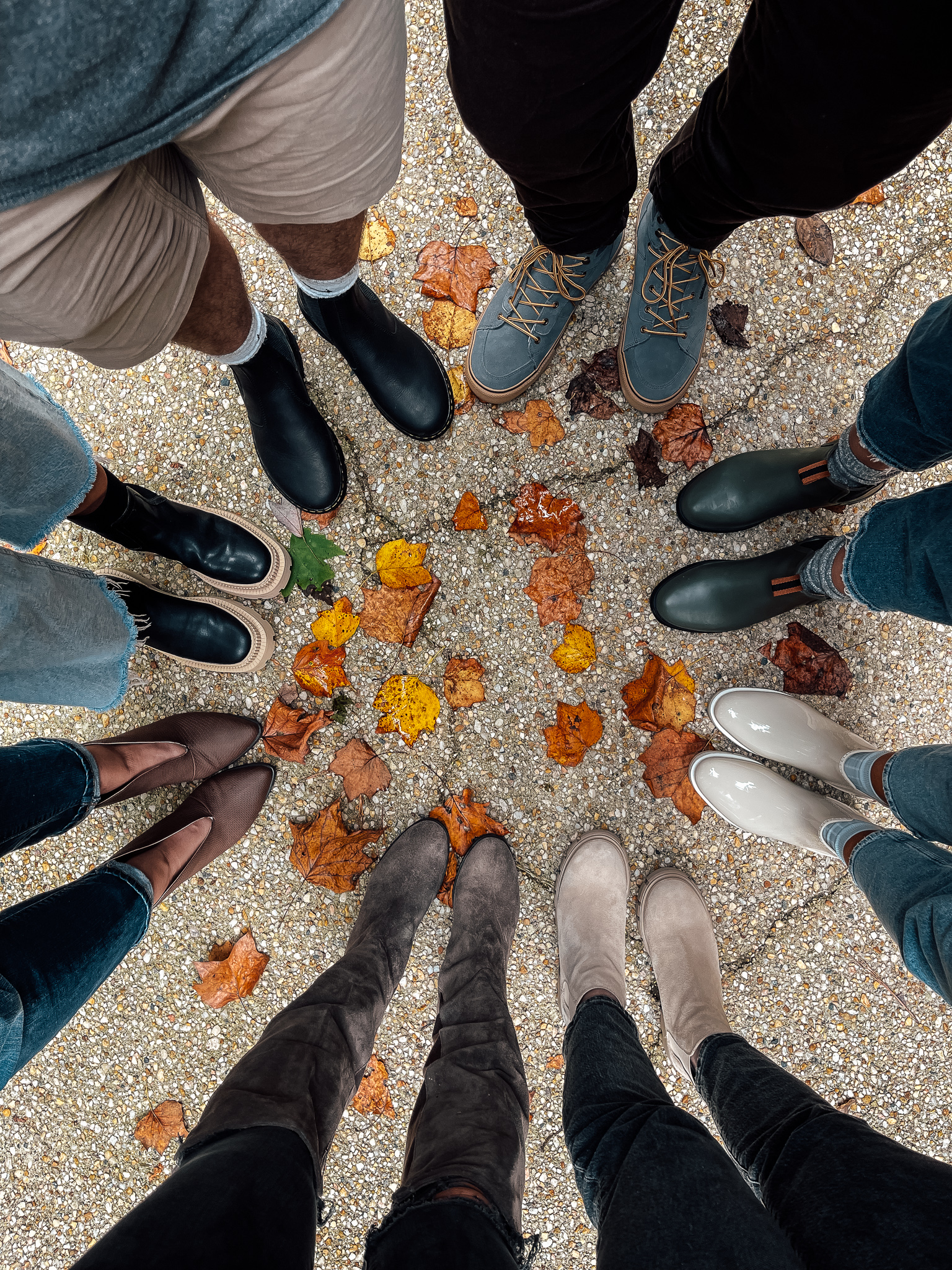